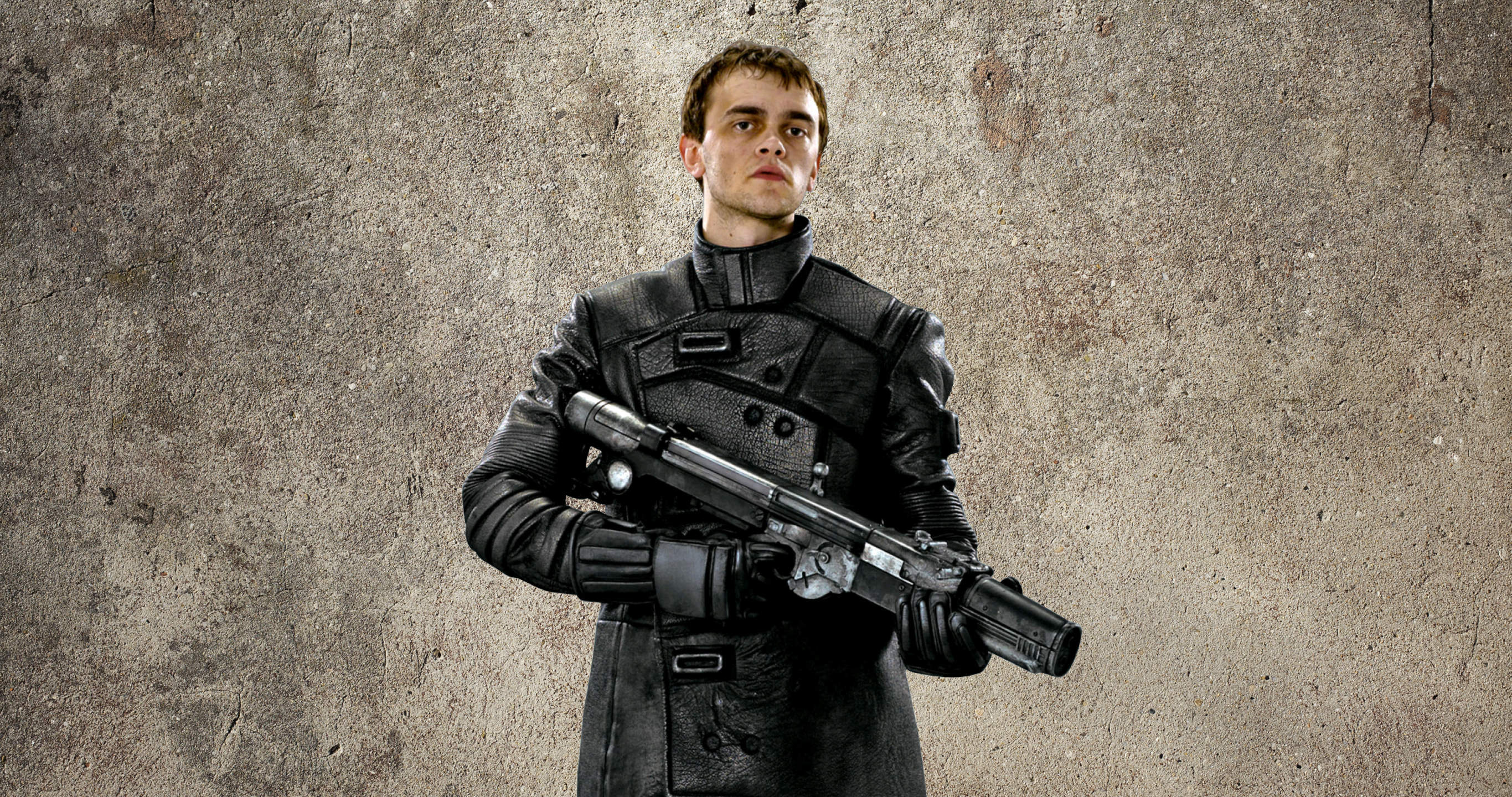 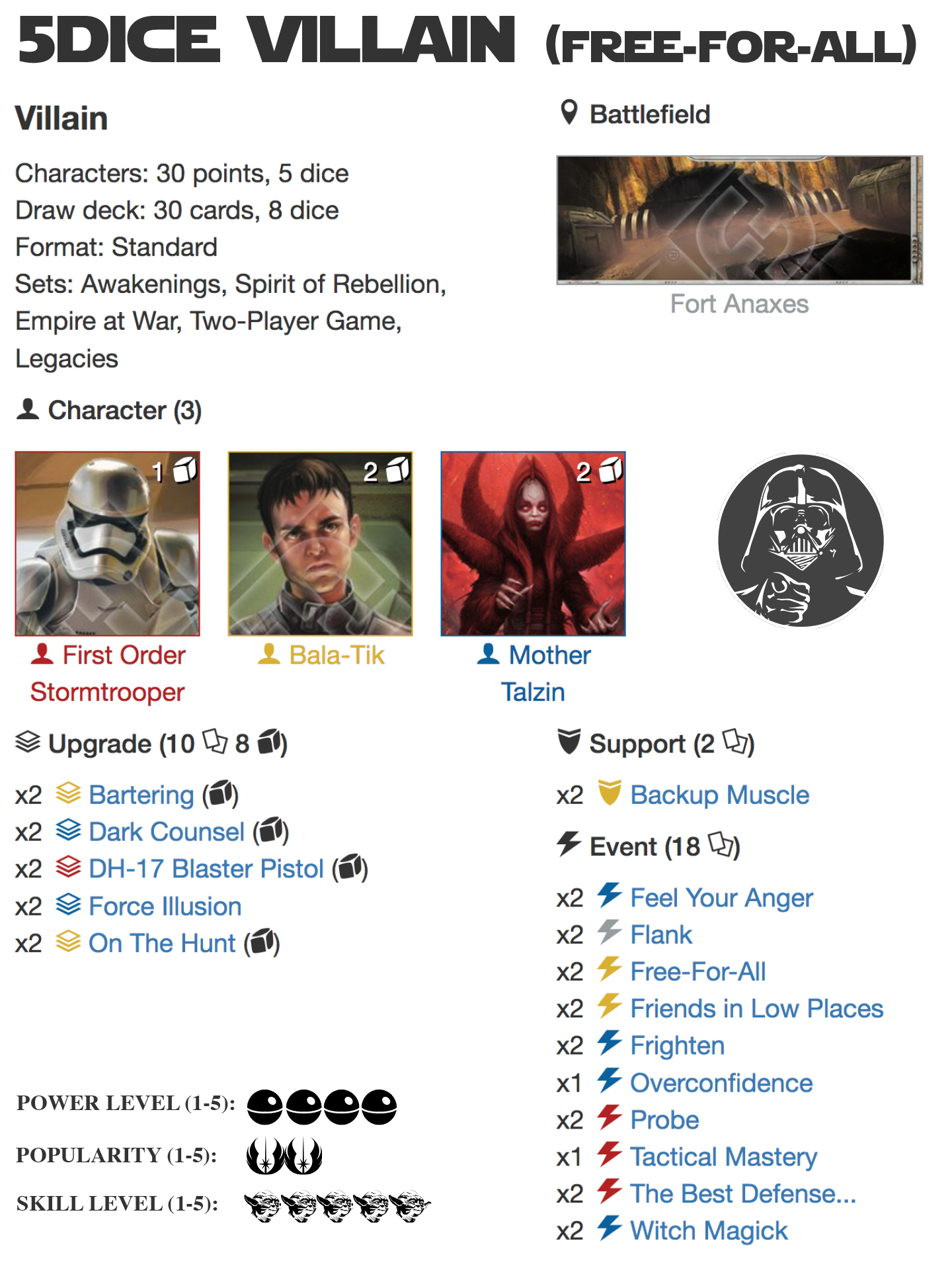 1. CREDITS:
This article is focusing on Jonathan Magnuson's (from Destiny Council) very special take on the 5dice villain deck, which he brought to WORLDS 2018 and bubbled into 17th place with. Jonathan wrote a great write-up on his deck.
2. GENERAL COMMENTS:The 5dice Villain deck basically comes in 2 different shapes, and the game play for each deck varies quite significantly.

The original 5dice Villain (Nightsister/eBala/eCiena) was an upgrade/re-roll/kill deck, and featured heavily in the late Empire at War meta (after the 2player Starter Set had landed). You can hear the YOUR Destiny Podcast Episode 5 for Mads Utzon's thoughts on that iteration of the deck following his Galactic Qualifier Madrid win with it. The deck was essentially all about board state.

The new 5dice villain deck, which this analysis is centered around is about maximizing the effect of Bala-Tik, and although it appears to be a one-trick pony, it does have several tools at its disposal.

As a side note it ought to be mentioned that both versions have the advantage of being fairly cheap, although the original version is the more expensive (because it uses both Holdout Blaster and X8-Nightsniper. The flipside is that both decks are really difficult to pilot!

If I had to evaluate the deck prior to WORLDS 2018, I'd have given it 4.5 in Power Level, but due to some of its power stemming from the surprise element of the deck, I've reduced the evaluation to 4 and kept the pilot level at the same: 4.
3. CHARACTERS

You are essentially running a "2 character deck". The First Order Stormtrooper is functionally a meat shield, although he has a deceptively good die (better than your other character dice) while enabling you to bring red cards in your deck.

Both Mother Talzin and Bala-Tik are incredibly strong finishers, and in early- to midgame both of them fill out distinctly different roles for you. Talzin brings you consistency, which you need in a deck with preciously few upgrades that deals damage and Bala-Tik can just GO OFF big time. We have seen in other iterations of the Rainbow Villain decks how dangerous Bala-Tik can be, and in this version he's made to be the star.

You are looking to trigger Bala-Tik's special ability as early as late round 1 and at the least in the beginning of round 2. Your priority is therefor obviously to protect Bala. The presence of Mother Talzin can against inexperienced players serve as a deterrent for Bala, but most players will be wary of the danger of Bala and kill him off as quickly as possible - at least they'll try. You have two (2!!!) weapon upgrades in your deck, luckily it's the best in the game, so be aware that astute opponents might simply wait until you've deployed your DH-17 Blaster Pistol to choose their first target! Guess who?!

In order to facilitate Mother Talzin's ability your deck consists of 26 odd cost cards (all 1 cost) and 4 even cost (all 0 cost), and while it ensures consistency, it also means that sacrifices have been made. You are definitely missing out on cards that are considered staples in rainbow villain decks. I am not entirely sure we are looking at the final and best version of this deck (as of Legacies).

The distribution of cards (10 upgrades - including 2 Force Illusions - 2 Supports and 18 events) also reveals a lot about the deck. This is a reactive, slow-rolling and patient deck. You are looking to tire your opponent down, and then strike. Because you have 5 character dice you can afford to bide your time, and afford to lose one or two to mitigation in the process. As an added bonus you are at: 10 yellow / 7 red / 11 blue / 2 grey cards, if you are worrying about Kylo Ren!

THE BALA RE-ACTIVATION
Do remember that when you get the Bala reactivation it's important you get the sequencing right. Leave dice in the pool that will improve your dice (when you roll Bala's dice into the pool again), that means Focus sides stay unless they can be used to focus dice already in the pool. Only ever re-roll blanks, and only if you have cards to spare!
4. UPGRADES & SUPPORTS:The upgrade package can essentially be divided into two groups: DOERS and ENABLERS.

DOERS:
Are the cards that deals damage, and there are few of them.

DH-17 BLASTER PISTOL:
Comparatively THE BEST weapon upgrade in the game. The incredibly high ceiling at the cost of 1 resource is outstanding. It's conversely low floor is off set by the fact that you have 4 focuses on 4 character dice as well as 6 focuses on 4 upgrade dice (2 on each Dark Counsel die and 1 on each Bartering die), add to this the activation focus of Mother Talzin and you are looking at a very very consistent DH-17 Blaster.

ON THE HUNT:
In this deck it essentially has 1 Ranged side (+1 ranged) and 2 Damage sides (0-3 damage), 1 Discard and 2 Blanks. There is no base damage side for the +1 Melee side, but in a shield heavy meta the Special is going to average 1.5 damage. If you have the resource to spare it can even be mitigation. Only downside to the mitigation aspect is that you are normally somewhat a passive/slow deck, which means that more often than not, your opponent will have resolved the best dice in the pool.

BACKUP MUSCLE:
Sometimes I hear people hating on Backup Muscle, and even considering cutting it from decks. DON'T!! Backup Muscle is incredible! 3 damage in 3 turns might just be what you need to trigger the Bala-Tik reactivation, and played late in a turn (maybe drawn after a Dark Counsel Special) it's a killer to even the best laid plans from your opponent.

ENABLERS:
Are the cards that will setup your other dice in order to meet your win condition. They allow you to gain Resources (Bartering), which is important in your attempt to keep Bala alive (remember that ALL your mitigation is 1 cost), Focus into Ranged damage sides (Bartering and Dark Counsel) or draw cards that can be pitched to re-roll (Dark Counsel).

The dice sides might not have any damage to them, but they will ultimately facilitate your win condition.
5. EVENTS:Your Event suite is huge, counting in the 2 Force Illusion you are running at 20 events! That's 2/3 of your deck, and all but 4 cards cost 1 resource (you see why you need Bartering?). 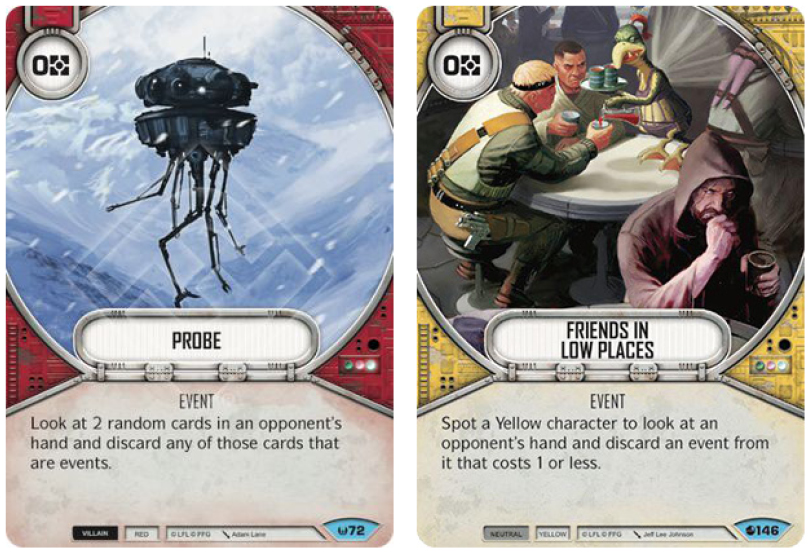 0 COST MITIGATION:
You will definitely want to see 1 of these cards in your starting hand. They are not only great at making sure your opponent won't be mitigating your dice, they are also going to be annoying drawing into with Mother Talzin's trigger or Witch Magick. Play Friends in Low Places early while Probe has to be played late. The latter shines when your opponent has played his first upgrade, while FiLP gives you access to vital information about your opponent's hand.

1 COST MITIGATION:
Most of your mitigation is straight forward! You should think of both Force Illusion and Witch Magick as mitigation - pure and simple. Don't get your sequencing wrong with either. Often it is worth healing Bala for 2 rather than wait on him to take more damage to get the 3 heal effect.

The only "spot x" mitigation cards you have are Overconfidence (1) and The Best Defense (2), while the latter isn't "spot x", it requires a red character in play to actually use it.

TECH CARDS:
Frighten can be 3 damage out of hand, and because it has Ambush, it can set up some nasty kills, while Tactical Mastery (spot Red) can be another stepping stone to a kill out of nowhere (in particular because of Mother Talzin's activation focus and the many Focus sides in your deck).

FREE-FOR-ALL:
The card was so important to the author of the deck Jonathan Magnuson, that he even named the deck after it, and rightly so ...

You have a potential 13 dice in your pool. That's obviously never going to happen, but 4 or 5 Indirect damage off a Free-for-all still makes it worthwhile. In particular if it's blanks or unusable dice from Bartering or Dark Counsel. It essentially turns any of your die sides into 1 damage, which then makes up for the fact that you are a bit weak on damage sides. It can make for some devastating plays. Play the Free-for-All when you have the chance and it seems opportune. Don't get greedy! It doesn't have to be lethal damage to be effective. 4 Indirect damage can most of the time be exactly what you need!
6. MULLIGANS:You want to see an upgrade (preferably 1. DH-17, 2. Dark Counsel, 3. On the Hunt), at LEAST 1 of your 0cost cards (Probe, FiLP) and 2 mitigation cards in your starting hand (as a protection against FiLP since your characters are all low health and needs the extra protection).
7. ROUNDING OFF:

Fort Anaxes as choice Battlefield was popularized with BrOTK (to my knowledge), and is also a natural choice in this 3-wide deck. Question is: "When is it NOT to you advantage to choose your battlefield?". Very often the 2 shields are going to look very tempting, but in some instances the advantages of chosing your own battlefield is outweighed by circumstance. Remember to split up the shields between Bala-Tik and Mother Talzin if you're playing against blue villain decks using Frighten/Intimidate.

My advice: Against any deck playing Hyperspace Jump, choose their battlefield. In most other instances I'd probably choose Fort Anaxes. The ability to distribute damage amongst your characters as you like can be a real game winner.