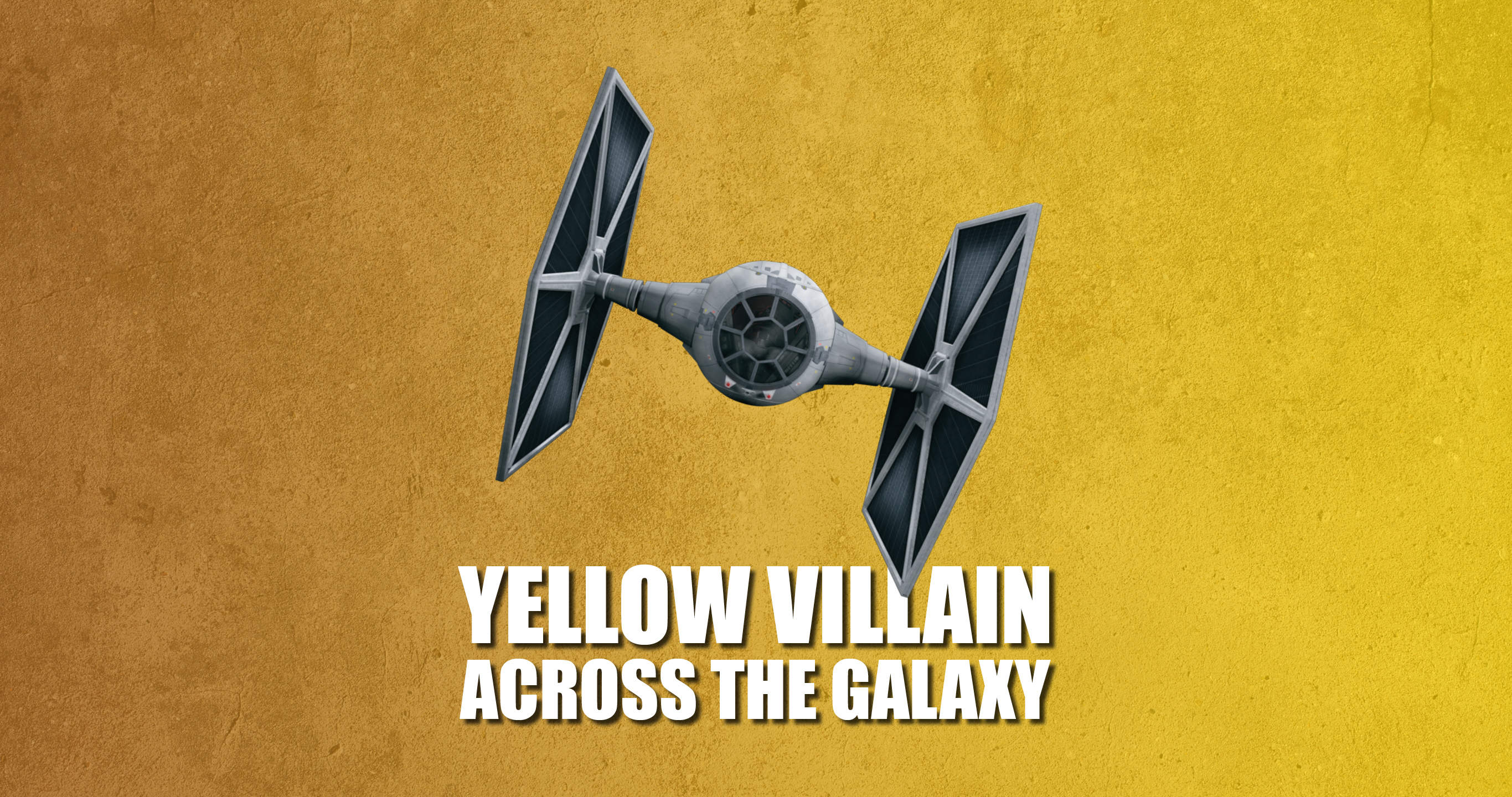 There are links to all the other parts of the set review at the end of this article!
1. YELLOW VILLAIN CARDS:In my opinion Villain Yellow didn't really get anything too crazy this set that will push it in a new direction, or enable things previously off limits (unless Deja Vu breaks through). My eyes are on Firespray and Dryden to do degenerate things in standard if they can get off the ground and into good decks. I would be remiss to not mention Sidestep, which might give Yellow aggro decks a better chance against vehicle decks, but only time will tell.2. YELLOW VILLAIN CHARACTERS:

DRYDEN VOS (4/5)
Man this guy’s die sides are actually gross. If you can figure out the right way to abuse his Special with deck composition, which will have to be some mix of 3+ drops to be worth his point investment, he should be pretty good if not great. Remember he has got two Melee sides on him too so he can hit like a house if he doesn’t feel like messing with his Special.

TOBIAS BECKETT (2/5)
I had to really think about this card for a while before coming a conclusion I was comfortable with. I like that he gains a resource for free every turn, and although he gives one to your opponent too I can mostly forgive that as your deck will be built with this effect in mind and your opponents will not. This should lead to you playing more powerful cards on the whole compared to your opponent.

However, at the end of the day my opinion is that Tobias’ die sides just aren’t that great. I really don’t want to be using that power action to pay for 3 damage, and just having 1 other damage side, and an average one at that isn’t too hot. His Special is not terrible, but the single Focus is. I want to like this guy, but I can’t. He will be fun for more casual decks, but in competitive I don’t see him working out.

VAL (3/5)
It’s nice that she is only 14 points at elite and if anything that will get her to see play. Her die is okay with two 2 damage sides plus the Resource, Discard and Special. The Special is interesting, as it doesn’t give a choice like Hondo, but it also won’t hit as hard as Hondo at only 2 damage. She might see play, but I doubt it.
3. YELLOW VILLAIN EVENTS:

ACT OF CRUELTY (4/5)
It’s hard to get a good read on this card, it’s sort of worse than backup muscle, but it is also instantaneous and hits multiple characters. I’m going to take a gamble and say it’ll be good!

CUNNING RUSE (3/5)
Uh, I’m not actually sure if this is completely unplayable or just sick tech waiting for Vader3. I’m going to bet on the lower side of playability for now, but I will keep in mind it has the potential to spike a lot more than the traditional 2 damage you get for paying one resource if big characters become meta. 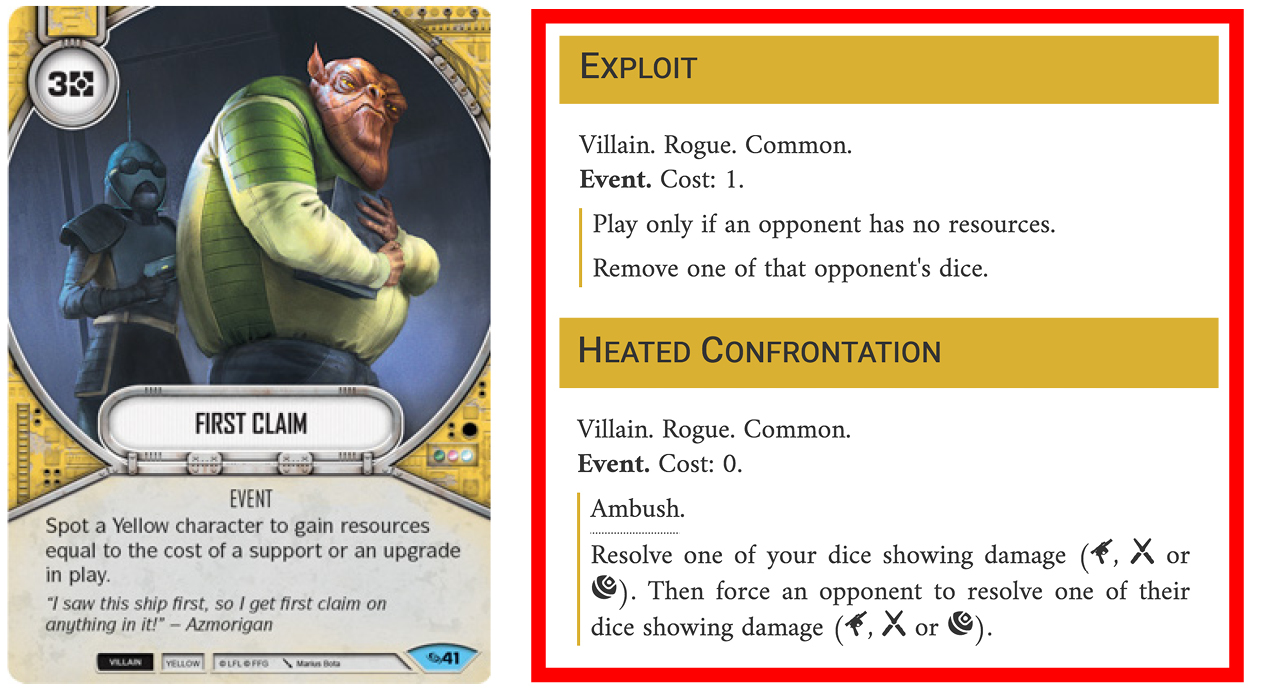 EXPLOIT (0/5)
A bit too conditional for it to be worthwhile. A card like this could never truly be great due to how easy it is to play around in the first place, but there are so many better 1 for 1 removal cards to run right now I wouldn’t bother with this one in the first place.

FIRST CLAIM (1/5)
A strong effect that probably costs too much. At 3 and below you have wasted a card, at 4 you have played a very situational card to get just 1 resource, and only at 5+ it becomes good (if you can get to 3 resources first, which is its own challenge). Seems like it won’t work out often enough to justify a slot in your deck

HEATED CONFRONTATION (1/5)
This card seems like it is really only useful when you want to mix damage types for a quick kill, but how often does that really happen? Occasionally you might be able to use it to force a character to resolve a die side that they would not prefer to but… eh.

IN A BIND (3/5)
Oooh we now have modal cards (cards with a multiple effects from multiple choices) in Destiny. Unfortunately, your opponent gets to choose what the options are, and we all know how that goes. This card is cool, but I don’t think it is great. 2 Indirect isn’t really a lot, so I expect that choice to be chosen the most.

So really it’s just a question of how good discarding 2 or removing 2 dice will be, and remember it costs 2 resources which is a lot. It might be like an entangle with upside towards the end of the game when your opponent is down to one character, but before then I think it will only be mediocre. I’m ready to be wrong though, it’s hard to evaluate how modal cards will work out in Destiny. This kind of card definitely has my excited for the future of Destiny though!

SHAKEDOWN (3/5)
We all know that free removal is strong, but I worry about there being enough competitive dice with enough disrupts to enable this. It should be good if it can make it happen, but it is still hamstrung by this requirement. 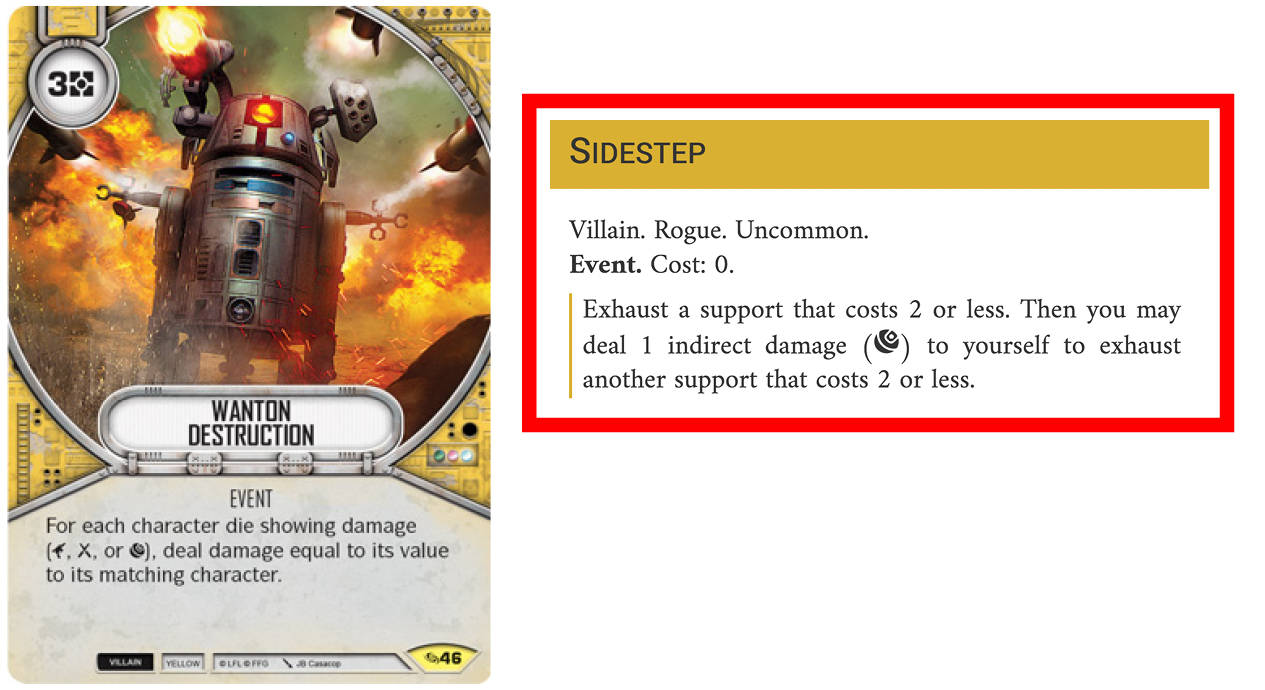 SIDESTEP (4/5)
This card is pretty sweet, it lets you gain a good bit of tempo against Vehicle decks, especially the 2 drop rich Hero Vehicles. If the meta becomes heavy vehicles, which I suspect it will, this should be solid, as its 2 for 1 ability provides solid value. Should be pretty awesome with Doctor Aphra and will be decisive in Aphra mirrors!

WANTON DESTRUCTION (1/5)
The art is great, actually it’s MUCH better than the card itself. It is too expensive for what it does in my opinion, and it also requires your opponent to roll well for it to be good. If you aren’t finishing your opponent with this card, I think you would be better off mitigating their high rolls than trading damage with it.
4. YELLOW VILLAIN SUPPORT: 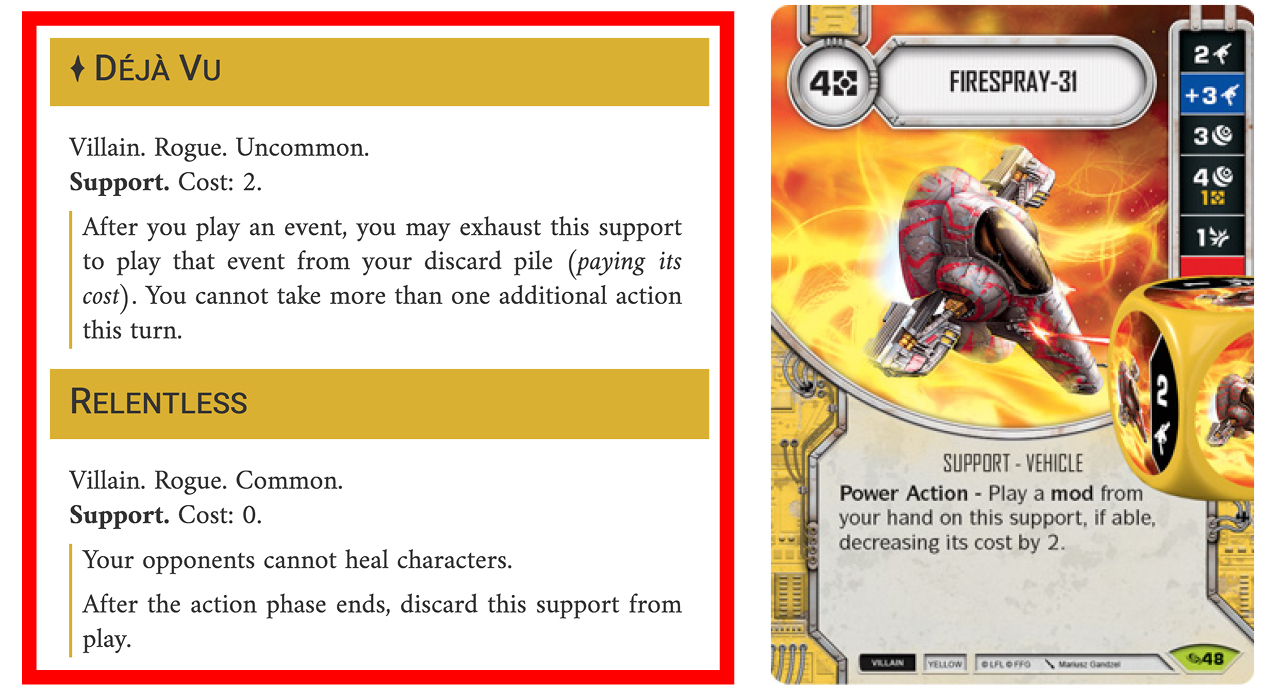 DÉJÀ VU (?/5)
I honestly have no clue about this card. I think it is both trash and potentially busted, but I’m not the guy to brew a deck that will take advantage of it. It seems like anything from resource generators, to removal, to hand disruption all work well with this card.

FIRESPRAY-31 (4/5)
It’s really dangerous giving me a card like this to review, as it's super sweet and I like sweet cards regardless of how expensive they are. Its effect is undoubtedly strong, but the cost of the card itself has a high initial buy in. One Power Action should bring it into line, and after that each power action is making this increasingly broken. If you can figure out a good way to piece this together with mods and reliably play them this should be sweet.

RELENTLESS (0/5)
Healing isn’t a big enough deal for this card to be worthwhile at the moment. Only Ancient Lightsaber really does that, but then you have to catch it in time, otherwise this card is dead against that too. Honestly if it stayed on the battlefield until the end of the game it probably wouldn’t even be that great.
5. YELLOW VILLAIN UPGRADES:

DONDERBUS PLASTER PISTOL (4/5)
Okay so I’ll be honest I actually thought this was just a blunderbuss when I first saw it. I still don’t know what it is after rereading it, but I do know that it’s good. Yellow only shouldn’t be that big of a restriction and I love me some redeploy 2 drop blasters. It even gives a bit of tempo when you play it! 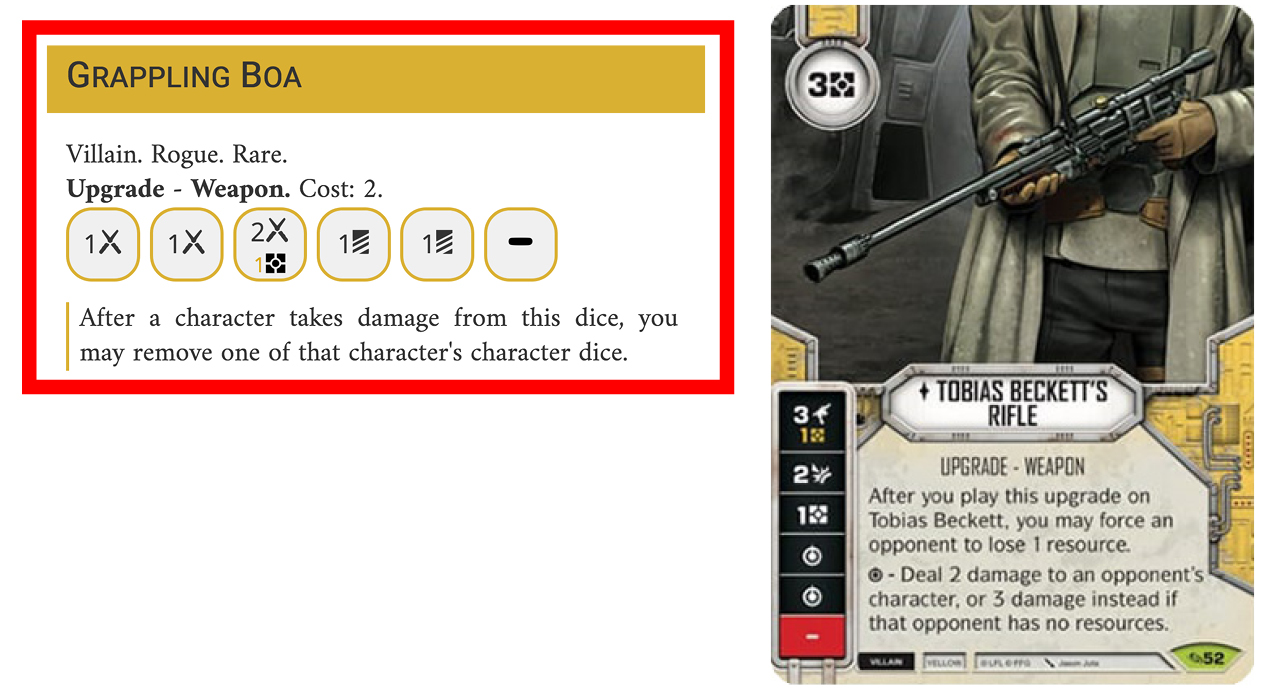 GRAPPLING BOA (3/5)
This is the card Stun Baton wants to be. The damage is underwhelming but the control aspect is actually pretty good, provided you manage your tempo correctly. It’s really dangerous giving me a card like this to review, as its super sweet and I like sweet cards regardless of how expensive they are. Its effect is undoubtedly strong, but the cost of the card itself has a high initial buy in.

TOBIAS BECKETT'S RIFLE (1/5)
I think the sides on this are too underwhelming for it not having redeploy like some of the other 3 drops that you could run instead if you want something fancier than a Holdout Blaster or X-8 Nightsniper. Even the effect when played on Tobias isn’t enough to save this from a low score.

VOW OF VENGEANCE (2/5)
I love the flavor and especially the art, but I think it might be a bit narrow for competitive use. I think in 2 wide lists it won’t really be worthwhile, averaging less than 2 damage I would expect. It might start to turn on in 3 wide lists but then I question if a suitable character will be alive to use it. I imagine the best home will be in a 5 die type archetype, but overall I am low on this card.
BLUE VILLAIN REVIEW
RED VILLAIN REVIEW
BLUE HERO REVIEW
RED HERO REVIEW
YELLOW HERO REVIEWBLUE NEUTRAL REVIEW
RED NEUTRAL REVIEW
YELLOW NEUTRAL REVIEWGREY CARDS REVIEWWritten by
LAKE QUITT