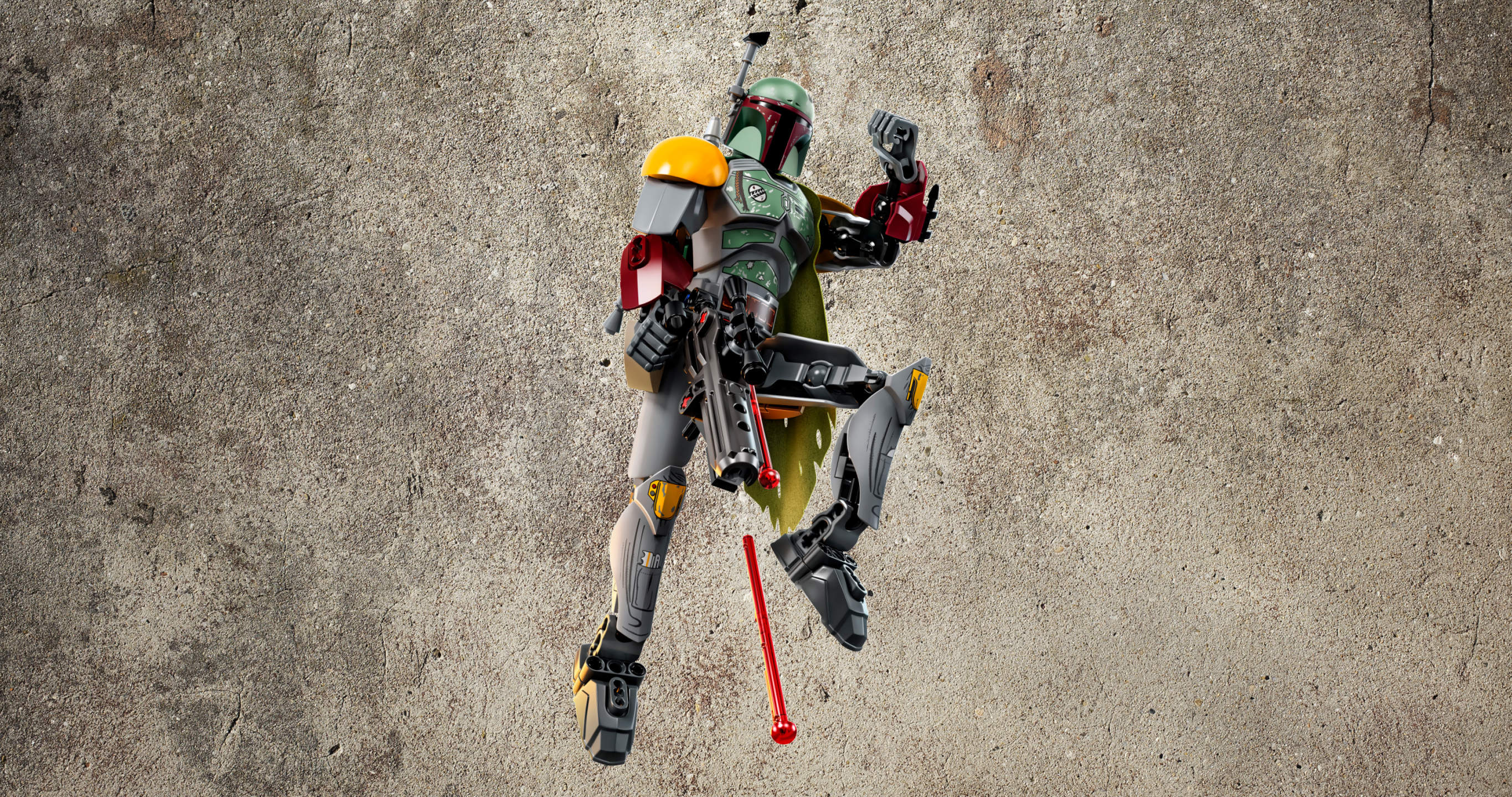 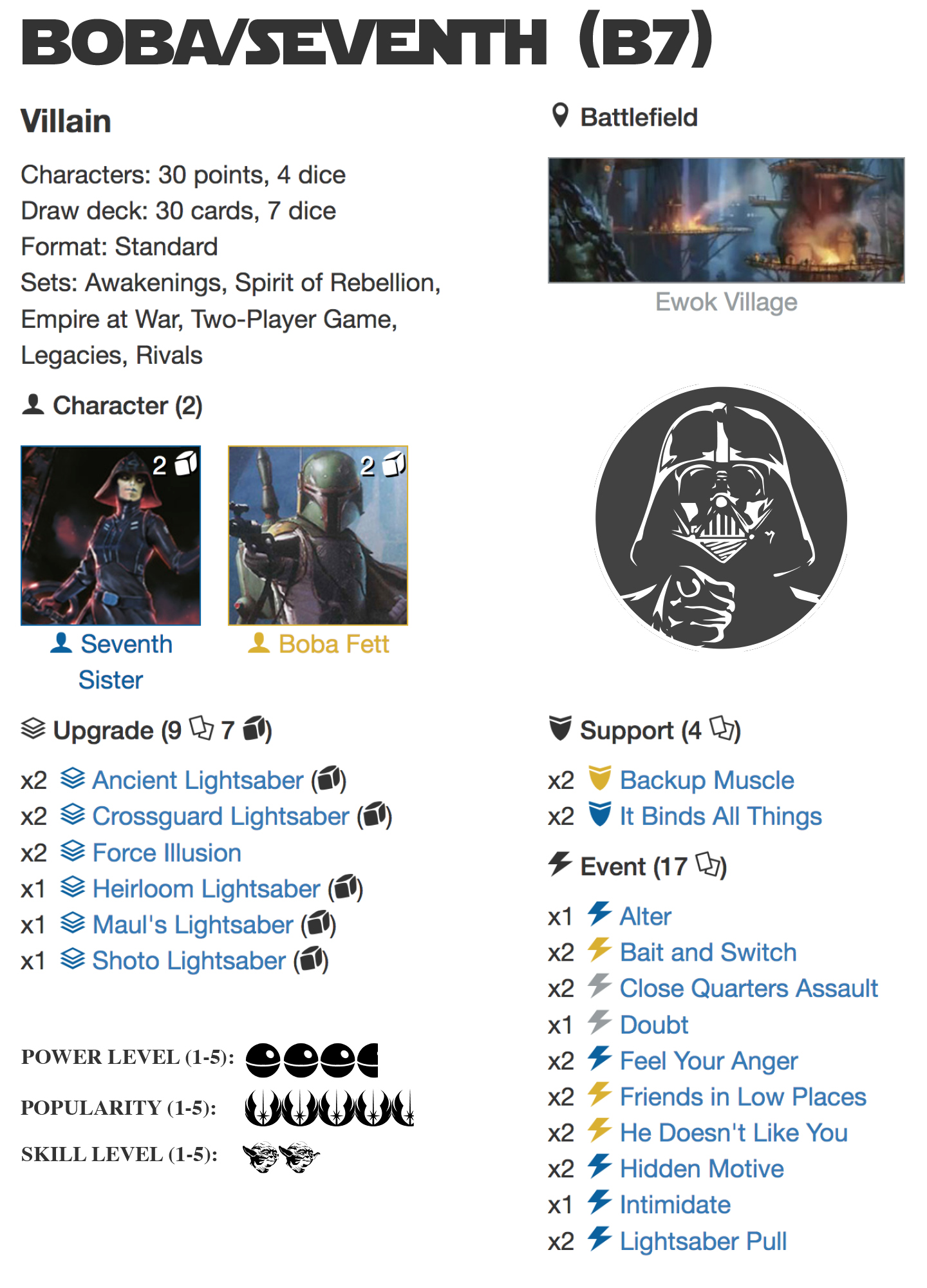 1. CREDITS:This deck was piloted into top8 at WORLDS 2018 by Matei Dragne. There are other tournament winning versions out there, but this one was his! Matei also wrote a nice article about his thoughts on the deck, for TheHyperloops.
2. GENERAL COMMENTS:When the dust finally settled after the horror that was BrOTK had landed (March/April 2018) and ripped heads off, shredded characters and maimed whoever was left standing, Boba/Seventh emerged as one of the deck that could stand its ground against BrOTK. It combines the qualities of midrange deck with burst damage, and has an extremely high damage ceiling capping at an incredible potential 22damage in round 1 (maybe even higher).

It’s stupefying … obviously, you’ll end up with no friends who’d ever want to play with you again if that were to ever happen, but hey … it’s still 21 damage.

The deck has already lit up the Regionals season like wildfire (winning several large events), not only because it can go toe-to-toe with BrOTK, but because of its versatility. It brings 5 dice to the table right off the bat, and while Seventh Sister’s dice are not the greatest in the world (they really aren’t), at least she has the courtesy of bringing 3 to the party, while you also get to play around with the Boba dice, which conversely are good.

We discuss midrange decks in YOUR Destiny Podcast Episode 11 here.
3. THE CHARACTERS: 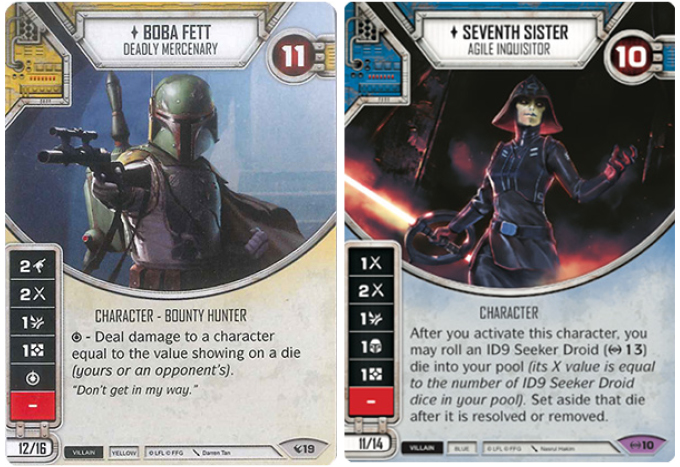 The Bounty Hunter to replace the old fan favourite of Jango, who was one of the pillars of the early Awakenings meta. The original reception of Boba Fett was lukewarm to say the least. Players had expected some world eating, carnivorous mothaf*cka, that’d have 7 damage sides, and dice the size of T-Rex cojones, and while that wasn’t the case, he somehow turned out to be the Bounty Hunter we actually deserved.

Boba’s dice are actually really good. Although mixed, the two base damage sides are decent and for free, while the Special can be outright abusive. Sure, in most games it’ll be another 2 damage, but in some games, and they do become more and more frequent, the special can represent 4 damage (+4 on Maul’s Lightsaber, 4 on Vibrocutlass, 4 on HWK’s) and even go as high as 6 damage (6 Indirect on Resistance Bomber). Now, that’s a potential 12 damage from Boba’s two character dice. Still no love for the Ol’ Bountaaay Huntaaar …? Another note to self is of course that Boba’s special can trigger off ANY die side. So the 3 resources showing on a Chance Cube suddenly became 3 damage!

Even the Disrupt side can be useful in a meta where bigger is better and quite a few decks are hogging resources like never before (Vehicle and Mill decks). A few versions of this character pairing have even resorted to My Kind of Scum for maximum benefit of the disrupt sides (gain resources equal the amount of resources you just disrupted). But let’s admit … you didn’t bring Boba Fett to the prom just to disrupt resources. You wanna DANCE!
(CLICK the image below to see one of our YouTube videos using Boba/Seventh. The deck list differs from the one presented here, but the game play and basic strategy remains the same. The video will open in a new window). 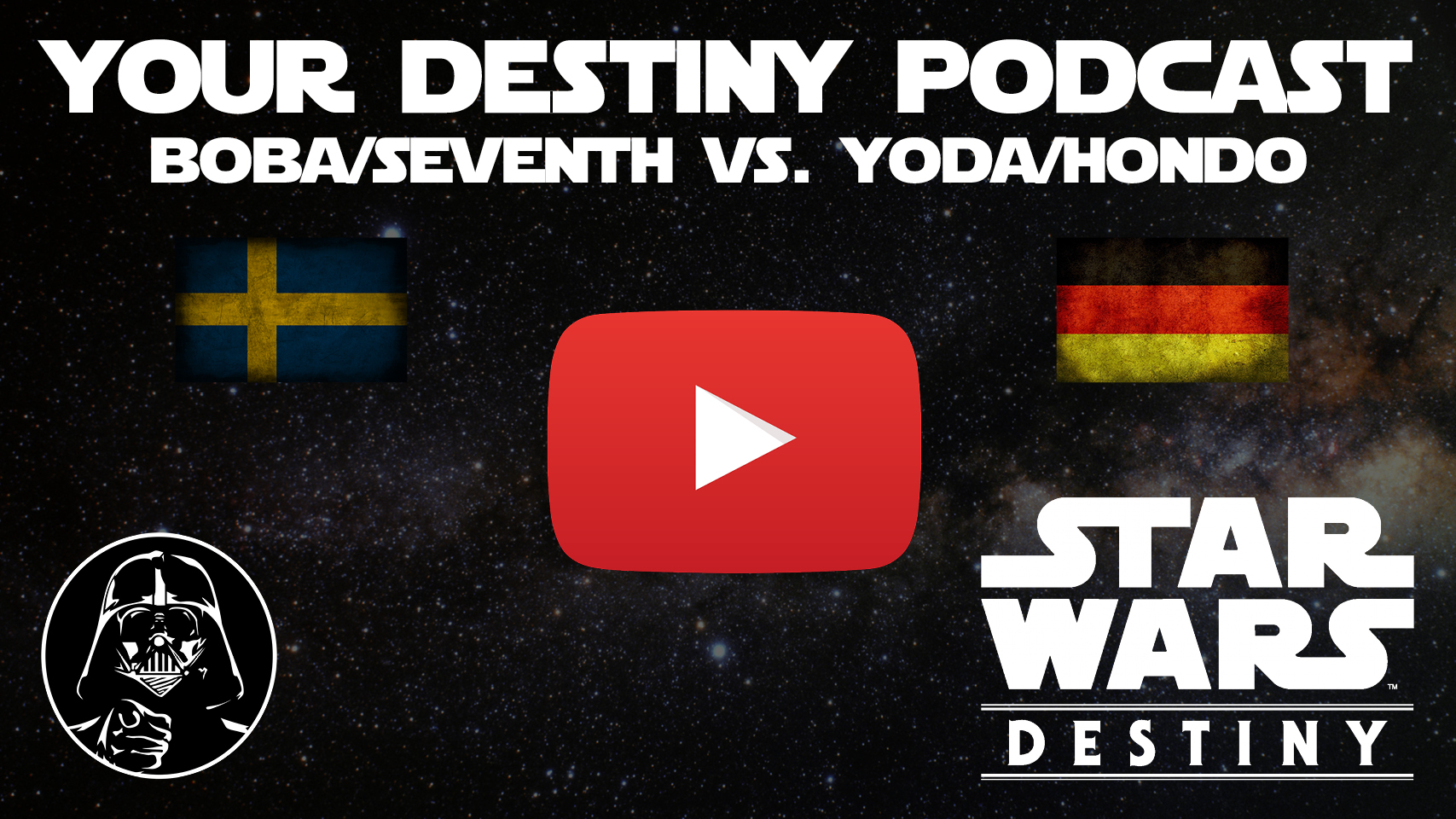 Your number of upgrades (7 weapons + 2 Lightsaber Pull) should ensure that you'll reliably draw into at least 1 upgrade round 1 , and while you are not going to win the upgrade race against pure midrange decks like Rey2/Aayla, you do bring some real hard-hitters. The strategy should be to upgrade Seventh Sister first, then switch to redeploy weapons once Seventh is being targeted down (and in most match-up she will be the first target).

Notable omissions in this version of the deck include Vibroknife and Vibrocutlass that are often featured in Boba/Seventh decks. The reliance on It Binds All Things to make the deck a bit less resource starved really explains the upgrade package, and while aforementioned upgrades are all great, this version feels much more streamlined and offers more options both offensively and defensively.

SHOTO LIGHTSABER
It's just the bomb. The dual trigger effect of either gaining a shield or removing a shield is simply amazing, and it doesn’t really matter that it has 2 modified damage sides since you have plenty of base damage sides on your other dice.

CROSSGUARD LIGHTSABER
A lot of Boba/Seventh decks run Vibroknife in this spot, but I do like the addition of Crossguard Lightsaber instead. It has 1 less melee side to trigger your Close Quarters Assault, but the damage sides remain the same because of the Crossguard special. Crossguard Lightsaber also has the advantage of being a blue upgrade, so it can be used in conjunction with your It Binds All Things and Shoto Lightsaber.

ANCIENT LIGHTSABER
It is one of the most expensive cards ($$$) in the game for a reason. It is GOOD! The ability to heal characters as well as double base damage sides and a +3 that just suits Boba’s special fiiiiiiine, makes it a no-brainer in this deck. In most decks really!

HEIRLOOM LIGHTSABER
Can be redeployed. AAAAND it has 3 base damage sides. It is mainly in the deck to make sure that the resources spent on upgrades are not wasted when the upgraded character is defeated.

FORCE ILLUSION
It's bonkers ... and it's probably one of the things that needs an errata even before rotation hits. It should really read "Blue Character Only". It's essentially another mitigation card. Don't get greedy with your Force Illusion!! Don't sit around and save it for too long. Suddenly, before you realize it you are out of cards in your deck, or your opponent is able to hit you with unblockable damage. 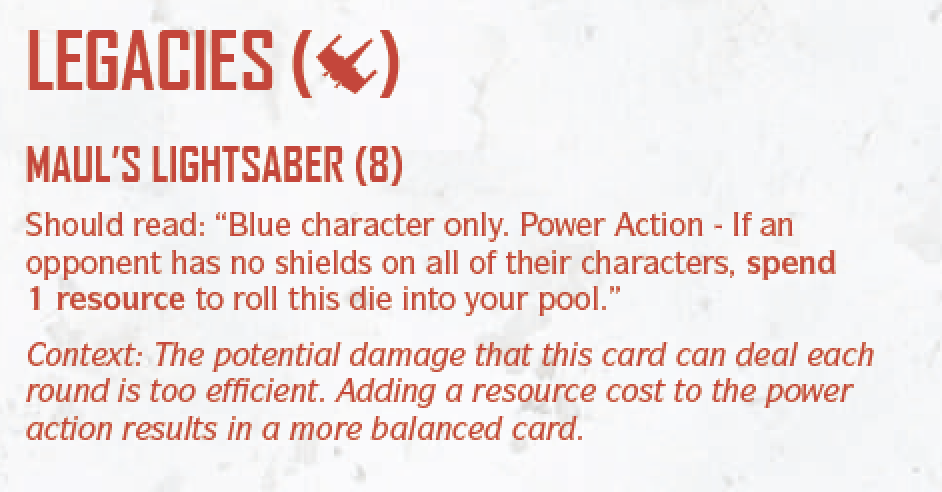 MAUL’S LIGHTSABER
What is there really to be said about Maul’s Lightsaber that has not already been said?! It is probably, no - it is THE BEST WEAPON UPGRADE in the game (even post-errata). Sure it’s Blue Character only, which does put some limitations to it with this particular character pairing, but it outshines everything else and just simply makes things go: BOOOOOM. Not only does it make Boba’s Specials insanely powerful, it also slots beautifully into the deck. Maul’s Lightsaber becomes just tyrannical with Bait and Switch. Good Lord - do not find yourself on the receiving end of this behemoth! If you get this into play round 1 your opponent is fighting an uphill battle.

BACKUP MUSCLE
I've seen a few Boba/Seventh decks toy with the idea of not including 2 Backup Muscle or even cutting them altogether ... DO NOT DO THAT! Backup Muscle is brilliant. The number of times that card has killed off a character are countless. 3 guaranteed unblockable damage (albeit over the course of 3 rounds) is just too good not to include!

5. EVENTS:The events package is somewhat diversified and a lot of it is dictated by circumstance rather than choice. The eBoba/eSeventh deck feels like an opportune deck that arose out of necessity … I blame BrOTK!

The event suite (17 cards in total, including the 2 Lightsaber Pulls that were counted as upgrades) does have a very good resource cost curve.

Because you are running 14: 0cost events, you can free your deck of cards like Well-Connected and Truce, and make space for powerful one-offs like Intimidate, that can potentially be 3 damage out of hand (and needed because of the lack of Vibroknife), and Alter, which can be massive if you are able to play around mitigation.

MITIGATION (7)
Doubt, Feel Your Anger, He Doesn't Like You and Hidden Motive are all your pretty average mitigation cards (in some matchups even pretty weak), with Feel Your Anger being the only potential blow-out mitigation card (high ceiling, but low floor), and you'd not be the first player sitting with a Feel Your Anger in your hand that you simply can't play because of those damn Yoda dice. Don't get too greedy with the Feel Your Anger. Removing 1 die is perfectly acceptable, while 2 is great and anything beyond that is just you being lucky.

CLOSE QUARTERS ASSAULT
Boba/Seventh might not be the best Close Quarters Assault deck in the pack, but it comes pretty darn close (Kylo2/Annie is probably THE best CQA deck), and with 5 melee sides on Seventh Sister (2 character dice + 1 Seeker Droid) and possibly a saber upgrade, it's fairly easy to trigger a decent CQA, that will bleed your opponents hand of vital cards. This card is key in your Vehicles match-ups.

BAIT AND SWITCH
If just heroes had Bait and Switch! It's an amazing card. That's actually an understatement. It is probably one of the best cards in the deck - if not the game. To be able to turn Boba's die into a 4 damage sides character die is just craaaazy. Your opponent will be expecting the Baits, and rest assured that he will be checking your discard pile for it.

ALTER
I really like the inclusion of that single Alter. Make sure you play around mitigation, but with the diversity of damage sides on your dice, as well as the Boba specials, you are sure to make Easy Pickings or Into the Garbage Chute as difficult as possible. The fact that Alter (as opposed to Concentrate) can be used defensively is just a bonus.

FRIENDS IN LOW PLACES
This card is a winner in any deck. Being able to pick off your opponent's mitigation can be crucial to set up the kills you need.
7. REMEMBER:Do not remove the Seeker Droid die from your pool when Seventh Sister dies. It stays in the pool until resolved!

8. SLEEPER CARDS:
There are a number of cards that could be flexspots, and alternatives for these spots could be:
Abandon All Hope, Lightsaber Throw and It will All Be Mine. All of these cards have great utility, can be potential game changers, but does not necessarily add strengths to the core of the deck. It will mess with the resource curve of your events, and it's really good where it's at!