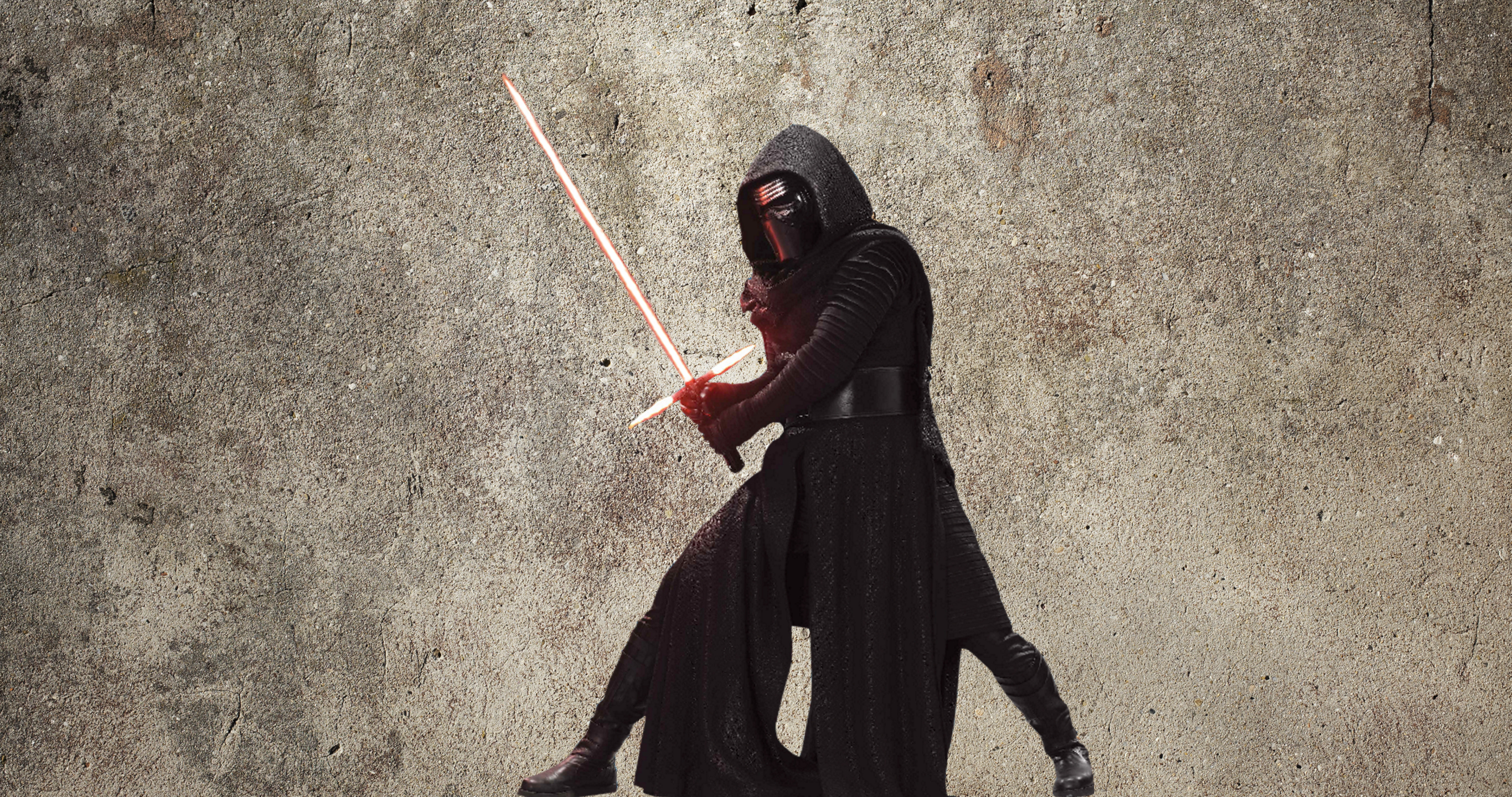 1. CREDITS:We are analyzing World Champion Edwin Chen's version of Kylo2/Anakin, and while there are several good versions out there, this one will obviously be amongst the most popular, and has proved it's mettle on the biggest competitive stage.

Edwin Chen wrote an article on the development of his deck, as well as a tournament report from WORLDS 2018, for theHyperloops, which you can read here.

2. GENERAL COMMENTS:As the smoke was settling from the Regionals Season, several strong contenders emerged as the leaders of the pack of the current meta. Early on ePoe/eHondo made strong showings (listen to our YOUR Destiny Podcast Episode 9 here for some of our musings on that particular character team), then the menace which was BrOTK, ingeniously modified by HonestlySarcastc from Rebeltrooper’s original 7OTK version, followed by a dominance of Boba/Seventh and Rey2/Aayla (those two decktypes most likely prevailed because they were so good at combating BrOTK, using Close Quarters Assault while dishing out reasonable amounts of damage themselves), not to mention Rainbow Hero Vehicles and Mill, which both have made strong impressions.

Kylo2 is good. We know that! Everybody knows that! Finding the perfect partner has seemed somewhat less of an easy task. As we discussed in the YOUR Destiny Podcast Episode 7 (here), Kylo2 slots sooooo perfectly in with Anakin Skywalker - Conflicted Apprentice. Not only does the pairing make for 2 tormented and conflicted psychedelic boys, but they also have damage coming out of their wazoos: Counting the special sides as damage on Annie, they are 50% damage. 50% —It’s outrageously good! On top of that they boast a very decent health pool coming in at 22hp (12/10), that’s better than both Rey2/Aayla (11/10) and Boba/Seventh (11/10).

Then, why didn’t they make much of an early impact? While Kylo2/Talzin have been present throughout, we’ve seen preciously little of the New Emos, and the pairing only made the top spot in 1 Regionals event, worldwide.

First of all, it might simply be down to lack of availability. Although we’ve known about the pairing for a long time, with Annie only being available in Rivals, and Rivals arriving late, it took a while for us to have the proper data-foundation for exhaustive, or at least decent analysis.

Secondly, players - at least judging from online conversations - have been conflicted (see what I did there!?) about whether to run the pairing with Lightsabers (as in this version), Holocrons or a combination of both.The versatility of blue villains has in this instance been both a boon and a bane.

Thirdly, The New Emo Boys are resource starved. With no way of reliable generating resources (save the It Binds All Things and the Battlefield: Rebel War Room), the 4 pay sides in the deck can be a real killer, which in turn should be an argument for including Holocrons and Chance Cubes, but as you also lack the ability to fix your dice (focuses or specials) both cards are unreliable, while melee weapons seems to fit the bill nicer (easier).

... and then WORLDS 2018 happened! With Edwin Chen becoming our new supreme World Champion of Destiny, bringing this exact character pairing to the top at the biggest competitive stage in the world, might just have been what was needed to tip the scale. Only time will tell if we are going to see everyone go Kyloanniemaniac.

This version of the deck is an aggro deck - pure and simple. It should play out fairly easy, although resource management is an issue (which explains the choice of Battlefield).
3. CHARACTERS: 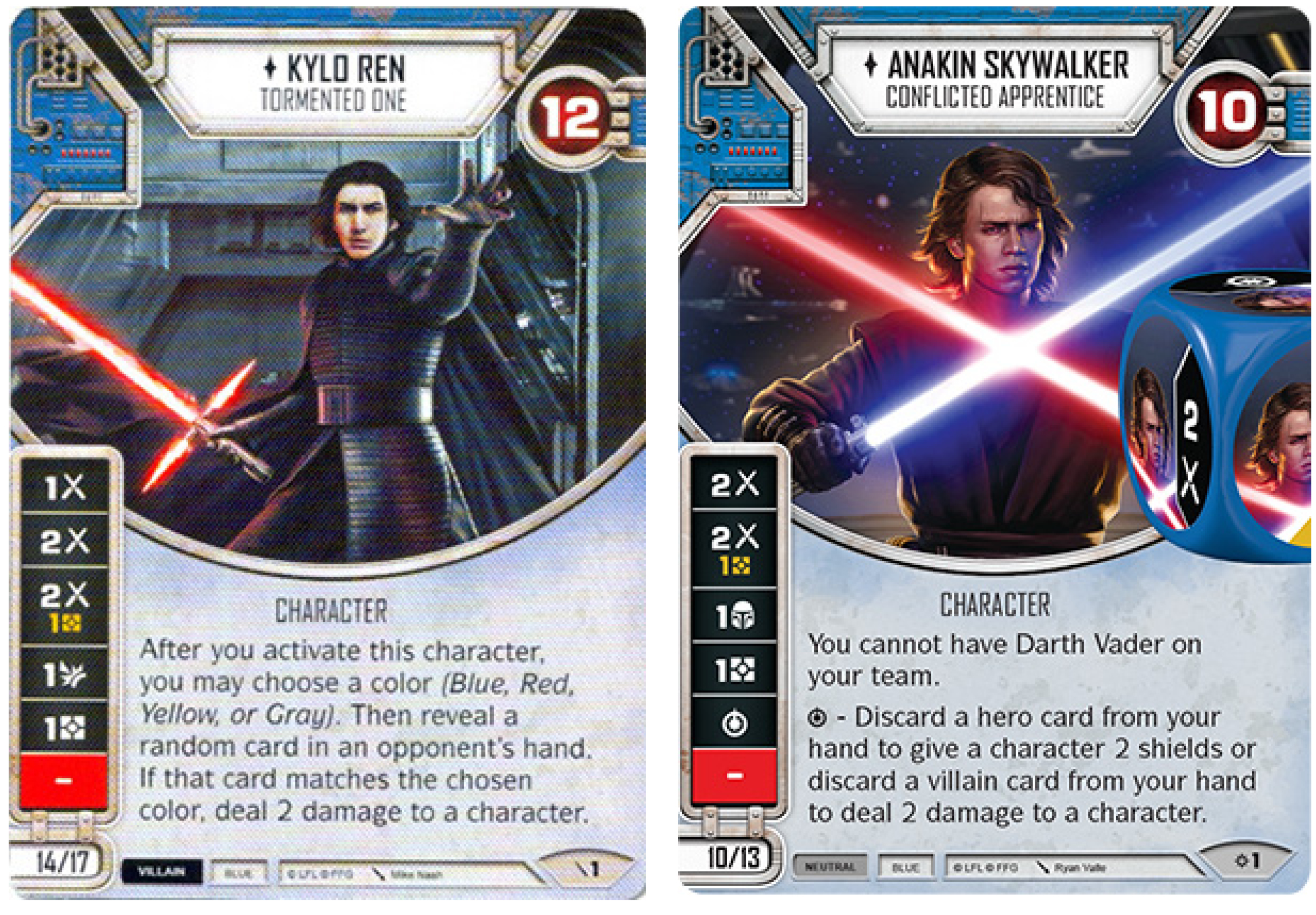 Guessing correctly with Kylo's ability is OBVIOUSLY going to be a winner for you. Dealing 2 damage on activation is bonkers. But guessing is not always guessing - is it?!

Playing Kylo Ren, you need to know your opponent’s deck. You need to know what cards are the preferred cards in her hand, and also need to keep track of the discard pile. A shrewd opponent is going to minimise the effect of the Kylo activation, both in deck constructing (to keep ratios of colours 50/50, 33/33/33), but also in making sure that every time Kylo activates there’ll be several options and as many cards as possible (or liquidating their hand). Your task on the other hand is to make sure that the guess is as qualified as possible. You are going to have a field day against monocoloured decks, which Edwin Chen proved the hard way at Worlds, pummeling both Mike Gemme (monoyellow) and Mads Utzon (monoblue) on his way to glory, but that’s hardly a surprise, and since your opponent knows, they’ll work their way around it, either making guessing as hard as possible (keeping grey cards in their hand), tanking the damage (shields) or simply pushing hard for an early Kylo kill.

Sometimes sitting back with Kylo can be the smartest play. Let your opponent play his cards, reducing his hand size, while making it easier for you to map out the remaining cards in his hand. Unless of course the 2 damage from Kylo would be lethal, then just go to town!

In most instances your opponent is going to target Kylo BIG TIME, but Anakin is a softer target. If you can make your opponent go after Annie, you are really already halfway there. Upgrading Anakin might make your opponent want to change focus, in particular if you started the game with the shields after the roll-off. Putting both shields on Kylo could in itself work as a deterrent for going after him. 14hp (12 + 2 shields) is not that easy to take down after all. You probably do want your own Battlefield though - and the Intimidates will help you level the playing field easily.

Another thing to keep in mind is that this deck is not optimised towards triggering Anakin's special. Your deck contains only 12 villain cards, of which a fair bit of them are almost indispensable for your deck. Do not expect every Anakin Special to trigger damage!
4. UPGRADES & SUPPORTS:The upgrade package is debatable, but once you choose the path of the Lightsabers (over the Holocrons), there are still a few hard choices to be made.

SHOTO LIGHTSABER
Is one of the best upgrades in your deck. The ability of either removing shields or gaining shields is nuts, and because of your reliance on It Binds All Things you run an exclusive blue upgrade suite. The 2 modified damage sides shouldn't be too much of a worry, as you are flush with base damage sides in the deck.

CROSSGUARD LIGHTSABER
It is almost as no-brainer on Kylo as Rey's Lightsaber is with Rey. It lacks the third melee side (compared with Ancient and Shoto Lightsaber) to trigger those Close Quarters Assault, but the special and the "play" trigger sort of offsets that.

MAUL'S LIGHTSABER
One of the greatest upgrades in the game, even post-errata, was always going to be difficult to play in a deck with 4 paysides on 4 character dice. The inclusion of Enrage and Rebel War Room sort of helps out, but it is more likely that you'll be playing Maul's round 2/3 as an overwrite. But Maul's is just such an indomitable weapon ...

ANCIENT LIGHTSABER
There's a reason why it's the games most expensive card ($$$). It's good! Plain and simple. The ability to heal can come in handy in a deck that's all about offense, with very little shield generation bar the few sides on your upgrades and the Force Illusions.

HEIRLOOM LIGHTSABER
Your only redeployable weapon. It's a one-off (same with Maul's Lightsaber) and its cost is simply prohibitive to its usefulness in this deck.

FORCE ILLUSION
Can be viewed as your 9th and 10th mitigation card and is actually your only true defensive measure. Don't wait around playing the Force Illusion. You'll not be the first player to curse their action sequencing when a No Mercy or a Force Speed special into re-roll into lethal ends the reign of Kylo. Just play the damn Illusion!
5. EVENTS: 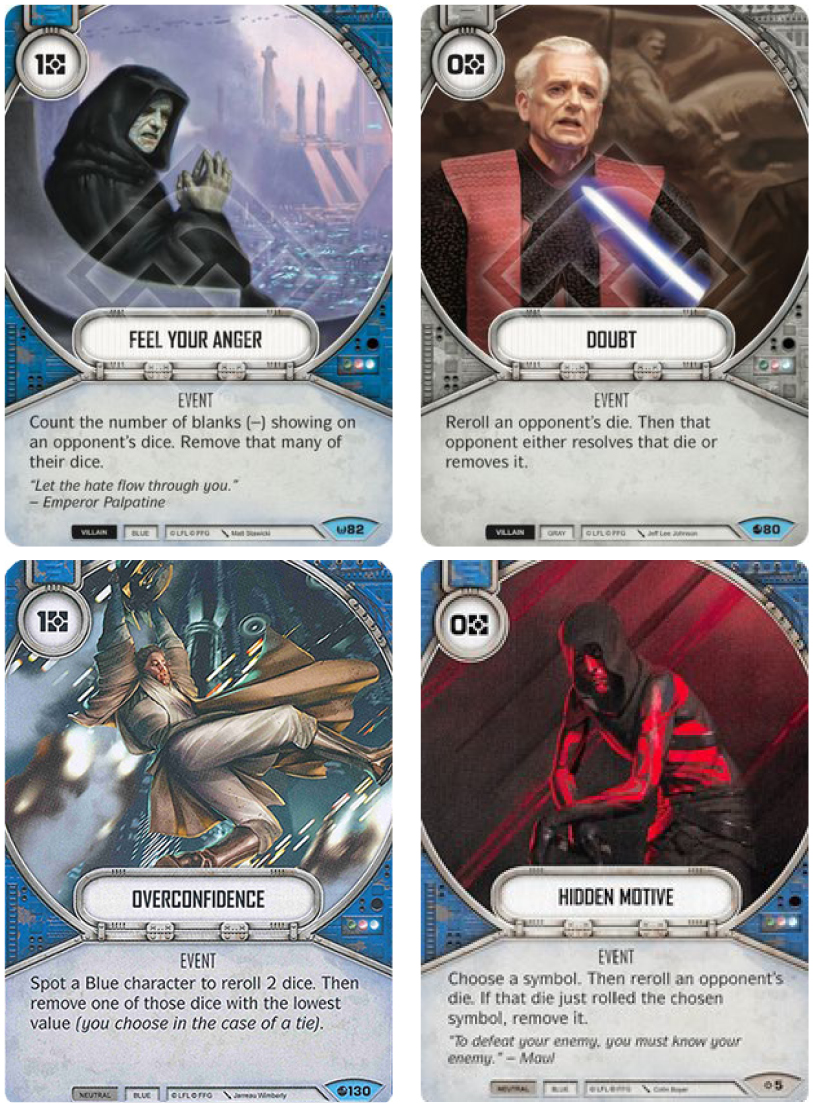 MITIGATION CARDS (7/8)
Your 8 mitigation cards have a decent resource curve (4: 0cost, 3: 1cost and 1: 3cost), with most of them being hard mitigation (i.e. they remove dice). Doubts are great and will help in the mirror match to keep your hand somewhat varied. Hidden Motive really is tricky, and you'll need to be picky on what you attempt to remove. Tank as much damage as possible, and Hidden Motive the worst of the worst. There could be valid arguments for including a second copy of Feel Your Anger (as discussed in the section below on Sleeper Cards). 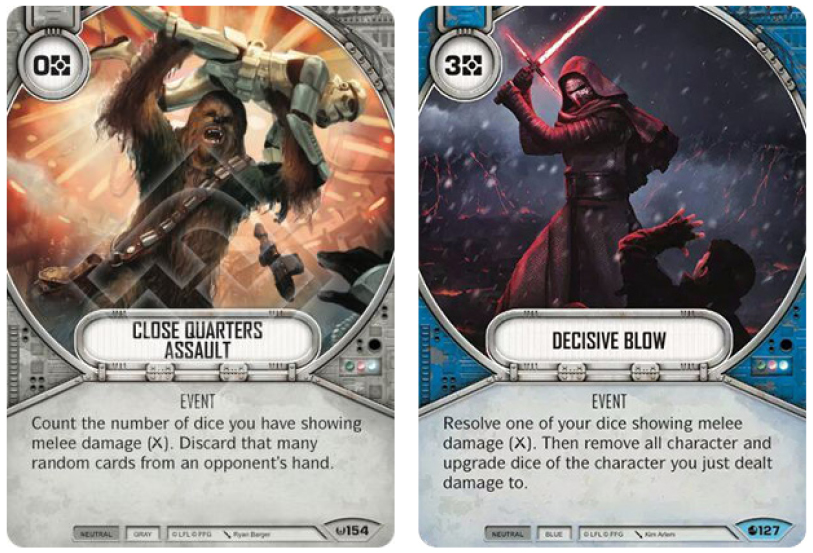 CLOSE QUARTERS ASSAULT
Kylo2/Anakin is probably THE BEST Close Quarters Assault deck in the game. Because of the many inherit melee damage sides (10 on 4 character dice), you'll most likely be able to trigger a CQA for 3+ (with an upgrade) early round 1 or 2. That play can simply be devastating against vehicles, BrOTK, well ... honestly against most decks.

For some reason, Close Quarters Assault fell out of favor with a lot of players, even if it is broken, and maybe it was the return of trick-decks like BrOTK that made everyone see the light again. Today CQA seems as invaluable to melee decks as Colombian coffee is to my morning routine - and rightly so!

DECISIVE BLOW
It's expensive, but can be absolutely MASSIVE! If you manage your resources well  - an early It Binds All Things really helps out - this could be the card that'll save the day (and Kylo) in round 3. Against midrange decks this is going to be a lifesaver. Remember that damage dealt does NOT mean that an opponent's character actually has to take damage.

ENRAGE
With this many paysides on your characters and the errata to Maul's Lightsaber, resources can be extremely scarce in this deck. Enrage will definitely help you out. And although it doesn't have ambush (like Truce), it will still go a long way (well some way) to resource manage.

INTIMIDATE
Effectively means you can decide whether or not to start with the Battlefield without having to worry too much about your opponent getting ahead on collective health pool due to the shields gained. It is also a great utility card against decks playing Caution or Yoda. Against mill decks Intimidate is basically 3 damage out of hand, while it also does good work against Rey2.

NO MERCY
Expensive, but in most games it will be an absolute game winner. Play your No Mercy's aggressively. No Mercy for 4 or 5 can be devastating, even if you don't get to kill a character outright. Your colour distribution in your deck supports the No Mercy strategy, with just 4/30 cards being grey. If you want some inspiration as to how to utilize the No Mercy strategy to perfection go watch some of our games with Miguel Villaroya (2017 Spanish Champion). You can watch one of the games here.
6. SLEEPER CARDS:

HOLOCRON PACKAGE
Main argument for playing the Holocrons is to save resources for resolving your pay melee sides, while the main argument against is the unreliability of the Holocrons. You only have 2 focuses in the package: the Holocrons themselves. The package is much more viable in a Kylo2/Talzin deck, where your Holocrons and No Mercys then would be your 4 even numbered cards, making up “just” 13% of the deck. This deck plays out very differently and aims to be the best Close Quarters Assault deck of them all (and it is!).

LIGHTSABER THROW
Mads Utzon would kill me for not mentioning the Lightsaber Throw. It's damage out of hand, and it essentially means that all your resource sides now become 2 damage sides (as long as you have a Lightsaber Throw in hand), and as amazing as that sounds, I just can't find the resources to play it. Now, this is very much down to qualitative testing (the emotional side) rather than quantitative testing (the mathematical side).

FINALLY a big SHOUT OUT to Loke Andersen who helped review the article and stuck with the New Emo boys when everybody was deserting them!