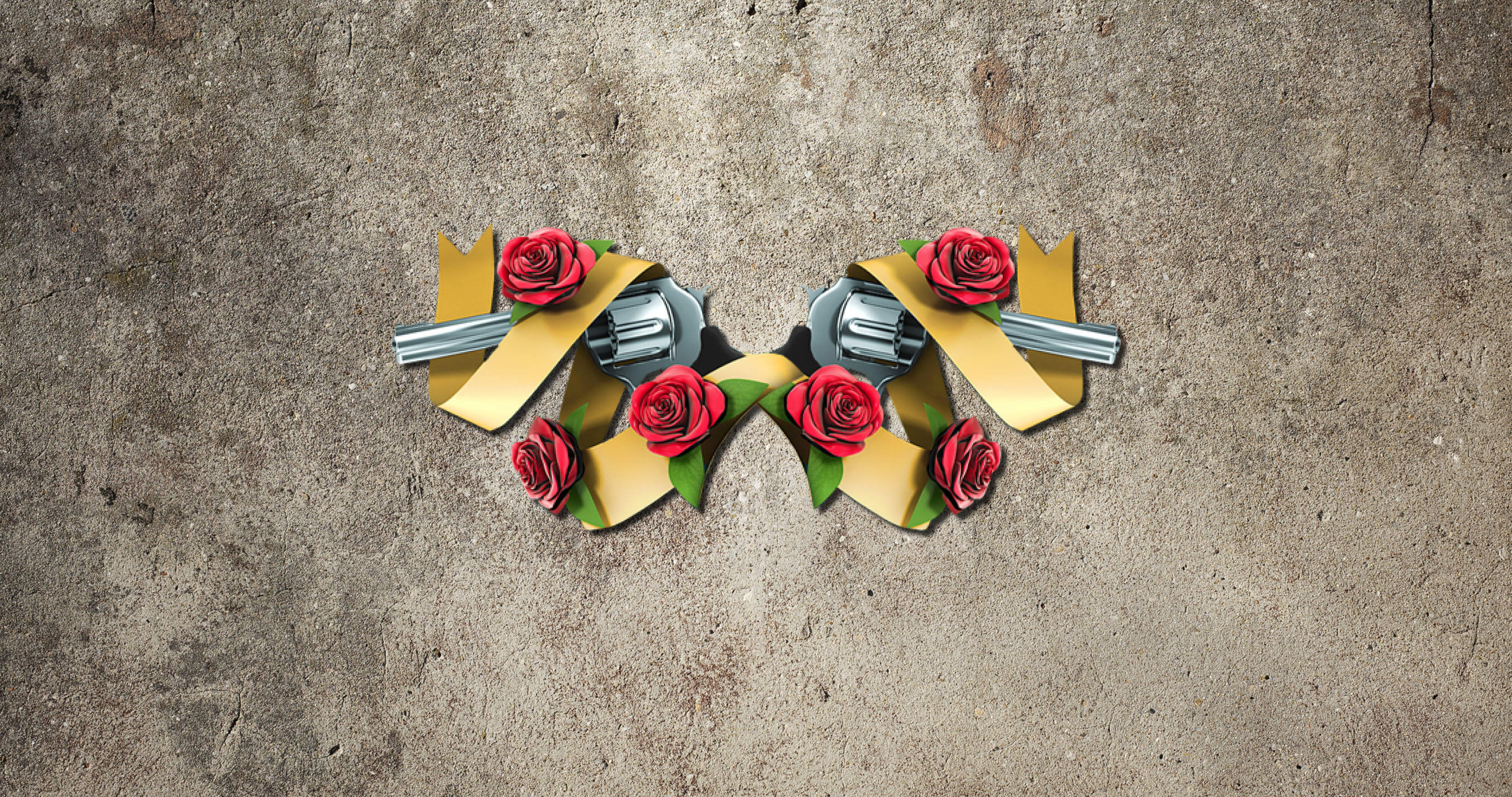 1. CREDITS:This version was piloted by krez to a Store Championship win (and will be the deck we will primarily be analyzing). 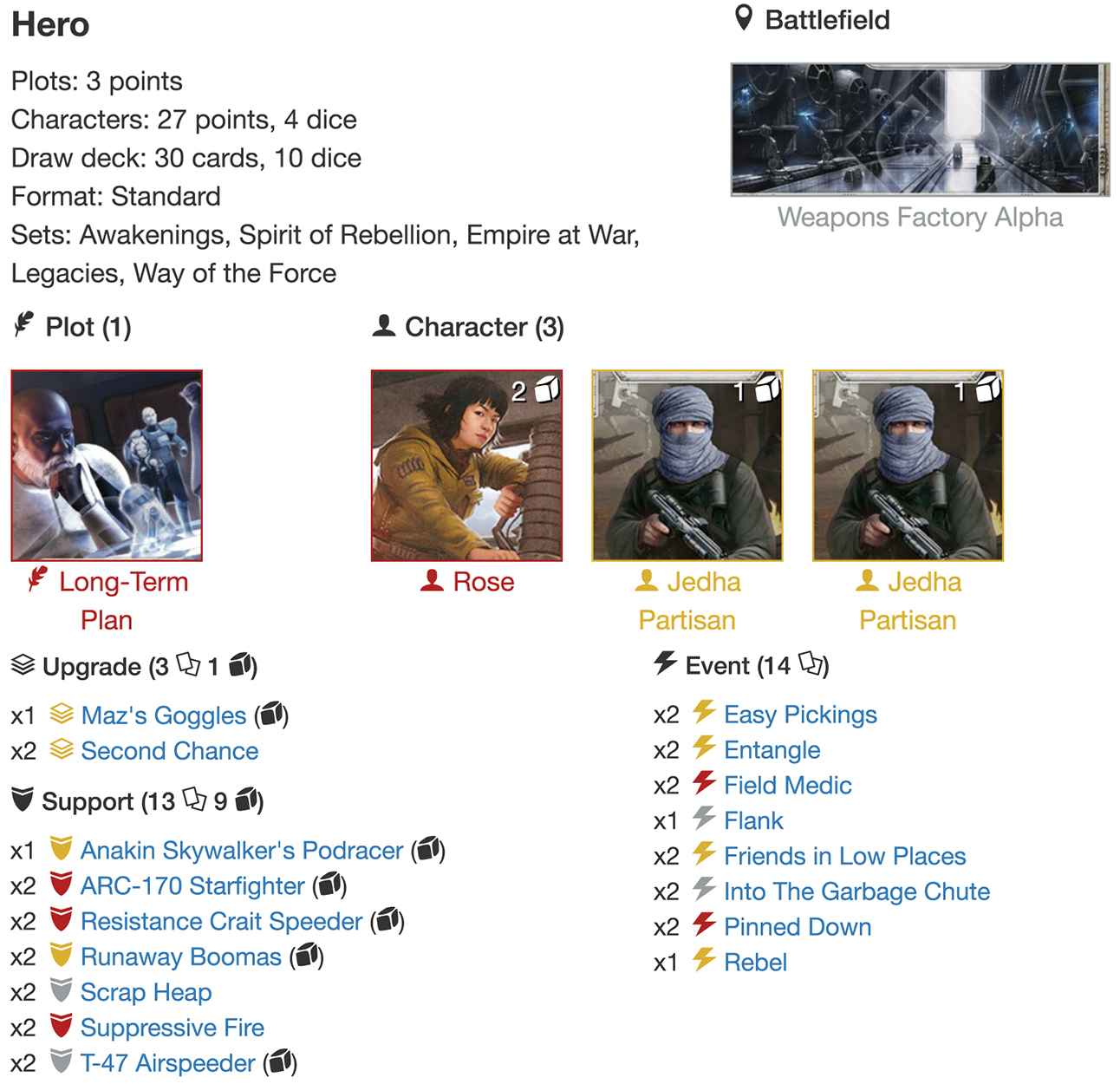 This version of the same character team was piloted by granpachook, also to a Store Championship win, and is much closer to what I'd call a "stock list", and most likely what you'd be bringing if you were to pick up the list today and play in a competitive environment. 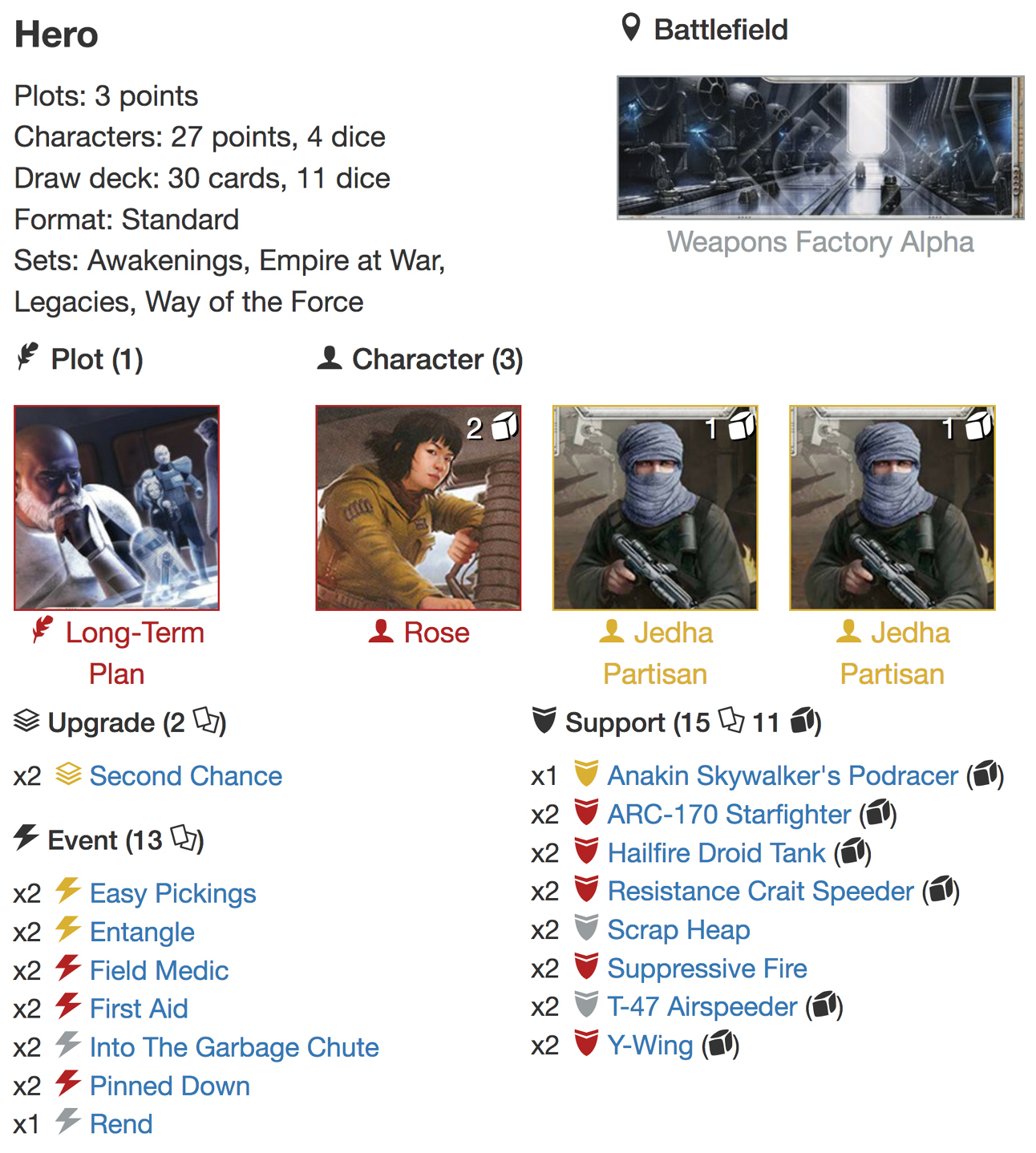 2. GENERAL COMMENTS:The eRose/Jedha/Jedha deck might be one of the most versatile vehicle decks in the format. A lot of the feedback from various Store Championships (July-Aug 2018) reports of quite a few games that has been decided in favor of the Rose/Jedha deck courtesy of mill ... Sure, they might have been able to snatch the win through sheer overwhelming air support power, but being able to play on several strings if needed is just another boost for this deck that really looks menacing!

Both the above mentioned decks are pretty good decks! For this analysis, I chose to focus specifically on the first deck by krez, mostly because it differs the most from other versions (although not a whole lot), and really showcases the different facets of the capabilities of this deck.
3. CHARACTERS:

With a combined health of 25, Rose and the two Jedha Partisans is not the tankiest deck out there, although it's not a mean feat to chew through the 3 characters. They also do not have access to powerful blue cards like Force Illusion, Pacify and Caution, but do boast some of the strongest mitigation in the game as well as healing due to the red card pool.

That's not where the characters shine though. It's instead due to their versatility and consistency!

Rose (alongside Yoda) is the pillar of many hero vehicle decks because she makes vehicle decks ramp, due to the ability to generate resources, and she works miracles in conjunction with a number of cards that are essential to support based decks. Being able to boost the resolution of the Resistance Crait Speeder die every round is just outright B O N K E R S! In particular the interaction with the Resistance Crait Speeder is ridiculous as it is already boasting one of the best dice for the points.

The two Jedha Partisans protects your investment in spot yellow cards and can become excellent finishers midgame. Do NOT underestimate the two 2 Indirect damage sides, which in conjunction with 3 or 4 supports dealing Indirect or Ranged damage can overpower even the toughest characters.

The special ability of the Jedhas, although not the main win condition of the deck, can easily become the downfall of your opponent (as outlined in the introduction). Continuously discarding the top 2 cards of your opponent's deck (remember: It's one card per Jedha Partisan) can very fast become an avalanche of cards, and your opponent might want to reconsider pitching too many cards to re-roll or see his own Force Illusions become the final nail is his coffin.
4. LONG-TERM PLAN:What you sacrifice on not "upgrading" your characters you are getting back from your LONG-TERM PLAN, which really does live up to it's name. 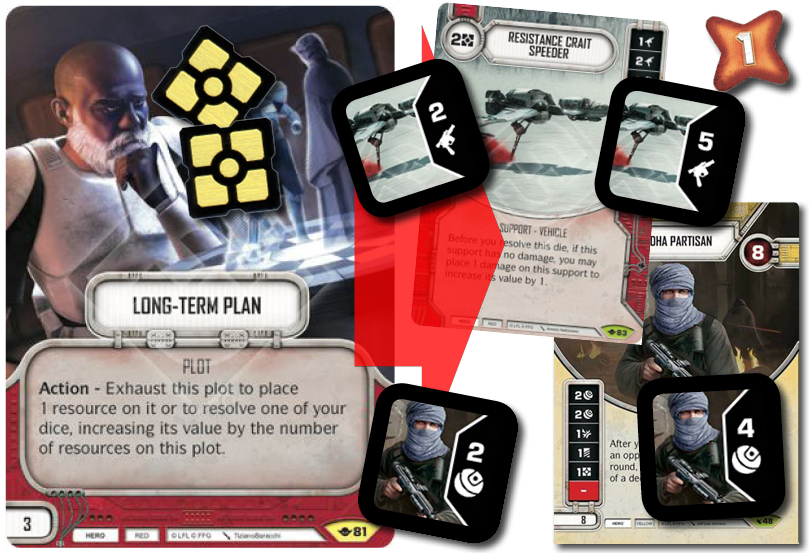 The Plot's interaction with the Resistance Crait Speeder is insane and the ability to deal 5 Ranged damage in round 3 from a 2 cost support is quite honestly ridiculous! There's so much inherent abuse possible here. A 4 Indirect damage from a Jedha Partisan also looks quite menacing and late game so does a 3 Discard side, which combined with the steady discarding of cards from your opponent's deck easily can be what you need to sway a game on the verge of defeat to a resounding win!

Most players have commented that they stop at 2 resources on the Long-Term Plan, and it also looks as if that's where you get optimal value out of it if the game goes on for 4-5 rounds.
5. SUPPORTS & UPGRADES:

The 2 RESISTANCE CRAIT SPEEDER and T-47 AIR SPEEDER are mandatory! There's so much value for money in the pair, and Rose's ability to remove the damage token from the Crait Speeder is just silly efficient. Even if you only get to use the ability twice, most likely because Rose has been focused down, that's still plenty of value! ANAKIN SKYWALKER'S PODRACER is an interesting include here (and appears in both featured lists), and most likely, because it helps defensively (with its two shield sides) and helps facilitate the secondary mill win condition.

The exclusion of the Modified HWK-290 in both lists is also quite interesting, when it has been a staple in vehicle decks since it first appeared in Legacies. The logic behind it is that EITHER Rose deals with the Resistance Crait Speeder and maximizes the value from it, OR she deals with the damage on the HWK-290. It's too risky having a Modified HWK around with damage on it, constantly dealing Indirect Damage to your character team, especially since your character team is fairly low health. 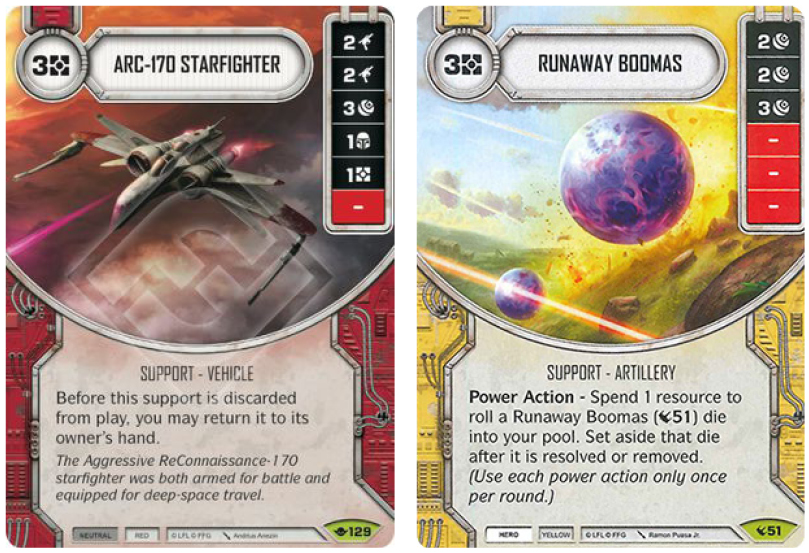 The ARC-170 STARFIGHTER is a great vehicle for this deck, and while the Fang Fighter has a similar die it loses out to the ARC-170 because of the effect of Long-Term Plan. Three damage sides is just amazing and in round 3, your opponent is potentially looking at 4 Ranged, 4 Ranged or 5 Indirect damage (augmented by your plot)!!

RUNAWAY BOOMAS is a very surprise inclusion in a deck that doesn't really have any Focus sides, but that's where the Maz's Goggles come into the picture AND, more importantly, because of the Power Action and all the other dice at your disposal, you'll be able to flood the board with Indirect damage, which again because of Long-Term Plan easily can become lethal damage.

This is normally where we'd talk about how powerful Rally Aid is, secondarily Tech Team, and how important they are to your ramp ability! Neither of the decks have any of those supports, and it's to some extent due to the double stranded nature of the deck (Indirect damage and mill), but in particular in the primary featured deck, the density of vehicles is quite low, and there's a real risk of you not having more than 1 vehicle in hand (apart from round 1, where you'll most likely be able to mulligan into 2). 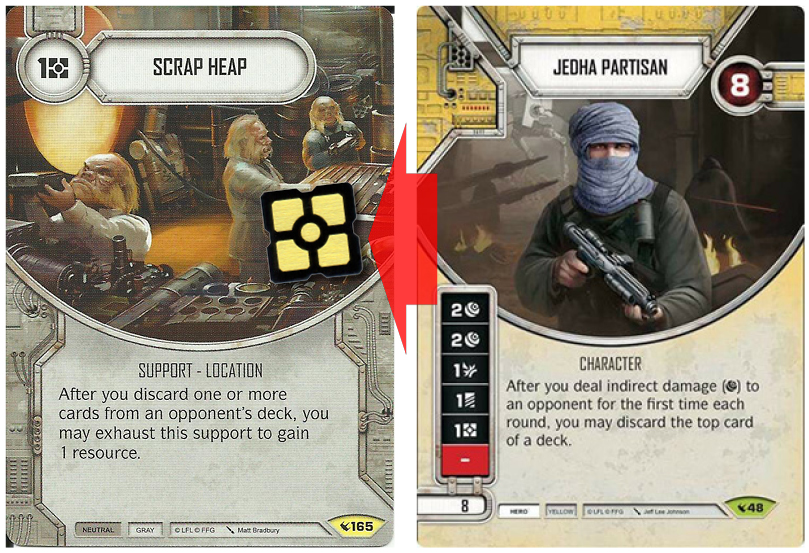 In these instances SCRAP HEAP is actually a much better ramp card, and two Scrap Heaps could/should net you 2 resources per round due to the Jedha Partisans, who will never be your opponent's primary targets (which then also explains Anakin Skywalker's Podracer in the deck). 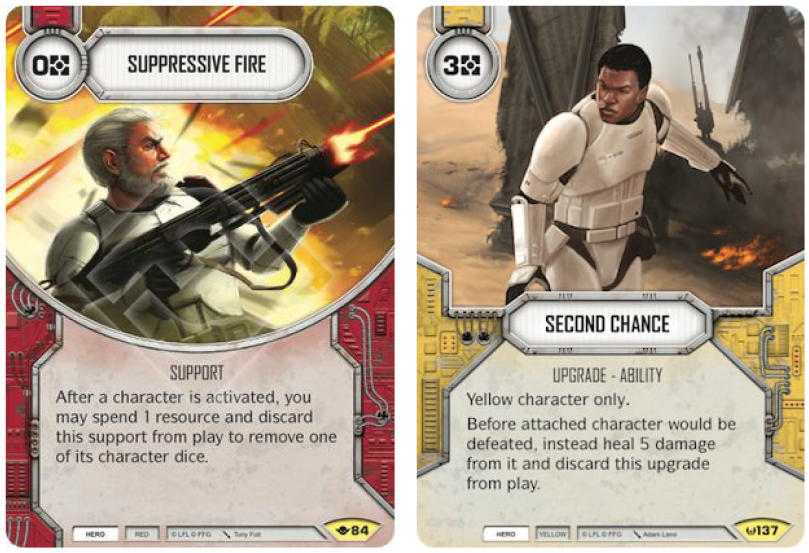 Both the SUPPRESSIVE FIRE and the SECOND CHANCE is really mitigation, and Suppressive Fire is son incredible powerful against action cheating, i.e. Solo Sabine or a Force Speed augmented Kylo2, while the Second Chance is really what strengthens your mill win condition. Finishing off two Jedhas after having gone through mitigation and a 9 health Rose can be a quite difficult task for any deck.

The MAZ'S GOGGLES is there for the Focus sides, and in certain match ups, that are already somewhat unfavorable to the deck, to pick out Hyperspace Jumps, In the Crosshairs, etc. that can completely wreck your rounds.
6. EVENTS:

EASY PICKINGS and INTO THE GARBAGE CHUTE is just some of the best removal cards available to you, and can normally take the worst bite out of aggro decks, at least for long enough for Rose to generate resources to get multiple vehicles down and put pressure on your opponent.

ENTANGLE is an amazing card against characters like Kylo or Luke, who rely on few, but extremely powerful dice to close down games. Removing both Kylo dice, i.e. in Kylo/Snoke or Kylo/Pryce, can go a long way to decide games in your favor. Very often it can be a good idea to remove dice proactively, i.e. before a re-roll! 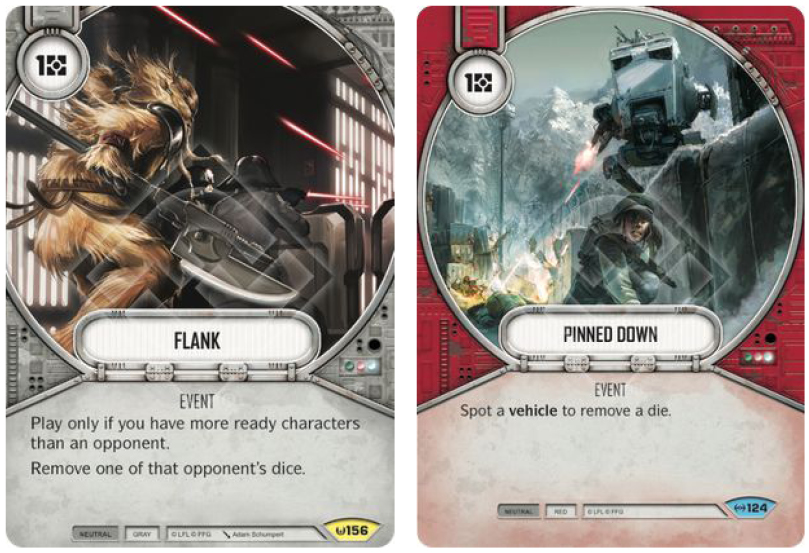 FLANK and PINNED DOWN are your "safe removal" cards as the condition for playing them is easy for you to fulfill. These cards are for that die that just has to be removed! Point, shoot, remove!

FRIENDS IN LOW PLACES are for those rounds where you need to make absolutely sure your opponent doesn't have mitigation to disrupt your plans, and should most likely lead to lethal damage and dead characters or set you up for some nasty shenanigans.

I think it'd be worth some consideration whether or not FIELD MEDIC should be a First Aid instead. The former is more versatility, but the blow-out potential of the latter makes it a powerful addition. You are almost certainly going to see your opponent focusing down Rose first, which in turn means that First Aid could become one of the best mitigation cards available to you (in the first round), while it is still a "field medic'ish" card although only playable on Rose.
7. BATTLEFIELD:

WEAPONS FACTORY ALPHA is always the obvious choice in vehicle decks. ENOUGH SAID! Well ... Docking Bay could be a far off secondary consideration in case the meta becomes super aggro and you need to recycle Suppressive Fire (but you are such a slow deck that you'll never get the claim anyways).
8. MULLIGAN:

An almost ideal starting hand would be comprised of: 1 Scrap Heap, 2 Resistance Crait Speeder (or a split between Crait Resistance Speeder/T-47 Airspeeder and Anakin Skywalker's Podracer), an Easy Pickings (or if the swap between First Aid and Field Medic was done, I'd also be very happy to see a First Aid in my starting hand) and a Friends in Low Places to ensure that I could slowly, but safely develop my early board state.

Do not mulligan all your vehicles out of your hand, even if you are not drawing into a 2 cost support. Keep at least one in your starting hand. Like any vehicle deck you need to ramp - that's vital.
9. HOW TO DEFEAT THE DECK:Killing Rose early is key. That will stop most of the ramp of the deck, but do not let yourself be deceived by the power of the Indirect damage and constant mill from the Jedha Partisans. If you suspect your opponent is playing with First Aid rather than Field Medic, it might actually be safer to go for a quick kill on one of the Partisans instead. If your opponent is forced into playing an early Second Chance it can go a long way to negate his ramp as well. Be careful with which dice you are trying to control and keep constant check on your deck size. Mill is a very viable strategy for this deck.