1. INTRODUCTION:While winter is coming in Denmark summer still rules in Spain. Madrid is an awesome city and is definitely worth a visit. Amazing tapas, great wine and the Destiny community is friendly, but fierce!

Our first reports indicated that there would be 160+ players in attendance at the event, which would have made it the world's largest Nationals event in 2018, but on the day, just 121 players registered, which means that the US Nationals 2018 with some 132 players attending remains the benchmark for Nationals.

Not much can be said about the meta which has not already been said in our tournament report from Polish Nationals 2018 (do check that one out as well), but the numbers are a bit different in the top cut, which I'll then be focusing on in my preliminary report!

Compared to Polish Nationals 2018, heroes fared somewhat better although still statistically underrepresented in the top cut. Just 5 hero decks made the cut, while 2 of those were 3wide hero mill decks. 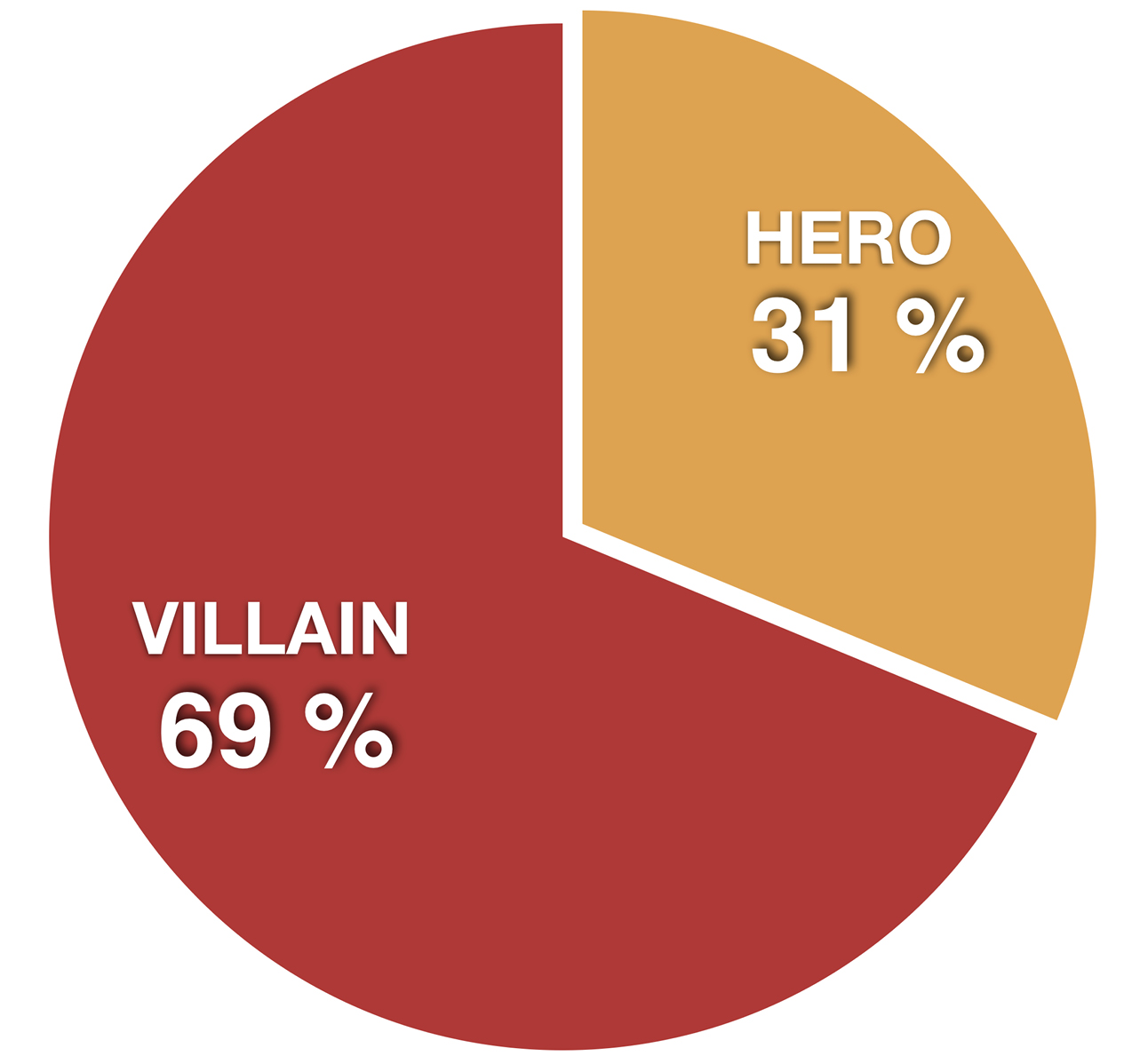 The meta definitely favors 3 wide character teams due to the high prevalence of huge Indirect damage sides and the relative absence of focused aggro decks, which can be punishing to low health characters. In the top16 at Spanish Nationals 2018, the distribution was not as lopsided as could have been expected, but still heavily leaning towards 3 wide teams. 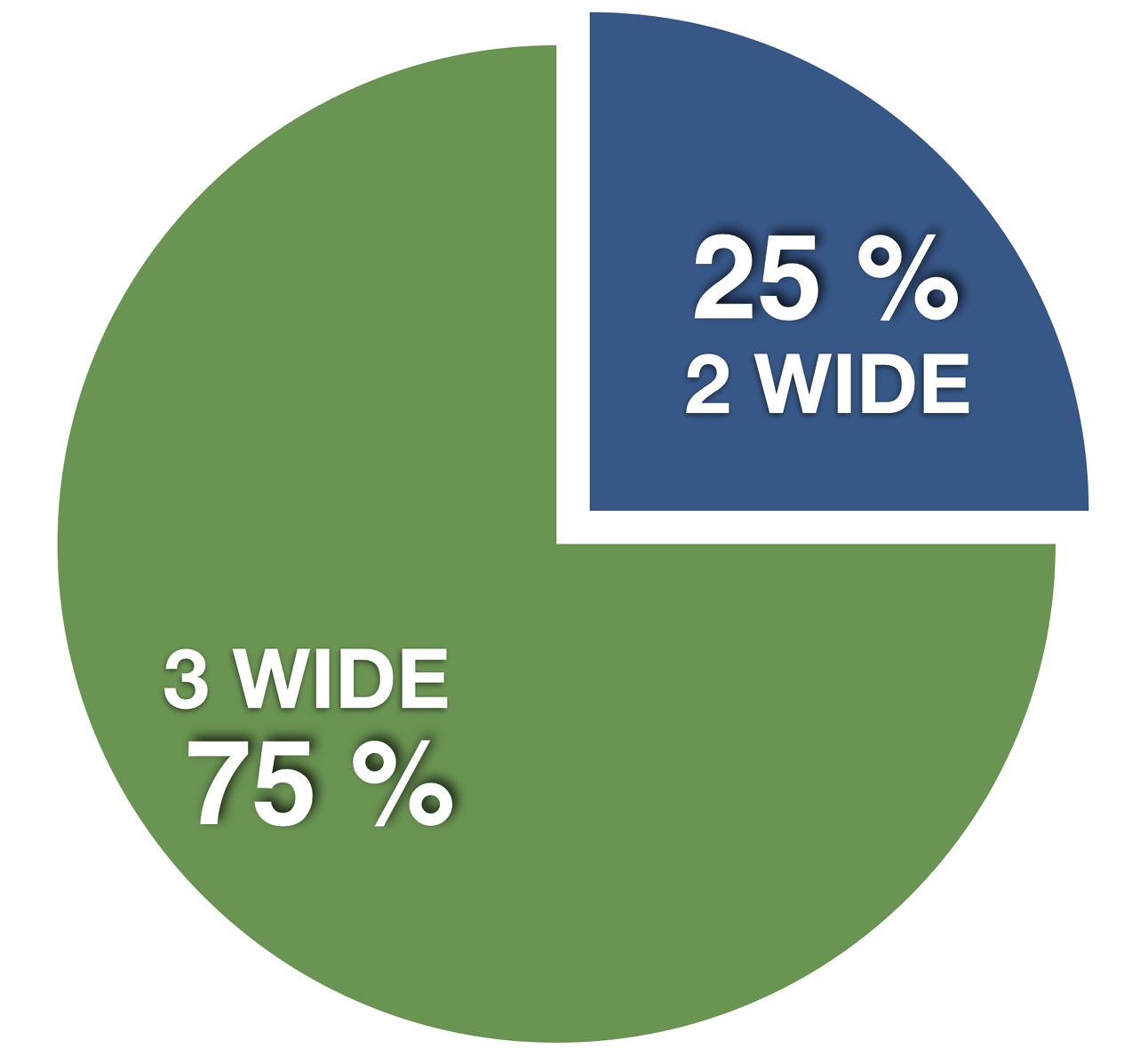 A big shout out to Juan Ferres Comino (second from the left in the top row), Arturo Martínez-Insua (far right top row) and Miguel Villaroya (far left bottom row), three of our awesome YOUR Destiny Peeps, who all managed top8 at the Spanish Nationals 2018!!!
5. TOP8 STATISTICS:Both eSnoke/Aphra/BD and Talzin/Mandalorians look like the indomitable decks to beat at the moment as they continue their streaks to dominate the European Nationals. The eYoda/Ezra/Rey1 deck also looks enticing.

It was definitely the hero decks that were the losers of the top16 keeping just one hero deck in the running with both the 3wide hero mill decks losing their top cut games against 3wide villain decks. Although eSnoke/Aphra/Battle Droid is not your average vehicle deck, it is still interesting too see how dominant it performs against what should be a hard counter: 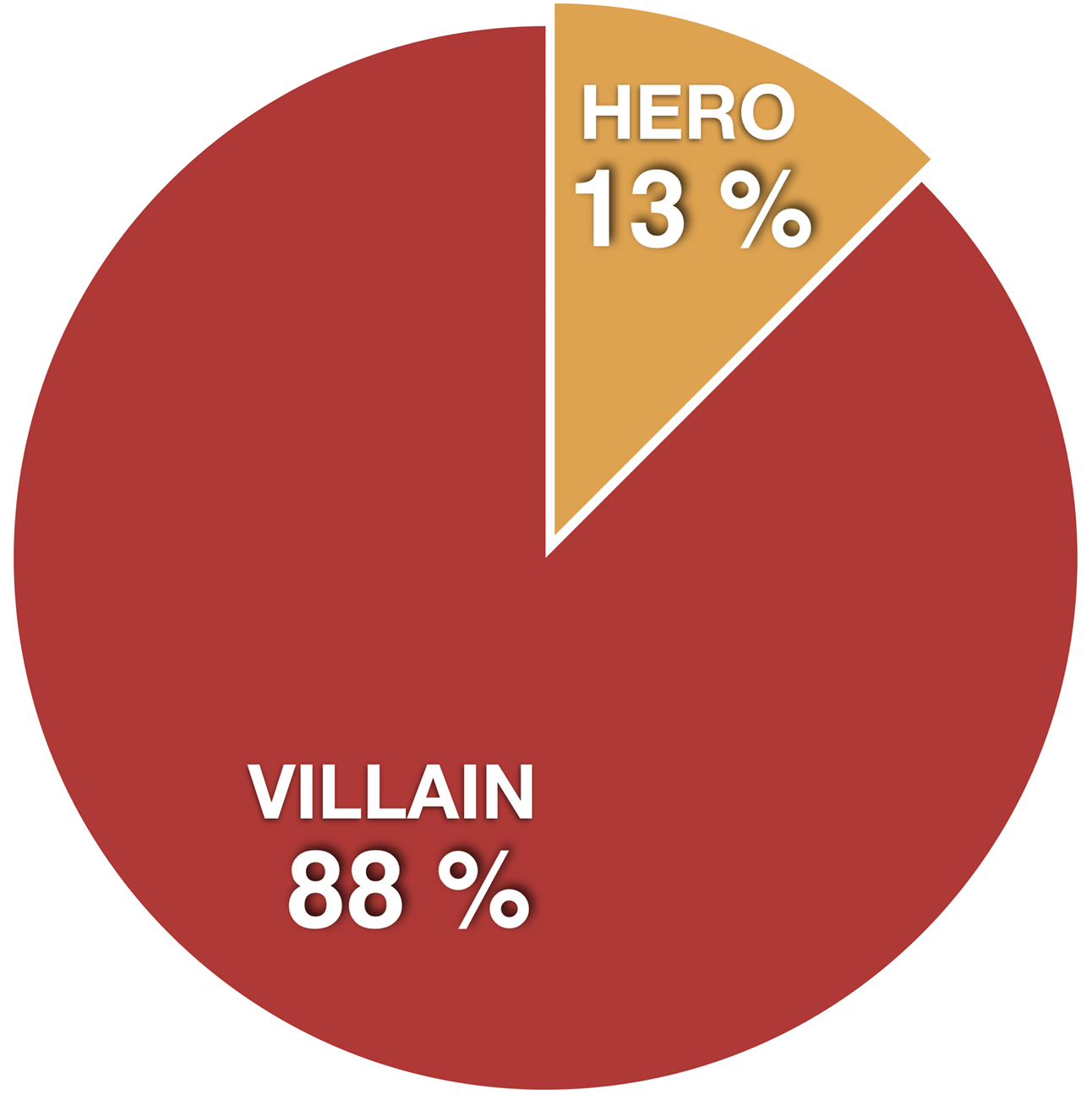 And as we move into the top8 we see how the comparative number of 3wide decks increase with just a sole eThrawn/eSnoke standing, which could (in some iterations of the deck) functionally be viewed as a 3wide deck due to Separatist Landing Craft which can add a Battle Droid to the line-up. 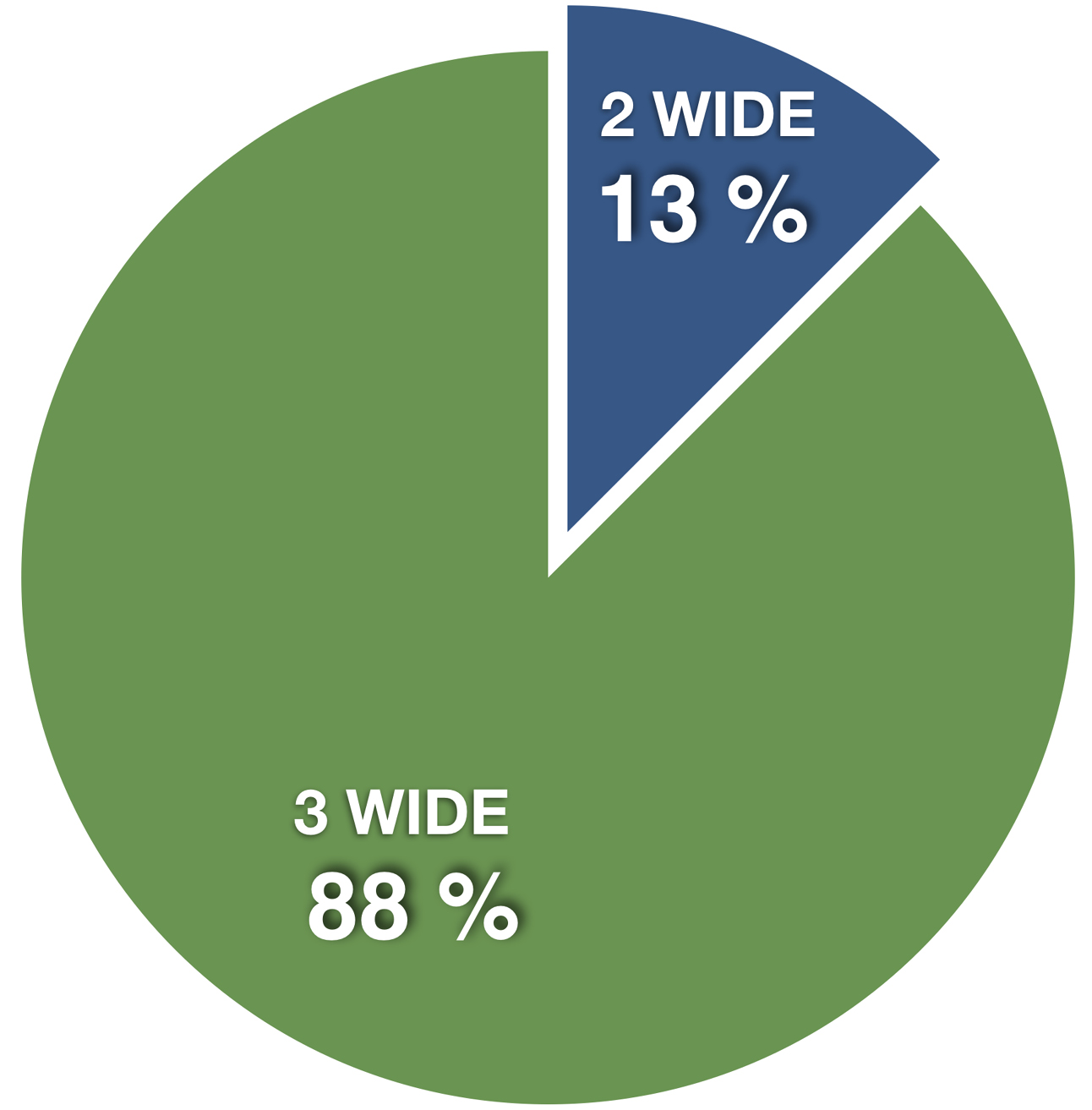 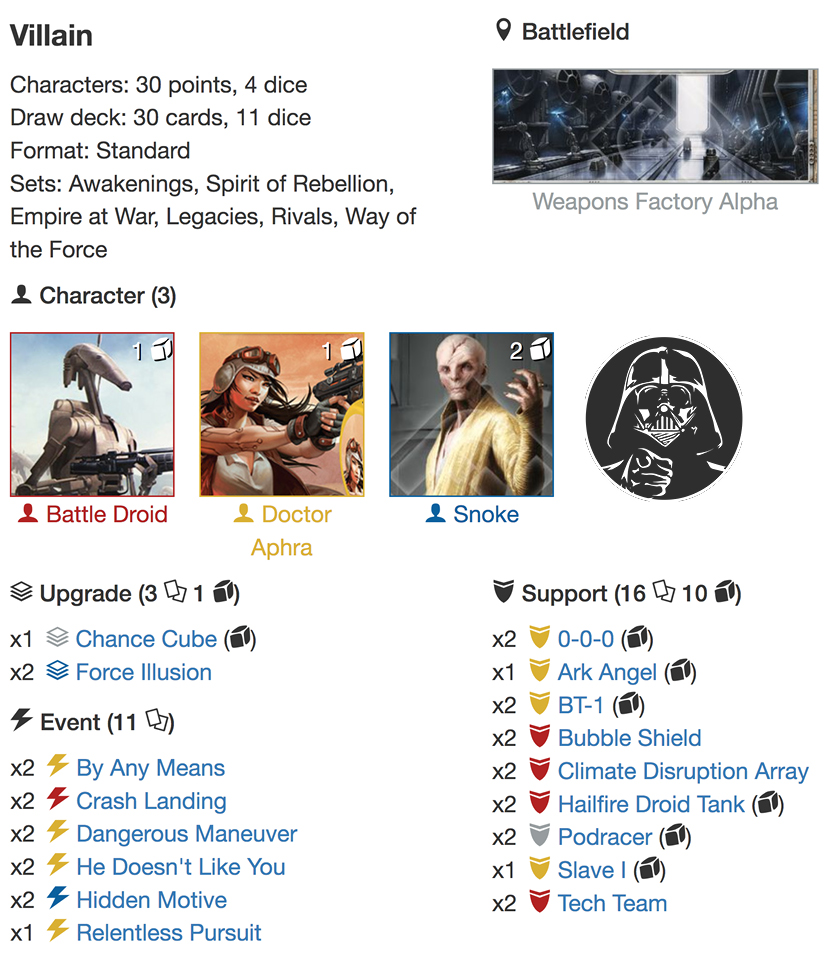 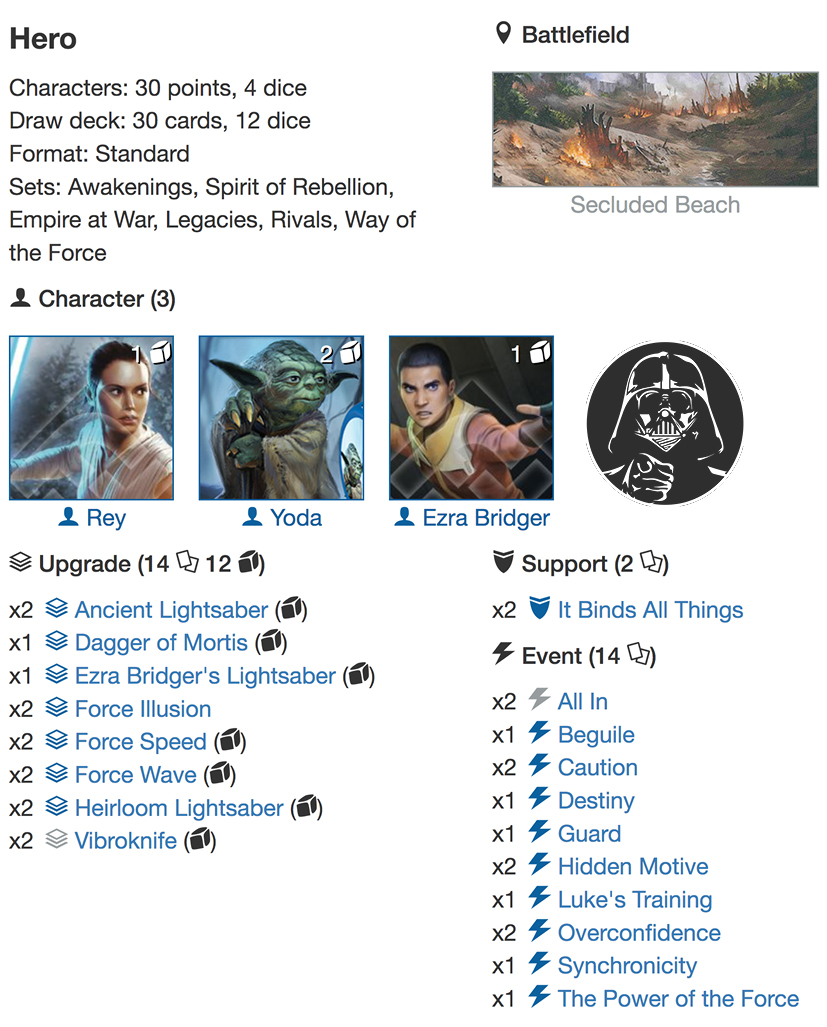 8. FINALS:Now, honestly who had expected to see eSnoke/Aphra/BD (Mario) vs. eYoda/Ezra/Rey1 (David) in the finals of a meta that did not seem to leave much space for heroes, albeit a somewhat different version of monoblue heroes than we've become accustomed to?!? 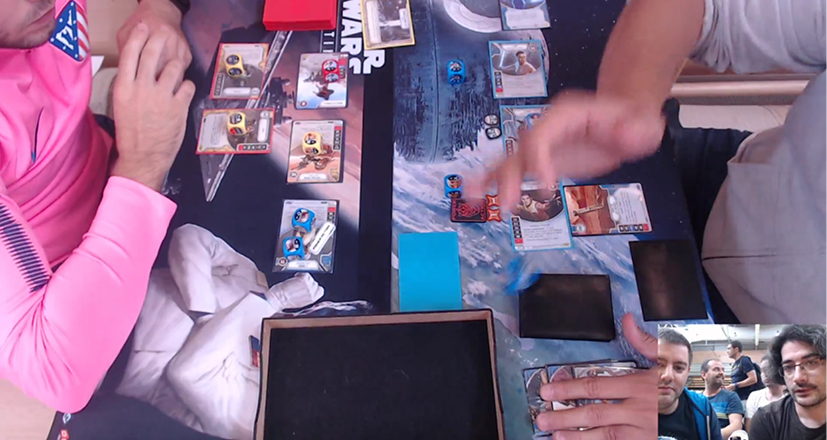 I guess I speak for most of the Destiny community when I admit that it was with a sigh of relief that I watched Yoda and partners muscle their way through a dark ocean of villains to seal its place in the finals of the Spanish Nationals 2018!

The eYoda/Ezra/Rey1 with its 28 health and ability to tank shields with Yoda's Special looked particularly well-equipped to handle the barrage of Indirect damage while still being able to ramp hard with upgrades (in most games he would have 4-6 upgrades down) - and the easy access to Force Wave looked particular menacing against 3 wide teams as well as utilising All Ins combined with Rey's Ambush ability to devastating effect. Inclusion of Vibroknife in a meta rife with Force Illusion also seems like a sensible choice!

No surprise to see a Snoke based deck to do well, but interesting to see how it was actually struggling against a upgrade based set up, and it was honestly some of the most exciting competitive Destiny I've witnessed in a while - and I pride myself of watching all of it. Game 3 in the finals was particularly intense!

There were a lot of great meta calls in the winning deck, including chosing Secluded Beach as the battlefield over Obi-Wan's Hut and combining consistency, health and speed in a single deck.

CONGRATS to Mario Moral Gil (right) for that incredible win and THUMBS UP to David Jose Iglesias (left) for keeping the hero dream alive! 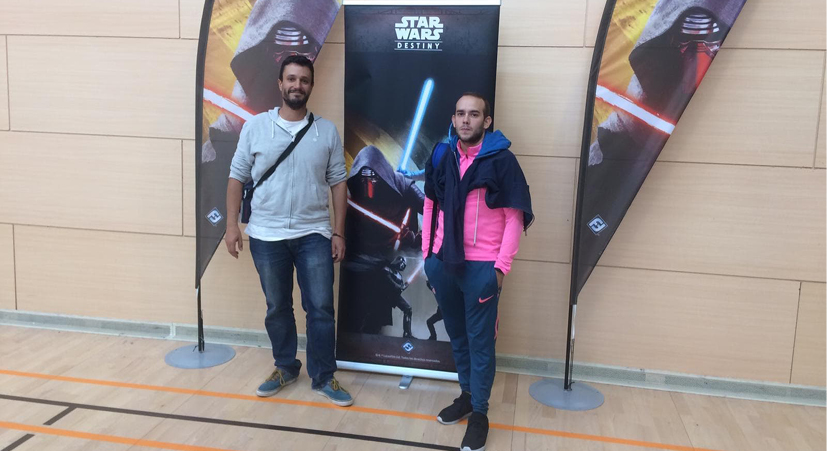