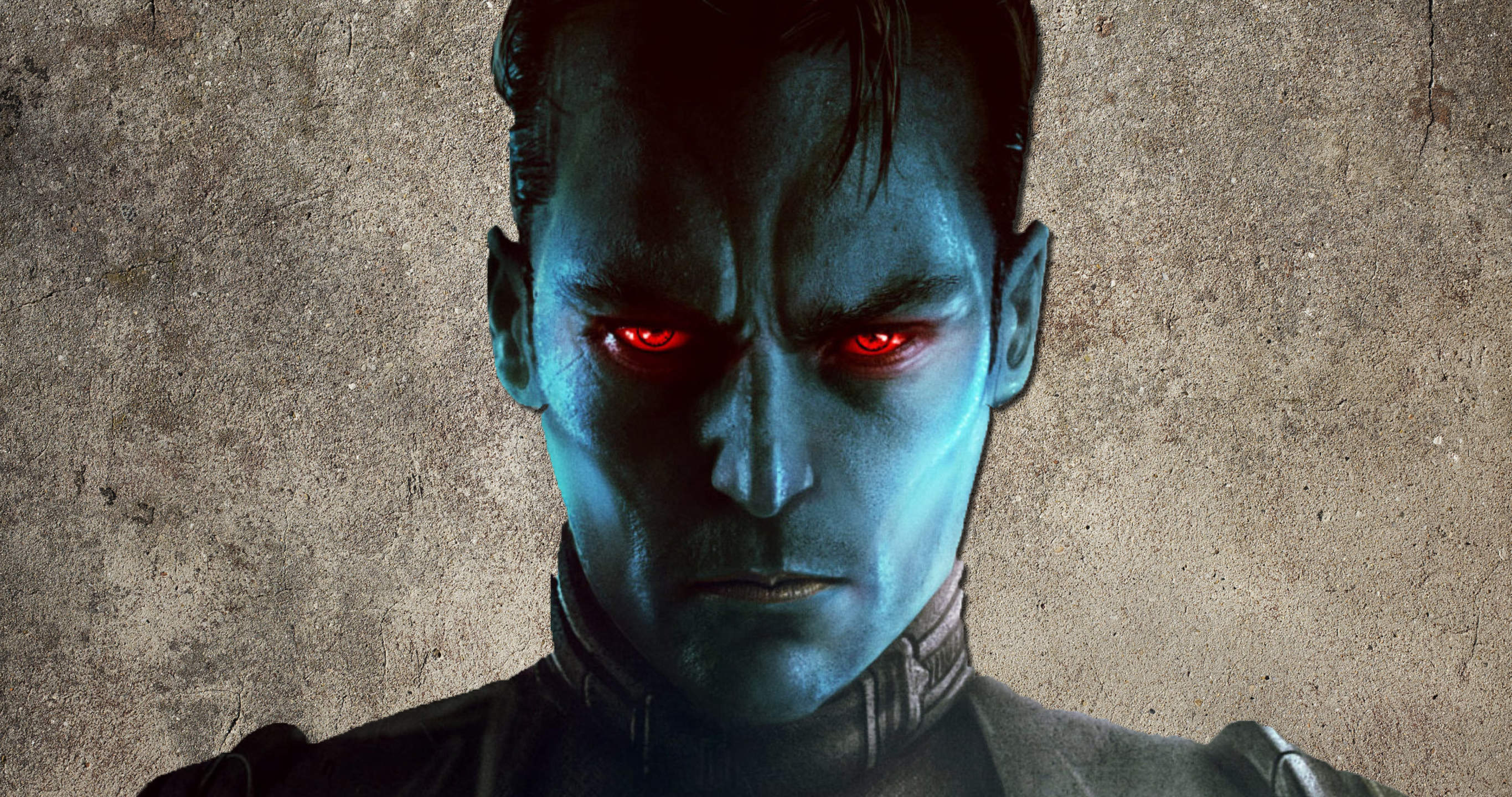 1. EDITORS NOTE:For some of our previous analyses of Thrawn, we recommend you read these articles, and while some of the context has changed, in a few instances significantly, it's still going to be worth your time (we promise):

The rest of the article is essentially an update to the previous Thrawn/Snoke deck posted (that deck was created shortly after the release of Way of the Force - and well ... things change!).
2. INTRODUCTION: 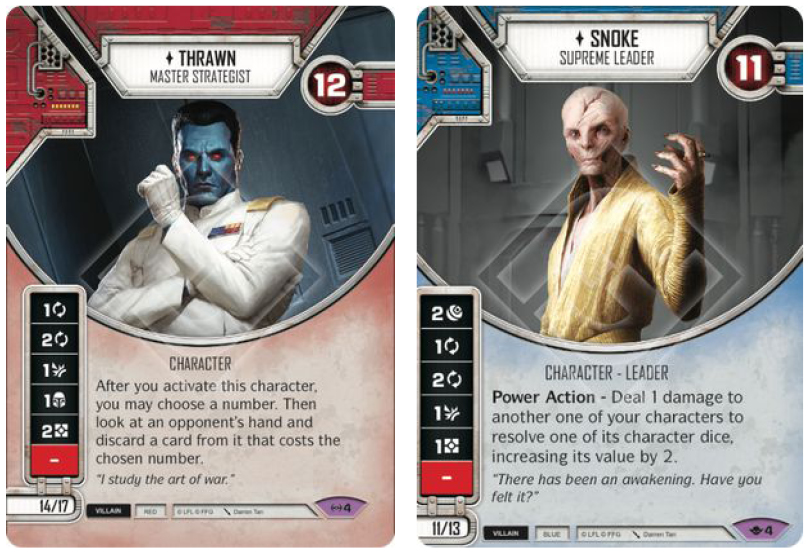 I've played this deck since the release of Way of the Force and enjoyed every moment with it. The possibilities with this character setup just feels endless. The list below is the one I played at the German TTS league (Top 8), German Nationals side events (won one), the German Nationals 2018 (went 3-3) and the Outer Rim Circuit.

In the Outer Rim Circuit I had some great games combined with a little bit of luck, so I managed to take it home. I was paired against Phasma/DJ, Ploo Koon/Padawans, Thrawn/Snoke and Millionaires.

In the following article, I will go through some of the changes to my original Thrawn/Snoke deck and explain why I prefer this setup.

Shout out to Tobias Winter and David Levy, both part of the YOUR Destiny Testing Group, who were great discussion partners during the deck building process.
3. ERASE AND REWIND:The first and biggest change to my deck was cutting Witch Magick. Leaving the restrictions of the quota between odd and even costed cards opened up so many different options. While Witch Magick is an excellent card it is highly prohibitive and is clearly best suited for Mother Talzin decks. When I constructed the original version of the deck I was probably still too influenced by the philosophy that drove Thrawn/Talzin.

The second overall change was cutting the „tempo“ cards: All In and Tactical Mastery. Thrawn already discards one removal card on activation and by adding Probe, playing around removal isn't important anymore since even a hand dense with mitigation will be obliterated regularly.

After listening to the YOUR Destiny Podcast Episode 10, I starting experimenting with low cost vehicles, droids and flanking maneuvers. In combination with now having access to the entire card pool (by cutting Witch Magick), I could now get my hands on a bunch of great vehicles. For example not including the Hailfire Droid Tank in the original build seems straight up stupid from my current point of view.

The development of the deck list basically looked like this (from early Way of the Force meta to mid-Nationals season):

You can find an enlarged copy of the final list at the end of this article!
4. UPGRADES: 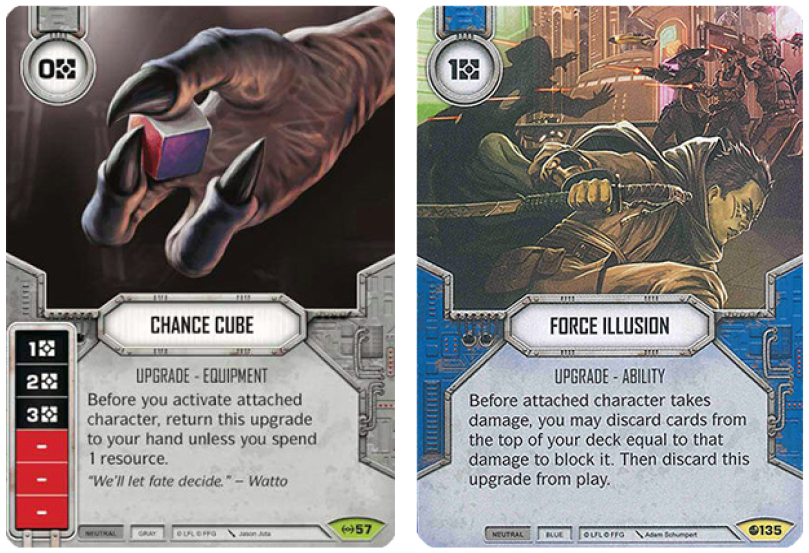 We are retaining the same two upgrades from the original list because they are both essential to the deck. CHANCE CUBES coupled with the myriad of Focuses on both Thrawn and Snoke are just stupidly good and FORCE ILLUSION is for very good reasons probably the most played card at the moment in Destiny.
5. VEHICLES:

A single AT-DP replaces the Fang Fighter. The die is similar and it has a great Special to counter some of the other vehicle or mill decks, and although it is restricted to 2cost or cheaper supports, it still takes care of C-3PO, Anakin's Podracer, BT-1 or 0-0-0, it feels just awesome, and can have a huge impact on the course of the game.

GROUND BATALLION:
This support has a die with 4 great damage sides and an extremely useful ability. If you play on your own Battlefield, you will basically always benefit from it, just activate, take control and reduce the cost of a vehicle. It's great in a vehicle mirror match and also provides some help against Kylo/Pryce, barring Arihnda Pryce from maximising gain from her Special unless she claims the Battlefield. 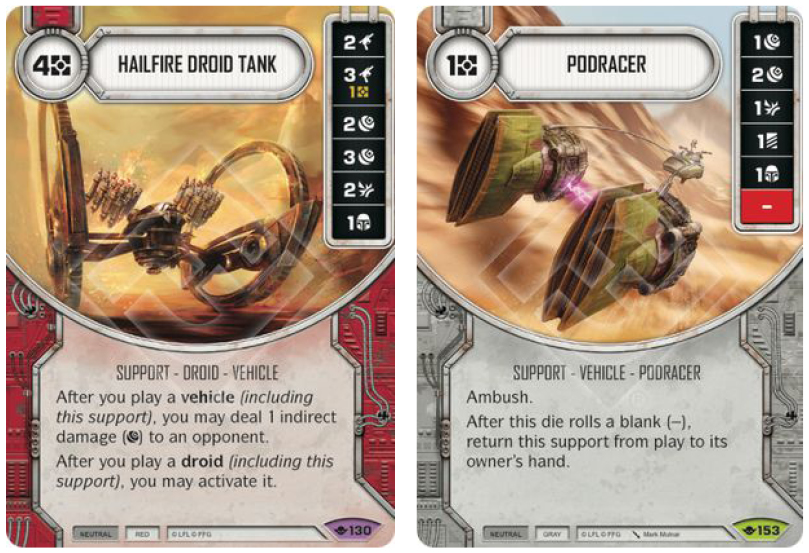 HAILFIRE DROID TANK is really a must include in every single vehicle deck. If you get one or even two of those vehicles out Round 1, the damage pressure is incredibly high. Especially if you play two and combine it with the Podracers. The Indirect damage can add up pretty fast.

PODRACER:
I like both the die and the ability of this support. Sometimes it is annoying to get it back into your hand, but at other times it can save your ass against mill or when you just need one more cards to pitch to re-roll. For just one resource the two Indirect damage sides as well as the Disrupt/Discard sides are awesome. The Ambush helps if you need to set up a vehicle fast for Pinned Down or want more Indirect damage from a Hailfire Droid Tank or a Planetary Bombardment.

And we keep the ARC-170 STARFIGHTER for plenty of good damage sides, as well as the PLANETARY BOMBARDMENTS and a single AT-ST for that immense direct firepower they offer.
6. EVENTS: 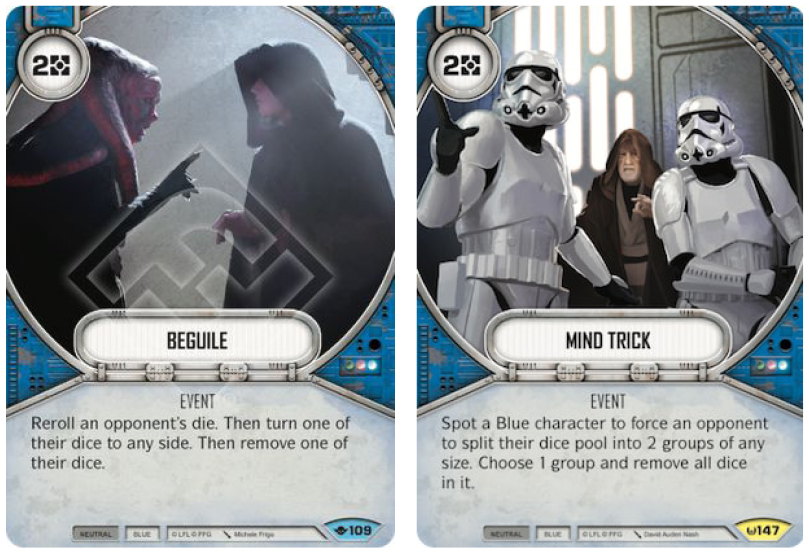 BEGUILE and MIND TRICK are your two most important removal cards. They affect multiple dice and most of the time a well-timed Mind Trick will remove 2-3 dice for just 2 resources. The timing of play is very important though: Do you wait for another die in the pool? Or do you go the safe route and play the Mind Trick early? There are times where I have played it on a single die, i.e. in the mirror to stop a Snoke Power Action. In most instances you do not want these two in your starting hand.

BOUNDLESS AMBITION:
Ramping up is much better if you can spend your gazillion resources on 5 fresh cards. I've been going back and forth on whether Count Dooku's Solar Sailer can fill a similar role and I really like the alternative. Both are viable I guess, and it feels like it all comes down to personal preference. Boundless Ambition is the more focused of the two whereas the Solar Sailer is more flexible.

THE BEST DEFENSE... vs. UNDER ATTACK:
Both cards have the potential to remove several of your opponent's most important dice for just 1 resource and sacrificing health. In the current meta I'm leaning towards The Best Defense... simply because of the dice with massive Indirect sides floating around, and everybody knows how important a well timed The Best Defense can be against Yoda or any of Snoke's sidekicks.

In my latest version of the deck, I actually switched out The Best Defense... for a second Overconfidence. I guess, you have a point of view until it changes! 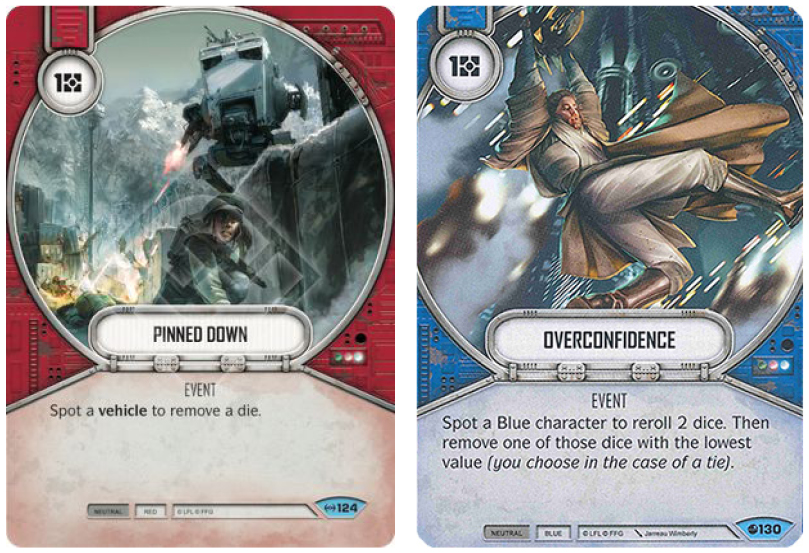 Because we are now having a much larger pool of vehicles we can now add PINNED DOWN to "replace" Witch Magick, while OVERCONFIDENCE is now a one-off, but if you do decide to mix up the upgrade suite a bit it could easily become a two-off.

PROBE vs. GRAND MOFF:
Probe is currently a HIGH-value card for red villain decks. Getting information and possibly discarding two removal cards is great. Especially if you already know the content of their hand (and you do!). It is functionally the "lighter" version of the Grand Moff – Jedi Temple combo. Probe would then incidentally be the cards I would cut in the deck, if I were to pursue the Grand Moff route. I do NOT think you can afford both in a 30 cards deck.

Let's discuss the pros and cons of the two versions: 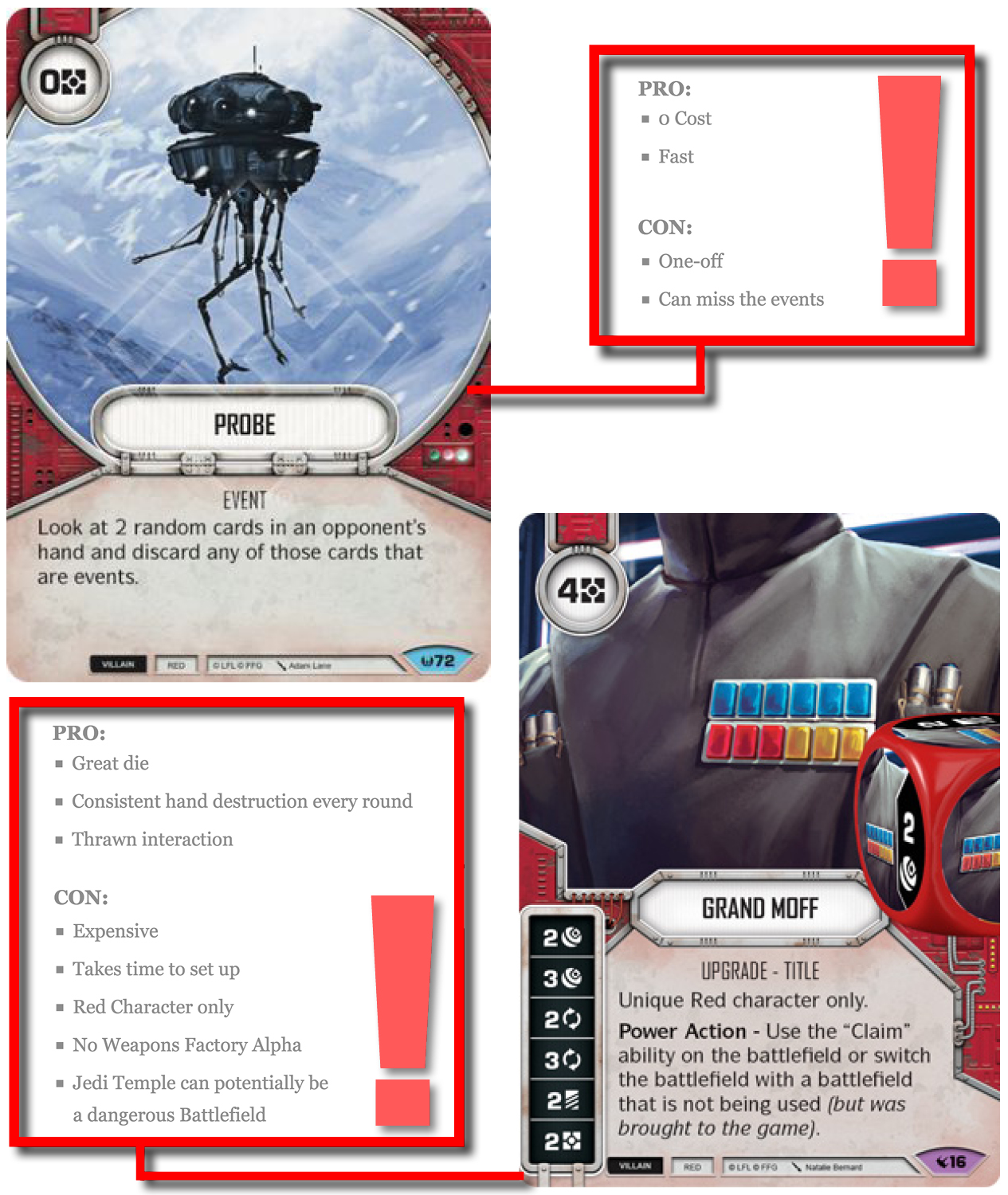 If do you decide on including the Grand Moff, remember to use the ability at the start of every round to get the most benefit out of it. I have seen people use it later, which doesn't make much sense in my opinion.
7. QUESTIONS REGARDING THE LIST:Is DARK RITUAL still worth including since people tend to play around it?
Is the Grand Moff combo so powerful that it should replace Probe?
Should you include Sudden Impact or Force Wave? 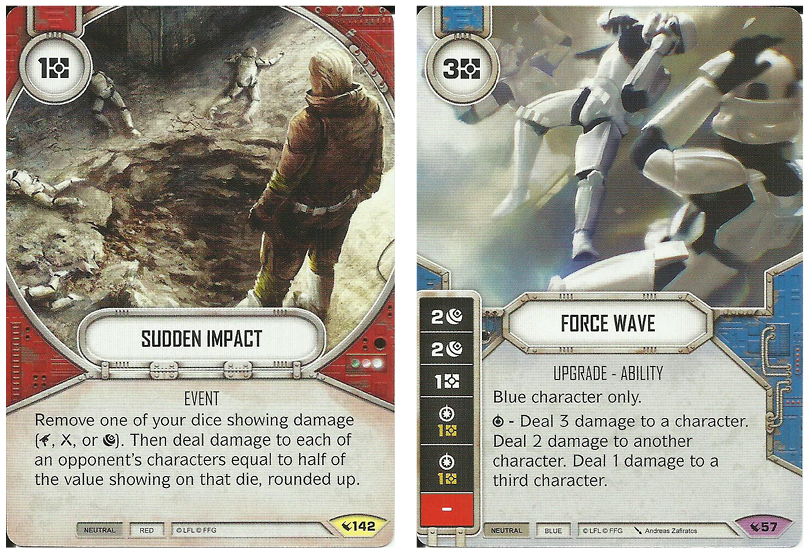 I am pretty convinced though that IF you decide on Grand Moff, you should also add the Force Wave, because your opponent will then have to choose between two juicy targets.

My alternative list with the inclusion of both Grand Moff and Force Wave would then look like this: 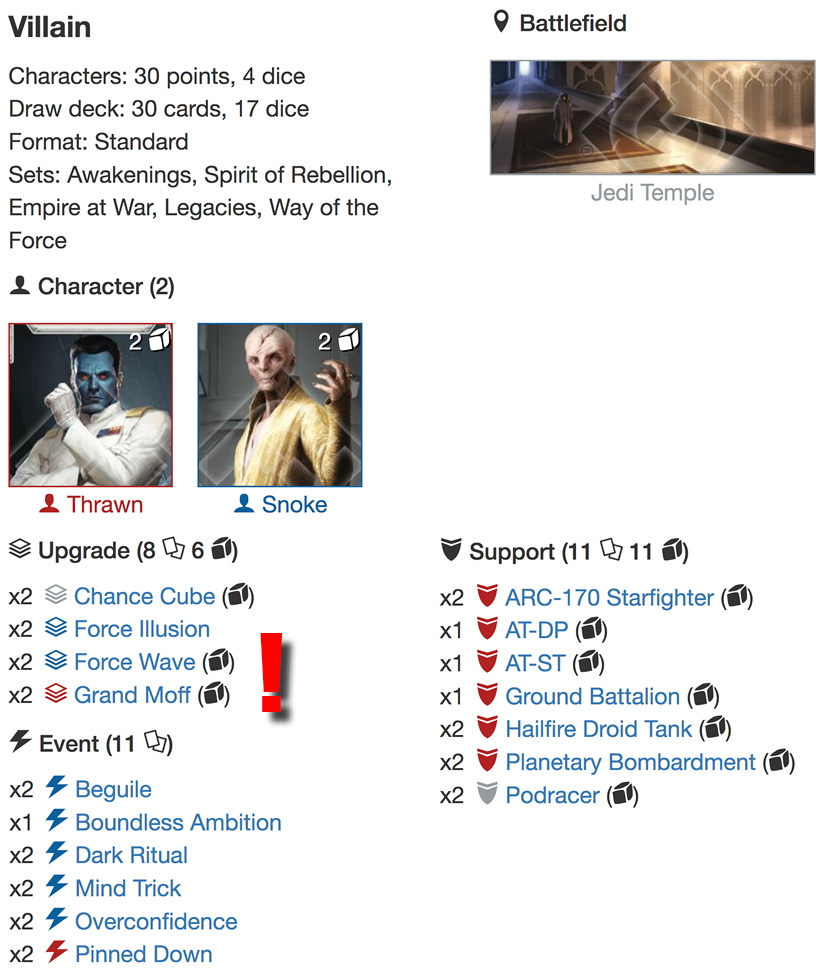 8. MATCH-UPS:I feel that the Thrawn/Snoke deck is capable of adapting to nearly anything in the meta. I'll try and run through some of my experiences with your Thrawn activation in a few of the possible Gauntlet match-ups. (Click the character pairings to go straight to our deck analysis of those decks respectively).

Yoda/Cassian/Anakin:
Although you are playing a vehicle deck, it seems to work quite well against 3wide hero mill. Try to mulligan for a standard hand (Moff/Probe, Cube and Vehicles with one exception: As Mads Utzon told us in his article on "how to defeat mill decks", you do not really want mitigation against mill. Except The Best Defense... in a few instances.

The magic number to call is 2 in the first rounds and 3 later on. 2 for Beguile, Entangle, Anakin's Podracer and Force Meditation, while 3 takes care of Hyperspace Jump and Second Chance. On one hand you stop him from removing multiple die or on the other you can slow down his mill. In my experience a 2 is always in his starting hand. IF Thrawn rolls out 2 of the same symbols, it can be ok to call 1 to stop the Easy Pickings play. 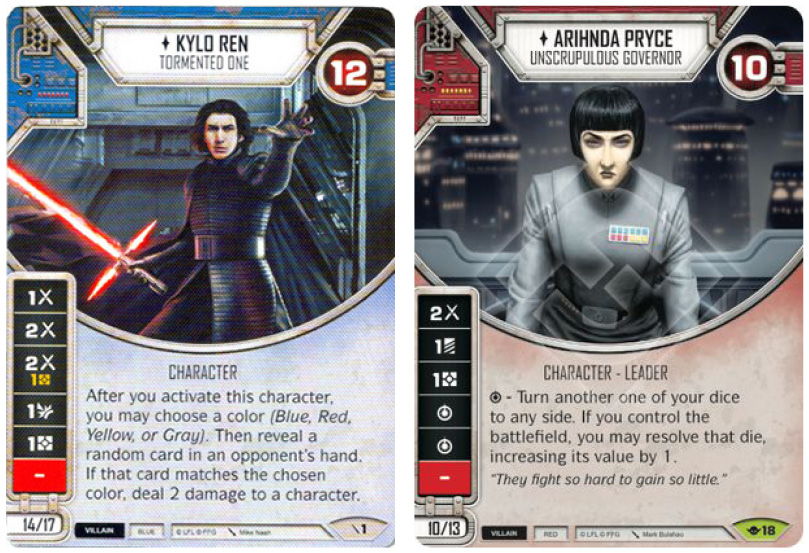 Kylo/Pryce:
Calling 0 is crucial in this matchup as long as Close Quarters Assault is still a threat. You will probably lose a Thrawn die in that case, but a well placed CQA hurts much much more. Ground Battalion is something that has helped me out a great deal because it stops the full power of the Pryce Special. Most importantly: Don't let him get the throne room – so try to roll well for initiative :-D 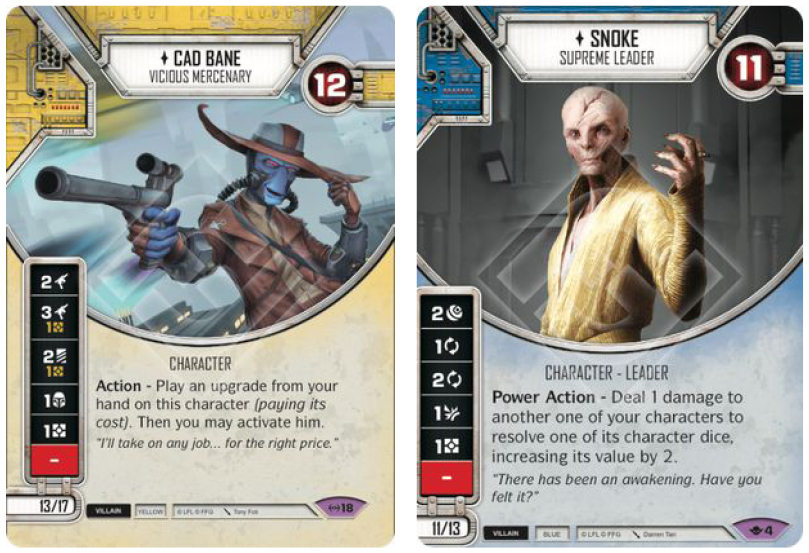 Cad Bane/Snoke:
Most of the time you want to call 0 to get your ramp going and stop his tactical approach (Friends in Low Places, Truce, Bait and Switch, Take Flight, Force Speed), but in some cases if you need to slow him down, calling a 2 to snatch those weapons from his hand can also be ok. Calling 2 will hurt though if he has made his hand dense with 2drop upgrades. If you do not have any mitigation cards or just a Force Illusion, you might as well let him cheat his damage out and get on with your life. 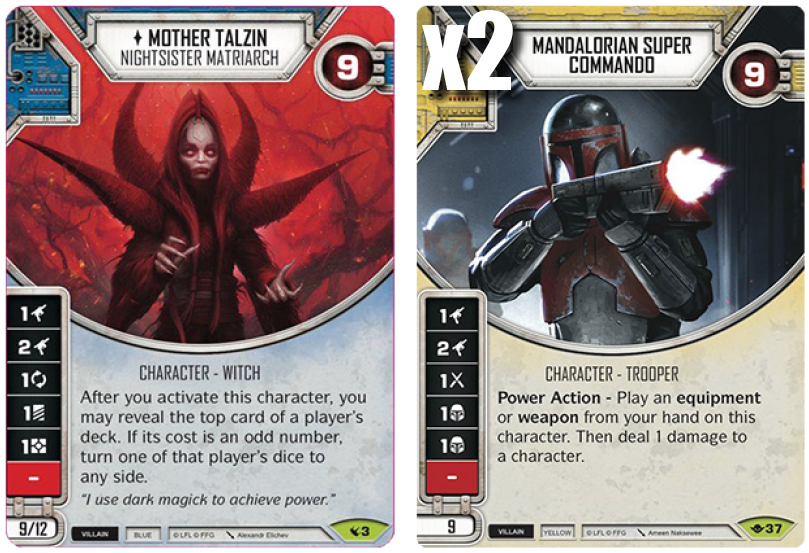 Talzin/Mandalorians:
This is a hard matchup in my experience. The call is easy though: Mostly it is 1. If you know they have a Holocron or a Chance Cube in hand you can call 0 instead. Force Wave/Sudden Impact is what you absolutely need here.

3wide Snoke Vehicle:
His removal kit is mostly 0, but stopping a Force Illusion, Tech Team or the BT-1/0-0-0 combo being played out can be a better choice when you activate Thrawn. Against Bazine/Snoke/FO, I sometimes even call 6 to stop the Planetary Bombardment or AT-ST I was expecting.

I could continue the list, but I think you get the point. ALWAYS think about which cards can hurt you the most and call for it. If you want to be successful with this deck, you have to follow the meta and know what is coming for you. I would not be surprised if Thrawn/Snoke gets stronger and stronger again, because most of the meta secrets have been revealed and we are at a point where the main framework of the meta decks does not seem to change too much. Happy Hunting!
9. THE LIST: 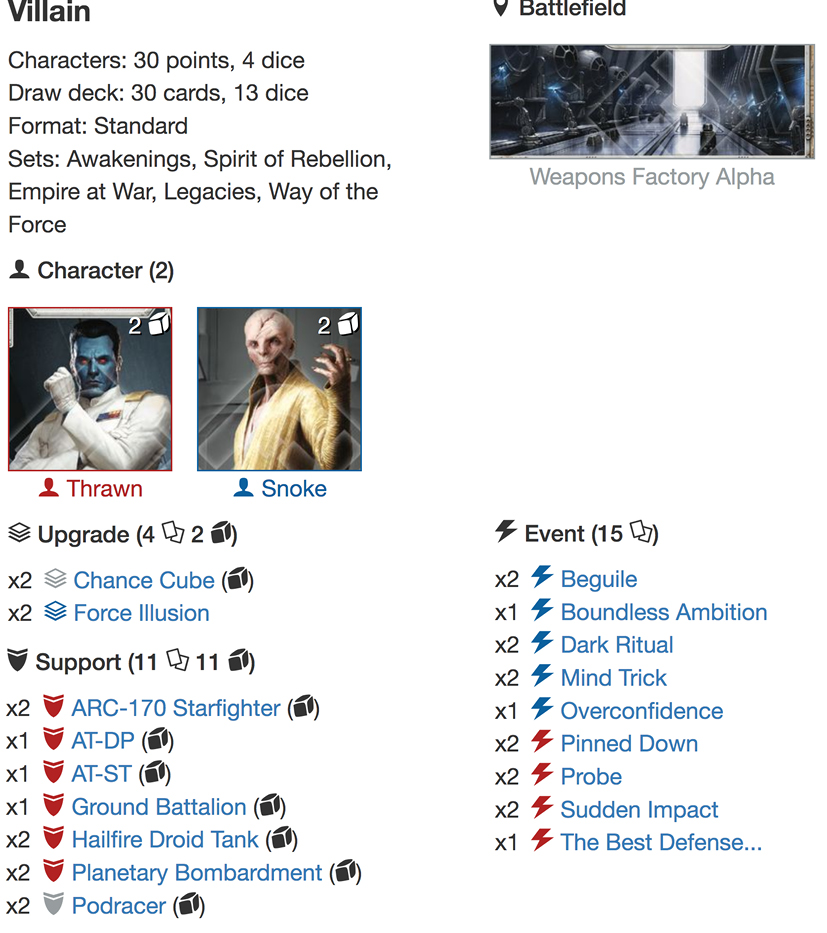