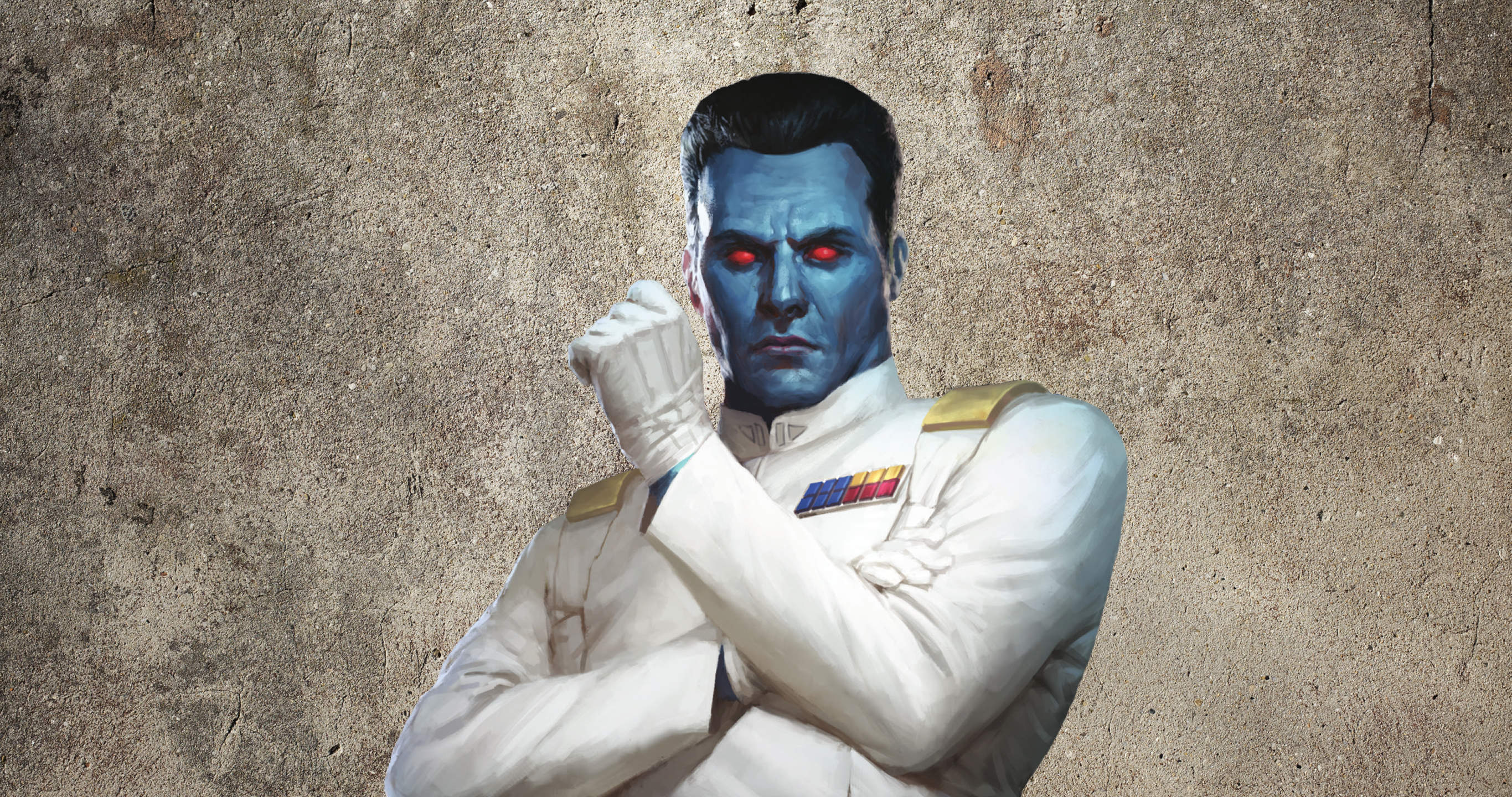 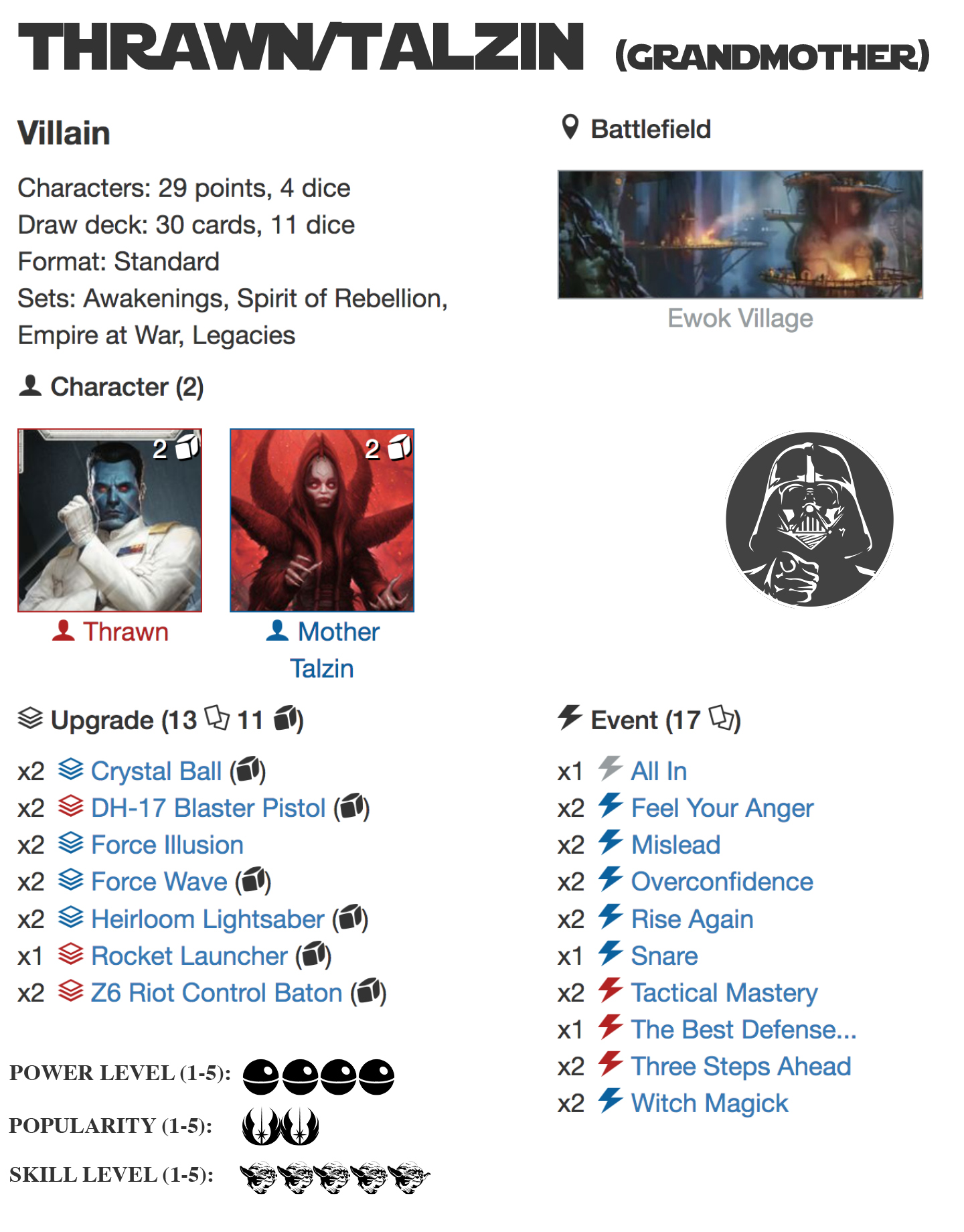 For the sake of clarity I use male pronouns throughout the text. I’m fully aware of female Destiny players out there, with Christine Hölz we have one of the best in the YOUR Destiny Test Group: "The European Gauntlet".
1. CREDITS:The first version of this deck that came to my attention was played by Jonathan Magnusson on The Destiny Councils YouTube page. Since I’m a huge fan of everyone’s favorite blue alien, I had to try it out and it’s pretty much the only viable combination for the Chiss (Thrawns race, but you already knew that) since Unkar Plutt got nerfed (and righteously so, Thrawnkar was the biggest Negative Play Experience in all of Destiny, if you ask me).

Nowadays, there are a couple different versions of this deck around, including one that made Top 16 at Euros. That version ran vehicles instead of upgrades, but I haven’t had the chance to look further into it.

Also listen to the YOUR Destiny Podcast Episode 12 for some insights into playing this deck.
2. GENERAL COMMENTS:On the one hand, the deck is incredibly tough to play at a high level, especially over a longer period of time (like an 8+ round tournament). With Thrawn’s ability you’re basically playing two decks at the same time. In order to do so, you need to be comfortable with playing long hours during tournaments without losing your focus.

On the other hand, no deck feels so rewarding when played well! Undermining your opponent’s game plan, denying them their most valuable assets and crushing them with some of the best weapons in the Empire’s arsenal is just a fun way to win games. At least for you.

The goal of the deck is to soften the enemy main character before killing him in one big swing. It is essential to stick to this plan for as long as you can and to know every card in your opponent’s deck that is capable of ruining your day.
Watch Tobias Winter's Top16 match playing Thrawn/Talzin at WORLDS 2018 here: 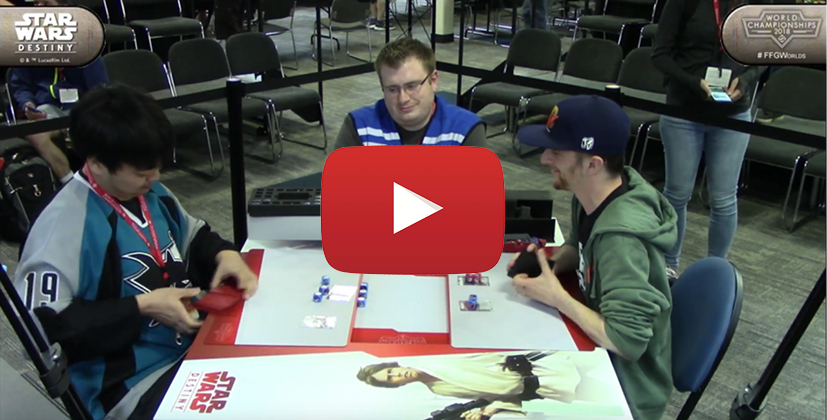 3. CHARACTERS:THRAWN:
12 HP for 17 points elite is great, but his die is probably the most unusual in Destiny for a main character, because he has no damage sides. His ability is what makes the Grand Admiral so powerful. Ripping a key card from your opponent’s hand is the strongest ability I can think of - with one little caveat: You, the player, determine HOW powerful Thrawn’s ability actually is. Your knowledge of the meta is the ceiling for this deck. Most of the time you want to get rid of removal, so learning the removal suites of the most common meta decks is a good starting point if you want to pilot this deck to success.

And remember: You use his ability AFTER you roll out his dice, so if you’re playing against yellow hero and you roll the same symbol twice, say 1 if there are not two Easy Pickings in his discard pile ;)

Other important facts about playing Thrawn in shorter form:
1) Look at your opponent’s discard pile and think about what could be left in their deck/hand. Every time before you activate him. Every time, trust me.

2) Remember your opponent’s hand to the best of your ability. At least try to sort the cards in sensible groups if you can’t remember all of them by name (e.g. two upgrades, a single two cost removal, a card he cannot play anymore because of a spot requirement etc.).

3) Thrawn’s double Resource side is THE thing that keeps this deck running. You need upgrades, so take resources whenever you can. 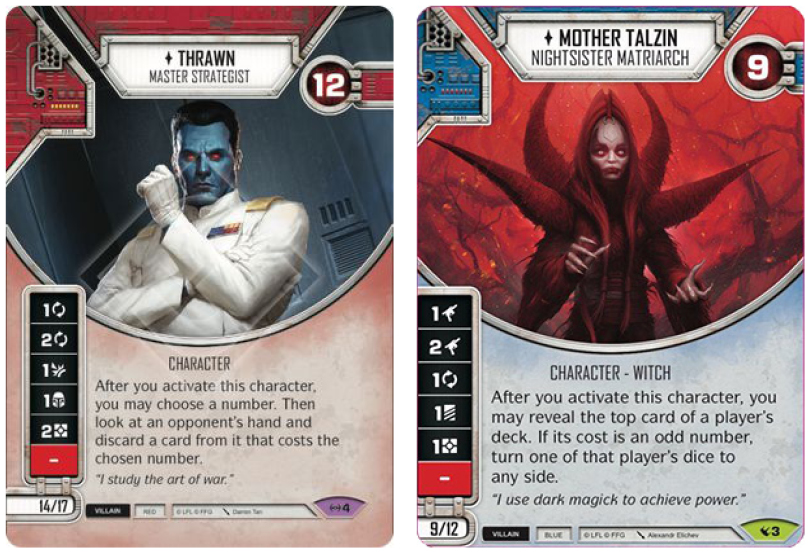 MOTHER TALZIN:
Our main damage dealer and dice fixer! This mean lady is one of the powerhouses in Legacy. There are a tons of decks with her out there and with each expansion she only becomes stronger by increasing the number of good odd-costed cards. In this deck she has the full 30 odd cards to play with and every tool available to keep her alive as long as possible. Most of the times she will be the first target (9 HP is a bit flimsy), so save your Witch Magicks and Force Illusions for her. If Talzin goes down before your opponent's main character is dead, you’re in trouble.
5. REMEMBERING YOUR OPPONENT'S HAND (PART 1):Just to test you! You have activated Thrawn and are playing against Drive-by-Shooting, and you guess 1! You see your opponent's hand, and these are the cards:

You decide to discard the Easy Pickings to protect the dice of Mother Talzin who is yet to activate. The following turn your opponent plays the Rally Aid. Now remember the rest of the cards.
4. UPGRADES:Before I'm going through the upgrades included in the deck, I want to talk briefly about my reasoning for NOT including Chance Cube.

Sure, getting two additional resources each round is great, but you have to invest one each round to start with. If Chance Cube gets mitigated, the loss of that one resource can ruin your entire plan, especially in the early stages of the game. And if you look at all the other upgrades in the deck you’ll find two things: damage and focus. Chance Cube provides none of those things. And last, but definitely not least: It is not an odd costed card! I don’t want to worry about not hitting with Talzin’s ability or a Witch Magick healing only two, I prefer absolute reliability!!

FOR STARTERS:
Redeploy upgrades go on Mother Talzin, everything else on Thrawn. In reality it’s not that easy, you’ll need a lot of repetitions to get a feel for where to put a weapon in a specific match-up. 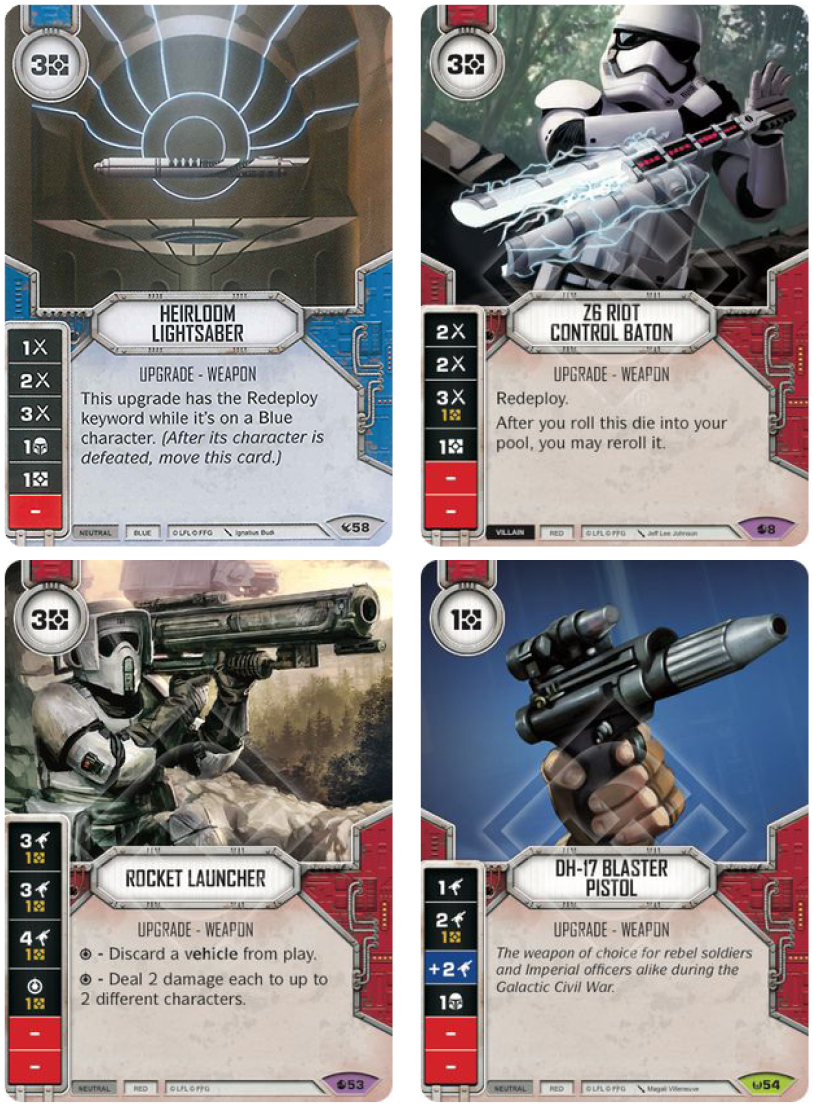 Force Illusion: Absolutely self-explanatory, one of the most busted cards in Destiny.

Crystal Ball: With its two Focus/Resource sides it helps your overall game plan by ramping into big upgrades and killing characters in a single big swing, either when you know your opponent is out of removal or you can cheat out actions. The ability is nice as well, it provides additional information for the grand admiral’s master plan.

DH-17 Blaster Pistol: The best weapon in the game, period. It’s cheap, it’s odd costed and it deals two damage every time, even when Talzin is dead. No.1 mulligan target! (remember to read our article on mulligan strategies).

Force Wave: A necessary evil. With the little damage your starting dice can do, three or even four wide decks are hard to cope with. That’s the reason Force Wave is included, even though it has a major downside: You have to play it on Talzin. Another reason why I would have prefered a second Rocket Launcher in its spot is the fact, that the special is a third damage type (besides range and melee), taking an additional action to resolve.

Heirloom Lightsaber: It has redeploy on Talzin and a free 3 Melee side. After DH-17 your favorite weapon for your starting hand.

Rocket Launcher: You really want to play two (see Force Wave), but its pay sides make it the first of the expensive upgrades you can cut. Otherwise great on Thrawn to finish games after Mother Talzin is dead. Combined with a DH-17 that’s six to the face every round.

Z6 Riot Baton: Another redeploy weapon with a three side. The re-roll comes in handy, but is not really necessary in this deck. Heirloom number 3 and 4...
5. EVENTS:MITIGATION CARDS:

Our removal suite consists of Feel Your Anger, Mislead, Overconfidence and a single copy of The Best Defense. If you want to be able to remove a specific die without your opponent re-rolling first, possibly keeping the dangerous die on the board, you could swap an Overconfidence for a Spell of Removal, but I don’t like discarding my own deck and Overconfidence affects two dice (even your own… your weapons have huge sides and even Thrawn’s dice have pretty high numbers). There’s a lot of personal preference here, but I’m settled on these particular cards for the foreseeable future. (Do remember to check out Mads Utzon's talk about the so-called "Overconfidence Battle" in the YOUR Destiny Podcast Episode 13). 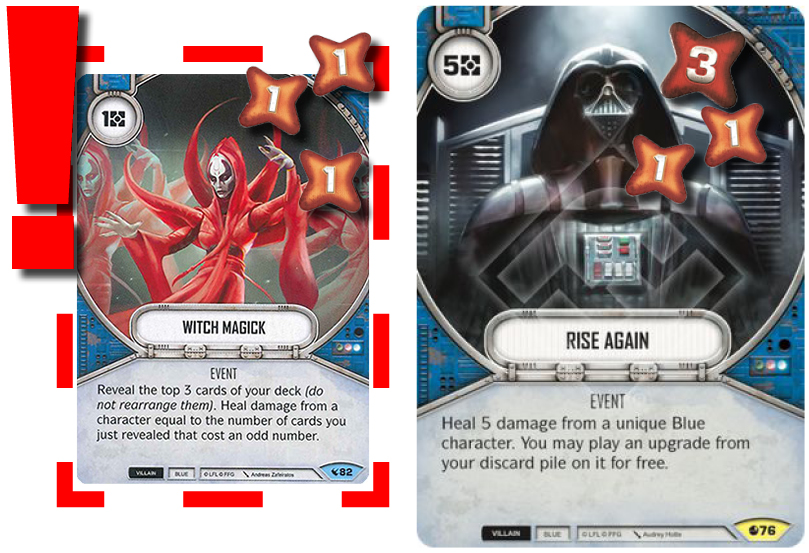 Witch Magick needs no explanation in this deck, it’s flat out BROKEN. Rise Again is a different beast and I tested several versions of this deck without it. Two thirds of the time it’s just a pitch-to-reroll card, but if you do get to play it, it wins you the game. If Boba/Seventh has an explosive start and you know you have it coming, pitch your upgrade, save the resources for the second round and watch their face melt when Mother Talzin comes back with a vengeance. If there’s one deck that can take eight damage to the face and completely heal up at the start of round 2, it is Thrawn/Talzin.

TECH CARDS:
Snare: I don’t think I need to explain how much fun it is to play Tactical Mastery into Snare when your opponent is about to activate a fully loaded Kylo. But still, this is a flex spot in the deck and could be an additional removal or even a second All In. I like the card, because it annoys my opponent (as does the rest of the deck), and grumpy opponent’s often make bad decisions…

Tactical Mastery, Three Steps Ahead and All In: These are your game winners, never cut one of those!
Just a quick example of how powerful these events can be:
1) Play a DH-17 on Thrawn, grab a piece of removal out of your opponent’s hand and deal at least 4 damage to Aayla.
2) Start your second round by activating Thrawn (it is completely irrelevant what you roll) and call 1 to snatch the Force Illusion out of their hand.
3) If your opponent has no possibility to heal or shield Aayla you can guarantee the kill.
4) Tactical Mastery, activate Talzin, turn Thrawn’s die to a double focus.
5) Play All In as your second action, resolve three focus on your damage dealing dice and kill Aayla.

The same goes for Three Steps Ahead if you have three resources showing. Imagine the amount of damage you can deal later on with bigger upgrades. It is not uncommon to end both of your opponent’s characters with a single All In in round 3.
6. MULLIGANS:For your starting hand you’re looking for a damage dealing upgrade (DH-17 is the best choice, of course), at least one piece of removal (Overconfidence is great, because you minimize the chance of drawing it late when Talzin might be dead) and a Witch Magick or a Force Illusion to protect Talzin going into round 2. The fifth card could be a second upgrade to pitch (Rise Again) or a Tactical Mastery.

7. REMEMBERING YOUR OPPONENT'S HAND (PART 2):So, do you still remember the hand of your opponent? You were playing against Drive-by-Shooting and discarded a card from your opponent's hand. Now, you look in the Discard pile and see that it was an Easy Pickings that was discarded. Your opponent has a Rally Aid in play and 3 cards left in his hand. What are those 3 cards? (you'll find the answer right underneath the image). 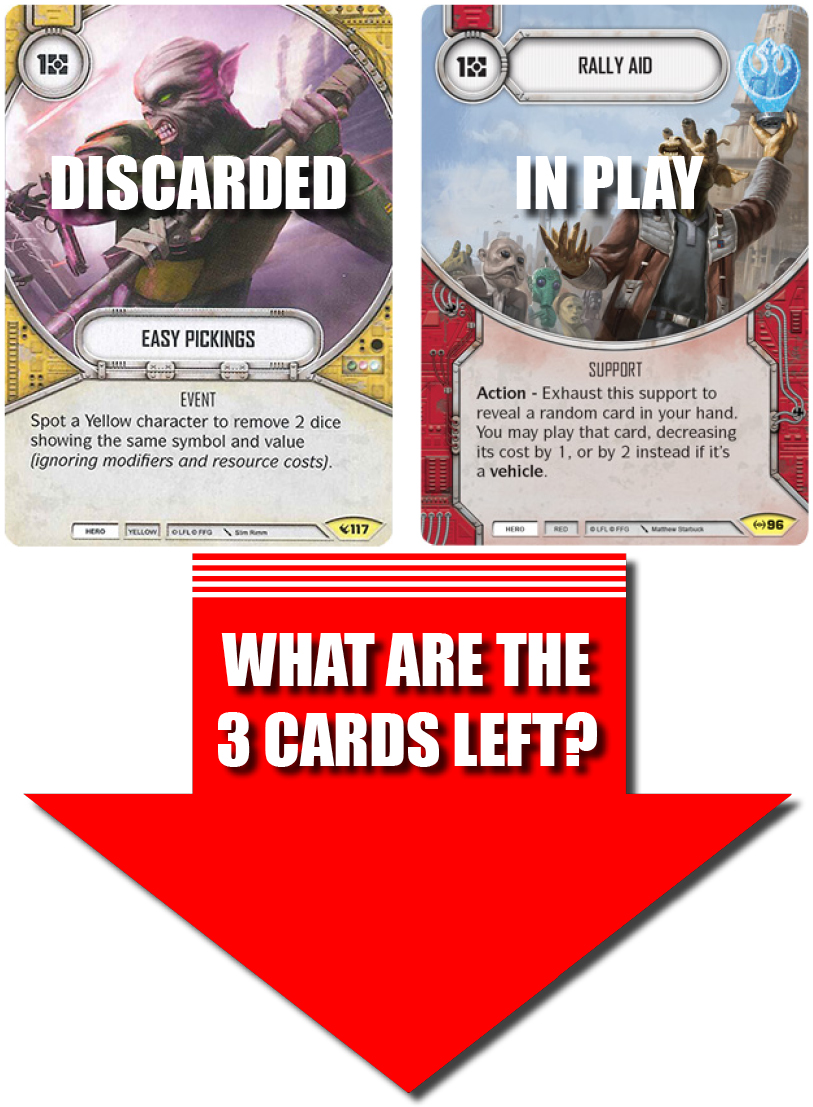 8. FINAL THOUGHTS:
As I said earlier, this deck can be extremely satisfying to play. It can win you games out of nowhere, even if you are extremely far behind in the damage race and without the need to god roll. Mother Talzin is there to save the day.

The same goes for the mill matchup as I have still to lose a single game to this archetype with Thrawn/Talzin and I LOVE crushing those pesky mill players ;) As long as you know what’s in your opponent’s deck, you stand a decent chance against anything!

The toughest matchup I have encountered so far is Mother Talzin/Aurra Sing, even though their health pool is very low (usually that should make your life easier). But tricks like a fast handed Aurra or Quickdraw into an ambush weapon at the start of round 2 to finish Mother Talzin are hard to counter. In this match-up do try to activate your Talzin after your opponent activates his! (I guess you know why!)