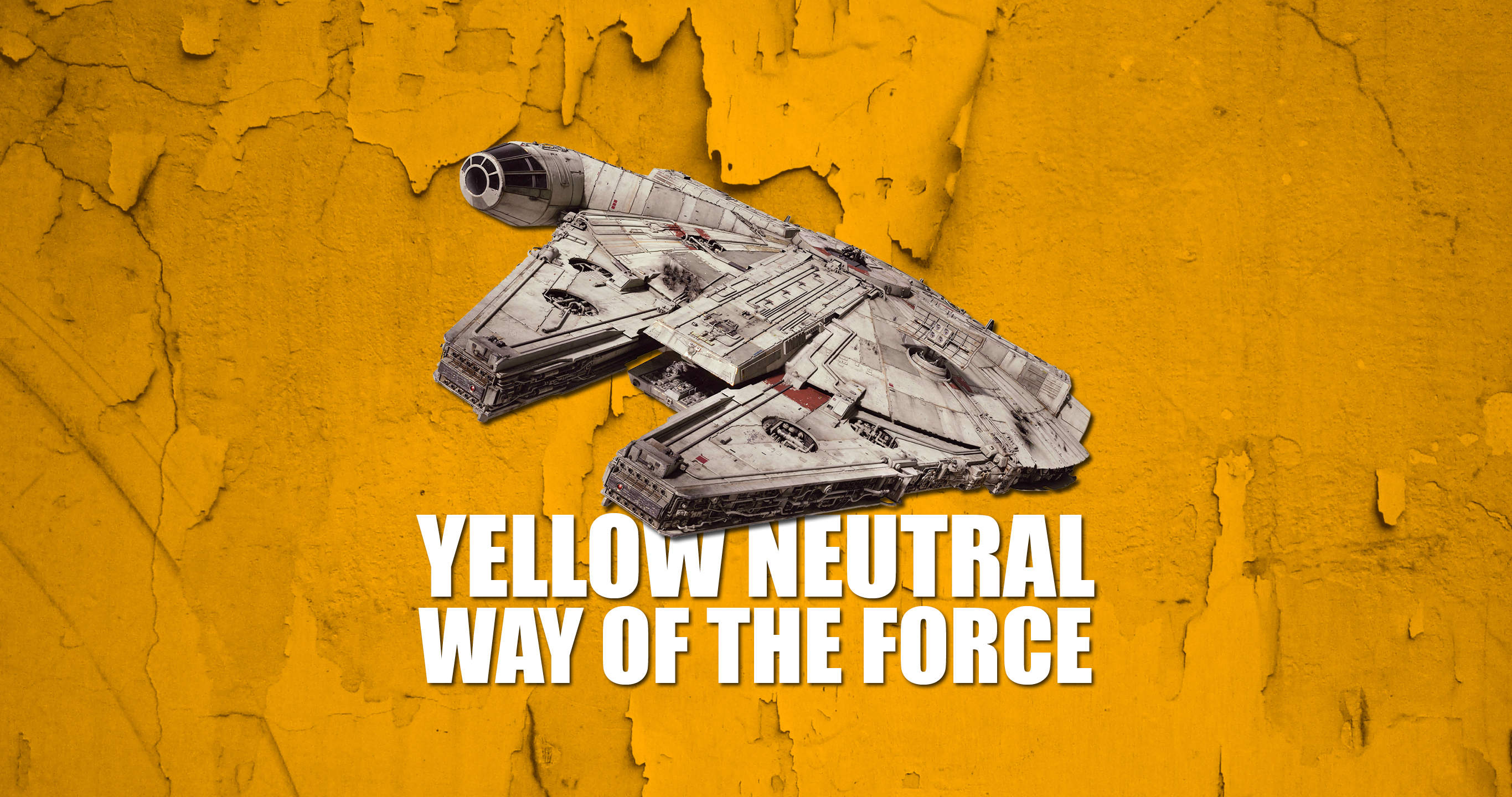 There are links to all the other parts of the set review at the end of this article!
1. YELLOW NEUTRAL CARDS:A thematic focus, which started a couple of sets ago, but is becoming very clear now, is being exploited in Way of the Force for yellow neutral. It's the focus on resources. This tendency goes all the way from the plot to the events and supports. This is an interesting space to be in, yet in this set feels undeveloped and it will be interesting to see how deeply it can be exploited in the future.

Then there's the Mandalorians ... where are we going with this? Is it going to be one-offs or are we going to see more weaponry similar to the ones in this set? No blanks and diversified die sides.
2. YELLOW NEUTRAL EVENTS:

FRIEND OR FOE (1/5)
This seems like an incredibly gimmicky card. The two best uses for it would probably be on an opponent's character die that is maxed out on damage, in which case you are not losing anything if it re-rolls back into damage or using it on your own character dice. Maybe adding Torment to offset the damage you'll take if you re-roll into damage by gaining a resource in the process. I mean, I grasping at straws here. Can't seem to find a place to fit it.

IN THE CROSSHAIR (4/5)
If you can manage your resources well enough, which with access to cards like Well-Connected and Truce shouldn't be that hard, In the Crosshairs can be absolutely devastating! It has the potential to wipe your opponent's entire dice pool, and more importantly is the first of its kind for yellow. It is absolutely massive! Ambush on top of that is just cruel. I think players, generally, should be much better at resource management, and probably will be, which means that more expensive cards like this one will become better. Normally 3 resources would be restrictive, but for yellow the matter is a bit different.

PODRACER BETTING (2/5)
There are currently 3 podracers, and although the card is playable on any vehicle, it's with the podracer die it shines. On top of that, all podracers share the same die outline: 1/1/1/1/2/-, which means that 66% of the time you'll hit 1 and gain 3 resources. If only there were more than 2 playable podracers in a deck this could form the basis of an interesting support deck. Unfortunately, netting 1 resource on a regular vehicle die, which is much more of a gamble, is not really worth it. Sure, you get the re-roll, but that's not really what you are after, which then means that there are better and easier ways to secure your resources.

REPROGRAM (3/5)
Doctor Aphra is loving this card and the rating would be (4/5) with her. A Reprogram would mean that she could potentially play a 0-0-0 and a BT-1 round 1, then activate BT-1, trigger 2 Indirect damage (BT-1 and 0-0-0) and draw a card! CRAZY stuff ... that's of course the optimal combo, but it's essentially a Truce or a Well-Connected used on a Droid where your opponent does not get any benefits - AT ALL!

RISKY MOVE (3/5)
This card is going to be great in mill decks. After the first couple of turns your opponent might not be so eager to play cards, or chances are you've already milled him (that's the dream), which just boosts the effectiveness of Risky Move. If you are not worried about the spot requirement, i.e. playing two or more yellow characters, then removing one die is always a safe bet for mitigation.

START YOUR ENGINES (2/5)
If you are playing a podracer based deck Star Your Engines is going to be fantastic and the rating of the card should definitely improve. Problem is that I don't really see any potential for a podracer deck - yet. We will revisit this card when that time comes, because tutor cards will always be amazing as long as you can use what you are looking for!
3. YELLOW NEUTRAL PLOT: 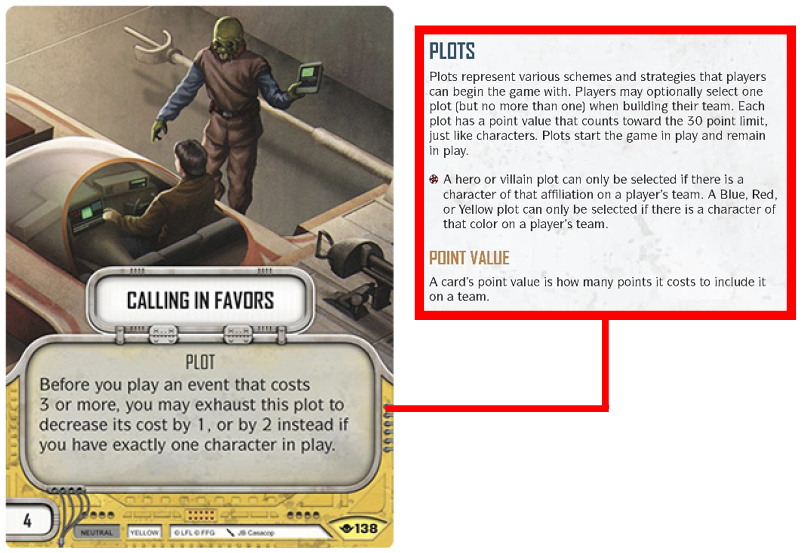 CALLING IN FAVORS (4/5)
This card was always going to be difficult to rate. There are so many unanswered questions regarding it.

The benefits are obvious! Being able to play the most powerful events for potentially 2 resources cheaper is bonkers! It gives you access to so many cards that are usually marginal at best, unplayable at worst, while the price reduction using Calling in Favors can be a massive difference. Cards like Reversal, Anarchy and Delve, just to mention a few. On top of that making plays with fan favorites such as Hyperspace Jump, Never Tell Me the Odds, eazy-peazy!

Question is whether or not your character team will suffer too much from just being comprised of 26 points, and Calling in Favors is here caught up in the mix together with Built to Last.

My initial thought is that there are great character teams out there that will benefit tremendously from the plot, which is positively reflected in the rating.
4. YELLOW NEUTRAL SUPPORT/UPGRADES:

INTRODUCTION:
All of the 3 neutral yellow supports in Way of the Force are centered around resource management and it is an interesting avenue the design of yellow is clearly taking. I'm curious for future sets to see how deep into this design space the designers are willing to go! Since resources are some of the best "commodities" in the game there is obviously a limitation to how easily one should be able to access them.

PRIZED GOODS (2/5)
Prized Goods at a glance feels good, but the prize is so steep. 2 actions, 2 exhausted characters to net 2 resources is a lot. Doesn't feel worth it!

STREETWISE (4/5)
This is functionally It Binds All Things for yellow events, and it can facilitate some powerful rounds in particular if coupled with supports like Maz' Vault, which will make you flush with resources, allow you to play upgrades or supports and still be able to mitigate. And as we know yellow does have access to some of the finest mitigation around.

XS STOCK LIGHT FREIGHTER (3/5)
The XS Stock Light Freighter is definitely better than Prized Goods and allows you to net resources from round 3. Whether or not that's too slow depends entirely on your deck, but if you play 3 or 4 wide I could see this being used. It could be an interesting support to play together with Cunning, which would essentially allow you to put 2 resources AND take 2 resources from it every round. Bit of a clunky setup, but we are living the dream here. 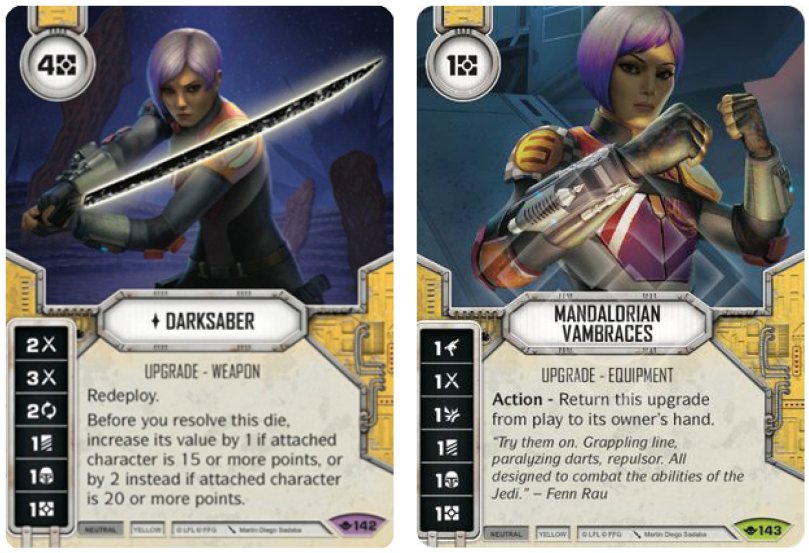 DARKSABER (4/5)
The Darksaber is just CRAZY! We are obviously not going to see the this weapon in every single deck, but it's really insane. If you get it in play your opponent it essentially forced to find a response to it every round. If you are playing it with a 20point character the die is absolutely monstrous. Every single die side can be game changing. There are several characters out there that would look almost invincible carrying a sword like this.

MANDALORIAN VAMBRACES (3/5)
It's becoming a thing with upgrades, supports or characters with no Blank die sides. The Mandalorian Vambraces might not have the most impressive die, but 5 out 6 die sides are good and played on the Mandalorian Super Commando it can actually be quite good. Problem is that although the die sides are good, the upgrade as a whole feels pretty weak and there are still 1 resource cost upgrades that are better.

RESPECTED BUSINESSMAN (1/5)
This upgrade is going to net resources after 3 rounds, which is too little. I wouldn't play this over a Chance Cube, unless of course the fact that its a Title is going to matter at some point. It doesn't right now.