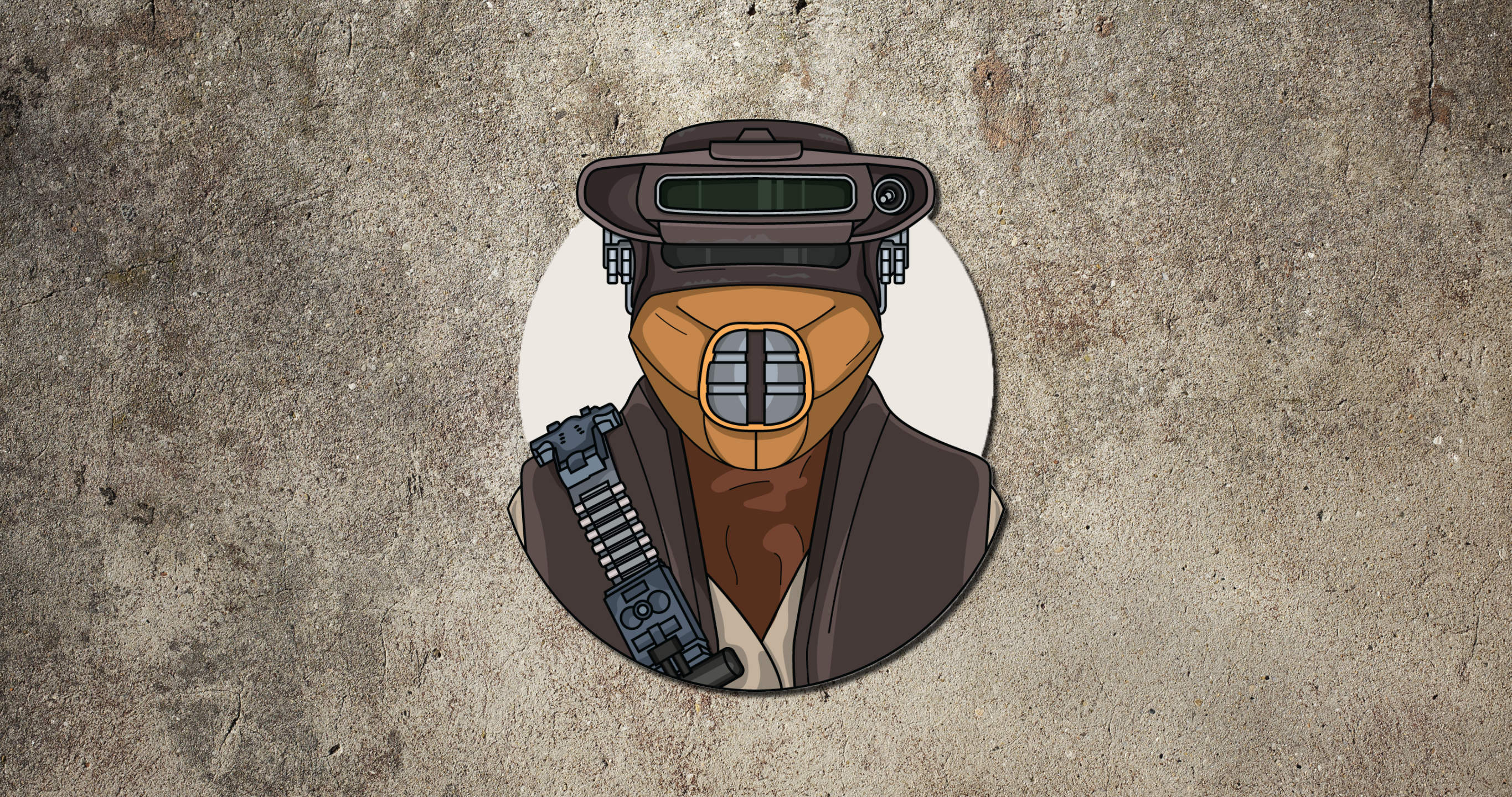 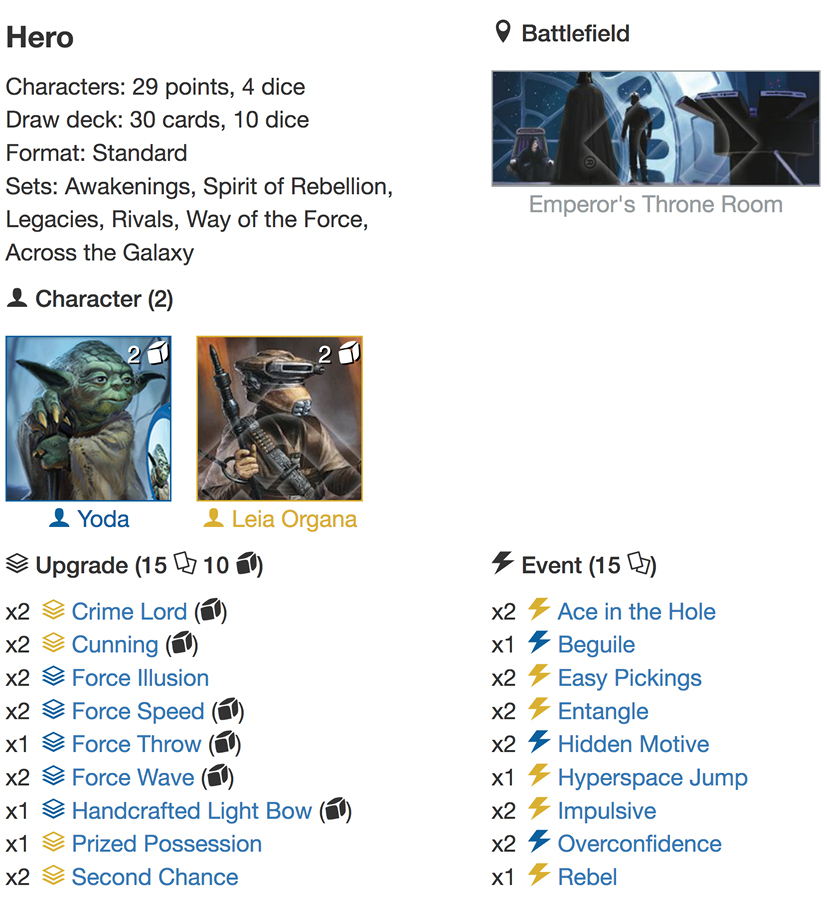 1. GENERAL COMMENTS:
I didn't even know the bounty hunter that Leia had assumed the identity of in Return of the Jedi when entering Jabba's Palace had a name, but hey ... I'm also one of the least knowledgeable people in Star Wars trivia, and I guess you learn every day it would seem.

Being able to include Villain cards in a hero deck is pretty damn enticing, and although it didn't turn out that well for Finn (Awakenings) it might just look at bit better for Leia, who appears to have a lot of things going for her. 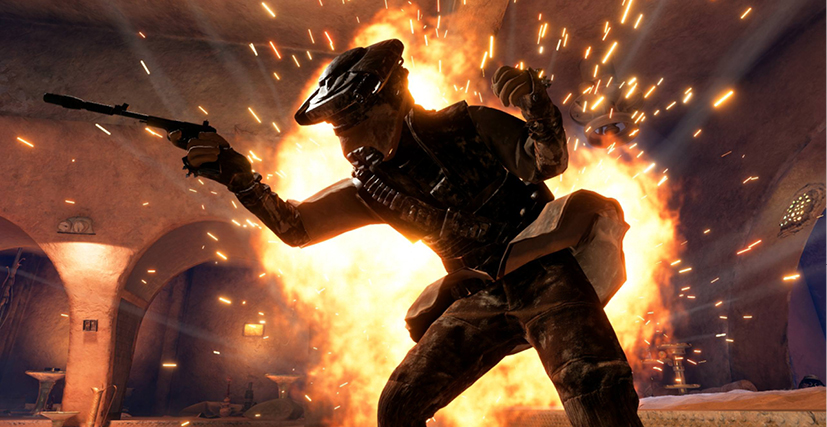 This deck plays out similar to Yoda/Hondo, which also looks quite improved with the arrival of Across the Galaxy, but is at the end of the day a combo deck attempting to capitalise on Ace in the Hole and Crime Lord. It does have some inherent damage in it, but it's not impressive and trying to fight your way through a 3wide deck solely relying on damage is always going to be an uphill struggle!

It's not a subtle deck, while also being gimmicky and by no means a competitive deck, and once your opponent realises your game plan, and believe me they will eventually, you'll need to play smart and protect both your hand, resources and dice. Don't set up the trap too early and be sure to be able to through with it once you roll that Crime Lord die into the pool!

The are several strong iterations of this deck out there that doesn't utilise Crime Lord, but plays out much more like the old Yoda/Hondo deck instead. That iteration normally employs upgrades with strong Specials, i.e. Obi's Lightsaber, Handcrafted Lightbow, Cunning, Treasured Lightsaber and the wonderfully thematic Thermal Detonator as well as Ace in the Hole.
2. CHARACTERS: 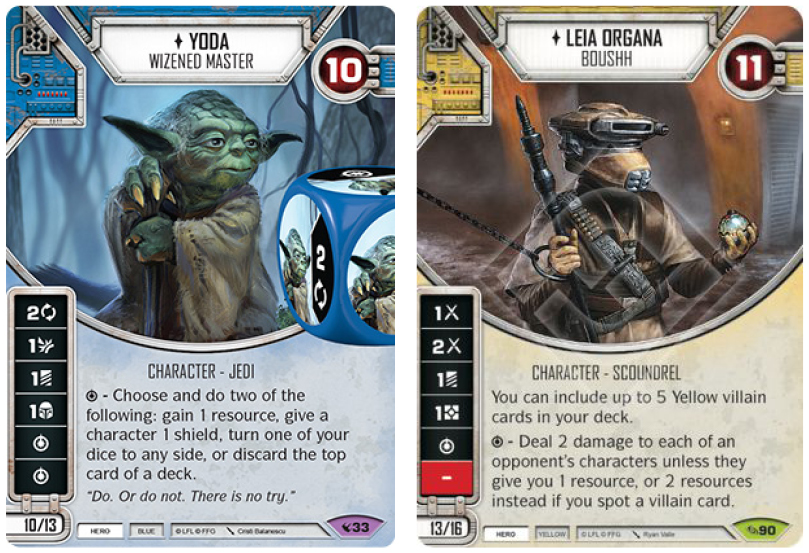 YODA aka Mr. Consistency or Master Reliable. He's everything you need from a character. We've already discussed him thoroughly in the YOUR Destiny Podcast as well as in several of our articles. His die sides are a killer and his Specials can do everything you need ... make resources, flip dice, gain shields and set in motion an avalanche of Special chaining. That was the big thing in the Legacies meta, while it sort of fell out of favor in a Snoke and Doctor Aphra dominated Way of the Force meta. But Yoda is never done and is just waiting to come back as a ghost to haunt you again!

LEIA ORGANA - BOUSHH is our third version of her, and all three versions are COMPLETELY different from one another. Kudos to the design team for going all in on diversity of her character. The aspect she has as the bounty hunter Boushh (honestly I had no idea that was the name prior to this set release) is pretty intense. The Melee damage sides are underwhelming considering her 13/16e cost, but the Special is pretty outrageous. Imitating the effect of the V-1 Thermal Detonator it can decimate character teams if triggered when they have no resources or too little to pay you off. The main problem is that many of the top decks today are flush with resources, which weakens her Special, but doesn't make it obsolete - by no means!

Losing Leia is not the end of the world, but it does make your job somewhat more difficult - especially if things turn into a slugfest ... that's a party where you'll most likely be going home alone.

BONUS: This character team is still playable should a new Holocron arrive balancing out Yoda.
3. CRIME LORD:The combo is pretty simple and is well-known from the good ol' Jabba/Unkar days, Ace in the Hole into Crime Lord. The difference is that Yoda can easily make this happen. If you draw the combo, just set it up. It should be possible as early as round 2, but finding it might not be as easy as it looks.

But while drawing into those 2 specific cards might not be easy, luckily, you have several cards that will enable the combo.
IF you manage to get the Crime Lord in play things get easier, but then you are also playing with open cards. You have lost any remaining element of surprise, if there ever were one, and won't be able to sit back with the combo to play it at an opportune moment. You'll have to slug it out through mitigation and whatnot.

But you still pack some tricks including FORCE SPEEDS and IMPULSIVE that will help you cheat out the die and resolve it before you can be interrupted. Beware of new supports such as Stifle and Improvised Defense that can really ruin your day!

REBEL is added to help you retrieve an Ace in the Hole previously used or discarded from your hand or deck (i.e. Force Illusion). I'm not sure you want two copies of it in your deck, but I could definitely be wrong about that one. I'd probably cut a mitigation card in place of the second Rebel - if needed.
4. OTHER UPGRADES: 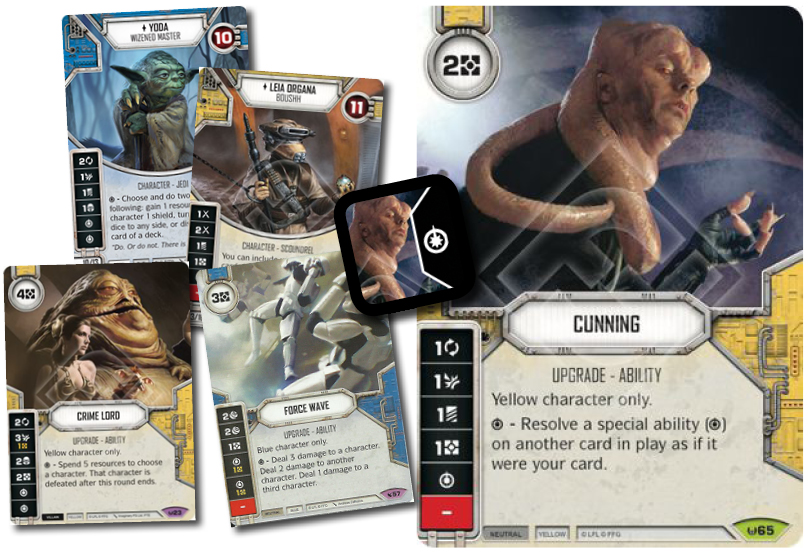 CUNNING is such an incredibly powerful upgrade! Resolving it as ANY other Special on ANY other card in play is BONKERS!! And it's obviously a massively important upgrade in the deck. It's one of the best enablers and you'll want to see it in your starting hand, either using it early to deal damage imitating a Leia Special or harvest resources as a Yoda Special. 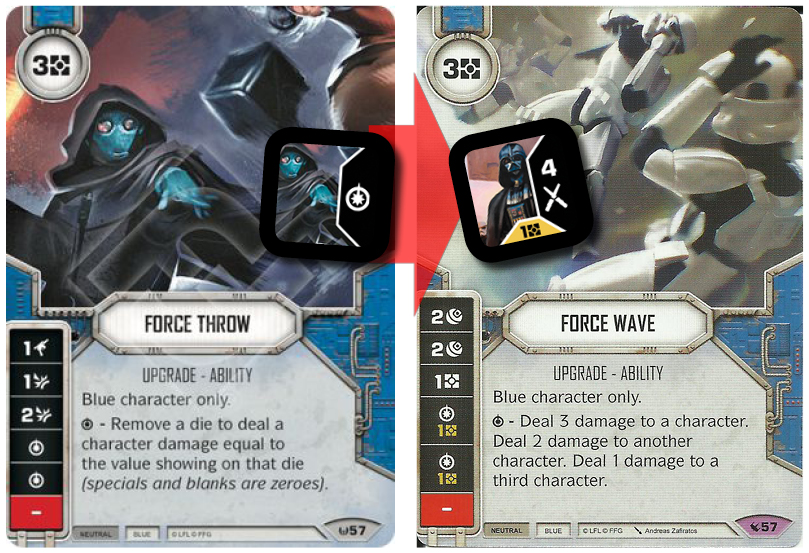 Your Force Abilities are always going to be meta dependent. If the tendency of BIG dice like Planetary Bombardment, Vader's Fist, Darth Vader (even if his die is going straight back into the pool), etc. is going to take hold of the meta as expected then FORCE THROW is going to be great, and FORCE WAVE is excellent against 3wide decks. 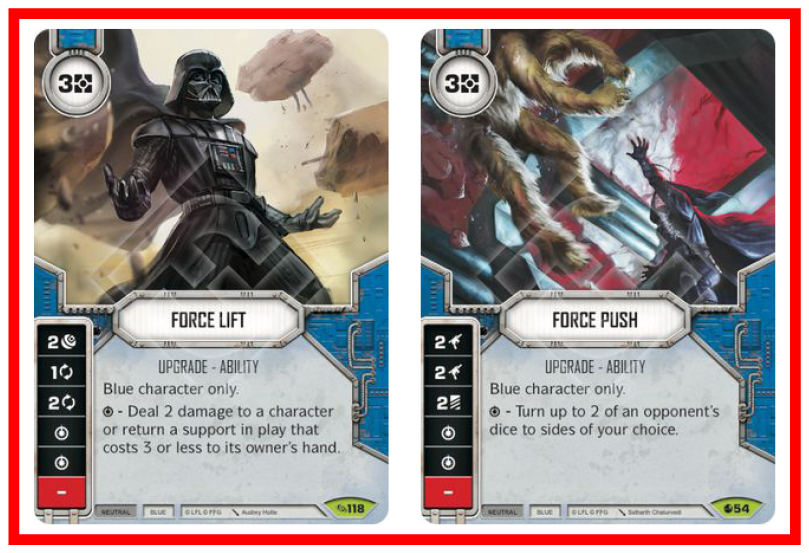 Other metas might mandate the use of Force Lift or Force Push, both of which are excellent Force Abilities as well. The downside is that all of them can only be played on Yoda, and with him being such a strong enabler could easily put a large target mark on his green forehead! 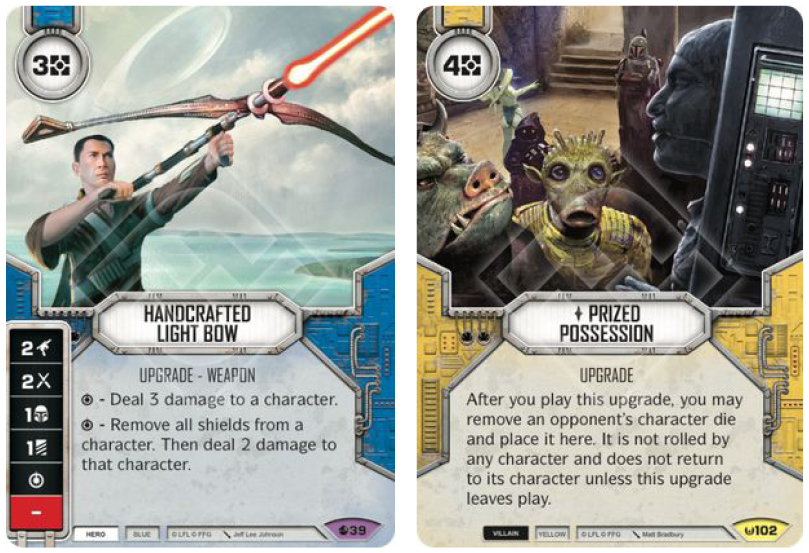 HANDCRAFTED LIGHT BOW has three damage sides, can be Special chained and get work to help out in the damage race if you are forced to go there aginst 3wide character teams. It can be replaced by another upgrade and I'd probably consider Ezra Bridger's Lightsaber a suitable alternative. It has Redeploy and is affordable as an early upgrade at 2 resources.

PRIZED POSSESSION
Your 5th villain card in the deck (+ 2 Ace in the Hole and 2 Crime Lord). It's primarily a continuous mitigation card, permanently removing one of your opponent's most threatening character dice. It can be used to overwrite with a Crime Lord or a Second Chance if needed! Also, remember that Prized Possession doesn't leave play when the character who's die is on the card is defeated. It can still be overwritten later in the game! Prized Possession also enables the second part of Leia's Special (your opponent has to pay you 2 resources to negate the damage). 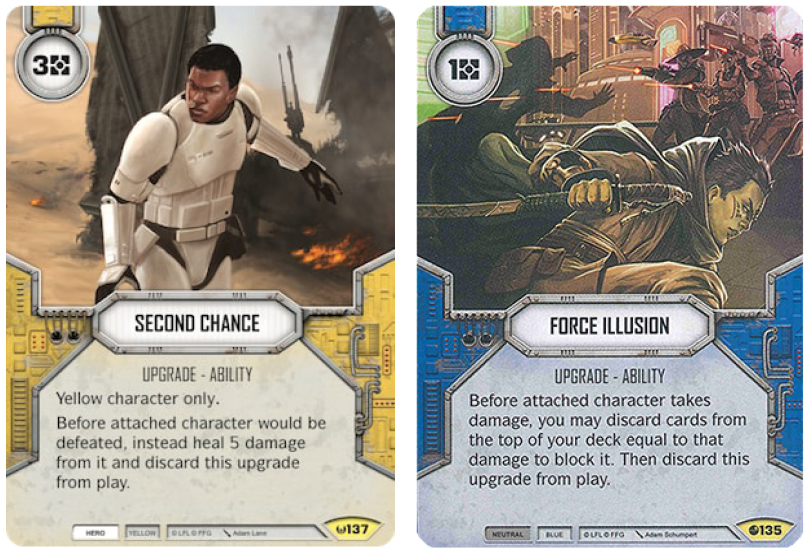 You are running a pretty soft character team, 21hp collectively, and need all the help you can get to keep you in the game. Both SECOND CHANCE and FORCE ILLUSIONS are excellent! Combo decks are difficult to play because the gravitate around such a small focal point, but Crime Lording characters is FUN!
5. REMOVAL:You run a total of 9 mitigation cards (as well as 1 Rebel, 2 Second Chance and 2 Force Illusion), so should be pretty set even against decks that can remove one mitigation card from your hand, i.e. Thrawn or Friends in Low Places, etc. You do have to be smart about it though because mitigating your opponent's dice is not going to win you the game. Getting the Crime Lord out is, which as a minimum is going to cost you 5 resources. You can't afford to spend all your resources on mitigation and although Yoda and (maybe) Leia's Special are good for some resources, you'll still need to manage them carefully.

Both your Yellow mitigation cards, EASY PICKINGS and ENTANGLE, are spot cards, but I haven't found that to be a problem so far. BEGUILE has excellent value and although Mind Trick might be the superior card in some match-ups, Beguile can be extremely disruptive against decks relying on few powerful dice, while not being too shabby against vehicle decks either. Affecting 3 dice for 2 resources is not bad at all. 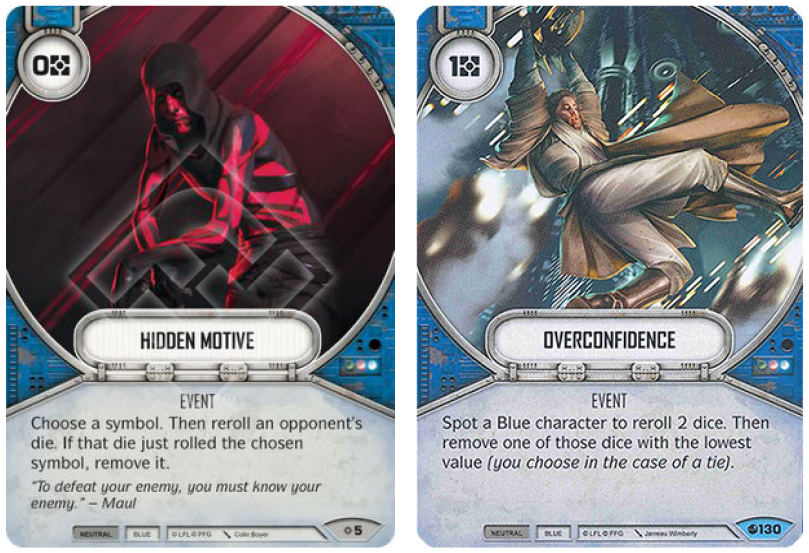 HIDDEN MOTIVE is your only free mitigation and I've been on and off with that one, but do think it has good value against a number of decks in the format.

Your dice suck at the OVERCONFIDENCE battle so don't go there - just use it to affect two of your opponent's dice! It's your only Spot Blue mitigation card.
6. HYPERSPACE JUMP:You are already a bit strapped for resources so HYPERSPACE JUMP can seem extravagant in a deck trying to sit back with a combo piece. It's included to help out against the massed onslaught of support based decks as well as secure your Battlefield. EMPEROR'S THRONE ROOM can be really important to your plans, and your character dice S U C K at the roll-off for initiative!

Against decks that takes time to set up, focusing into resources, playing upgrades/supports, etc. an early Hyperspace Jump can be what you need to deny them a strong boardstate while you have the ability to claim out with Crime Lord or any other Special.

If you want to save a bit on resources, New Orders could be an alternative and it also allows you to use the Claim ability immediately!
7. MULLIGAN OPTIONS:I like to have a stacked hand of mitigation early on to deny your opponent too much influence in the early game. A Force Speed in your starting hand means you can start applying pressure early bypassing mitigation and getting the most out of your dice!

I like to have Prized Possession against strong characters because it allows you to curb their impact early. It is also mitigation on the round you play it (IF the die you remove is in the pool). If you decide to play Prized Possession you are almost forced to use it on Leia to be able to overwrite it with Crime Lord or Second Chance later on. 4 resources is a big investment for this deck.
8. NON-CRIME LORD VERSION:At the Atlanta Regional 2018, held on December 1, FlaccidBaron of the Artificery brought this Yoda/Leia3 deck to the top spot of the event. It's a completely different deck and plays out entirely different. We'll be analysing this separately in another article. (Click the image to go straight to the Artificery's analysis on swdestinydb). 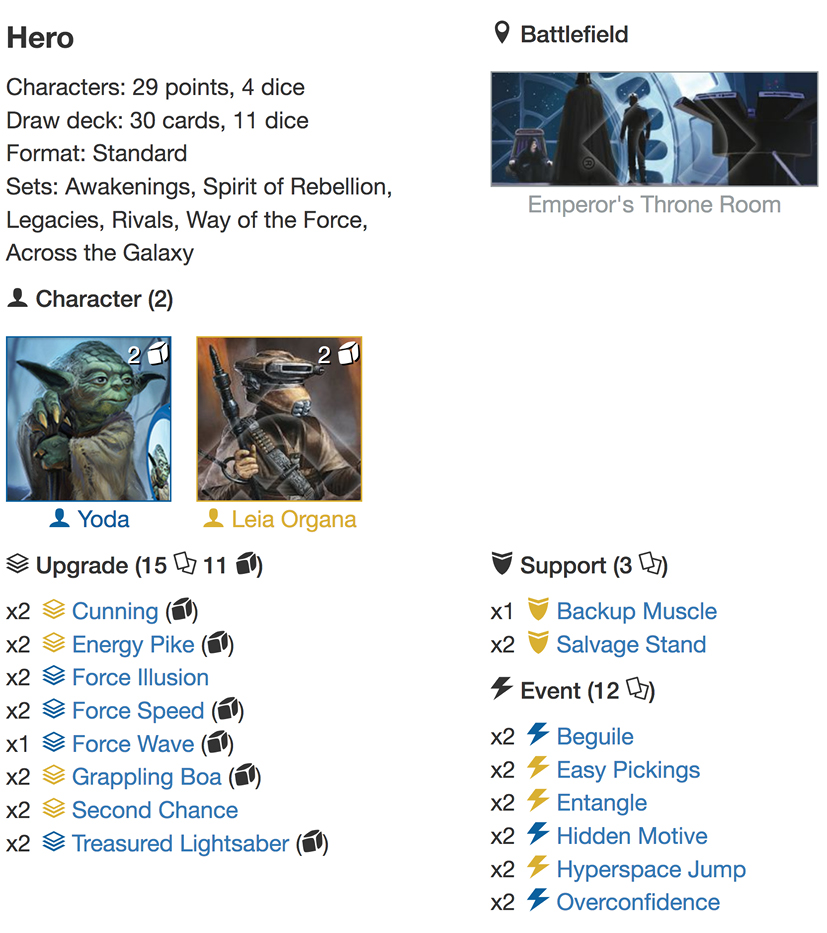