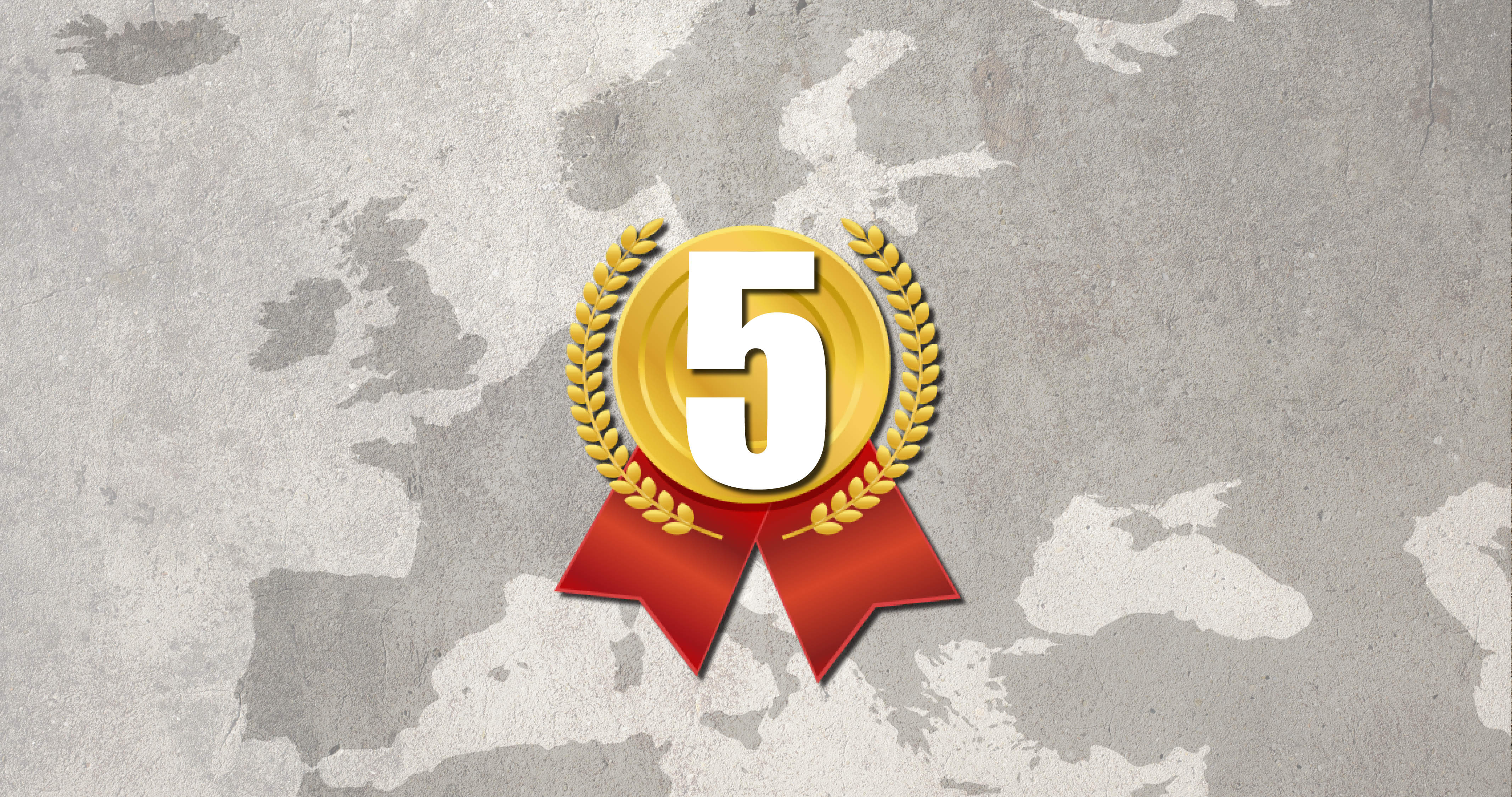 Read OUR PREVIOUS COLUMNS!
5 THINGS TO EXPECT FROM EUROS 2019!
Written by CLAUS STAAL

As I'm writing this column, I'm also mentally getting ready for Euros 2019 and wanted to share a few of things that has been going through my head these last weeks.

As some of you might know, I'll be at the event, but will not play as I'm taking on the role as Marshal of the event, and although I would have loved to dive into the deep end at the premier European event of the year, I also think the community role of marshaling the event is important and one I gladly take on. Anyways ... Not playing at the event has then given me the chance of taking a step back, help Mads Utzon prepping for the event, and consider a few of the things I'm expecting from the event. Here's 5 of them.

1. DROIDS TO RUN RIOT:It can't really be a surprise that we should expect the Droids to dominate the meta. They are here, there and everywhere! Looking at the results from both Gen Con 2019 and the recent German Grand Championship everything seems to point towards Chopper Droids as the big bad droid deck to beat, which is interesting as I for a long time considered that version the weaker of the three popular versions, which then also includes Han Droids (aggro) and Satine Droids (support). 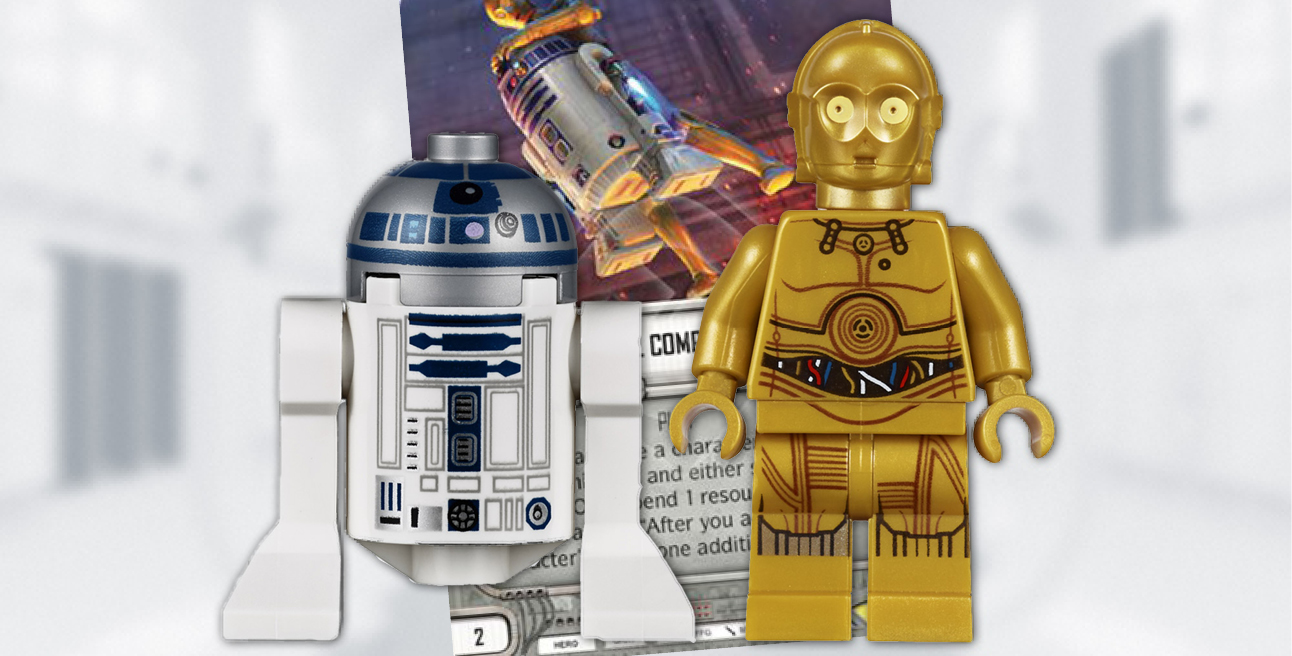 Alright, alright ... I know that the Magnuson brothers from The Destiny Council have praised the Chopper Droids (control version) quite a bit. And while I acknowledge that you have to listen when as accomplished Destiny players as them are speaking up, the last couple of weeks of training for Euros has convinced me that the pecking order of Droid decks has Satine Kryze as the apex predator with Chopper Droids vying for second place, which I believe they narrowly beat Han Droids to.

That statement might be surprising as we've seen two Chopper Droids decks in the top4 at Gen Con piloted by Andrew Rothermel and Jonathan Magnuson as well as Gerrit Backes recently taking home the German Grand Championship with the very same deck, card for card (if I remember correctly) as the version piloted by JMag. BUT...

(NOTE: The pie charts only cover the composition of Droid decks and as a percentage of the full population mentioned in the brackets): 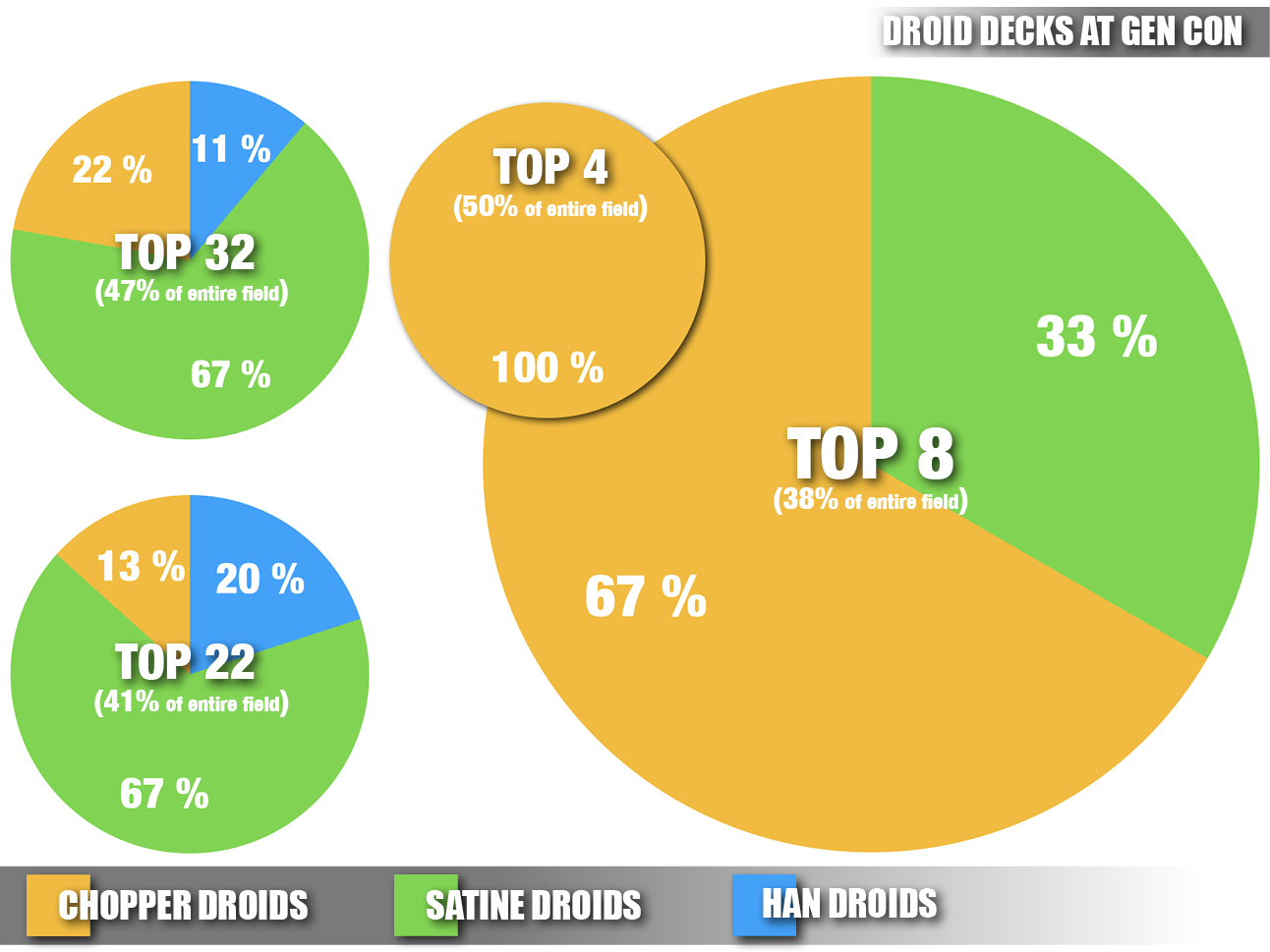 Add to this that there was not a single Satine Droids deck represented in the entire field at the German Grand Championship, while there where 3 each of Han Droids and Chopper Droids, which means that the numbers from that event cannot really be used in determination of a power level. Two Chopper Droid decks progressed to top4, while the final was decided between Ewoks and Chopper Droids with the latter taking the event home. You can see the deck below. 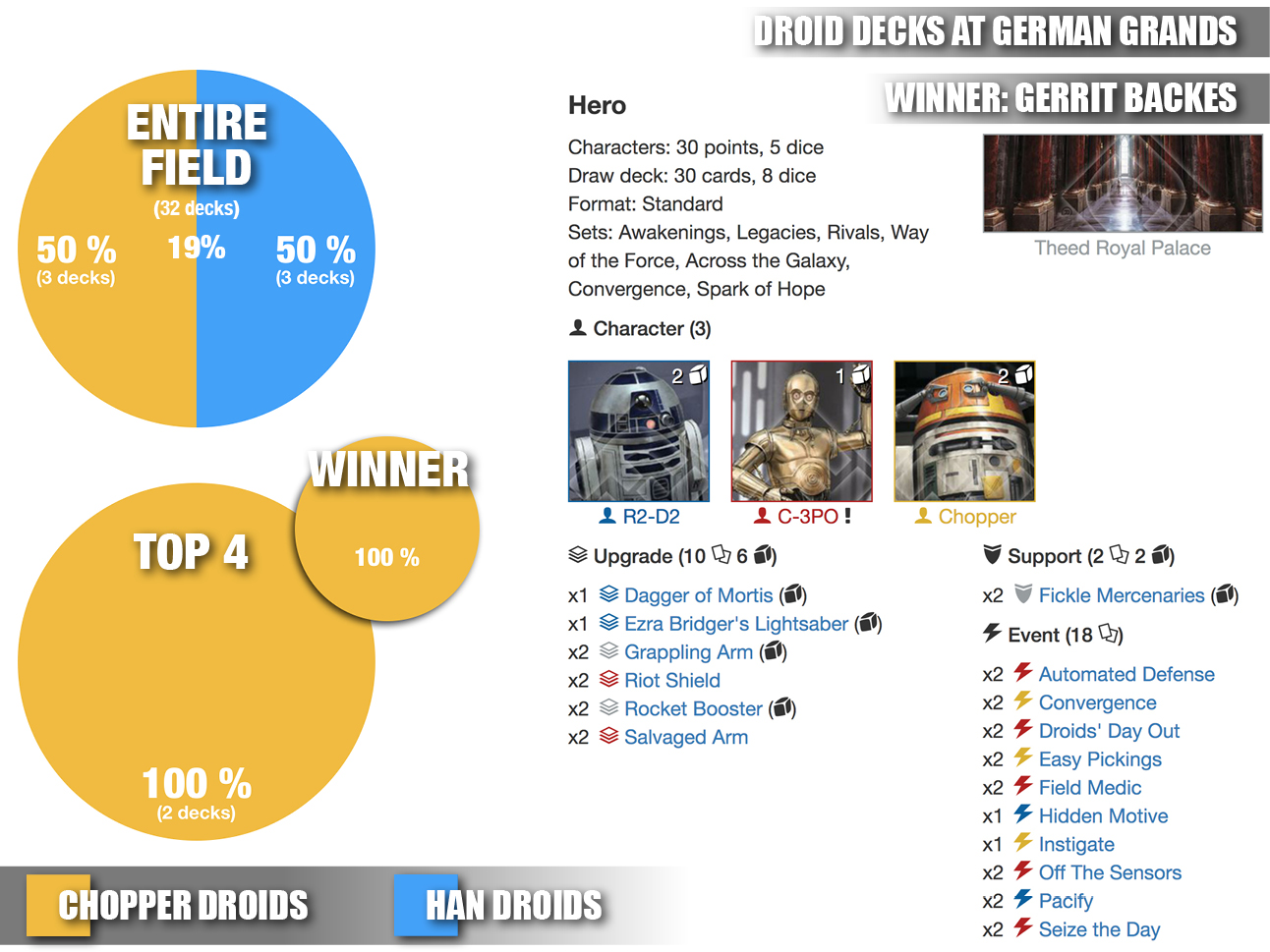 One can only speculate as to reasons why Satine Droids were totally absent in Germany and generally, if my prediction is correct, have performed well below its power level.

I'll definitely be surprised if Satine Droids are not showing up in force at Euros and unless a great disturbance in the force takes place, I'll also predict  Mads Utzon to bring that exact character pairing to Poland.
2. A SMALL, BUT SUPER COMPETITIVE EVENT:Gen Con 2019 had a dip in attendance, from 250+ players in 2018 to 146 players this year, while we are expecting to see the same kind of drop in numbers at the European Championship 2019, and for some this is a dark premonition of a bleak future for competitive Destiny. I'm not going to hide some disappointment in the predicted low attendance, but I'm also confident that several things not related to the popularity of the game or the dedication of those playing the game, maybe the opposite, have contributed to this drop. So, leaving the disappointment of the European Championship looking to be much smaller than last years record haul of 254 players, I'm also predicting that this year's European Championship is looking to be one of the most competitive events we've had in Europe ever. Na'h, let me rephrase that. It will be THE MOST COMPETITIVE DESTINY EVENT EVER IN EUROPE!

I have the joy and privilege of talking daily with some of Europe's best players and they really maintain a high level. The competition is going to be fierce with top players from around Europe making landfall in Kraków (Poland) to compete for the bragging rights in Europe and represent all of the Old World come October when we go toe-to-toe with the best the New World has to offer.

I for one know that I'll be relishing the opportunity to see the best in Europe clash ... If you are not going to be able to be there you can follow all the action live on the YOUR Destiny stream that will cover the entire event! 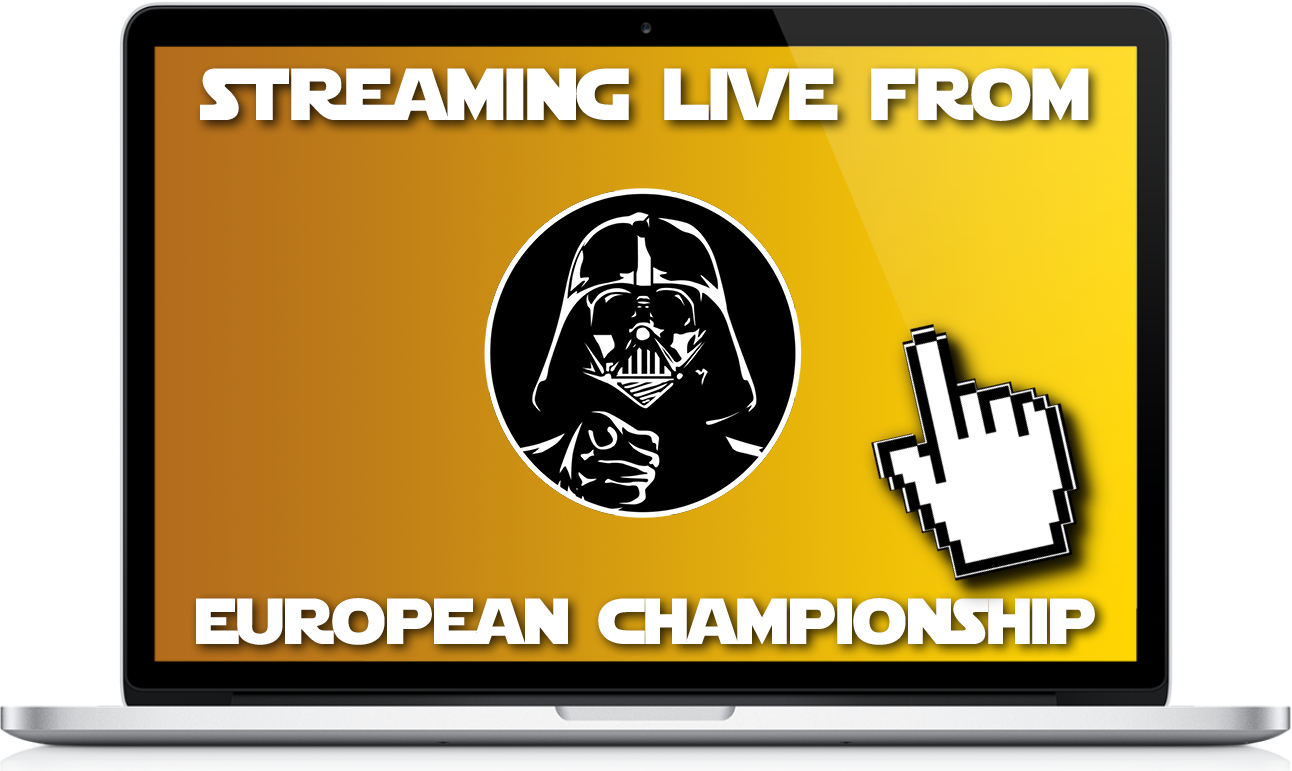 3. EWOKS TO CRASH AND ...Yes yes yes ... I've said it a million times before and I keep getting it wrong, but I'm confident(‘ish) that if I say it enough times it will become true: "Euros is when the Ewoks will crash and burn!" ... 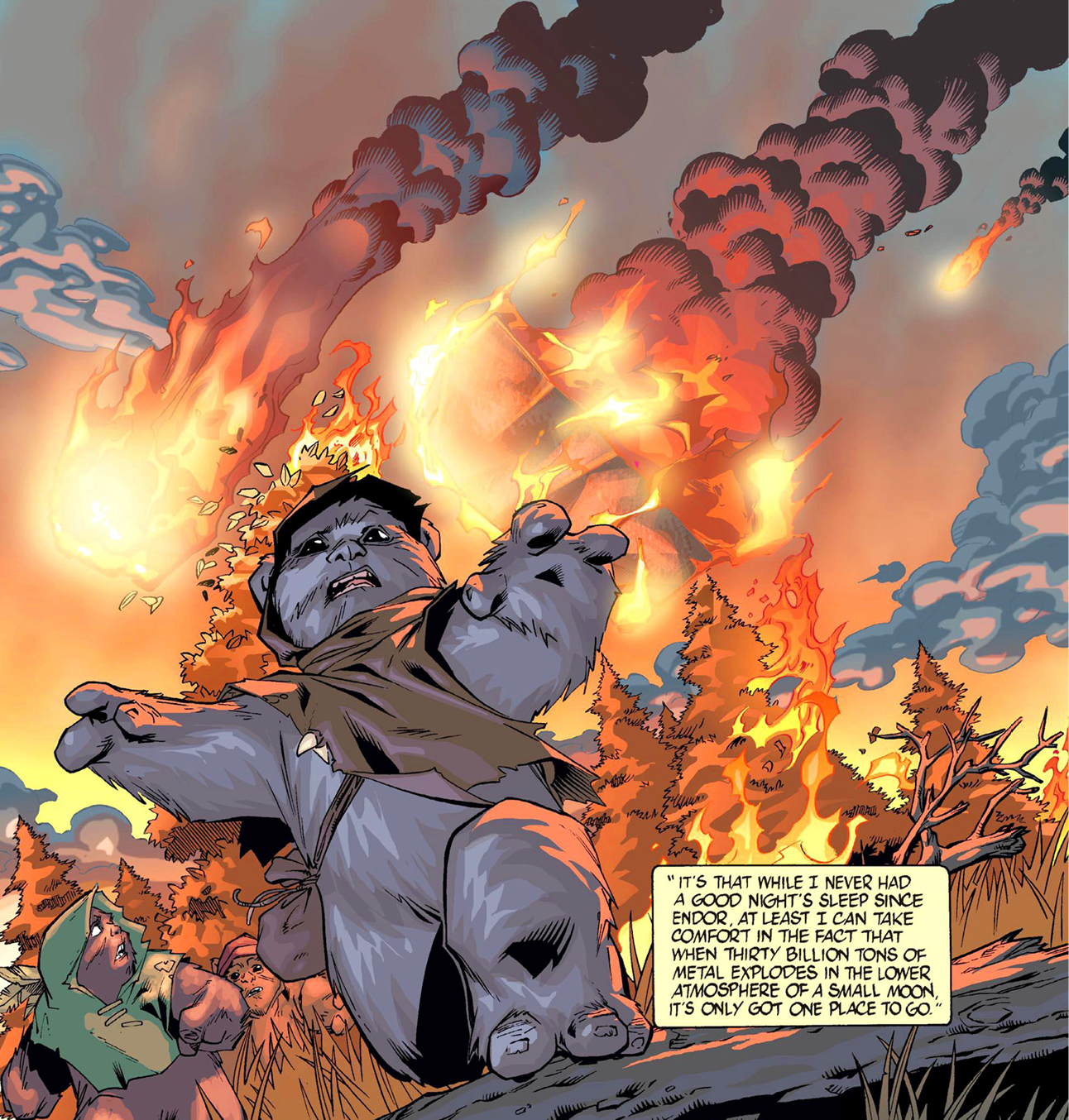 No no no ... it's not that I hate Ewoks (I do), but rather that it's infuriating that a deck with such obvious counters keep doing so well (they are not so obvious though). We did a feature on "5 Cards You Should Bring Against Swarms" a couple of weeks ago, and Mike Gemme the Ewok master extraordinaire did a similar thing on the Hyperloops website covering many of the same cards. Many of the cards have already been tech'ed into quite a few decks, the most obvious is probably Sudden Impact that effortlessly will fit quite a few decks, but it does look like the fuzzy swarm continues relentlessly.

Maybe the most important counter to the Ewoks is to get your test games in against them! You do not want to stare down a million fuzz balls and never having played a single game against them. Watching them on YouTube is not going to cut it! If you expect to do well at Euros against some of the best players in the game, some of whom will be crazy enough to bring Ewoks, you seriously need to get real and test against the inevitable swarms. You'll learn small tricks in every game, like when Mads claimed against me in one of our test games to avoid the 3 damage from Arena of Death just to get slapped by two Rigged Detonation for a gazillion damage! Yes. A gazillion.

I'm sure the Ewoks will be brewing on their own sneaky ploys, so do expect cards like Convergence to be tech'ed in to destroy whatever you throw at them.
4. MADS UTZON IS BACK! 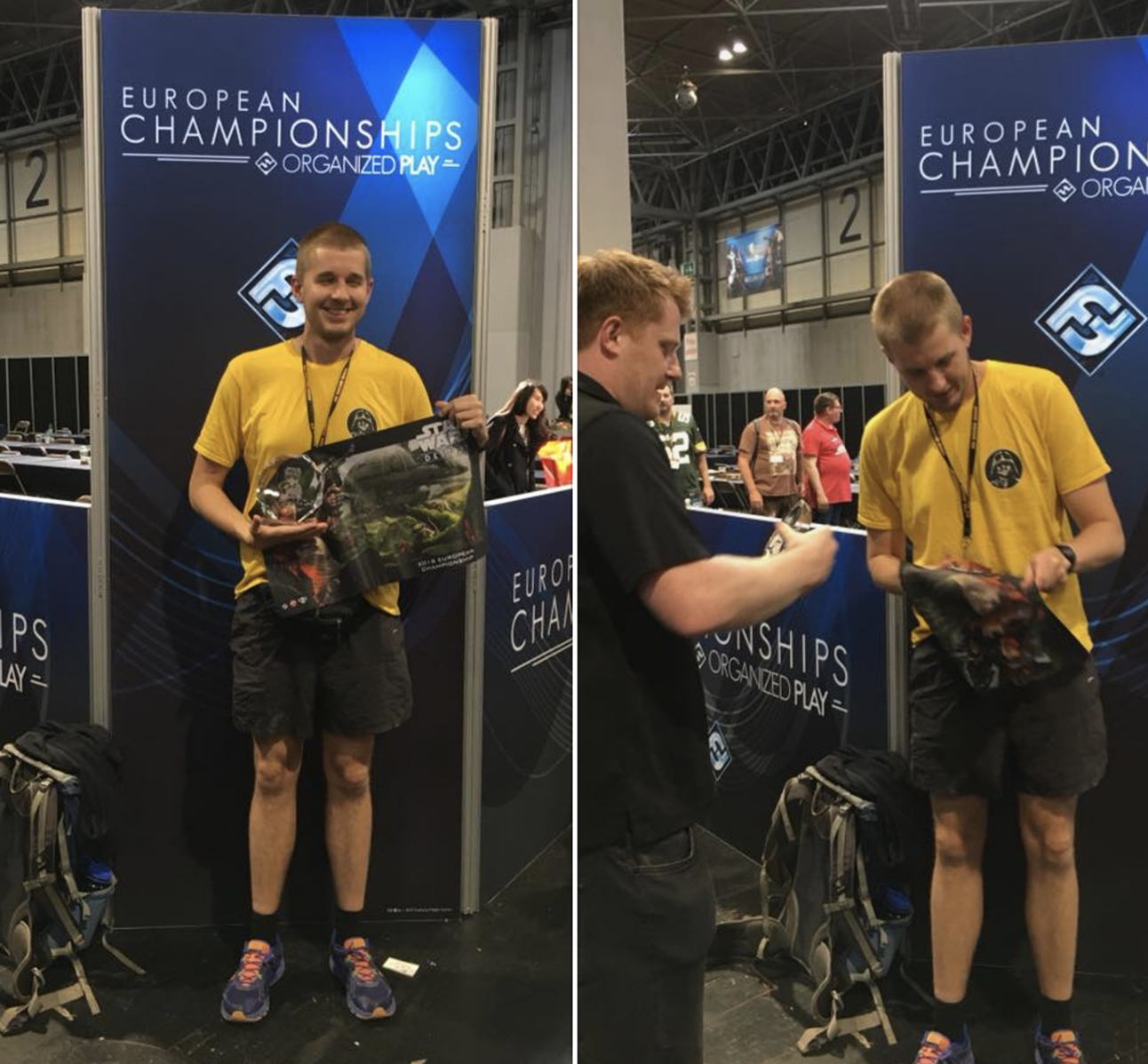 Reigning European Champion Mads Utzon has been in and out of the game for some time, well ... he's never really been out of the game as much as hibernating, but he's definitely back! And he's gunning for success in Poland! While he took the 2018 crown of Europe on the back of his runner-up spot at Worlds 2018 a month prior to Euros, this time around he's been missing in action for quite some time, but has put loads of hours into getting in shape. He's not entirely there yet, but come Friday 23rd of August and he'll be 100% ready. That guy just lives for these big events.

While predicting the outcome of such a competitive tournament is always going to be difficult, there's no doubt that Mads will be one of the odds-on favourites to take home the coveted trophy (painted wooden die) and he's definitely putting in the work to make a serious assault on back-to-back European titles.
5. COMMUNITY EVENT:The European Destiny scene feels very strong, not just in terms of the competitive level, but there's also an incredibly strong sense of community at the core of it and that's definitely going to be a red line running through the event. We expect people to gather for four days of intense Destiny, but also socializing across borders, and the scheduled meet-up on Saturday should be a giant celebration of the spirit that keeps us in the game. I'm looking so much forward to this gathering and would like to thank Wojtek Wisniewski for setting it up! 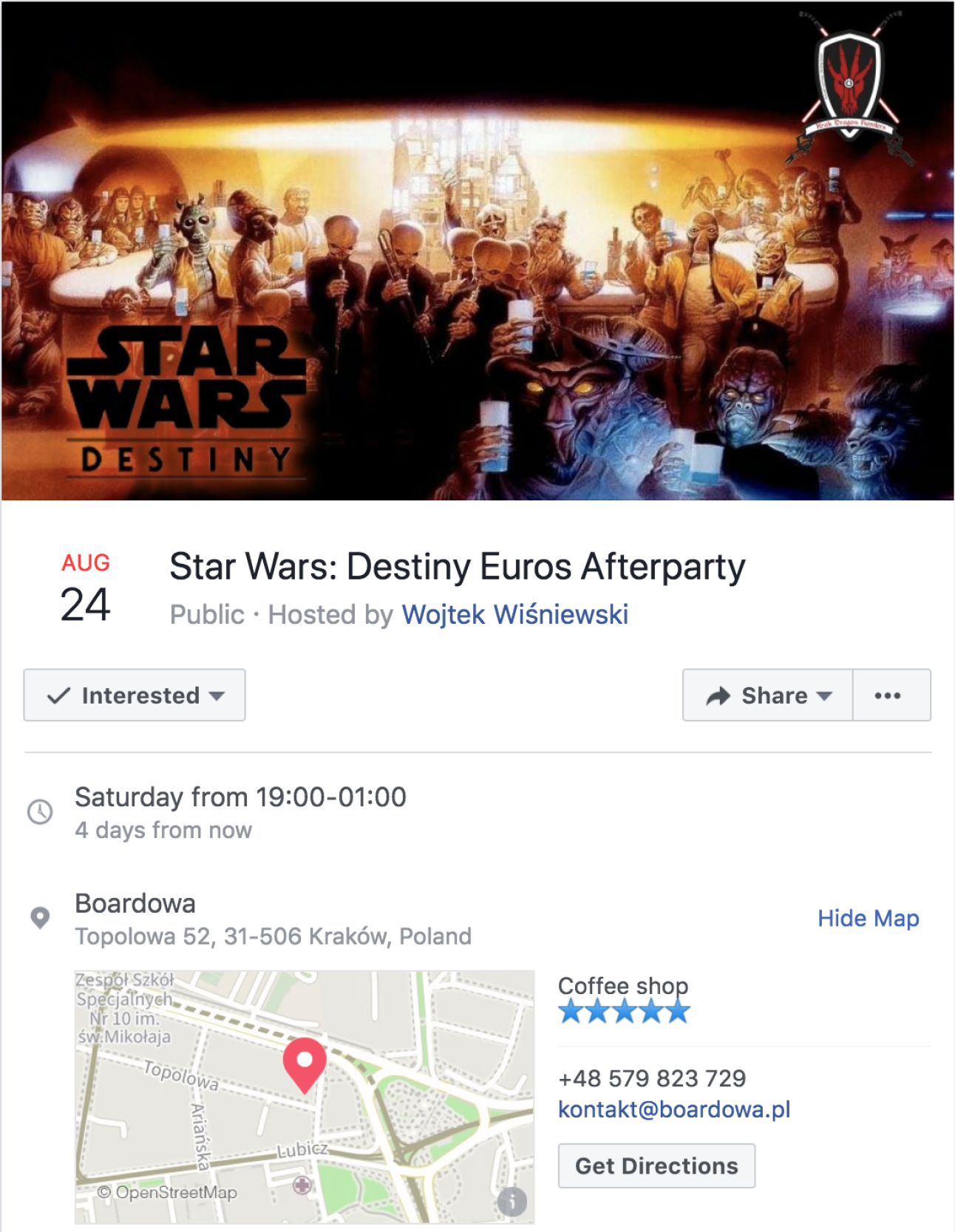 We are honestly very proud to be a part of the European Destiny scene that has experienced quite some growth over the last year, and also draws people from across Europe, connecting them and fostering a great spirit of belonging, which, if I may be so bold (and a bit political at the end of my rant), is sorely needed in these days where we are threatened from within by forces that are trying to not only pull us apart, but destroy the pillars that has made Europe prosper, economically and philosophically. Wouldn't it be beautiful if it was a bunch of nerds that ended up saving our dignity and future.

PATREON SUPPORT:
As a Patron you support the YOUR Destiny website, podcast and YouTube Channel, and you help us to continue providing content for Star Wars Destiny. We are a dedicated Destiny website and release articles almost daily. As Patron you can enter our Patron only Discord Channel as well as getting access to all our "Chat 'N' Play" videos, while Advanced and Expert tier patrons also get access to exclusive training videos and test videos. Thank you for your consideration.