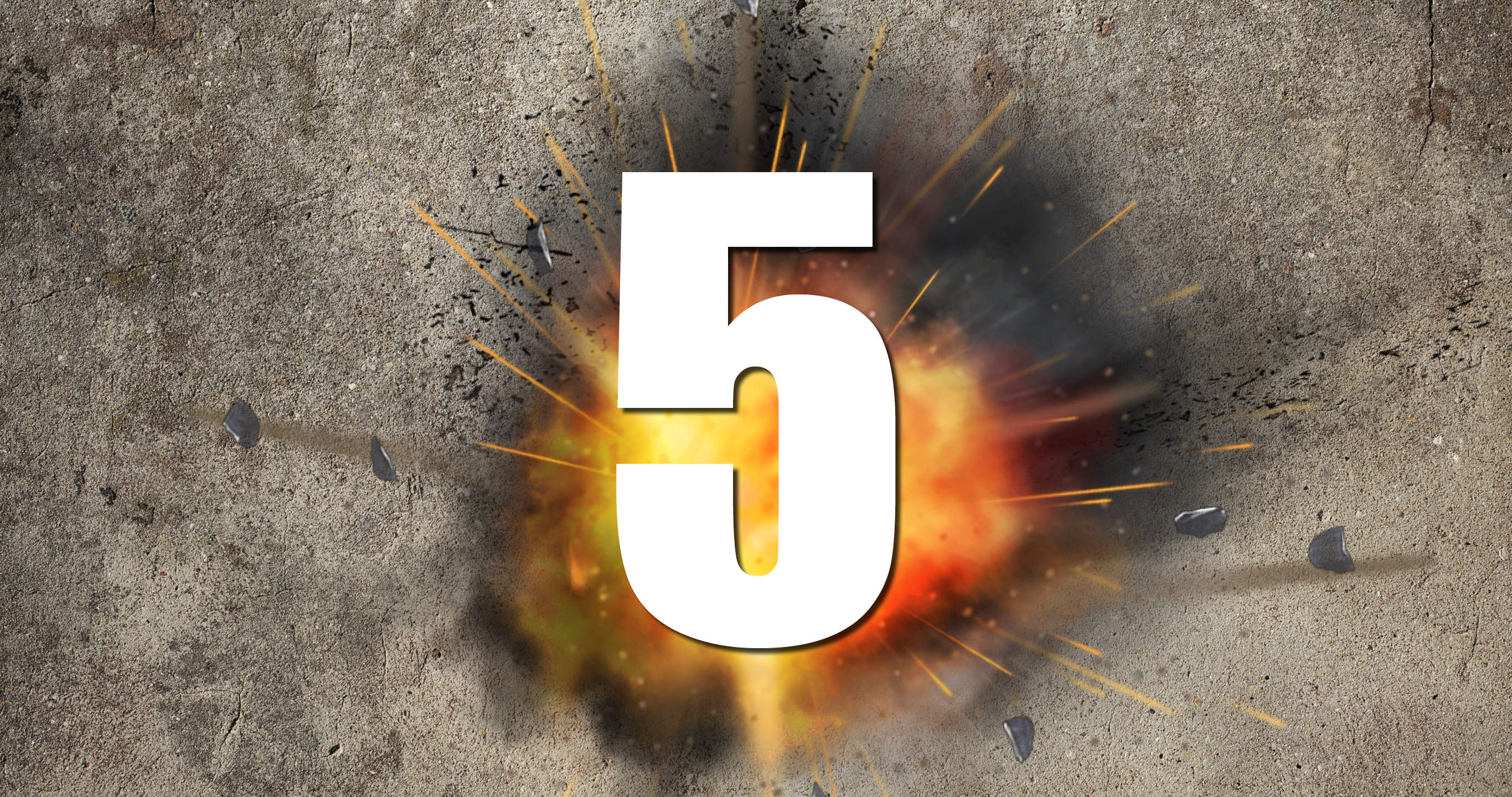 Today, we'll be looking at past mistakes and pick "5 Things We Got Wrong About AtG", looking at how we reviewed the various cards in our SET REVIEW that was released a couple of days after the release of the Across the Galaxy!

Read OUR PREVIOUS COLUMNS!
5 THINGS WE GOT WRONG ABOUT AtG!
Written by CLAUS STAAL & LAKE QUITTMEYER 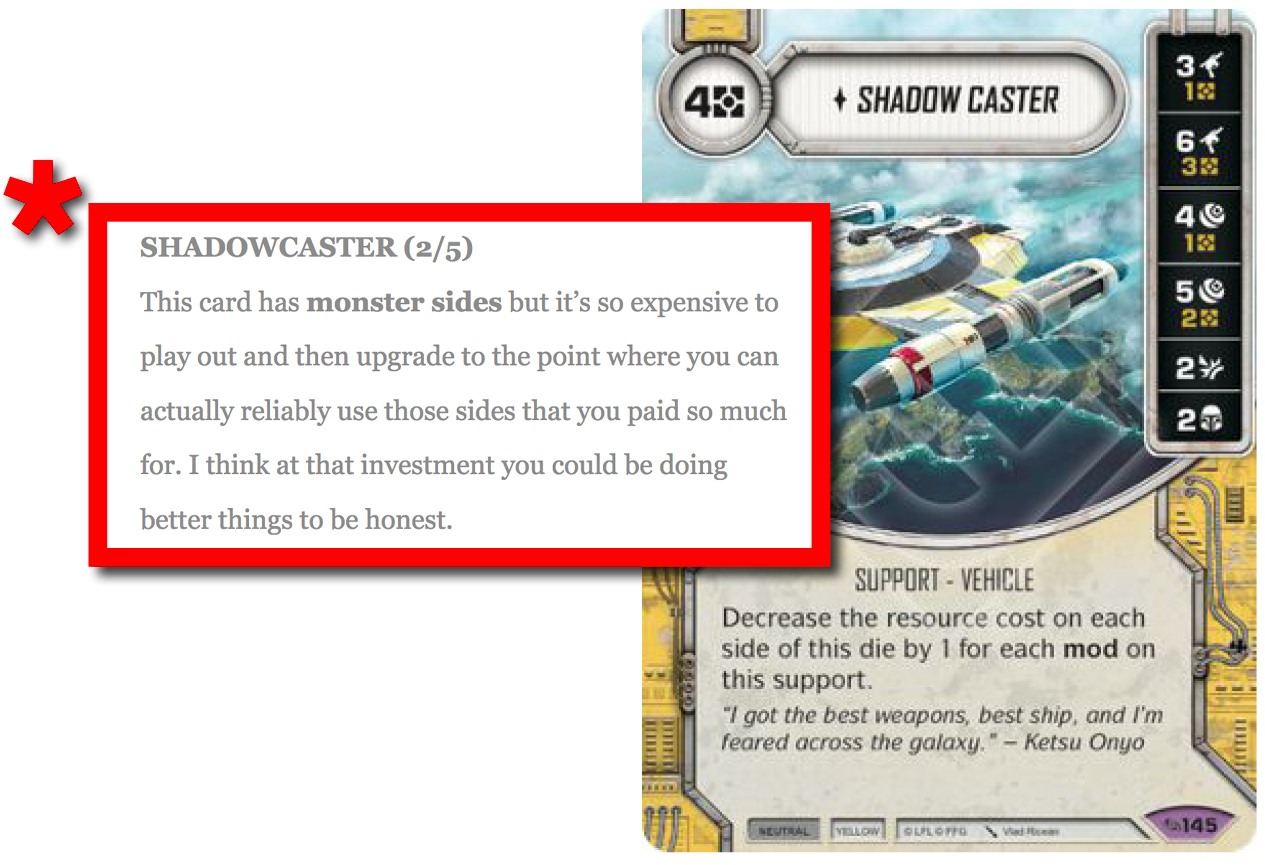 “This card has monster sides”: TRUE
“I think at that investment you could be doing better things to be honest”: FALSE

I think we all kind of slept on how good vehicle/mod/Armored Support decks would be here at YOUR Destiny. It turns out that upgrading a Shadow Caster is one of the BEST things you could have been doing with your resources. The Shadow Caster was so strong it actually warped the meta presence causing many decks to run otherwise useless cards such as Disable or Sabotage., while Vandalize snuck into the decks that were not already playing it!

The real trick is that the Shadow Caster was impossibly easy to play, all you had to do was have an extra resource (or discount from Weapon's Factory Alpha) and Armored Support and you were good to go. Loading up the deck with 12 Mod Upgrades and 18'ish removal cards was a more than viable strategy. In reality you didn’t need more than 1 or 2 mods to really start getting there. Not to mention that Strategic Planning pre-nerf was really letting you go to town on people.

2. DRYDEN VOS (Lake Quittmeyer)
Whoopsies, I think my inner Timmy got overexcited here. It probably didn´t help that I was just coming off of Fat Tires, eSnoke/eBazine/FO, so I was used to resolving big fancy toys. 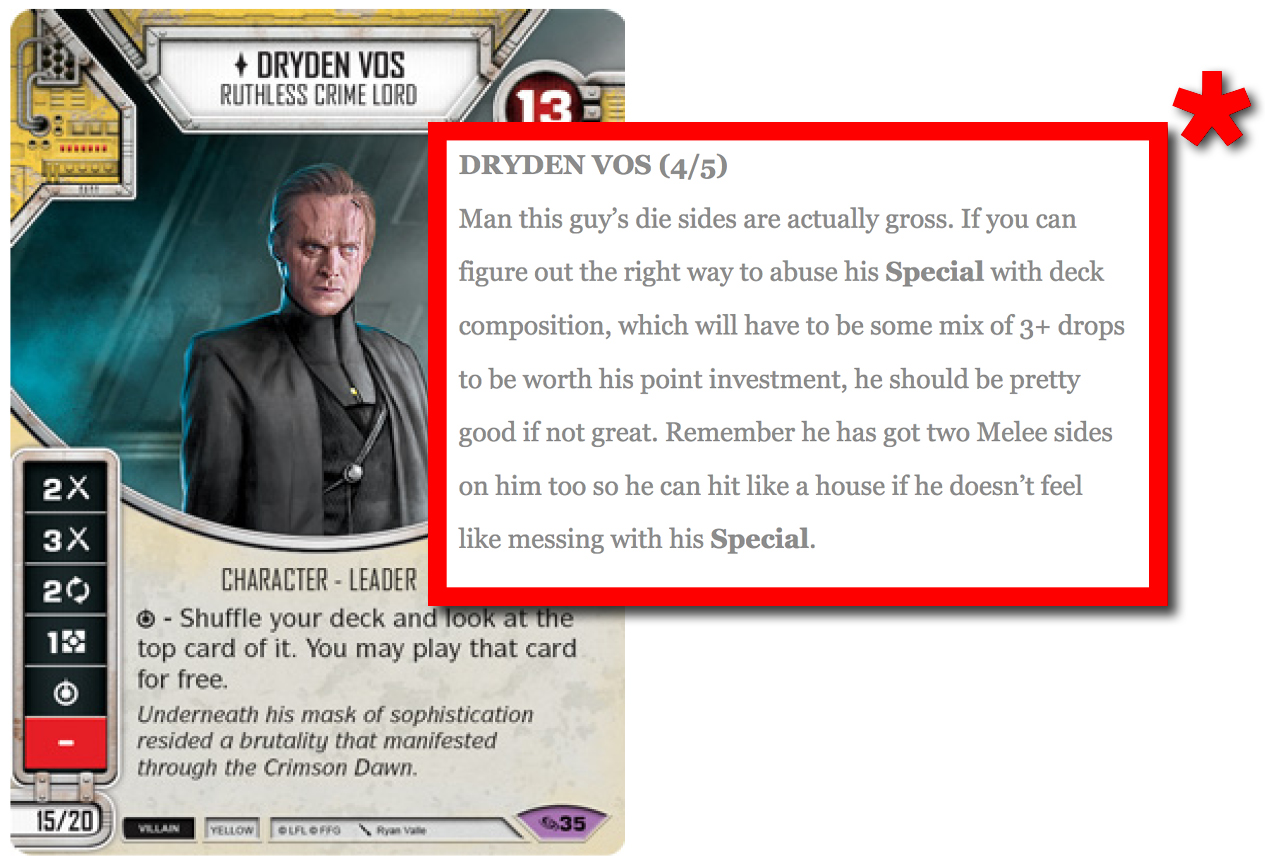 Yeah, so I probably should have given him a 2/5. One big issue was that Dryden Vos didn’t have a viable elite partner, so even though his dice are quite strong he could never really be as threatening in a character team vs. character team scenario. Sure he's pretty dangerous 1v1, but that’s not (usually *cough* Vader) how Destiny works. The other issue is that if you remove his dice for just a turn or two, that usually clips his wings so badly he can’t do anything.

3. IDEN VERSION (Claus Staal)
I honestly thought Iden Versio was destined for great things! I like her die sides and with Force Speeds still a thing at the time, I also thought her ability would have an impact. 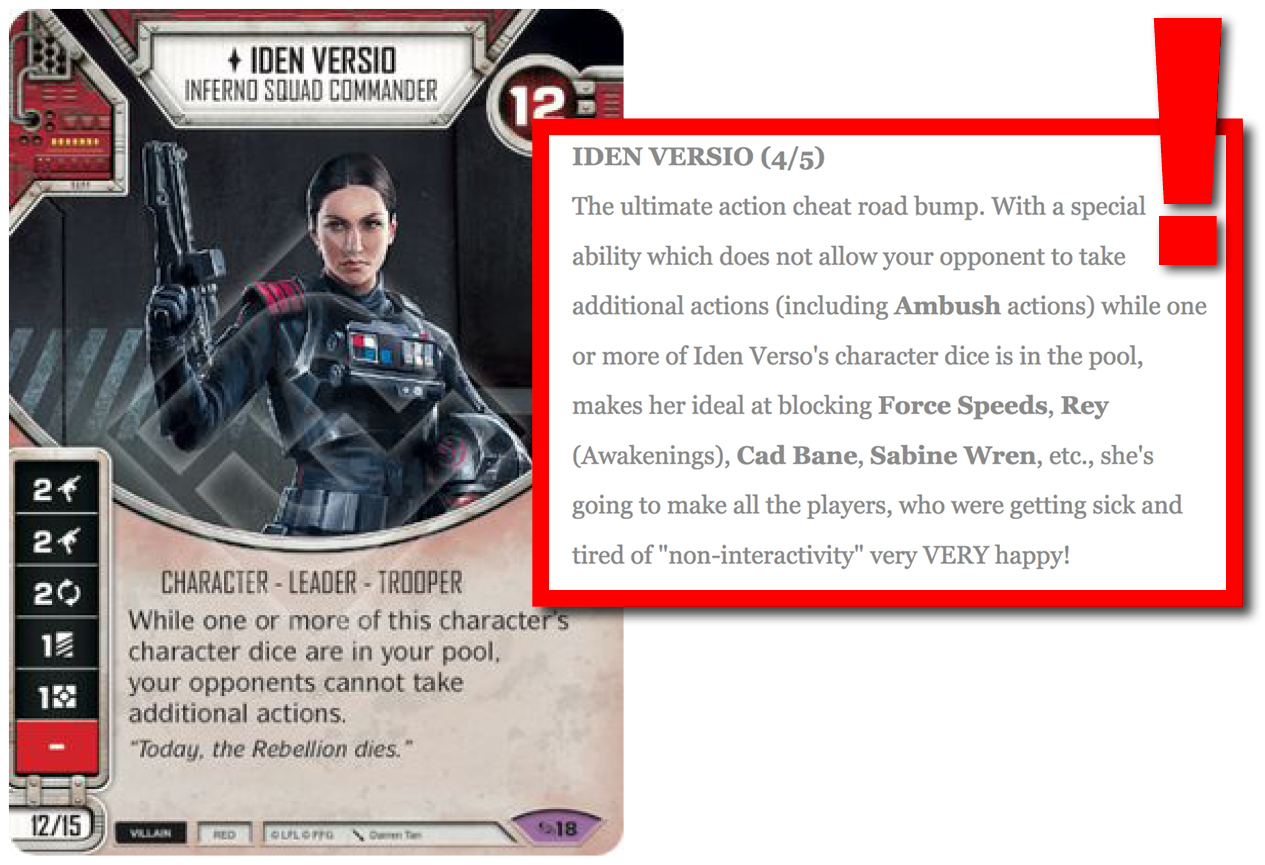 The truth be told, it didn't, and she's barely seen any play. It's a pity because I really like her, but now I find her ability to be less interesting and while that doesn't change the fact that she's a good all-round character, it's just not enough to lift her into the upper echelons of top characters. I still have hopes for her though, but would probably not make her rating higher than (2-3/5) ... damn ... 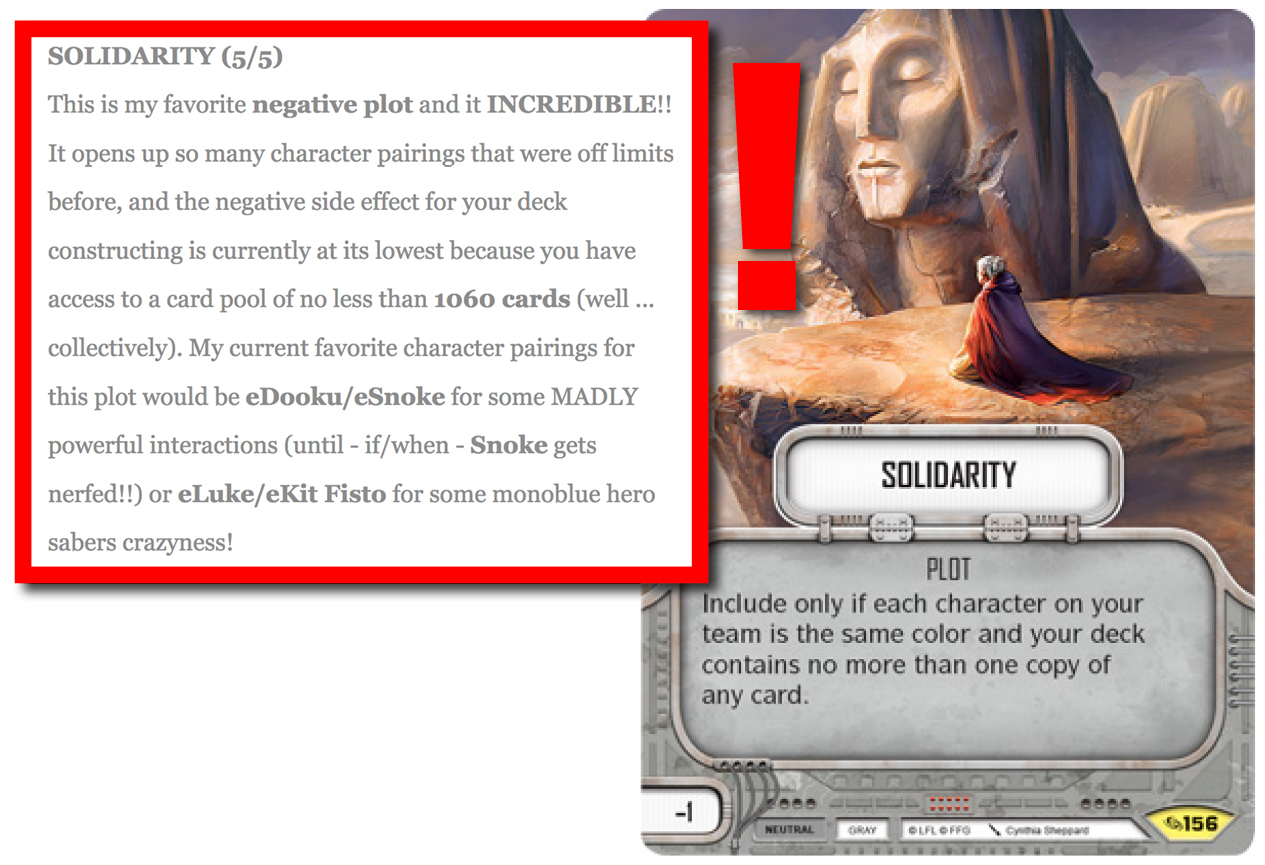 So, mistakes were made ... and this is probably one of my biggest in the entire set review! I think I somehow got carried away by the article that Jeremy Zwirn wrote close to the release of the set where he used Solidarity to play Vader and Snoke together.

The problem is, if Solidarity wasn't a thing with the largest card pool we've had available so far for Standard play, then it will just disappear into oblivion when rotation hit. My hopes were actually reignited for a second when Mads Utzon terrorised me with eQGJ2/eYoda/Solidarity, but then I whipped out my decked out Shadow Caster and bye bye hopes ...

Solidarity remains somewhere in my tattered hopes, but (5/5) ... not even close! 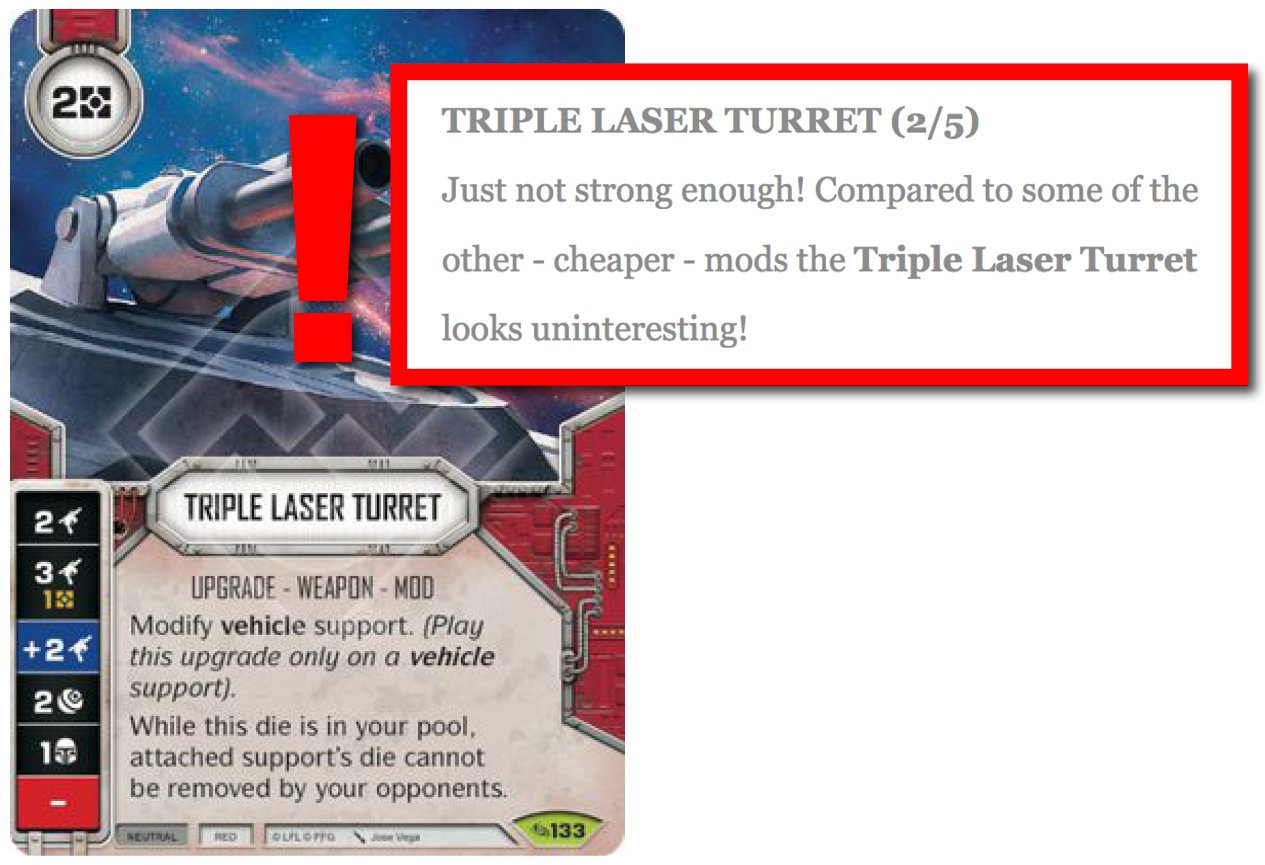 So, when I said that Solidarity was probably my biggest mistake of the entire set review, I was lying ... The irony of seeing the rating for the Triple Laser Turret is almost unbearable! The Triple Laser Turret proved to be insanely good and an absolute monster in almost any deck it was put in. Be it an Umbaran Hover Tank, Millenium Falcon or god forbid a Shadow Caster.

We were simply completely off in our evaluation of the impact of mod upgrades and if we were to go back and do the set review again, we'd need to redo every single mod upgrade. They are not only good in a vacuum, but jawdroppingly good in conjunction with almost every single vehicle.

It's definitely the design space from Across the Galaxy that has taken me the most by surprise, and I'm confident that it'll still be a thing going forward!