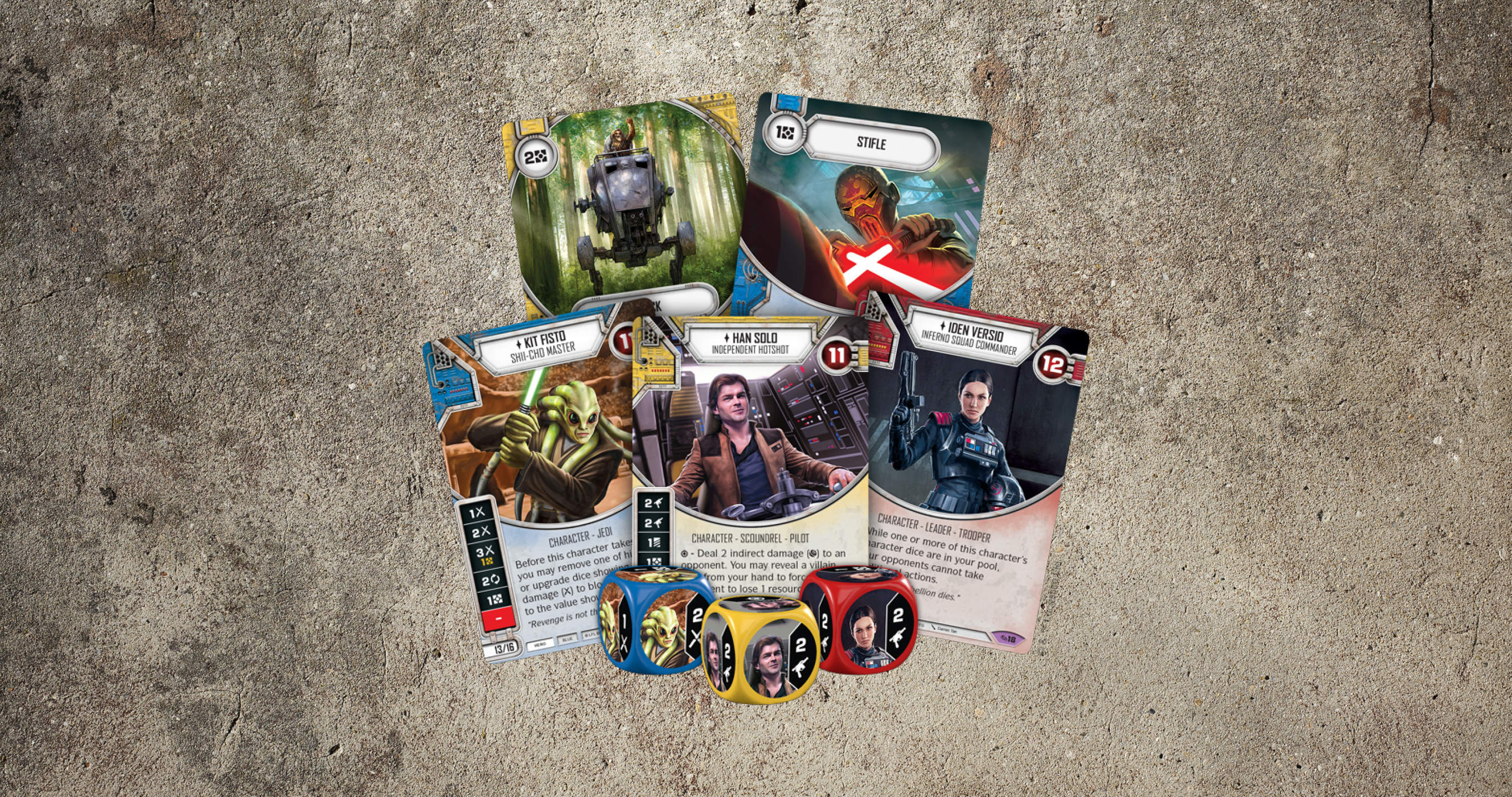 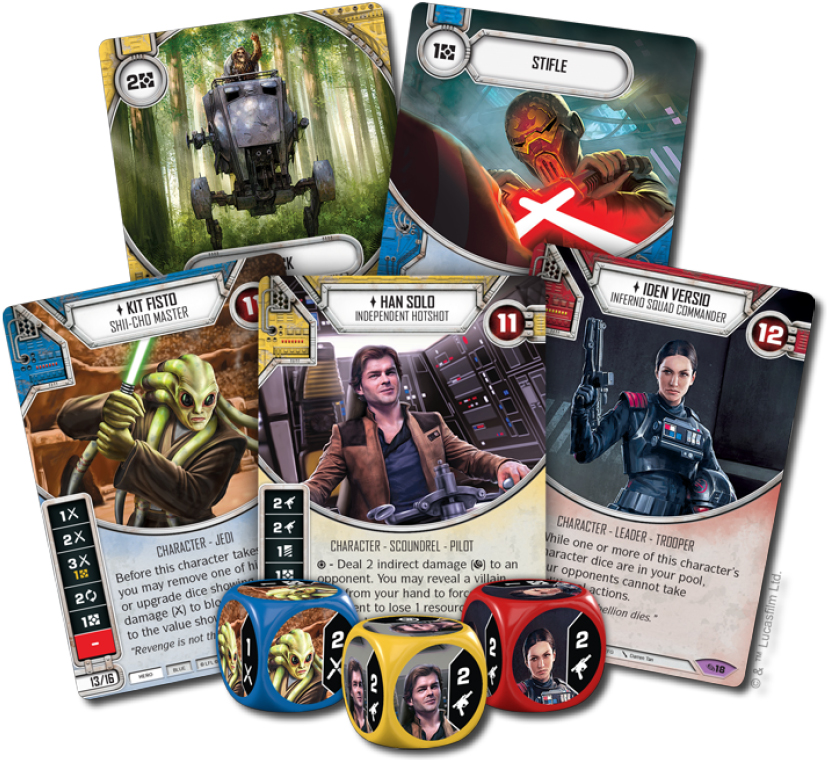 ACROSS THE GALAXY SPOILED!Just shy of 14 days after the initial North American release of the 5th expansion for Star Wars Destiny: Way of the Force, and the initial hype over Snoke, Old Man Luke, Pryce, Dagger of Mortis and whatnot still very much ON ... Fantasy Flight Games went ALL IN and announced the 6th expansion: Across the Galaxy!
This is absolutely massive for several reasons:
Let's start off by seeing the spoiled stuff: 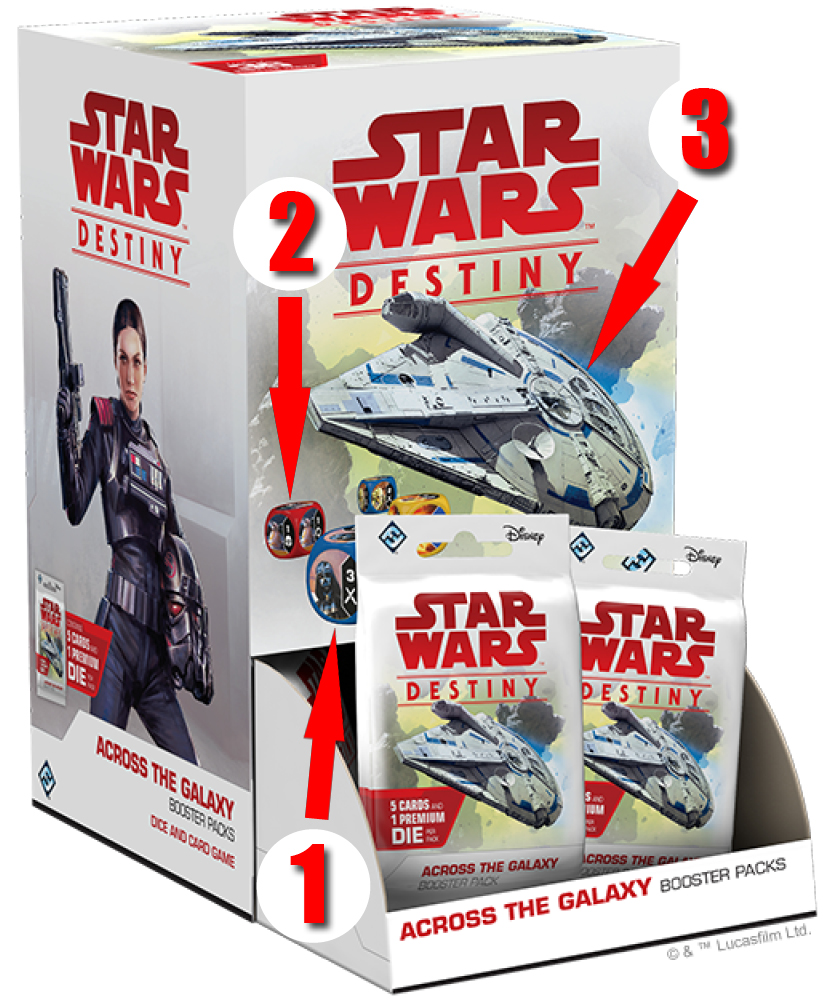 The box, apart from the characters spoiled in the article, displays what appears to be:THE SPOILED CARDS:In the article released by FFG (on July 18, 2018), there were several characters, events, upgrades and supports spoiled, and it does look enticing.
CHARACTERS:

First off, the 3 characters spoiled, one from each Faction (Neutral, Villain, Hero).

HAN SOLO: (NEUTRAL CHARACTER)
Our third iteration of Han Solo, following the Awakenings version and the version from the Legacies Luke Starter Set, who definitely looks like an improvement! 2 Ranged Damage sides, none of them pay sides, and a health boost (11hp) generally following the tendency that we've seen in Way of the Force as well as a Special, that puts him into the narrative of a "scoundrel", with an ability that can pair him up with villains as easily as heroes.

"Across the Galaxy" Han Solo definitely picks up from the Savvy Smuggler from the Starter Set and coming in at 11/15e should fit nicely with a number of characters! Strong die sides and the increased health should definitely make him see LOADS of play. JUST WOW!

IDEN VERSO: (VILLIAN CHARACTER)
The ultimate action cheat road bump. With a special ability which does not allow your opponent to take additional actions (including Ambush actions) while one or more of Iden Verso's character dice is in the pool, makes her ideal at blocking Force Speeds, Rey (Awakenings), Cad Bane, Sabine Wren, etc., she's going to make all the players, who were getting sick and tired of "non-interactivity" very VERY happy!

We've already talked at length about this subject, and while I do not agree with the generally negative sentiments, I can see how this is a delicate solution, and we might even see more upgrades that will mimick her ability in one way or the other.

With 12hp (which is incredible considering her points cost) and coming in at 12/15e she seems incredibly POWERFUL! Two 2 Ranged damage sides and a 2 Focus is just massive. Her die is incredibly good. There's a resource side for Logistics, a Discard side, and while just a fragment of the cards have been spoiled, I'm impressed with her already. Maybe Snoke is looking at a new partner-in-crime.

Compare her to newly released DJ, who is no lean kid himself, or old-timer Captain Phasma it's pretty clear how the power-creep is setting in.

KIT FISTO: (HERO CHARACTER)
A Chi-Choo Master with a weird'ish built-in "Guard'ish/Force Field'ish" ability, which means that the big 3 Melee damage for a resource can come to good use, even if you don't have the resource side to pay for it. And it's all kind of damage (Ranged, Melee, Indirect). Whenever his character dice shows damage his remaining health is augmented, although the damage is blocked, so unblockable damage will still take a toll on him (Go Synchronicity and Unyielding!)

Another character with a powerful die, even if the big 3 Melee is a pay side, but Kit Fisto hits a soft spot with his 13/16e points cost, and while he "only" has 11hp, which is amazing in previous sets, seems to be a bit low in the newer EPO-boosted Legacies meta. Compared to previous alternatives though, there weren't many 16e pointers around, and coming in at 17e points, both Qui-Gon and Ahsoka seems much weaker.

There are a lot of character teams that could be exciting with Kit Fisto, and looking at the characters spoiled, I think it's fair to say that Jeremy Zwirn, lead designer of Star Wars Destiny, has really pushed through with his overall vision of a game that will last longer (4-5 rounds, he has previously stated).
UPGRADES: 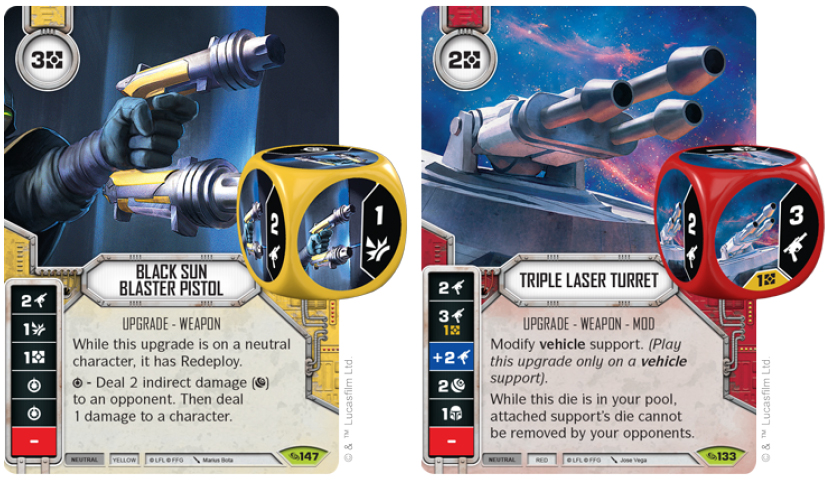 BLACK SUN BLASTER PISTOL
Alright, not all is massive hype, and while the characters were impressive, the Black Sun Blaster Pistol is less than impressive. Three damage sides, 2 Ranged damage and two Specials that deals 2 Indirect + 1 damage. Although it has Redeploy when attached to a neutral character, I do feel it's a bit underwhelming. There's some possibilities of Special chaining, but compared to guns like DL-44 Heavy Blaster Pistol this is sort of me'h. If this is what we are looking at as staple guns after rotation, then we are going to hit a new stride with ranged weapons. Which is weird considering they just released a kick-ass melee weapon: Dagger of Mortis.

TRIPLE LASER TURRET:
Uniquely special as it is the first upgrade characterized as a Weapon - Mod (ification). The Triple Laser Turret can only be played on Vehicle supports and while the die is in the pool the attached support's die cannot be removed, so potentially protecting the big damage sides of AT-ST's, etc. (well an AT-ST would be one expensive vehicle with a Triple Laser Turret attached, but still).

It seriously look as if FFG are going all in on exploring the vehicles avenue, and making it a part of the game which should be unavoidable. I'm a huge fan! Now, we just need villain vehicle decks to be viable outside of Thrawn decks - well in 2019 we sort of have to find out, right!
SUPPORTS: 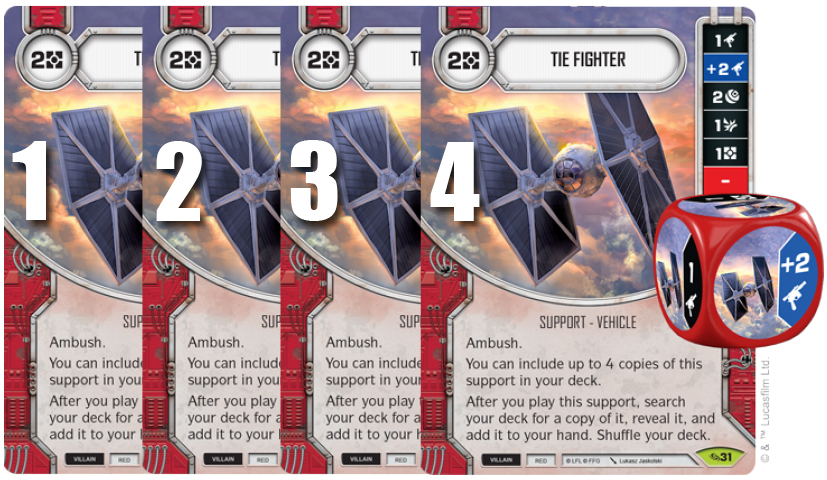 This is how many TIE FIGHTERS you can include in your deck! THE TIE SWARM IS BORN! Not a lot of things are more iconic to Star Wars than the TIE Fighter swarm emerging from Imperial Star Destroyer, and now it has arrived in Star Wars Destiny! 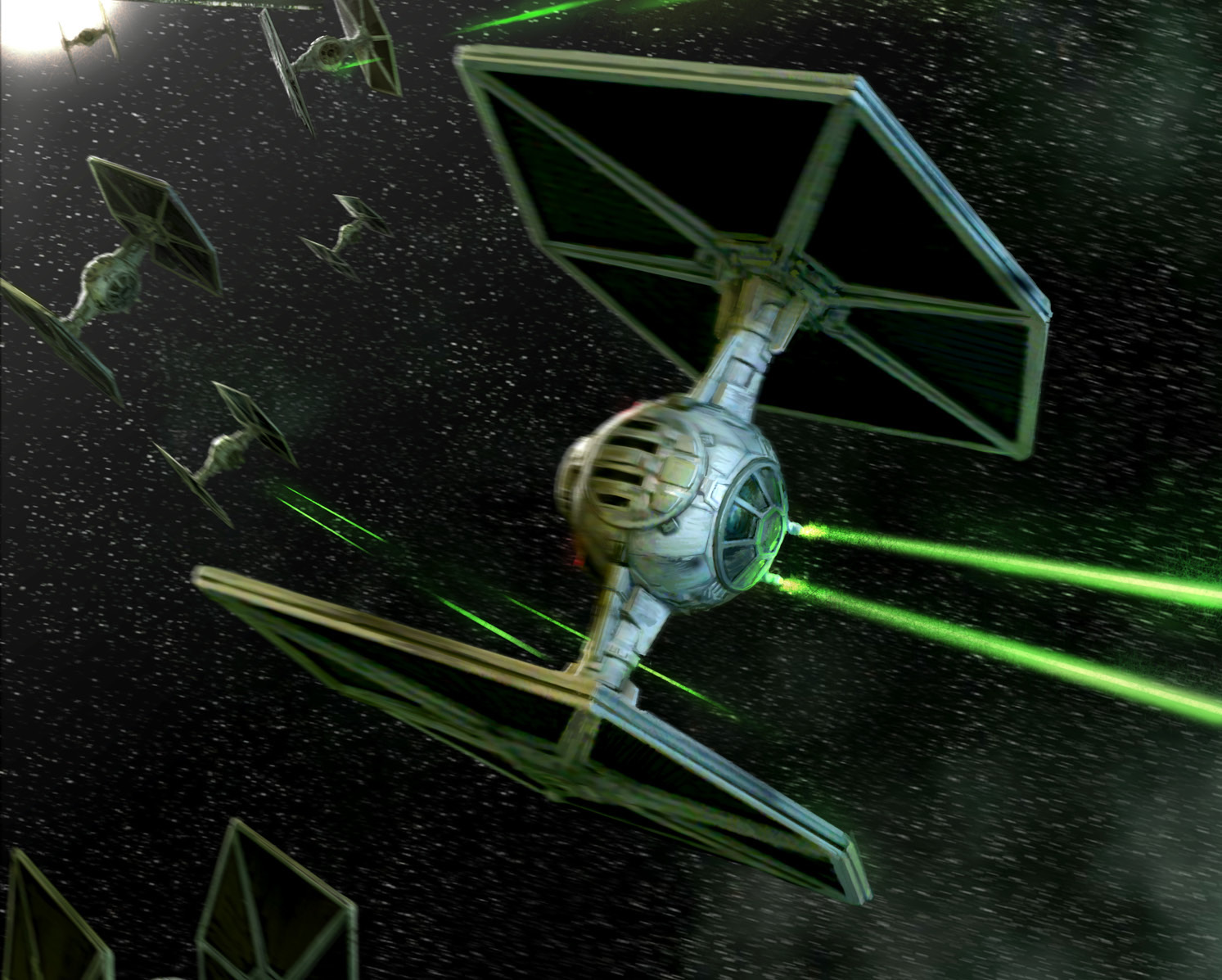 We all know what kind of resources the right set up can generate - if not then try and play against Thrawn/Snoke, then tell me that a TIE Fighter swarm is not doable round 1!!! O M G!!!! Of course the joy of playing Thrawn will be very short lived as he will rotate out in early 2019, but just let me live the dream - ok!

You'll learn to love them as well or die by them. Well, their die might not be mindblowingly impressive, but they are 2 points and still boast 3 damage sides, albeit one of the a modified side, but you have FOUR!!! This is going to have a massive impact on the game!
EVENTS: 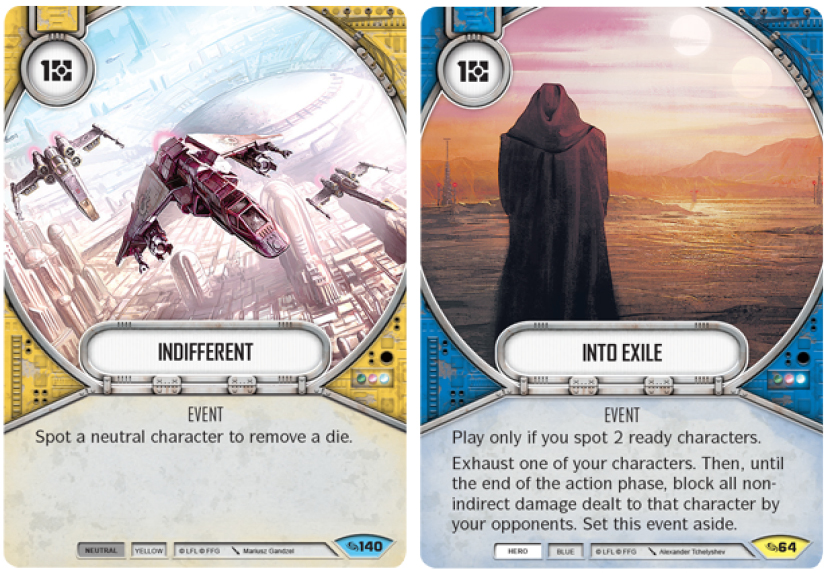 INDIFFERENT
And removal which is now going to see the thematic field of neutral characters, much like the Black Sun Blaster Pistol, examined further. We can expect to see many more cards that will make Neutral characters playable and a much more integral part of the game in very much the same way as Scum is a part of X-WING (another FFG game).

INTO EXILE
My first response is: WOOOOW!!!

My second response is: Hmmm ... On the surface this looks really menacing. Being able to protect a character against all blockable damage which is not Indirect damage seem incredible, or to protect characters that are about to be focused down in 3 wide decks. I like it and it could be a significant boost in the direction of longer games, where it becomes easier to keep characters alive!
PLOTS WITH NEGATIVE POINTS VALUE!Say what now ... this could be absolutely massive!

We'll have to wait to hear more about this, and the possibilities as well as the limitations, but my imagination is already going well. Dreaming about character combos that wouldn't have been possible before, but might be so now ... W T *** BIIIIP!
CONCLUSION:WELL DONE FFG!!! Thank you for giving not only new cards to play with, but keeping the game alive by spoiling new cards! It is obvious that the design team are going new directions in the game, and exploring new mechanisms, and while these spoilers are the first and few, I for one am pretty hyped about it!

The article says release in November 2018!!! Fantasy Flight Games, please do NOT disappoint me, you've got me all excited!