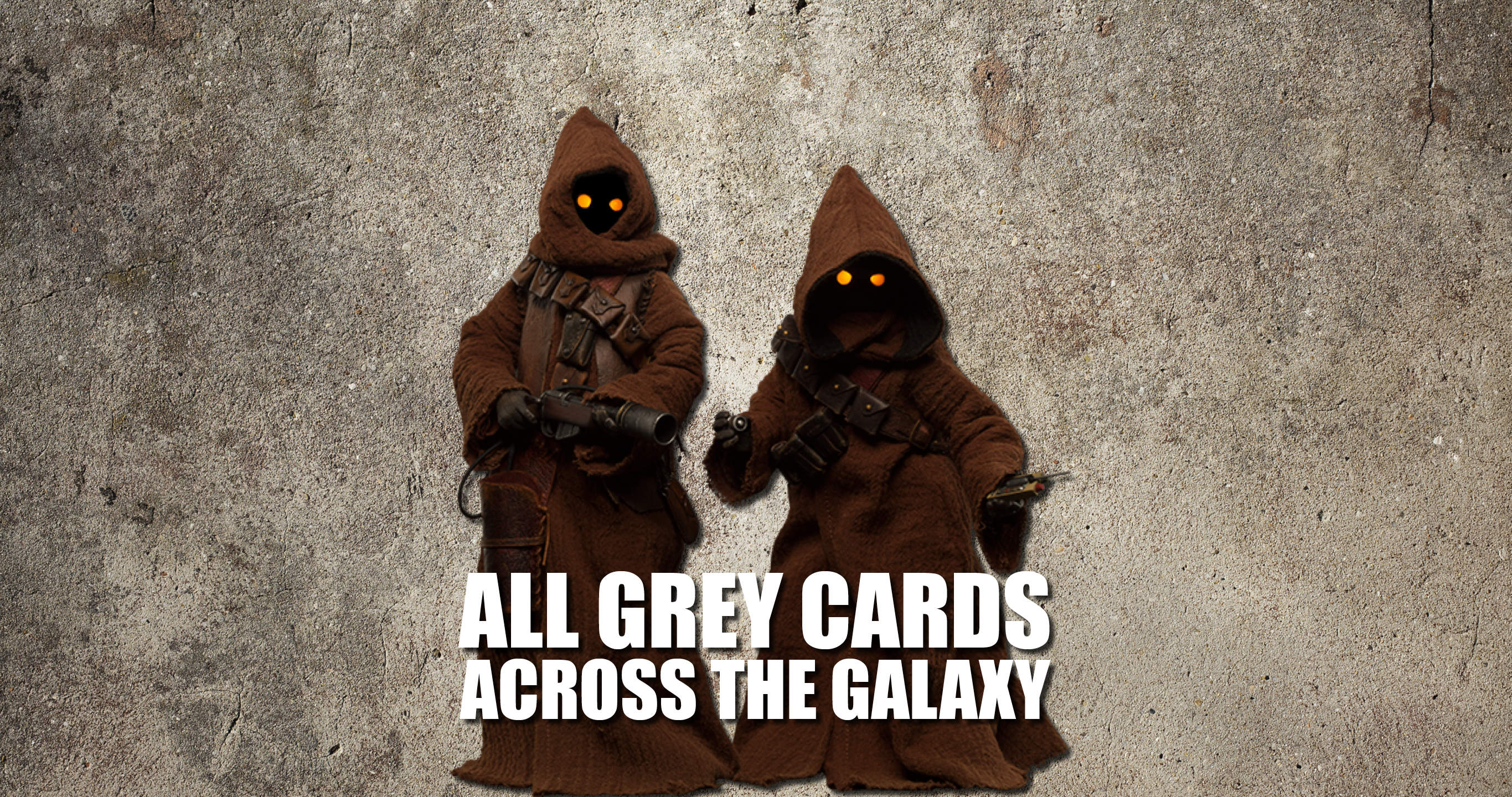 There are links to all the other parts of the set review at the end of this article!
1. GREY CARDS:Mods is new BIG thing in Destiny. And while some of the mods look great, I'm still sceptical on how big an impact they'll have on the competitive scene. There are some pretty cool plots though - and I'm starting to warm up to the idea of negative plots in particular!

Power Actions on Battlefields are apparently also going to be something we will have to get used to as 3 out of 4 Battlefields in Across the Galaxy has it. This means that while Battlefield control is important so are cards that allows you to use the Battlefield ability!
2. NEUTRAL GREY EVENTS:SHRIEK (0/5)
This is just a bad removal card! It is extremely expensive for what it does, and although the ceiling is incredibly high, similar to Feel Your Anger, Defensive Position, etc., it is simply not where you want to be with that a removal card. Sure, it might be able to remove Specials en masse, but at 2 resources I find it unimaginable that it will find its way into any deck - even after rotation.
3. NEUTRAL GREY SUPPORTS:T-16 SKYHOPPER (1/5)
The first time I saw the support, I mistakenly thought that you could play the mod you would be searching for in your deck for free, but then I realised that the designers just forgot to put the usual reminder text onto the card (i.e. paying the cost).

Obviously, if that had been the case (that you could play it for free) it would have been pretty insane and would probably have imploded the mod upgrade design space. Now, it's just useless. You are literally just paying 1 resource extra to play a mod on this support that has no inherent die. It is going to be used marginally, if at all, because it's BAD!

X-34 LANDSPEEDER (2/5)
Rerolling dice, yours or an opponent's, is the new big thing in the Across the Galaxy set. It's then a 'free' reroll every round apart from the round you play it (unless it's played with Tech Team, Rally Aid or Weapon's Factory Alpha - in which case it is also a free reroll on that round). I'm not really sure where to put the X-34 Landspeeder. I mean, it's not bad per se, but I just can't see including it in a deck.
4. NEUTRAL GREY UPGRADES:LASER CANNON (3/5)
I kinda like the Laser Cannon. The ability to deal damage just by activating is pretty strong and it can really beef up small vehicles and add a lot of pressure to your opponent. All the rating son mods are going to be dependent on how 'big' support/vehicle hate and anti-tech is going to be, but dealing consistent damage is always good!

SYSTEM GAUGE (3/5)
It's basically created to synergise well with the X-34 Landspeeder. I could actually see this being used as a defensive measure in many vehicle decks, replacing some mitigation cards and leaving space for more tricks in your deck. Being able to search for it with several cards in the new set might even raise it's stock a bit.

TARGETING ASTROMECH (4/5)
The Targeting Astromech can potentially be absolutely devastating, Making sure that your vehicle ALWAYS hits whatever die side you need can be ridiculous. Imagine a Pirate Speeder Tank that always hits Special or a Count Dooku's Solar Sailer that always finds 2 Resources or ... Of all the grey mods this is probably the one that entices me the most, and I could see it played in a number of vehicle decks that are not already flush with Focus sides.
5. NEUTRAL GREY PLOTS:

NO ALLEGIANCE (3/5)
One of the three negative plots introduced into Destiny, this is probably the one that excites me the least. This is not to say that it's bad, but its use, at the moment, is quite limited. The obvious choice is Han Solo and Qi'Ra, and while this might end up being pretty solid, I'm not sure that uses outside of that monoyellow character pairing is going to be a common sight. Boosting both characters with +1 health is pretty dope though!

RETRIBUTION (3/5)
The effect of Retribution is quite powerful, but adding +1 point to an already expensive character might exactly be what breaks the camel's back. Dryden Vos at 21points? Vader at 24points? Maybe it's a tiny TIIIINY way back for Palpatine (I don't mean that ... but it would be pretty awesome though).

When running a 20+ points character you are already spread kinda thin and losing another vital point is probably NOT where you want to be!

SOLIDARITY (5/5)
This is my favorite negative plot and it INCREDIBLE!! It opens up so many character pairings that were off limits before, and the negative side effect for your deck constructing is currently at its lowest because you have access to a card pool of no less than 1060 cards (well ... collectively). My current favorite character pairings for this plot would be eDooku/eSnoke for some MADLY powerful interactions (until - if/when - Snoke gets nerfed!!) or eLuke/eKit Fisto for some monoblue hero sabers crazyness!
5. NEUTRAL GREY BATTLEFIELDS:

LANDING DOCK - SCIPIO (2/5)
This is the the competitor to Weapon's Factory Alpha - just not a very strong competitor. Rerolling a die, and I'd assume they just forgot the reminder text so it is either yours or an opponent's die, is just not that strong! Right now, there are so many strong dice in the game that 'merely' rerolling rather than removing them is a losing game.

OCCUPIED CITY - LOTHAL (3/5)
Ouch ... that's some vehicle hate right there! Great card for any mill deck! AND it's an incentive for mill decks to be faster than before because the effect of the Battlefield is ongoing as long as you have control of it! Whether it will be able to compete with Wartorn Streets, Command Center and Imperial Palace is another matter altogether. It should at least give mill decks another shot at dominating vehicle decks where they've fallen short in the late Way of the Force meta.

THEED ROYAL PALACE - NABOO (3/5)
Wow .... If you spot a Neutral character I'd definitely strongly consider this Battlefield. Getting a resource AND taking an additional action is a pretty mean Power Action. I could definitely see this being used with Han Solo.