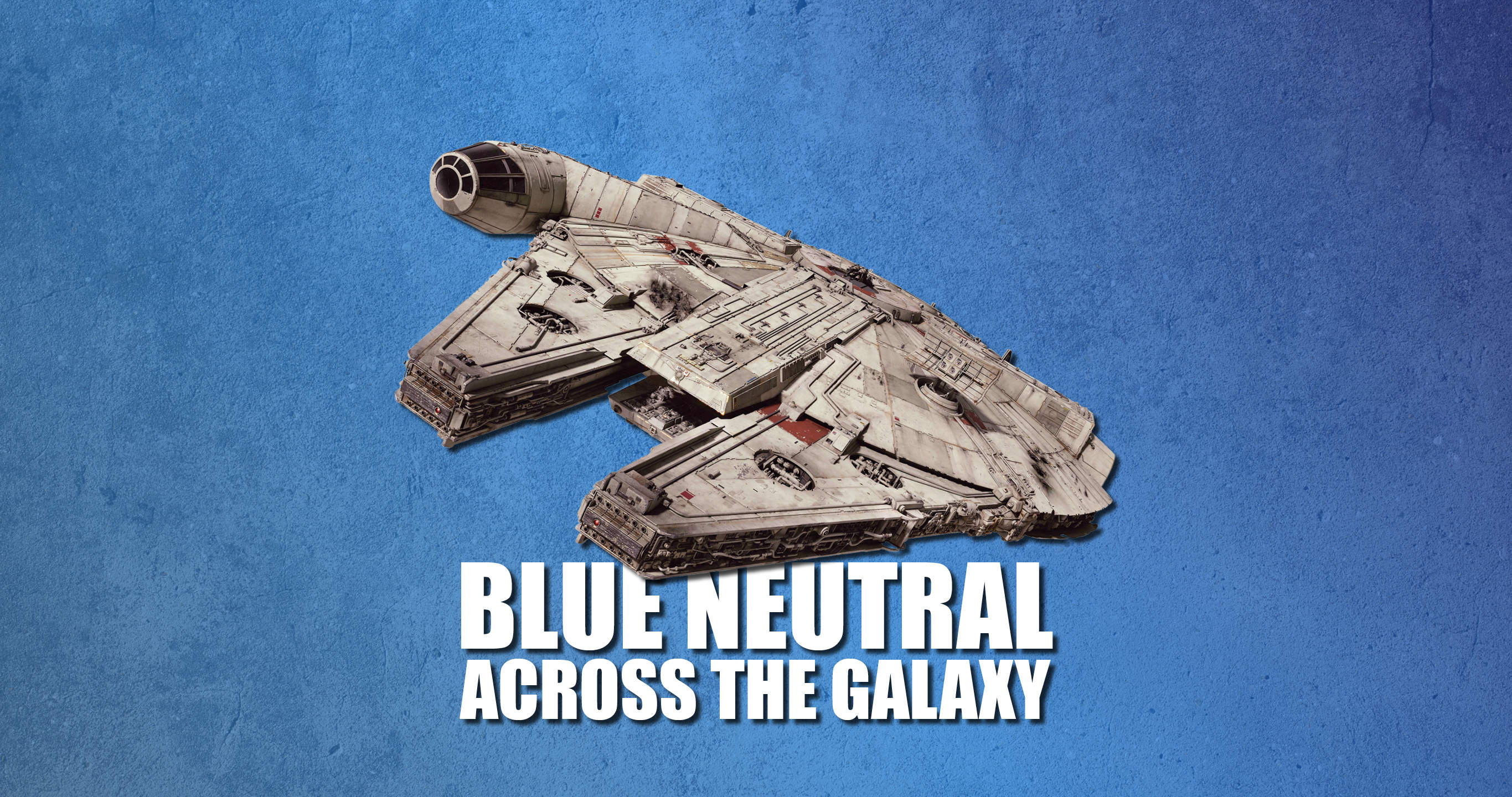 There are links to all the other parts of the set review at the end of this article!
1. BLUE NEUTRAL CARDS:Hmmm ... the neutral blue cards look quite weak, apart from the Treasured Lightsaber, in this set compared to the premium treatment they received in Way of the Force with both Force Wave and Dagger of Mortis. I guess you can't win all the time!

There is a bit of love for 3wide monoblue decks, while also adding some out of hand damage, but there are too many situational cards and a few that are so BAD that they'll NEVER see play!
2. BLUE NEUTRAL EVENTS:

AT ODDS (2/5)
It's interesting with an event that keeps staying in your deck, and when you retrieve it - if ever - it will essentially make sure you have a mitigation card for every single round. You are probably almost never going to be in that situation, but it's a fun gimmick.

I'm not super fond of removal cards that are too conditional, and IF they are conditional I prefer it to be similar to Flank or Pinned Down, where you can control the play conditions rather than it being left to variance. BUT, having said that, I do feel that the ability to remove 1's and 3's (primarily) is not a bad place to be. It takes care of 2/3 of the Chance Cube sides, takes away most of the Snoke sidekick dice, but will be horrible against Darth Vader - Terror to Behold, which is exactly why I'm probably not going to use after all.

COMMON CAUSE (3/5)
This is a MUCH weaker version of Boundless Ambition and will never be utilised by Villains (even if it works a bit differently). It might find some use in 3wide monoblue hero decks, in which case I actually fine the card quite interesting. The ability to draw 3 extra cards round 1 can be pretty amazing, and would allow a Plo Koon/Padawans or even a Yoda/Rey1/Ezra deck to reliably draw the cards, read: upgrades, they need.

CONFLICTED (4/5)
There are a lot of Blue Melee characters that are going to LOVE Conflicted! As long as you have 50% chance of hitting a damage side (Darth Vader, Young Vader, Kylo Ren, Royal Guard, etc.) you deal 2 damage and now on top of that have a die showing damage, and in the worst case, where you don't roll damage, you basically play Conflicted as a pseudo Defensive Stance. This is literally a win-win card! It combines elements from defensive hero cards (Defensive Stance) and offensive villain cards (Lightsaber Throw). What pushes the card from 3 to 4/5 for me was the fact that the damage dealt is direct damage to a character and not Indirect damage as we have almost become accustomed to in Way of the Force! 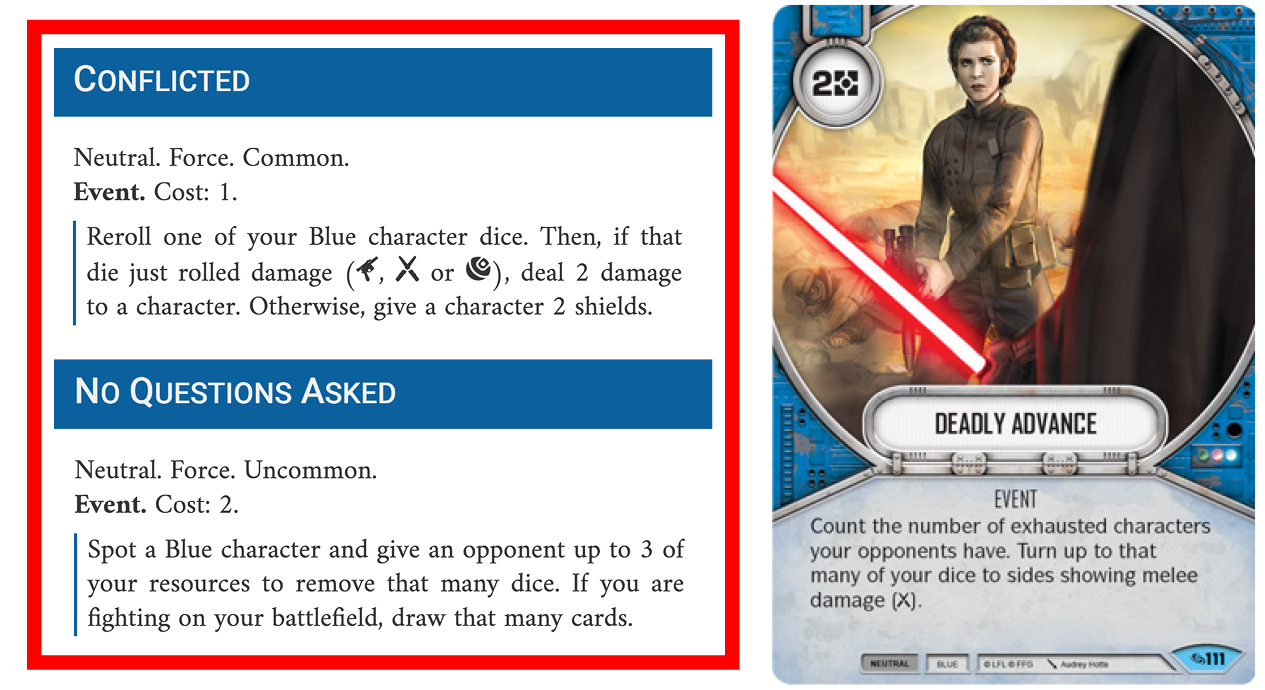 DEADLY ADVANCE (3/5)
This card is literally made for Padawan decks - or any other deck with a significant amount of Melee sides - as it allows them to get all their dice in the pool before using Deadly Advance to turn them all to damage sides. 2 Resources though is pretty steep though.

NO QUESTIONS ASKED (1/5)
Super funky removal card which is really difficult to evaluate objectively. At a glance the card is BAD! As in really really really BAD! Giving your opponent resources is almost never something you want to do. Obviously, removing 3 dice showing lethal damage to save a character can be exactly what you need to turn a game around, but more often than not it sounds like you are losing this game anyways (this is obviously said totally outside of context).

The added bonus of drawing cards if you play on your battlefield (it doesn't matter about controlling the battlefield) offsets the negative a bit, but not a lot. The ceiling on this card is pretty high, but the cost of 2 resources feels prohibitive and so does giving your opponent resources.

RELINQUISH (3/5)
I could actually see Relinquish useful for some decks. There are some cards that are the gravitation points for decks and is necessary for the deck to run smoothly, i.e. Sith Holocron or Chance Cube, and being able to return that upgrade back into your hand from a character which is about to be defeated is actually pretty cool. I'm not sure it will see a whole lot of play, but that's not necessarily due to the card being bad per se, but simply an effect of the card pool growing so large that there are plenty of cards to chose from that will make your deck tick-tock.

YOU WERE MY FRIEND (2/5)
Interesting removal card that sports a reference to the new Darth Vader for those rare instances where you actually do not want to remove a die. I'm not a fan of turning dice over removing them due to discard to reroll mechanism, but that's of course not a problem if you have plenty of blue cards in play.
3. BLUE NEUTRAL PLOT:

BITTER RIVALRY (2/5)
Continuing the new design space of negative plots Bitter Rivalry is going to make some new interesting Blue/x character pairings possible, but it comes with a pretty hefty price tag. Having your opponent dealing 2 Unblockable damage to a character of his choosing AND draw an extra card is C R A Z Y! I honestly think that the Grey Neutral negative Plot Solidarity will be much more useful although strategically limiting, but I just can't see how the positive effects of Bitter Rivalry is outweighed by the benefits.
4. BLUE NEUTRAL SUPPORT:

FORESIGHT (1/5)
IT doesn't really do anything?! Does it? So, you get to look at a card from the top of an opponent's deck and maybe prevent him from using it ... that seems incredibly weak, even if combined with a number of the other cards that filter or reorganises your opponent's deck. Waste of space.

NEXUS OF POWER (3/5)
Nexus of Power belongs to the same family as Lightsaber Training Staff, and basically allowing you to add a base die side to go with any modified damage side you want. This is naturally of benefit to characters, upgrades - i.e. Treasured Lightsaber - and supports with loads of modified die sides and only few base die sides. It could also be cute with a Force Misdirection!
5. BLUE NEUTRAL UPGRADES:

FORCE LIFT (3/5)
We are pretty used to 3cost Force Abilities to be pretty powerful and Force Lift doesn't disappoint. I almost wanted to give it (4/5) because of its versatility with double Focus sides and 3 damage sides with two of them, the Specials, giving the possibility of EITHER dealing damage or providing some cover for aggro decks against vehicles. It is far superior to Force Rend although it doesn't destroy a vehicle/support, but rather return them to your opponent's hand, which in itself can be pretty disruptive. I think this will slot nicely into a Talzin/x deck gravitating around Holocrons!

SHATTERPOINT (1/5)
The Special on Shatterpoint is quite good, but the payside and the resolve conditions are too steep. Putting more than two Force Ability dice in the pool at any given time is hard - and so rarely occurs that it feels like a waste of time. Although Shatterpoint is just 2 resources, I doubt it will see much play. 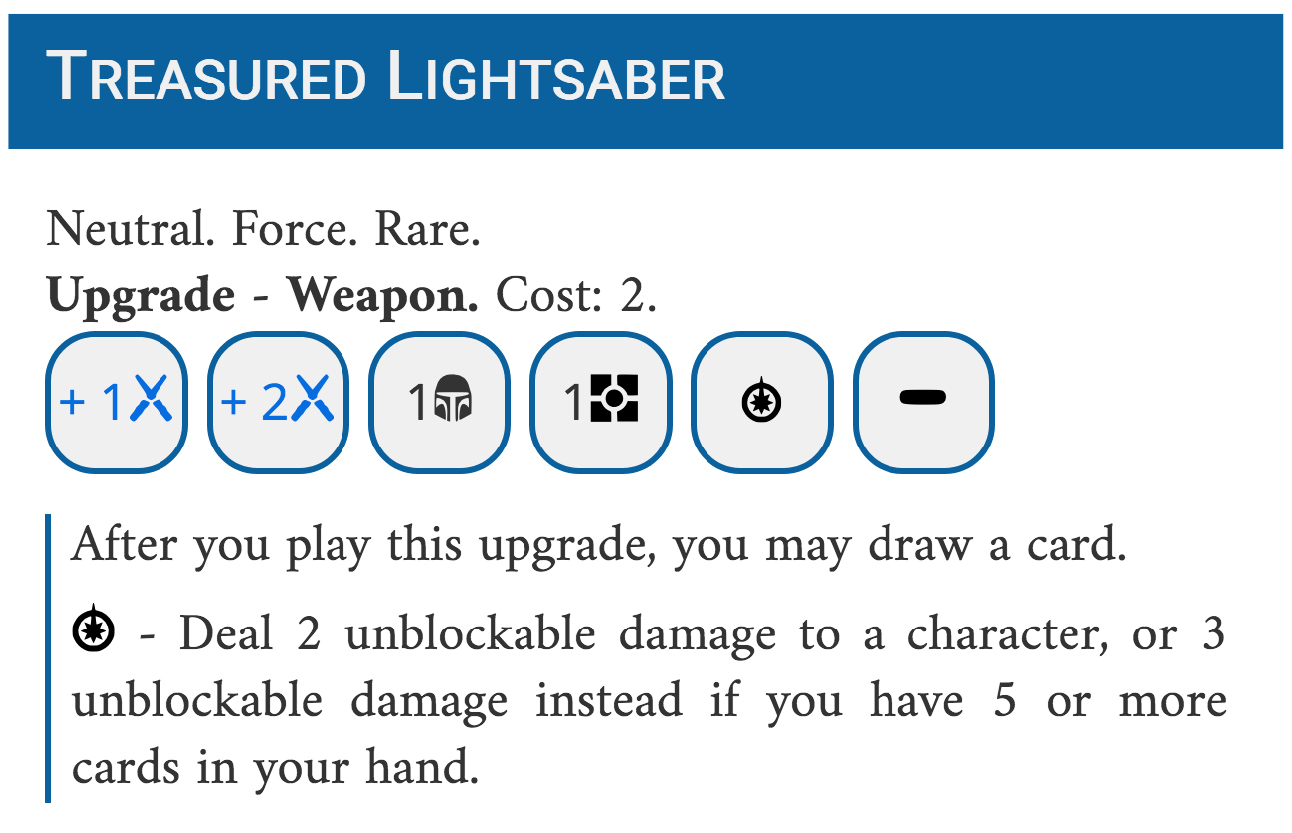 TREASURED LIGHTSABER (4/5)
This is a REALLY GOOD 2cost upgrade!! Sure, it doesn't have any base Melee sides, so you'll need to secure that with plenty of other dice in the pool or characters boasting strong character dice! But the fact that it 'replaces' itself when playing it AND thereby making the maximum Special trigger more likely on that round is pretty crazy! This will definitely be a go to sword for many Melee decks!