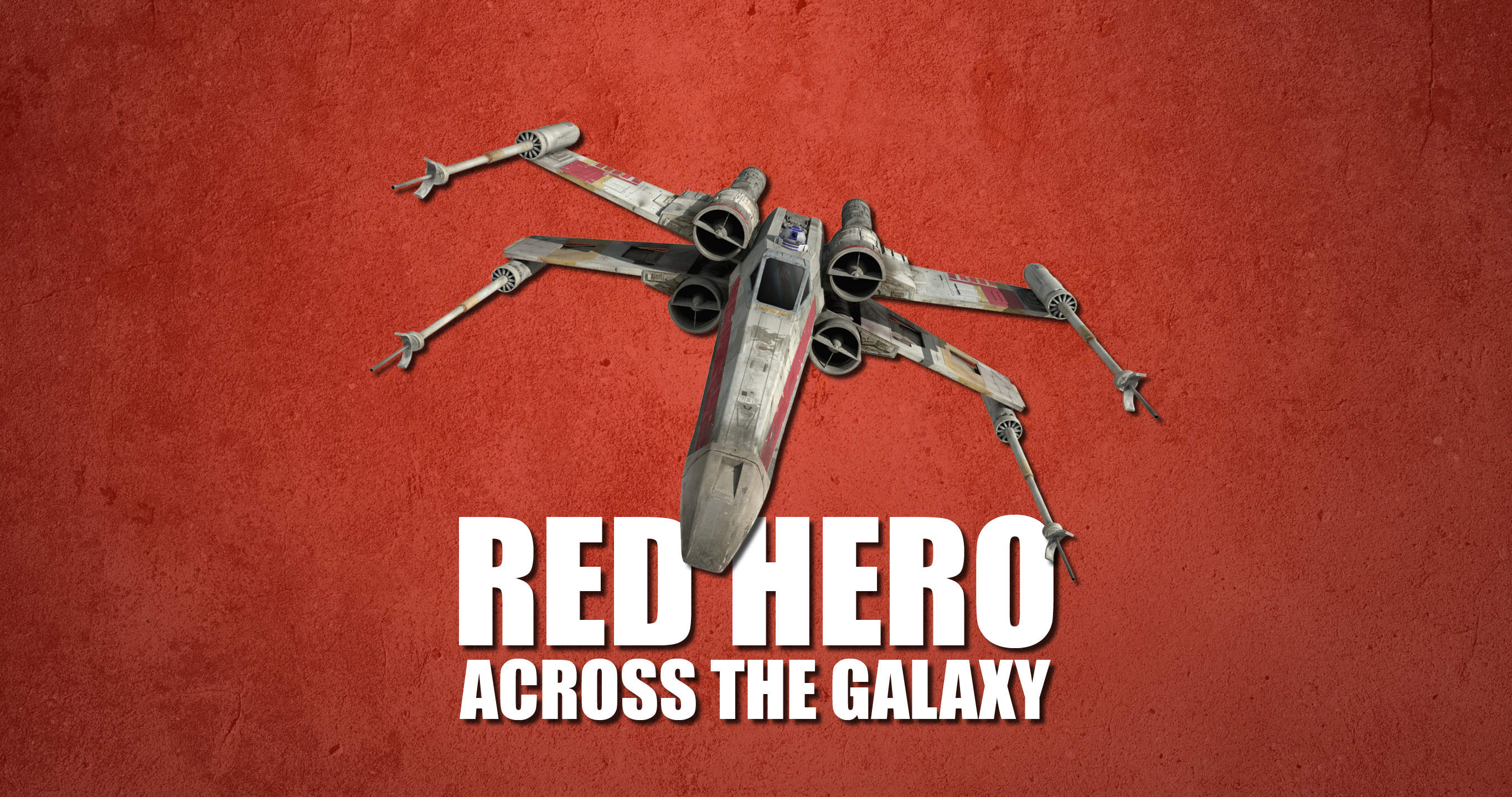 There are links to all the other parts of the set review at the end of this article!
1. RED HERO CARDS:Top tier hero decks with Red in it have been either very slow vehicle decks (4-wide, Drive-by-Shoting) or quite fast aggro decks (Rey2/Poe2, Poe2/Cassian). This set add some cards to those concepts, with a big focus (9/16 cards) on support based decks.

In addition to this, the red set gains a strong character, an awesome vehicle and a bad ass gun. Removal stays a problem with the main difficult factor being to fulfill the play conditions, like Battlefield control or spotting x.
2. RED HERO CHARACTERS: 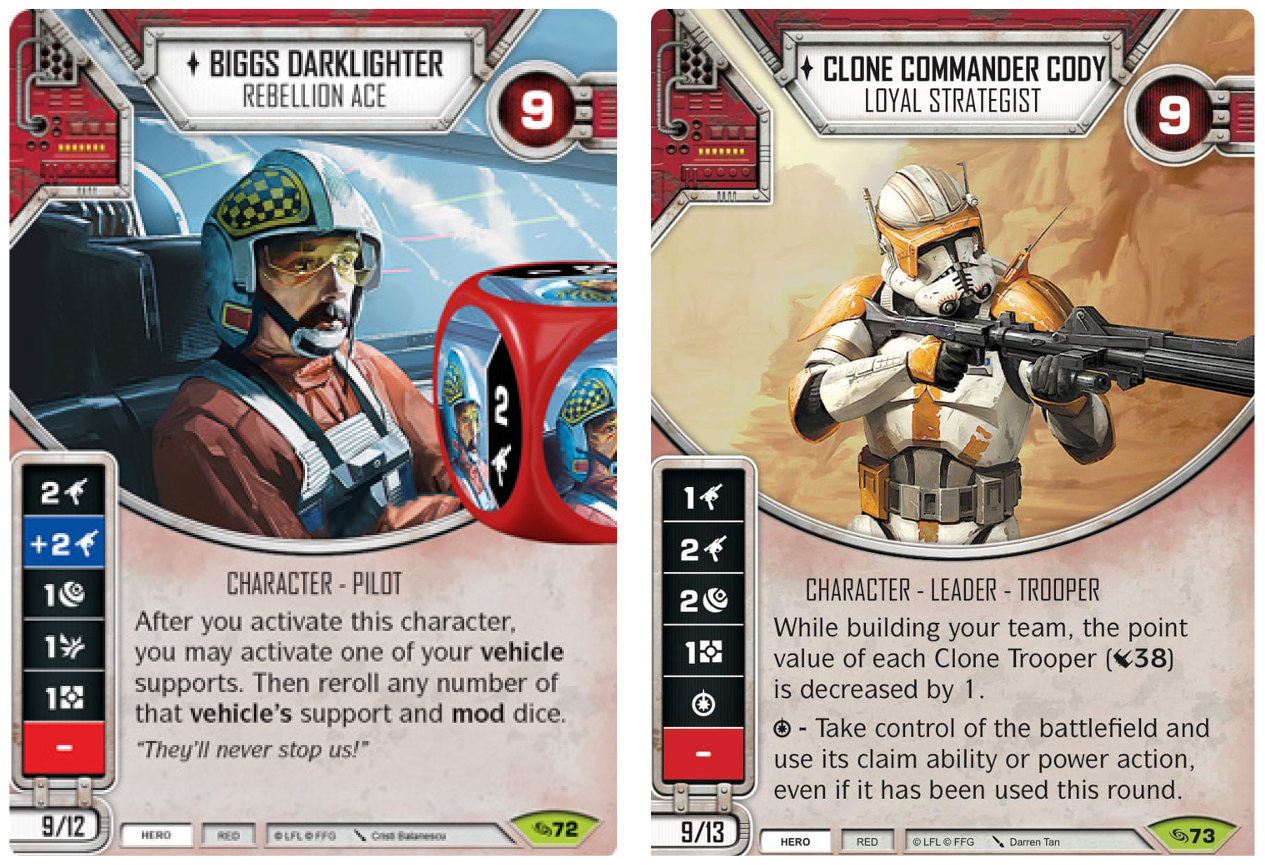 BIGGS DARKLIGHTER (3/5)
With the new mods implemented in the game, this character will find his place in hero vehicle decks, that are focused on that particular aspect. The built in Partnership (without action cheat) and the reroll is very nice to have when you start upgrading your vehicle supports. His die, his health and that sweet ability is totally worth the cost of 9 points. I would not recommend to play him elite if you have other options.

A decent pairing could be: Biggs/eYoda/Hired Gun

CLONE COMMANDER CODY (2/5)
After Rex, Commander Cody enters the battlefield. I think he has a very good die, but is in a tough spot with his elite cost (13... yeah, everyone has to face Yoda at that number). For nine with one dice though, he could be playable. Pair him with Sabine and you have a use for every one of his die sides, notably the Special because Sabine usually brings a strong active battlefield. And Michelle A. showed us with her Sabine/Hera deck at the German Nationals 2018, that Red is a good colour pairing for Sabine when she managed to make the top cut.

You can also consider using Cody's ability and pair him with 3 Clone Troopers for a 4dice 33hp TANKY monored deck. Even a Cody/eRex/ or eAayla/ or eLuke2 - Clone Trooper sounds interesting. And interesting does not mean tier 1!

JYN ERSO (4/5)
A straight forward die with all useful sides, a really good ability and 12 health for just 13/16e. Knowing what your opponent will be doing next round can be very impactful in the hands of a skilled player. Having the possibility to pair her with Cassian sounds awesome. Deal damage and take away your opponents options with those combined mill effects.

BUT the lack of a Resource side would force you to put some resource generation cards in your deck. Well connected for example is interesting because after you activate Jyn Erso, you can decide whether or not it is worth it. Maybe combine her with a sugar daddy like Yoda? With the little green man, mill would be an additional option if you do not find enough damage. And having multiple options, as we've seen with Rose/Jedhas/LTP to win a game is always great.

REBEL ENGINEER (3/5)
Another character to support mods. Searching for cards in your deck brings so much consistency, especially if you can do it multiple times. The downside of his ability is, that you could draw into 4 important cards and then lose 3 or all of them. The Rebel Engineer is cheap for 8 health and a very good support die, so he will probably see some play in those mod decks, while Rose will still shine in HWK-290 and Crait Speeder decks.
3. RED HERO EVENTS: 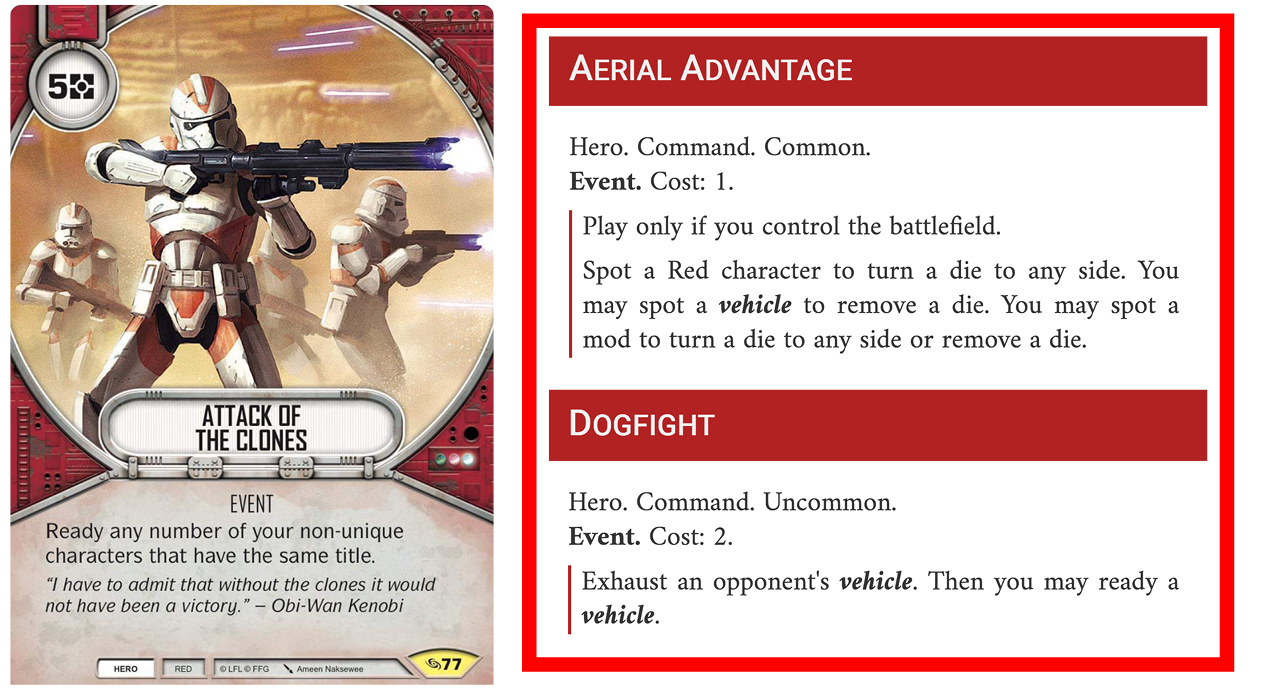 AERIAL ADVANTAGE (3/5)
Turn a die and remove two for just 1 resource?! That is insanely good! BUT there are a lot of requirements that need to be fulfilled to use its full potential. Hardest to obtain will probably be to control the battlefield, because hero vehicle decks are usually very slow. And it is probably not worth it to put Rex and a Clone Trooper in your team just to be able to play this card. Ground Batallion is probably the better alternative to set it up in a slow deck.

ATTACK OF THE CLONES (0/5)
Attack of the Clones is probably specifically targeted at the Cody – 3 Trooper Deck and can potentially reactivate 3 (Clone Troopers) to 5 (Gungans) non-unique characters. But for 5 resources?! No, that card will not see much play. WAY too specific and WAY too expensive!

DOGFIGHT (3/5)
This is a good tech card if the meta gets flooded with vehicle decks. And it seems like the game has moved and will continue to move in that direction. It is worth the cost, but less good against aggro and mill players. With all the mod stuff happening though, it could still be worth to pay 2 for a reactivation. 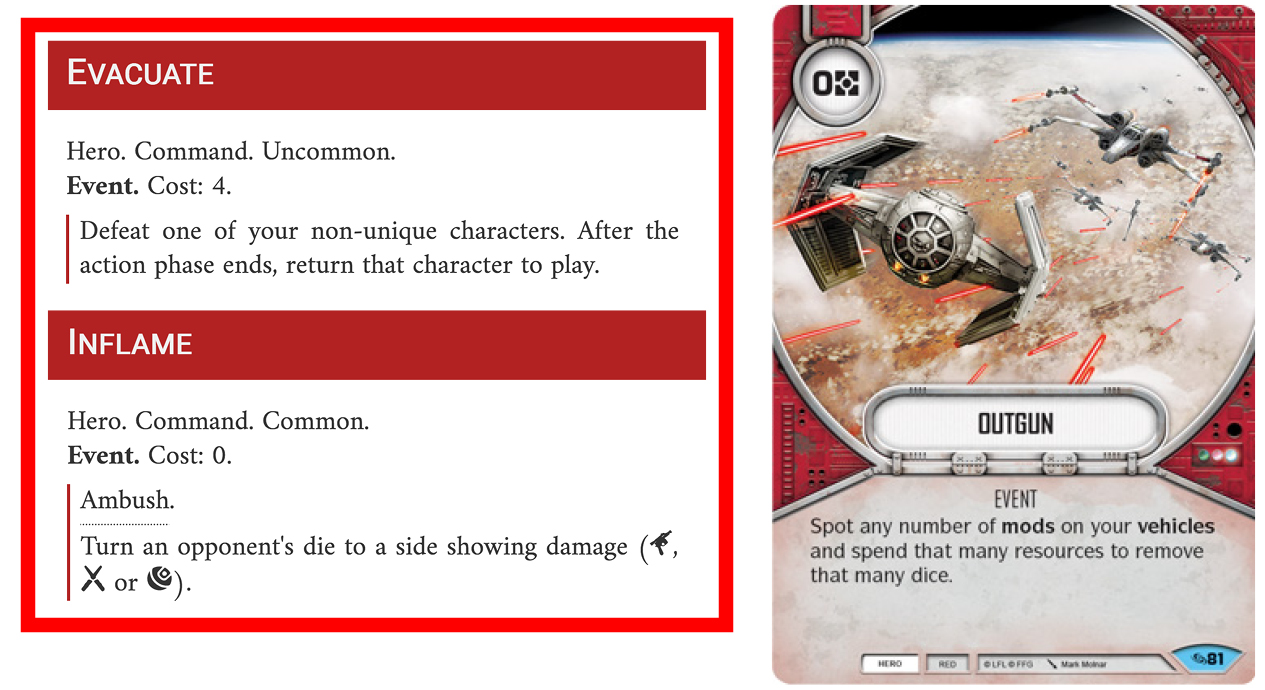 EVACUATE (1/5)
If you are able to set this up correctly, for example with a 1 health remaining Hired Gun it is a healing of 8. Even if that sounds quite impressive, it is still conditional and depends on the damage allocation of your opponent or relies on your opponent using Indirect damage. That being said, there are ways to play around it, like it was often done with Dark Ritual.

INFLAME (1/5)
A pure combo card with which you can set up a removal like Turn the Tables or Dive. Or you could turn a die to a weaker side or a blue side, so your opponent resolves less or no damage.

OUTGUN (2/5)
Time will tell if that condition is hard to obtain, but for now it doesn't sounds that easy. If you are playing a mod based deck with the Rebel Engineer, this is a very good and flexible removal card.

TURN THE TABLES (2/5)
Cards that have specific die sides showing as play condition usually does not see much play. IF you are able to ensure that you have a focus showing regularly, this card can be ok'ish. It is just targeted at damage sides and that's where i have a problem with the 2 cost. Without the condition, this card would be playable – as is, it is just meh.
4. RED HERO SUPPORT:

ARMED ESCORT (3/5)
Being able to protect your main character for one round can be very useful. And you get it for 0 resources. This new concept, to have a special effect for one round is interesting. You have to consider that it can be very situational and in this case a waste, if your opponent is able to play around it or does not find the needed damage sides early. 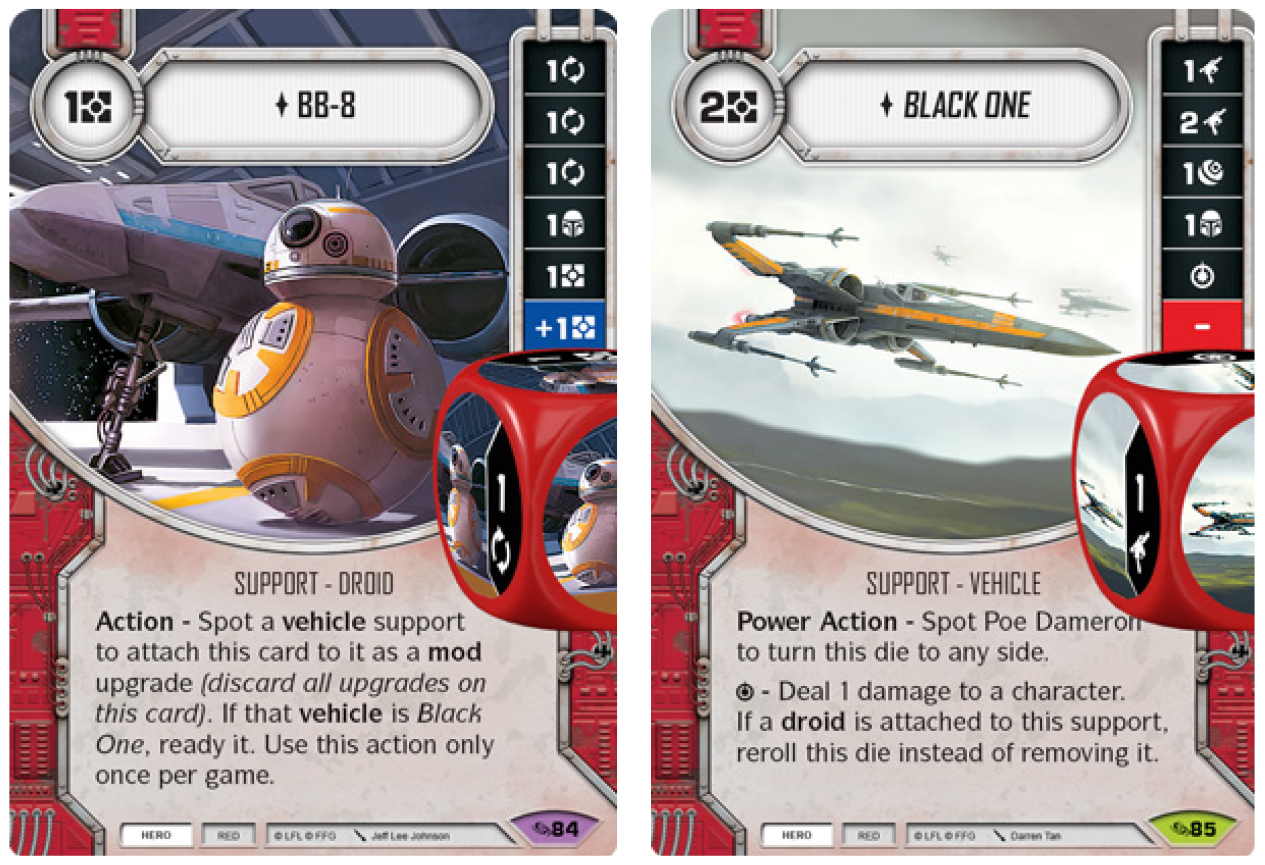 BB-8 (2/5)
Probably the worst legendary of the entire Across the Galaxy set, but a playable card if you consider it to be in a mod based deck with Black One in it. The die is good to correct your big ones and generate some resources. As a pure support, there are better ones out there like C-3PO and R2-D2. Old things apparently just work better than new...

BLACK ONE (3/5)
Solid and cheap vehicle with, pun intended, just black sides, four of them being damage based. As a one-off it could find his way into some vehicle decks, but with X-Wings and the crazy good Resistance Crait Speeder as competitors, Black One is in a tough spot. 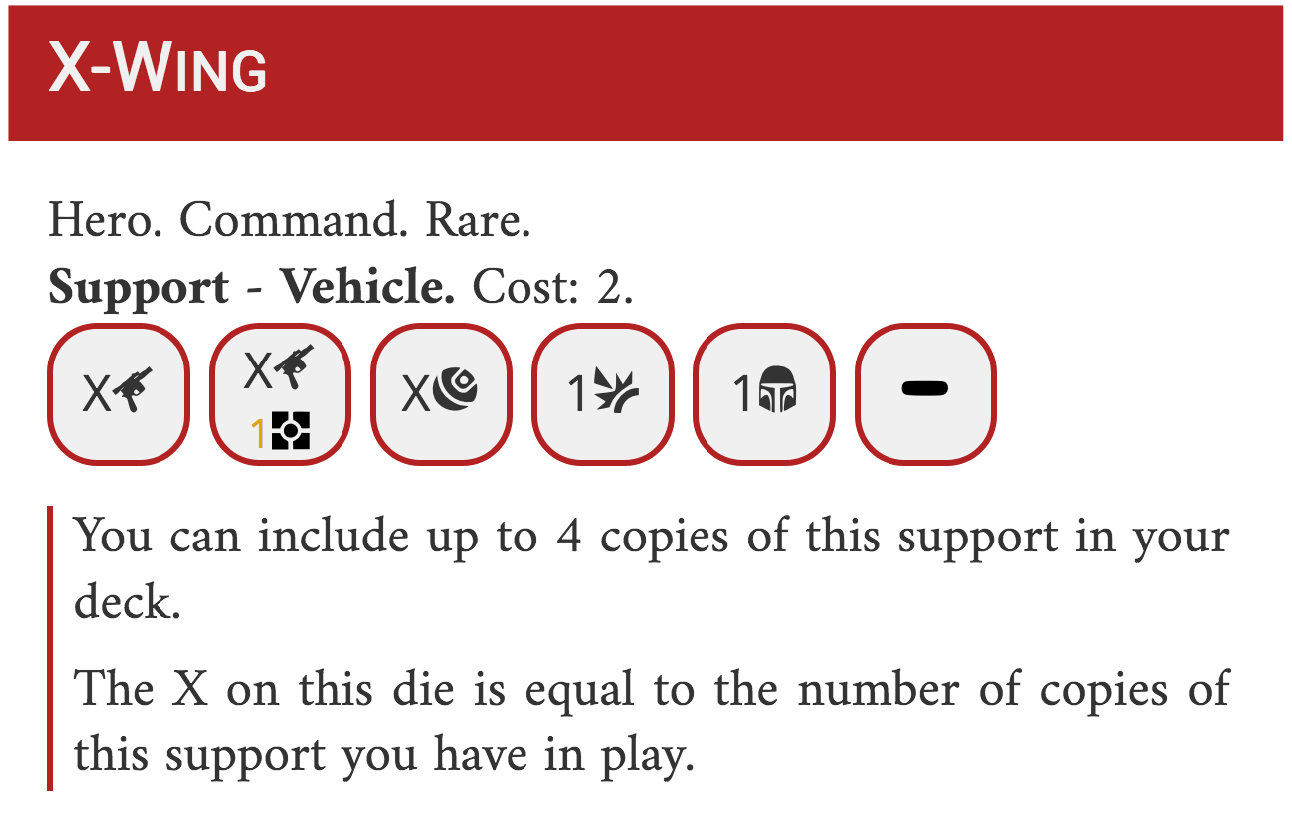 X-WING (4/5)
The iconic rebel interceptor is finally being implemented into Destiny. To oppose the TIE Fighter, you may include 4 in your deck as well. And man, that is a good die. Just one on the table isn't that big of a deal, but if you find yourself playing 2 or more, you are well prepared for the fight. The price-performance increases with every X-Wing you play and goes through the roof with the fourth one.
5. RED HERO UPGRADES: 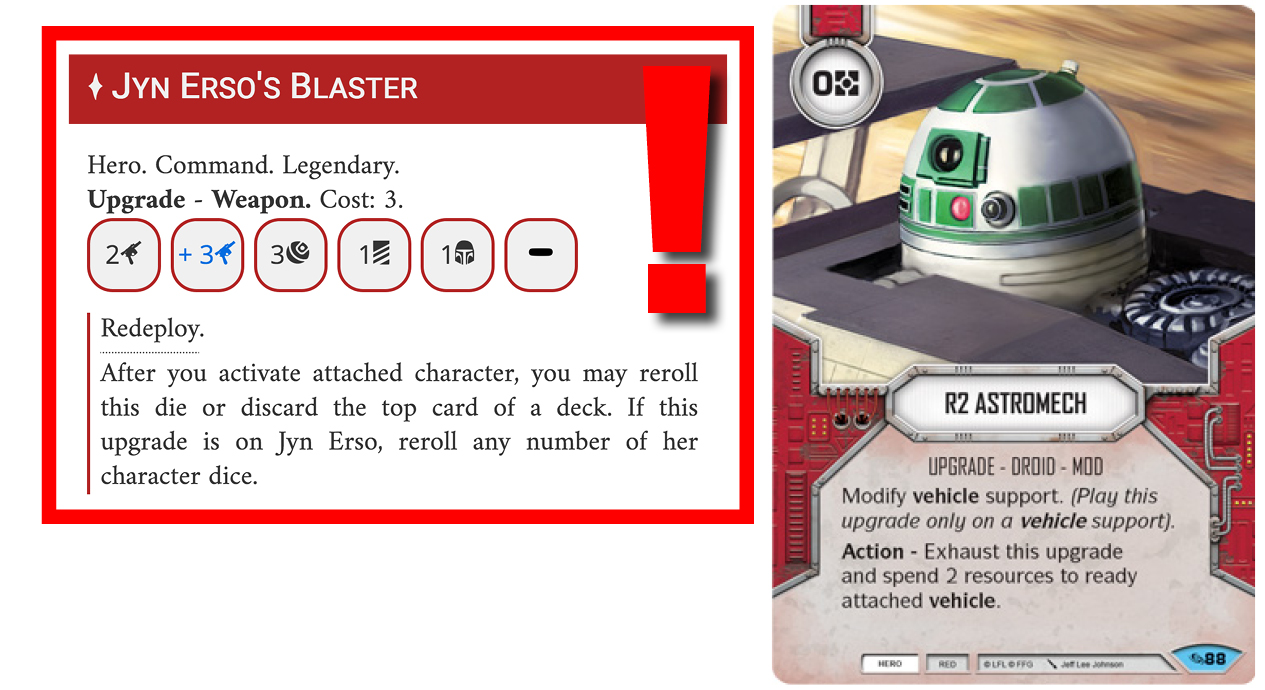 JYN ERSO'S BLASTER (4/5)
A 3 cost redeploy weapon with a free reroll or Discard. I'll take that! Put it on Jyn Erso and it becomes very nasty because you can combine the Discard effect with her ability to rearrange the top 3 cards in your opponent's deck. Also the die is good. Will probably be in every red gun deck. If they will exist.