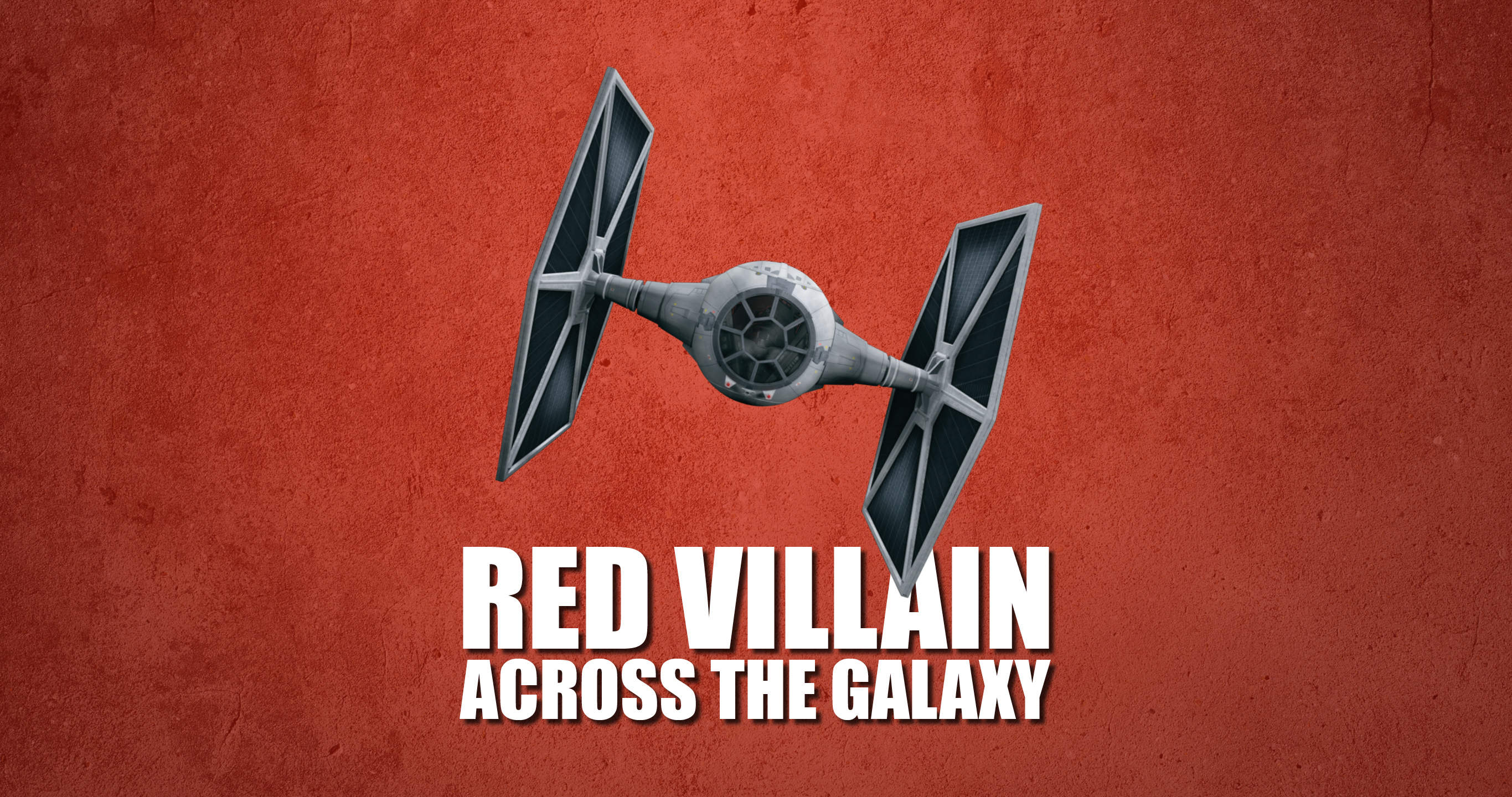 There are links to all the other parts of the set review at the end of this article!
1. RED VILLAIN CARDS:Red villains have received probably my favorite card of the set: TIE Fighter, which adds loads of new layers to the game. It's really fascinating to see where this is going! Adding 4 of a card to your deck is massive and will change quite a lot of things.

The even package looks pretty weak, but we have unfortunately gotten used to that with Red Villains ... I really hope the seventh expansion, following Across the Galaxy, will bring some love to the Empire's finest troopers.
2. RED VILLAIN CHARACTERS: 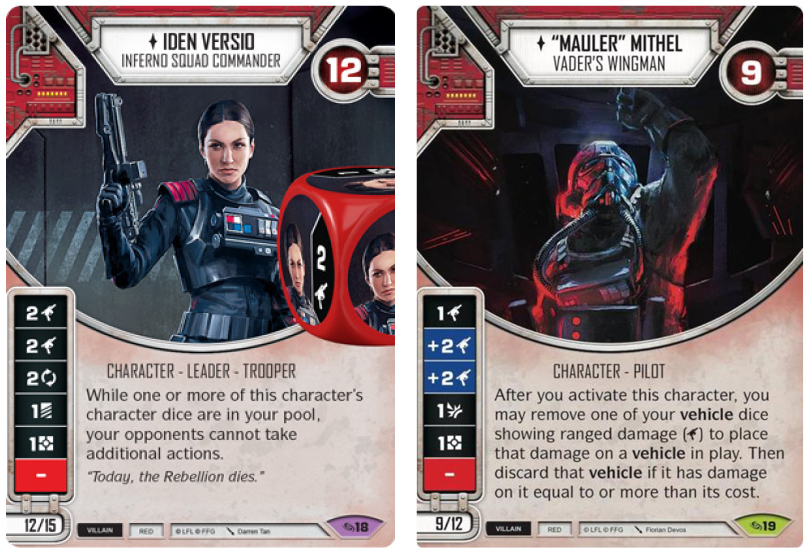 IDEN VERSIO (4/5)
The ultimate action cheat road bump. With a special ability which does not allow your opponent to take additional actions (including Ambush actions) while one or more of Iden Verso's character dice is in the pool, makes her ideal at blocking Force Speeds, Rey (Awakenings), Cad Bane, Sabine Wren, etc., she's going to make all the players, who were getting sick and tired of "non-interactivity" very VERY happy!

We've already talked at length about this subject, and while I do not agree with the generally negative sentiments, I can see how this is a delicate solution, and we might even see more upgrades that will mimick her ability in one way or the other.

With 12hp and coming in at 12/15e she looks retty decent! Two 2 Ranged damage sides and a 2 Focus is just great and the rest of her die is not too shabby either.

"MAULER" MITHEL (3/5)
"Mauler" Mithel falls in a weird design space in between the TIE Pilot and Ciena Ree and can obviously be good against vehicles allowing him with relative ease to remove 2 cost vehicles. It's difficult to say if that's the direction the meta will continue to move although the designers less than elegantly is pushing for it. I'm not superhyped by his die and feel that he's probably inferior to Ciena.

SUPER BATTLE DROID (3/5)
Unfortunately his ability only works on Droid CHARACTER dice, but at least the Super Battle Droid is pretty damn reliable. As it is right now, he can only affect other Super Battle Droids or regular Battle Droids, but always hits that 2 damage side (either +2 Ranged or 2 Indirect damage). I'd almost assume that other Villain droid characters will be introduced in future sets which could affect his usability.

WULLF YULAREN (3/5)
I hate his die sides, but think his Power Action can be very powerful. The 2 Discard side for a resource is weak and it just doesn't feel that's where you want to be with a mill character, although his two Focus sides does look enticing. Focuses are always good, and he could be a great sidekick in a 3wide Snoke/x vehicle deck essentially using his Power Action as a mini-Thrawn ability, then Snoking into a million focuses?!

Wullf Yularen of course synergises well with the new events Questioned Loyalty and Hatching a Plan, while there might be a hidden Tarkin/Wullf hand mill deck in there somewhere!?
3. RED VILLAIN EVENTS:

BROWBEAT (2/5)
So, you basically want to include this card in a deck that has characters that can put a lot of dice in the pool fast and don't mind postponing the resolution of them. This almost immediately excludes vehicle decks from the equation unless you add a tonnes of mods to them, which ... let's be honest ... you won't (and vehicle decks have better alternatives for spot removal)! I recognise how Browbeat is created to go along nicely with Iden Versio, where you want her dice to sit in the pool protecting you against action cheat, but I fear there will be too many instances where you can't play the card because you don't meet the play condition!

With such a large card pool there are just way too many alternatives for a card like this to make a splash. Maybe after rotation it'll see limited play.

COMMENCE PRIMARY IGNITION (3/5)
At a glance this card looks pretty good, but releasing how few modification dice you are likely to have at any given time on a red support limits it's usefulness. The real benefit is that you get to activate a support AND resolve the die immediately with the added benefit of not removing the die from the pool. Whether that's worth two resources is questionable, but it's obviously going to be a real killer if you can play it on a BIG'un such as Planetary Bombardment or AT-ST. If you generate an obscene amount of resources, which villain vehicle lists can do, it could end up being a great card!

DROP 'EM (2/5)
If it wasn't because Red Villains was such a terrible 'stand alone' colour, maybe the worst of them all, this card would actually be pretty good. Potentially returning TWO upgrades to the owner's hand is pretty broken and could mean a HUGE swing in boardstate, and my rating could have been (3/5) or even (4/5) to reflect this inherent power level, but in a context I don't think it'll see much play unfortunately. It is the modified version of Drop Your Weapon! which doesn't see any play either!

HATCHING A PLAN (1/5)
This card should have had Ambush! It's of course designed to go with the new Wullf control/discard thing, but it feels incredibly weak. Comparing this to a blue event like Conflicted literally makes your eyes hurt. Sure, mill is good, but really ...

IMPOSING PRESENCE (2/5)
This is another card that seems to be tailor made to go with Wullf Yularen, and although I hate play restrictions that depend too much on your opponent your deck could be made to take advantage of it. It's obviously an amazing card if you can discard all cards from an opponent's hand, but that's easier said than done. I do think there are much better mitigation cards around.

IN TANDEM (4/5)
TIE Fighters are going to be a thing - for sure! And Tandem is going to be a killer card together with them. Paying 1 Resource to flip all your TIE Fighter dice to sides of your choices can be pretty crazy! It's currently a worthless card outside of the TIE Fighters, so its rating should be lower in a vacuum, but it's absolutely designed for them and is pretty brutal.

QUESTIONED LOYALTY (3/5)
Wullf Yularen will love this card, but as it is right now not a lot of characters can consistently benefit from it. The fact that you need to KNOW the card you want to discard is pretty limiting and requires access to hand knowledge before being useful at all, which means either Wullf, Thrawn (who doesn't have a Discard side), Grand Moff/Jedi Temple combo or Friends in Low Places.

REACH THE STARS (2/5)
This is essentially a slightly improved version of Take Flight! While Take Flight is free, Reach the Stars cost one resource, and although it will potentially allow you to reroll up to 4 dice it just doesn't feel worth it. In a vehicle deck maybe, but action cheat doesn't seem to be a design space which has struck any cord in support based decks before, so why now? It seems as if Tactical Mastery and Focus sides can do the same job and even offer a bit more flexibility?!
4. RED VILLAIN SUPPORT: 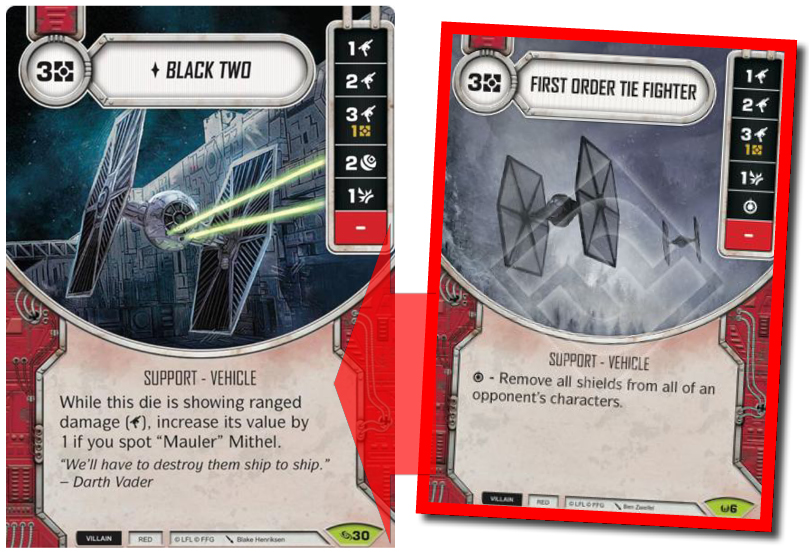 BLACK TWO (3/5)
Black Two does not look particularly impressive compared to the 'old' First Order TIE Fighter, unless you add "Mauler" Mithel to the character line-up in which case it's a pretty hard hitting piece of machinery. It does have 4 damage sides though and we have already learned in the Way of the Force meta not to underestimate the power of Indirect damage. When played with "Mauler" Mithel the rating is obviously higher, but outside of that combination it appears mundane and disappointing at best.

TIE FIGHTER (5/5)
The TIE Fighters are absolute BEASTS! Sure, they are not the hardest hitting vehicles around, but you get to include F O U R of them!! AND you get to search your deck for the another copy when you play one AND they have Ambush, and in the right decks you have a real shot at playing all of them round 1 or round 2. You have 55% chance of drawing into at least one TIE Fighter before mulligan and they represent a lot of damage spread on a lot of dice which leaves them less susceptible to removal. I'm a pretty big fan!

UMBARAN HOVER TANK (3/5)
There's starting to get real competition for the spots of 3cost supports. And the Umbaran Hover Tank can go toe-to-toe with at least the old Fang Fighter, but is probably still going to be edged out by the ARC-170. The Special seems overcosted as a payside, but dependent on how big a thing the new 'mod' design space is going to be, it might be worth it.

VIGILANCE (2/5)
Of the various out-of-turn supports that are being presented in Across the Galaxy this one does look somewhat weak. "Turning dice" is still not the prevalent way of affecting dice in the pool, but once it gets more traction so will Vigilance.
5. RED VILLAIN UPGRADES: 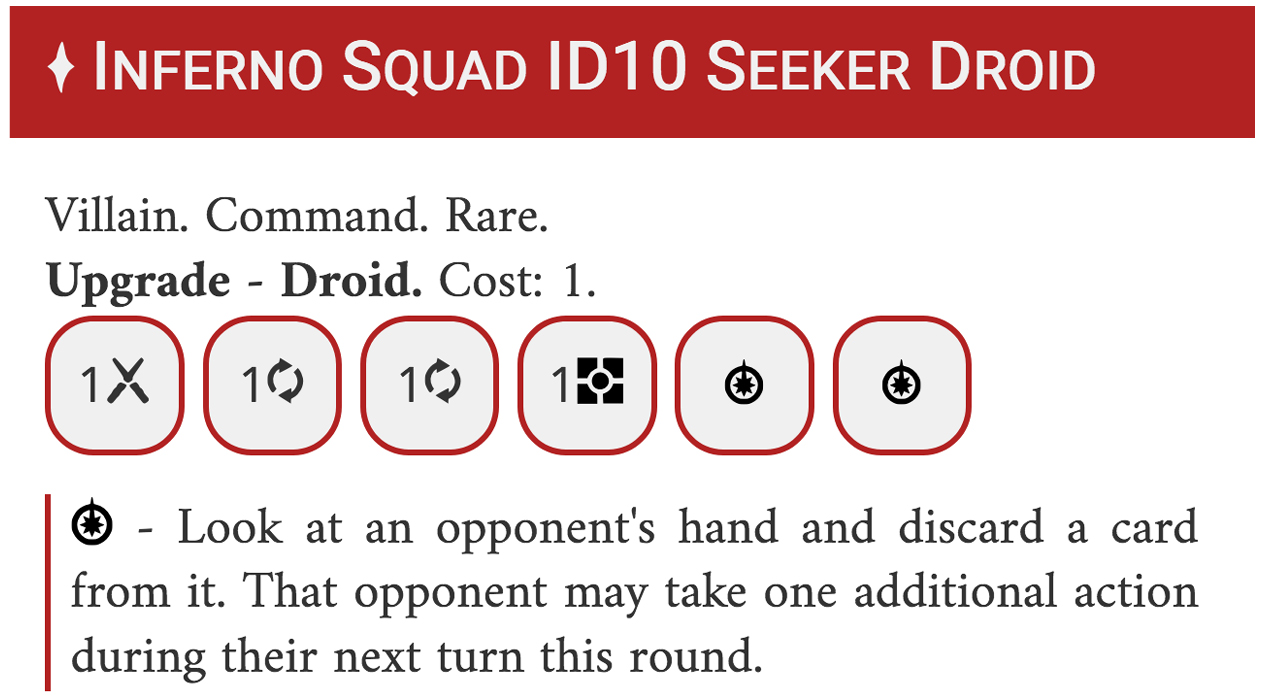