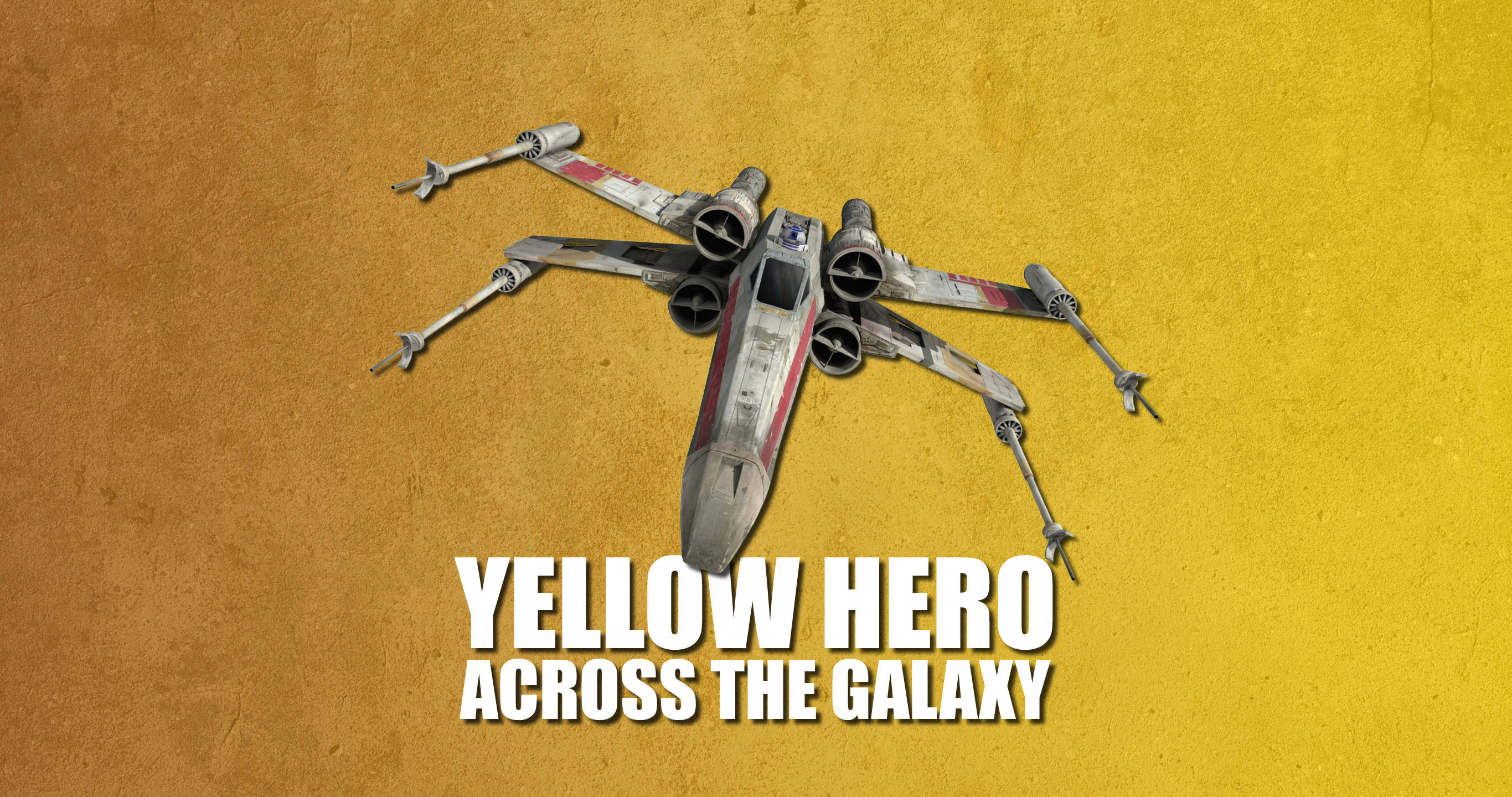 There are links to all the other parts of the set review at the end of this article!
1. YELLOW HERO CARDS:After gaining much attention in mill decks (especially Millionaires) and having some of the best tech cards in the game (Easy Pickings, Hyperspace Jump, Second Chance...) at least the first aspect seems not to receive more attention in this set.

This time the focus seems to evolve around resources, speed and surprise effects.
2. YELLOW HERO CHARACTERS: 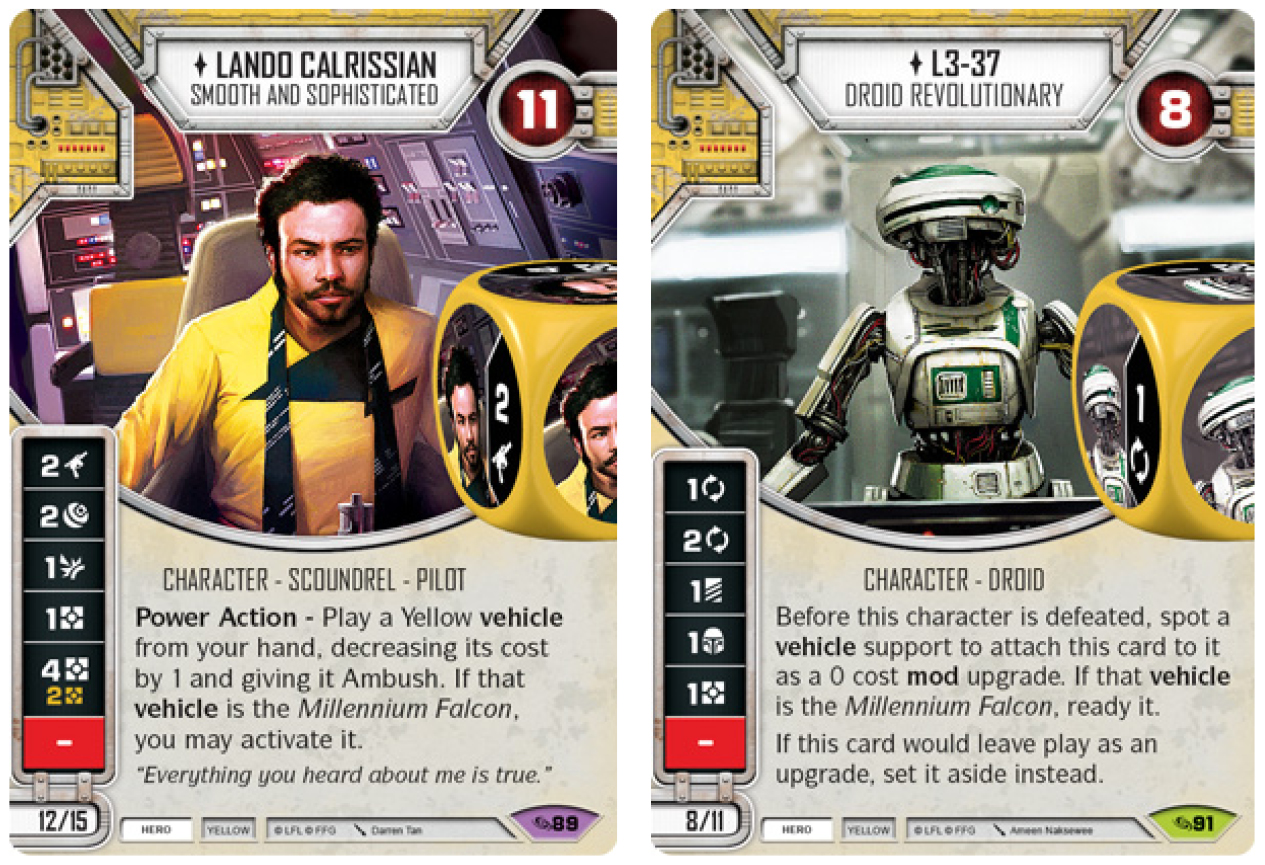 LANDO CLARISSIAN (3/5)
The only problem you could get with this character is his point cost. His Power Action is great for vehicle decks, having a free Weapon's Factory Alpha every round sounds pretty strong. And his dice offer more resources and decent damage sides. Combine him with red to include Tech Team and Rally Aid and your ramp machine should be going through the roof. IF Yoda gets some nerf love, he could become the new steam engine for hero vehicle decks. Something you could try out is:
LEIA ORGANA (4/5)
The special on her die is ÜBER good. Usually it deals 4+ damage to the opponents team. Combine her with Yoda and she will be enabled to use it constantly – well, as long as the little green one is alive. BUT similar to Hondo's Special, your opponent can chose to pay you off and suddenly the awesome special turns into a Disrupt/Resource.

With probably more villain decks in the meta this problem will become obsolete because disrupting and getting 2 resources with one die is straight up bonkers. Having two black Melee sides as well helps if you want to play some of those juicy blue weapons (Obi Saber, Dagger of Mortis and so on).

With her ability to put up to 5 villain cards in your deck you gain a huge amount of surprise factor. Want a Deja Vu to play another Easy Pickings? Or crush your opponents options with a Buy Out if he ends up giving you all his money? Calling out for a Backup Muscle could be a nice finisher too. Bait and Switch into a surprise Special! You get the point – there are some very interesting options coming up. Yoda/Hondo was well performing deck – this looks straight up better at the first glimpse. Time will tell if 21 Health is enough in the growing health pool meta. 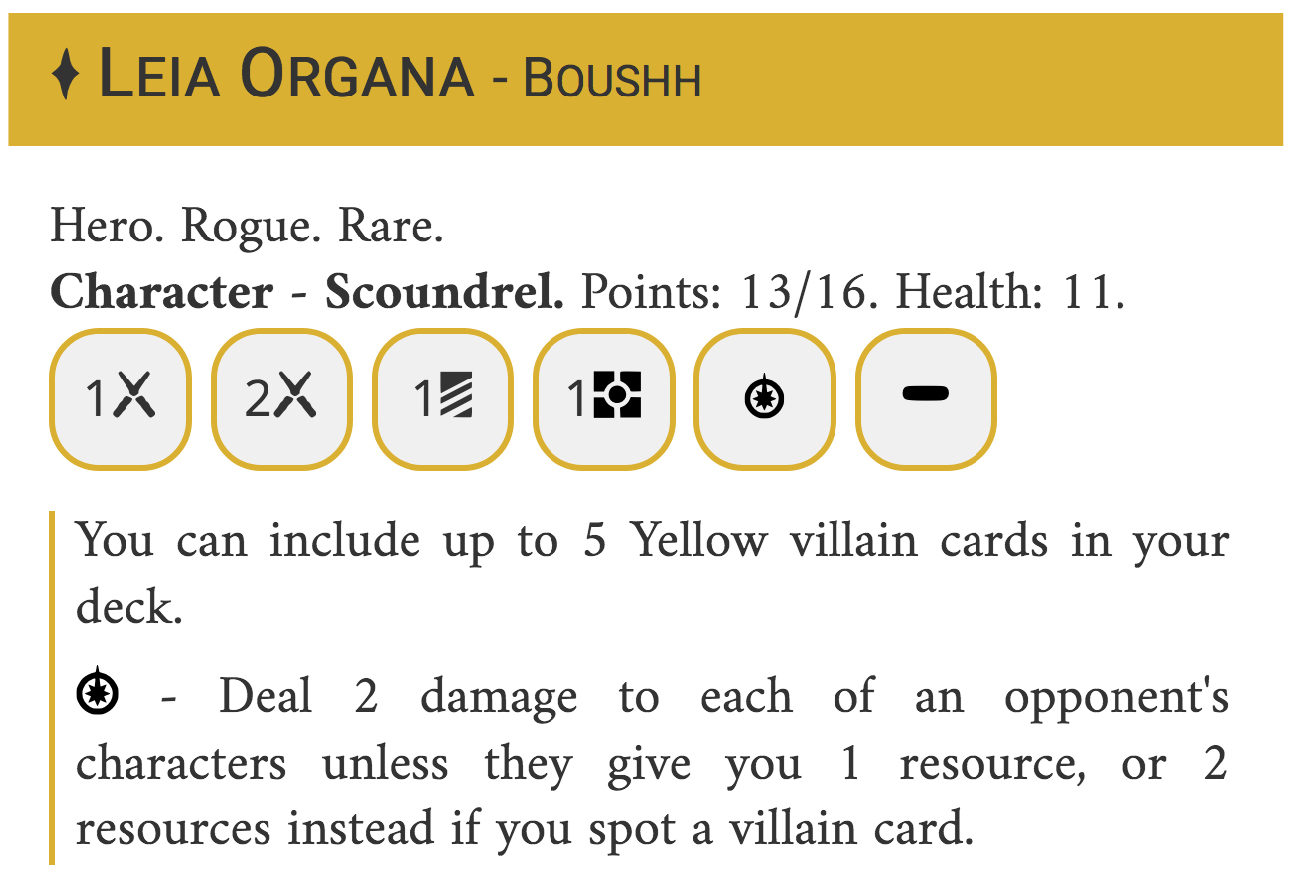 L3-37 (3/5)
L3-37 is an odd character. The dice sides are fine, but it's the ability that makes it stand out. Keeping the die on the table even after L3-37 is defeated is pretty awesome. And suddenly the 2 Focus side looks pretty solid! All these cards centered around the Millenium Falcon. FFG really wants to see you play that iconic vehicle. L3-37 could take Rose's place in hero vehicle decks.
3. YELLOW HERO EVENTS:

A GOOD INVESTMENT (1/5)
Its a good card if you can combine it with an action cheat and have 3 Resources ready. But that will occur is such rare times, that other cards like Truce or Well Connected will be chosen over this.

AID FROM ABOVE (1/5)
Looks interesting at the first glimpse, but the 2 cost just hinders it from being a good card. Your opponent will usually chose 2 actions and draw 2 cards. Drawing two cards is not worth 2 resources in my understanding. It's tricky. Maybe there is someone who can find a use for it, I just do not see it, because a good player will always decide the worst for yourself.

DARING GAMBIT (3/5)
This card can be compared with no mercy. Surprise damage is always good and having 6+ dice in the pool late game is not that rare. Lets say you got 3 cheap dice, 2 damage dealing die and 2 character dice in your pool. Reroll all of them, find a 2 damage side and deal 8 damage without interaction possibility. It is a late game card for sure, but if you can pull it off – it just wrecks. The thing is, you do not have to use it on damage sides, generating a shitload of resources in round 2 or milling your opponents whole hand is totally worth the cost.

DROP IN (4/5)
Great card for a fast deck. Similar to Hit and Run which allows great plays in decks with Rex's Blaster or All In. Will probably be seen in Yoda/Hondo or that mentioned Yoda/Leia3 deck. It's made for the eRex/Clone Trooper/Maz deck to have that crazy action cheat available all night long (e.g. Drop In OR Hit & Run into Rex with his Blaster activation into Maz into Maz ability into resolve).

HIJACK (4/5)
If big cost vehicles stay in the game like they are right now (AT-ST, Speeder Tank, Hailfire Droid Tank...), it will be seen everywhere. Sadly you can't take over Vaders Fist or a Planetary Bombardment. But even if you steal a smaller vehicle like the Arc or a Fang Fighter you remove a potential damage die and get a die for one round. That is still worth 2 resources. Remember to wait for his rerolls, so the Hijack becomes a much more hurting experience for your opponent. As mentioned, this card is hugely meta dependent. Currently it seems like vehicles will stay in the game after we all got over the Vader Hype.

KARABAST (3/5)
Cards like this have see play before (Draw Attention, Impersonate), especially in decks that rely on one character (Sabine). This is basically a Draw Attention with a requirement, which is easy to achieve: You usually move the damage when your opponent is showing lethal. And note that it does NOT ignore shields. So I would prefer this one over Draw Attention. Or play both and let your Gunslinger survive all day long.

LEVERAGE (2/5)
To use this removal card you have to have your dice out and them showing a specific side. Harder to set up than Loth Cat and Mouse or Negotiate and less impactful than Guard. And for one cost. There are better removal cards in that range (Easy Pickings, Electroshock, Risky Move...). Will probably see play in mono yellow decks after rotation hits.

RELUCTANCE (3/5)
Throwing a wrench in your opponents plan is a thing you want to do. Very often there are situations where you want to do that one thing before you have to play your Hyperspace Jump. Or you could use it to slow down your opponent and play two removal cards while he can just resolve one of his dice. A very interesting card and its free.

SLICE AND DICE (2/5)
Another interesting and tricky card. It can be used for different things: You could just want to do some unblockable damage like you would with Unyielding or surpass a situation where your opponents forces you to overkill a character. Another mechanic you can use out of this card is to resolve blue sides without having black ones like you can with Legacies (#129). But is all of that worth 1 resource? It will have his place in some decks, but it has to be melee, include yellow and hero. Not seen much of that outside of Zeb/Yoda or Zeb/Rey1. Maybe the new Leia can help.

THROUGH THE PASS (3/5)
A late game card that copies Ahsoka Tanos ability for one more resource. It fits in both, aggro decks and vehicle mod decks. Chose your biggest target and use it two times. A Yoda with 1-2 Force Powers or Weapons – get some refund with his special and deal double the damage. Or a Millenium Falcon reactivation for just 2 resources can seal the deal of a game. I would give a higher rating if the basic cost would be zero, because its hard to obtain 3+ resources in most cases.
4. YELLOW HERO SUPPORT: 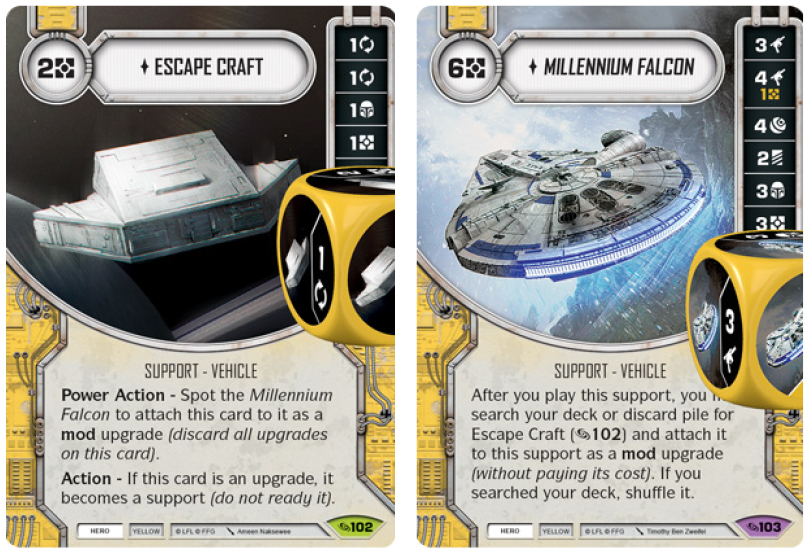 ESCAPE CRAFT (1/5)
That card is designed to make the Millenium Falcon worth its cost. Having it for free is great, but paying 2 resources on a support die is tricky. Sure, you could focus or reroll it to the two resources, but why the effort if you could invest that in damage or straight up better supports like R2-D2 or C-3PO.

MILLENIUM FALCON (2/5)
The new Millenium Falcon is not really impressive, even with some phantasmagoric die sides. Finding those 6 resources is prohibitive for the card unless a hero version of Delve finds its way into the set. IF you can set it up with Lando/Tech Team/Rally Aid it will just cost 2 and therefore be probably worth it. Out of a 6 cost you want more damage than 4 for a resource. Compare it to the old old awakenings AT-ST or the glorious Planetary Bombardment. Sure its die looks better, but the possible damage output per round is just too low.

ON THE MARK (4/5)
This can have a huge impact on one of your mid or late game turns. Being able to change ALL your indirect dice to direct damage sides improves the most of the newer vehicle by a ton! Need focus down a special character fast? Here is your toy to do it! I assume it will see play mainly in vehicle decks, because they have the sides to benefit most from it. For a cost of 0, totally worth it.
5. YELLOW HERO UPGRADES: 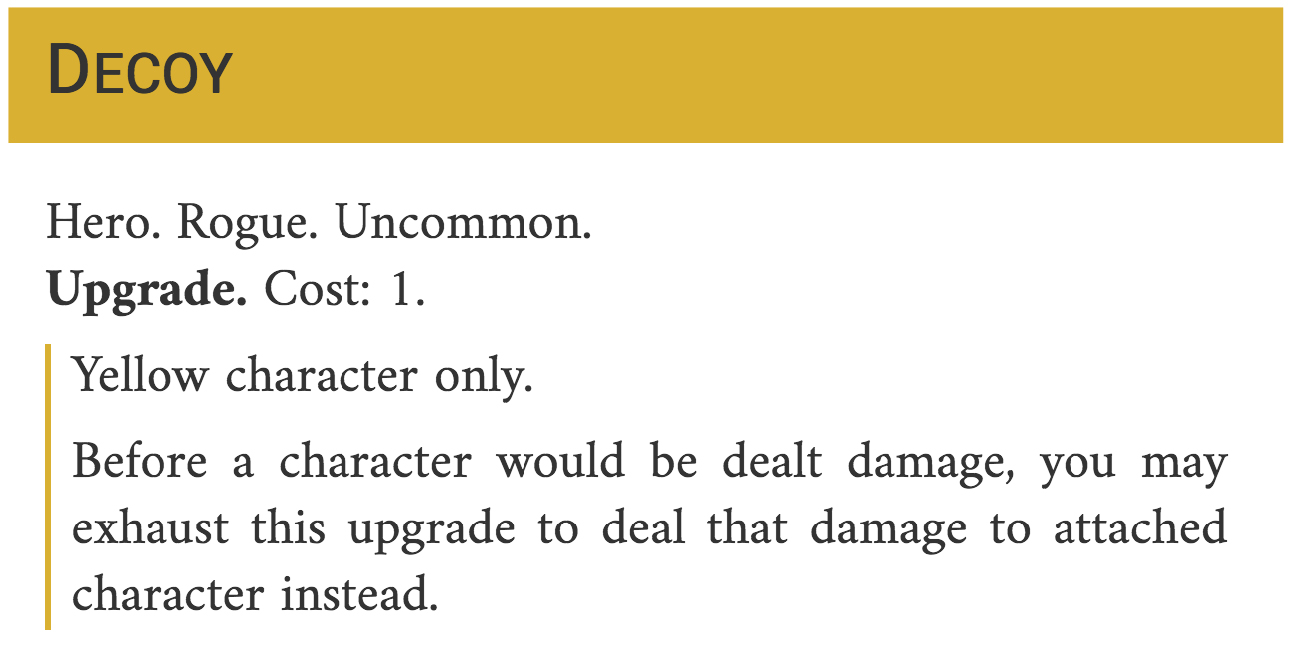 DECOY (3/5)
Basically a more flexible Guardian and therefore a better Bodyguard or Personal Escort to protect your main character or split up the damage. Both of those did not see play, this one on the other hand could see play because you can still use it after activation. Most of the time it is straight up better to just remove the die with a 1 or 0 cost removal, but being able to use it multiple times makes this card very useful. Play it early to gain the most benefit.

ENERGY PIKE (1/5)
Compare this card with some of the two cost lightsabers (Ancient, Shotos, Ezras Lightsaber...) and it is just garbage. If you want to play melee, you go blue upgrades and therefore this card will probably not see play.