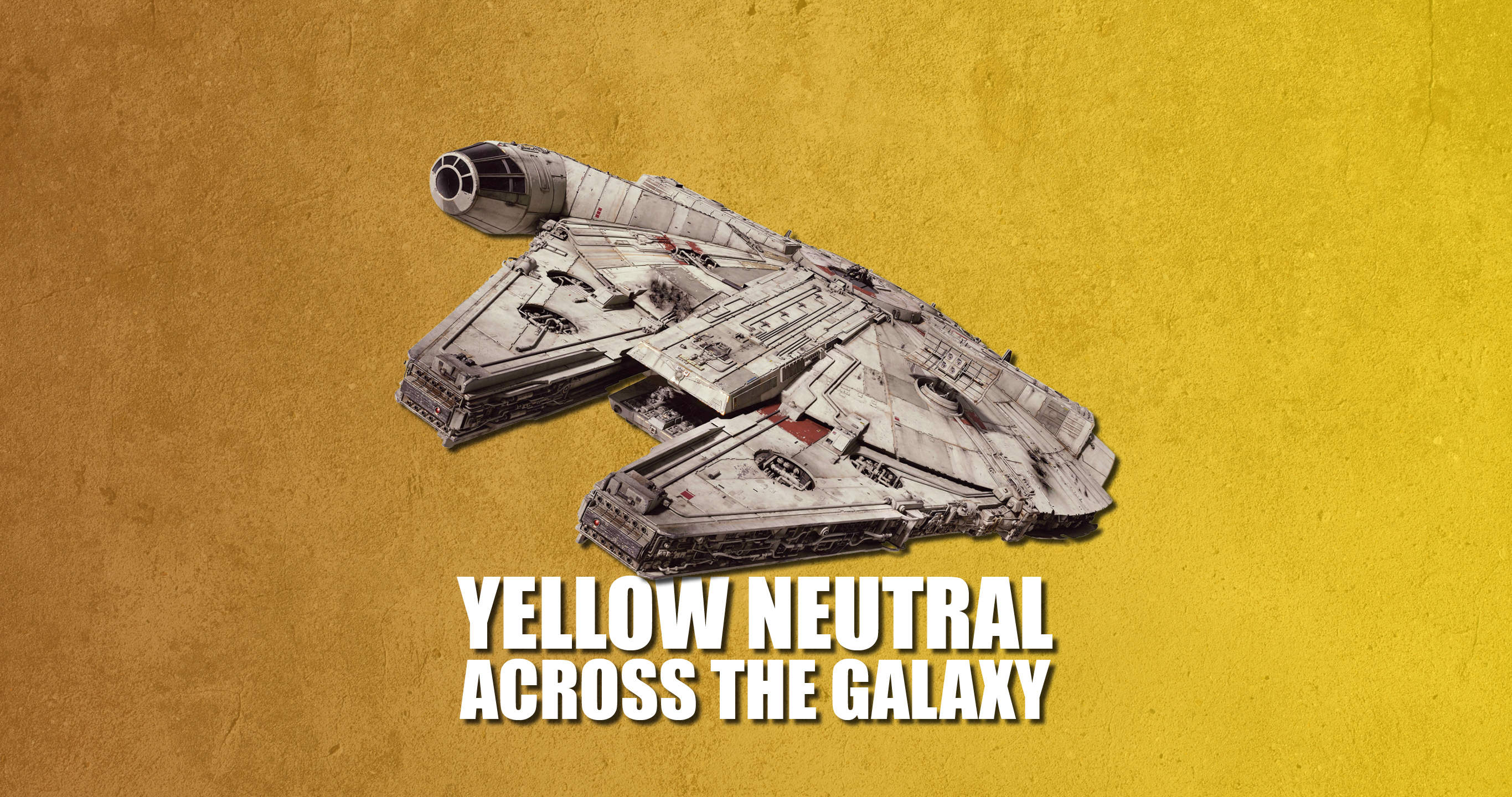 There are links to all the other parts of the set review at the end of this article!
1. YELLOW NEUTRAL CARDS:Yellow Neutral is looking above average compared to so other color/alignments this set, especially with the FFG committing to neutral characters. Yellow seems to be the go to place for neutral, and given the way the color scheme works in this game I only see that continuing, so be on the lookout for cards like Han Solo to remain relevant as new sets begin to come out.

There are some very strong cards here in improvised defense and indifferent, and I suspect Han Solo will be the one to bring those into action, perhaps along with Hondo.

As a final note the most expensive card of all time is printed here as well in Double Down. Sure the card itself won't be much, but if you want to be able to run 3 of any card at any time, you might just have to get another card binder. Fortunately I don't think it will be busted, but only time will tell.
2. YELLOW NEUTRAL CHARACTERS: 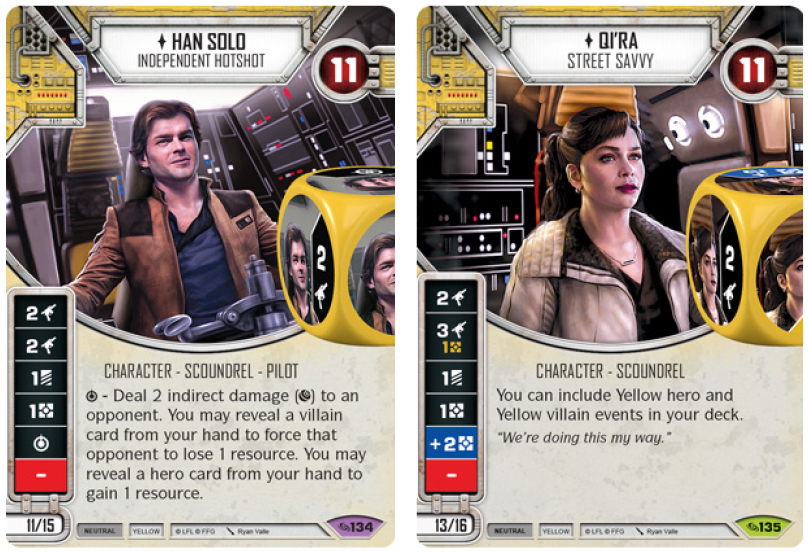 HAN SOLO (4/5)
I like this guy even if I don’t hear too many others agreeing. He has got 11 health and three 2 damage sides for just 15 points. Not to mention he is going to enable you to run some of the new cards that are limited to working with neutral only characters. For what it’s worth I think the Hero effect’s special is better, as gaining a resource to use proactively is stronger than denying a resource (that might not even be there by the time you resolve this).

QI'RA (2/5)
First off, I’m not quite sure how she isn’t just a villain, but I guess her effect is kind of neat. I suspect that Villains playing Hero cards will be stronger than the opposite. However, I think her dice are kind of trash for a 16 point elite character, that pay side ranged has a long track record of unplayability and that blue resource side will be a blank so often it won’t even be funny. Needs dragons in my opinion.
3. YELLOW NEUTRAL EVENTS:

ACROSS THE GALAXY (2/5)
Here is our set named card of the expansion. It doesn’t seem to be very good though, unless it becomes a tech piece sometime in the future. I’m not sure we will reach that point for a while, if ever.

CASH OUT (1/5)
The only real use I see for Cash Out is as an event that lets you play around disrupt effects, but honestly I would rather find other ways to deal with that problem that lose a deck spot to run this incredibly situational card.

DISMANTLE (0/5)
Killing supports is cool, but having to pay their cost is not, and it’s also super negative tempo if you do it. It’s kind of odd that it won’t let you hit supports with mods, as that’s the only time it will actually create enough value to justify its use. 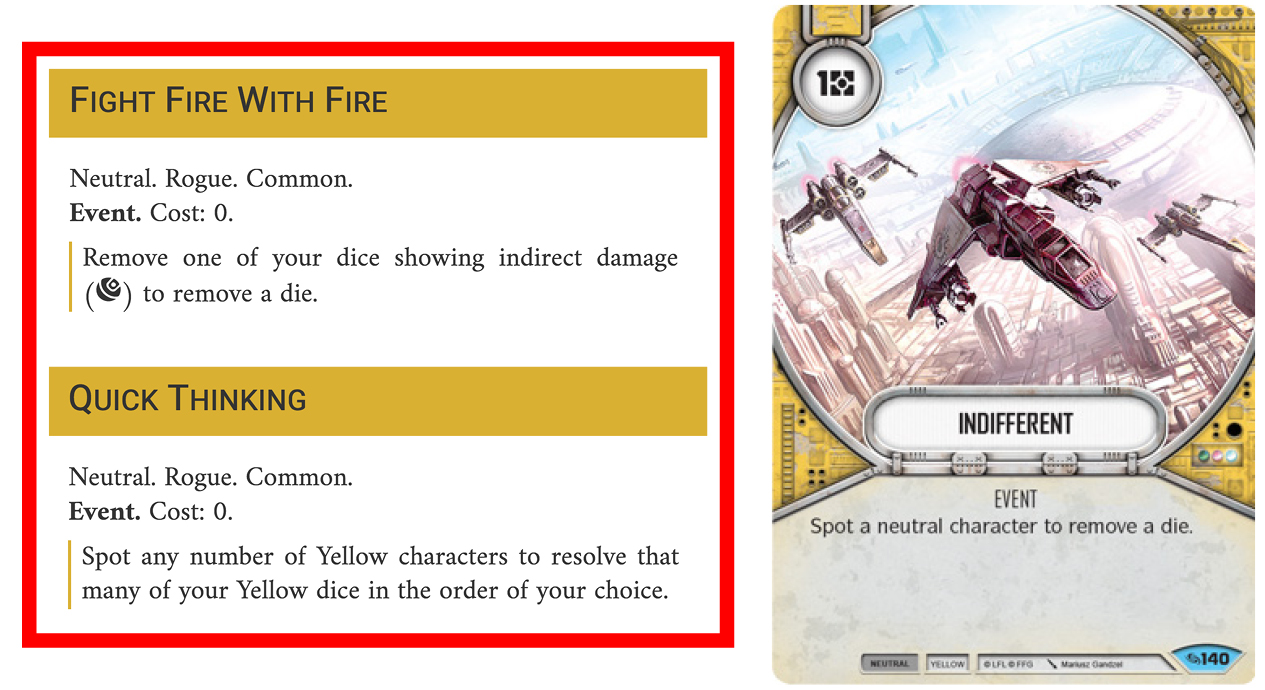 FIGHT FIRE WITH FIRE (2/5)
This is probably too hard to manage, and it’s also worse than villain’s He Doesn’t Like You. If we can find a deck with a ton of expendable indirect damage dice it will be fine, but I don’t think that deck will exist.

INDIFFERENT (5/5)
If you have a neutral character this is the best 1 for 1 removal card in the game. Tier 1 if you ask me.

QUICK THINKING (1/5)
Quick thinking honestly doesn't look as if it will see a lot of play. Spotting more than 2 yellow characters seem unlikely. I think Impulsive has almost the same use, but is much more versatile.

SHOCK TACTIC (1/5)
I feel like they forgot to add an “S” at the end of this card, but I am not an English major so what do I know? It seems good against… Tie Fighters and X-Wings? Maybe also Battle Droids too. Seems a bit narrow, but that effect is strong if you can get it to work in enough games. Be careful though if they see it once they’ll play around it from there on out.
4. YELLOW NEUTRAL PLOT:

DOUBLE DOWN (2/5)
I think the added consistency of having two sets of three of’s is powerful, but I’m not convinced it is worth losing 2 character points over. Prove me wrong deck builders!
5. YELLOW NEUTRAL SUPPORT: 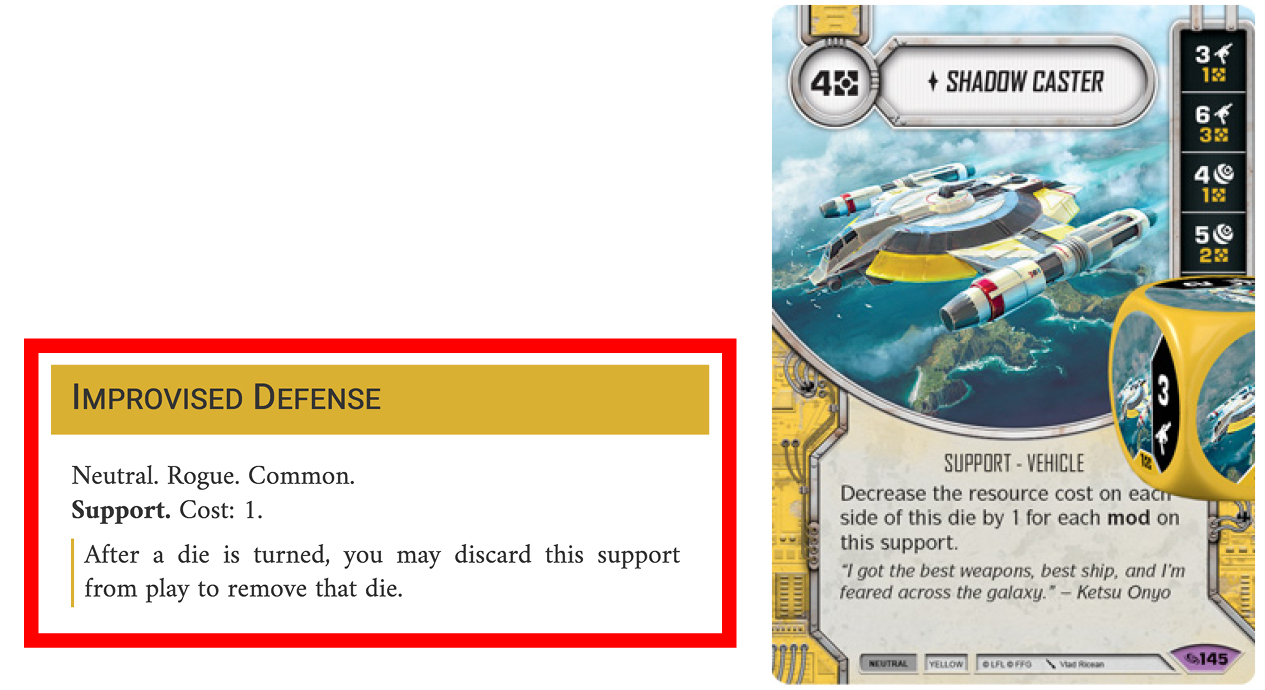 IMPROVISED DEFENSE (5/5)
Dice fixing was a defining feature of tier one decks last meta, and I don’t see that changing. I expect this to rarely be dead in the upcoming meta, so I’m pretty high on this card.

SHADOWCASTER (2/5)
This card has monster sides but it’s so expensive to play out and then upgrade to the point where you can actually reliably use those sides that you paid so much for. I think at that investment you could be doing better things to be honest.
6. YELLOW NEUTRAL UPGRADES: 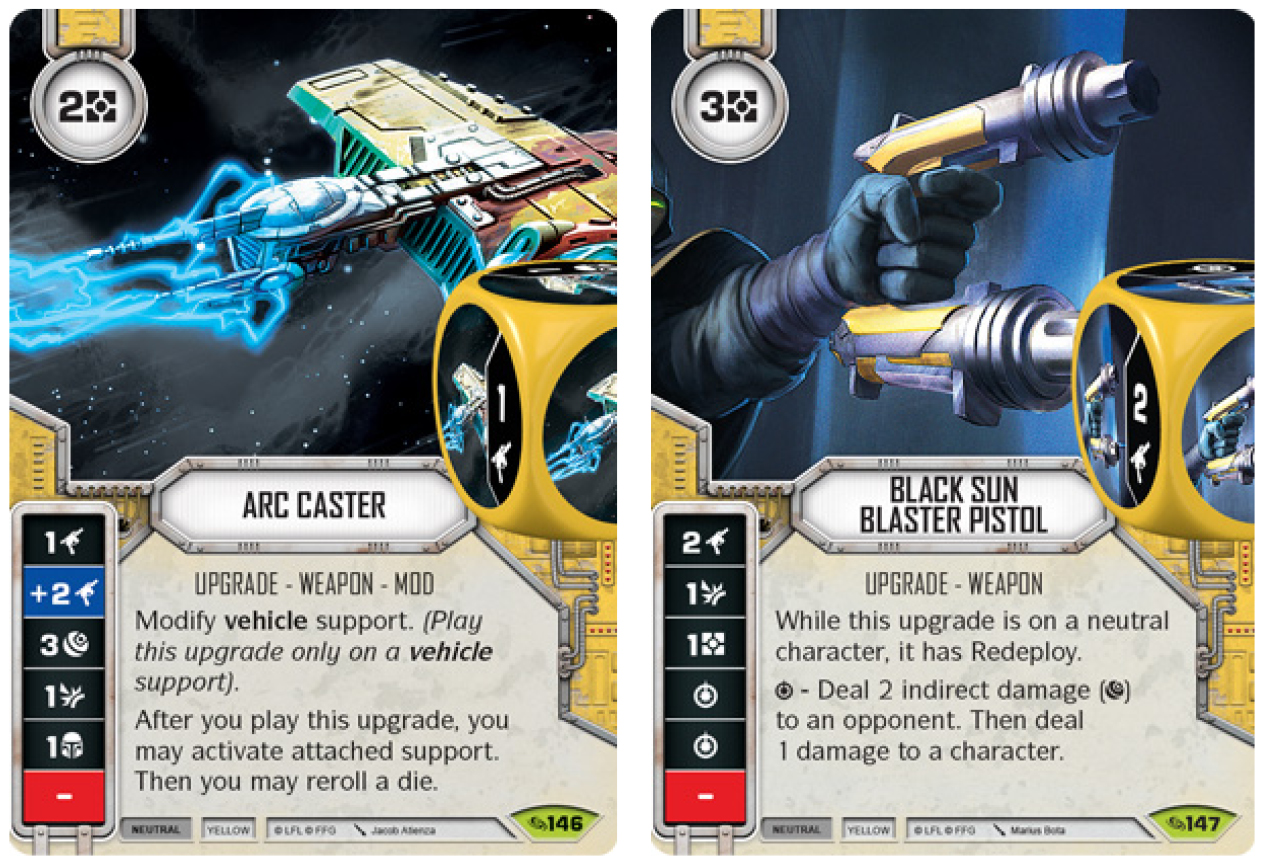 ARC CASTER (3/5)
I’m not too sure how good mods are going to be in this upcoming meta, so I guess the best thing to do for now is to compare them to other supports, but acknowledge that playing them is more situational. The sides for this card seem to be only okay for the cost. The free reroll is neat, kind of like a onetime Han2 effect, but it is only the one time. I guess I’ll call it average for now.

BLACK SUN BLASTER PISTOL (2/5)
Eh, I guess the sides on this are okay, but it really needs the redeploy to be worthwhile and requiring a neutral character to do that is pretty limiting. I think this will end up being outshone by the 2 cost blasters and even some of the other 3 cost blasters, at least until rotation. 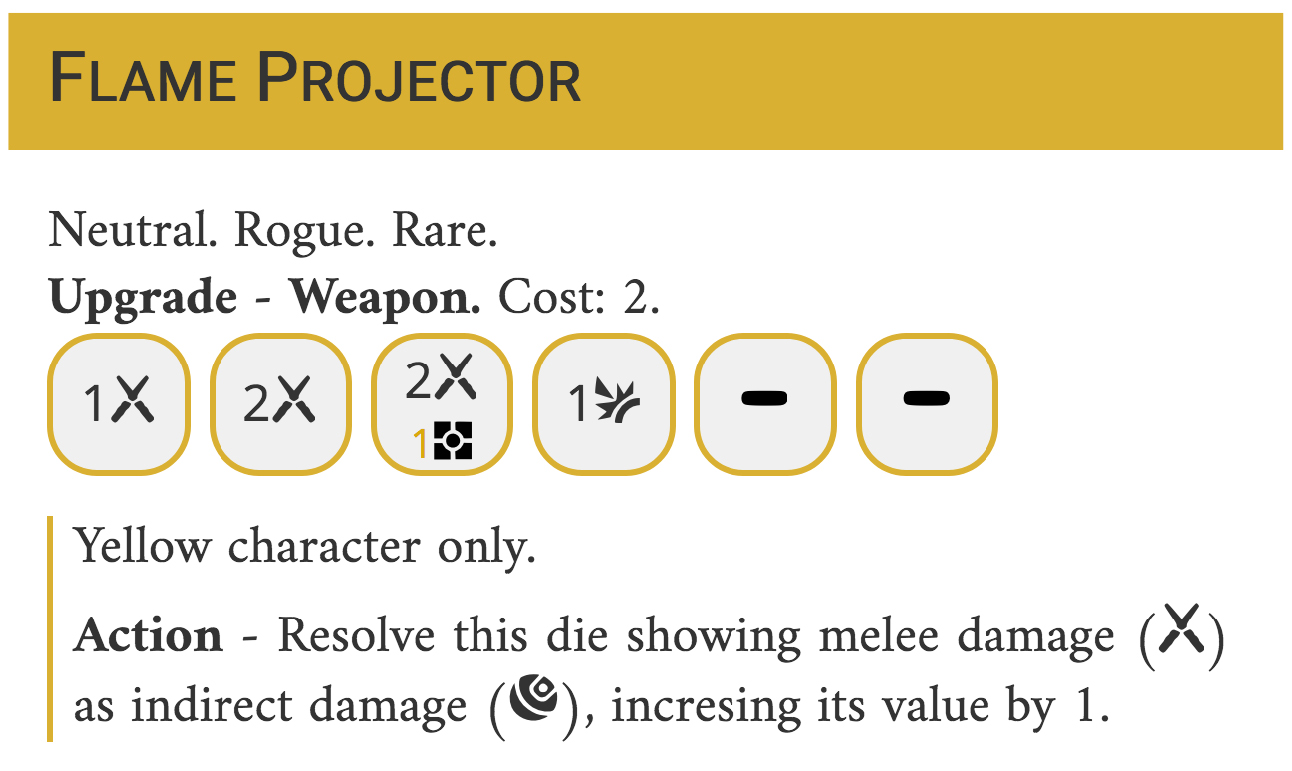