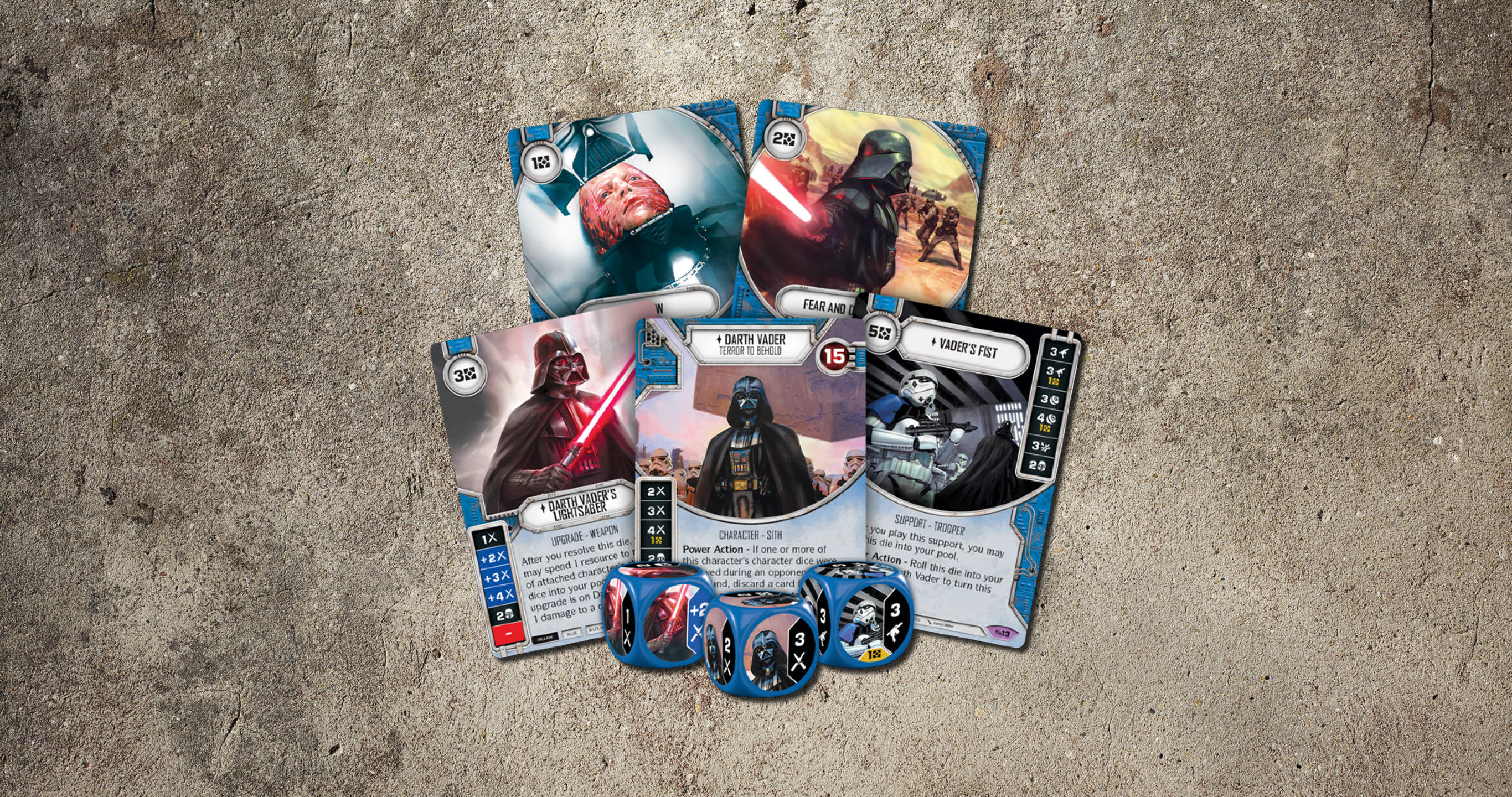 1. DARTH VADER ...
Darth Vader is the reason I love Star Wars! I'm not a FAAAAAN of Star Wars per se, but when I was a kid and first saw The Empire Strikes Back (I think I saw it the first time in the beginning of the 1980's), I instantaneously knew that Darth Vader had to be my father also (I'm an orphan) ... and suddenly everything made sense. 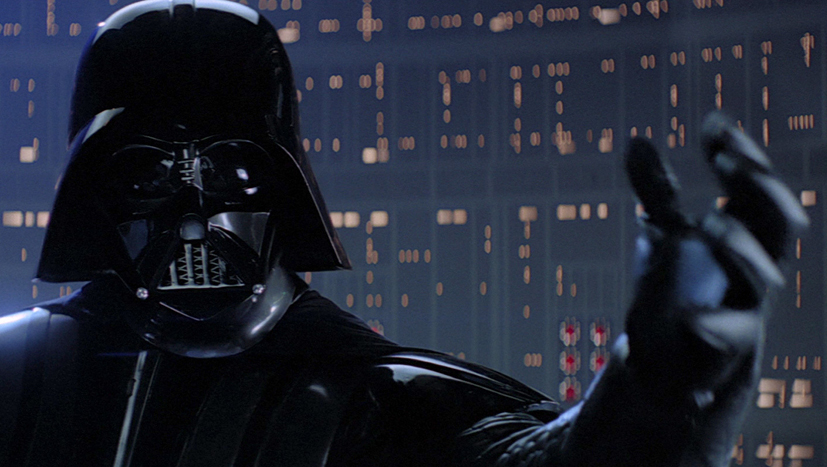 When I started playing Star Wars Destiny, I immediately had to play Vader/Raider, then Vader/Royal Guard, and although I'm not into thematic decks at all, my long lost father just kept drawing me in like a Death Star tractor beam!
We sort of already had the Darth Vader card spoiled on the Reddit Subform, and now we have two things confirmed:
2. WE KNEW IT - NOW WE KNOW!
We knew the power creep was real, and know we know it. The core of the game has simply changed and the algorithm that has defined characters has changed. DARTH VADER - TERROR TO BEHOLD was the last piece of the puzzle that we needed for the evidence to be ... well .. evident. 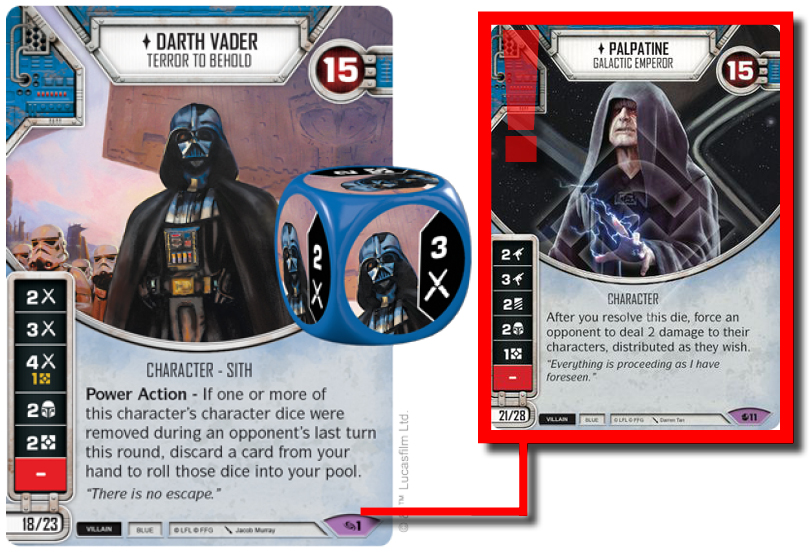 The easiest comparison to Darth Vader when talking "power level" is obviously the Galactic Emperor Palpatine because of the unparalleled health, 15hp, and the inherently powerful die sides. While Palpatine's after ability is one of the strongest in the game it is now eclipsed by Darth Vader's Power Action which in one swift move have all but negated the biggest weakness of Palpatine: The frailty of his dice.

Darth Vader's ability to roll any of his Character dice into the pool that had been removed in the previous turn is INSANE! As in: This is GAME CHANGING!!!!

And we still haven't talked points cost! Coming in at "just" 18/23e, which is ludicrous for a character of his statute, you can run him elite with a First Order Stormtrooper, Greedo, Bazine (or Battledroid) or even go all in and run him single die in a monoblue character team with elite Mother Talzin! 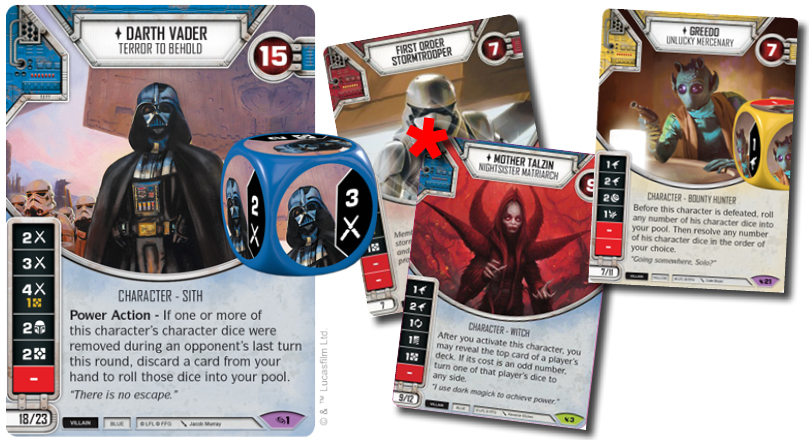 Normally, a 3dice start is pretty bad, but with Darth Vader's Power Action it is more than viable AND with cards like DARTH VADER'S LIGHTSABER and FEAR AND DEAD MEN, I'm confident in saying that we'll be seeing Vader around ... A LOT! 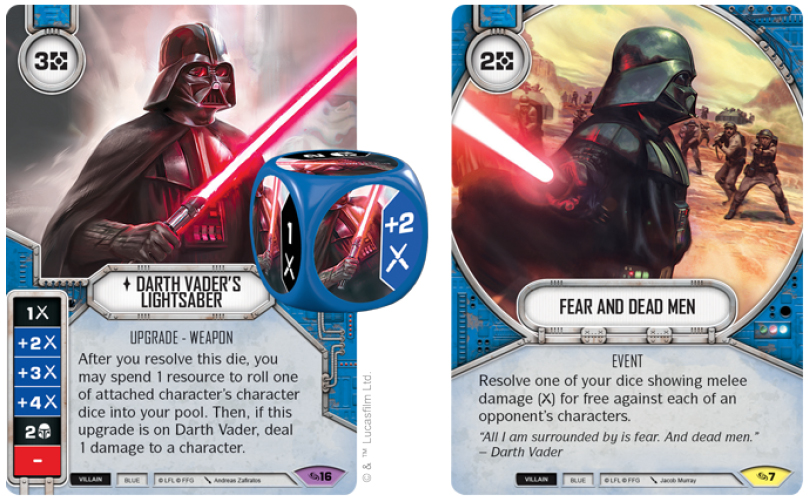 Darth Vader's Lightsaber essentially adds one extra character die for the cost of 1 resource when you resolve the Lightsaber die, while Fear and Dead Men allows Darth Vader to deal 8 Melee damage against a 2 wide character team, 12 Melee damage against 3wide and basically kill an entire army of Battle Droids or Gungans in ROUND 1. Ah, right ... and it deals an additional damage effectively, when equipped on Vader, making it a 2M/+3M/+4M/+5M/2S+1M/-.

Mind you that I am yet to use the word 'Broken'.
3. THE REST:Darth Vader's Lightsaber, when equipped on a character like Vader, is probably close to the most powerful upgrade in the game, and likely eclipsing Maul's Lightsaber. At least it doesn't have Redeploy, which then means that weapons like Dagger of Mortis and Heirloom Lightsaber still has something going for them. Normally, a weapon like Darth Vader's Lightsaber would be weak due to the three modified damage sides and the risk of having your base damage side removed, but that vulnerability is almost completely negated by Darth Vader's Power Action. The synergy here is too obvious and too ... I'm still not using the word 'Broken'. 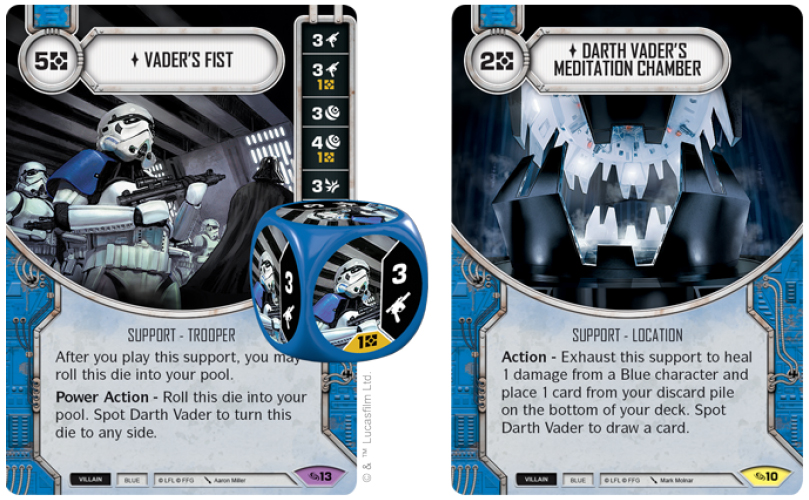 DARTH VADER'S MEDITATION CHAMBER
We saw how powerful Witch Magick was for blue villains (even if restrictive for your deck building), and we've seen the effect that Ancient Lightsaber had on the game. Although Darth Vader's Meditation Chamber might not reach those elevated echelons it still pretty good - and with Darth Vader it's just outright mad! Adding that draw mechanism is exactly what makes it AMAZING! Sure healing is good, but adding cards from your Discard pile to your deck AND drawing a card is CRAZY! It also offsets the negative effect of Darth Vader's Power Action, namely discarding a card.

VADER'S FIST
Pretty expensive support (Although we don't know the value of the 6th die side, which according to the spoiler article should be a Shield side) and there seems to be a lot of paysides, but obviously it had to have a crazy Power Action which just had to be a bit crazier spotting Vader. I guess, if you can find the resources to get it into play early it will make an impact, and it has a CRAZY damage curve! 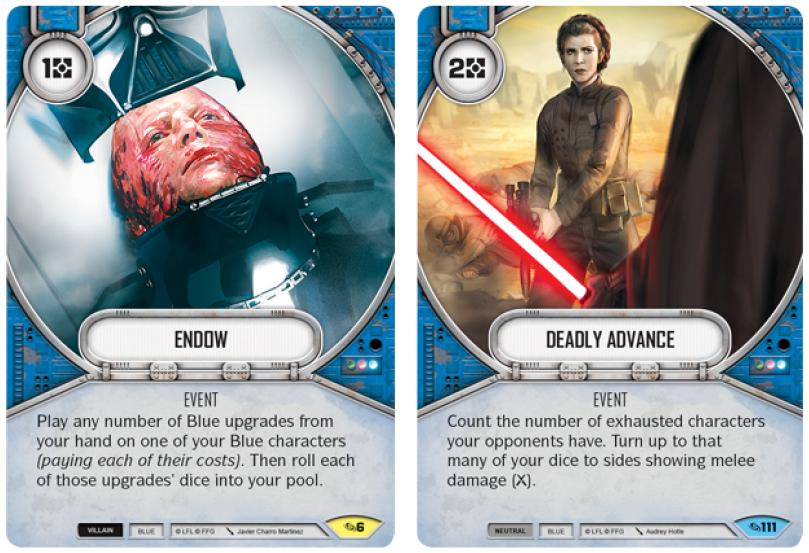 ENDOW
This is an interesting event that works well with the draw mechanism of Darth Vader's Meditation Chamber. You already activated Darth Vader, then draw into new cards, i.e. Boundless Ambition and are now able to play upgrades and still roll them into the pool. Claiming prematurely against a deck rocking a card like this might be dangerous - potentially lethal!

DEADLY ADVANCE
Preparing for life after Force Speed might see blue character teams slow down and Deadly Advance might just be what PloKoon/Padawans, Rey/x, etc. will need to strike terror in their opponents. It's a bit expensive, but can potentially be absolutely devastating.
4. VILLAINS ARE ON FIRE!There's absolutely no doubt that the Design Team felt the pressure from Darth Vader aficionados like me ... the did not want to disappoint by creating a mediocre unplayable character, but did they overdo it? I'm not sure ... but an avalanche has started and it's going to be difficult for them to halt the tide. Han Solo, Qi'Ra and Dryden Vos all look pretty mundane compared to Darth Vader. 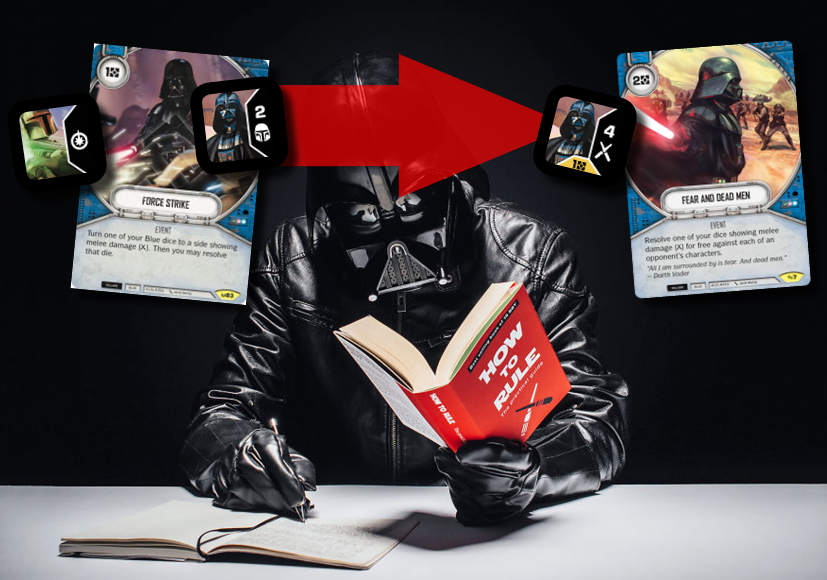 We might even start seeing old cards like Force Strike make it's way back into the game again. Imagine a Force Speed Special into a Force Strike into a Fear and Dead Men. Darth Vader is here to prey on low health 3wide decks and will give all but the tankiest 2wide character teams a run for their money!

I'm pretty sure that Darth Vader players everywhere are plotting how to rule the galaxy, and their opponent's are left to wonder how they are ever going to bash their way through 15hp.

Find our other Across the Galaxy articles here!