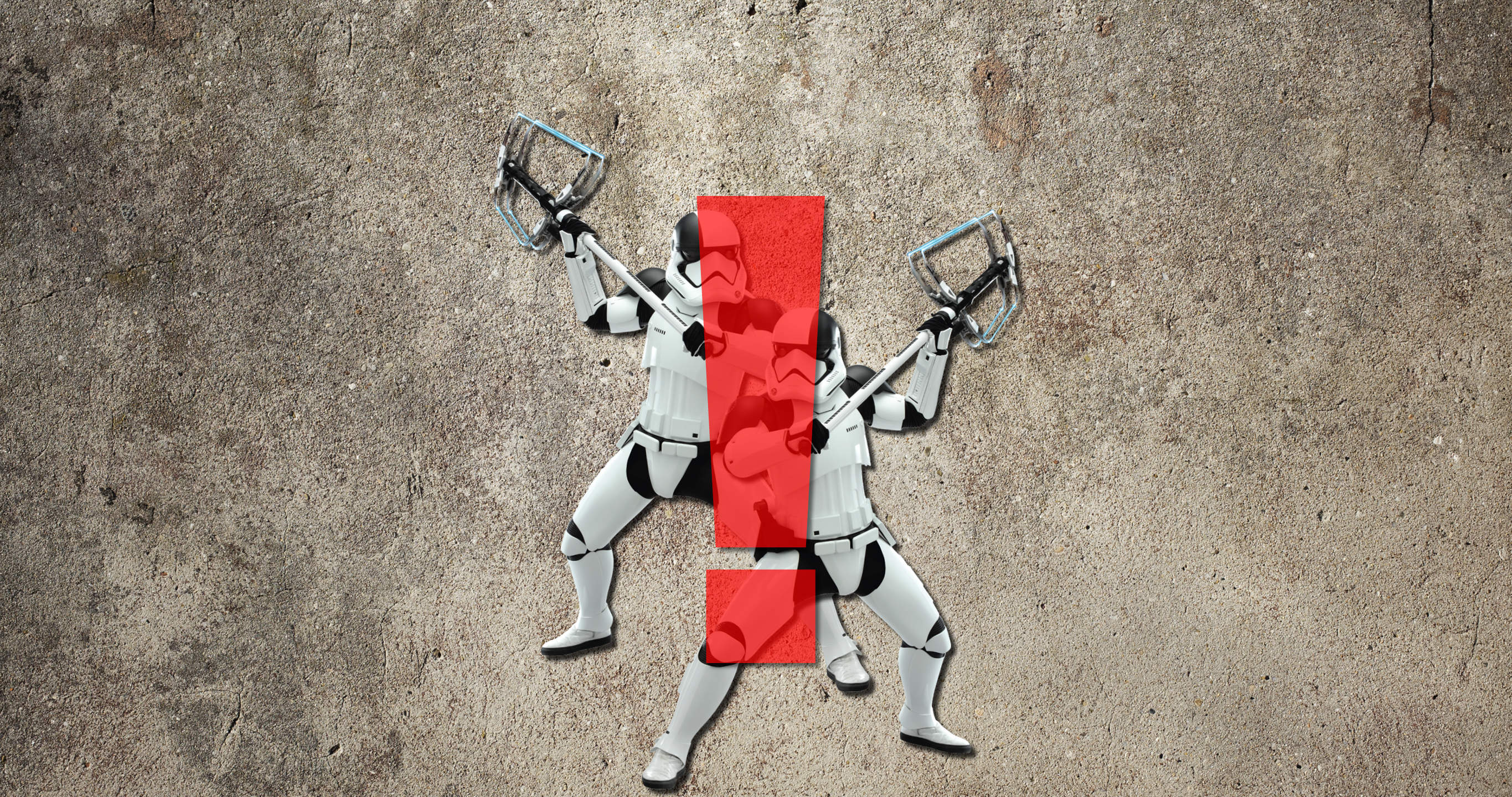 1. INTRODUCTION:As some of you might remember from my US Nationals 2018 report and my COLUMN on the YOUR Destiny website, I was pretty stoked about Luke Magnuson's version of the Doctor Aphra/Executioners list, which he managed to take to the top of Day1, 7-1, eventually bowing out in the round of top32, but paving the way for one of the most exciting decks, and as it would turn out also one of the most popular lists, of the late Way of the Force meta.

I had been planning to do a write-up of the list for a while, but then thought why not go to the source itself, ad fontes, and consult the MAIN MAN Luke Magnuson himself.

Luckily, for all of us, he agreed, and has done a marvelous job in not only readjusting the list, but also adding a great write-up on how to play the deck itself.

You should also read Luke Magnuson's NOVA 2018 write-up that he did for The Destiny Council (after you finish this article of course). 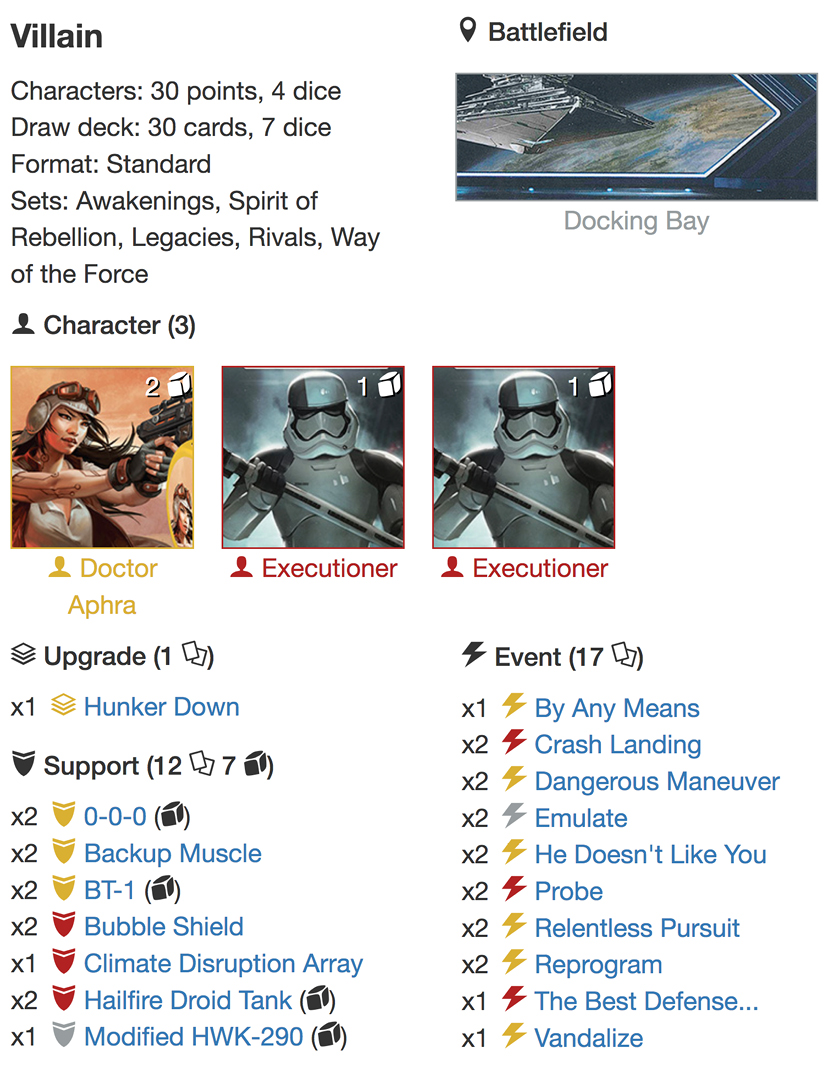 A FEW NOTES ON THE DECKLIST:
For the most part I’d keep it the same as the list I took to NOVA 2018, but I did make a few changes - taking out Slave-I and First Strike for two Probes.

Neither of those cards are bad, I just didn’t find that I wanted to spend the resources on them in most cases - and PROBE is just so good.

3. STRENGTHS OF THE DECK:The strengths of this deck come from two directions.

The first strength of this deck is that, as with other Doctor Aphra decks, it can build a board state with minimal resources. Aphra and her Droids arguably produce more damage for less resources than any other engine in the game. This allows you to spend your extra resources on other things - in this case allowing you to resolve pay sides with regularity.

The second strength of this deck is that it produces explosive turns via the Executioner ability. This allows you to snowball games in which you build an early advantage, and also gives you comeback potential in games in which you fall behind early.

To sum it up: Doctor Aphra provides consistency while the Executioners provide burst.
4. WEAKNESSES OF THE DECK:On the flip side, the weaknesses of this deck center around variance.

The first weakness of this deck is that it is susceptible to bad early draws. The deck is very dependent on drawing at least one of your murder droids early, and while your odds of this are high (especially with the draw engine), the games in which you don’t are difficult to win.

The second weakness of this deck is that it is susceptible to bad rolls. There are no Focus sides in the deck, and while most of the dice have 50% damage sides, the Executioners have two Blanks and every single die has a pay side, leaving plenty of opportunities for wasted dice.
5. HOW TO PLAY THE DECK:The game plan for this deck is generally straightforward: Get your Droids into play and do as much damage as possible!

I don’t want to go into too much detail explaining lines of play that mirror what we’ve already seen from other decks. Instead, I want to call attention to two aspects of your gameplan with this deck that are different from most decks.

When playing this deck, WHO you kill is much less important than WHEN you kill them, because you want to get maximum value out of the Executioner ability. You want to get the first kill as early as possible, so that you are more likely to trigger BOTH of your Executioners. This means that, unlike most decks, you’ll want to target your opponent’s weakest character, rather than their most valuable character.

Additionally, you’ll want to pay attention to the timing your kills. If you get that kill while an Executioner die is still on the table, you’ll miss the opportunity to roll the die in. You also want to try to get that kill with rerolls available - the Executioner dice are fickle, and if you time it wrong you may not get any value out of the extra dice. Sometimes, this means waiting until the beginning of the next round to finish a character off; setting up a first action Backup Muscle or Relentless Pursuit is often a better way to get maximum value from the Executioners than killing a character at the end of a round with no cards in hand.

Resource management is probably the most skill intensive part of playing this deck. You absolutely need to be able to resolve pay sides in this deck, and as such you cannot just spend your resources at the beginning of every turn. Just because you can play By Any Means or Vandalize doesn’t mean you should - you may regret spending that resource later. And I recommend waiting until later in the turn to play cards like Backup Muscle, Climate Disruption Array, or even a Hailfire Droid Tank - spending all of your resources on those cards can sometimes cost you more damage than they produce.

Ultimately, one of the reasons getting reps on a deck you plan to play at a big tournament is that it helps you get a good feel for the resource curve of the deck and how to manage your resources. Resource management is trickier in this deck then most, so make sure to get those reps in if you’re planning on playing it!

Lastly, I want to point out briefly that this deck has LOTS of triggers. All the characters and almost all of the supports have passive abilities, and it’s easy to forget them if you aren’t paying attention!
6. WINNING FROM BEHIND:You'll have plenty of games with this deck where you will be required to win from being behind. Your deck has lots of burst potential, but it can also be stone cold. Knowing when to resolve your Resource sides on the Executioners and when to discard cards to re-roll and when to hold them back for a stronger next round is vital to the success of this deck!

I've played test games with this deck where the first two rounds were punishing, but setting up for a strong midgame/endgame were key for me in edging out a win in the end.

It's easy to panic when you just can't find those damage sides. Don't! Stick yo your game plan!

I often find that you want to be the aggressor, putting constant pressure on your opponent! Getting dice in the pool to make your opponent constantly have to spend resources on mitigation, etc. can go along way to negate the weaknesses of your deck.
7. KEEPING APHRA ALIVE:So many things in this deck rests on Aphra's dual abilities with her draw ability arguably one of the strongest in the game. You have plenty of cards that will keep her alive and allow you to spread damage around, i.e. Dangerous Maneuver (moving to damage to Bubble Shields AND drawing cards AND dealing Indirect damage if you have 0-0-0 in play), Crash Landing, etc.

In the endgame she is starting to lose some of her power, and you might consider sacrificing her to keep the Executioner dice in the game. Make sure you know which cards have been played from your deck already (this is obviously true for any deck, but in this deck maybe even more important).
8. MULLIGAN STRATEGYYou need to see one of the two Droids in your starting hand, preferably 0-0-0, and if you draw none of them pitch everything to refresh your hand.

Although starting with mitigation is nice, you should never keep it in your starting hand. You can almost live with any kind of mitigation, but you need to find the Droids. In an Aphra/x mirror, I'd even consider dropping BT-1 to dig deep for 0-0-0.

Edited and Annotated by
CLAUS STAAL