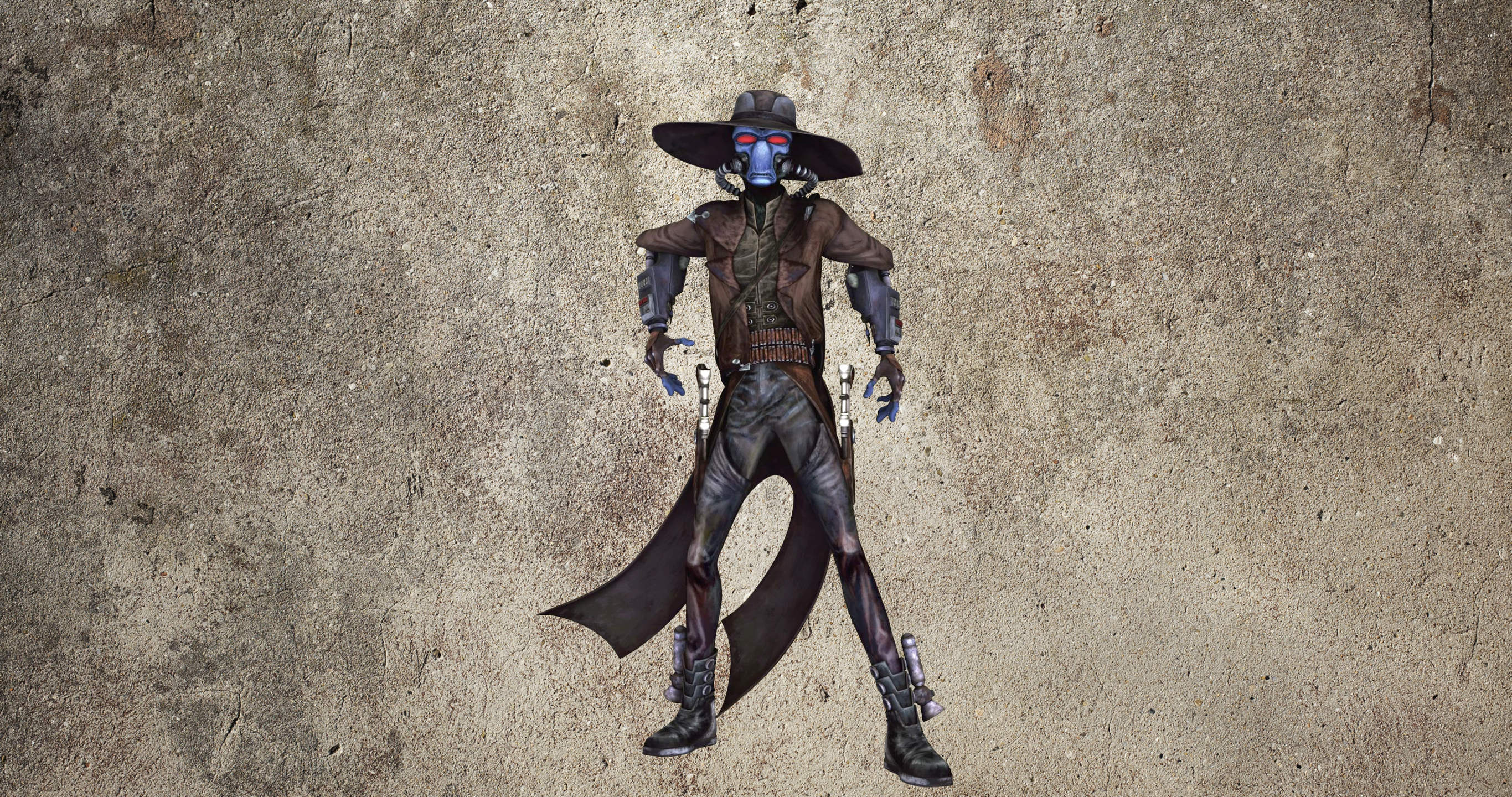 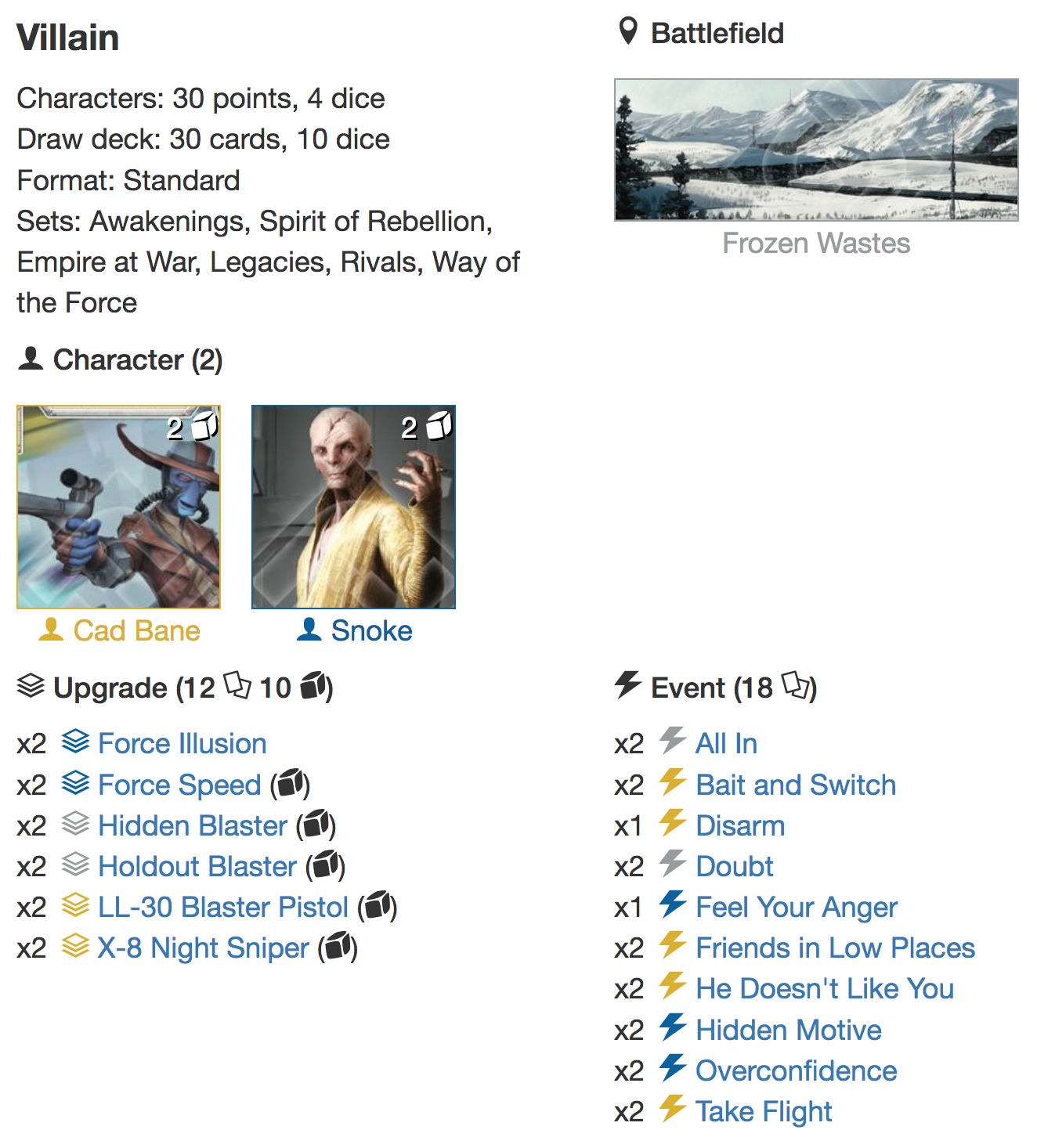 1. GENERAL COMMENTS:It's really no surprise that many of the powerful villain decks we will see coming out of the Way of the Force meta will be Snoke decks. He is just insanely powerful. I'll analyse him in detail later, but it looks as if it doesn't really matter if you pair him up with Kylo2 for some monoblue lightsaber action, Thrawn for vehicle and resource shenanigans or in the case of this deck Cad Bane, the dread mercenary. He is the supreme enabler, almost on par with Yoda, and definitely what villains have been longing for.

This deck is pretty straight forward and simple minded: KILL, MAIM, KILL! ... It does have a few surprises for your opponent (as any good simpleminded aggro decks should!)
2. CHARACTERS: 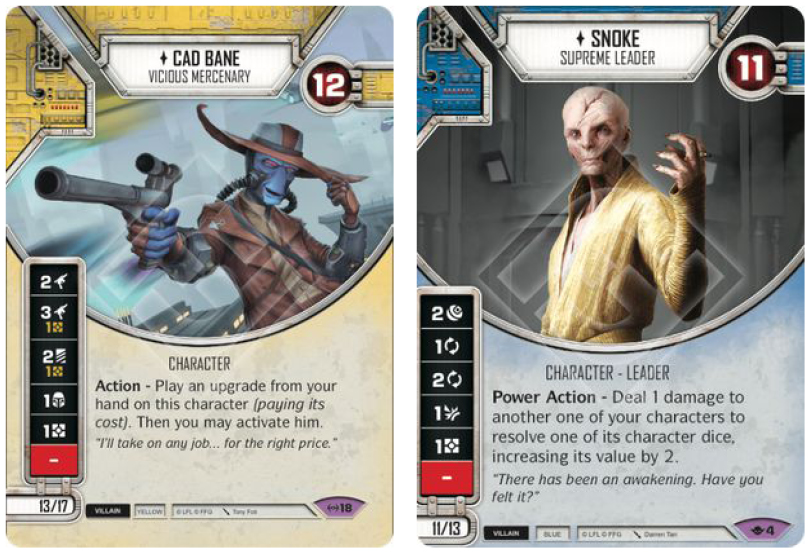 Cad Bane has sort of been out of the loop since his beloved sidekick Captain Phasma got nerfed sideways and backways. But even in those glory days he was never really stealing the show (Remember FN/Kylo2, BabyVader/Phasma ... it was back then!).

Cad Bane is sort of in a weird spot. One one hand he is the ultimate aggro character. He possesses a great die with sides that are all usable, has good health (even with the slight bump in overall health in Way of the Force), an amazing ability that is second to none, and with the nerf to Sabine Wren, might be the best action cheating aggro character in the pack, and the price is right. So what stopped him from conquering the competitive scene?

Mostly it was due to the lack of good support characters in the 12-13point range. A good support character is either a doer (like Captain Phasma pre-nerf that could finish a game on her own) or an enabler (like Yoda/Maz who makes your other characters better). On top of that you need 4 character dice as a minimum. Going into a gunfight with just 3 simply leaves you too vulnerable. Snoke (and Pryce to a lesser extent for a Yellow/Red deck) is exactly that enabler.

Secondly it was Cad Bane's dice itself, because as awesome as it is, it comes with a hefty price tag. Two of his sides are pay sides and they are both some of his best sides, and seeing how Cad Bane often spends all his resources on guns and chicks, there's not much wiggle room.

But add Snoke's Power Action to the equation, and things look a bit different!! Are there any of those sides you would not want to resolve at the price of 1 damage (and maybe 1 resource)! 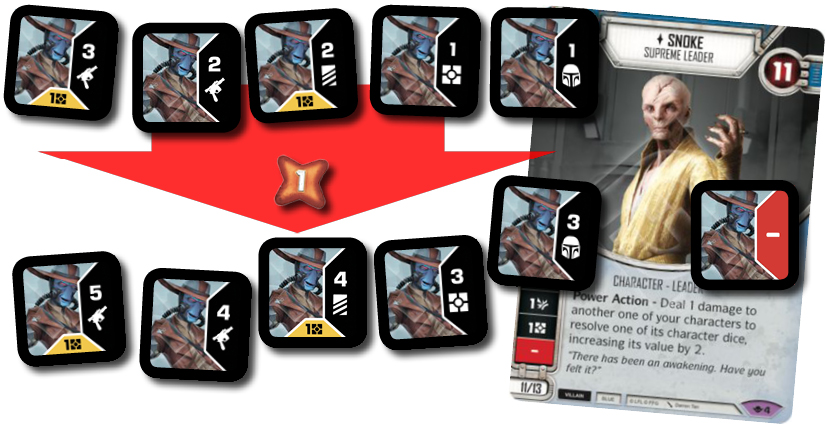 That's how crazy Snoke's Power Action is. 4 Discard for a resource is an incredibly powerful opening! Or Power Action the Resource side for 3 resources round 1.

I've had games where I'd use Cad Bane's action, drop a Hidden Blaster on him, activate, find the 2 Ranged damage side and a 1 Resource side. Use Snoke's Power Action for 3 resources, resolve the 2 ranged damage and get on with my life. 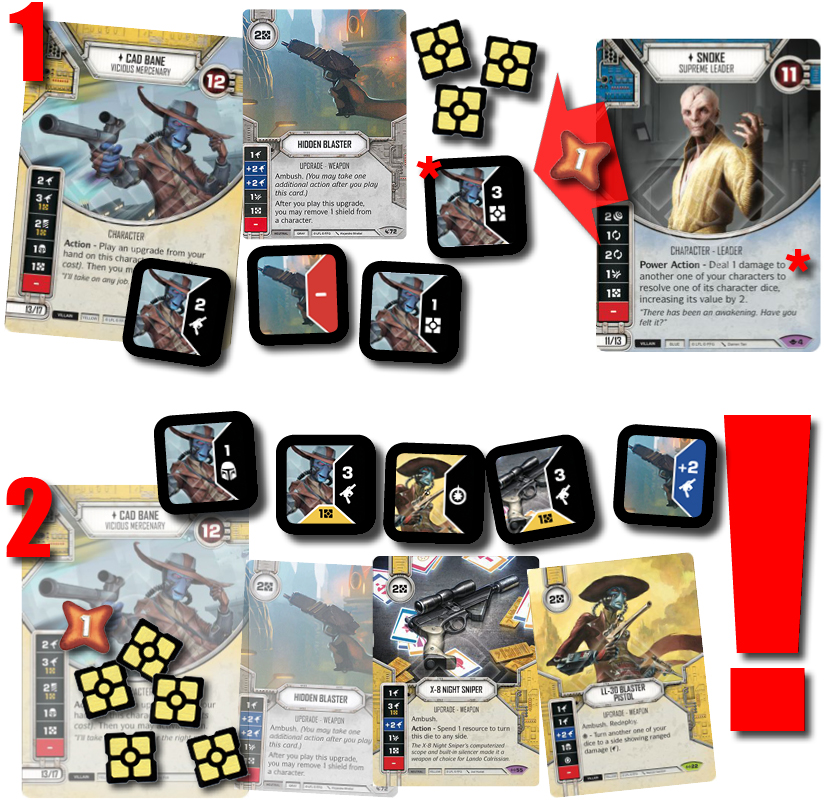 Going into Round 2, I've amassed 5 resources, dropping an LL-30 Blaster Pistol and an X8 Night Sniper, activate and kill something (your maximum damage output, which you can actually pay for is now an astonishing 11 Ranged damage, and if you coun't in another Power Action off Snoke, it'll be 13 Ranged damage). I'd recommend you read Mads Utzon's article on resource management in order to understand just how powerful resources are in this game, particularly in round 1 and 2.

Enough has already been said about Snoke's Power Action, everybody realizes how good it is, but he also adds an unprecedented level of consistency for villain aggro decks bringing both a 1 Focus and a 2 Focus side to the party.
3. UPGRADES & SUPPORTS:Yellow villain has access to the best possible upgrade suite for optimizing the effect of Cad Banes ability. All 4 guns are nuts and serve their purpose beautifully. There's also the added advantage of both the Holdout Blaster (arguably the weakest of your guns) and the LL-30 Blaster Pistol being redeploy weapons which means that Snoke can, if he has to, take care of business in the end game should Cad Bane go down. I rate the Hidden Blaster the best gun for the opening salvo (because it off sets the fact that you'll be aiming for your own Battlefield and will often win the roll-off), followed by the indomitable X-8 Night Sniper and then the LL-30 Blaster Pistol.

The main concern is that 8 guns might make for too small an upgrade package. I'd like to be at a minimum of 9, and would obviously want to see a gun in my opening hand, but preferably 2. The problem is that there really aren't that many good 2 cost upgrades left (you need to be able to play them round 1), with the most obvious one being Verpine Sniper Rifle, but it only has 2 sides you can reliably resolve, and it slows your deck down! Choices are a bit more rife if you look at 3cost upgrades.

These are the odds for 1 or 2 weapons in your starting hand that you'll be operating with dependent on the number of upgrades in your deck.

I like to have 2 to make me less vulnerable to losing a weapon from my hand, and it also suit my plan of taking resources early and ramp hard for round 2. If you get the 3 resources with Snoke's Power Action, you can drop your second weapon and use the Ambush action to claim and keep initiative for the next round. 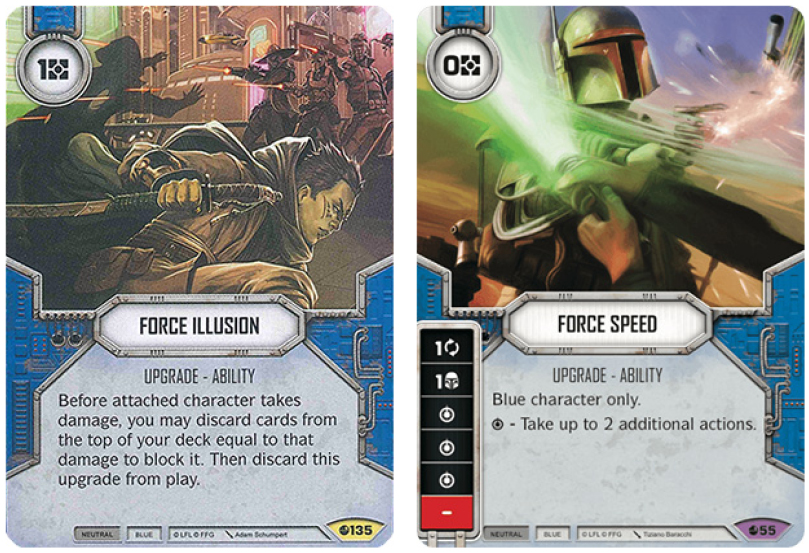 I never count Force Illusion as an upgrade, it's not, it's mitigation - pure and simple. As always don't let the Force Illusion sit for too long. Use it to block 2-3 damage and you're fine. It wouldn't be the first time a Force Illusion has been sitting for too long and not being able to block damage because you ran out of cards.

Force Speed has proven so incredibly effective with Snoke and Cad Bane. Activating Snoke first, finding the Force Speed Special and a Focus, then playing a gun on Cad Bane, and you usually end up killing someone. Still one of the best cards in the game, and it will be sorely missed when it eventually rotates out of Standard Format play.

In my first iterations of the deck I included Backup Muscle, and while it's been a staple in yellow villains since Awakenings, it definitely feels too slow in this deck. This deck wants to go fast and it likes to have initiative, so I'm currently considering several cards to spice up the deck a bit: Frighten, Salvage Stand (for some resource disruption) or maybe even a 9th gun (which would probably be a Verpine Sniper Rifle).
4. MITIGATION CARDS:Your mitigation suite consist of 11 cards (including the two Force Illusion), and I'm still not entirely set on the composition. Normally, I rate He Doesn't Like You quite high, because it's staple mitigation that does it's job and does it well. It allows you to remove exactly the die you want, but in this deck your dice are worth so much, that it sometimes feels very disruptive to part with any of them as opposed to the Boba/Seventh deck where you always have the Seeker Droid die to remove.

Because of the way the deck plays out, with a 2 cost weapon played on Cad Bane, one of the conditions for the mitigation cards is that they have to be 0 cost. He Doesn't Like You, Hidden Motive and Doubt all fulfill that condition, while Overconfidence is so incredibly good with Cad Bane's die for the infamous Overconfidence Battle (listen to Mads Utzon's talk about that here in the YOUR Destiny Podcast Episode 13). 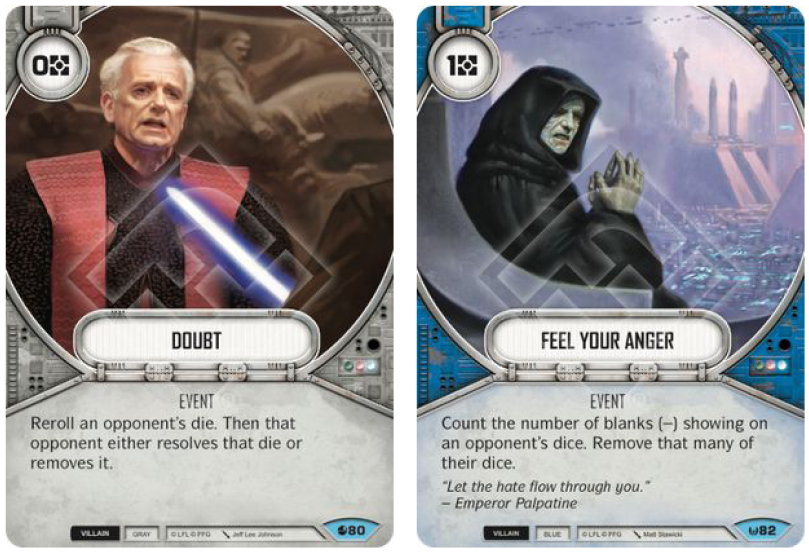 The latest addition was Feel Your Anger to combat the vehicle decks in which Cad Bane/Snoke seems to have a favorable match up as it can snipe off low health character fairly easily. If Kylo2 keeps being a focal part of the meta Hidden Motive is not going anywhere. It's one of the best pieces of free mitigation against characters with several die sides with the same symbol (e.g. 3 Melee sides on Kylo2).
4. TECH CARDS:

All In is almost a no-brainer in a deck boasting this many guns and big damage sides as well as focus sides. A single 1 focus on a Force Speed or on a Snoke die can set in motion an avalanche of damage. 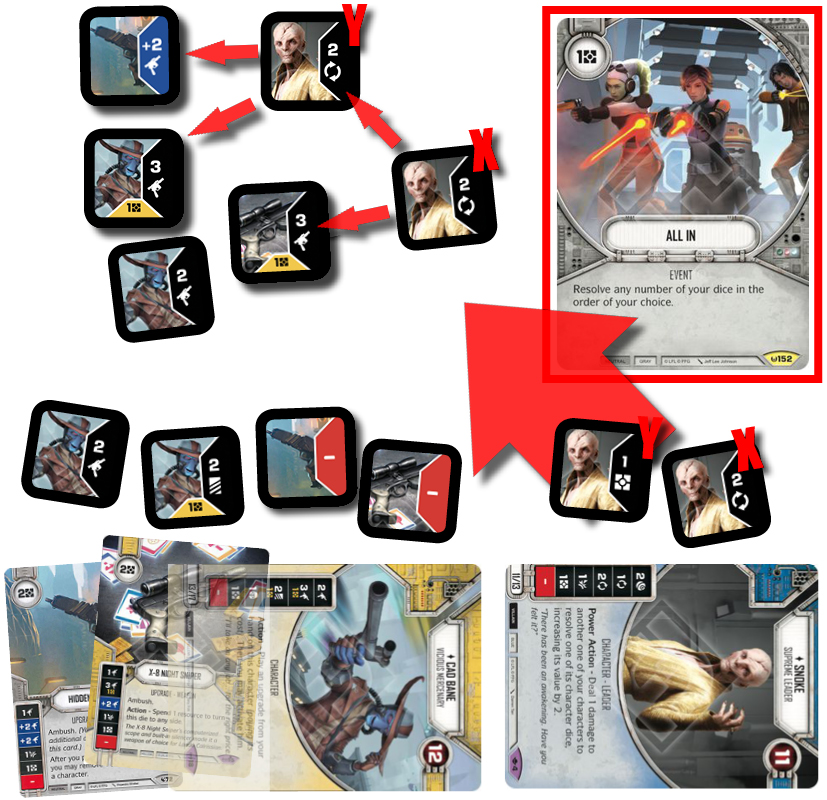 Bait and Switch is a classic by now in Yellow villain decks, and remember that Bait and Switch plays can be made to facilitate the game winning All In plays if you have the resources, i.e. Bait and Switch a Snoke Resource Side into a Focus Side, with the Ambush Action you play All In. Then you annihilate something from the table. Even with just a single resource Cad Bane armed with an X-8 Night Sniper and a Hidden Blaster can do 8 Ranged Damage, and if you have time to perform the Power Action as well that would be increased to 10!

This means that All In plays are more than likely to happen since you in reality just need 1 Focus to set it all in motion.

I've toyed with 2 Take Flight in my flex spots. If only Take Flight didn't just work on yellow dice it would have been awesome (i.e. re-rolling Snoke's dice, find a Focus, then All In. See where this is going!).

The question of Disarm vs. Vandalize really came down to the quality and number of character dice at your disposal. Disarm sacrifices one die, and it can be any die, whereas Vandalize would require the use of several dice and although it also can remove Supports, I didn't feel it was enough to justify it's inclusion. You are flush with damage sides, and using a Cad Bane 3 Ranged to remove a Dagger of Mortis or a Maul's Lightsaber is just unbelievably good!

Friends in Low Places really doesn't need any introduction. It secures your dice by removing mitigation from your opponent's hand.
5. BATTTLEFIELD:The Battlefield of choice has since forever been Rebel War Room, which I chose for my first 10 test games, and then I started exploring various alternatives. This will be very meta dependent though, and further play testing will show whether or not Cad Bane/Snoke will be able to outpace the likes of Obi/Maz, in which case there might be reason to keep a more proactive Battlefield like Frozen Wastes. Also, Snoke somehow also seems to be able to solve some of the issues of resource management in this deck (as you'll notice I've even excluded cards like Truce and Well Connected), which makes a strong argument for not using Rebel War Room. I've even considered using Outer Rim Outpost to really strengthen the resource economy and filtering of the deck to the maximum.

6. MULLIGAN STRATEGY:As described previously, you want at least 1 Weapon upgrade in your starting hand, a Force Speed, early mitigation, whereas you want to get rid of your All In as well as Bait and Switch. My preferred starting hand would be:

You can read more about how to mulligan in our game theory article on the subject.

Remember that as a Patron you have early access to most of our articles. Go to our Patreon to find out more!