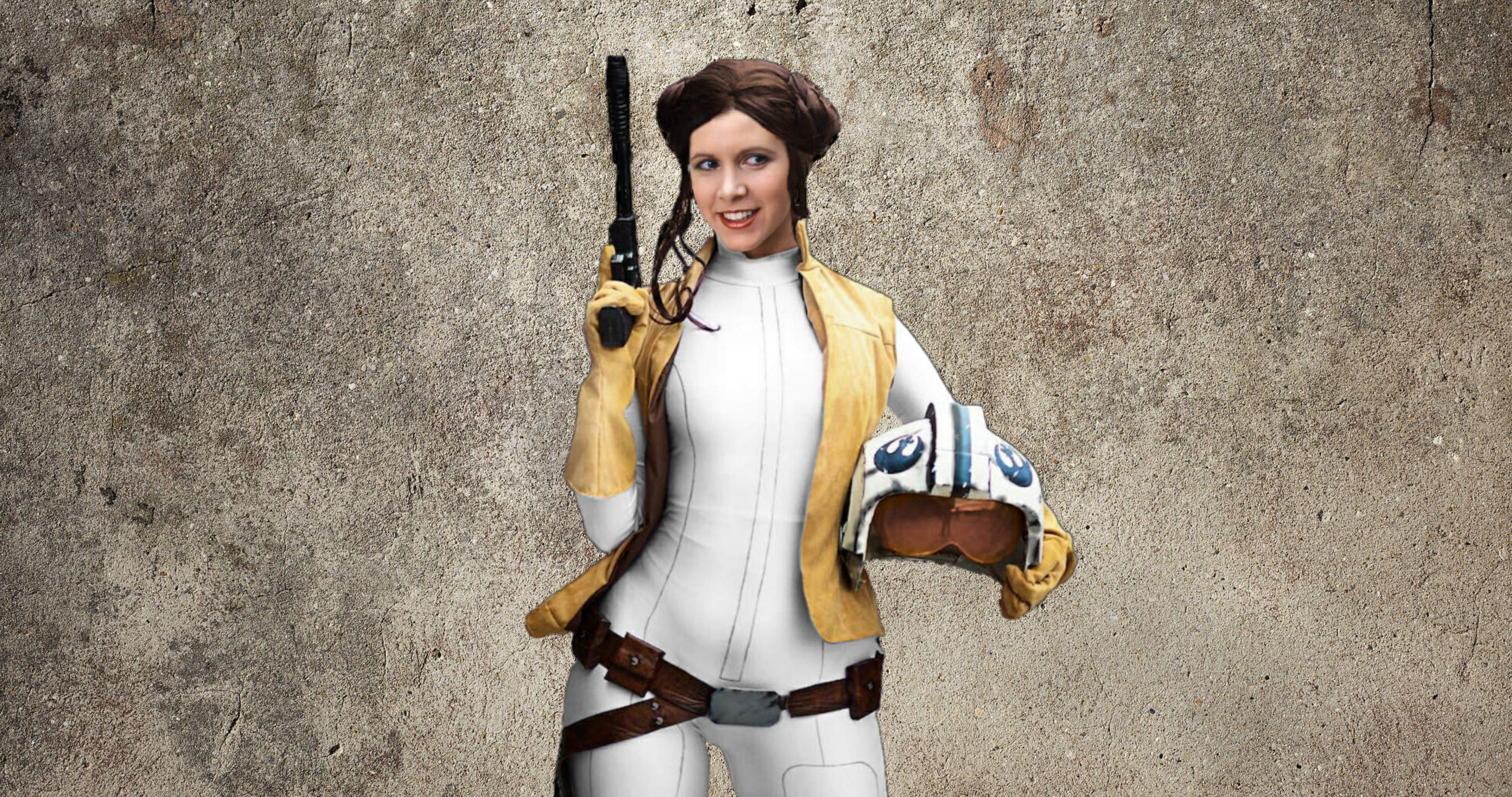 REVISITING "THAT" INTERVIEW:So with Way of the Force finally hitting the streets, I came to think of one of the first interviews Jeremy Zwirn did, for Team Covenant in December 2017, when he took over as lead designer for Star Wars Destiny, stating some important visions he had for the game. 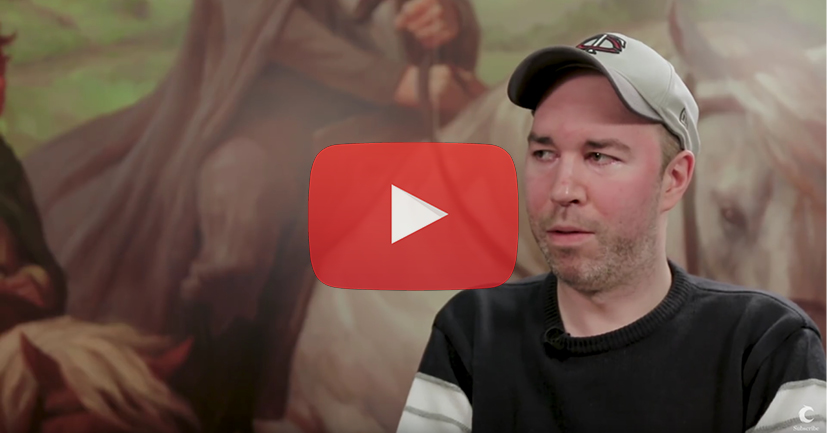 Amongst these were:
On top of this, Jeremy added, concerning milling strategy within Destiny (transcribed):
"Mill shall always be out there, should always be viable, but, I prefer if that was not the best deck clearly. If a big field at a tournament was all mill decks, to me that's not Destiny. A lot of other players would agree, that's just not Destiny. Viable, sure. Out there. But if it was clearly the best deck, I'd rather not have it".

There's no doubt that the above statement is clearly visible in the original "nerf" to Unkar Plutt decapitating Thrawnkar (eThrawn/eUnkar) in its infancy, and in a recent article, "Three Rules to Mill by", that I briefly talked about in my article on "Game Theory: Changing Your Attitude" (mostly in the negative).

Honestly, the reasons given for the points increase in the article makes no sense. While I generally agree that the point cost of Unkar Plutt was too low compared to other support characters at that time, which became even clearer with the release of Thrawn, I could not disagree more with the premise given in the article:

"Non-interactivity"? C'mon, seriously ... If you had your deck milled out by a well timed Buy Out, you've probably done something wrong. 5+ resources don't just come out of nowhere, and there are plenty of ways of getting rid of a Buy Out sitting in your opponent's hand - or at least make an honest attempt. For any of us who actually piloted the Thrawnkar deck, or played against it, it wasn't an easy deck to defeat, but to the best of my recollection, it won exceedingly few tournaments during its tenure albeit a short one.

[EDIT]: After this article was completed the Holocron document was updated and becomes valid on July 11, 2018 (you can find the latest version on this link to the Fantasy Flight Games website). The Holocron document saw Unkar "un-nerfed" slightly. It doesn't change my main point though as Unkar is still unplayable with Thrawn.

Anyways ... I'm getting carried away here.
DOES LONGER GAMES FAVOR MILL?There are a few interesting, but seemingly contradictory statements in the interview with Jeremy Zwirn. First of all, it does look like a general extension of the expected span of a game of Destiny from 3-4 rounds to 4-5 rounds would be favoring mill? If the game dynamics are made to work in favor of either:

Then it should be expected that hero mill decks would come out on top?
LEIA, THE HERO WE'VE BEEN MILLING FOR?The 2 hero characters, in Way of the Force, most obviously suited for mill are Leia Organa and Cassian Andor. And the two even fit quite nicely together! 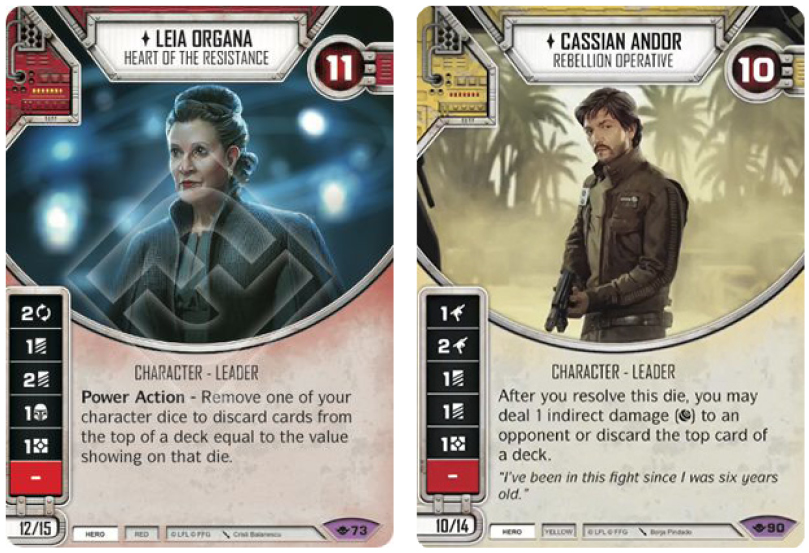 When Jyn Erso was released in Spirit of Rebellion, everybody got excited for about 5 seconds, until they realized that her 15/20e points cost would mean that she would NEVER see play. And we were right. Now, we have the better version of Jyn Erso, her male counterpart in Rogue One and now in the game as well: Cassian Andor (who intriguingly enough lends himself equally well to mill and aggro decks because of his bonkers dual trigger ability) and on top of that as the heart of it all: Leia. And it really does look promising.

For the purpose of this article though we'll try and look exclusively at Leia and the possibilities she offers, while future articles will deal with specific character teams and deck analyses.

Leia Organa (and Cassian Andor) is the first usable hero character with two Discard sides and one of them even a 2 Discard side. Because of her Power Action, she also effectively turns her other 3 sides into mill sides although "from deck" rather than hand, while improving the die sides of her side kicks. The 2 Focus side on Yoda and Padme suddenly becomes 2 mill from deck, same goes for the 2 Ranged damage on Cassian Andor. Leia is an enabler and she's good at it.

Hand control is important, not only because it facilitates your win condition (so does mill from deck), but because it simultaneously limits your opponent's possibilities. Milling your opponent's hand robs him of potential upgrades and thereby degrades his board state, it minimizes his possibility of fixing his bad die rolls (by not allowing him to pitch cards to re-roll), and finally, it is important, because it was the last piece of the puzzle missing for hero mill. The Bespin Wing Guard helped a bit, but other than that hero decks were confined to the clunky Chance Cube/C3P0 hand mill strategy.

Not being dependent on all of these cards opens up space in your deck to include all the best defensive and "mill offensive" cards you need to further your own win condition. Hero mill definitely looks like it has its bases covered and is going from strength to strength.

Leia Organa plays out a whole lot different than the powerful Rieekan/Yoda deck though (if you were to decide for the Red/Blue route), as you are not afforded the powerful shield sides of Rieekan and cannot go toe-to-toe with aggro decks in the same manner, and you are much more vulnerable to dice control. Your dice and resources are your most expensive commodities and will win you the game. You'll need to be able to protect both!
WAY OF THE FORCE AND MILL?The new set does offer some cards that should go straight into a Leia Organa based mill deck. 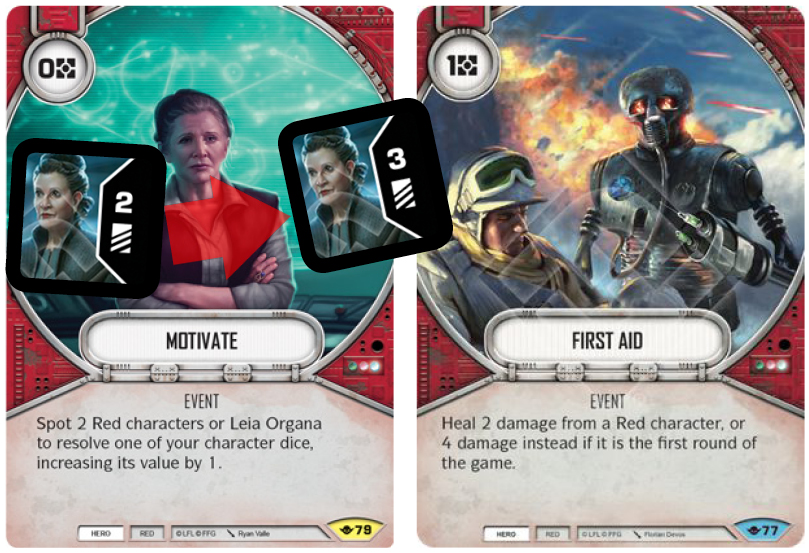 Motivate is obviously designed to be played in a Leia centered deck, and it doesn't require much imagination to see exactly how powerful the ability to resolve one of your character dice, i.e. the 2 Discard, is.

First Aid is another card which seems to be tailor made for Leia. If your opponent decides to go all in on Leia, it can be a massive blow for their plans if you suddenly heal 4 in round 1. That could potentially be their whole round wasted. You do not have that kind of wriggle room against a mill deck. I'd expect to see 2 First Aid and 2 Field Medic in a Leia deck, and they'd most likely serve as 4 of your mitigation cards.

The card that will be the blow-out card of the set for Leia mill decks is Suppressive Fire though.

It enables some incredibly powerful plays. First of all, it is the first reactive card of its kind in Star Wars Destiny, and it doesn't require an action to use - AND you can use it even when having claimed the Battlefield. The only real downside to the card is the fact that it can only be used on the initial character activation, so it will be useless if your opponent discards to re-roll (but that shouldn't happen too often against a hand mill deck), fixes his dice with a focus or similar. Suppressive Fire is the reason why I'd consider adding a plot to my Leia deck, which most likely will be Espionage (Leia/Cassian) or Fortify (Leia/Yoda), and although the former plot hurts you as well (the fact that you could play Rebel offsets the downside a bit), it also allows for some nasty plays in conjunction with the Battlefield Comm Tower and Leia.

Normally, as a mill player, you want to be reactive and keep mitigation in hand for those all important last re-rolls that could spell doom for your characters. Comm Tower allows to claim out fast, resolving a Leia 2 Discard increasing its value by 1. That's hell of a sending off discarding three cards from your opponent's hand, while at the same time keeping Suppressive Fire if your opponent is yet to activate a character. I'd even consider adding Hit and Run or Force Speed (for Red/Blue decks) to put even more pressure on my opponent. Imagine a mill deck being the offensive deck??!!

There are similar plays where your opponent activates a character, you use the Suppressive Fire to remove a character die and then you proceed to claiming with Comm Tower, potentially removing the last cards in your opponent's hand.

An argument could be made for running Docking Bay as your Battle Field instead of Comm Tower, but with access to cards like Rebel, I honestly don't think you'll need to recycle the Suppressive Fire and I find the potential claim actions with Comm Tower the stronger plays.

Leia also suddenly empowers some old forgotten cards, I guess no-one ever played it, namely Commando Raid. It's an incredibly powerful card, that not only allows you to increase Leia's 1 Discard and 2 Discard sides to 3 and 4 Discards respectively, but also draw a card on top of that!! Just appreciate for a second that Leia can empty an opponent's hand with one swift play! It's out-of-this-world, and I love how such a "miniscule" change suddenly enables such powerful plays. Commando Raid has Leia written all over it, but I doubt it will ever see play outside of decks with her in it. It's almost sad it will get rotated out when the cycles change. 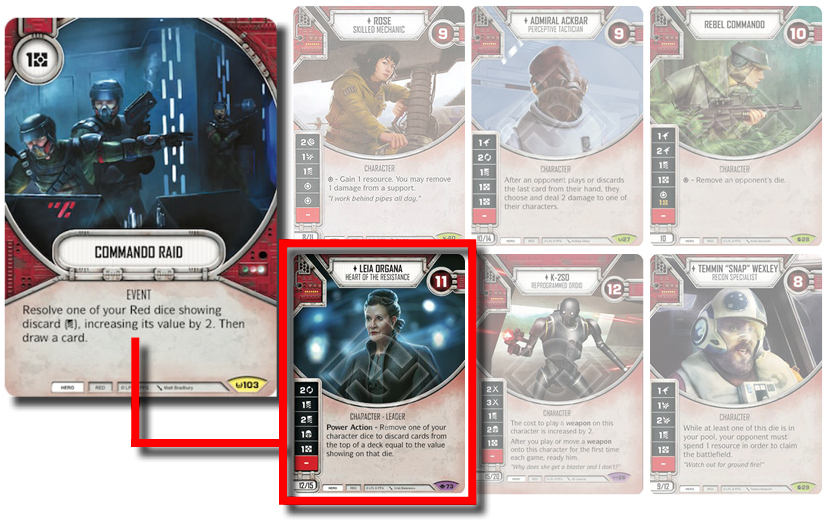 The two most obvious builds coming straight out of the box seem to be Leia/Yoda and Leia/Cassian, and while I still believe Yoda to be the best support character in the game, I'm leaning towards the Cassian Andor team-up for the better fit.

YELLOW will give you access to the finest mitigation in the game, Easy Pickings, Entangle, and on top of that Second Chance and Hyperspace Jump as well as the aforementioned Rebel, while Blue of course cannot be entire dismissed due to great tech cards like Determination, Force Illusion and Strength Through Weakness, and the argument for pushing for Red/Blue would probably be the concerns over resource management in a Red/Yellow deck.

CONCLUSION:I'm certain that we'll see Leia in play, and I'm also confident that she is exactly what hero mill needed to take the step beyond the "maybe it's hot, but it's probably not" status. There's no doubt that you'll still struggle against super-aggro decks (not really a surprise though), but I honestly think that Leia adds new layers to what is possible with hero mill, and for the first time since I opened my first booster pack, I'm stuck with a feeling that I'm looking at the hero we've been milling for! 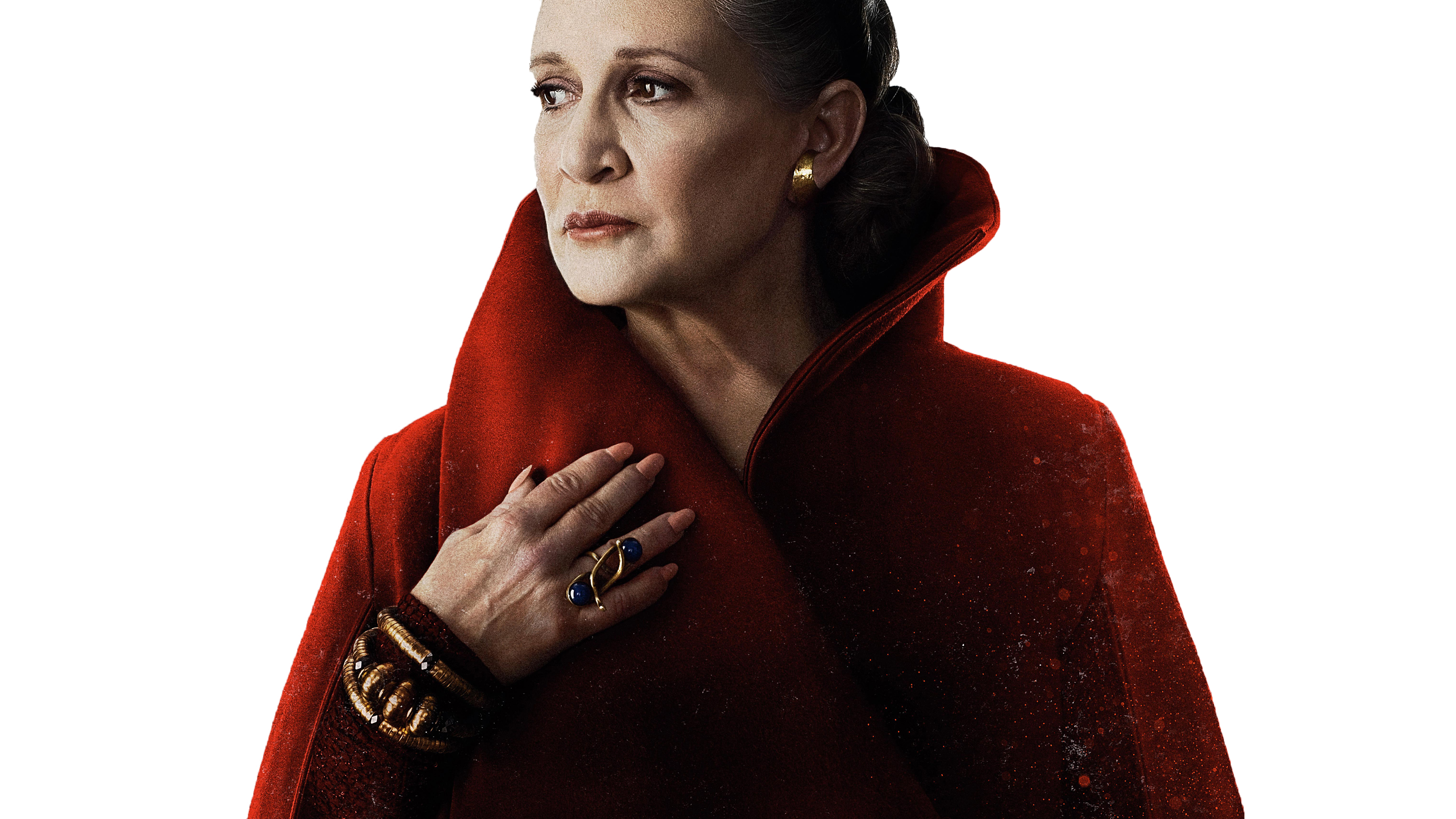 This is the basic framework for a list that I've tested a bit. It is definitely still not in its final form, but I'll be working on a deck analysis after some more test games (cards I'm currently considering include: Logistics, Fall Back, Law & Order). It's fast, furious and squishy: 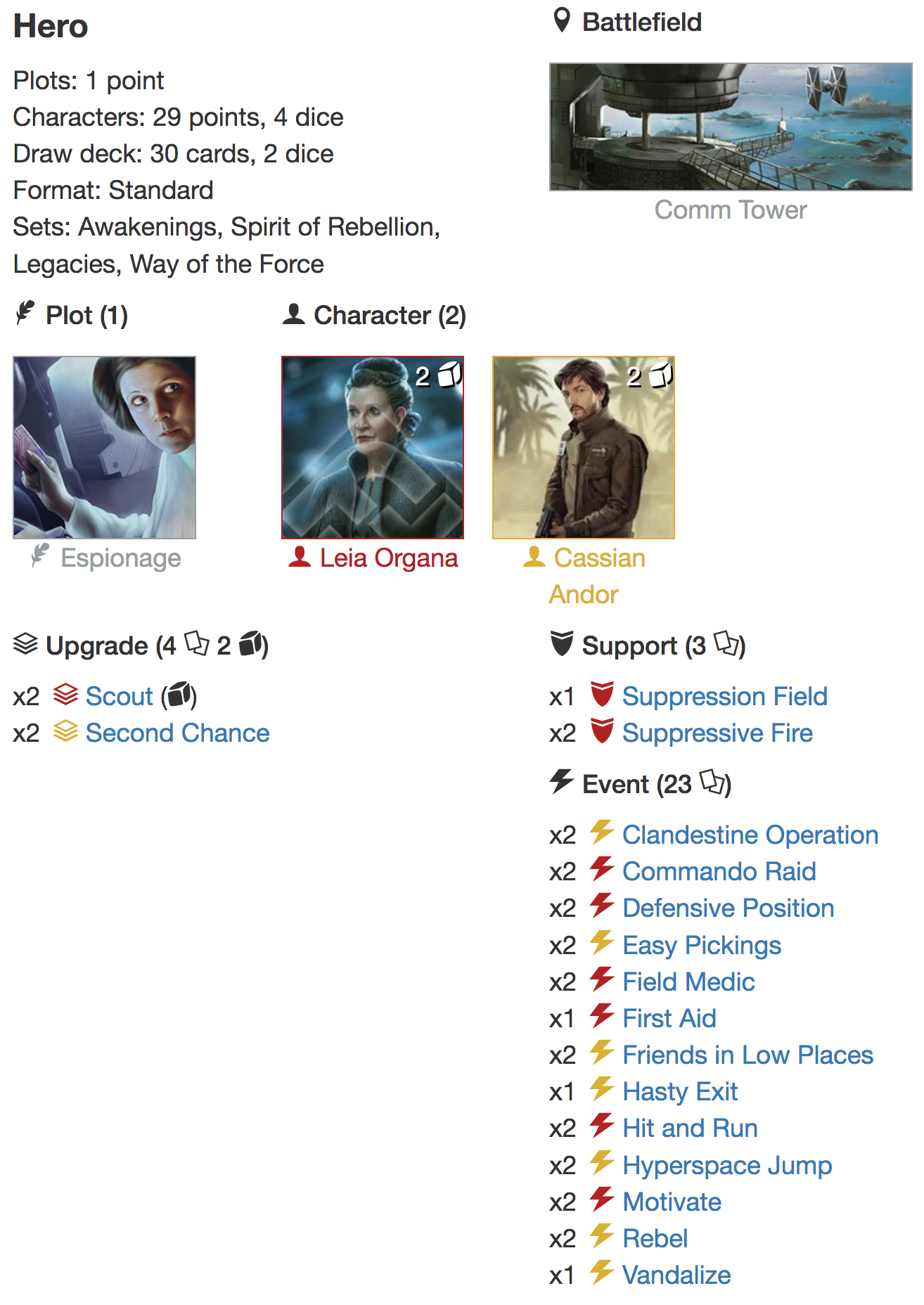