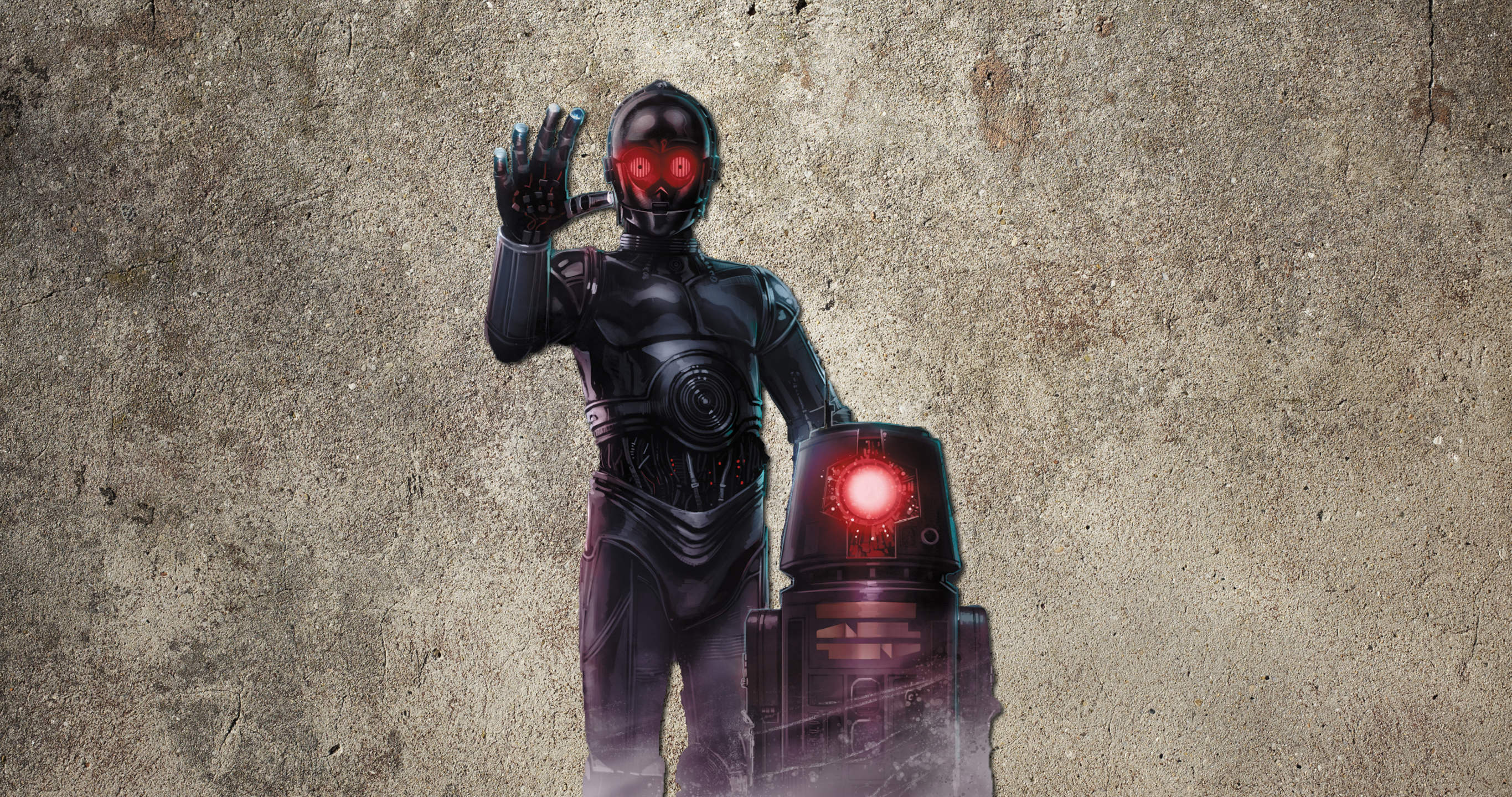 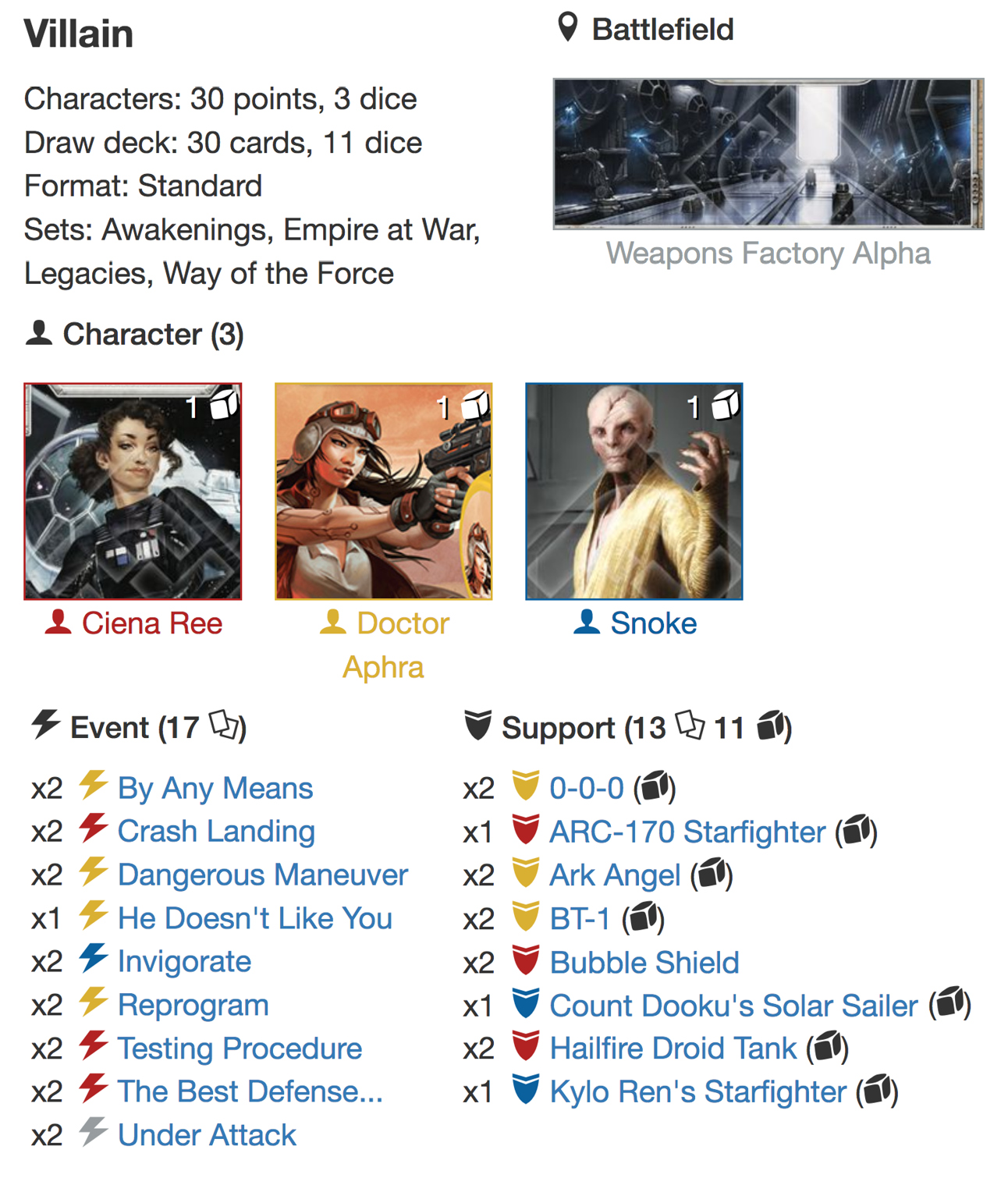 1. COMMENTS:A new expansion set, a new meta and anything goes in the early stages of development before the cream of the decks rise to the top.  My favourite part of a new set is the uncertainty about which cards are actually good / over-powered or just simply trap cards that people fall into playing incorrectly. I am always drawn to trying the off-meta decks in the hope of finding a hidden gem, an advantage that gains you the edge over the standard, predictable meta decks. In the last Store Championship of the Legacies meta I played such a deck : Kylo/Veteran Stormtrooper/Greedo, all at one dice, with cards such as Lightsaber Throw, No Survivors and even Crossguard Lightsaber to do damage direct from hand. It did ok, taking a Top 4 place and winning a constructed pod at Euros, but was lacking a little punch.

So what next? Back to the fundamentals of most CCG games and what will win you games: Card advantage and resource advantage. No card provides this currently as well as Doctor Aphra now does, with her compliment of droids and numerous ways to deal indirect damage to yourself, so it was back to revisit a deck I had built with the release of Legacies : Seventh Sister/Dr. Aphra/Ciena Ree, and only a small step to see just what a drop-in the all powerful Snoke would be for a deck such as this.
2. CHARACTERS:

A rainbow suite giving access to the full range of Villain and Neutral cards is ideal for a deck such as this. DOCTOR APHRA is in there mainly for her special ability, but her dice itself is not too shabby with 2 Ranged damage for a resource, 2 Indirect damage and 2 Shields, and all her dice sides except the Shields work well with SNOKE’s Power Action under the right circumstances, even the Discard side has worked well in discarding the last 3 cards from my opponent’s hand at the opportune time.

CIENA REE’s two Resource sides are key to the deck as you will be wanting to Power Action one of those Resource sies with Snoke every turn if possible and you have a 45% chance of hitting a Resource side on either Aphra or Ciena on their first activations. Snoke provides the Power Action, but also Focus and even his 2 Indirect damage is worth resolving, as the mainstay of the deck is to kill your opponent with 10,000 tiny cuts of Indirect damage. 30 health in the team means the opponent is going to have a hard time chewing through them, combined with most opponents being unsure about who even to target first. Do you kill Snoke and turn off the Power Action? Doctor Aphra to shut down the card drawing and cheaper droid play? Or Ciena Ree to stop extra income and also key cards like The Best Defense...?
3. THE DROIDS WE'VE BEEN LOOKING FOR: 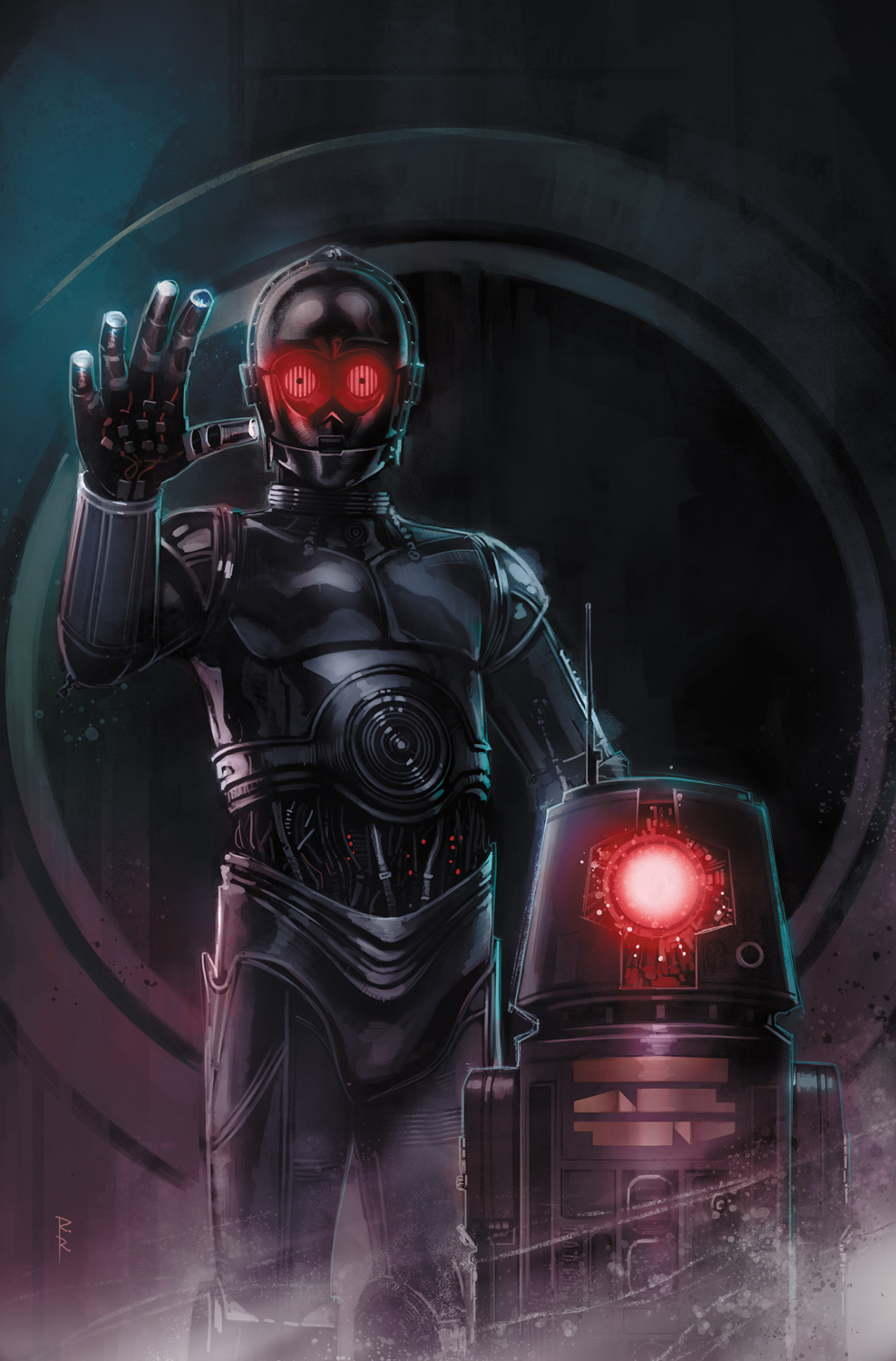 The decks runs both of Aphra’s murder droids, 0-0-0 and BT-1, and these complement each other excellently.  0-0-0 is ideally going to be your first drop, as well as triggering off of BT-1's ability, it also triggers on a number of cards in the deck, providing a steady stream of Indirect damage aimed toward your opponent. With your 0-0-0 going down for just a resource as your first droid of the round, or for free with a Reprogram, the value is there for all to see, a dice reminiscent of a Kylo Ren die minus the blank side is not to be ignored.

BT-1’s die is also great with 4 damage sides and an ability that, when 0-0-0 is around, sees your opponent taking 2 indirect damage every time it is activated, (and you draw a card if Aphra is still around), and believe me this damage soon mounts up.

The other droid in the deck is the Hailfire Droid Tank, and this is some serious kit. It is also a vehicle so if you are lucky enough to win the roll-off and pick your Weapons Factory Alpha as the battlefield, the Hailfire can be played for just 2 resources, getting a reduction from both the battlefield and Doctor Aphra.  Add in a Reprogram and you can be living the dream with a 1 cost Hailfire Droid Tank in turn 1.

And don’t forget its ability that causes another Indirect damage to your opponent (and 1 every time a future vehicle is played) and allows you to activate it immediately (and any other droids you play in the future) and the damage is cumulative, so if you get both your Hailfire Droid Tanks out and your opponent is suffering 2 Indirect damage each time you play a vehicle.
4. VEHICLES:So this is a vehicle deck?  Well sort of yes, the extra cards from Doctor Aphra and the extra resources via Snoke just lends itself to playing supports.  We have already mentioned the Hailfire Droid Tank and it's going to be exciting to see if any future cards also have the Droid-Vehicle sub-type, thereby adding interactivity and strengths to decks of this type.

ARK ANGEL has earnt a place in the deck due to its cost (2 resources) and an ability that really pushes the deck on early in the round: 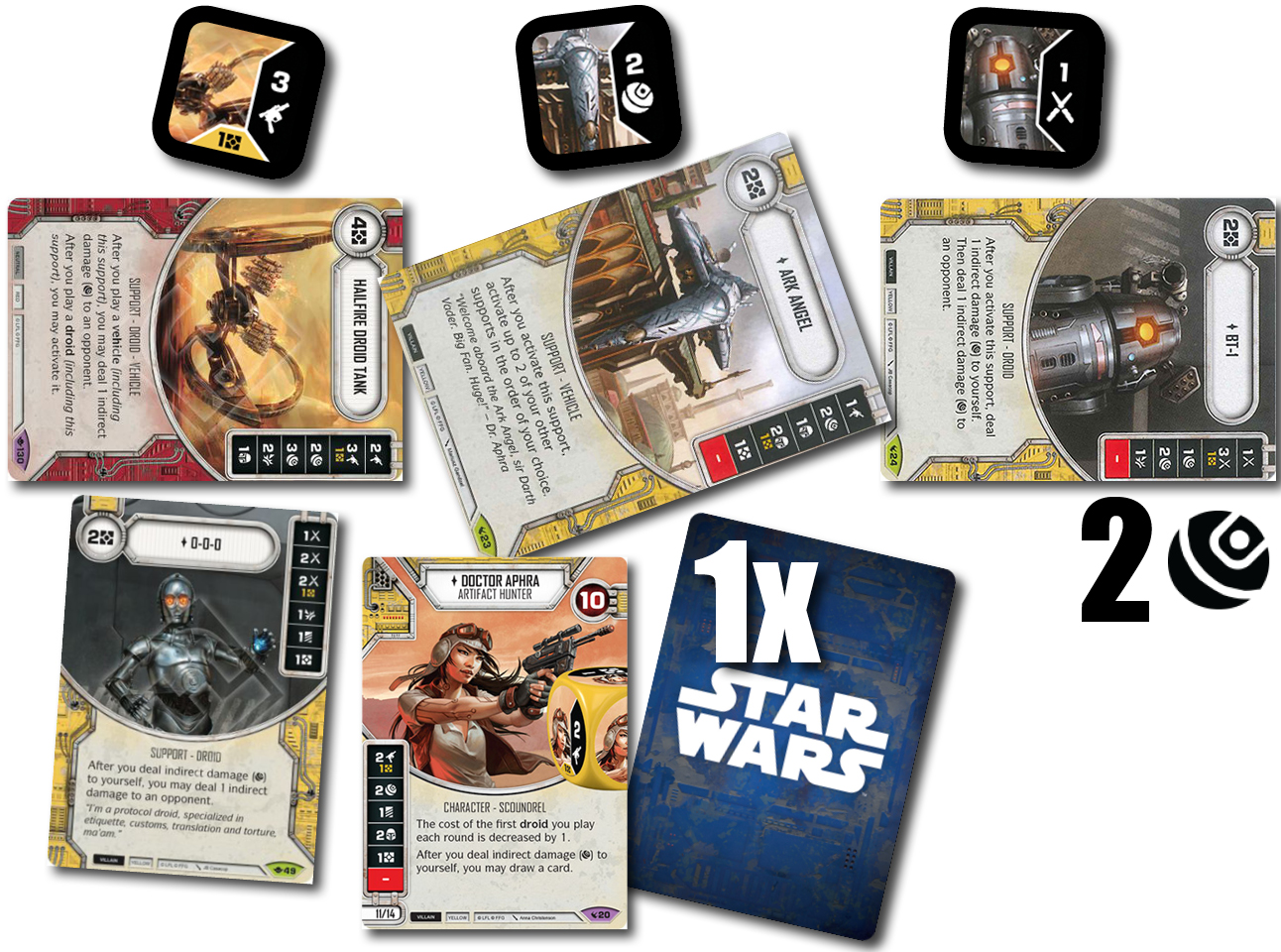 Your first action is to activate the Ark Angel, using its ability to also activate the Hailfire Droid Tank and BT-1, resolving 2 Indirect damage to your opponent, and 1 to yourself (with 0-0-0 on the table), and then drawing a card is immense, and leave 3 dangerous dice in the pool that your opponent has to deal with.

Using TESTING PROCEDURE takes this one step further and allows you to select another support to roll in, with the benefit that if either hit damage you gain a resource for your trouble (and both the Hailfire Droid and BT-1 have 4 damage sides respectively, while most of your other supports have 3. The odds for hitting a damage side on EITHER the Hailfire Droid Tank or BT-1 is: 89% (32/36)). 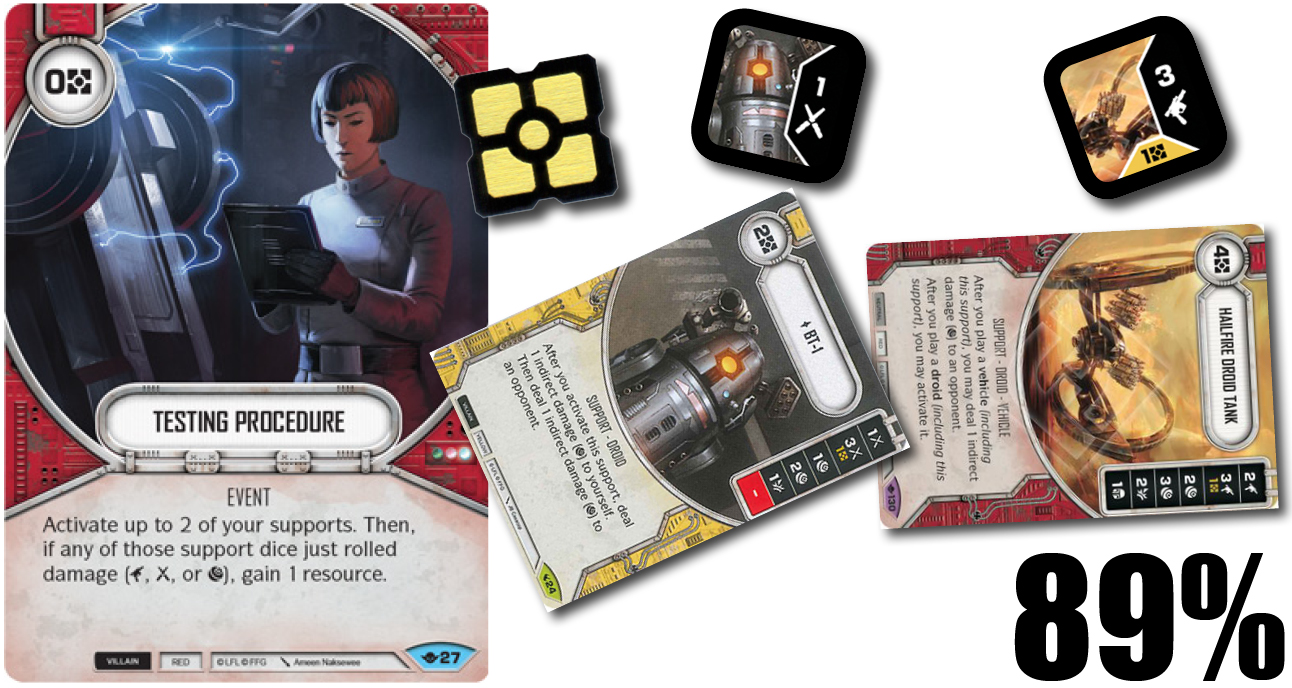 The three other vehicles in the deck are more of a work in progress: KYLO REN'S STARFIGHTER has been there a while and has done good work versus mono-decks, especially with an early Ark Angel activation to get its dice into the pool. The ARC-170 STARFIGHTER could easily be interchanged with a Fang Fighter or similar and COUNT DOOKU'S SOLAR SAILER is a late addition to the deck, to be played in the late game where the Focus sides are much more deadly.

No one wants to take damage, but if you are going to then CRASH LANDING is a great card, it’s free, it removes a opponent’s damage dice and allows you to allocate that damage to yourself as indirect damage which allows you to put the damage where you want it and not where your opponent does.  And because you are dealing the damage to yourself, you draw a card if Aphra is still around and if 0-0-0 is out your opponent gets an indirect for his troubles. Removing the single base damage dice your opponent is showing when he is sitting on a load of modifiers is just the best feeling.

UNDER ATTACK from Way of the Force goes one farther than this, it may cost a resource but it can affect any number of your opponents damage dice and remove them in the same way, deal indirect to yourself, rinse and repeat.  And if you happen to have a BUBBLE SHIELD in play, you know where this indirect is going to end up.

Also from the latest set, BY ANY MEANS allows you to remove any dice of value 2 or greater, just what you need for that Planetary Bombardment, and again forces you to deal an indirect to yourself – you know the drill by now. 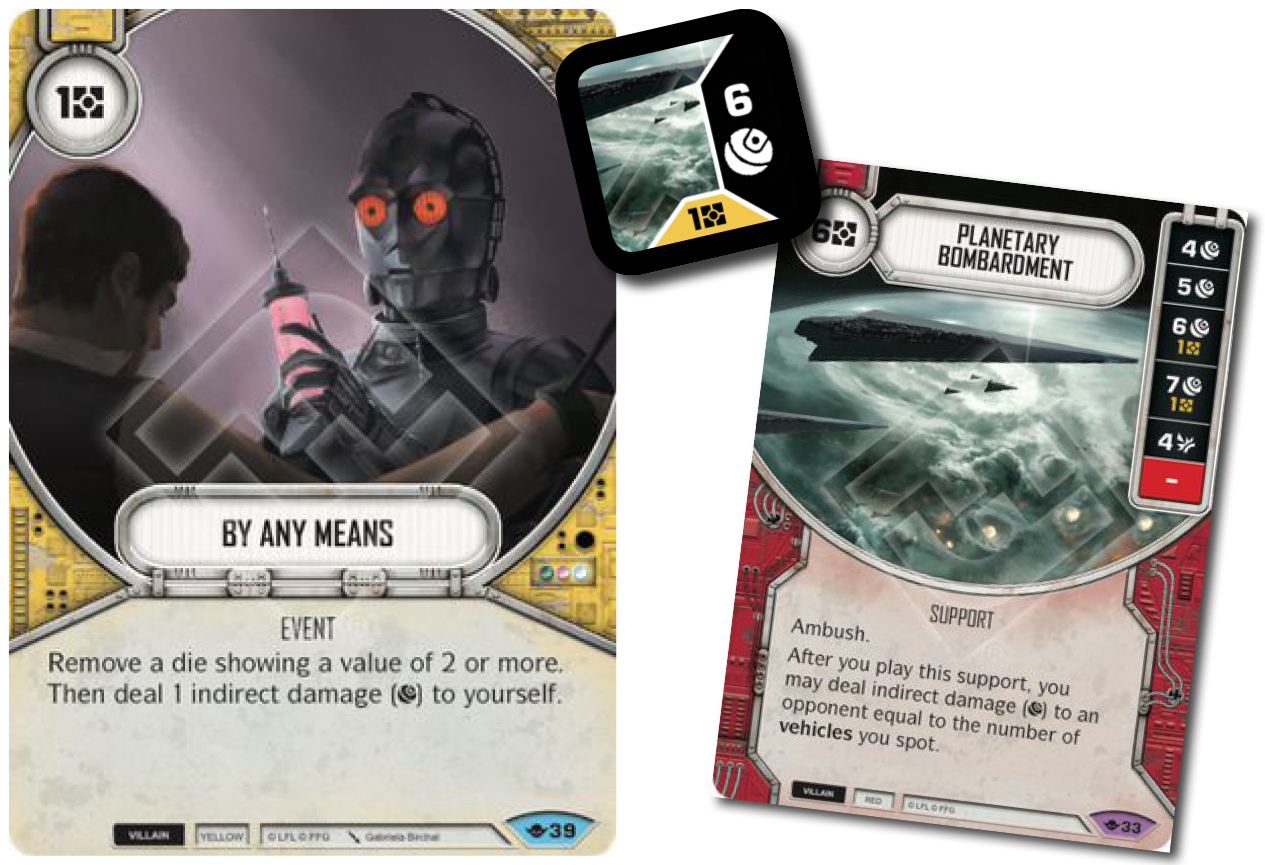 THE BEST DEFENSE and HE DOESN'T LIKE YOU are just plain good mitigation cards allowing you to either divert damage or remove the most threatening die in the pool. 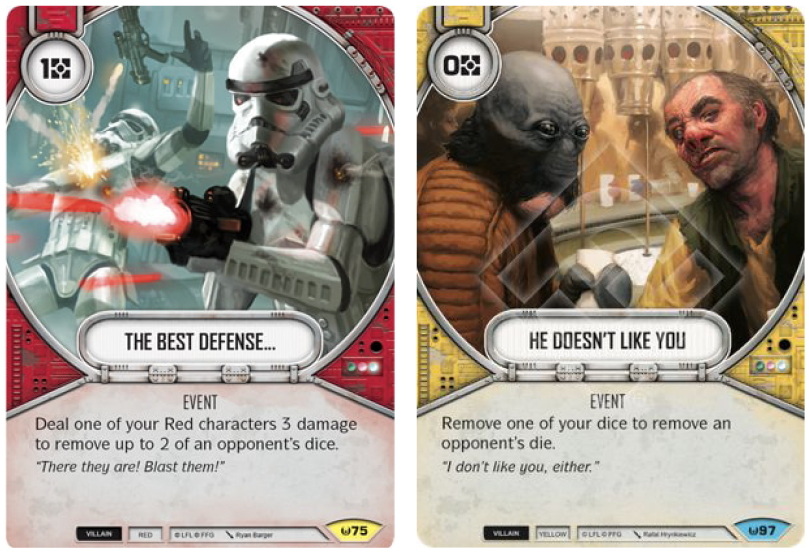 I talked about REPROGRAM earlier, basically if you have Reprogram and a droid in your hand, play Reprogram and the cost of the droid is reduced by one. Combined with Dr. Aphra’s ability, this can see 0-0-0 or BT-1 go down for free or a Hailfire Droid Tank for just 2 resources.

TESTING PROCEDURE I have also mentioned, which is an almost guaranteed resource if you activate the BT-1 and Hailfire Droid Tank (89% (32/36)). The lowest odds are if you use it to activate Kylo Ren's Starfighter or the Ark Angel in conjunction with a Count Dooku's Solar Sailer (33% (12/36)), so that's not advisable. 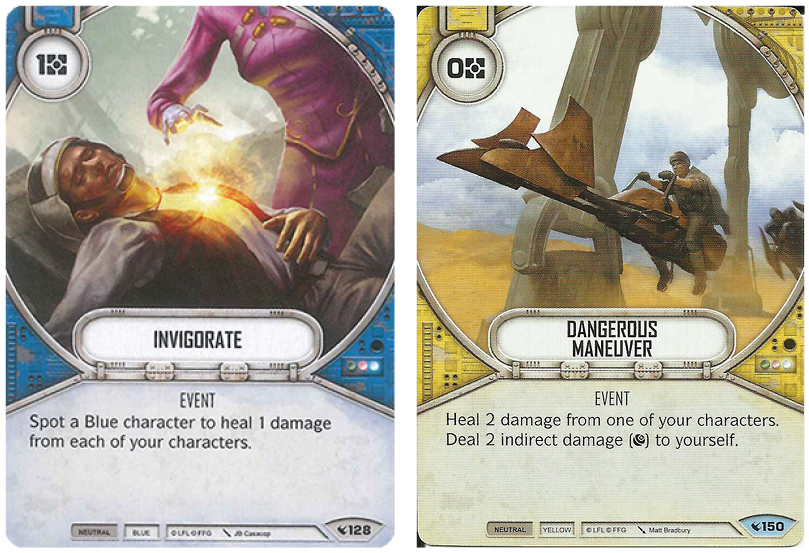 DANGEROUS MANEUVER is another card that synergises so well with the engine of the deck, heal two damage and assign two Indirect to yourself, hopefully to a Bubble Shield or at least to move it to a less vulnerable character.  This again will trigger 0-0-0 and Doctor Aphra’s abilities if applicable.

The final card in the deck is INVIGORATE, a little used blue neutral event from the Luke starter set in Legacies which allows you to pay a resource to heal one damage from each character if you can spot a blue character.  A heal of three damage for one resource beats even a Field Medic and rivals that of First Aid, and with villain healing sparse to say the least, this card has proved to be a staple (remember that you will often have damage spread across character because you deal Indirect damage to yourself constantly).
6. BATTLEFIELD:Weapons Factory Alpha is the chosen battlefield.  Firstly you are unlikely to win the roll off in with just the three dice and an average roll of 3.5 but should you happen to pull it off, the battlefield is worth a resource to you turn one, and probably of no benefit whatsoever to your opponent.  If your opponent happens to win the roll off, they’ll be taking their battlefield and giving you the shields to help block the damage from the early Snoke Power Action damage.
7. CLOSING THOUGHTS:The deck really proved itself when I took it to the Store Championship, eventually taking down the event featuring several top players. It stumbled slightly in the Final vs. Yoda/Cassian/Anakin mill and lost the first of the best of three as I got used to piloting it in a very different style versus another mill opponent. But a much more reserved style of play saw it home, with Ciena Ree the key as she reactivated the Hailfire Droid Tank 4 additional times in the closing round!!!

There’s still room for improvement with a few of the cards, but I really feel the core of the deck is there. Try it, you might like it!