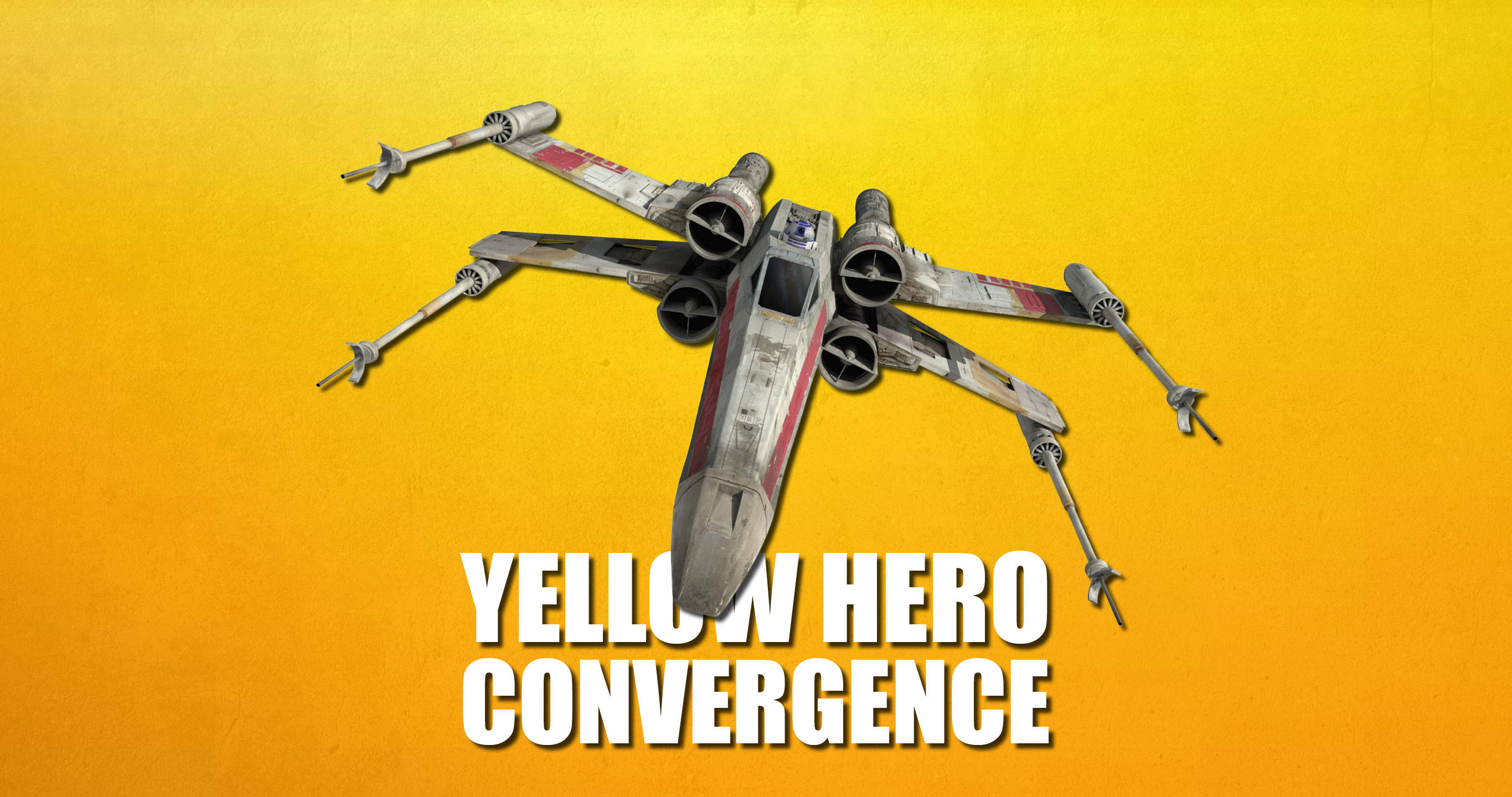 There are links to all the other parts of the set review at the end of this article!
1. YELLOW HERO CARDS:Written by LAKE QUITT

Yellow Hero received some really nice upgrades, and both Chewie's Blaster and Moxie are going to see plenty of play, while the rest of the cards looks pretty mediocre. If players were hoping for some awesome Yellow Hero characters, well ... looks like they'll have to wait for another set.
2. YELLOW HERO CHARACTERS: 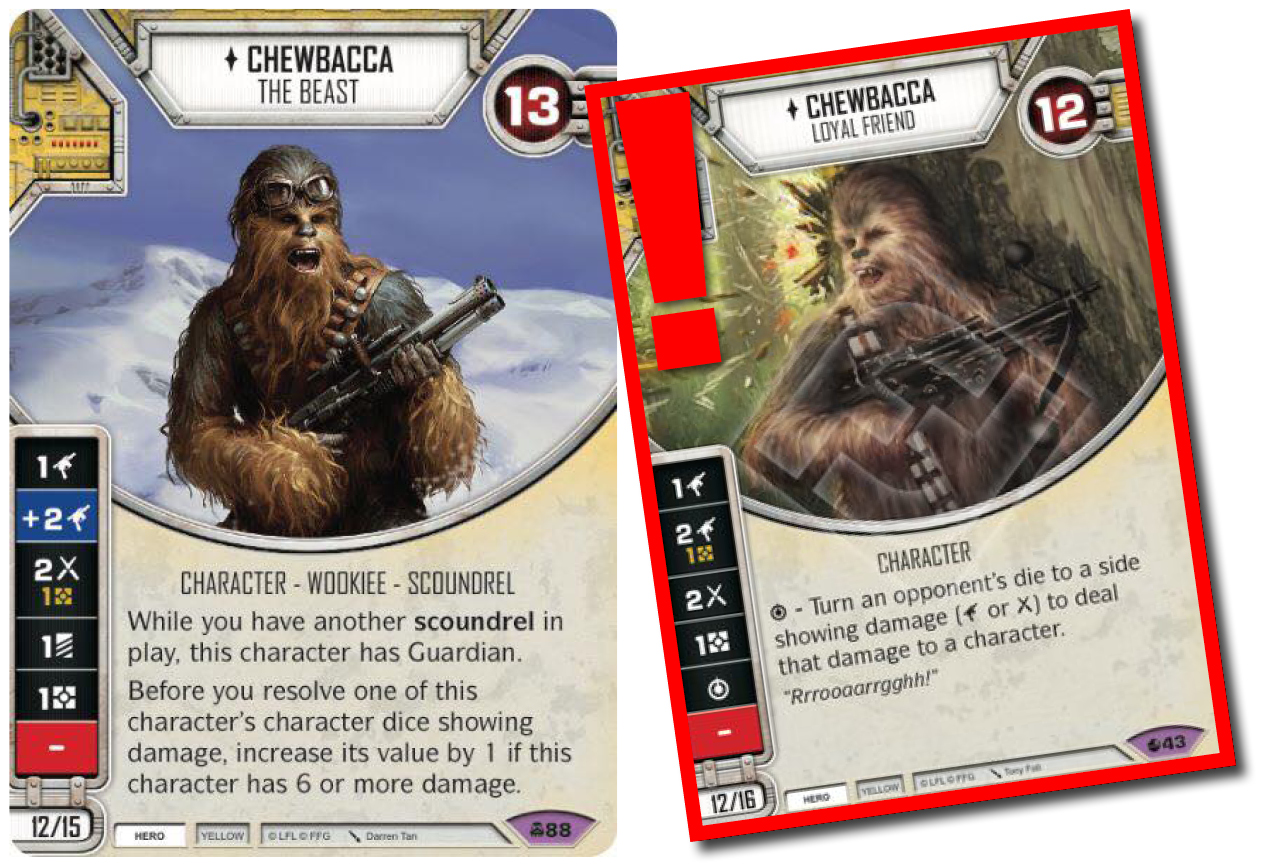 CHEWBACCA (0/5)
Why does FFG hate Chewie so much?? I think this is actually worse than the original Chewbacca (Spirit of Rebellion). I don’t even want to talk about this card to be honest. Might be all time worst Legendary.

EZRA BRIDGER (2/5)
Ezra is an interesting one. Allows you to punish opponents for claiming on you by letting you use their own dice against them is a new and interesting design space . His die is kinda weak and his health is now below average… but he might still just cut it.

MAZ KANATA (1/5)
I have spent more time that I cared to being terrorized by Maz Kanata1. That doesn’t look like it will happen again. Maz might have been fine if the opponent didn’t get first choice. Do they need to dig for something? Now they can. Did you roll too hot, or them not enough? They can fix that too. Or they can just damage you because all of those effects are pretty mediocre anyhow. At least her die is ok.

SATINE KRYZE (1/5)
I know a lot of people are high on Satine, but I’ve got a hot take for you. I think she is borderline trash. She just isn’t very high impact, and I expect this meta to be go big or go home. If we get into a grind fest well… actually you know what, nope still not buying it.
3. YELLOW HERO EVENTS:

CALCULATED RISK (1/5)
This might see fringe play with cards that are guaranteed to complete it, like say a Shadowcaster. Otherwise it’s just a waste of a slot and turn.

CONVERGENCE (1/5)
Looks too expensive to me. There MIGHT be value using it to destroy 2 cost upgrades, but trading 1 for 1 like that doesn’t seem like a winning formula to me. Also vandalize is still a thing. 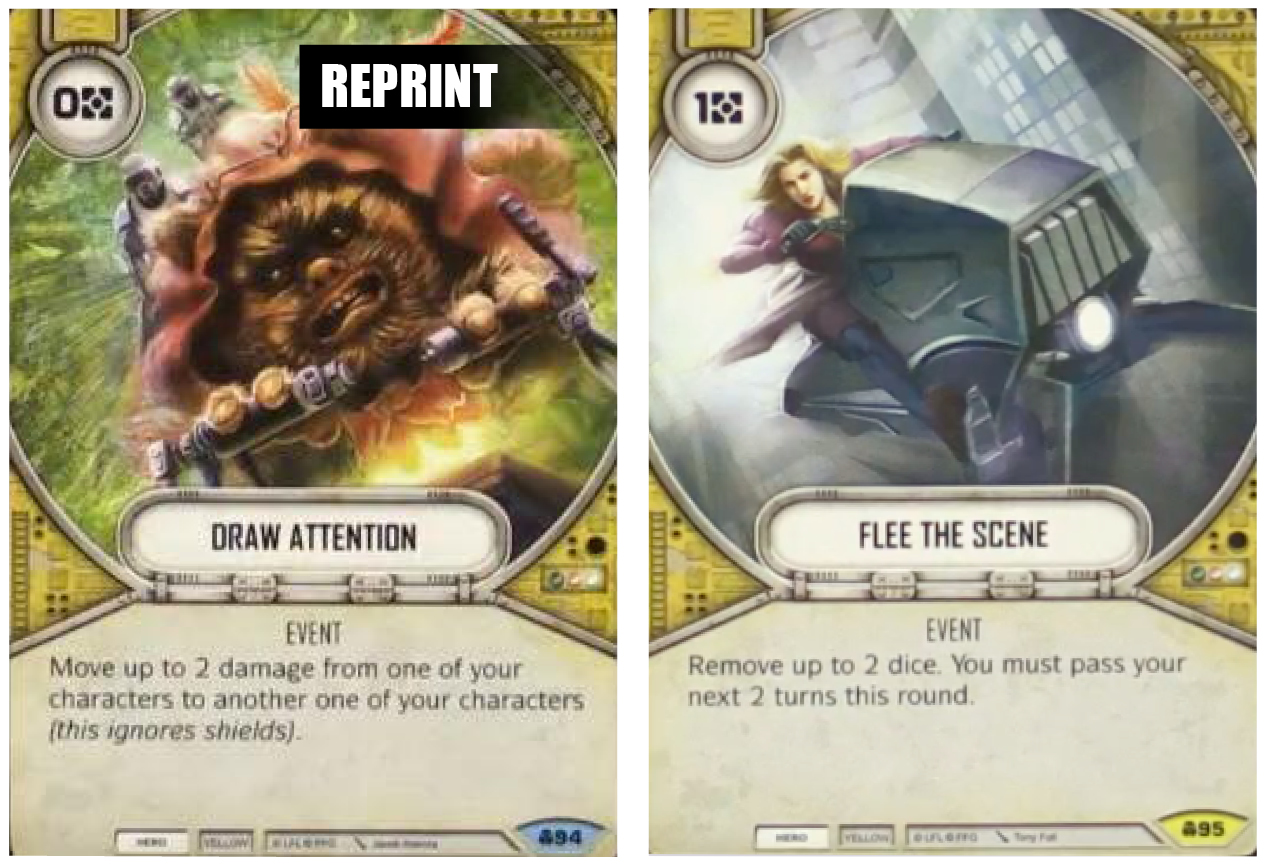 DRAW ATTENTION (1/5)
It might see play, but I don’t like cards like these. They don’t actually do anything, they just slightly spread damage out more (unless you're killing off L3-37 or moving damage to Chewie)!

FLEE THE SCENE (3/5)
The reset potential is pretty serious and good opponents might stutter around this effect, but I think it will actually be good enough to play as long as you do it early. Removal that's '2 for 1' is pretty hard to pass up for just a single resource. 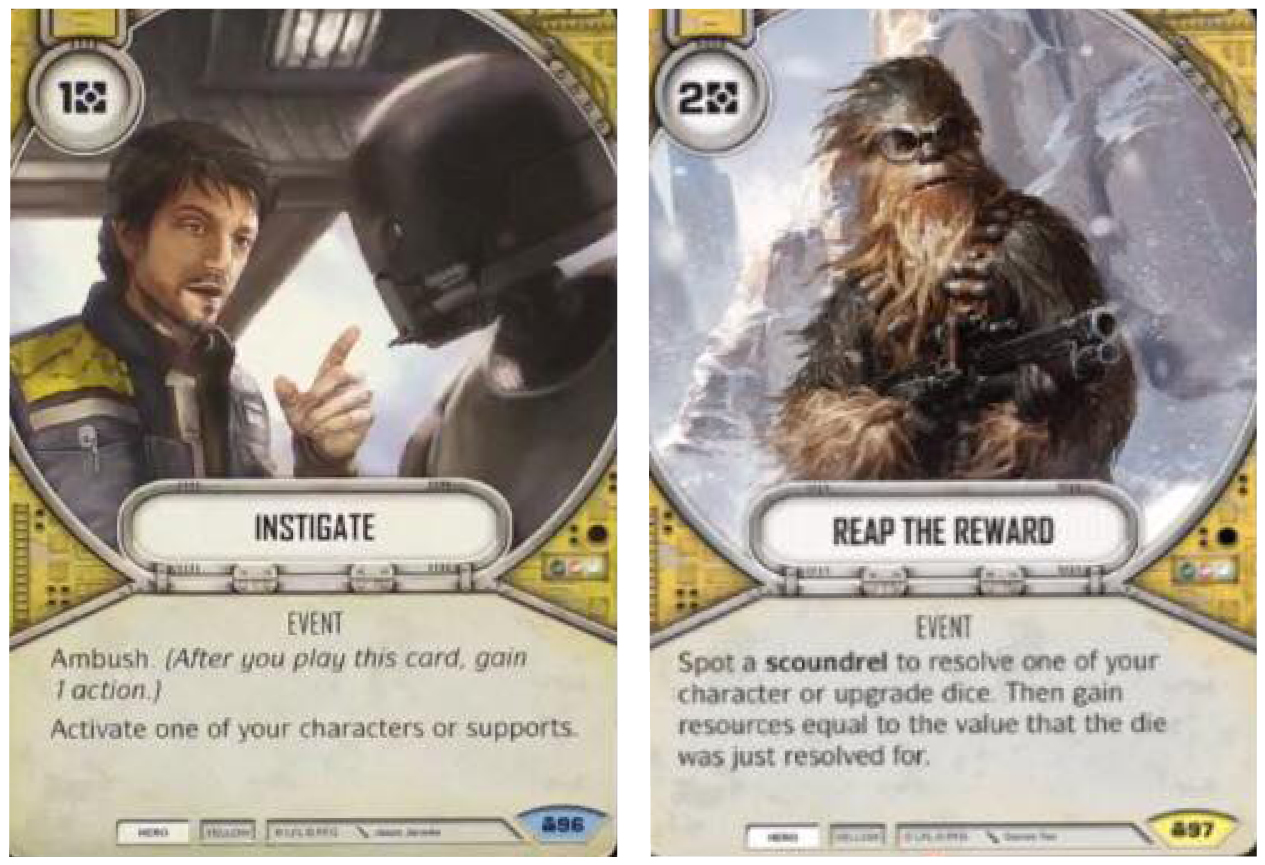 INSTIGATE (5/5)
Look, we all know how good Hit and Run was. Paying 1 for the same effect is going to be almost just as good. This time it’s actually in a color that makes sense too.

REAP THE REWARD (1/5)
So this looks sweet but I actually think it’s a trap. You’ll have to resolve a die showing 4 or more for no cost for this to be worthwhile and off the top of my head I honestly can’t think of a meaningful amount of cards that can do that. 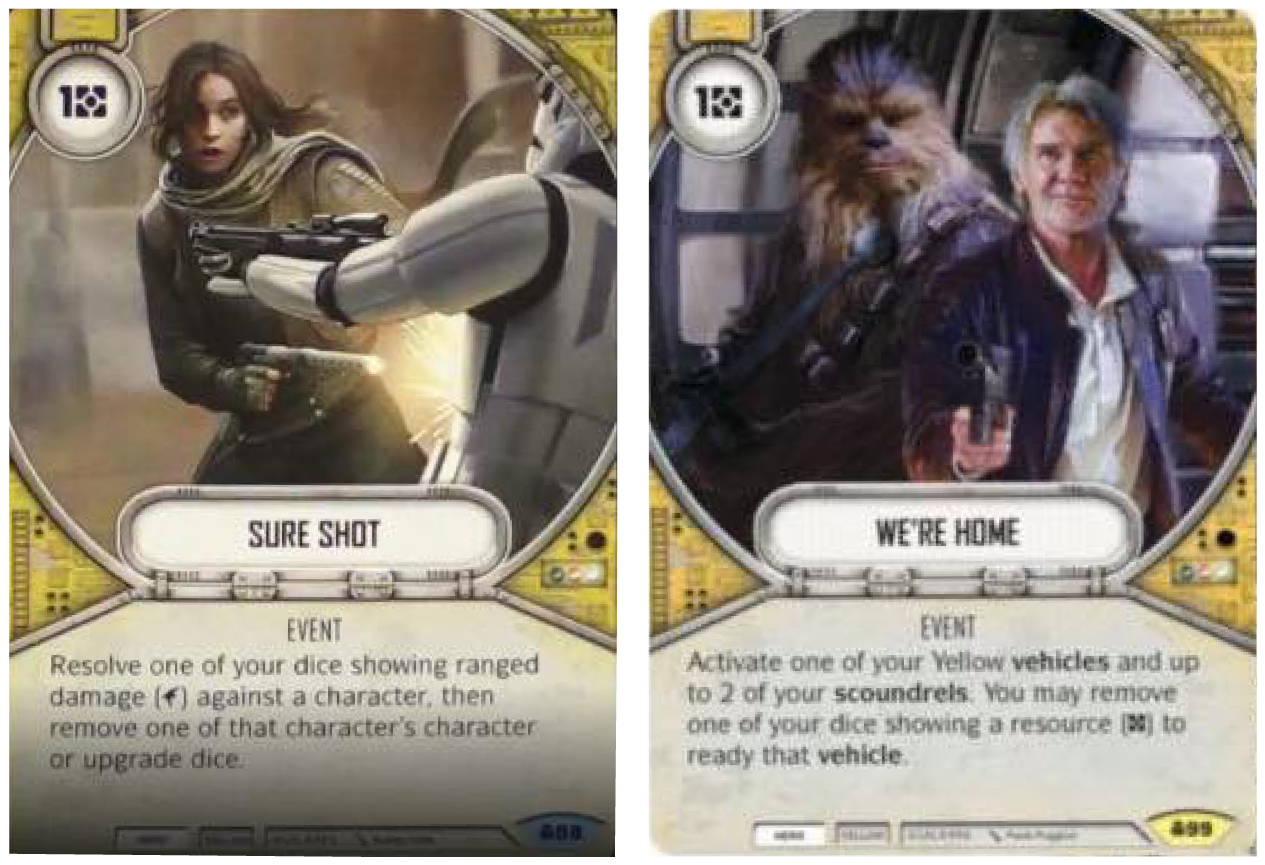 SURE SHOT (4/5)
Solid removal in a guns deck. Generally you are shooting at the biggest threat so its limitation isn't really a big deal either.

WE'RE HOME (1/5)
Way too high variance for me, I’ll pass and keep my sanity by not getting sacked when my double scoundrel vehicle deck can't find resources.
4. YELLOW HERO SUPPORT: 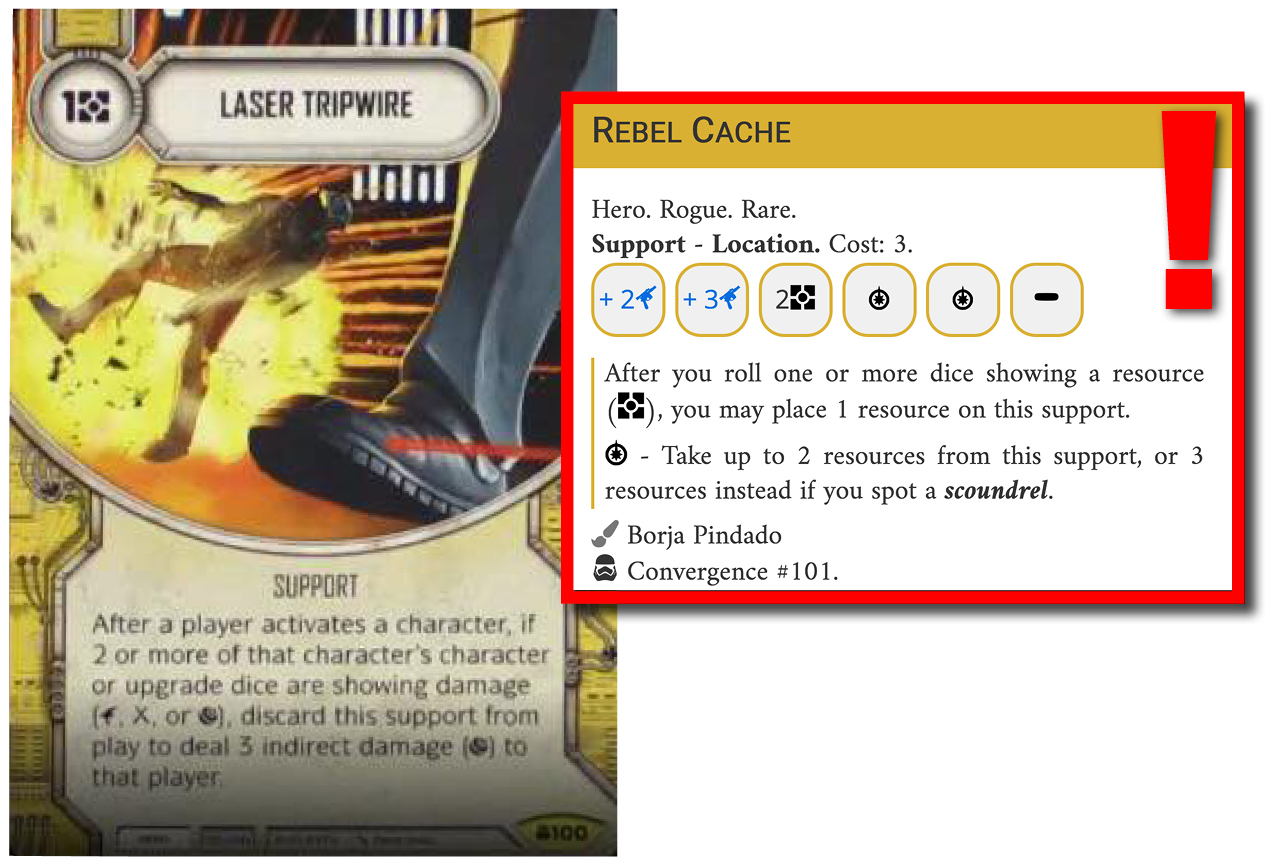 LASER TRIPWIRE (4/5)
3 damage for 1 resource is above the going rate (2 for 1 was the established rate), so this card might see some decent play.

CHEWBACCA'S BLASTER RIFLE (5/5)
Now Chewie’s blaster on the other hand… just wow. We all remember how good FN was right? This thing can pound in reasonably for up to 7-8 damage in one turn. That is insanity. I would recommend against trying to get the last part to work, it will probably just make your deck worse. 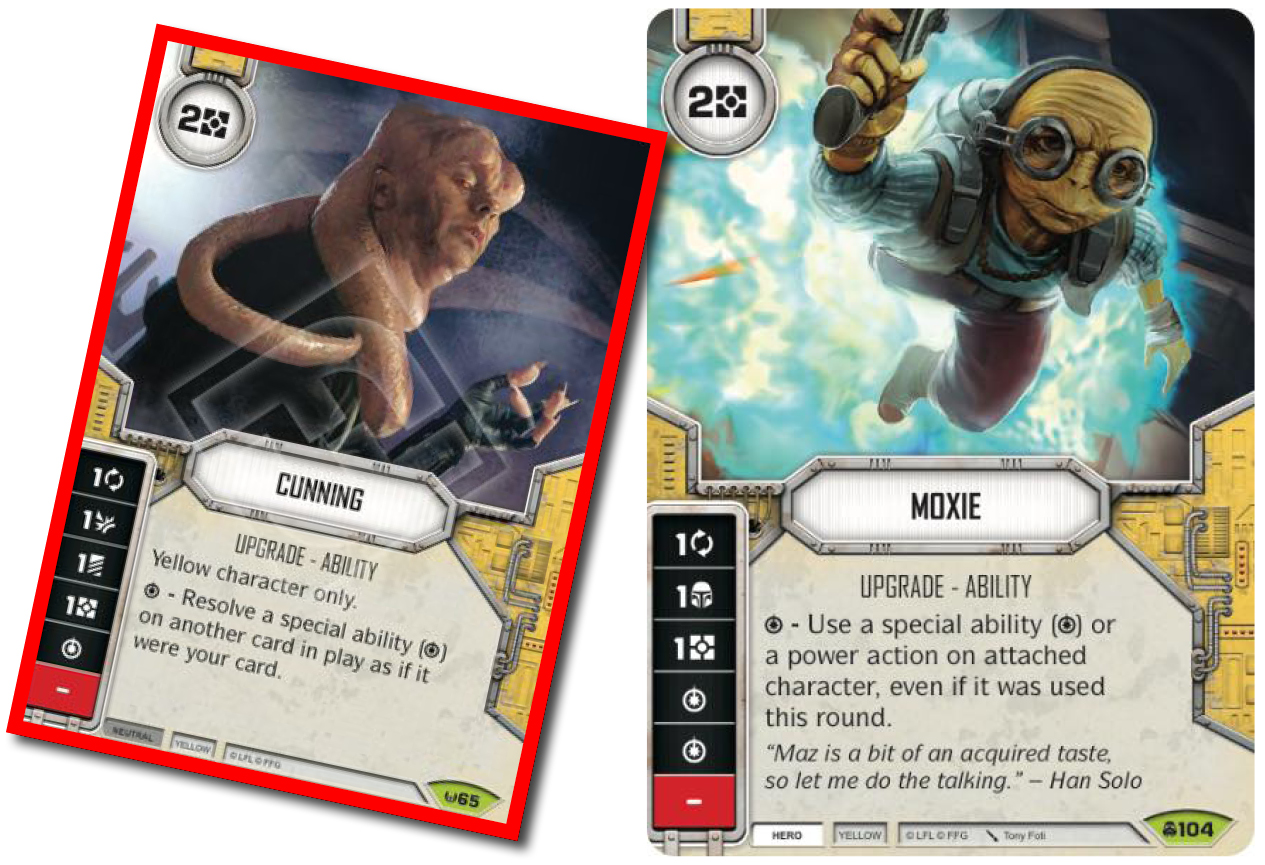