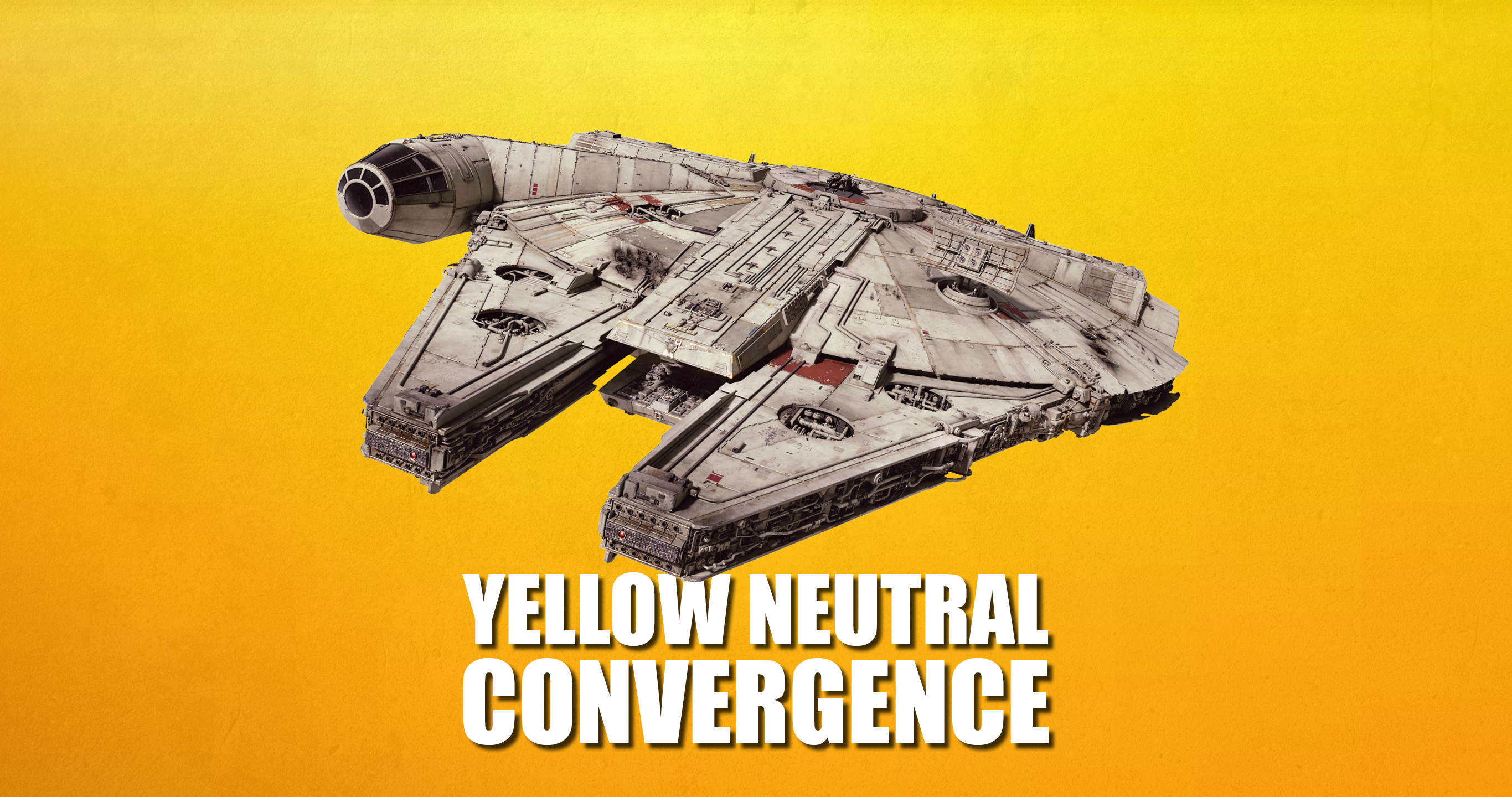 There are links to all the other parts of the set review at the end of this article!
1. YELLOW NEUTRAL CARDS:Written by LAKE QUITT

Enfyst Nest was supposed to be the big star of Yellow Neutral in Convergence, but it looks like she is going to be outshone by a good package of staple events instead. Other than that it actually feels like Yellow Neutral got a bit shafted in the set.
2. YELLOW NEUTRAL CHARACTERS:ENFYS NEST (3/5)
Hah! I knew she would be Neutral not Hero. Also, as a side note I was kind of expecting Enfys to come out last set. She is kind of hard to get a proper read on. 18 points is a lot, and she has that dreaded 1 damage side that is pretty much a blank at that cost. On the other hand she has a 3 damage or 2 resource side she can resolve for free, and is a direly needed Yellow Melee character. Her Power Action will occasionally link up with Hired Muscle and the Marauder, but unfortunately not much outside of those! 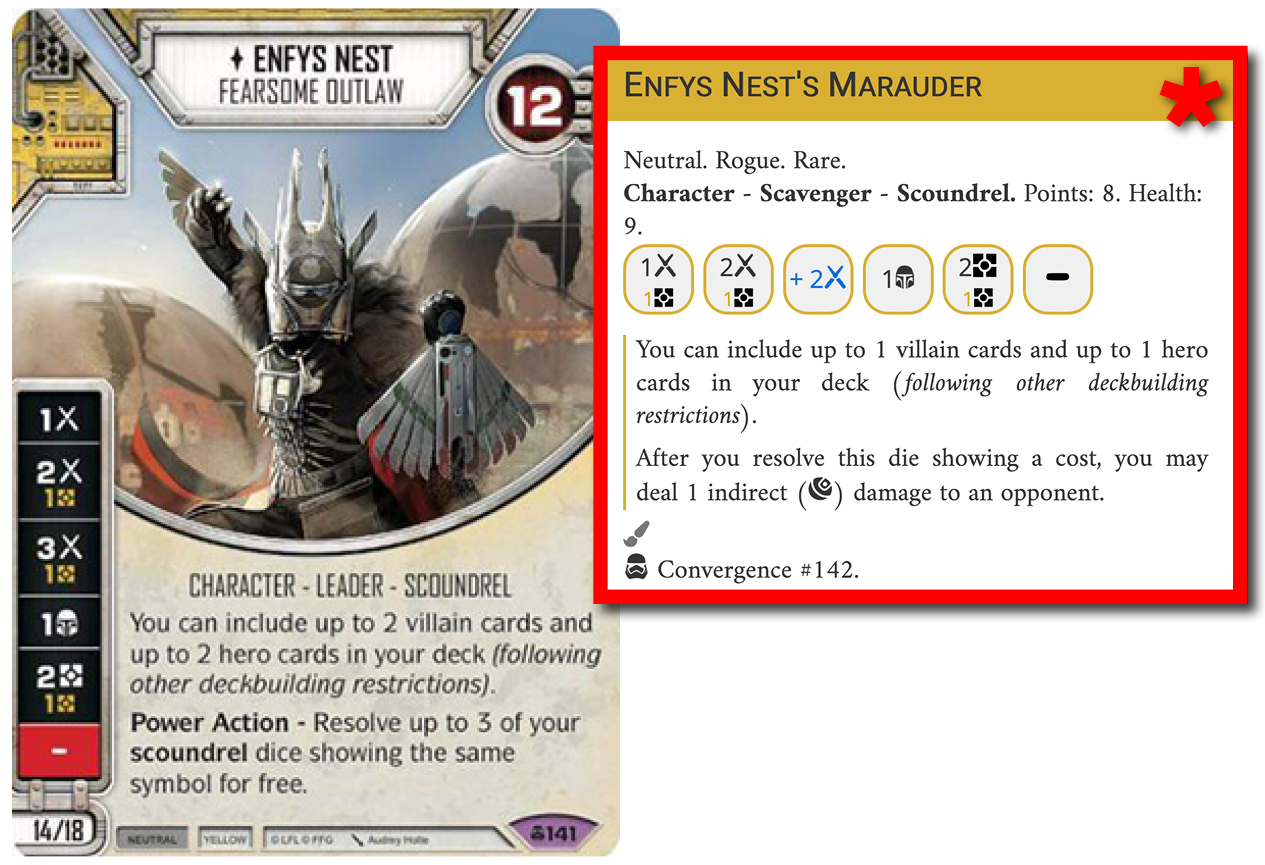 ENFY'S NEST MARAUDER (2/5)
Honestly I am most interested in the passive ability to add cards from other factions here. Pay sides hurt, but 9 hit points for 8 points meets the current going rate for acceptable value. This is tough to call, but I’m going to say they are bad. It’s going to have to fall on the shoulders of whatever they are adding to the deck to fix the problem, but I don’t see it happening. I will say that they are mostly a nifty way to add Yellow to Melee decks.
3. YELLOW NEUTRAL DOWNGRADES:

WANTED (2/5)
Downgrades are currently hard to evaluate. This one seems pretty slow though right? Maybe these pick up in value if decks with low HP characters start to show up. If you draw this while they only have 1 character left… nice resources bro?
4. YELLOW NEUTRAL EVENTS:

ELECTROSHOCK (4/5)
Welcome back old friend. Electroshock got outpaced as time went on by other removal last standard cycle, but seeing as how removal has been overall toned down I think it going to do just fine (the image used is of the old Electroshock)!

PREY UPON (2/5)
Green is always up for good removal especially ... erhhh wait whoops wrong game! If Downgrades are good enough to see play in large numbers this will be premium removal. I think Hampered is disgustingly powerful, but we are scraping to find playables after that. 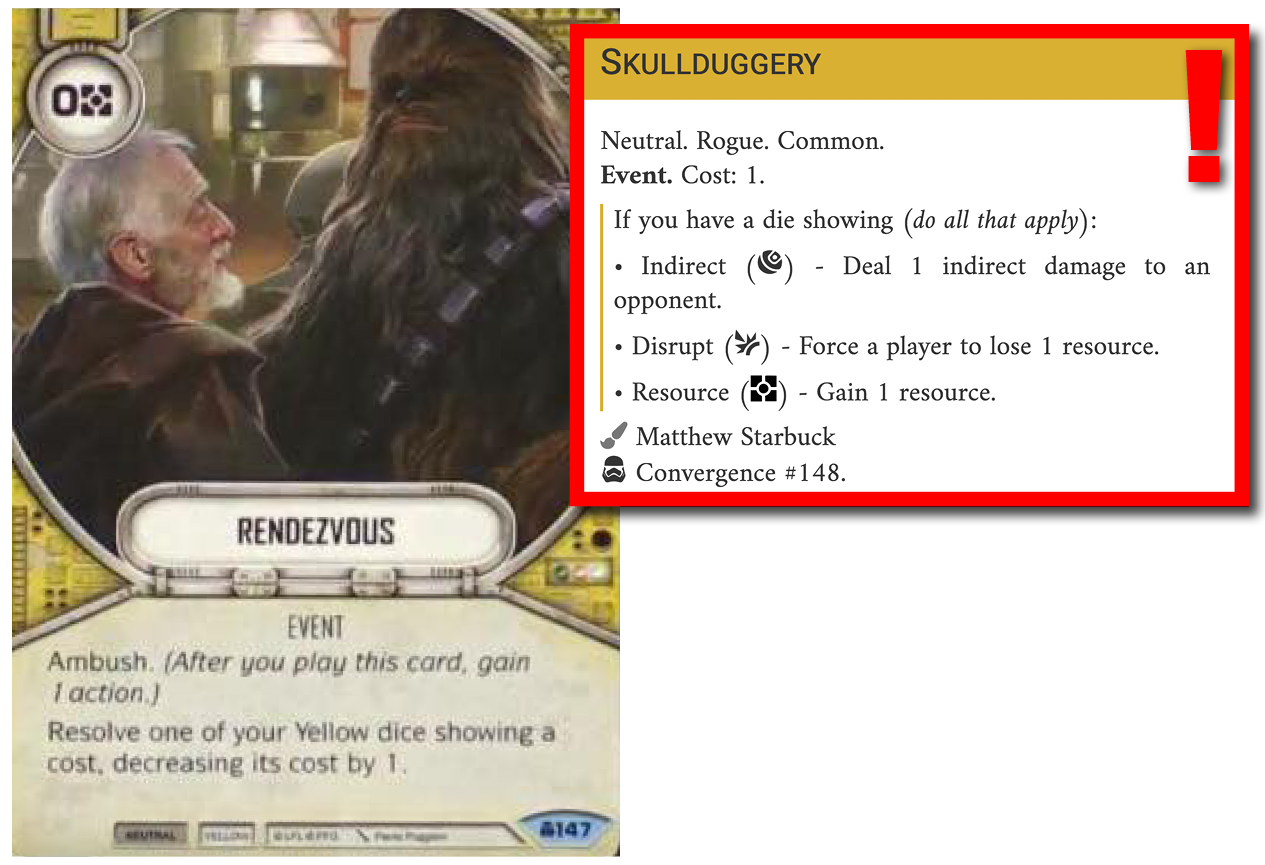 RENDEZVOUS (4/5)
Cards like these are super hard to get a good fix on. I like it though, it has the potential to be a one-sided truce and honestly Yellow has no shortage of costed die sides. As long as we can get Yellow (with costed sides) playable this should be solid.

SKULLDUGGERY (4/5)
I think this is deceptively good, doubling up on those effects is solid value. I haven’t messed with any character pairings yet but really the value is in hitting Disrupt and Resource and that shouldn’t be too hard to do. 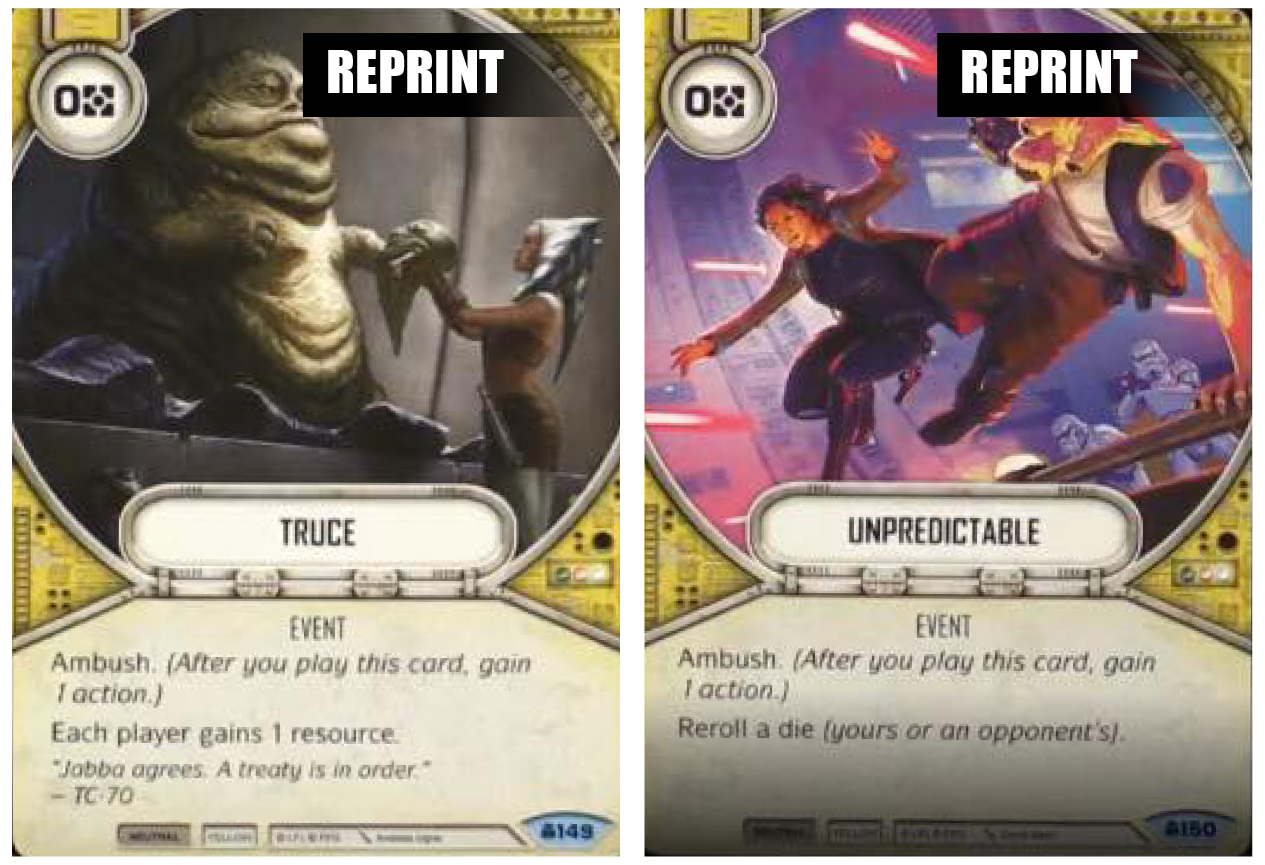 TRUCE (5/5)
I love me some Truce. I think its an incredibly well designed card for Destiny. It’s higher skill capped than it looks, I’ve definitely seen bad players just give resources away from free. Pro-tip: Don’t empty Truce. Ever. This card is sure to see plenty of play, but it’s not perfect for every deck. The ones that want it will love it though.

UNPREDICTABLE (0/5)
I mean, this card IS playable, but I think it’s skill ceiling is too low for even decent players to consider. It’s basically just a way to randomly spike (or more likely fail) damage in here and there, and you can do better than that.
5. YELLOW NEUTRAL SUPPORT: 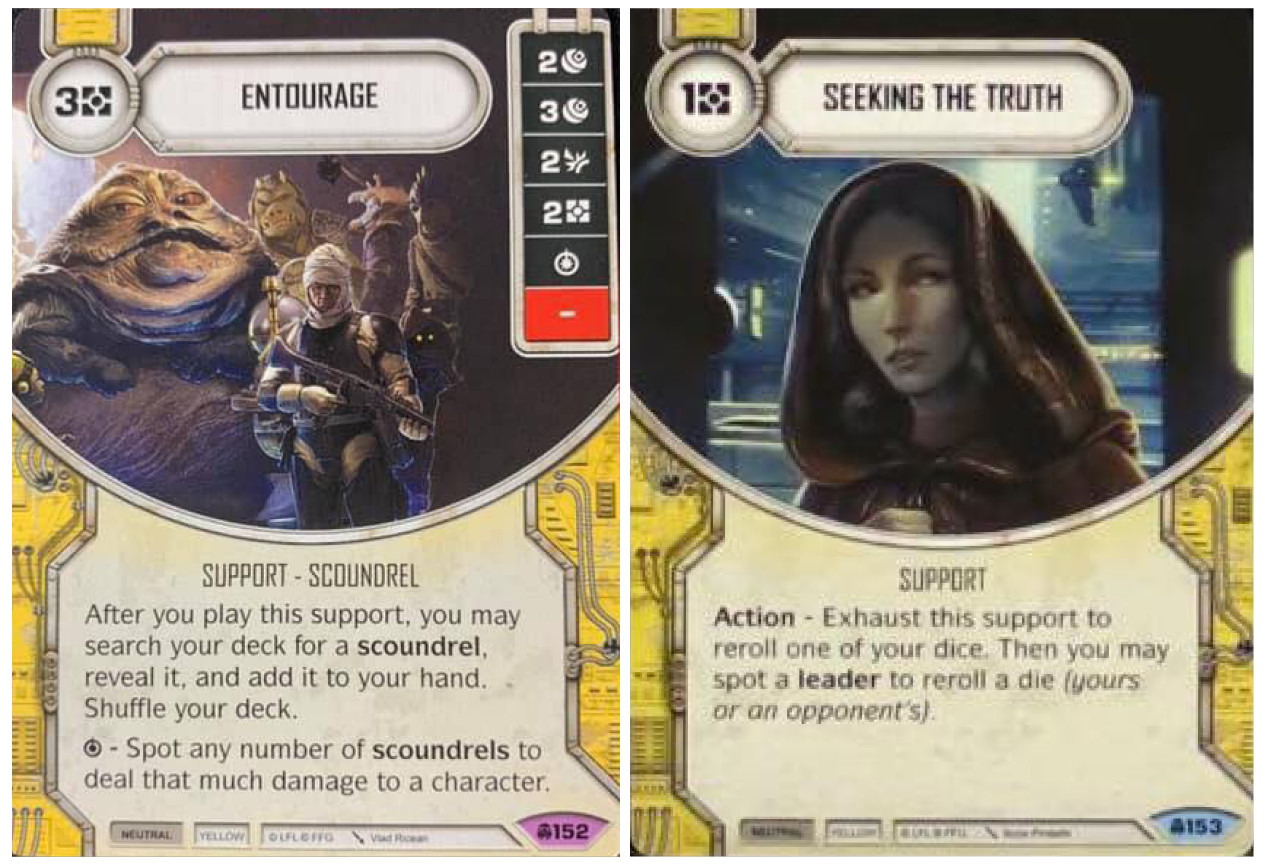 ENTOURAGE (4/5)
Seems fine? There are a lot of powerful cards now, the question is would you rather play this and whatever it tutors or would do you want to save another resource or two for something splashier? I want to give this a 3, but I think the tutor effect will bump it just a little higher 4/5

SEEKING THE TRUTH (0/5)
I really don’t like supports that reroll dice. Obviously the solution is to just roll better! Or, you know play better cards in this slot so you aren’t as dependent on your dice. 0/5

SMUGGLING RING (0/5)
2 resources is just too much for this to be good. It will take 2 activations just to recoup the initial cost. 0/5 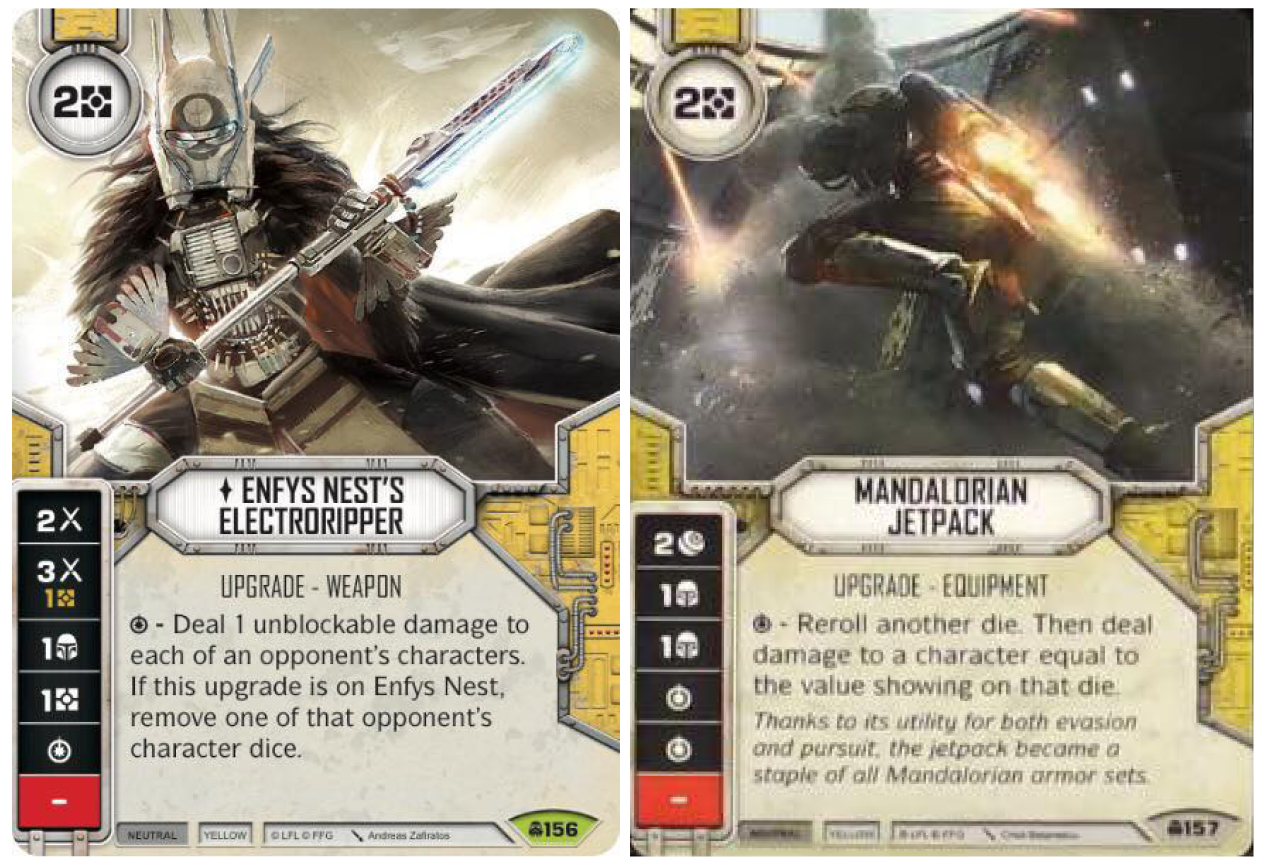 ENFYS NEST'S ELECTRORIPPER (3/5)
This probably will depend on Enfy seeing play for it to see play, as the special is prettly lackluster without her, but potentially solid with her. I do like that it only costs 2, but it lacks redeploy and the sides are not great. I’m going to give it the same rank as Enfy because I think if Enfy sees play this will. Also she can easily make that 3 for 1 Melee side free.

MANDALORIAN JETPACK (1/5)
People are going to have fun with that special in Jank Brews, but for serious games this one is a miss. 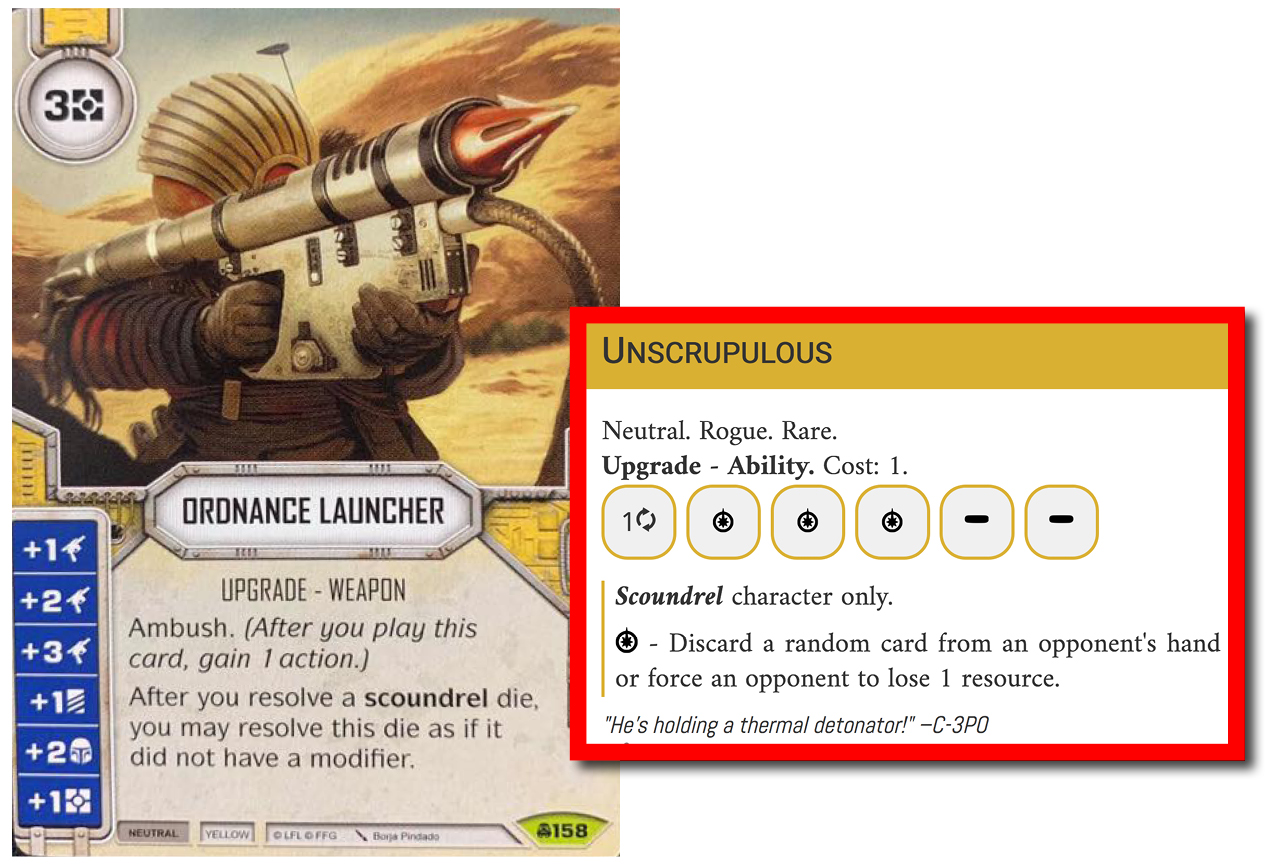 ORDNANCE LAUNCHER (0/5)
Eiffel 65 anyone? Blue sides are always a liability, and this thing literally only has blue sides. Also none of them are even that good? The only use this card would have is by things that abuse ambush, but those just all rotated. 0/5 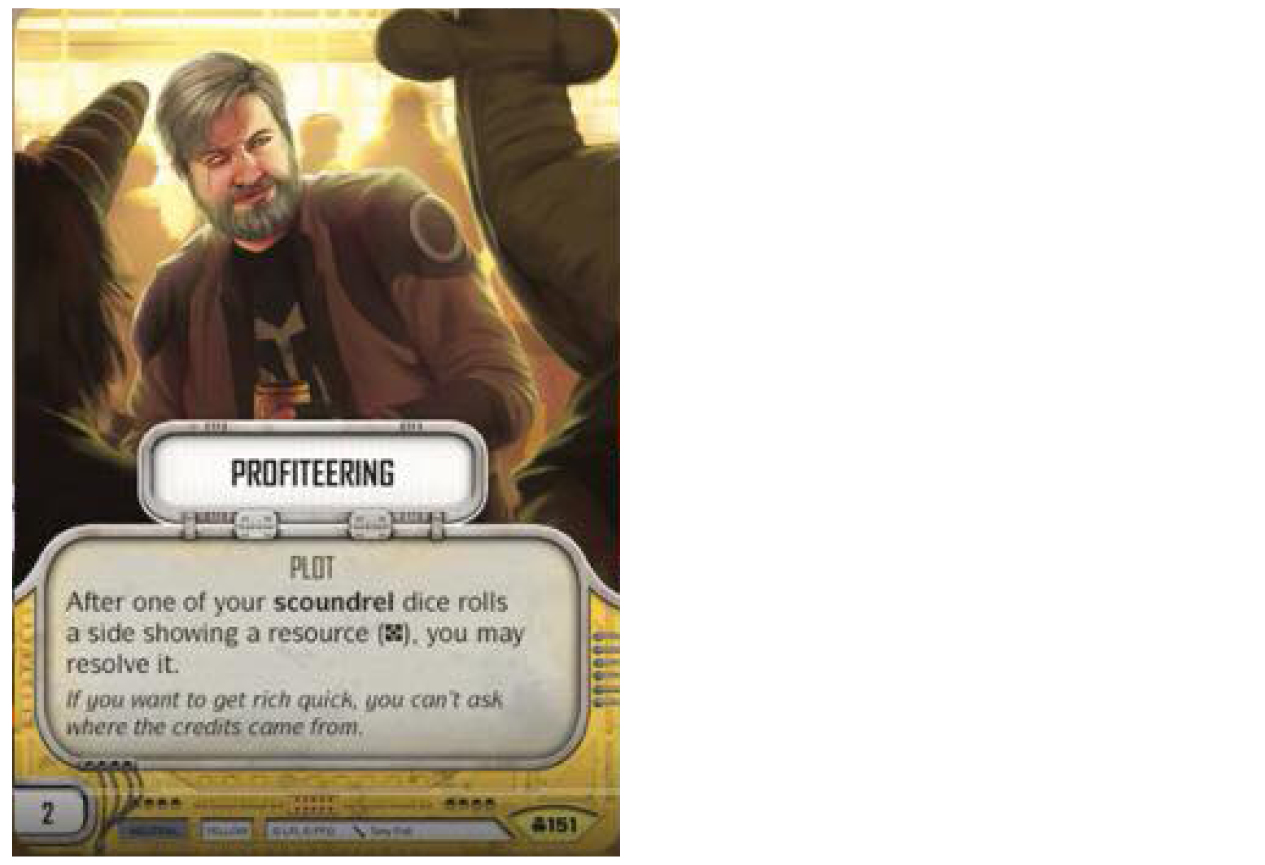