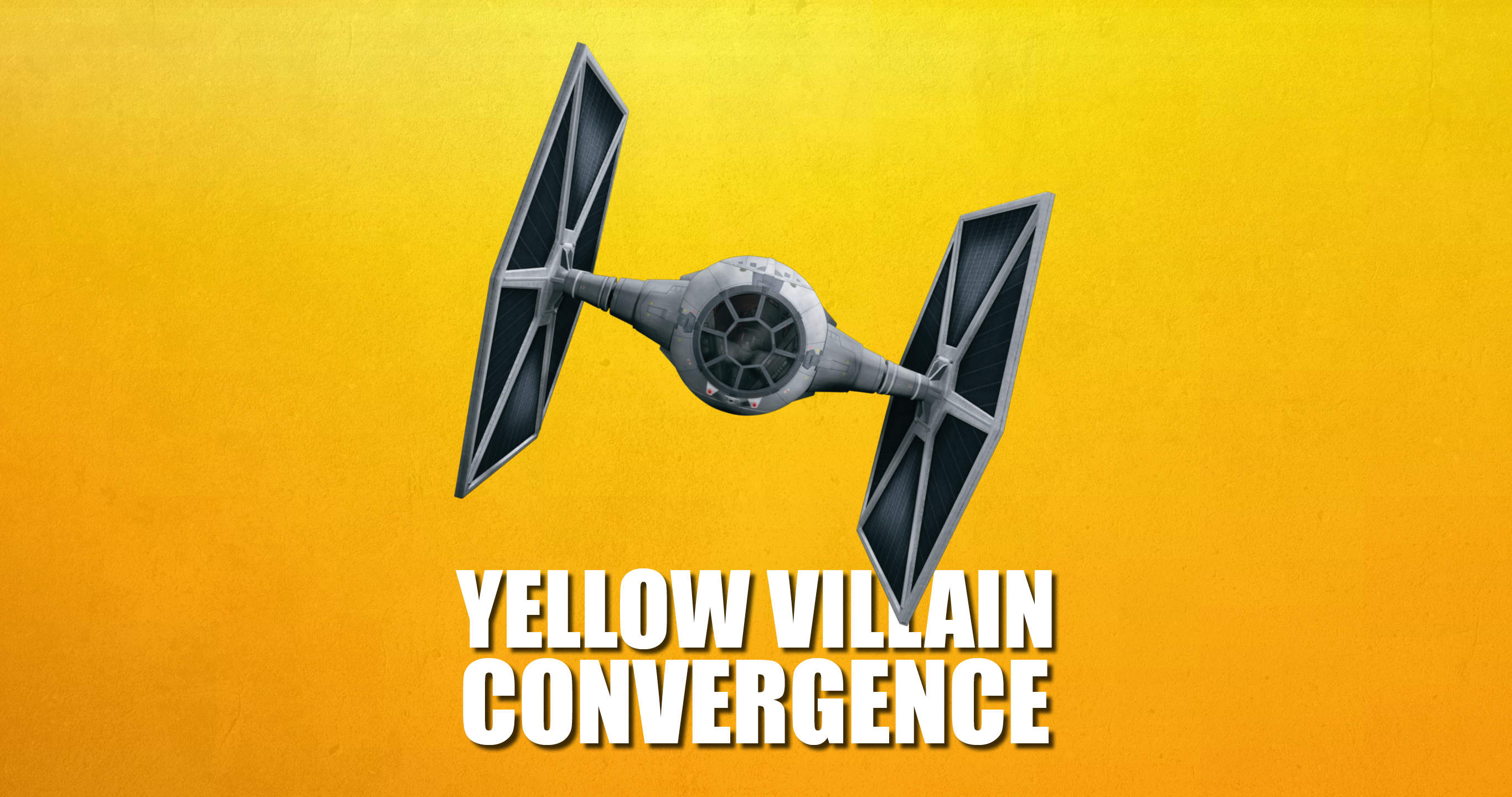 There are links to all the other parts of the set review at the end of this article!
1. YELLOW VILLAIN CARDS:Written by LAKE QUITT

There might still be hope for Jabba the Hutt and Watto, but the theme of the day seems to be Downgrades and Bounties, and until we know how good that's going to be, then Yellow Villains are going to be in a limbo. Oh ... and they also received what is possibly the worst legendary of the set (and it's even a reprint).
2. YELLOW VILLAIN CHARACTERS: 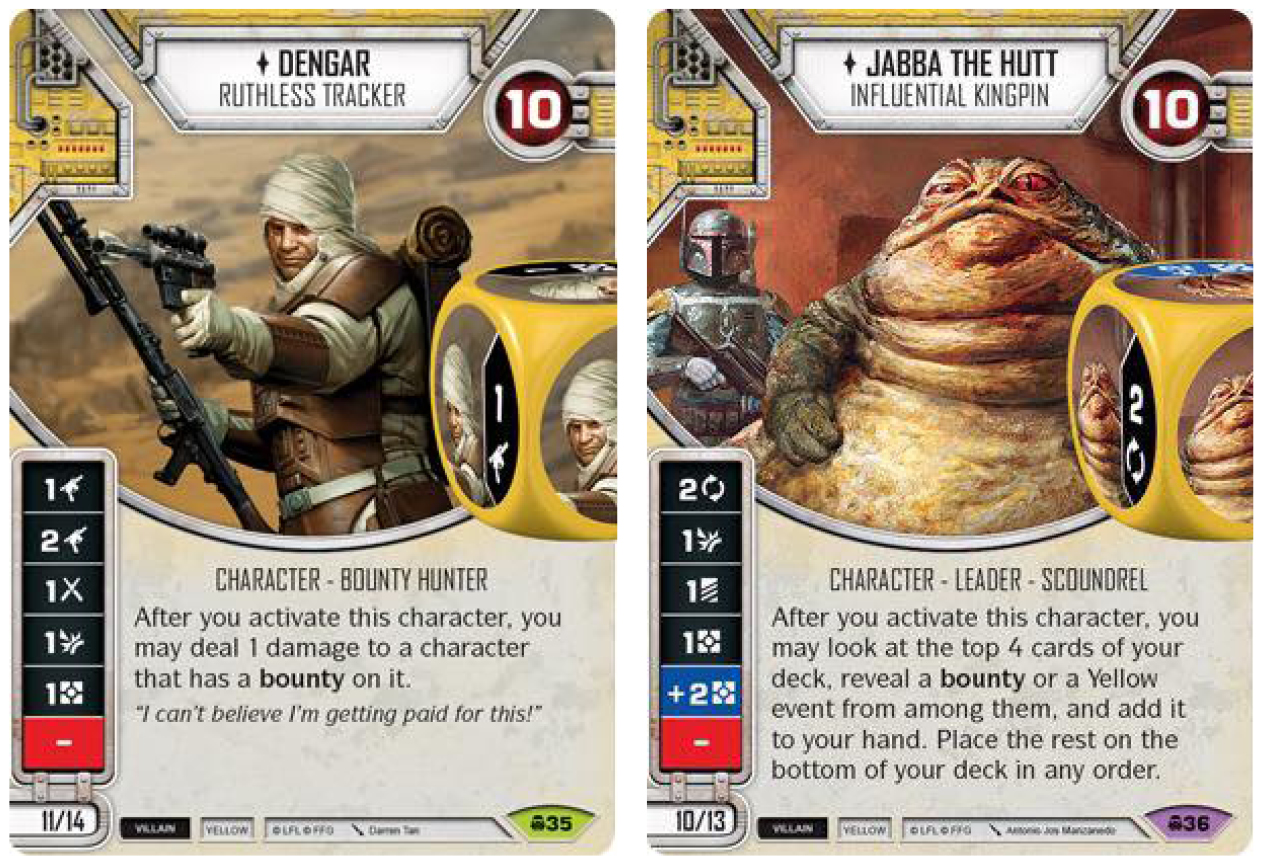 DENGAR (0/5)
The PERFECT character for your Bounty deck. Just kidding! Save a life, don’t play Dengar.

JABBA THE HUTT (3/5)
Jabba’s activation effect is more what I am shopping for if I am going to play a Bounty deck. A lot of the bounties seem to be low impact, but if I can add them to my hand for free, well then that just might be good enough. 2 Focus is a solid side for a support character, and I can even see the +2 resource side being good. It also helps that Jabba is pretty cheap at 10/13e. On the flip side he has some power tied up in the unproven Bounty strategy, and he has fierce support competition in cards like Grievous3 (red) and Snoke (blue). 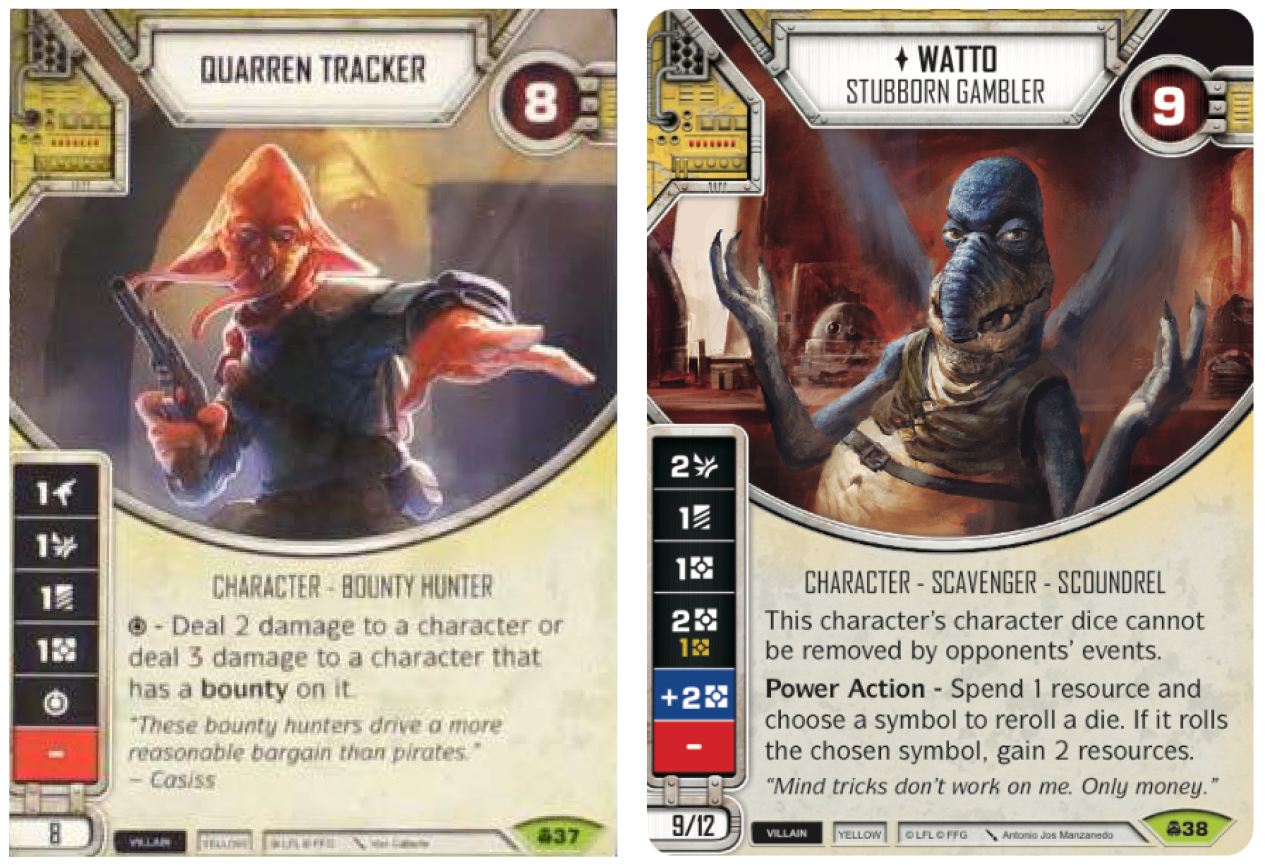 QUARREN TRACKER (0/5)
The Special is nice in a Bounty deck. Okay, I’m out of good things to say now.

WATTO (3/5)
Is Watto actually a Villain? I would figure he would be Neutral. I think Watto is decent, his main competition is in Jabba3. He looks like a better resource engine, thanks to his dice being essentially unremovable. While he lacks the Focus side, I honestly think the 2 Disrupt is a fine side. The Power Action should break exactly even over a large sample size which means, it can both screw you or reward you in smaller sample sizes. It’s probably fine as a Hail Mary, but I
wouldn’t get to crazy with it if you are ahead or even.
3. YELLOW VILLAIN DOWNGRADES: 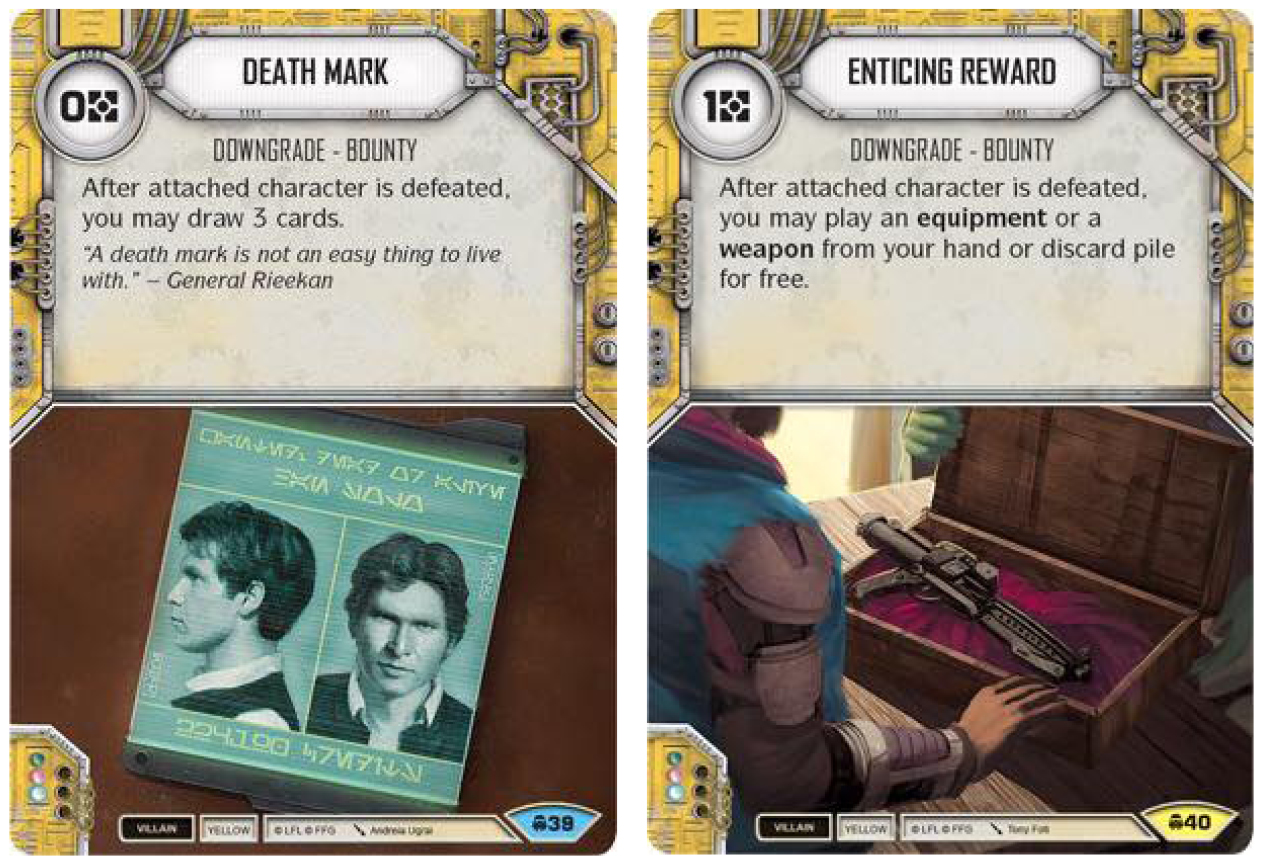 DEATH MARK (2/5)
This is basically only good in that it costs 0 and that might help enable Bounty/Downgrade strategies. Card draw, especially late is not the most powerful of effects.

ENTICING REWARD (3/5)
The second most powerful Downgrade in my opinion, with Hampered being the best! It being a Bounty is nice too. As long as you play it at the right time, this should be quite the resource gain. On the flip side, the whole Bounty thing’s objective power level is a bit unknown so I am going to temper my enthusiasm here.
4. YELLOW VILLAIN EVENTS:

BARTER WITH BLOOD (2/5)
So I really hope this doesn’t see meaningful play because game mechanics like this really are not what card games are about. It has to be compared to Delve, which costs 1 more but also:
I have a feeling the card won’t be great as I expect decks that run large amounts of high resource drops should be slow off their feet now that Snoke has been nerfed and Chance Cube is gone. What that means is that opposing decks shouldn’t be under any early pressure which will allow them to outbid, and heavily punish your card choice. We’ll see though, and given my history with Fat Tires, I might just be the one who starts playing this.

CONVEYEX ROBBERY (4/5)
Oof that’s quite the swing potential. We have been seeing cards that cost similar just resolve a single die. I think that as a MINIMUM this will be good tech, but it might just end up being staple at some point depending on how things shake out. 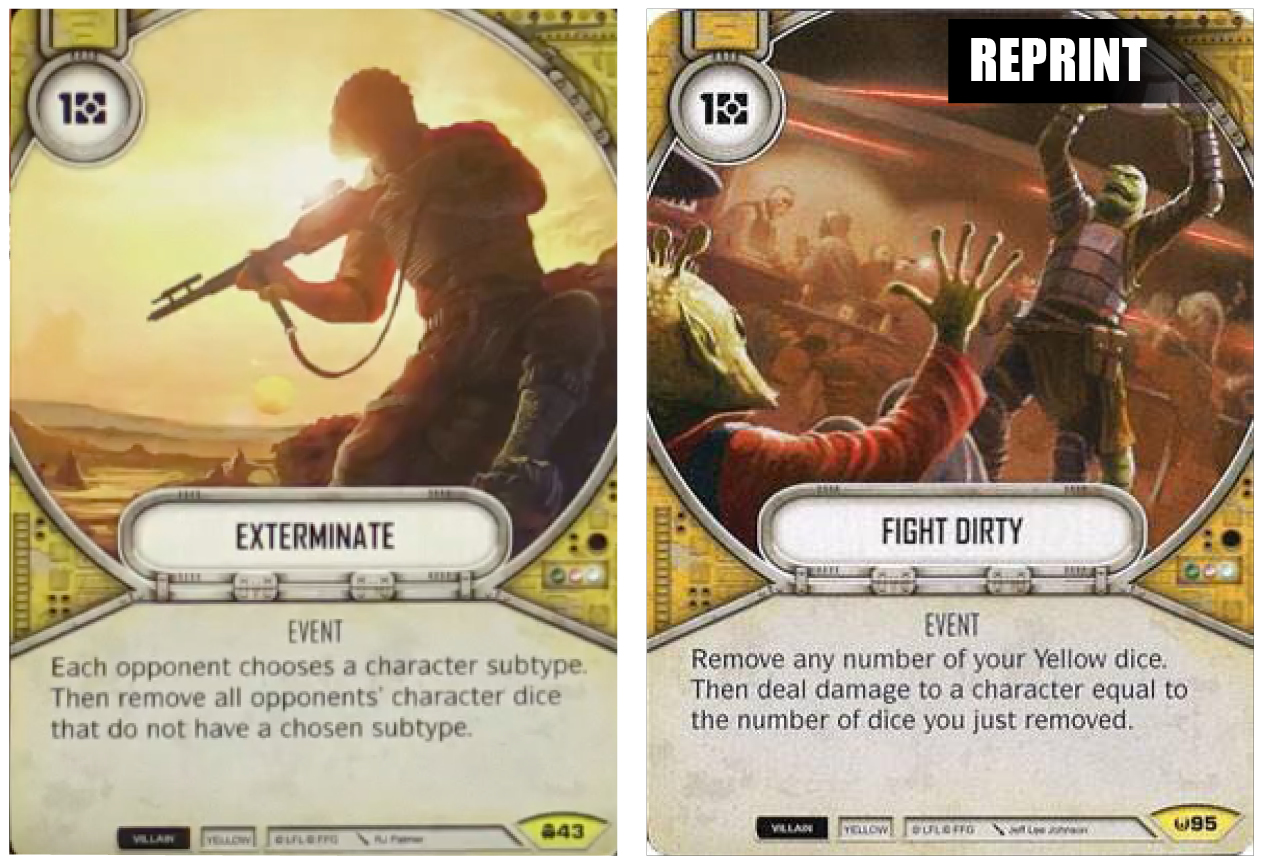 EXTERMINATE (5/5)Yea this looks pretty damn good. You can just wipe half a die pool if your opponent isn’t playing matched up subtypes. I’ll take it being dead the other times for that kind of effect. Even though the opponent gets to choose the subtype the amount of removal you can get out of this makes that a moot point. 5/5

FIGHT DIRTY (4/5)
This card actually didn’t see much play, but it was a solid finisher when it did. I expect the same for round 2. 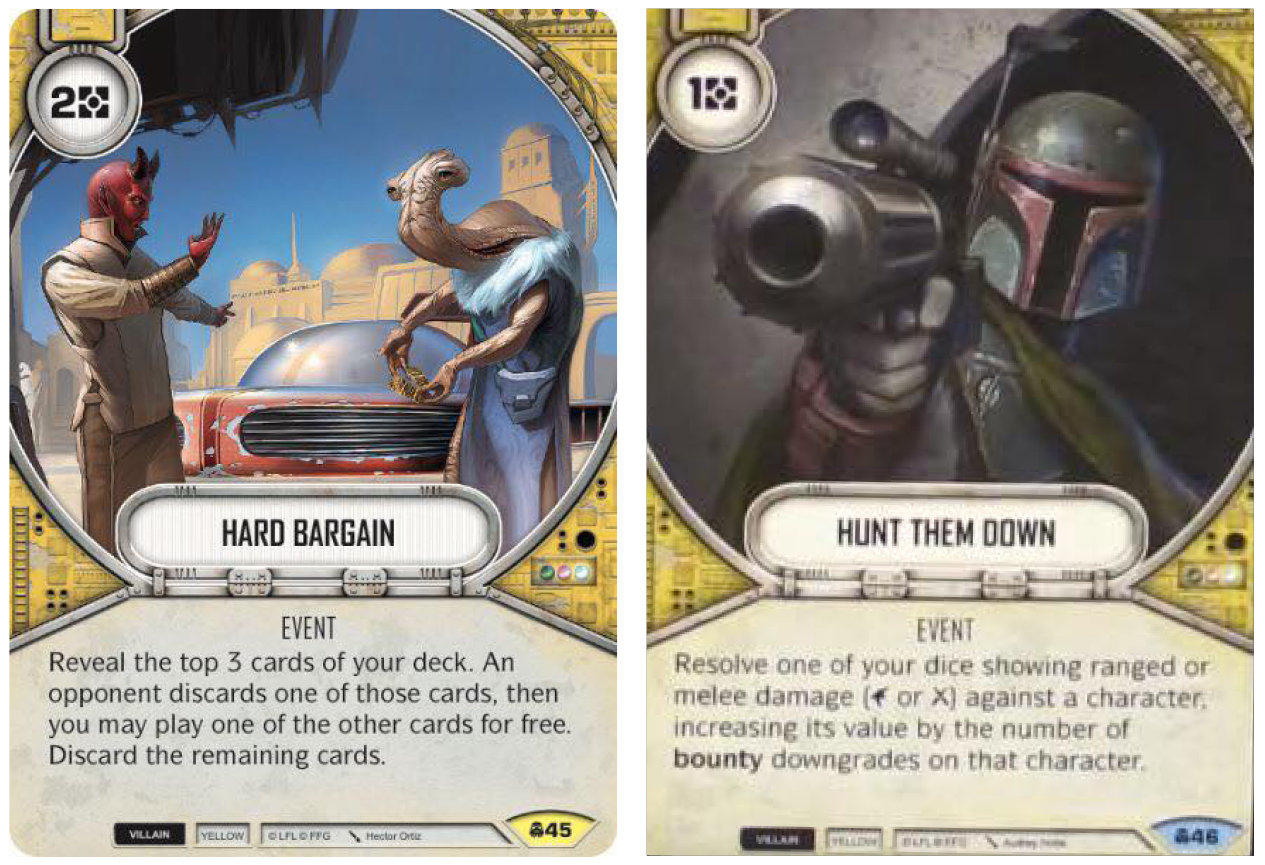 HUNT THE DOWN (2/5)
So this is probably one of the pieces in a Bounty deck. Maybe? I don’t know to be honest it’s pretty miserable if you don’t have enough bounties in play. Also you have to be playing a lot of bounties and they are definitely not all good.
5. YELLOW VILLAIN SUPPORT: 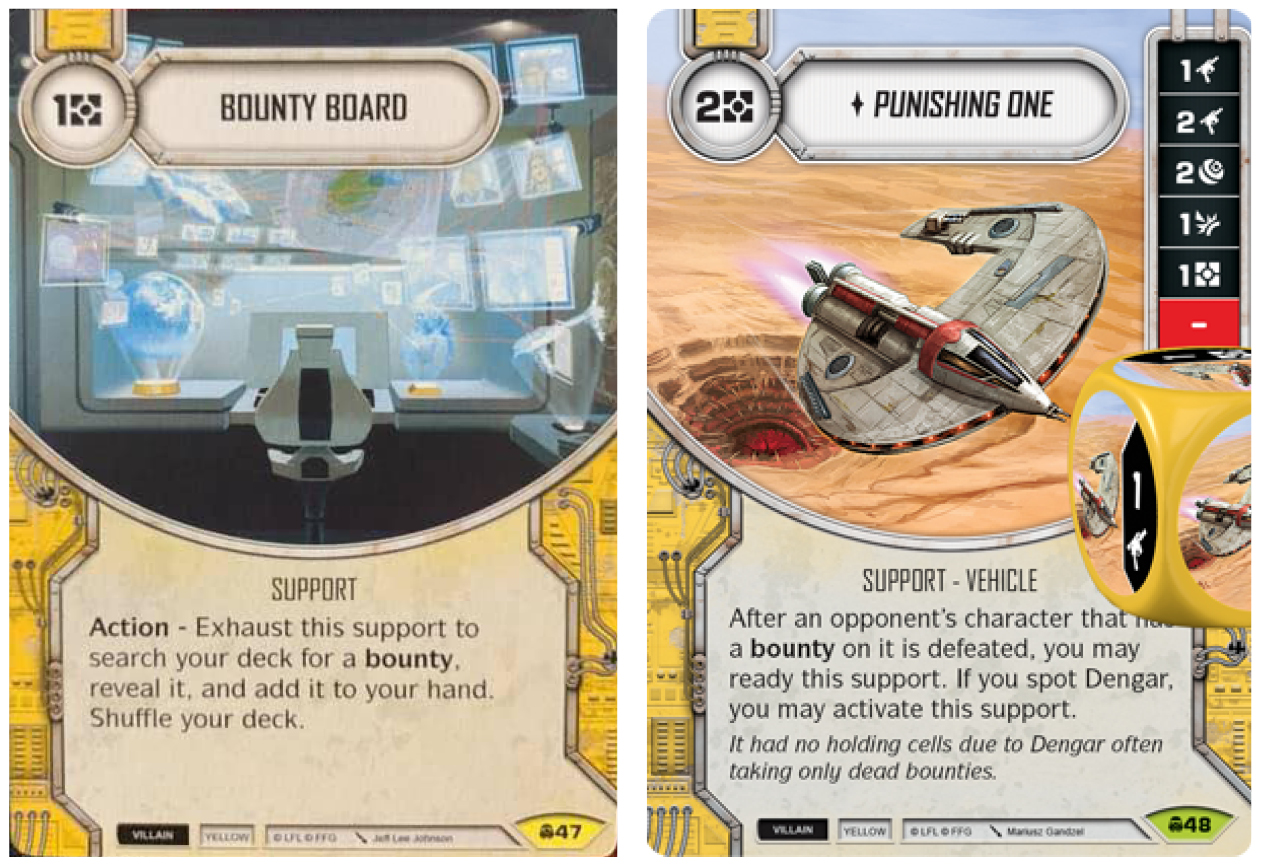 BOUNTY BOARD (?/5)
If bounties end up being good this will be a staple. I try not to use the following grade often but I feel it’s appropriate here.

PUNISHING ONE (3/5)
I actually like this card a lot. Villain vehicles could use more solid two drops and this definitely fits the build. The sides alone are viable for a vehicle deck, and if you are running a Bounty deck than it only gets better. The last line looks like nothing to me.
6. YELLOW VILLAIN UPGRADES:

CRIME LORD (1/5)
Crime Lord is basically just a meme card. It’s a pretty deadly meme if it gets going and finds the right matchup though. It’s best friend Ace In The Hole left though.

DENGAR'S FIREBLADE (0/5)
Dengar’s hot stick is looks about as deadly as he is.