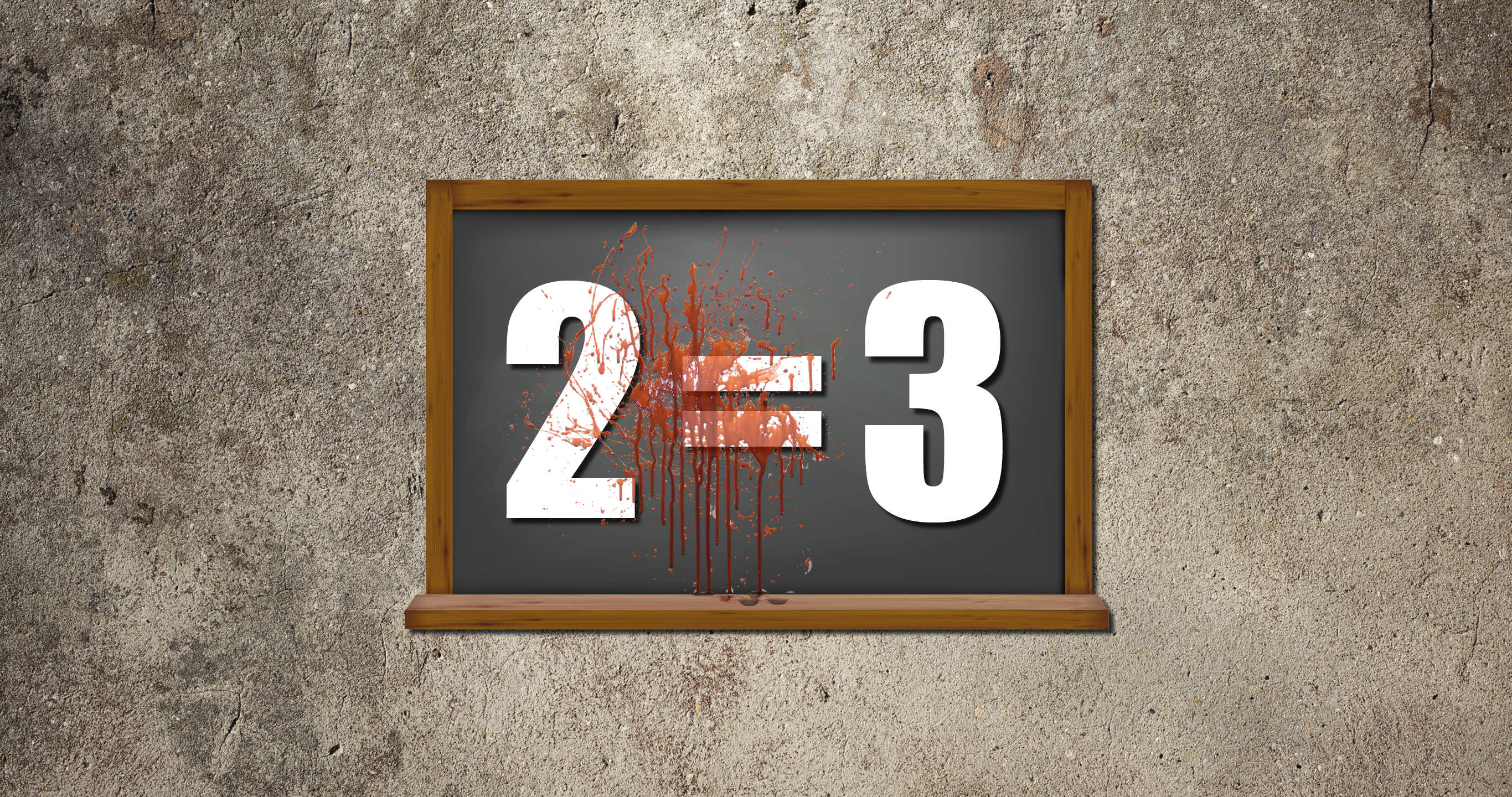 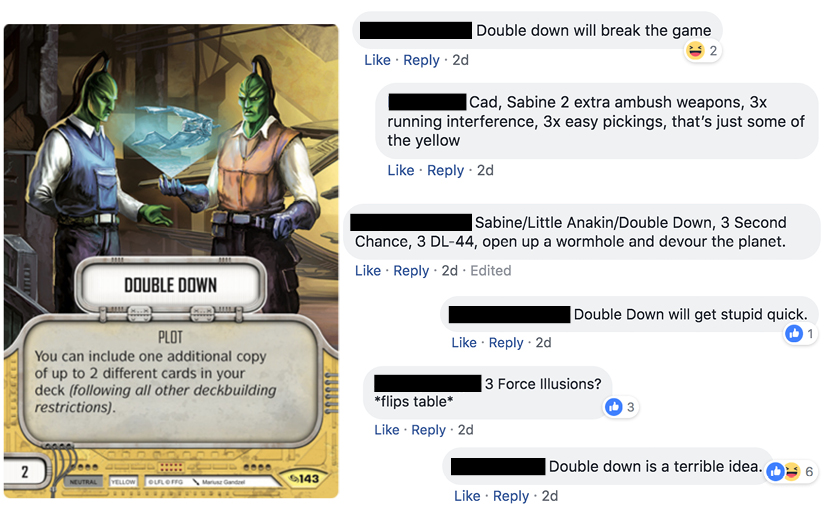 [Editor's note: At least people had opinions on how the new plot in town "Double Down" would affect the game]
1. PLACING MY BETS:Provided the new plot DOUBLE DOWN lives up to the hype (I’m actually not big on it right now, but I am definitely not always the best predictor of playable cards) it is bound to up the play rate of a few cards in Destiny.

I have composed 5 solid picks I feel confident will see increased play, 2 cards I’m going to pick as potential surprises that we haven’t seen in the meta yet, and finally 3 cards that I think seem logical at a glance but won’t end up making it. The prospective picks are leaning towards yellow, as obviously if you have the plot you have access to yellow by default.
2. EXTREMELY LIKELY:

SECOND CHANCE
People are already starting to get upset about the potential of having to play against three Second Chances. Two is a big enough pain as is. I think Second Chance is a good bet as long as a defensive deck that wants to take the game long (Hi mill) makes it into the next meta. Drawing or not Drawing Second Chance can really make or break a lot of Yellow Hero decks, and upping your chances to find a copy seems like a good deal for those decks.

FRIENDS IN HIGH PLACES
I can only see Friends in High Places getting better in the future, and the more copies the merrier. Villain vehicles already can easily turn this card on, and with a new set it’s like that those occurrences will become even more common as cards find upgrades for themselves with better sides. Not to mention that you can also add an additional copy of one of the targets you are trying to hit, adding even further to the desired consistency here.

EASY PICKINGS
I definitely think the most powerful yellow removal event is a strong contender for seeing upped numbers with this event. While not as flashy as an upgrade or as important as a staple to a deck like Rally Aid, the sheer efficiency of this card might just carry it across the finish line anyways. I guarantee that you breathe a sigh of relief every time you see the 2nd Easy Pickings played against you, being thankful that’s the end of them. Well, potentially not anymore if this plot starts to see play. 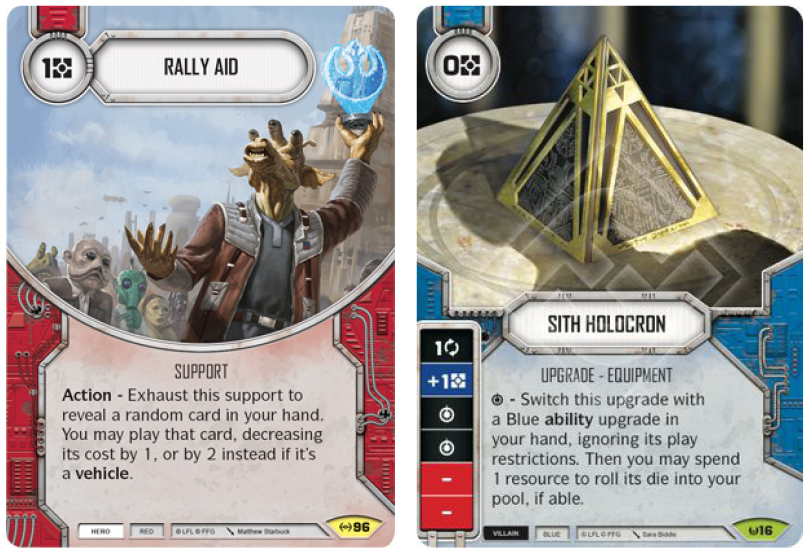 RALLY AID
If this plot works out Rally Aid could be insane with it. When Hero Vehicles start with their Rally Aid round 1, things quickly become degenerate as vehicles start pouring out. Being able to increase the chance of finding one in your opening 5 is the most powerful form of consistency. You are not just making adding another powerful card, like say Friends in High Places to your deck, you are actually increasing the power level of your archetype with a card like this.

SITH HOLOCRON
I have chosen this upgrade for the same reasons I predict a third Rally Aid to be strong. Sith Holocron decks that open with their Holocron in hand turn 1 are so much stronger than when they have to draw into it later. Up the number of Holocrons, and you up the power level of the deck. The only trick here will be how easily blue villain decks will be able to run this plot, they like to fly pretty close to the 30 point limit from what I have seen so far. We will have to see what comes out in this set to see if it is possible, but if it is this choice is a no brainer.
3. POTENTIAL SURPRISES LONG CON
In the time I have played I have never seen Long Con see any play. A third copy of this card however might just be enough. It’s a little spikey on how reliable it is, but three resources for 0 is a pretty good rate! I’ll take a gamble here. 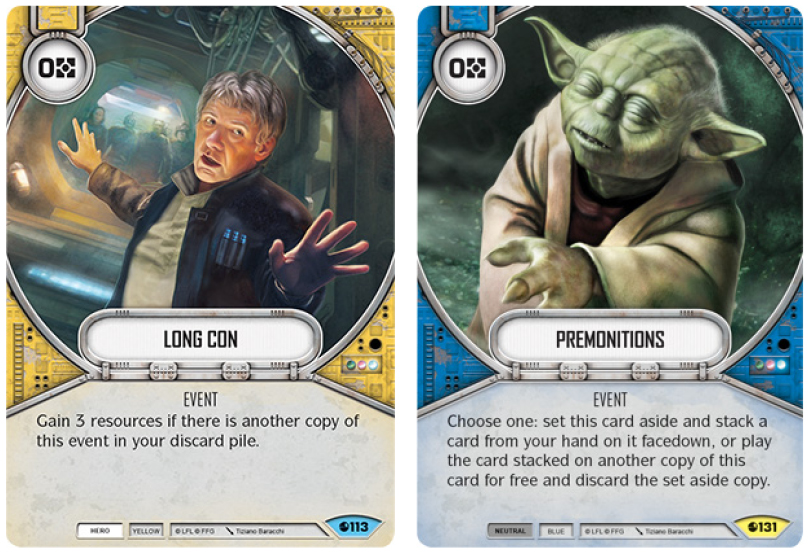 PREMONITIONS
A third copy of this card might just turn it into a functional Hero’s Friends in High Places. Granted once you pull off the copy the 3rd Premonitions is actually just dead, but that might be worth the price of admission, especially if it is a part of some combo deck like Launch Bay OTK. It’s worth noting that if you are running a blue hero deck you can make use of the powerful but underplayed Renewed Purpose too, as obviously you will have the required plot. It might help you out with finding good targets to place under the Premonitions or just finding a copy of it.
4. CLOSE BUT NO CIGAR

ANCIENT LIGHTSABER
Ancient Lightsaber is a very good card, perhaps too good for what it is. A third copy of it would be welcome in any blue melee deck. So why didn't it make the list of "Extremely Likely cards"? I just have a feeling that you will not have a good enough yellow character pairing to get this plot in. Unless they print a good Enfys Nest… then all bets are off! This isn’t to say that you won’t see odd lists here and there doing it, I’m just questioning how good they will be if we don’t get a solid elite melee yellow character that can also work point wise with this plot.

HYPERSPACE JUMP
Hyperspace Jump is definitely one of the strongest yellow cards in the game currently, but I think its power level will translate poorly if it gains an extra copy. Two is good enough most of the time, and some decks just run one now anyways.

FORCE ILLUSION
I’m on record for saying that I think Force Illusion is the best piece of mitigation in the game (I’m definitely not the only one either), but I think the third copy will be what breaks the camel’s back in the self-milling department. I think you will find yourself decking way more than you want to if you choose to double down on this card. While we’re at it why is it called doubling down? Aren’t we kind of tripling down? Or are we quadrupling down since we do it twice in our deck? Probably best not to over think it.