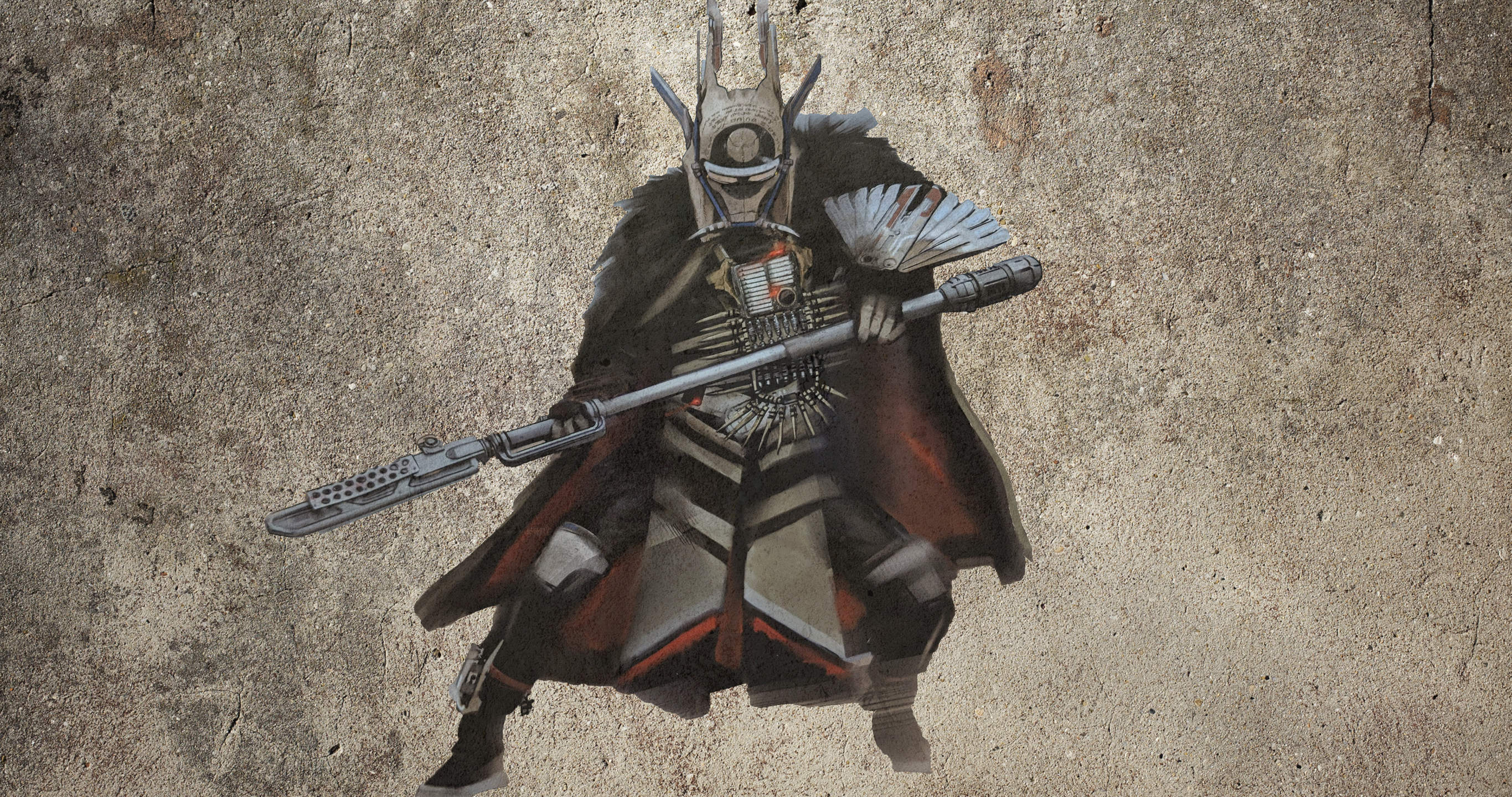 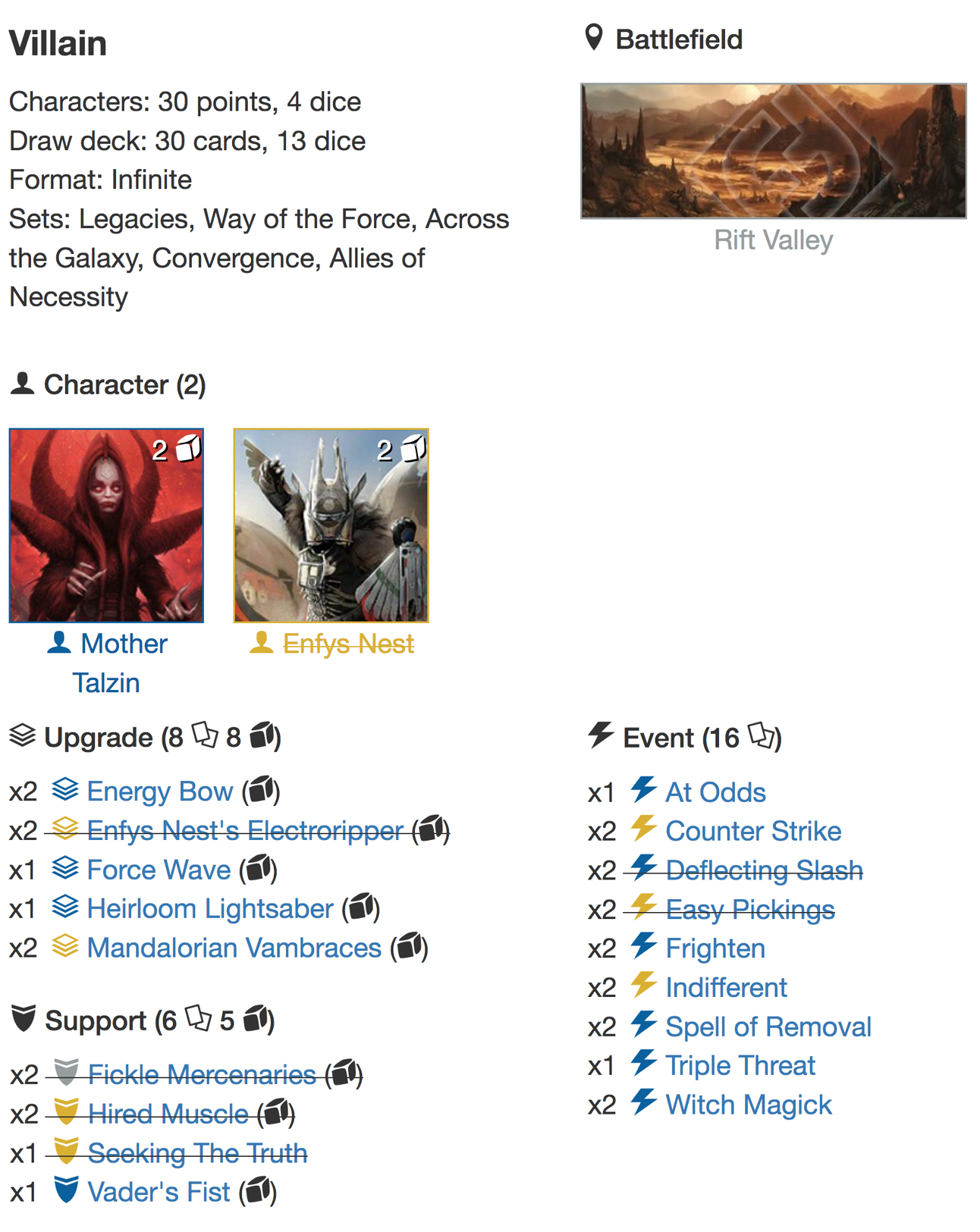 This deck analysis will very much be a work in progress as little testing in a "trustworthy meta" has been made with the deck, but I'll be updating the deck analysis as we get closer to the release of Convergence.

It's an aggro deck, but slow due to the many supports in the deck, which in turn might affect your battlefield choice. Whenever a new meta is developing reverting to aggro to figure out the basics of the meta is usually a good choice, and Enfys Nest seems like a solid starting place. Let's just hope she does not suffer the same fate as Zeb! Remember him? Thought so ...
2. CHARACTERS: 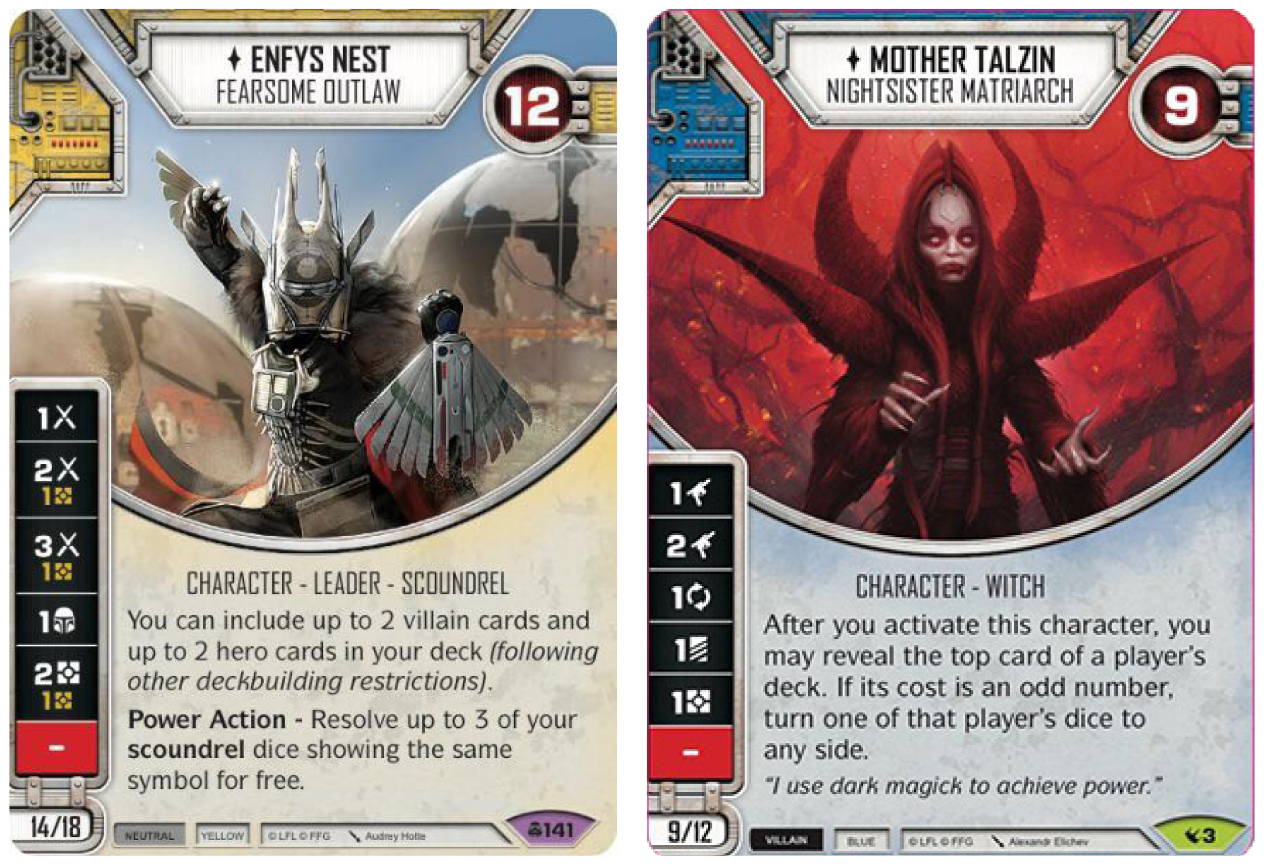 ENFYS NEST and MOTHER TALZIN just had to go into the same deck! The pairing is in many ways reminiscent of the eDooku2/eTalzin deck that did reasonably well during the latter part of the Across the Galaxy meta, primarily because Count Dooku was good at combating the terror which was Darth Vader and the deck had a ridiculous high level of consistency courtesy of the abilities of Dooku and Talzin respectively.

Enfys Nest is NOT as reliable as Dooku, lacking both the ability to flip dice and the Focus side, but offers more damage sides, although the 1 Melee side is really bad, and also a 2 Resource side that can be resolved for free with her Power Action. The resource economy is potentially better in this deck, which should allow for a bit of flexibility in deck construction.

I've chosen a 28/2 distribution of odd/even costed cards to get the absolute most out of the Talzin's ability, Witch Magick as well as Rift valley if I win the initiative. This deck compared to eDooku2/eTalzin has lost some key cards, most notably Force Speed and Force Illusion, while Overconfidence and Unyielding will be sorely missed as well, and whether or not it will be able to overcome that blow testing will show.

There's a much higher reliance on quality supports in the deck, which fits nicely with the odd-even ratio as well, with the big question mark being Vader's Fist.
3. UPGRADES:

The ENERGY BOW and MANDALORIAN VAMBRACES are your basic 1cost upgrades. The Energy Bow is decent, and the ability can be used with Seeking the Truth, which is still a big question mark in the deck, and while the Mandalorian Vambraces fit well with the damage sides of the deck, it really does feel like a consolation prize. Truth be told, it feels like there's not enough decent upgrades around to add to the deck.

ENFYS NEST'S ELECTRORIPPER honestly doesn't feel right for the deck. I've played it a couple of times, and while it can be strong on Enfys Nest, I usually prefer to upgrade Talzin, and should probably try out other 2cost upgrades. The 3 Melee payside in particular feels bad, especially since it cannot be resolved at a discount with Enfys' ability (it's not a scoundrel die). I'm currently considering a 1:1 split with Palpatine's Lightsaber and the Electroripper.

One of the problems with including even costed cards in the deck, other than the obvious, is that you'll need to keep them in your hand when mulliganing. So they better be good. You can't risk drawing into them later with Talzin's ability, Spell of Removal, Witch Magick or Rift Valley. The Electroripper just doesn't feel like it's THAT important. 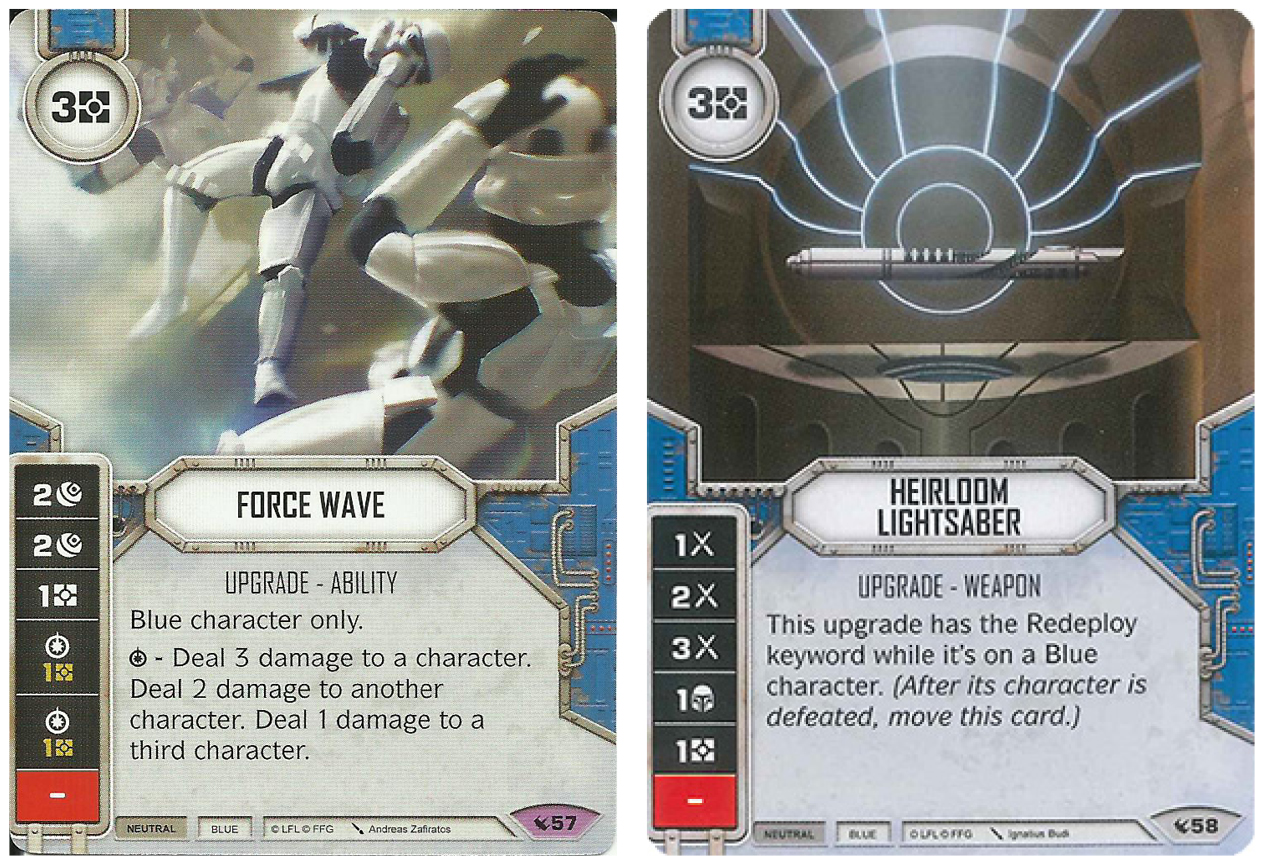 FORCE WAVE makes it into the deck to offer a bit of bite against 3wide decks, and although both Specials are paysides, it can really pull its weight in the 3wide match up.

HEIRLOOM LIGHTSABER is preferred over Dagger of Mortis due to the three base damage sides, which can be clutch if you don't have Enfys Nest in play. Redeploy is great in situation where Talzin is going down and you need to overwrite one of her upgrades to ensure some return on investment.

I've generally tried to keep the resource cost curve down as you'll need resources for every single event you play!
4. SUPPORTS: 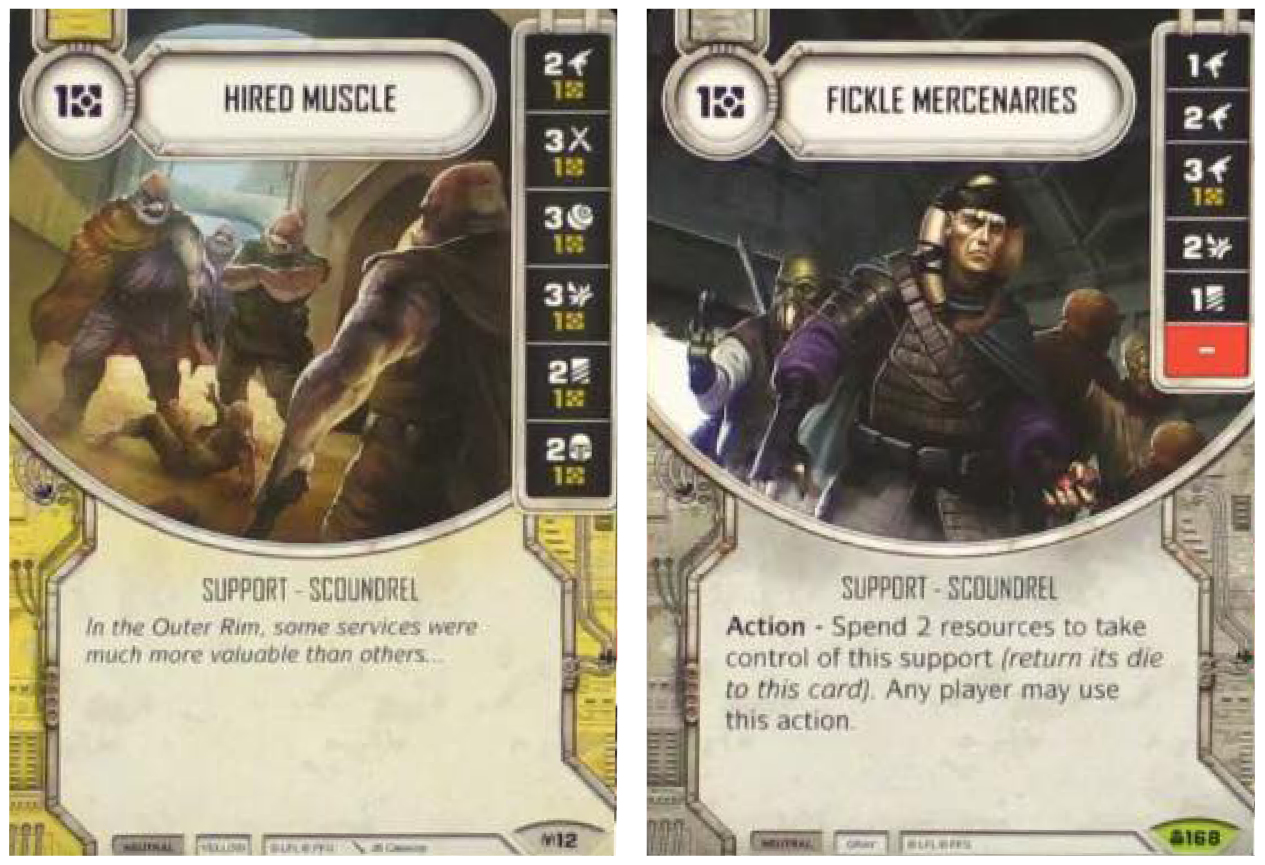 Both HIRED MUSCLE and FICKLE MERCENARIES are amazing new 1cost supports and fits like a glove with this deck. They are even costed to fit with Talzin as well as both being scoundrels to be resolved with Enfys Nest's ability!

Because you can resolve the Hired Muscle die with Enfys Nest's ability making all the sides free, and no Blanks there are really plenty to gain from them. It's a non-unique support, and if you can manage to get two down round 1, you are looking at some serious pressure rivaling that of a Vader's Fist, but at less than half the cost (for two Hired Muscle). It's difficult to make the Hired Muscle die sides to add up together with Enfys Nest as they share just two sides, Melee damage and Shields, so dropping two means you'll often have to find the resources to pay for their dice. They are nonetheless absolutely JAWDROPPINGLY good and could easily be one of the best cards to come out of Convergence.


Fickle Mercenaries are exactly that: FICKLE! And I've been contemplating over and over whether or not to include them in the deck. For 1 resource, the die sides are to die for, but this deck does not generate a lot of resources and you could easily find yourself on the receiving end of damage from the mercenaries. It's difficult for you to maintain control of them, and unless you can resolve some early Enfys Resource sides, you're bound to lose control of them. Additionally, your opponent can just wait to use the action to take control of them until after you activate and thereby mitigate the die when it's taken over by your opponent. 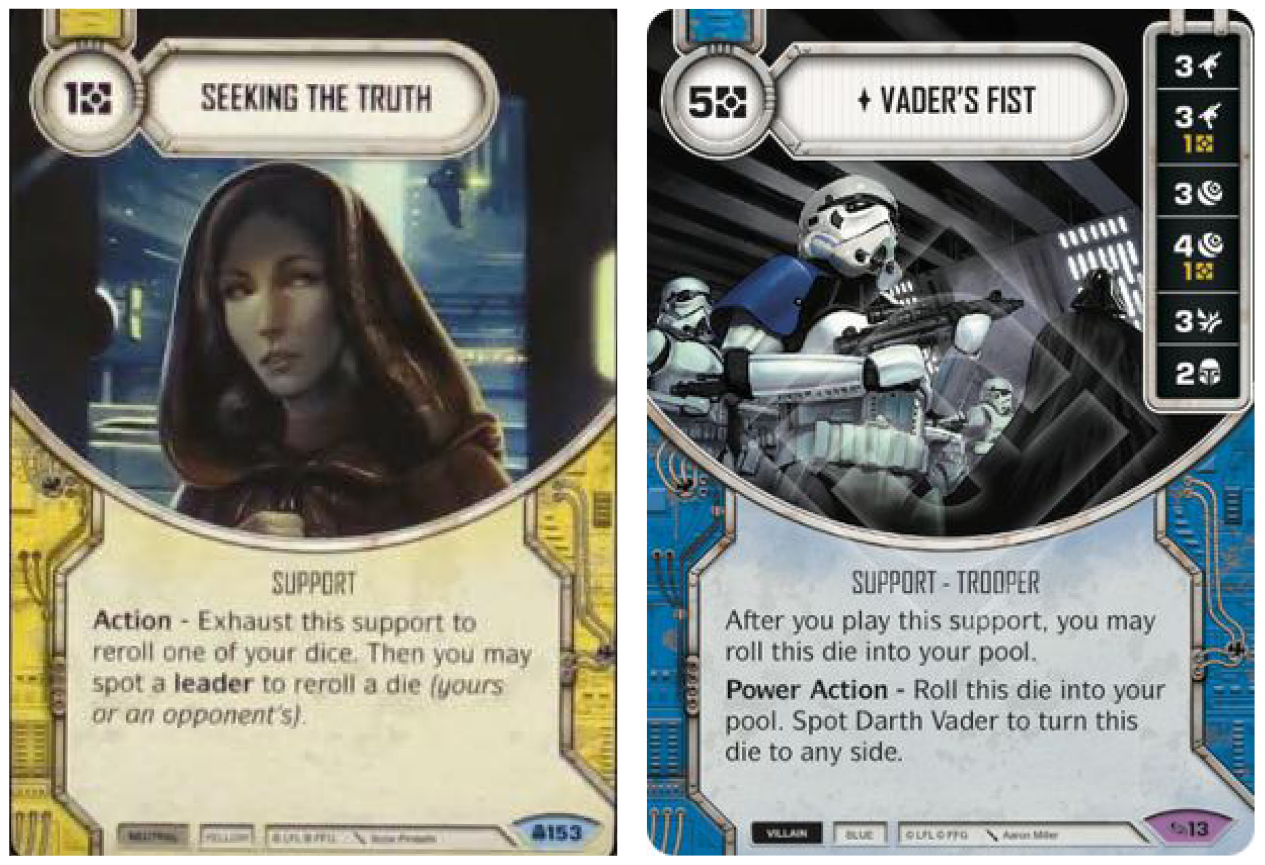 I really wanted to try out SEEKING THE TRUTH with Enfys Nest. It feels tailormade for her! One action to reroll two dice as long as you spot Enfys seems good. It can be pseudo-mitigation or used to reroll some of your powerful character or support dice!
VADER'S FIST is just pure and simple power! But we know that! It might be too expensive for this deck even if you can be lucky to hit both Enfys' 2 Resource sides, but that's not likely to happen, which then means that gathering resources for a Fist is going to be a mountain to climb. I just felt bad going to town without at least one Fist, but should probably be cut from the deck. I'm going with my gut feeling here although the math doesn't clearly support it.
It might be worth considering adding Bartering to the deck if you consider doubling up on the Vader's Fist. 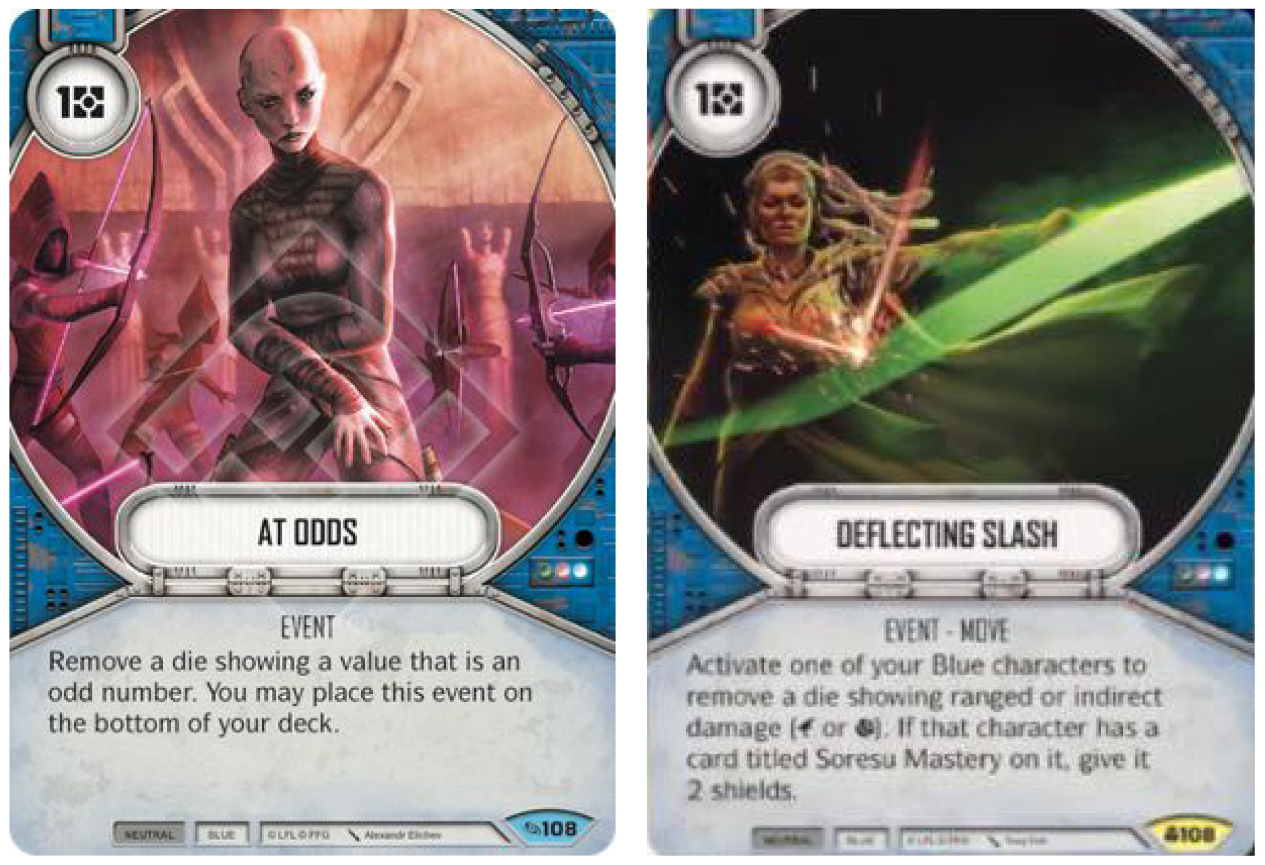 AT ODDS is hugely problematic at times and you'll often find yourself in situations where you won't be able to remove any dice. Biggest problem is its inability to remove Specials. In Standard Constructed, there's at the moment somewhat of a shortage of odd-costed quality blue removal cards, so At Odds is definitely in the periphery and will be cut when/if better removal shows up.

DEFLECTING SLASH
Losing Deflect is a huge blow if the meta continues to develop in the way that the last months have indicated. It does remove both Ranged and Indirect damage, and while that goes some way to make up for the loss of the damage swing of Deflect, it still feels inferior, unless you have Soresu Mastery that is ... then it represents value out of this world. We don't! Sequencing is important here since you'll need to be able to activate Talzin to make use of it. I honestly like this change and puts emphasis on proper sequencing as one of the keys to success.

EASY PICKINGS was one of my first choices for the deck after having put the characters together. Picking the two hero cards to include courtesy of Enfys Nest's ability just doesn't feel difficult. Easy Pickings does everything you want it to do! It's odd-costed, check, it removes multiple dice, check. Sure, it's spot yellow, but it's all good.

INDIFFERENT also requires Enfys in play, and although I'm not fond of too heavy a reliance on one character, it actually feels pretty good and offers your mitigation suite some early stability! 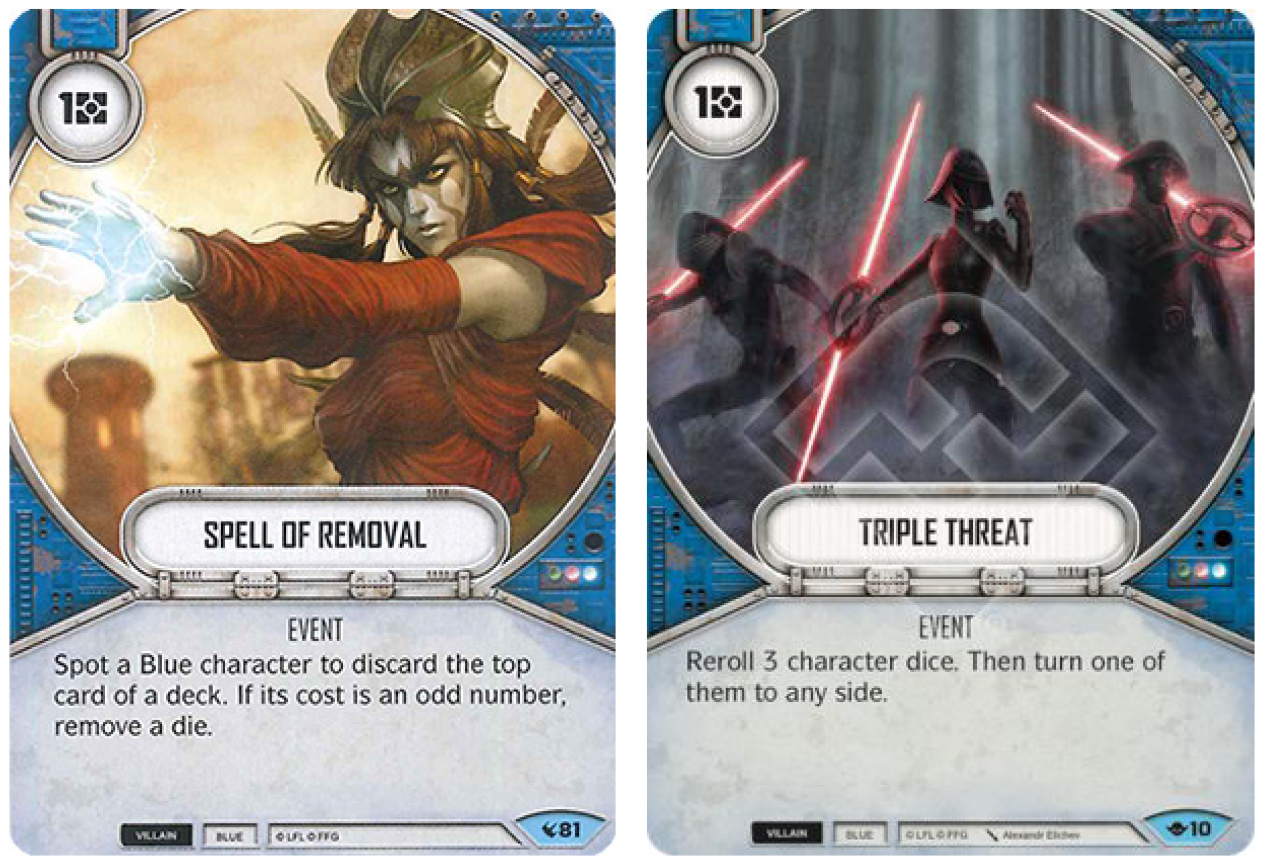 SPELL OF REMOVAL is a great removal card as long as you know what's on top of a deck, which will not be a problem if Mother Talzin is still in play. Sometimes I've considered adding Crystal Ball just to give me more flexibility with Spell of Removal, i.e. discarding the top card from your opponent's deck. I've sometimes heard the argument that Spell of Removal can potentially mill a good card out of your deck - that's a silly argument! Stop thinking like that. The only time when it's bad to mill a card out of your deck to mitigate a die is IF it's the last card in your deck!

TRIPLE THREAT could actually earn itself a second spot in the deck. I've definitely warmed up towards it lately. You'll often have one side you'd like to keep and resolve with Enfys Nest, but just can't find the other side to go with it (and resolve in one go with her Power Action). Triple Threat takes care of this, while also being pseudo-mitigation on your opponent's dice!
6. TECH CARDS:

COUNTER STRIKE is the tech card to essentially replace Unyielding, which has rotated out of Standard. You are running mixed damage sides and counting in the Hired Muscle you are running both Melee, Ranged and Indirect damage which means that you are likely to show any damage side that has been resolved by your opponent in his last round. It feels a bit expensive on Enfys Nest (or the Hired Muscle) since you cannot resolve the damage sides with her Power Action, but it can be a pseudo-No Mercy if resolved on a 3 Melee side and is usually good for 4 Ranged damage for 1 resource on Talzin's dice!

I'm expecting Shields to be a thing in Convergence, especially with Force Illusion and several good mitigation cards rotating out, which means Shield-hate should be as powerful as ever! You are also likely to win the Battlefield against a good number of decks due to Enfys' dice, and FRIGHTEN is just amazing at stripping your opponent of the 2-Shield advantage.

WITCH MAGICK
Remains one of my absolute favourite cards with Talzin, and it has only gotten better as some of the best mitigation will be gone from the game. Expect to heal 3 damage most of the time with Witch Magick (unless you are deep into your deck and haven't seen any of your two even-costed cards) and think of it as effectively mitigating a 3-dmg side.
7. MULLIGAN OPTIONS:

I want to see an Energy Bow and a Hired Muscle, those I'm keeping if drawing into them and digging for if coming up empty handed. If I already have one of the two, I'm also keeping Frighten to make sure I can get rid of my opponent's shields in case I win the initiative roll off. Easy Pickings is my favourite mitigation early, while I'm going to drop all mitigation from my hand if I fail to find a 1cost upgrade or the Hired Muscle.
8. BATTLEFIELD:

Everyone loves Theed Royal Palace and there are so many good reasons for that - especially if you have a neutral character on your team (which Enfys Nest is!). The reason for going with Rift Valley is:
PATREON SUPPORT:As a Patron you support the YOUR Destiny website, podcast and YouTube Channel, and you help us to continue providing content for Star Wars Destiny. We are a dedicated Destiny website and release articles almost daily. As Patron you can enter our Patron only Discord Channel as well as getting access to all our "Chat 'N' Play" videos, while Advanced and Expert tier patrons also get access to exclusive training videos and test videos. Thank you for your consideration!