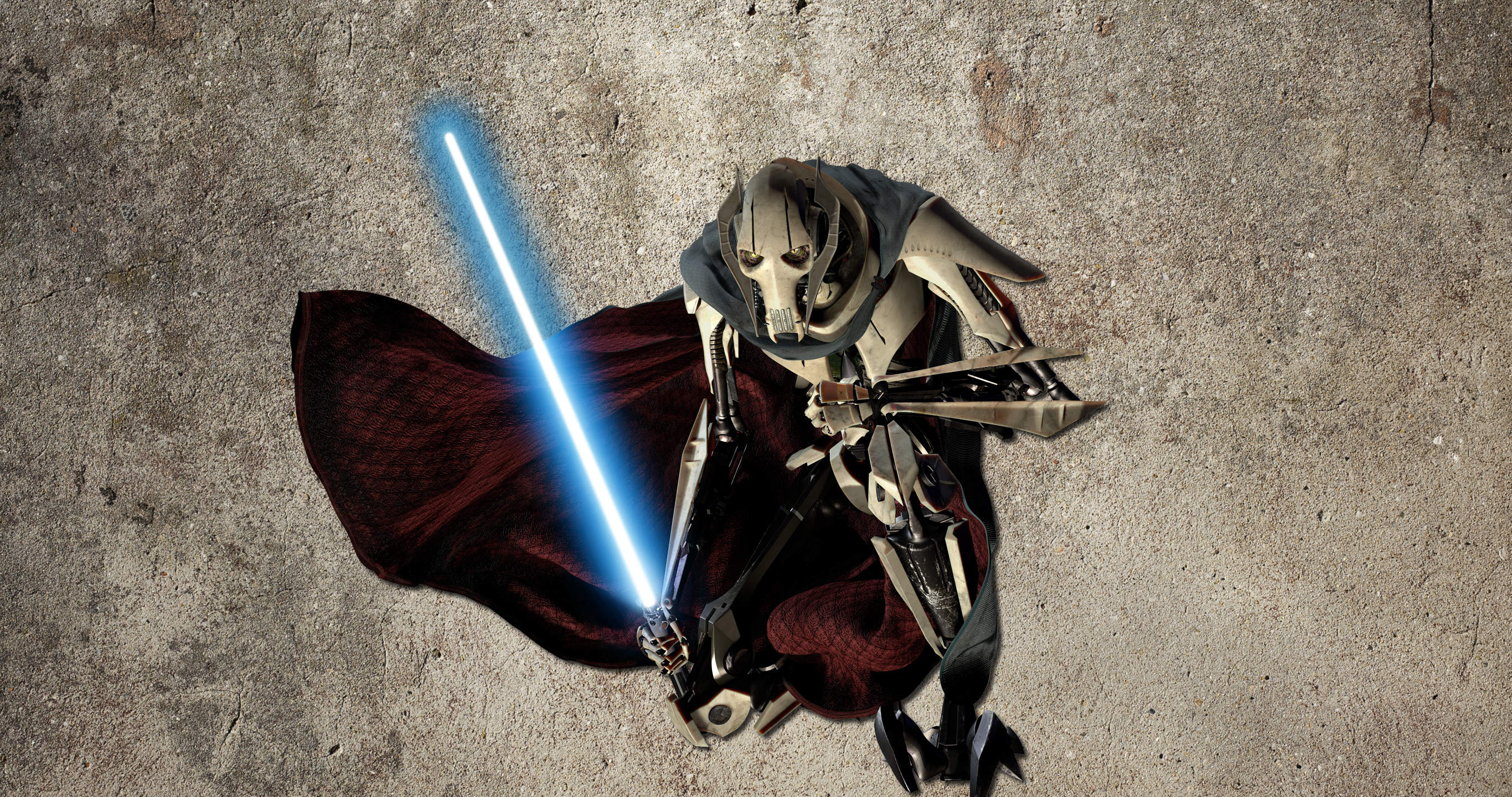 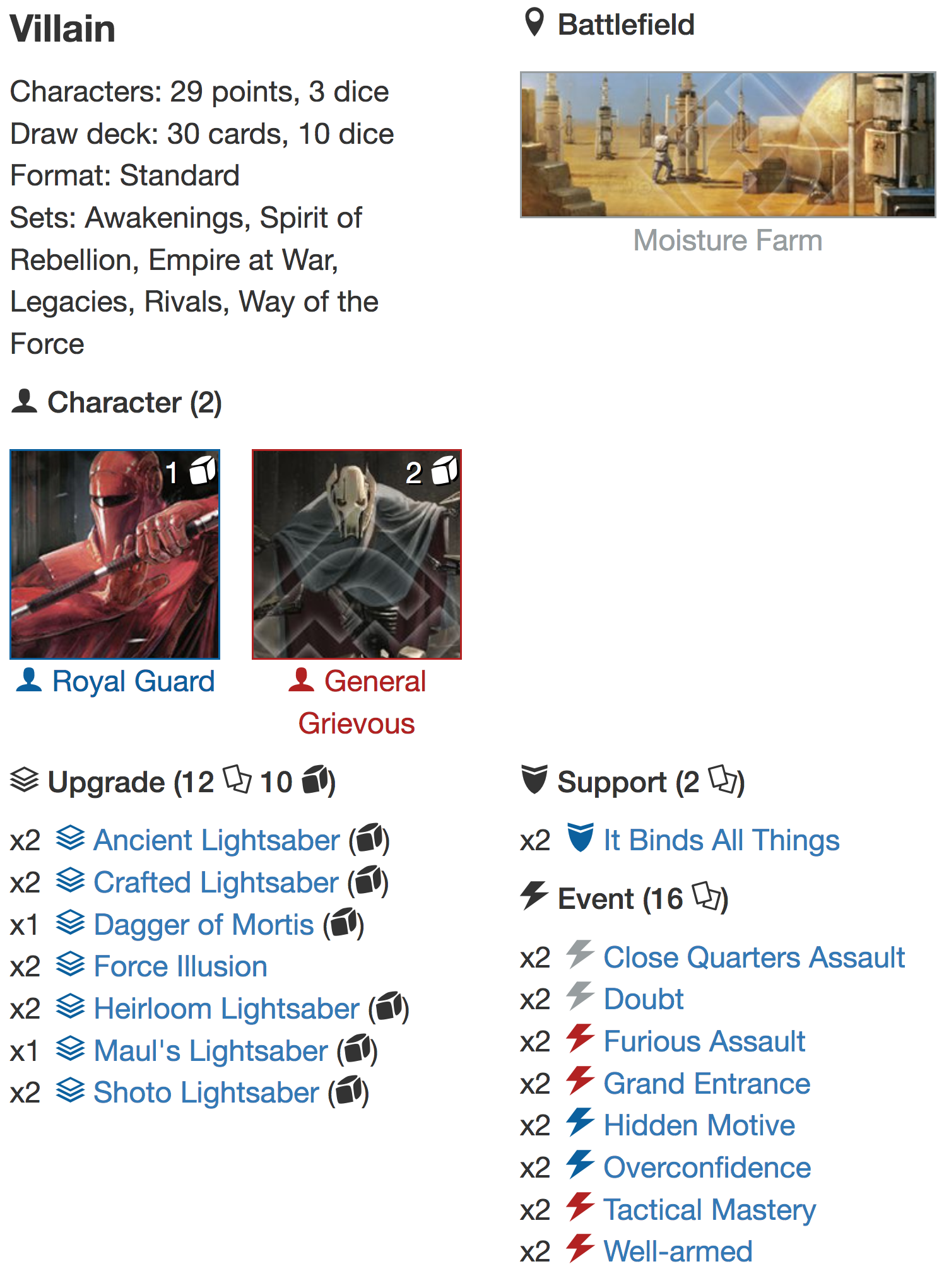 1. GENERAL COMMENTS:
A lot of people got excited when they saw General Grievous, and although most would agree that this deck is hardly competitive, it still offers a lot of fun to play, and could be a surprise package in smaller tournaments.

The version of the deck that we are analysing was piloted by banana_lightsaber to a Store Championship second place, and is as close as you'd get to the cookie-cutter version of any General Grievous deck.
2.CHARACTERS: 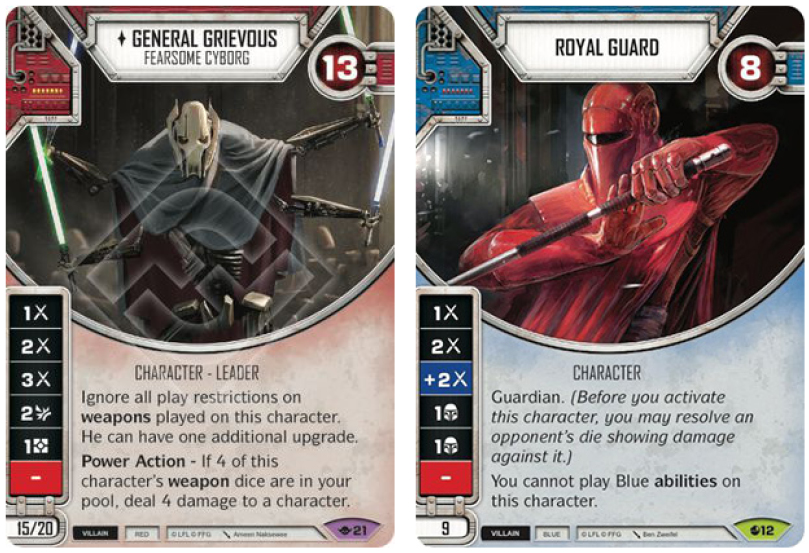 GENERAL GRIEVOUS is truly reminiscent of Darth Vader, the original Sith Lord, from Awakenings, yet retained some of the characteristics of the original Grievous character.

If we ever needed a proof that the power creep is real, the fearsome cyborg is here for everyone to see it:

So what we essentially got in the new General Grievous - Fearsome Cyborg is a hybrid version of the Sith Lord and the Jedi Hunter, inheriting the health of the former and improved dice sides of the latter. The three damage sides are great, and the 2 Disrupt in a world of vehicles and mill can potentially be devastating.

IGNORING PLAY RESTRICTIONS:
It's important to note that ignoring play restrictions does not entail ignoring normal deck building restrictions, such as the inherent ability of Finn1 allows you to. 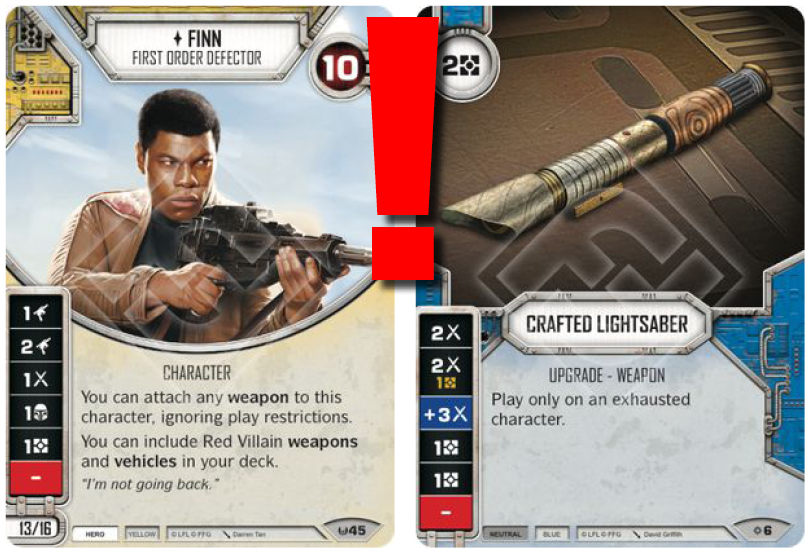 Finn - First Order Defector allows you to build a hero deck including Red villain weapons and vehicles, whereas General Grievous allows you to play a Crafted Lightsaber on that character even if he is not exhausted!

The ROYAL GUARD will help keep Grievous alive adding a bit of punch with his three great Melee damage sides. Unfortunately the Royal Guard doesn't boast a resource side, which would have made him immensely useful in the deck, but he does trigger cards like CLOSE QUARTERS ASSAULT and most importantly giving you access to blue cards where your entire upgrade suite is drawn from.
3. UPGRADES & SUPPORTS:

Your 2 cost upgrades includes the 2 staples, ANCIENT LIGHTSABER and SHOTO LIGHTSABER, bot of which are immensely powerful and amongst the best upgrades in the game. Because all weapons go on Grievous you'll be able to trigger the Shoto Lightsaber as soon as your second upgrade is played, while nobody is in doubt of the power of the Ancient Lightsaber. Finding a replacement for that weapon is going to be a monumental task once the Awakenings Cycle rotates out!

Grievous has finally given the CRAFTED LIGHTSABER a home. And on the cyborg the Crafted Lightsaber is really over the top!! The damage sides are HUUUGE and the swap from the normal 1 Shield side and 1 Resource side to two Resource sides is really incredibly useful in a deck that is resource starved.

DAGGER OF MORTIS
Great weapon, bonkers damage sides and the ability to move shields from a blue character to Grievous is just amazing. The +3 Melee side shouldn't be a problem as you are flush with base damage sides. Redeploy is an added bonus, but most likely not going to be relevant if everything goes to plan as all weapons go on Grievous and the Royal Guard is going down due to Guardian. It can come in handy though if things DO NOT go according to your plan!

MAUL'S LIGHTSABER
Grievous bypasses the play restriction of the Lightsaber, but it's questionable whether you'll ever find the resources to use the Power Action, but the sides of this behemoth is so massive that you should be able to inflict lethal damage on almost any target if you get it out.

IT BINDS ALL THINGS
In your deck it really does bind all things together. It is your only ramp card apart from Well-Armed and you need to see it early. I'd definitely recommend hard mulliganing for it. It's a useless card from round 3 and going forward (it's also useless in Round 1). Do look out for Disrupts showing in your opponent's dice pool. A well-timed Disrupt can easily cost you the entire game. There is going to be a world of difference between the games where you draw one, or even two (that's the dream), It Binds All Things in round 1.

Because it is your only true ramp card that you can rely on for early ramp, your entire upgrade suite has been molded around it, meaning that you are going to miss out on great weapons like Vibroknife and Z6 Riot Batons.
4. EVENTS:

You have 8 mitigation cards, including Force Illusion, which is a bit low, but you are counting on the Royal Guard to take off some of the heat coming at Grievous, which should then reliably be "10" mitigation cards over the course of the game. The best of your mitigation are free, but both DOUBT and HIDDEN MOTIVE are fairly unreliable. Hidden Motive will at best be hard mitigation 66% of the time, i.e. against Maul's Lightsaber, Planetary Bombardment, etc., while it more often than not will be somewhere in between 33-50% and Doubt, while great because it's free, can easily backfire.

OVERCONFIDENCE on the other hand is Spot Blue, and while it affects two dice, which is great, it could easily end up being a dead card late in the game once the Royal Guard is off the board.

In order to strengthen the deck and cover some of the weaknesses it might be worth reconsidering the mitigation suite, but because of the scarcity of resources in this deck, 0 cost mitigation is really your best allies and there are unfortunately not a lot of options.

The rest of your event suite are essentially combo pieces, and there are some cool stuff at your disposal, but as always with combos, they need to show up in the right order and at the right time.

FURIOUS ASSAULT
It's expensive, 2 resources, but can incredibly powerful mid- to late game if you have a tooled up Grievous. It's also unfortunately a dead card once Grievous is dead, but so are you probably, so it's kind of "potato - potatoe". Furious Assault is best when played after an opponent has claimed out, believing that you do not have any other options than resolving the remainder of the dice in your pool. Rolling in 2-3 weapons dice at this point can be absolutely menacing.

GRAND ENTRANCE
This card works well with Tactical Mastery as you are trying to get the most out of your initial activation. Being able to re-roll any number of your character and upgrade dice twice can be truly devastating, just be careful about not walking straight into your opponent's mitigation. Grand Entrance can also trigger some insane Close Quarters Assault plays.

WELL-ARMED
You want to see this card in round 3 when you already have 3 weapons on Grievous. You can then play a fourth weapon for 1 resource. The math on Well-Armed is tricky because you will in any instance pay 1 resource to play it, so I'm not confident that it is worth it. 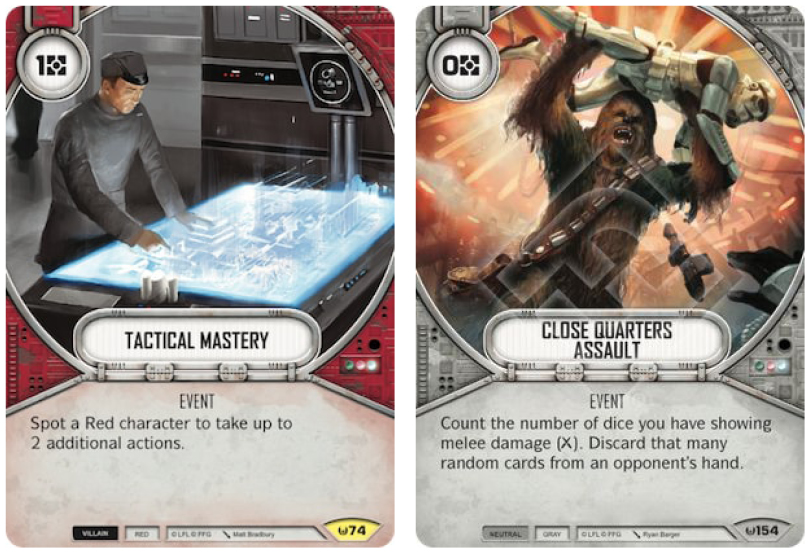 TACTICAL MASTERY
Tactical Mastery is great. Because of the massive damage sides on Grievous you should be able to capitalise on the extra action. One of the power plays include (although expensive to set up):
CLOSE QUARTERS ASSAULT
In a meta so seemingly dominated by decks that have extremely powerful event suites, CQA might just be your best friend. Being able to remove 3-4 cards from your opponent's hand goes a long way to ensure lethal damage. It is in the same vein a great protection against vehicle decks allowing you to halt their ramp and take some pressure off your characters. You are after all dealing with just 21hp on two characters, which is not a lot in a world of Crait Speeders, Resistance Bombers and Planetary Bombardments.
5. BATTLEFIELD:

You are not the fastest deck in the meta, but will be outpacing 3wide decks and 2wides, such as Kylo/Snoke, because your game plan is much more simple. You want to see Melee damage and lots of it. Resolve damage, pray to kill something, rinse and repeat.

MOISTURE FARM and Outer Rim Outpost are great battlefields because they help your resource management, but the (likely) risk is that your opponent will feel very much the same way and stand to gain more from it than you.
6. MULLIGAN OPTIONS:The most powerful start would be drawing into both your It Binds All Things, but as that is unlikely (just 2% chance in your initial draw), we'll settle for 1 It Binds in the opening hand and hope to draw into the second one shortly after.

This hand gives you plenty of possibilities, being able to play an early upgrade, and set up for a round 2 ramp, while offering plenty of mitigation possibilities. Trigger the Close Quarters Assault if you can drop 2+ of your opponent's cards (your cap with this hand is 4 cards).
7. CARDS TO CONSIDER IN THIS DECK:

There are several cards I'd consider for this deck, including the outright broken PROBE to get rid of stacked mitigation and Hyperspace Jumps and LOGISTICS to help with your resource management, possibly replacing Well-Armed.

I'd strongly consider a LIGHTSABER PULL to replace one of the blue upgrades. I've become a bit paranoid about Flames of the Past, and this is a great way to bypass that threat.

Because your deck is so reliant on General Grievous to perform (and survive), MACHINE REPLACEMENT allows you to heal damage from him and not slow your engine down.