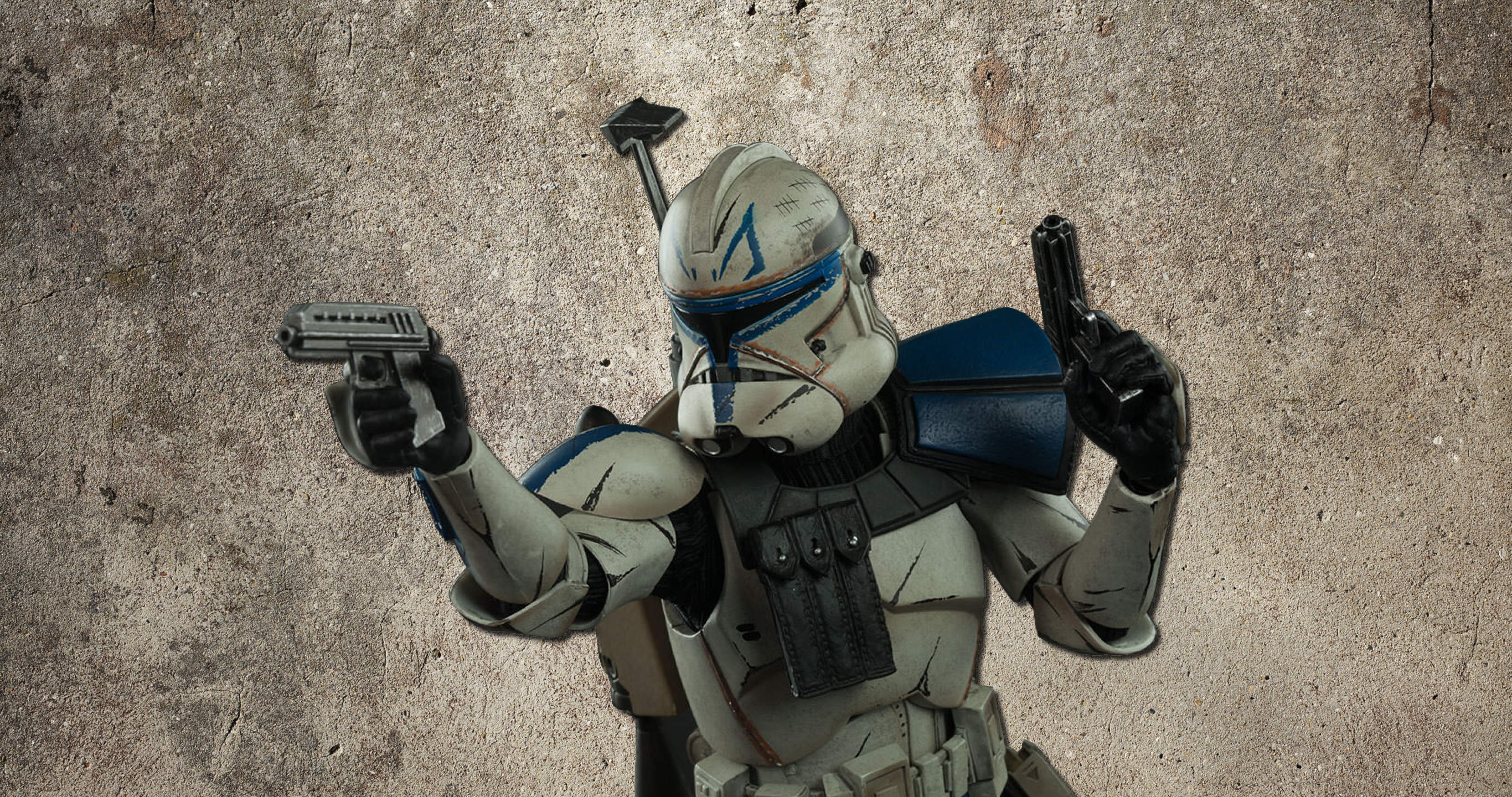 1. INTRODUCTION:The deck list that I'm using as the case example in this article took 4th place at the 50-man Yavin vs. Couruscant Tournament in Bilbao, Spain. It was piloted by Gonzalo, and has a lot of interesting tricks built into it.

It is a fast deck and goes against the general current in Star Wars Destiny in trying to take care of business, playing upgrades, resolving dice, etc. in a high pace and then using cards like Retreat and Hyperspace Jump to escape any unwanted situations and deny slower decks the chance of building their boardstate or resolving their dice.

eRex/Maz/Clone looks in a strong position to take on some of the dominant meta decks, and seems particularly well suited to combat slow and clunky, but hard hitting vehicle decks, whereas its Achielles Heel could be the Thrawn/Snoke decks utilising the Grand Moff/Jedi Temple combo.
2. DECK LIST: 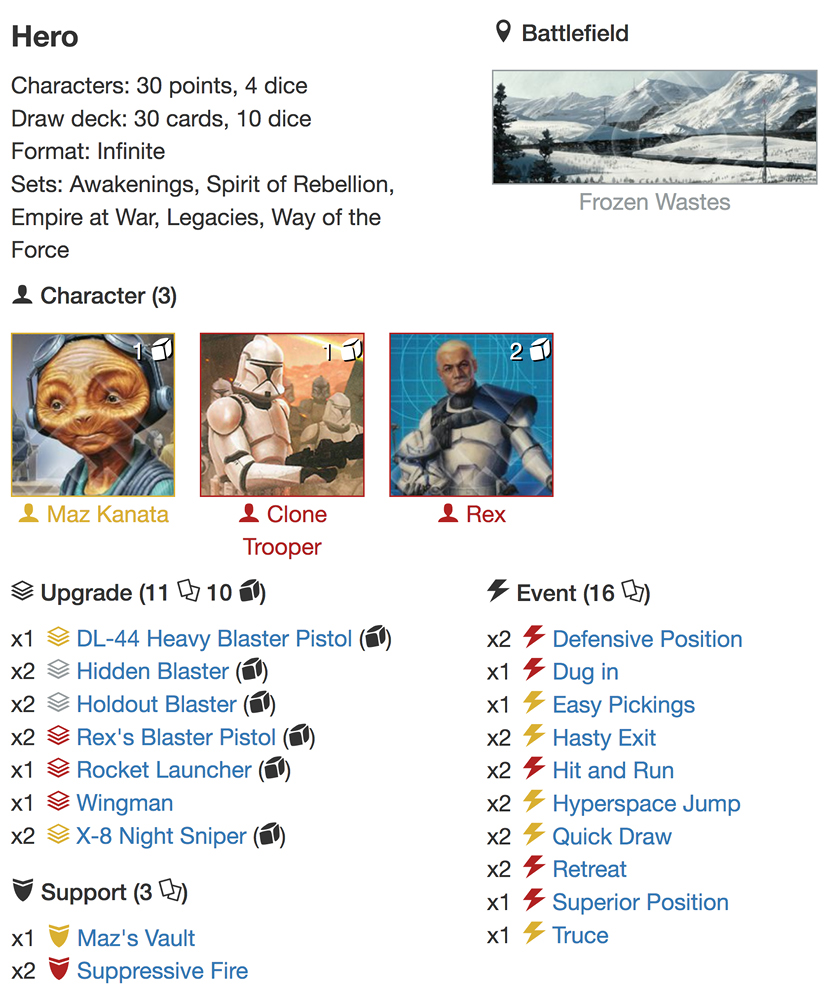 REX is a real challenge. On one hand, he has a great die considering his points cost and a great Special ability which allows you to utilize cards like Dug In, Defensive Position and Hasty Exit to their fullest potential. On the other hand he's so closely tied up with the CLONE TROOPER that in order to get full benefit from him it feels almost mandatory to play both.

Now, the Clone Trooper is not bad by any measure, but it leaves you with just 8 points leftover to supplement your character line-up, which is quite limiting!

Second limiting factor is that you'll most likely want to add a colour and access more cards, mono-red just doesn't seem to be able to cut it, which then realistically leaves you with the following choices for partners-in-crime (assuming you want to run Rex elite): 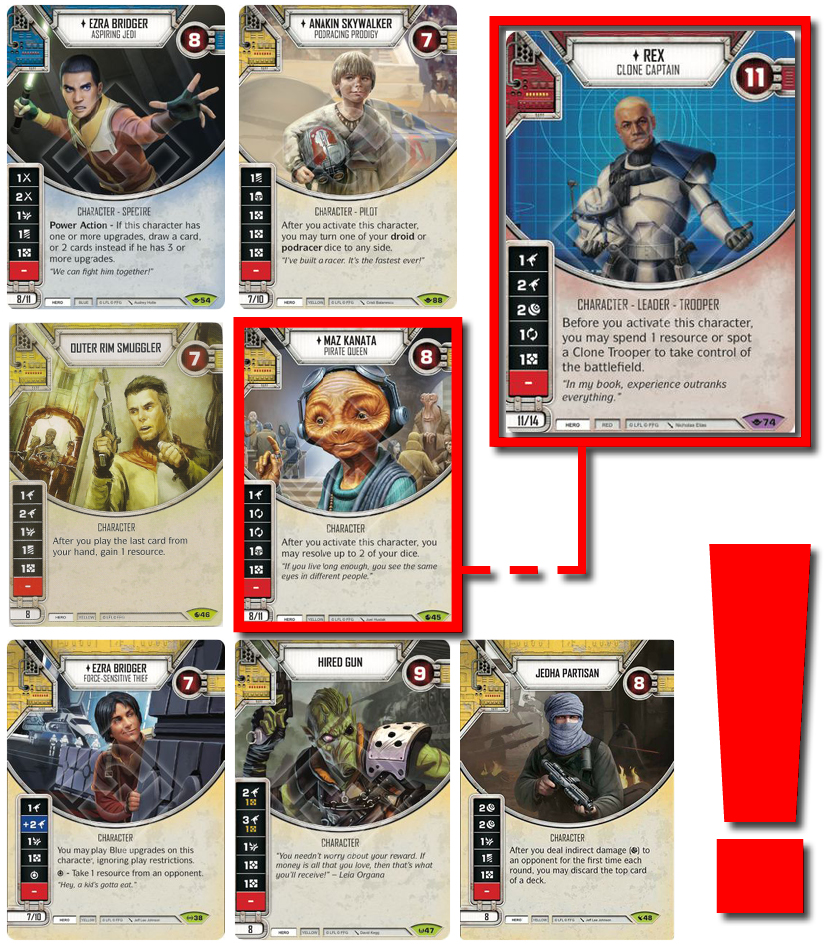 MAZ KANATA is an excellent partner for Rex and his trusty Clone Trooper for 3 reasons!
Only downside is that she's still fairly vulnerable and doesn't offer the same firepower as the Hired Gun, although the latter is himself pretty unreliable due to both his Ranged damage sides being pay sides. You'll never be able to afford that kind of extravanganza in a deck like this! My alternative to Maz would actually be Ezra Bridger due to the two Ranged damage sides and the effectively two Resource sides.
4. UPGRADES:

HIDDEN BLASTER, HOLDOUT BLASTER and the indomitable X-8 NIGHT SNIPER are your go-to basic guns! They all have Ambush so won't slow you down, and works like a dream with Quick Draw, and have decent damage sides that should go well with either of your three characters.

You have seven base Ranged damage sides on 4 character dice and a re-roll from the Clone Trooper ability so are likely to hit at least 1 in any given round, which means that the Hidden Blaster will be your preferred weapon in round 1, unless you draw Rex's Blaster Pistol, and you will probably not want to see the Holdout Blaster until its Redeploy services is needed!

The ROCKET LAUNCHER is definitely a meta call! If you expect to face vehicles, which you should, then you will almost immediately profit from it. But it's expensive, and unless you have a Maz's Vault in play, it's likely that you will need to finance the Rocket Launcher by replacing another upgrade, which can be a gamble. That gamble might very well pay off handsomely, but you'll need to do the calculations as each game proceeds. Paying 1 resource every round to resolve it might take a toll on your resources, while the two Blanks could mean you'll be using Maz's Focus on the Rocket Launcher most of the time!

DL-44 HEAVY BLASTER PISTOL is an incredible gun! It hits like a tank and the "after you play" effect is free mitigation, and if played at the end of a round, replacing another upgrade, you can use the Ambush to claim the Battlefield (if you play on yours) and effectively mitigate two dice!

WINGMAN always goes on the Clone Trooper and can, when coupled with Rex's Blaster Pistol, mean that you activate all your characters in one go! Remember to keep track of all your "After Effects" (Maz Kanata, Clone Trooper, Wingman, etc.). 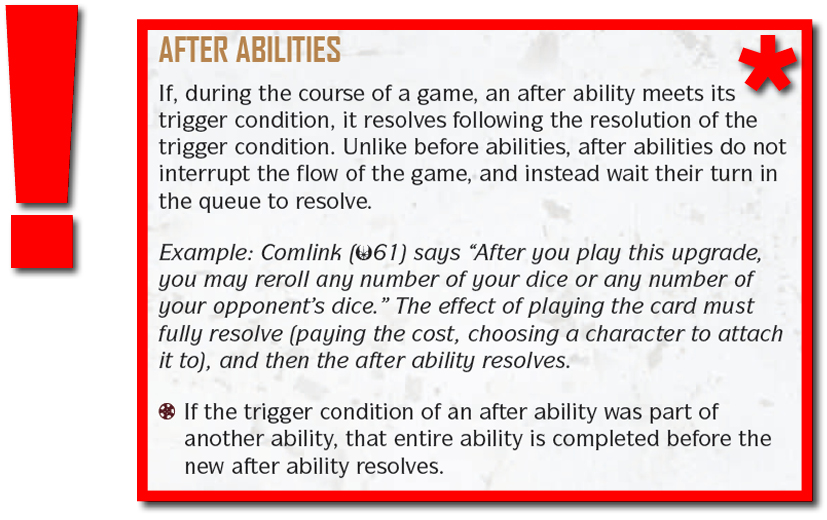 But it is REX'S BLASTER PISTOL which is the star of the show! You want that blaster in your starting hand! It enables your explosive plays that are nigh unstoppable. They might be based on tricks and tech cards, but you pack a bunch of them. 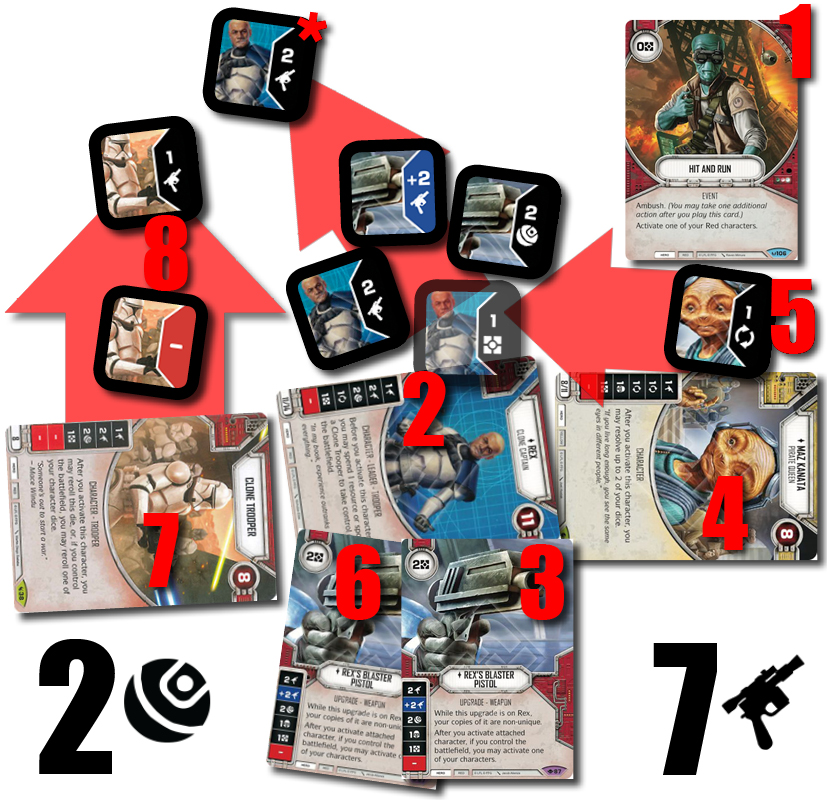 Obviously these plays are not going to happen all the time, but you can set them up in different variants more often than not, whether you use a combination of Rex's Blaster Pistol and/or Wingman, i.e:
The effect can be reduplicated in various forms with a variety of upgrades. The burst damage can be absolutely devastating! And well ... sometimes it also ends up in a whole lot of Blanks ... that's Destiny though!
5. REMOVAL CARDS:

All of the above mitigation cards require control of the Battlefield, which is why they are not often used and considered fairly volatile. They all represent EXCELLENT value though, and would all be must includes in almost any deck if not due to the play restrictions.

DEFENSIVE POSITION is probably the best mitigation card in the game. The ceiling is incredibly high and the ability to "remove all of an opponent's dice showing a value of 2 or higher" can all but end an opponent's entire turn!

DUG IN is the improved version of almost every single Shield generating card in the game. You get 3 Shields and you get to distribute them as you wish!

When usable HASTY EXIT has incredible value, but is often omitted from decks due to the play restriction! But in a deck that consistently either claims, due to the fact that it is currently one of the fastest decks in the meta, or takes control of the battlefield with Rex's ability, it is absolutely amazing! Sure, you only get to remove die sides showing damage, which can be fairly weak against Snoke decks, but it is also free mitigation - and it is your ONLY free mitigation!

SUPERIOR POSITION is auto-removal on any die! Another card that does not normally see play due to its play restriction! 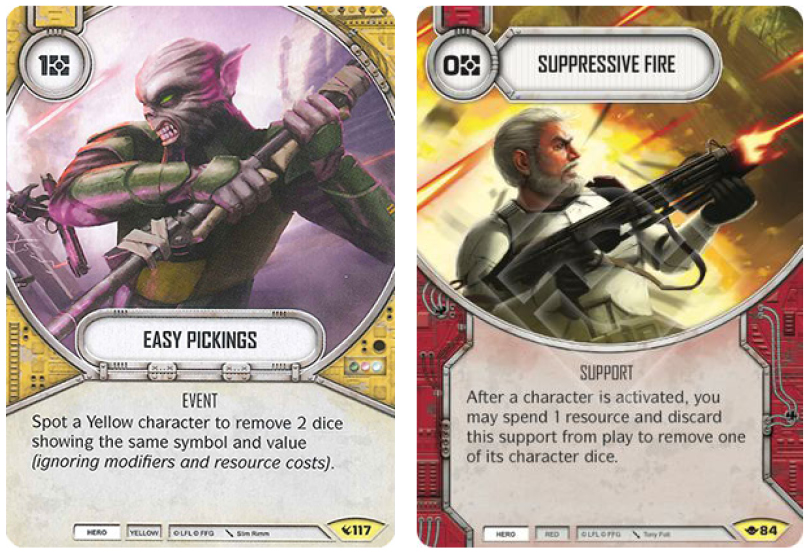 EASY PICKINGS is still one of the kings of removal! Sure, players are getting better at playing around it, but removing two dice for 1 resource is pretty dope. It's only a one-off because it's Spot Yellow, and Maz Kanata is not exactly the tankiest character in the game, and could easily become your opponent's first target if they are dissuaded from going after Rex.

SUPPRESSIVE FIRE plays right into the strategy of this deck. It is a reactive removal card, that allows you to maintain the speed of the deck while still offering you the possibility of mitigating the best of your opponent's character dice. It also allows you to play mitigation even if it is not needed yet, and replenish your hand filtering through it to find the cards you do need!
6. TECH CARDS:

HIT AND RUN is the nerve of this deck and is supplemented by QUICK DRAW which essentially allows you to do the same thing if the weapon you are playing has Ambush, which means that it is usable as a pseudo "Hit and Run" on 7 of your 10 weapon upgrades! You will normally want to activate Rex to maximise your dice in the pool and if equipped with a Rex's Blaster Pistol follow suit with Maz and resolve 2 dice, then proceed to the Ambush, usually resolving damage or resources! As already said be careful to complete each "After Ability" before moving on to resolving the next! In a competitive environment you'll most likely not be allowed a "take back", while casual play is a different matter. It's a good idea to get the practice in!!

A single copy of TRUCE can be a great way to push through unexpected lethal damage, i.e. having no resources and a 3 Ranged damage/1res showing on an X-8 Night Sniper or DL-44 Heavy Blaster Pistol or set up a Retreat or Hyperspace Jump. Keep the Truce back for when you absolutely need it!
7. FAST, FASTER, FASTEST!Being able to end a turn prematurely can be extremely disruptive for your opponent's plans. It is one of your most powerful strategies and should be employed whenever your resources allow for it. You cannot afford too many turns where your opponent gets to maximise on their dice and improve their boardstate.

You might pack plenty of tricks, but at the end of the day, your deck is pretty simple, and not difficult to figure out. You play "reasonable fair", and in a world where fairness is frowned upon, you need whatever help you can get. You don't have out of hand damage and no Snoke Power Action to help you out! You have a bunch of character and upgrade dice, and that's it! In many of your games, you'll often deal 5-6 damage, then have nothing left to do other than watching your opponent play out the rest of his turn.

HYPERSPACE JUMP and RETREAT are both cards that reward your strategy and punishes the strategy of support based decks and can also be a lifesaver against mill decks.

Normally Retreat feels very inferior to Hyperspace Jump, because your opponent would often use that last action to claim the battlefield and take initiative for the next round, but with Rex onboard your life is made so much easier!

MAZ'S VAULT is included because resource management is an issue for this deck, and because of this there are definitely good arguments for going with Outer Rim Outpost as your Battlefield! You want to play an upgrade in round 1 and round 2, usually leaving no resources for your mitigation and for your escape cards. Resolve resource sides whenever you can and be on the lookout for disrupts that can limit your ability to play removal cards or rob you of the possibility of using a Retreat or Hyperspace Jump as an out. More often than not you will benefit more from an early Hyperspace Jump than your opponent, and it can often be the smart out even if it means leaving unresolved damage sides on the table. Hitting for 5 Ranged damage, leaving 2 Indirect damage on the table in order to Jump is better than allowing your opponent an extra round to play upgrades/supports or harvest resources! Be tactically shrewd!

Most good players will know when you are looking to use a Retreat/Hyperspace Jump, and will use this information to maximise on their own boardstate before you do!
8. BATTLEFIELD:

There are several good Battlefield choices including Outer Rim Outpost and Frozen Wastes! The former is good because it enables your expensive plays and lets you filter through your deck, while the latter is free mitigation every round against most decks in the format!

I don't find one definitively better than the other and I think the choice rests very much on a qualitative decision maybe even adapted to your specific meta.