1. INTRODUCTION:
During our testing for French Nationals 2018 (first Nationals using the Across the Galaxy expansion), we were constantly on the lookout for decks that could deal with Thrawn/Snoke! One of the decks that came VERY close, but still didn't make the cut, was Rey/Boussh.

The idea is pretty simple and fairly easy to execute! You are looking at a fast deck that can:
As already implied this deck is both fast and can be surprisingly aggressive, but it severely lacks consistency (which is also why it did not make the cut for us), i.e. compared to Yoda/Boussh. The biggest weakness is it's dependency on dice rolls! There are no Focus sides in the deck, apart from the Force Speed, so pitching cards to reroll is your only means to fix bad rolls - and they are bound to find their way into your games. This deck is definitely not for the fainthearted! If you grind your teeth and tableflip at the hint of a pool full of Blanks or other useless dice sides, then back up and walk away!
2. CHARACTERS: 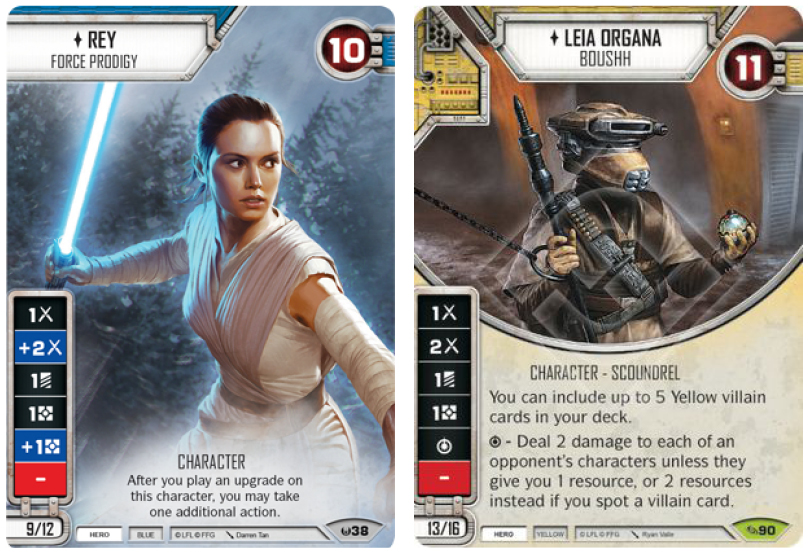 REY - FORCE PRODIGY is both what makes this deck work and the greatest liability in the deck. Her dice sides are tricky to say the least - well ... they are close to the worst in the game, while her ability is absolutely one of the strongest. We already talked a bit about her in our QGJ2/Rey Deck Analysis, and while she's not THAT bad, whenever you roll her dice into the pool it makes you cringe.

But the focus of the deck is to slap a Vibroknife on Rey and Close Quarters Assault fast and obliterate your opponent's hand, leaving as few options open as possible. Your character team is soft, sporting just 21hp across two characters, and there is not a single Shield side on their character dice. You are not going to be able to tank too many rounds and failing to take down an opponent's character(s) fast is going to be your doom.

LEIA ORGANA - BOUSSH is amazing and although lacking the consistent support of Mr. Yoda in this version can still dish out some serious damage. Her Special is great, particularly against 3wide or 4wide teams, but turns AWESOME when you get one of your 4 villain cards in play.

The fact that she has two base Melee damage sides is good and loads of modified dice sides in the deck will need them to trigger off, but you circumvent the problem of having your only base damage side removed by mitigation because you often action cheat the Leia dice into the pool and either CQA away their mitigation or blast the damage through unmitigated. It's all good either way.
3. UPGRADES & SUPPORTS: 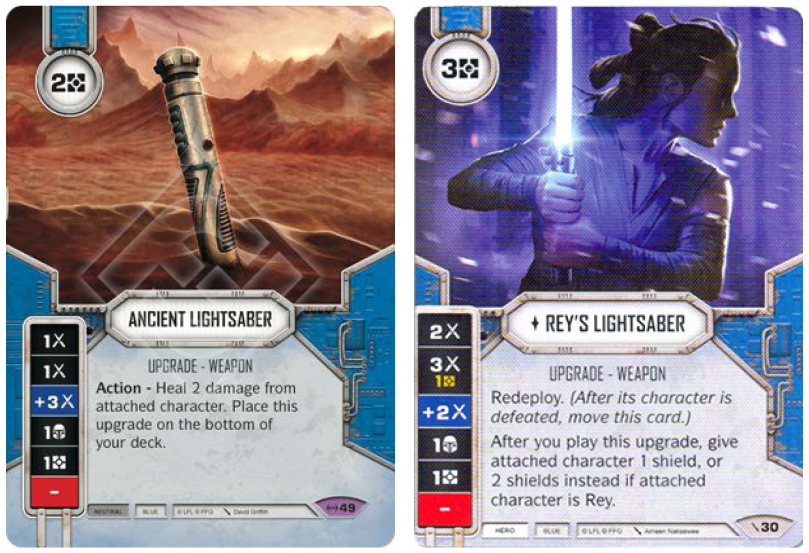 ANCIENT LIGHTSABER
Always good to have another upgrade with two base damage sides and the heal can come in handy when needed - which it often can be with a fairly squishy character team. There are some cool plays available, i.e. playing the Ancient Lightsaber on Rey (who already has a Force Speed attached) with Quickdraw, roll your dice into the pool, resolve a Force Speed Special with Rey's extra action (from playing the Ancient Lightsaber), deal Melee damage, then heal. All uninterrupted and potentially a HUGE damage swing.

REY'S LIGHTSABER has everything you need! 3 BIG damage sides, Redeploy and giving 2 Shields to Rey if played on her! It remains THE best weapon on any Rey character. It is a tad expensive in this deck, but you should be able to play it either overwriting another upgrade or using some of the resources possibly generated from Leia's Special to finance it. It makes Rey a 12hp character!

GRAPPLING BOA is great! It has 3 base Melee damage sides, which is good for the modified damage sides that your deck runs aplenty as well as good to trigger the Close Quarters Assault. The free mitigation if a character takes damage from this die is brilliant together with the Vibroknife modified side! Just remember to get your sequencing right, so characters always take damage from the Grappling Boa (if their dice are in the pool). The 2 Melee damage for 1 resource is pretty weak, but the upsides of the cards outstrips the negatives AND it provides a Villain card that can be spotted to augment Boussh's Special.

VIBROKNIFE
This is one of your two 3 offs in the deck. It is absolutely INSANE with Rey! Played on Rey it provides you with 2 additional actions, played with a Quickdraw, you get to activate AND 2 additional actions! Just enough to also activate Leia and then wreck face! There are some pretty bonkers first round plays available with a Vibroknife in hand:

These plays are easy to pull off and incredibly powerful:
If you start with the NUTS hand, which you of course mulliganed for, you are in a perfect spot to Force Speed Special into a Leia activation and Close Quarters Assault 3-4 cards out of their hand, while you functionally started the game with a Blockade, are spotting a Villain card (Salvage Stand) for your Leia Specials and now have 6 dice in the pool! 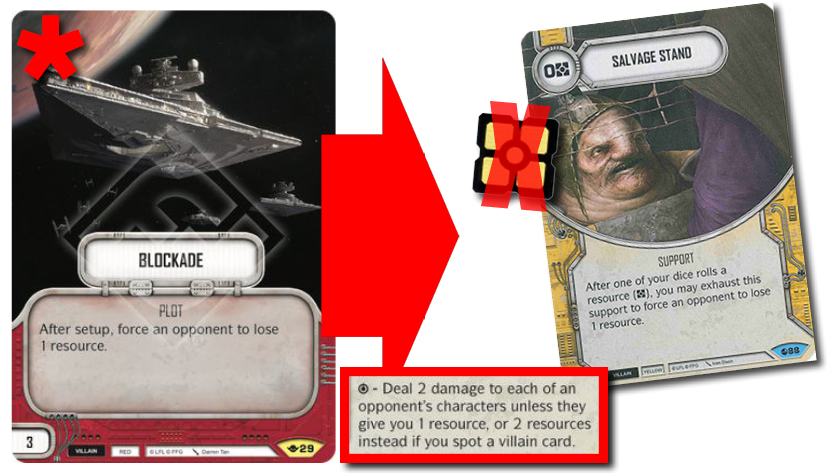 FORCE SPEED is really the icing on the cake. It facilitates a wealth of great plays and looks super powerful in this deck. If both Vibroknife and Close Quarters Assault wasn't so vital to this deck, it could even be considered as one of the 3 offs with Double Down.

SALVAGE STAND serves two purposes:
Salvage Stand could also be a Backup Muscle (as it stays even after having moved the last damage token allowing you to continuously spot a villain card), but the former just looks too damn good in a deck with 55% chance of hitting a resource side on the first activation.
5. MITIGATION:

CAUTION and HE DOESN'T LIKE YOU both follow the same design philosophy. Rey's dice SUCK, you might as well find a use for them. Gaining shields (effectively mitigation 3 damage) or removing an opponent's best die in exchange for your worst die is pretty solid! You could consider running Pacify over Caution, but the 3 Shields is really good although the former is more versatile.

FORCE ILLUSION is as good as ever and because it's an upgrade it still gains you an extra action on Rey, either resolving her dice or getting them in the pool even when she's on the brink of defeat!

Nobody expect's the Spanish Inquisition? Right? That +2 Modified Melee side with no base damage side to resolve it with, or the 2 Melee for 1 resource die when you're out of resources, is just crap ... well ... it is, but at least it can GUARD away 2 dice! It's a one-off though as you'll more often than not actually be resolving your dice or pitching cards to reroll into damage. You are NOT blessed with a lot of quality dice and need to make the best out of what you've got.

HASTY EXIT is great for a fast deck (which means you often have control of the Battlefield) as it allows you to remove ANY die showing damage.

HIDDEN MOTIVE is mostly out of necessity and it can really feel weak at times. All your mitigation barring the Force Illusion is zero cost mitigation, and Hidden Motive fits that bill. You need your resources for upgrades so can't afford the luxury of Beguile or Mind Trick, while running Overconfidence with such a squishy blue character doesn't seem right.
6. TECH CARDS:

ALTER is expensive, but is more flexible than the cheaper Concentrate (which in offense could be an alternative), and can help you mitigate your opponent's dice or set up some nasty Close Quarters Assault plays, while at the same time presenting lethal damage to your opponent. It's great with Force Speed Specials or the same effect achieved by overwriting an upgrade with a Vibroknife on Rey!

CLOSE QUARTERS ASSAULT
This is the cornerstone (together with Vibroknife) of your deck. You want to be able to cripple your opponent's hand right off the bat! That's the easiest way for you to cruise to a win. Get rid of all your opponent's cards! BOOM! Well ... that's usually not how things play out, but removing just 3 cards is still bananas. Most of the deck is designed around this card! USE IT! Single minded? Sure, but it's actually that good a card. 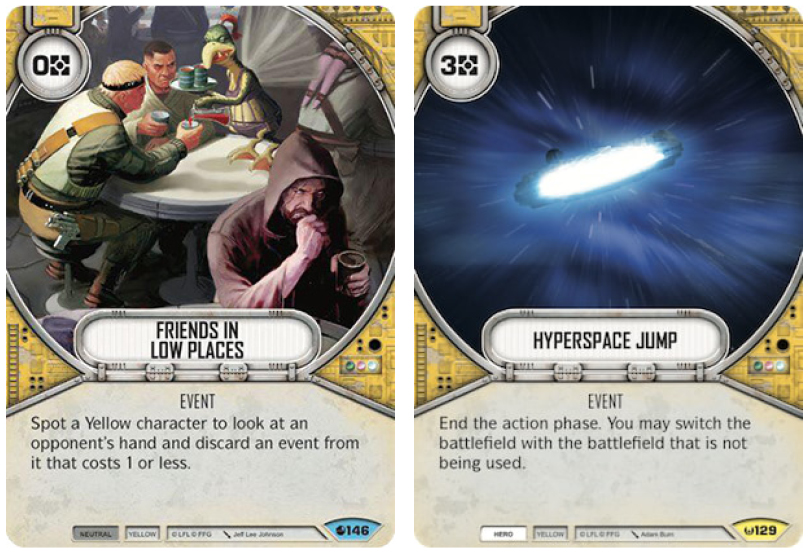 Removing an opponent's mitigation with a well timed FRIENDS IN LOW PLACES is always a strong play! It remains a one-off though because this deck is more than anything an action-cheating fast paced deck. A lot of your mitigation is dependent on you having dice in the pool (Caution, He Doesn't Like You and Guard), but can be great to remove Rends, etc. that can target your Force Speeds and Salvage Stands.

HYPERSPACE JUMP is your get-out-of-jail card. In protracted games where you can't find the dice results to finish off an opponent, or the Leia Specials result in nothing but you gaining resources, you do as much harm as you can, then jump out of there to try again and deny your opponent the majority of their turn. 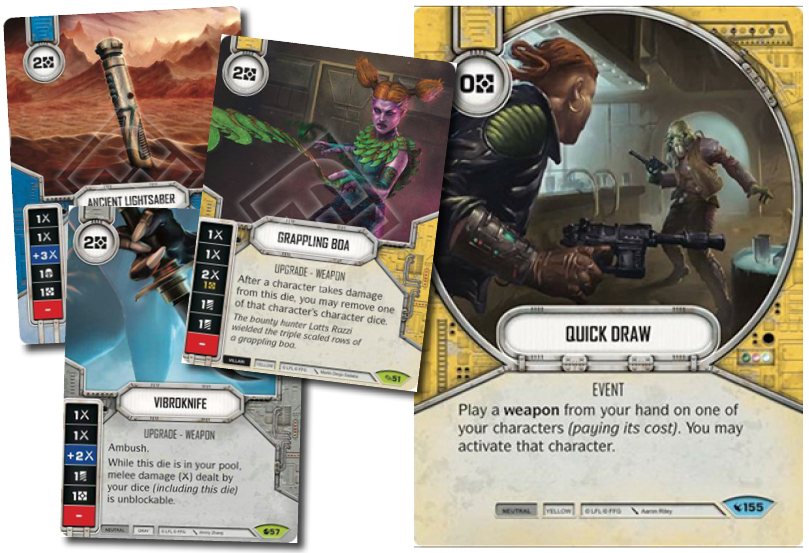 QUICK DRAW is great with Rey as it effectively turns any of your weapons into an action cheating card. And on the Vibroknife it's just crazy: It gives you time to activate, CQA and resolve dice!
7. BATTLEFIELD:

There are several Battlefields that could be great for this deck. You are looking for a pro-active Battlefield that benefits you the most.

EMPEROR'S THRONE ROOM allows you to resolve the Special on Leia either dealing damage or gaining resources from your opponent, while FROZEN WASTES lets you mitigate the best character die your opponent has left in the pool. Both could be really powerful in the deck.

OUTER RIM OUTPOST on the other hand allows you to simultaneously get resources AND filter through your deck for the cards you need the most. Both abilities are essential for an upgrade/trick deck.