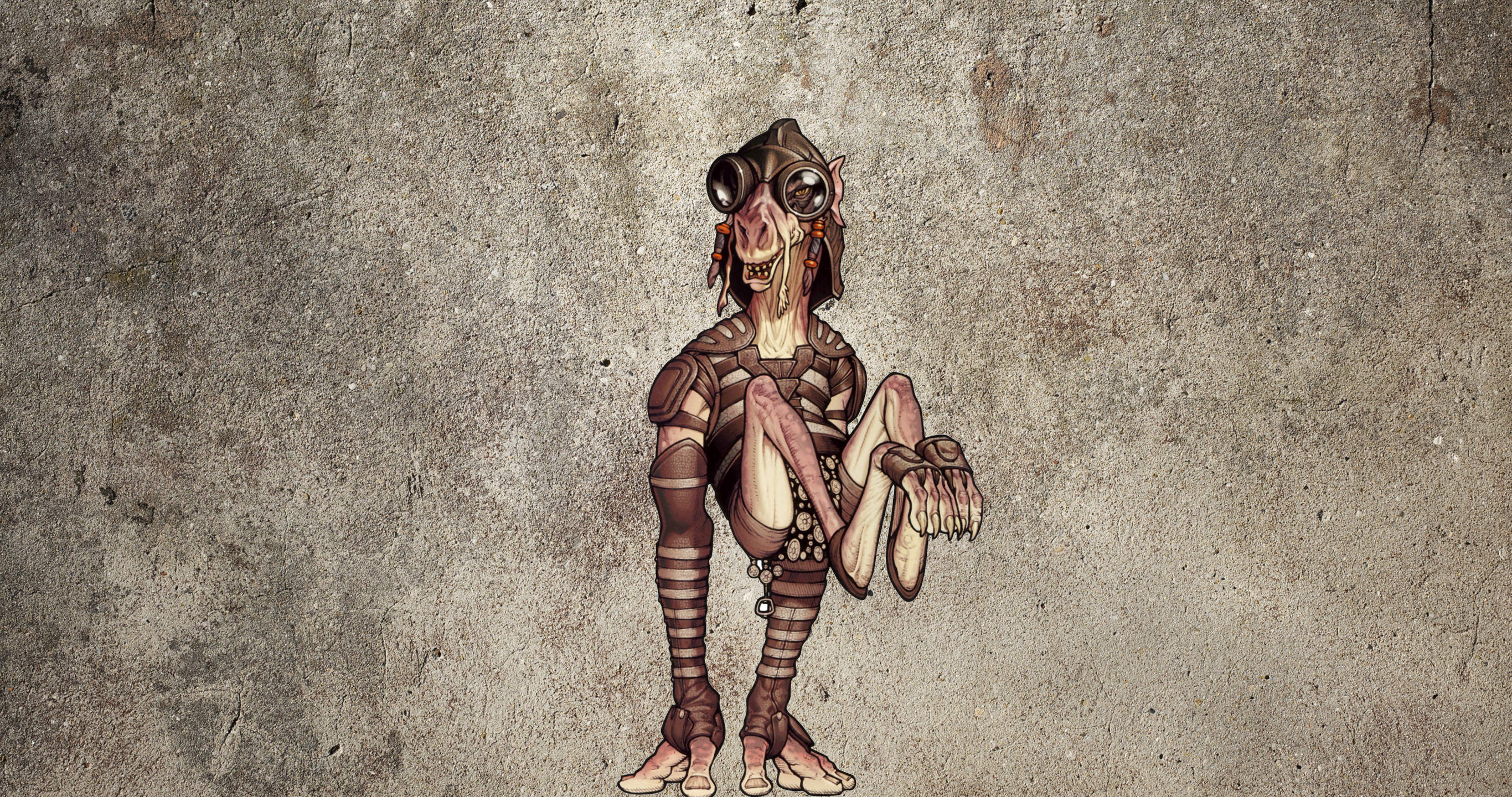 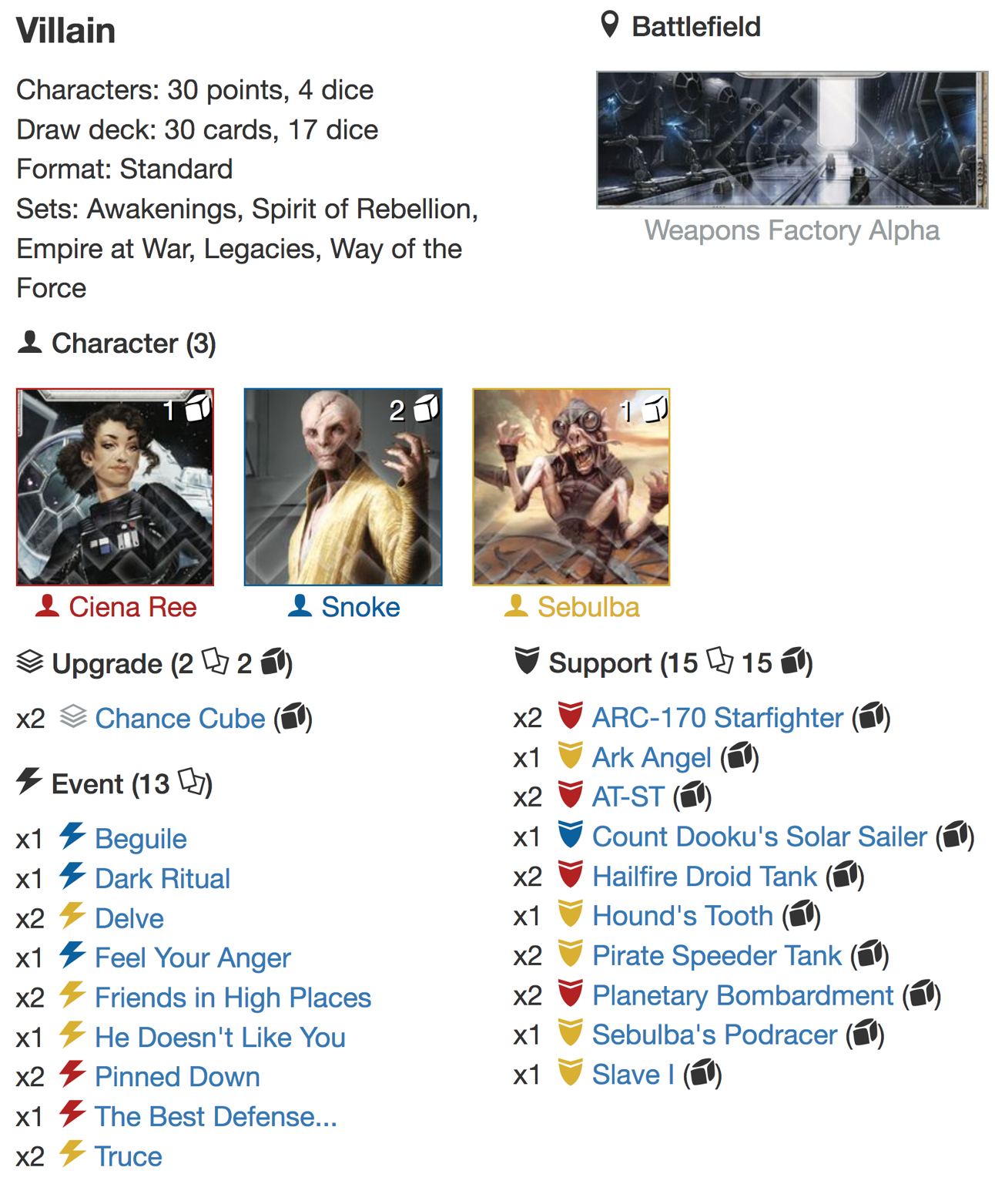 1. GENERAL COMMENTS:
The deck known locally through testing as Miles Vehicles, and since christened "Crotch Rocket", is the brain child of Miles Tamplin, who took it to second in the swiss rounds, at the UK Championships, while I managed to take it to 1st place after 8 rounds of swiss. Miles had been trying to make this work since the game came out, and he has tried various character combinations, initially revolving about General Veers. With the release of Way of the Force, and the power monster that is Snoke, Miles finally found an effective 4dice start, for the deck.

On a personal note, I ran as his gauntlet opponent, trying all sorts of decks, 3 wide Mill, Luke3/Rey2, 5die Villain, Snoke/Aphra/Ciena, etc, and I just could not reliably beat it. After about a month and a half of weekly testing, our group had settled on a deck, although I couldn’t make Crotch Rocket happen for me, until the big day itself.
2.CHARACTERS:

Each one brings something important to the deck.

SNOKE as seen at the UK Championships and beyond, is a true monster in the game, with his Power Action, turning mediocre dice, into great ones and great ones into game winning AMAZING dice.

CIENA REE drives the deck's power. With two Resource sides, she reliably brings the most important die face to the deck. A single Resource rolled on Ciena, becomes three when you factor in Snoke’s Power Action.

Once you have a number of vehicles, on board, and have amassed spare resources, she allows you to activate your big vehicles several times a round. Remember how terrifying Maul's Lightsaber was when it got used twice a round? Well turn that into an AT-ST 4 Ranged damage 4 times in a round or a Hailfire Droid Tank! 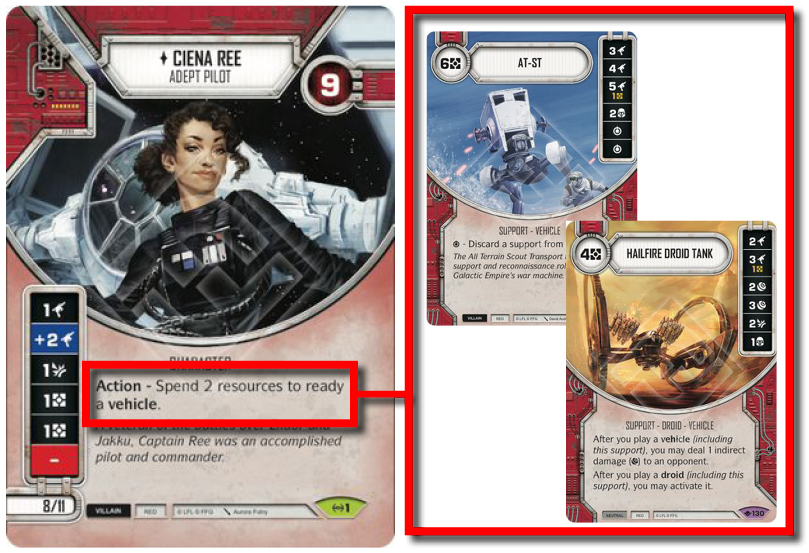 Finally we round out with SEBULBA, who initially was an overlooked character. In this deck he has 2 Blank sides on his die, with his special having no effect. However, all four remaining sides are fantastic. The resource has been mentioned already, but two faces dealing 2 damage, which can become 4, with Snoke's Power Action, on a 9 point character is a big deal. Combined you get a huge 29 Health Points, for your opponent to chew through, which allows enough time for the supports to do their job.
3. UPGRADES & SUPPORTS:First lets take a look at the Upgrades. Two CHANCE CUBES is all we run. Our characters are not the win condition, so we are trying to build critical mass on our supports, as quickly as possible. With a 2 Focus on Snoke, Ciena is normally the target for the first Chance Cube. 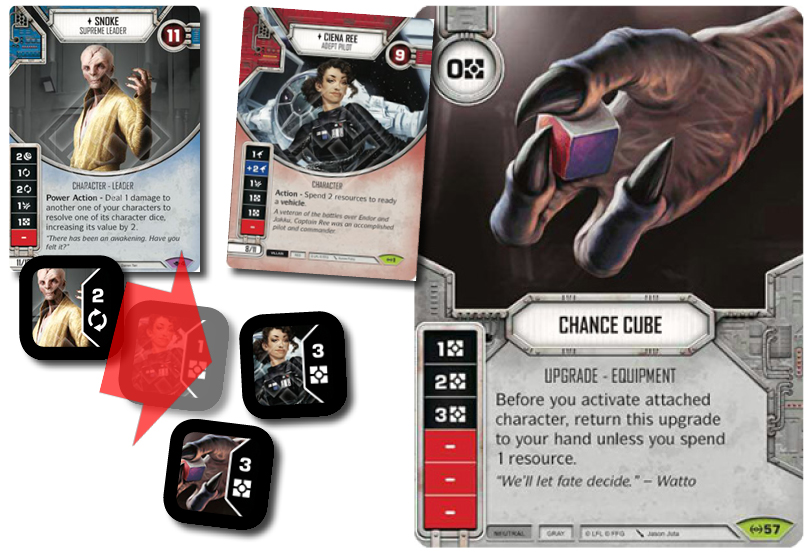 Playing one on your first action on Ciena, you are reliably looking at generating 6 resources in round one, just from those two dice (you are netting 5 resources as you also need to pay for the cube). Also remember that it’s a fantastic upgrade to have, in the current Mill meta. 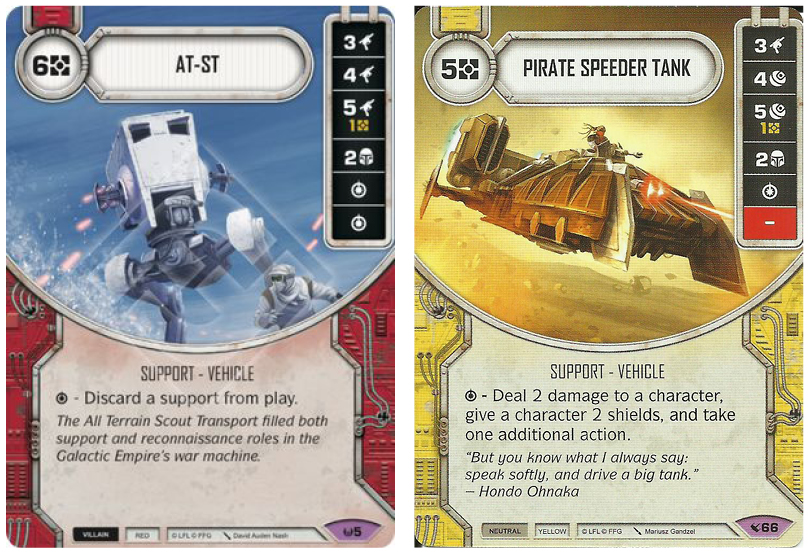 The decks win condition, is centered around the larger supports that we are running. Two each of the AT-ST, Pirate Speeder Tank, Hailfire Droid Tank, and Planetary Bombardment. 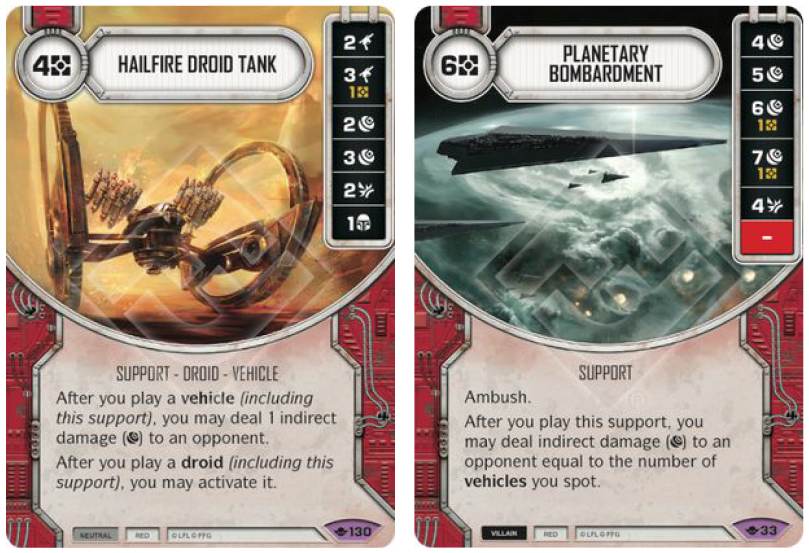 One of each can potentially do 19 Damage in a single round, and no deck will ever survive that. All bar the Planetary Bombardment, feature Ranged damage, which allows you to attempt to focus a character down. They can also be reactivated using Ciena’s ability, for even more damage (except the Planetary Bombardment which is NOT a vehicle). It also means mitigating the vehicle's dice, doesn’t necessarily make you safe from it.

The Planetary Bombardment often does damage as soon as it appears. Every die side bar the blank, is huge, between 4 and 7 Indirect damage, and 4 Disrupt, severely hampers your opponent's plans, be it killing a character or stopping control and board state building.

The remaining supports perform individual roles, and all apart from the ARC-170 Starfighter, are uniques, both on the table and in the deck. Dooku’s Solar Sailer, brings resources and focus, Hound’s Tooth is there, to help ramp resources, although like a Chance Cube, it takes a while for a net gain. The Ark Angel brings some speed, Slave One (Legacies) introduces some control, and Sebulba’s Podracer and the ARC-170’s have consistent damage.

4. EVENTS:Similar to the concept of hero vehicle decks, i.e. eYoda/eRose/Gungan, we are trying to swamp the board with supports, before our opponent defeats our characters. In a standard deck, each time a character is defeated, you lose the dice belonging to them and their upgrades. This hampers your ability to win every time you lose a support, while decks built around supports, do not see this decrease in power, although it comes at the expense of speed. Here we try and get out the larger supports round one. To assist in doing so we run two each of: Delve, Truce and Friends in High Places. 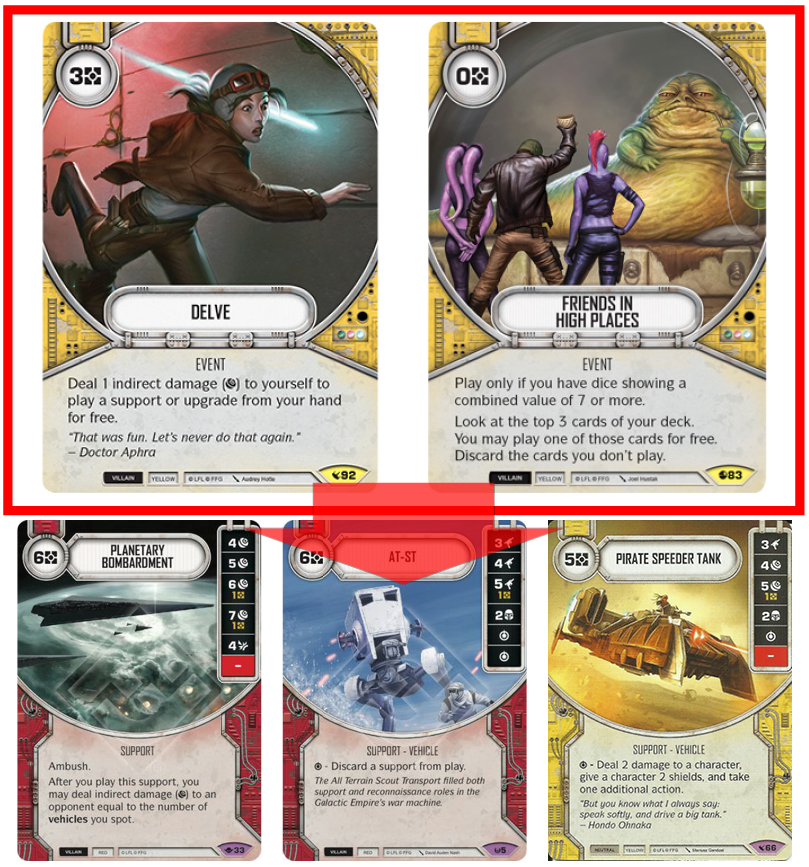 Your supports are there to win you the game, everything in the deck evolve around facilitation this win condition, which is why we only have 6 dedicated removal cards, plus a Dark Ritual (and the Power Action on the Slave 1).

That is really light, but we are playing with the mindset, the best form of mitigation is to kill the opponent. If your opponent cannot kill a character, next action, then try to build your board, or do damage in return. There is no particular synergy in the choices made, and any could be switch out for any other. From the initial build, I switched one Beguile for a The Best Defense… and it did fantastic against the various mill decks I faced. Hitting a Friends in High Places, and seeing Dark Ritual flip over, can be soul destroying for you opponent, as it means you get a whole new round to smash face.

Force Illusion is perhaps worthy, as in so many other decks, of a spot, however in our local testing whilst playing many mirror matches, it never snug in. With two Friends in High Places, and Force Illusions to boot, you can quickly burn through your deck.
5. BATTLEFIELD:Needless to say ... really ... you run Weapons Factory Alpha! 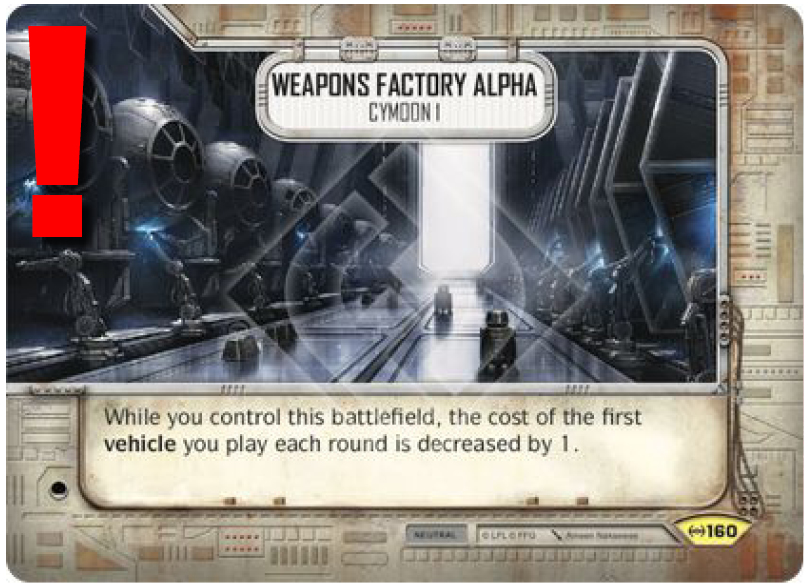 6. MULLIGAN OPTIONS:In an ideal world, you are chasing a Chance Cube, and two supports on turn one.

How you get there is irrelevant, with the low level of mitigation we have, you need to come out swinging hard and fast. The Chance Cube allows you to pile the pressure on, by either hard casting Vehicles, or reactivating them to make one do the work of three.

Apart from the Chance Cube though, the only other card we try to mulligan for, is the AT-ST, when facing a support driven deck. Twice in the swiss, getting one out early won me the game, first against a fellow Crotch Rocket in round two, and being able to take out Steve Thompsons 0-0-0 in round 8.