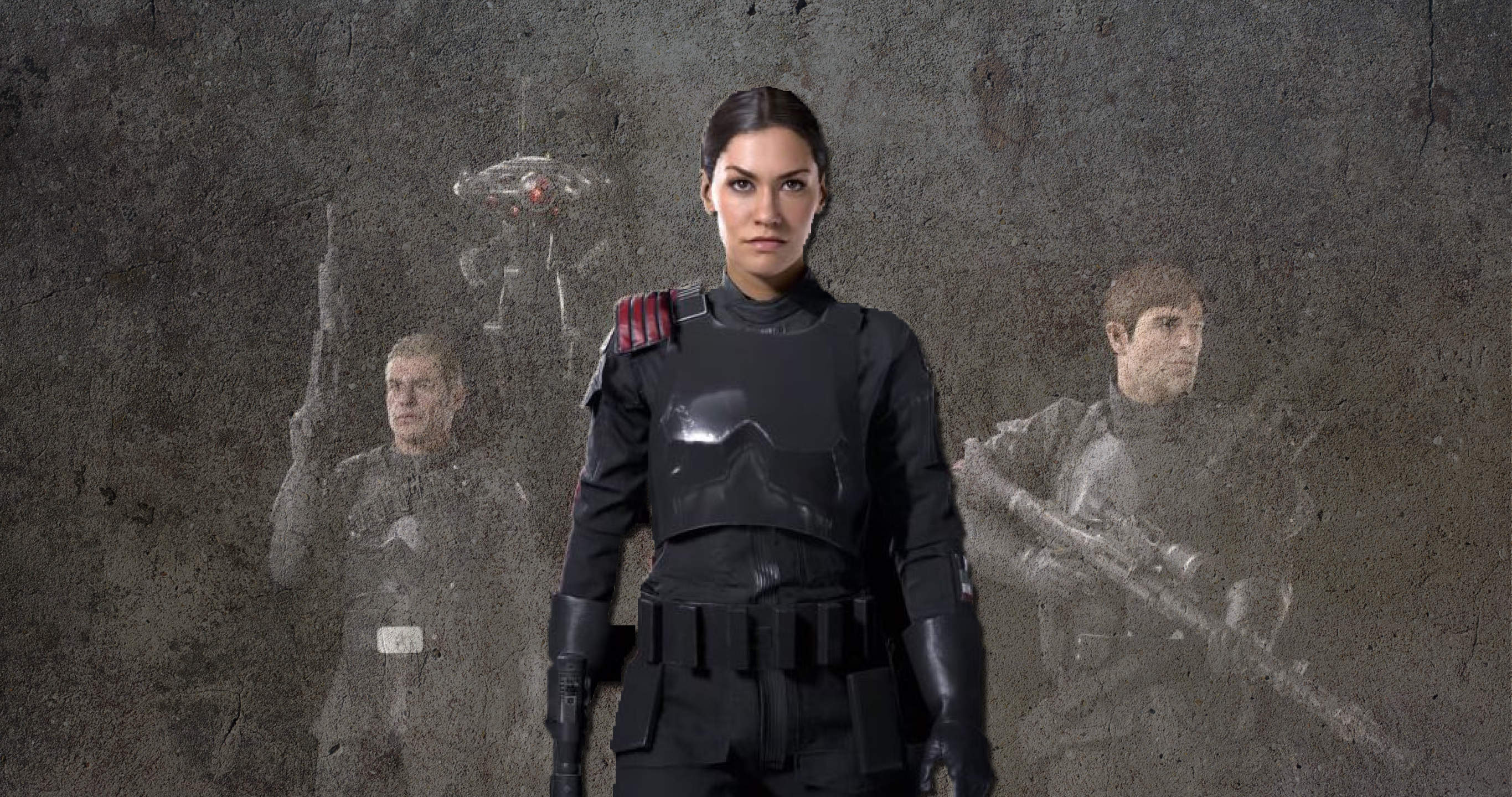 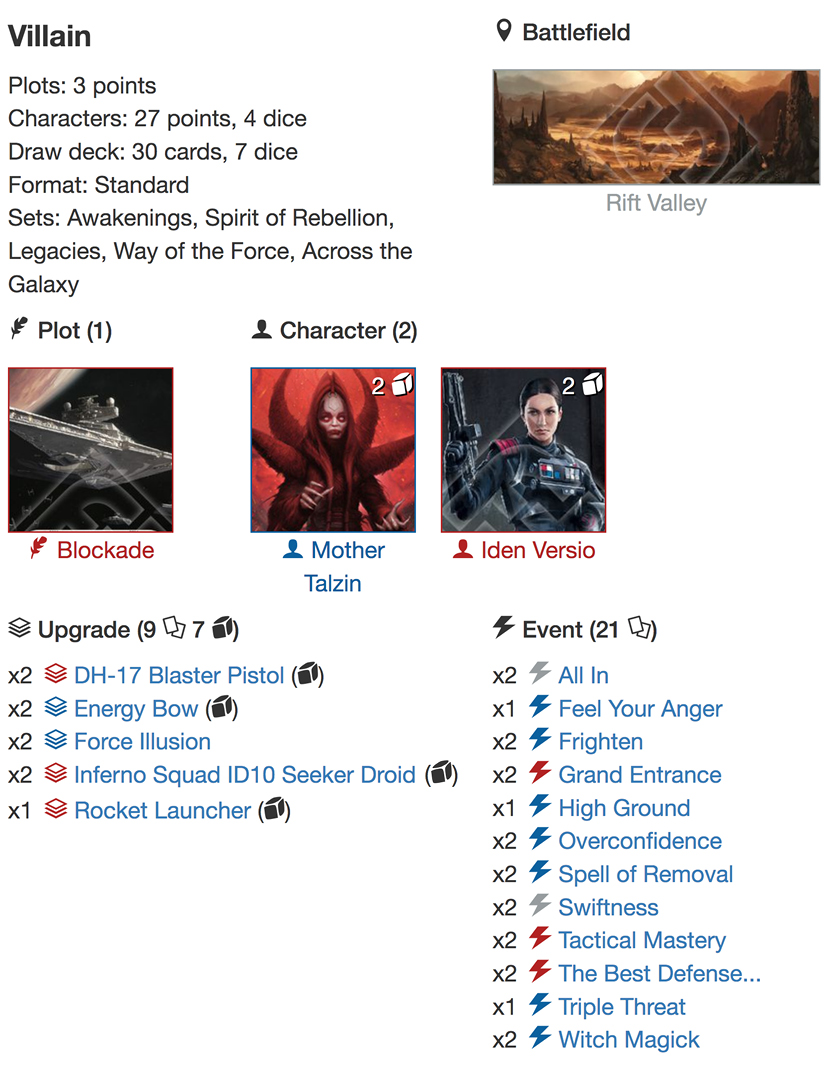 1. GENERAL COMMENTS:
Mads Utzon playtested this deck leading up to French Nationals 2018, and while it didn't make the cut at that time due to the pure oppressive power of Thrawn/Snoke, the times they are a changing and it might just be the right moment for a pure aggro style deck like this.

The deck feels similar to the eTalzin/eBeckett deck, which we did a deck analysis of some time ago, and while they do have the same feel to them, this is a much purer aggro deck. It's actually beefier, but can at times feel more squishy because managing resources is more difficult. You need to set up your game plan and follow it.
2. CHARACTERS: 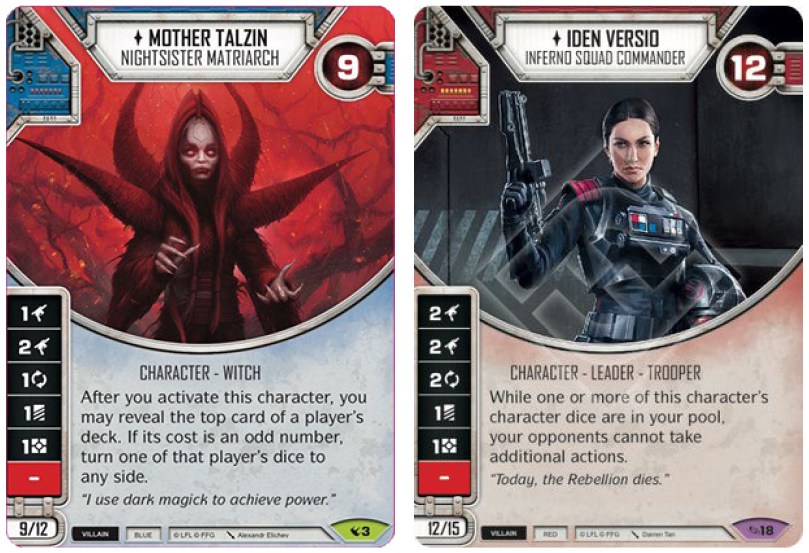 Mother Talzin has for quite some time been the go-to character for a number of villain decks! She offers consistency, while her points cost, 9/12e, allows her to slot into 3wide decks as well as be the sidekick in a number of 2wide decks as well. She's also a squishy character, and had it not been due to Witch Magick, she might not have received the love she actually deserves. Witch Magick though does change the equation quite a great deal for the Nightsister Matriarch. Rather than being a 9hp character, she's closer to a 11hp character, which is outright broken for the points cost.

This deck is pretty focused and built entirely to support Mother Talzin's ability and the Battlefield choice.

With 100% odd costed cards it means you are ALWAYS going to hit with Mother Talzin and if you get to claim on your Battlefield you also ALWAYS get to remove a die showing a value of 2 or lower.

It also put pressure on your dice. Although consistent and endowed with a decent amount of Focuses you are also looking to deal 6-8 damage per round, which means that you need your dice to perform. Killing a character round 1 (low health) or round 2 (mid health) is paramount.

Iden Versio has an incredibly powerful die and slots in perfectly with Mother Talzin. Her 2 Focus side is amazing for All In plays and can as easily trigger 6 damage with a Tactical Mastery. Her 12 health means that she has staying power and can take a hit from a The Best Defense... and still last until midgame (possibly aided by a Force Illusion or Witch Magick). If the meta changes towards a fastpaced Force Speed driven game then her Special Ability will also come in handy.
3. PLOTS:With the character team coming in at 27 points, it leaves space for one of the powerful plots, with the 3 best suited all being defining for where you wanna go with the deck:

PROFITABLE CONNECTION opens up for full (ab)use of the Holocron Package, being able to either play Force Abilities using the Sith Holocron, or failing to draw those early, just play them on Talzin as early as round 1. It also allows inclusion of expensive upgrades, or even a Vader's Fist, while giving you more flexibility to both play upgrades and mitigate.

ARMORED REINFORCEMENT would be a totally different direction for the deck, and one which is definitely worth examining. There are several interesting vehicles for a blue/red villain deck that can all be played round 1 using the plot and possibly combined with Weapon's Factory Alpha, i.e. Umbaran Hover Tank, Count Dooku's Solar Sailer or even something as wacky as Darth Vader's TIE Advanced, which might even look pretty menacing in a deck that can burst a lot of focused damage, while you could even go the route of TIE Fighters for a lot of sustained pressure early on (and they look pretty decent with the Focuses around).

BLOCKADE, which is what we chose for this deck list, is NOT just a reverse Profitable Connection, it is rather a way to force your opponent into playing a different kind of game altogether. It severely hampers upgrade decks, while helping you to get more effective rounds by ensuring they are limited in their options for mitigation and might be forced into early rounds of harvesting resources over dealing damage, while also limiting the effectiveness of their hand. If you can't play cards, they are all dead cards.
3. UPGRADES: 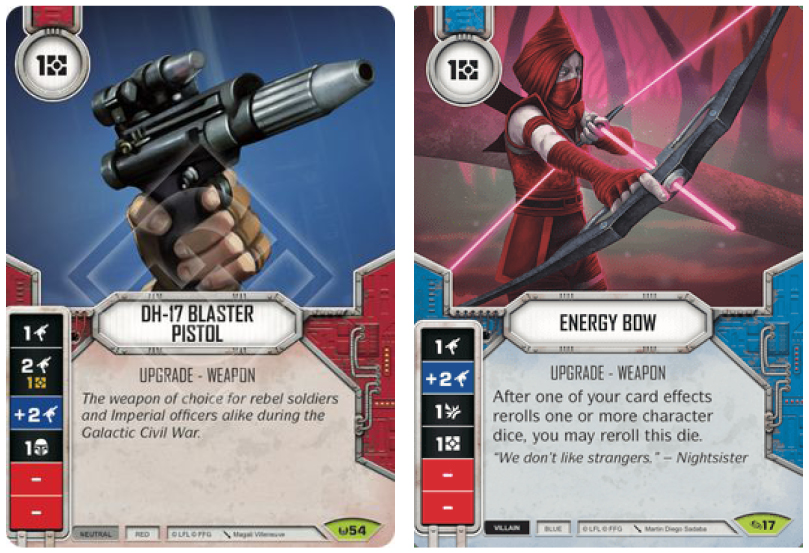 The DH-17 Blaster Pistol and the ENERGY BOW fills the same slot in the deck, and although the latter is lacking the 2 Ranged for 1 resource, it still has a really strong die which can easily be fixed by Talzin if needed and has the potential to become a favorite for villain ranged decks, and generally looks strong in any version of Talzin/x decks. You are always aiming for the +2 Ranged side, and should use Talzin's ability to turn any of them to that if you are already showing a base damage side. Any of the two upgrades allows you to up your max. damage output to 10 Ranged damage, which is super powerful.

FORCE ILLUSION
It's not an "upgrade", it's a mitigation card. I like it, as does any Destiny player (or hate it depending on what side of the fence you're on) because it's proactive, can take a tons of damage and not dependent on any play restrictions or favorable die results.

INFERNO SQUAD ID10 SEEKER DROID
The Inferno Squad ID10 Seeker Droid might be a unique upgrade, but it's still worth including two! It has great value, comes with a ridiculous die for the points, with 5 great die sides, while the Melee damage can be fine in a pinch. The Special though is where it shines. Hand knowledge AND the ability to remove ANY one card from your opponent's hand - that's just broken. It eclipses Maz's Goggles, Friends in Low Places, etc. and offers a great deal of versatility. Being able to remove mitigation, high risk supports, i.e. Vader's Fist or Hyperspace Jumps is an ability that cannot be underestimated. 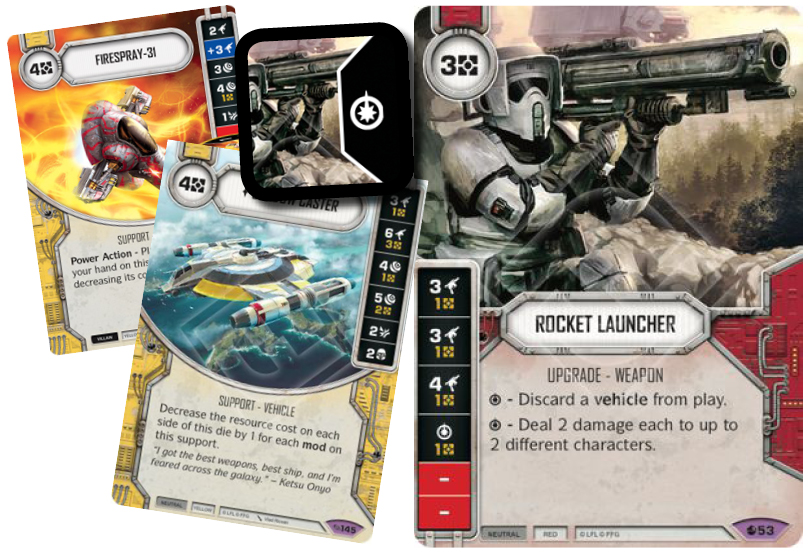 ROCKET LAUNCHER is your only 3cost card in the deck, and is added as a tech card. It's not just expensive to play (and expensive to keep in play since all of the sides are paysides), and will most likely need to replace another upgrade, which then in turn doesn't do any good for your boardstate, but it is a defense against FAT Vehicle decks of any kind. It feels very clunky and in many games is almost a dead card, and depending on how the meta evolves it might find itself on the sideline.
4. REMOVAL:You run 9 removal cards (as well as 2 Witch Magick and 2 Force Illusion), which makes for an extremely dense removal suite. Your priority is to affect as many of an opponent's dice as possible within reach of your resources. You are extremely susceptible to Disrupts, which stops every single mitigation card in your hand except for Force Illusion, which would then have to be used to replace another upgrade.

FEEL YOUR ANGER does look bad at times due to the prevalence of strong dice in the game. The further Destiny moves away from midranged aggro, i.e. a character activating with a bunch of upgrades, putting several dice in the pool at a time, the worse Feel Your Anger gets. It does still have blowout potential which is why is should remain a one-off.

HIGH GROUND has severe play restrictions and can only target dice showing damage, but dealing 1 damage to a character if it removes a character die is really good. You'll often be claiming the Battlefield because you are (should be) a proactive deck, so being able to play it should rarely be an issue.

OVERCONFIDENCE
Although Mother Talzin will most often be the first target of your opponent, it still has incredible value. Affecting two dice for 1 resource is really good, and Iden Versio dice are amazing for the YOUR Destiny trademark "Overconfidence Battles".

SPELL OF REMOVAL is always assured removal as long as you spot a blue character because of the deck construction. Often people tend to dislike Spell of Removal, and some even use the same argument against Force Illusion, because of the fear of "discarding a good card", but that's a totally wrong way of looking at your deck. All the cards in your deck are equally good (or equally bad) as long as it is not the last card in your deck, which is really bad since it stops Talzin's ability and disables your Battlefield.

THE BEST DEFENSE...
Putting 3 damage on Iden Versio is fine as long as it doesn't mean defeating her. The Best Defense... can be an incredibly disruptive first round mitigation card and I always keep it in my opening hand. Iden Versio is fairly beefy and can take a beating. It can even work as a deterrent for an opponent to concentrate damage on Iden instead if she takes some flak early on.

TRIPLE THREAT
It's not the best mitigation card around, but it has a dual functionality that can be used to reroll your own dice then turning one. Play it with Swiftness and you can often find lethal damage that cannot be mitigated.
5. TECH CARDS:

ALL IN and TACTICAL MASTERY occupy the same slot in the deck. They give you rounds where you can utilise the big Focus sides on Iden Versio for unmitigable damage or if already showing damage on the character dice on one of your characters, use Tactical Mastery to activate the other (preferably Talzin) and sink a huge chunk of damage into your opponent. Because your deck is almost exclusively ranged damage, you can easily annihilate characters.

SWIFTNESS
Can be played with a variation of different cards, ranging from GRAND ENTRANCE to Tactical Mastery or Triple Threat or to play a Force Illusion then claim or deal damage. It should be reserved for the situations in which your odds are good to excellent at killing off characters. Playing Swiftness into any card usually means that you deplete yourself of resources, so no mitigation cards can be played. Killing a character then becomes your mitigation!

FRIGHTEN
So, shield hate hasn't really been a thing lately in the meta, but often people pick up Shields against an aggro deck like this. They know that you can suddenly out 6-8 damage into them and they also know it might be unmitigatable, which then means that shielding up is a proactive way of countering one of your strongest assets. Frighten is your counter to the counter.

WITCH MAGICK ... well ... it's magic! You always heal 3 damage with it. USE IT and don't let yourself be caught off guard and lose Talzin due to bad sequencing!
6. MULLIGAN OPTIONS:

This hand gives you a lot of defensive and offensive options. Allows you to improve your boardstate, maintaining pressure on your opponent, while also giving you a lot of possibilities to interfere with your opponent's dice and disrupt his game plans.
7. RIFT VALLEY

I do believe that RIFT VALLEY is unrivaled as the Battlefield of choice in almost any Mother Talzin deck! This is a fast deck, it resolves fast doesn't have paysides, so you don't need to pick up resources before resolving your dice, and very few interactions save for proactive mitigation and Rift Valley is ensured free mitigation!