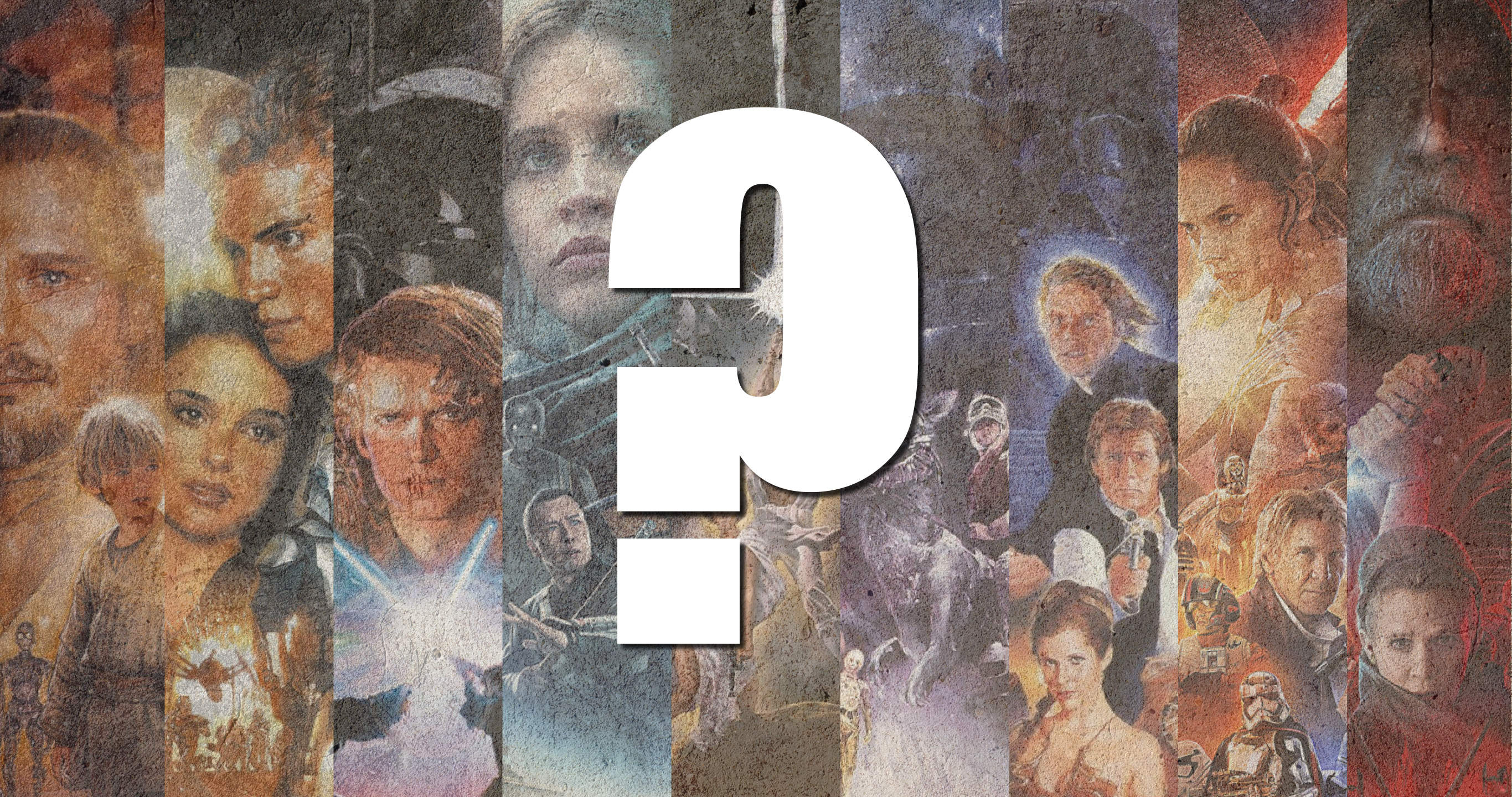 A. INTRODUCTION:If you are a completely new player to Destiny, I'll recommend you take a look at our "Ultimate Beginner's Guide for Destiny", while for the purpose of this tutorial I'll assume you've already familiarised yourself with the Rules Reference and Holocrons maybe even started building a few decks on your own and got some games under the belt.

Most of what is written in this analysis will be extremely "square", and while games normally evolve in very diverse patterns, this is meant to be a template for understanding the key concepts of the deck archetype and the choices involved in playing the deck!

B. TERMINOLOGY:BOARDSTATE refers to the quality/quantity of each players side of the gaming board. How many characters in play, how many upgrades, number of resources and dice in play.

BIG/LITTLE refer to a character team or pairing with a main character (BIG), usually with high health and great character dice, while the sidekick (SMALL) usually has much lower health and relatively poor dice.

2WIDE, 3WIDE, etc. refer to the number of characters in a team. So, if you play 3 characters, i.e. eSnoke/eBazine/Battle Droid, you would be playing 3wide.
C. DEFINITIONS:Sometimes, and in most of our deck analyses, you'll hear various decks referred to as:
This list is not an exhaustive list of all the deck types in Destiny, but cover the most common archetypes. In the following I'll try and go through these archetypes and give examples of how the decks work and how you play them.

CLICK THE ARCHETYPE to go straight to the analysis of that archetype (feature will be fully available when all articles have been released!).
1. AGGRO DECKThe "Aggro deck" (Aggressive Deck) or the "Rush deck" is as the name implies an archetype of deck that aims to deal as much damage in the shortest possible time to defeat all an opponent's characters. Now, you could of course claim that it is the goal of any deck, mill decks excluded, but the "Aggro deck" is constructed specifically for this purpose and the deck has a fairly narrow framework. This does not mean that it is easy to play, although probably the most "beginner friendly" archetype, but the deck is constructed around a shell which is easily identifiable and constructed single purposedly.
2. CHARACTER PAIRINGS:Pure "Aggro decks" are normally, but not exclusively, 2 character pairings, either Big/Little or Middle/Middle, with both of the characters capable of dealing damage, although the support character can be one who very clearly facilitates the win condition most often by ensuring consistency, i.e. Yoda or Snoke. 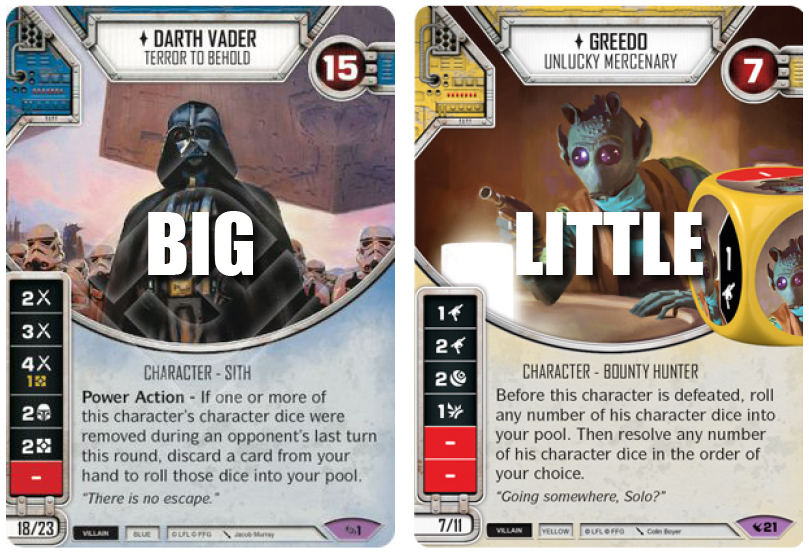 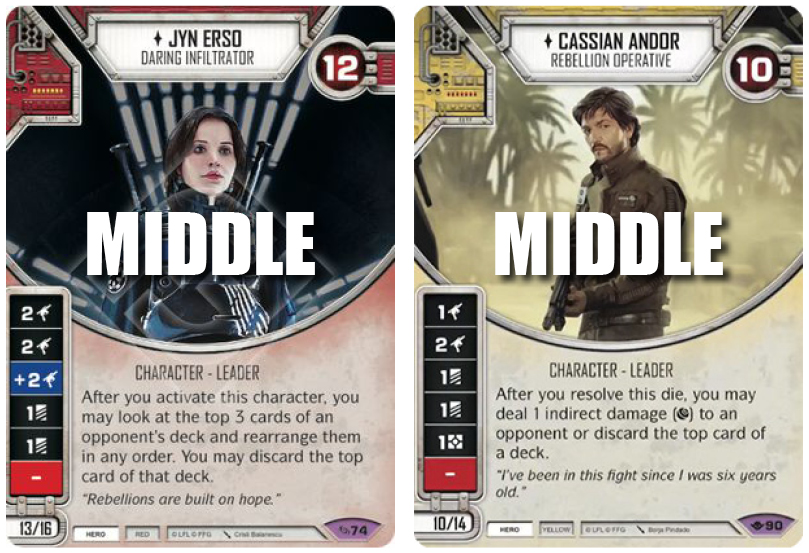 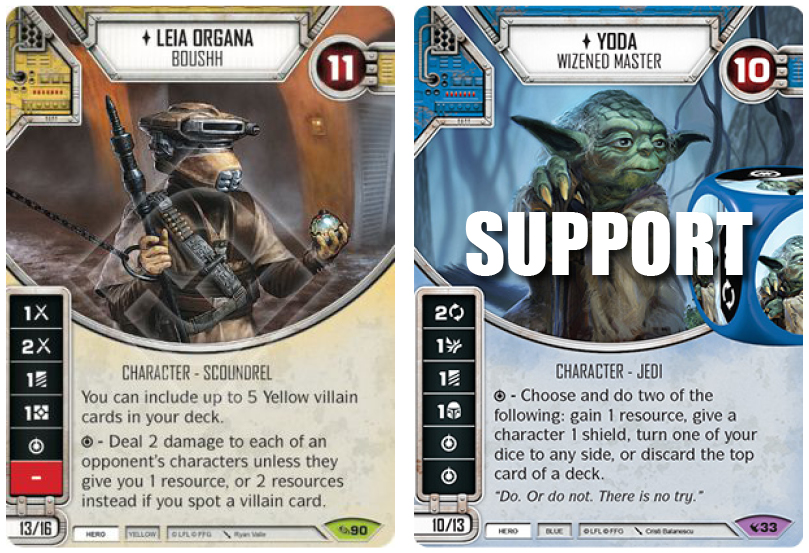 3. DAMAGE TYPES:Pure "Aggro decks" often aim at having the "same" damage type across all characters and upgrades, with few exceptions. This means that you do not only resolve your dice fast, but will also find it easier to combine various base damage sides (black damage sides) with modified damage sides (blue damage sides). An example of this would be a Jyn Erso/Cassian Andor deck (where one of your characters has a Hidden Blaster attached).

Because of the many shared Ranged damage sides across characters and upgrades, they will be easy to resolve meaning you don't need to reroll in order to get the results you want: Ranged damage! Discarding cards to reroll slows you down and offers your opponent more chances to interact. The latter is said knowing that you will often be discarding aggressively to improve your dice in the rounds where you are on the bad side of variance (read: you roll non-damage sides). Which in turn means that you need to keep an eye out for the state of your deck (don't let yourself be milled out).
4. UPGRADES:"Aggro decks" are normally fairly upgrade light, aiming for 6-8 upgrades, most of them will be weapons that can help facilitate your win condition: defeating all of an opponent's characters. 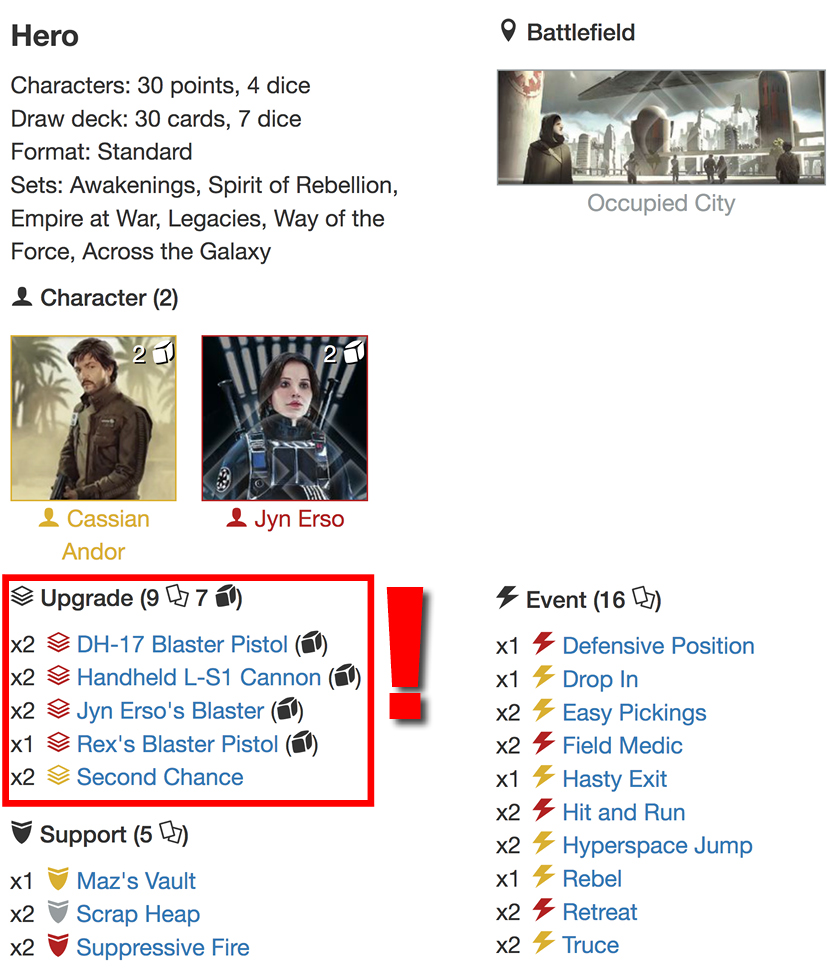 At the Las Vegas Regional 2018 (Across the Galaxy meta) "mattistyping" took the above list to top4 and it follows a strict "Aggro deck" template. 9 upgrades, of which 7 are weapons and all of the guns sharing damage sides.

Your aim is to upgrade early in the game (priority is a round 1, turn 1 weapon), often meaning that no resources are left for mitigation, and by doing so you force your opponent on the defensive. Being the aggressor means you try and force your opponent into spending his resources on mitigation, if he has any, limiting his possibilities to improve his own boardstate, while constantly pressuring him by threatening to put damage on his characters.

For a pure "Aggro deck", defeating a character is the "best kind of mitigation". That is, by killing a character you remove all of that character's dice from the game: permanently!
5. SPEED:While speed is not essential it can definitely help to facilitate your win condition, and keep your position in the game as the aggressor, in two ways!
The various kinds of "Speed cards" follows the two points above and are for point (1) cards like:

All of the cards allow you to take multiple actions, either a). Activating a character OR b). Manipulating dice and c). Immediately resolve dice, while cards that supports point (2) include: 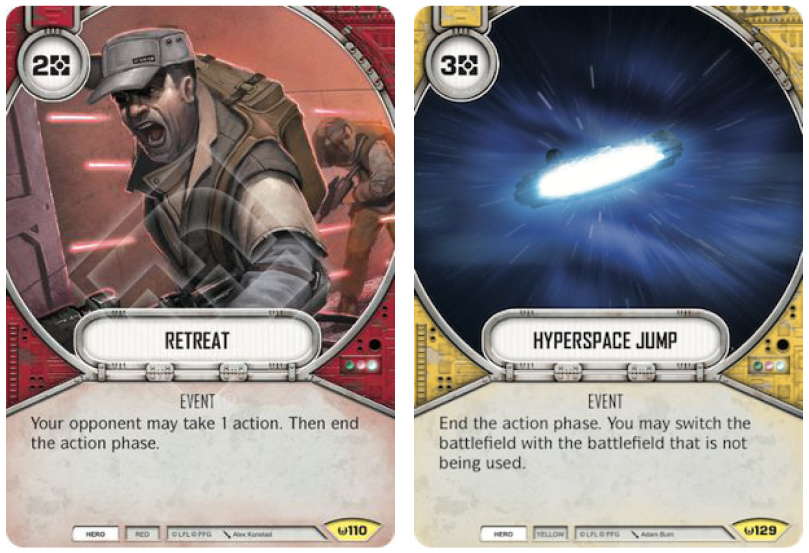 These cards are among some of the most powerful in the game because they allow you, the faster deck, to take the actions needed to further your strategy, i.e. play upgrade, activate, deal damage, while a slower opponent might need double or even triple the amount of actions to assemble his own strategic pieces, i.e. for a vehicle deck: play upgrade, focus die sides, gain resources, play vehicles, activate vehicle(s), resolve dice.
6. MITIGATION CARDS:"Aggro deck" run cheap mitigation suites. Most "Aggro decks" don't have the time to pick up resources, and will normally only do so, when it is absolutely necessary, either to be able to play specific cards, i.e. to Hyperspace Jump, or when there are really no other better choices. Good mitigation cards for "Aggro Decks" follow your deck's design template, like:

All the mitigation are 0cost events, which means you can start a game by playing a 2cost upgrade, and still be able to mitigate dice without having to resolve resource sides first. It affects a single die and in most instances it removes it from the game, which is important against decks that are looking to manipulate their dice, i.e. Focus them, in order to maximise their effectivity each round, which is particularly true for Vehicle decks and Mill decks.

You will rarely see 2cost mitigation in "Aggro decks", and more often than not they will be dead cards in your hand because you cannot afford to play them.

Your priority will ALWAYS be to play upgrades before mitigation. Most "Aggro decks" will not be able to push through the damage needed to win games without upgrades in play.
7. RESOURCES:Resource management is difficult in an "Aggro deck". You don't want to spend too many actions and dice picking up resources, as every die which is not spent dealing damage is wasted. It's obviously not always like that, but it's good to get your mind straight on what you want to achieve! 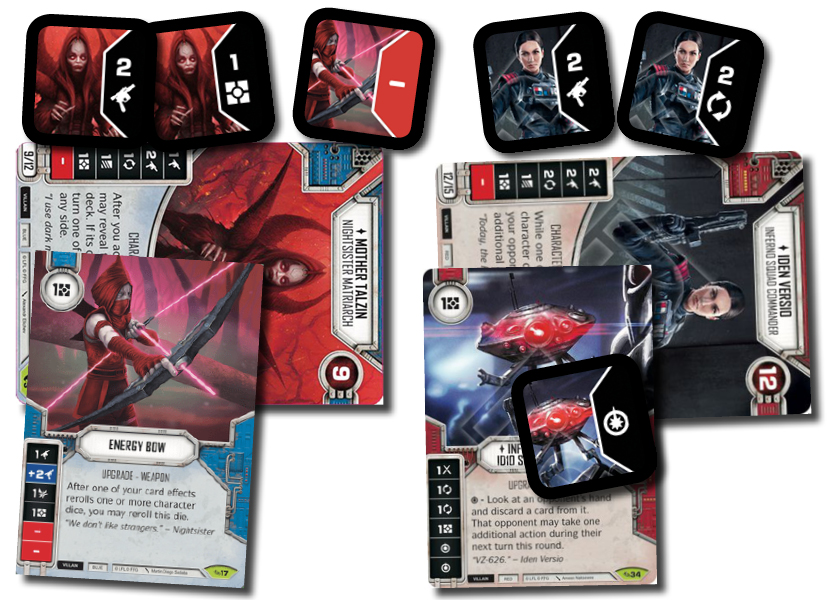 In the above example, resolving the Mother Talzin resource side would drop your damage output from 8 to 6 Ranged damage, which is bad in a situation where you could have almost maxed out on damage.

There are a number of cards which can help you solve the resource management problem though:

Both Maz's Vault and Truce allows you to gain extra resources without any tempo loss, while Logistics does require resolving a die, but at least you up the benefit of it.
8. TECH CARDS:
"Aggro decks" will often include tech cards that can also deal damage (often referred to as "damage out of hand"). By either manipulating bad die sides into damage sides, deal damage multiple times with the same die, or ignoring/removing shields you improve the rate at which you can defeat characters. You are already playing a game with relatively few dice due to your low number of upgrades, but most of them will be high quality dice with good sides, so getting the most out of them will be paramount to your success.

Tech cards can include: