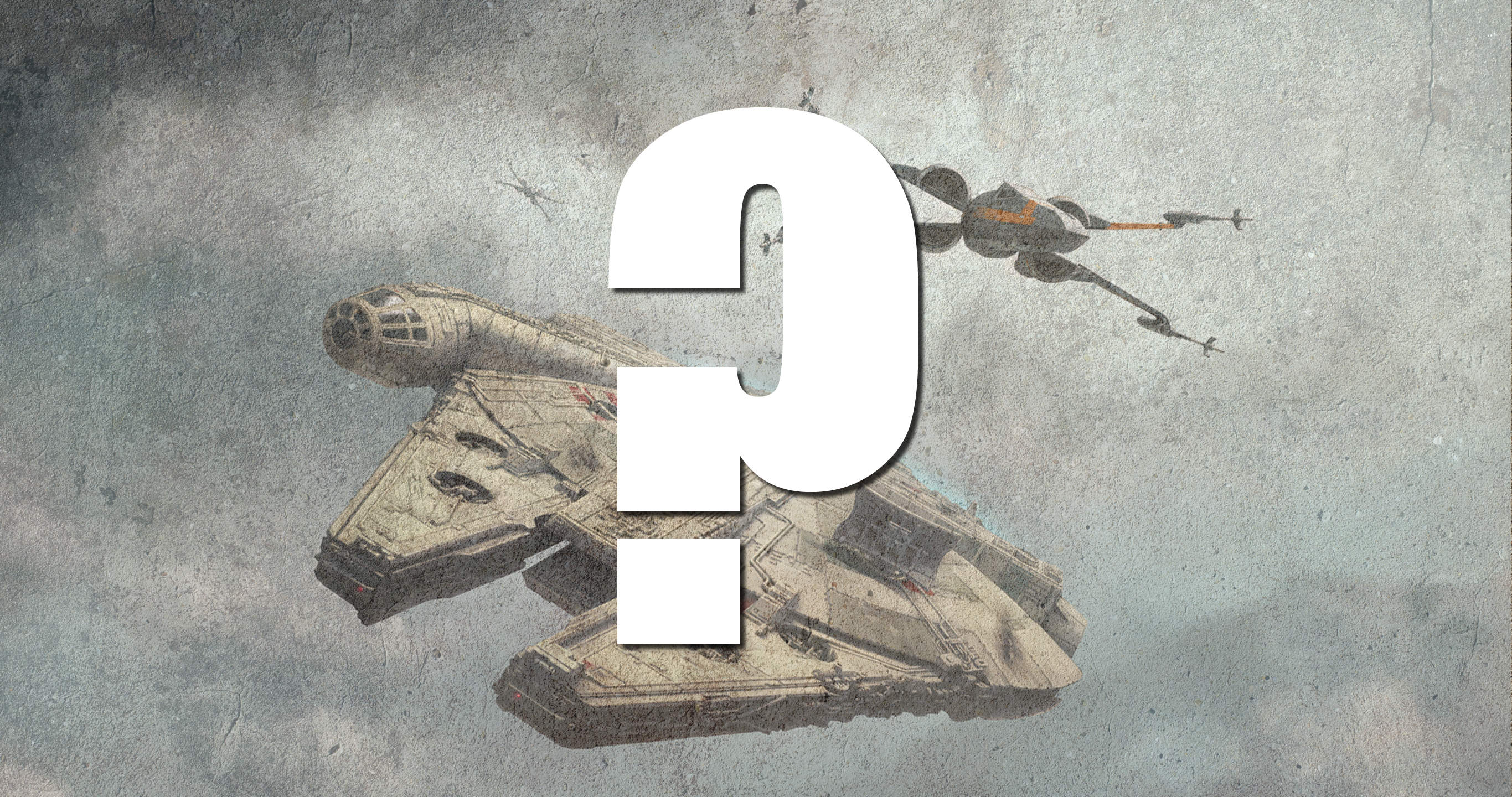 CLICK THE ARCHETYPE to go straight to the analysis of that archetype (feature will be fully available once the entire article series has been posted).
C. TERMINOLOGY:a TUTOR is a card that allows you to look for a specific card in your deck. It an be specified on the tutor which type of card you are allowed to search for.

BOARDSTATE refers to the quality/quantity of each players side of the gaming board. How many characters in play, how many upgrades, number of resources and dice in play.

HOLOCRON refers to the erratas and clarifications to cards already printed. You should always familiarise yourself with the newest Holocron.

2WIDE, 3WIDE, etc. refer to the number of characters in a team. So, if you play 3 characters, i.e. eSnoke/eBazine/Battle Droid, you would be playing 3wide.
1. FAT VEHICLE DECK:The "FAT Vehicle deck" refers to a deck type which gravitates around bringing a single support: vehicle into play as early as possible and attach mod upgrades to it, thereby making the vehicle FAT, to make its impact on the game as big as possible by bringing more dice and usually capable of dealing substantial amounts of damage from as early as round 1.

Adding a FAT Vehicle to your deck is powerful because

Adding a FAT Vehicle to your boardstate is massive as it often comes with inherently powerful dice and abilities, while the mod upgrades makes it on par or better than tooled up characters. Even the strongest characters in the game have difficulty keeping up with the sheer brutality or effectiveness of vehicles, while those who can outshine vehicles are extremely expensive and limiting to the composition of your character team (they are simply expensive in points value).
2. FINDING THE FAT VEHICLE!One of the main problems of relying on very few cards to win you games, as is the case with a FAT Vehicle, is to reliably draw them. With 30 cards in a deck and an initial draw of just 5, you are looking at just 17% chance of drawing the vehicle in your initial draw (before mulligan) if you include 1 copy in the deck, while you have 31% chance of drawing it if you include 2 copies. Those odds are pretty poor at drawing the card that is expected to win you the game, which is why adding cards that will reliably make you draw that illusive vehicle is IMPORTANT:

There are usually two ways of making this happen:
The unrivaled tutor in a "FAT Vehicle deck" is Armored Reinforcement. (If you haven't already read our article "Get Your Mod On!", I recommend you do it as it is essentially going through a lot of the ideas behind the "FAT Vehicle deck" as well). 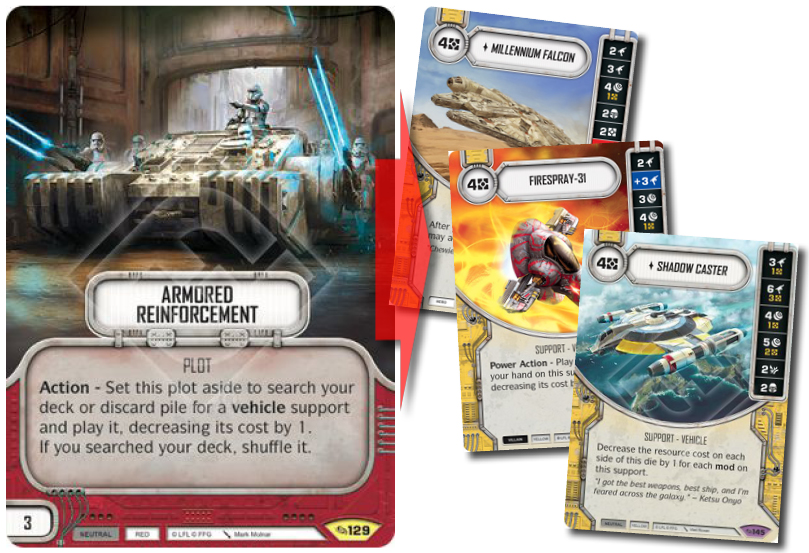 Armored Reinforcement is the ultimate Tutor card, because it doesn't only offer you the possibility of searching for a card, it's also ALWAYS available. You don't need to draw it from your deck like Start Your Engines or Lightsaber Pull, which functionally is an additional copy (third or fourth) of either a Podracer or a Blue Weapon upgrade, and although powerful indeed, it is nowhere near the power level of Armored Reinforcement. 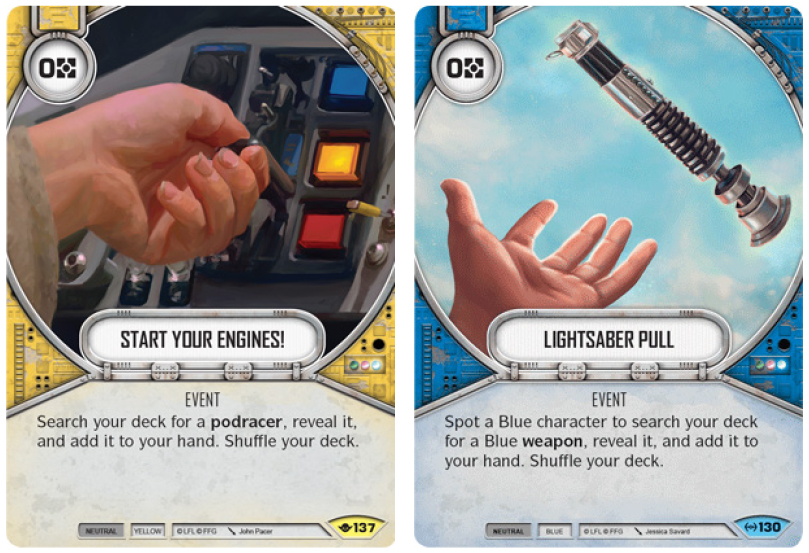 Armored Reinforcement on top of the tutor effect also potentially offers you a card advantage provided you don't already start with the wanted vehicle support in hand, in which case it becomes a "free" discard to reroll (if needed), essentially offering you a 6th card in hand AND finally reducing the cost of the vehicle when you play it by one resource. Both of these effects normally requires the addition of a plot, Stolen Intel and Profitable Connection, to your deck. 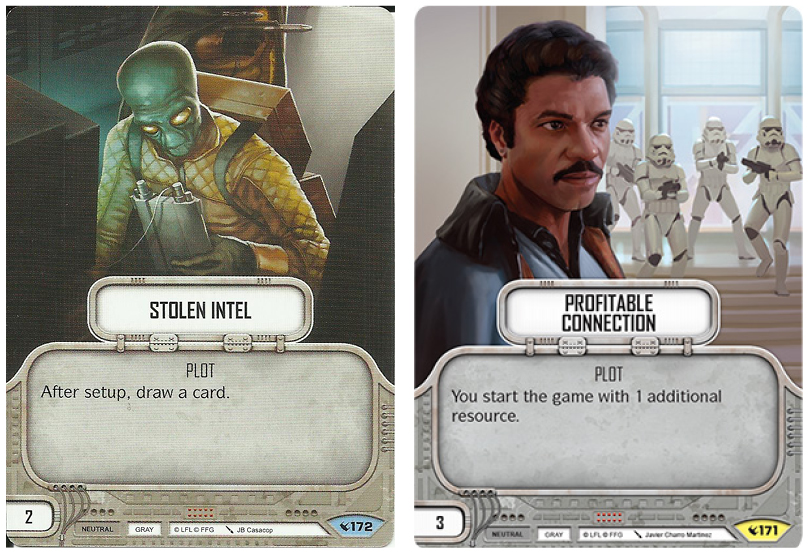 Gaining all of these advantages simultaneously for just 3 resources is pretty outrageous!

MOST "FAT VEHICLE DECKS" WILL INCLUDE ARMORED REINFORCEMENT!

Cards that allows you gain card advantages by drawing more cards or giving you an increased chance of drawing what you need include:

Double Down might not sound that compelling, but adding a third copy of a card to your deck bumps your odds of drawing it in your initial draw (before mulligan) to 41%, while digging deep into a deck with Boundless Ambition (if you draw 5 new cards and didn't find the card - vehicle - you were looking for in your first 5 cards) gives you a 37% chance of finding that card in that draw (provided you have two copies of the card).

Character pairings in "FAT Vehicle decks" (and vehicle decks generally) are often, although not always, characterised by lots of health across the character team. Because the vehicles are going to be effective until all characters are defeated (or the support destroyed) having a beefy character team allows your FAT vehicle more time to perform.

There are some character pairings that go against this tendency, but more often than not "FAT Vehicle decks" will employ 3wide teams over 2wide as the extra health can provide up to an extra turn for the FAT Vehicle to push through the damage needed to defeat an opponent's characters.

4. SPEED:Speed is generally not important to a "FAT Vehicle deck", but there are a few decks (in the Across the Galaxy meta maybe just one deck) where it does make a difference. In this "FAT Vehicle deck" the pace is THE strategic engine! Hit hard, hit fast and get out of trouble using either Hyperspace Jump or Retreat. 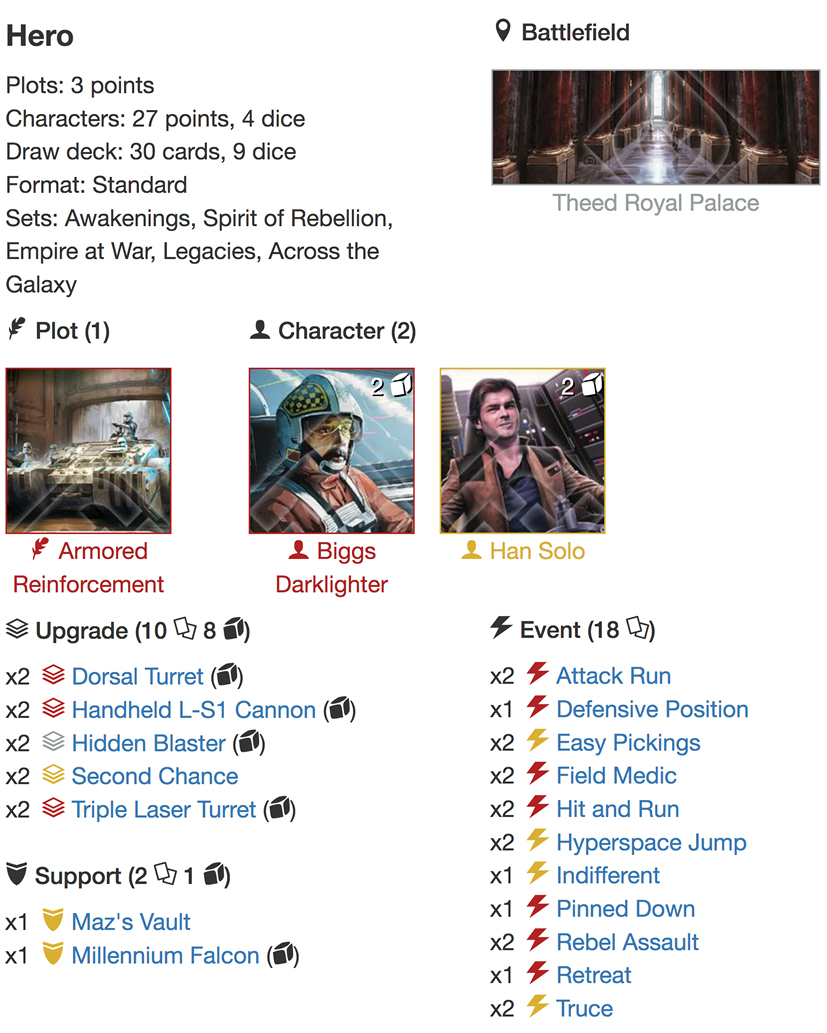 The speed comes from a combination of cards and effects, i.e. Millennium Falcon, Biggs Darklighter, Hit and Run, Attack Run, etc.  that allows for activation of supports and characters while giving Ambush as well. The deck can be categorised as a "FAT Vehicle deck", but plays and feels much more like an aggro deck. 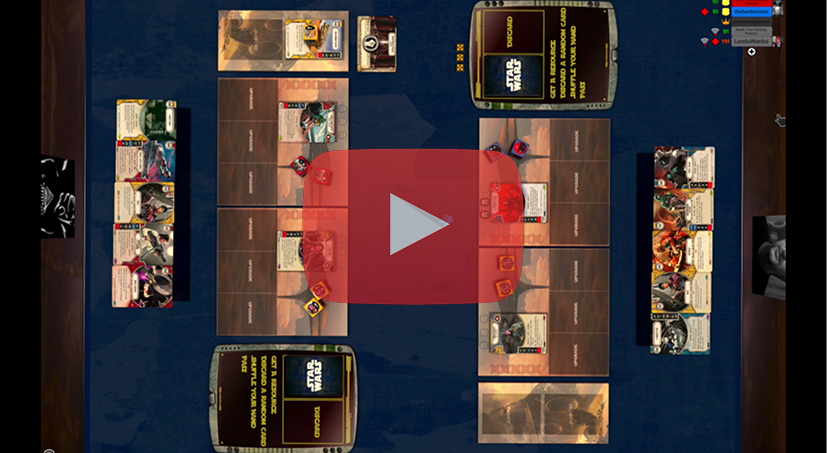 This video (which has previously only been available to our Patrons) both exemplifies the strengths and weaknesses of this particular style of "FAT Vehicle deck". We also did a full deck analysis of it that you might be interested in!
5. RESETTING VEHICLES:
"Resetting vehicles" is a game mechanism in which you ready an already exhausted vehicle to allow yourself to resolve its di(c)e multiple times. This is obviously, taking into consideration how powerful vehicles are, in particular a FAT Vehicle (with multiple dice), a way to add pure destructive firepower to your deck. 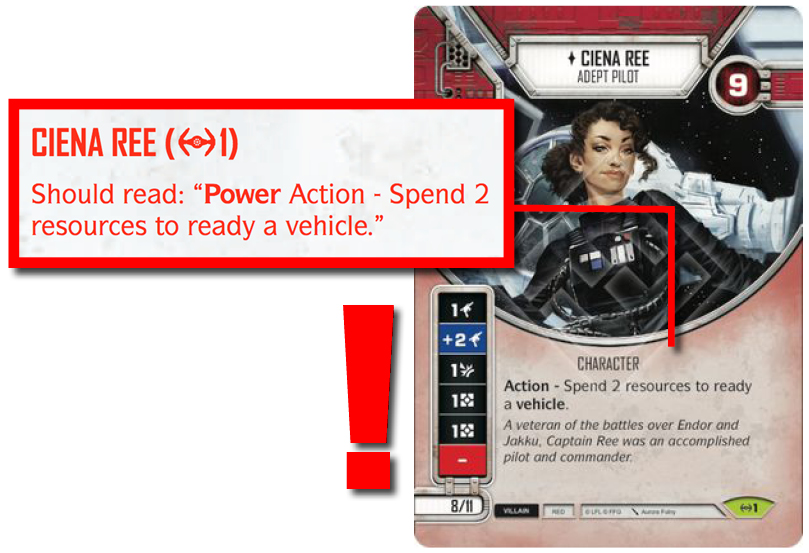 Although the latest Holocron did errata some of the worst abuses of this mechanism there are still plenty of ways to make your FAT vehicle an overly consistent killer machine! Both Ciena Ree and the R2 Astromech still allows you to ready a vehicle, although just once per round, while the  Millenium Falcon can also be reset (readied) for several activations using L3-37. It doesn't require much imagination to see why that's pretty broken!

6. UPGRADES:"FAT Vehicle decks" rarely use upgrades save mod upgrades for the FAT Vehicle. In the instances where upgrades are used they normally supply resources for reset strategies or paying for mod upgrades. Such upgrades include: 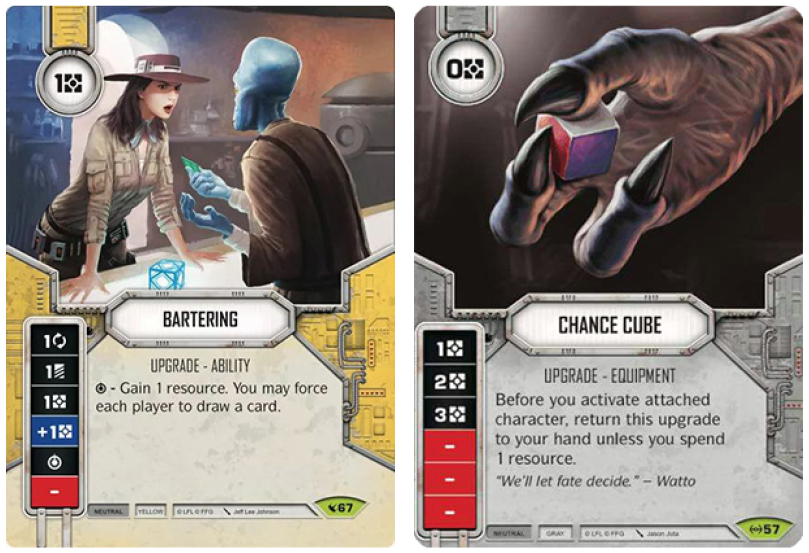 From a simple comparative perspective, you can see why mod upgrades are popular! Just look at the DH-17 Blaster Pistol, universally regarded as the aggro upgrade with the best return on investment, side by side with the Dorsal Turret. 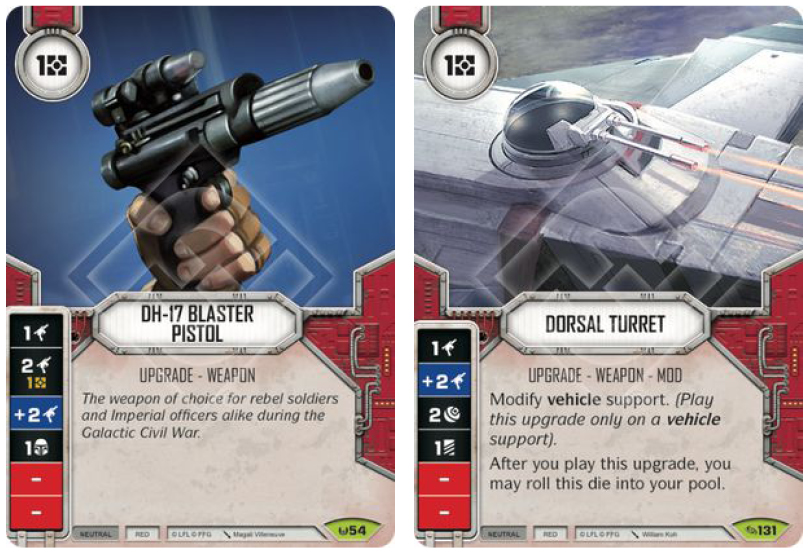 You'll often not be too concerned with adding upgrades to your characters, they are there for their inherent abilities, character dice and to functionally act as living meatshields for your FAT vehicle.
7. MITIGATION CARDS:You are probably running fairly low on resources for the first round, maybe even the second round as well, which means that your mitigation has to be cheap.

This unfortunately bars you from the best mitigation in the game, but there are still some sound choices, particularly since you are often running 3wide teams:

0cost mitigation is not necessarily bad, but of course has to be used strategically well since it often does not ensure removal of a die or allows your opponent options:

Your general strategy is to add dice to the pool that are so powerful that your opponent is forced in the defensive, i.e. has to find ways to remove those dice, which then in turn relieves the pressure on your own mitigation suite (if your opponent constantly uses resources to prevent your from executing your gameplan, his own boardstate will be impeded).
8. RESOURCES:As with any other deck, having a well formulated resource strategy is vital. You are forced into both finding and playing upgrades almost every round, which means that knowing how to do either is essential.

Various cards that can be added to your deck that allows for resource generation, including Battlefields, and while they can be powerful to you so can they to your opponent! Understanding how to get ahead of your opponent is your job, i.e. knowing WHEN to play various cards so as to maximise your benefit and minimise that of your opponent (playing Truce AFTER your opponent has activated all his characters to avoid him playing upgrades and improving his boardstate or Well-Connected AFTER he has claimed out to prevent that extra card to be an advantage for him).