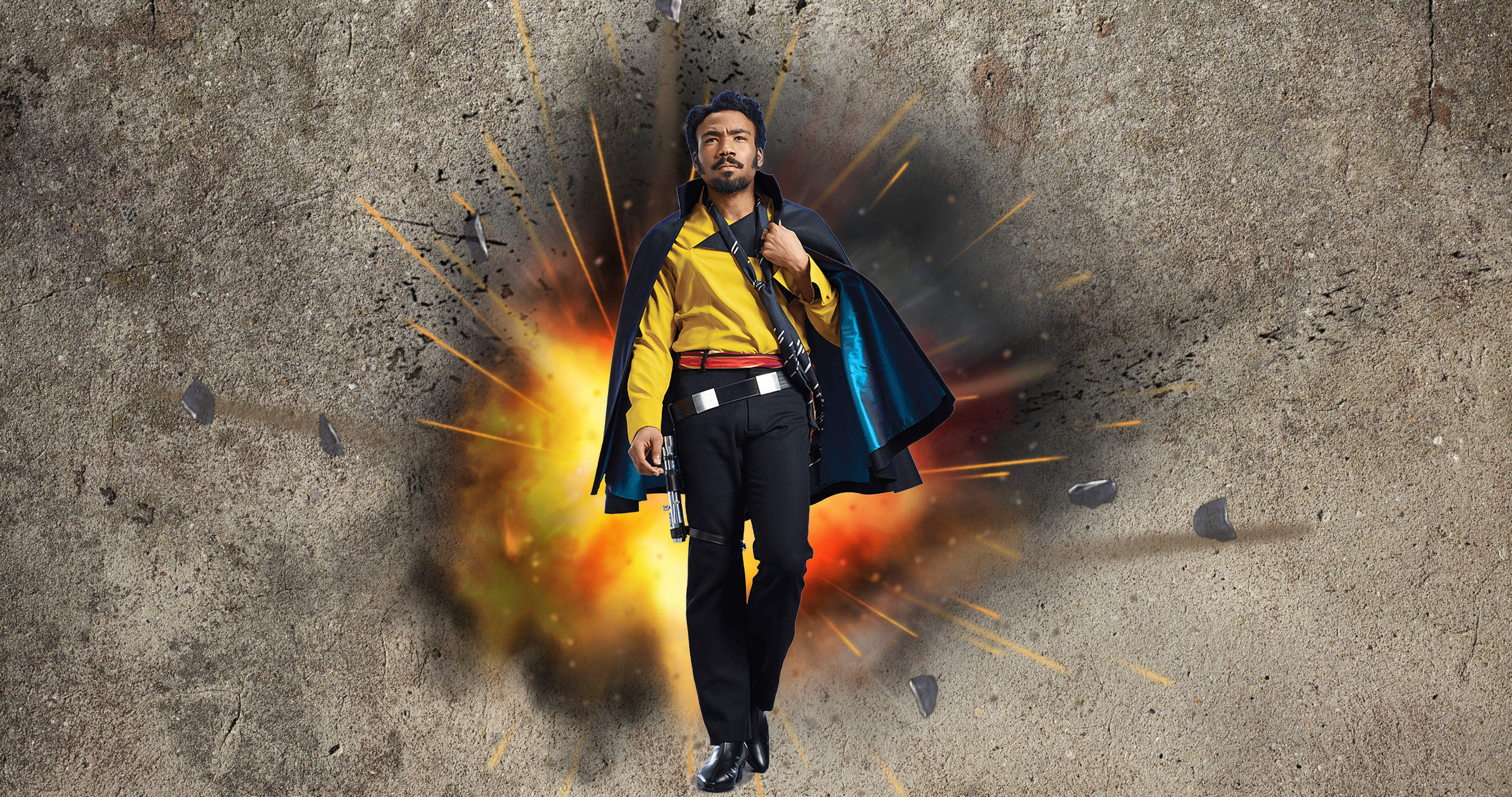 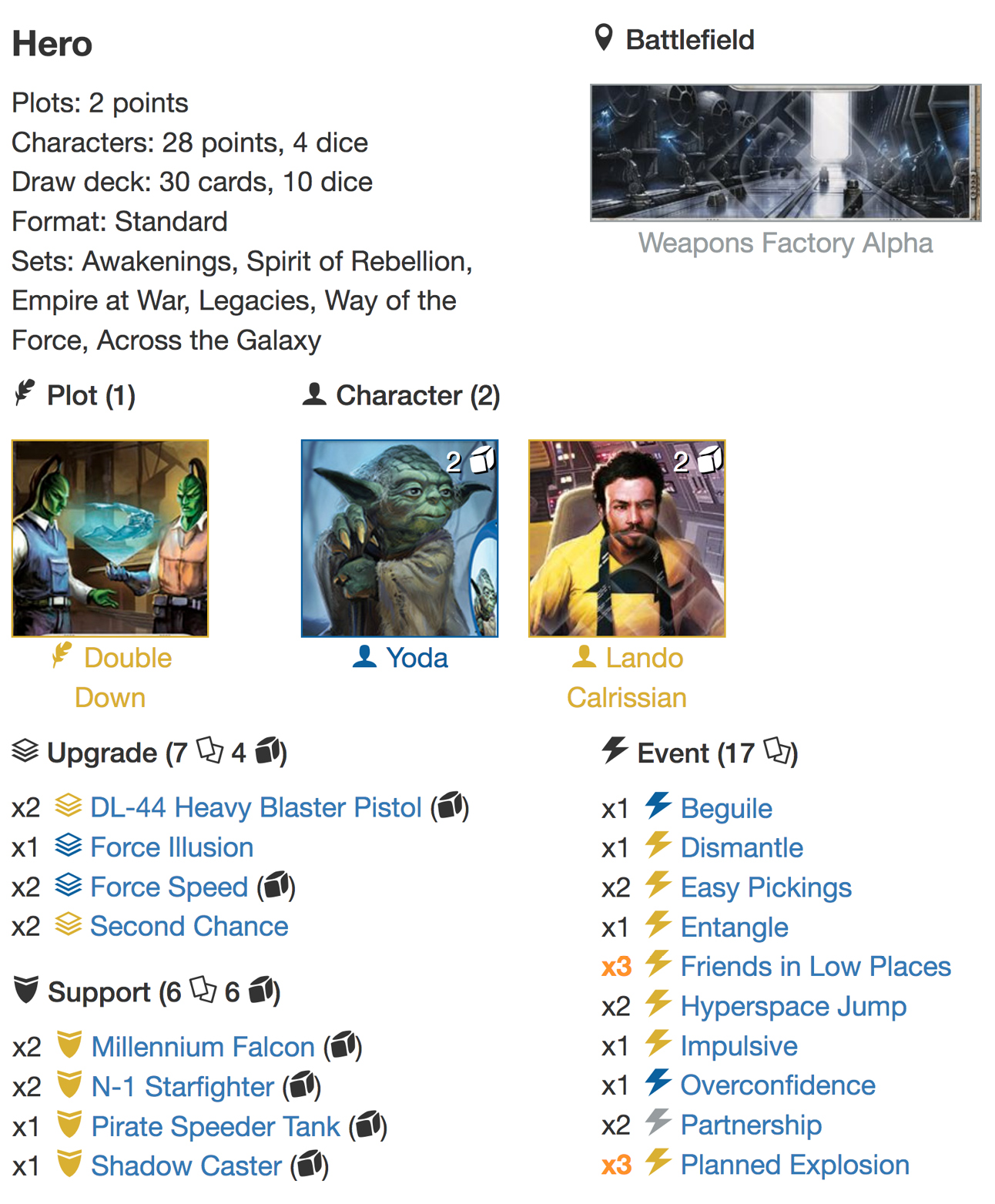 When Across The Galaxy originally was spoiled, one of my sparring partners and I immediately fell in love with Lando Calrissian. We realized that this "Smooth and Sophisticated" guy had everything you ever could want: Decent health, good die sides, a powerful Power Action and a lot of potential pairings with his 15 points elite cost. 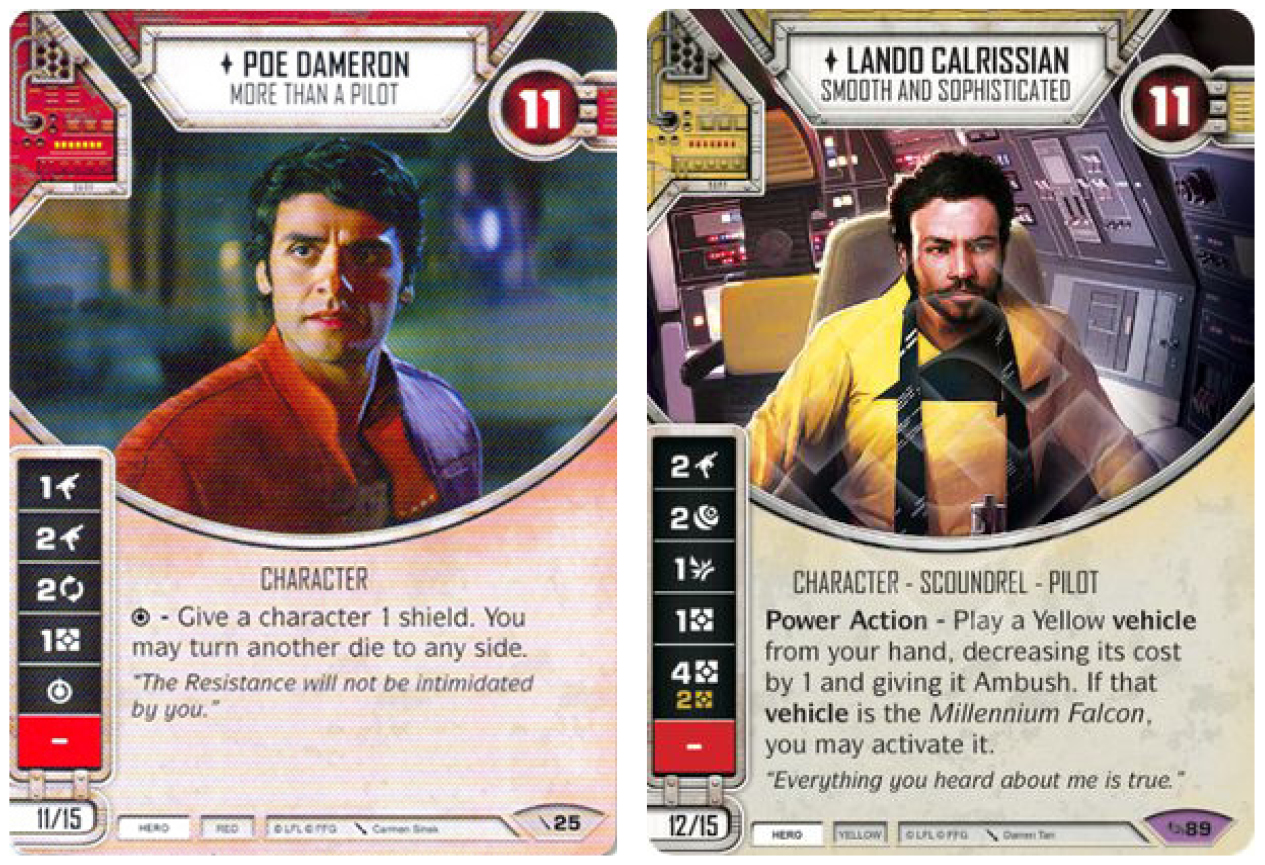 At first we paired him with Poe2 to add red to the mix as well as a bit of consistency. The L-S1 handheld Cannon was so appealing, but finally we realised the character pairing just wasn’t good enough to go survive the meta following the release of Across the Galaxy. It was missing some real consistency and we decided to pair him with the king of it: Yoda.

As I was trying this new version, eYoda/eLando2, I started sensing a real strength in it, unlike many other decks I had tested. Finally, I got more than 200 test games in and managed close to a 75% win rate as you can see in these recorded games. With all this training I managed to build the most perfect list and to win the first Regional I went to last week.
2. CHARACTERS:YODA is just one of the best characters in the game. He brings consistency, money and survivability in a damage deck. Many players hate him and tend to focus him down first which leaves you with your damage dealer for the late game, which is quite good. 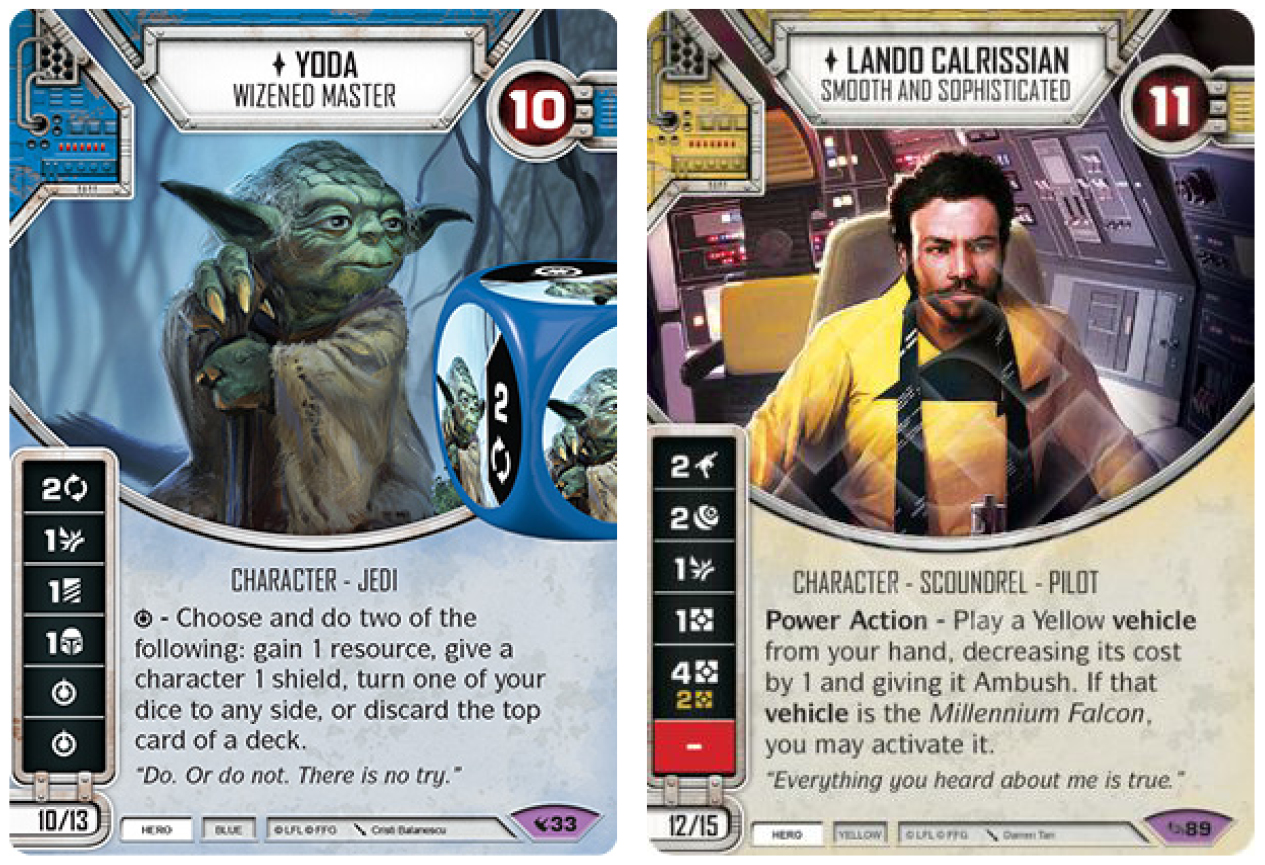 LANDO CALRISSIAN in his newest version feels beastly. He has 11 health points, brings you decent damage and has nice resources sides. His 4 resources sides for 2 resources seems like a drawback at first, but with Yoda and a few tech cards it becomes more of a strength. Finally Lando has his Power Action, giving you 1 free resource each turn (if you play a vehicle) and add a bit of speed for some incredible plays.
3. DOUBLE DOWN:Playing eYoda/eLando lets you play a 2 points plot and I chose to play DOUBLE DOWN which allows you to have 3 copies of 2 different cards in your deck. The plot was a key to the strategy of the deck as I opted to go all in on the Planned Explosions and Friends in Low Places.

PLANNED EXPLOSION is one of the strongest card with Lando. His 4 resource sides functionally becomes a 4 damage side. With all the high value sides in the deck plus the stability from Yoda, you are almost sure to play it once per game. In addition, you can be sure that you will surprise many opponents by playing this card and they will regret not to have control this payed side even if you don’t have the money. 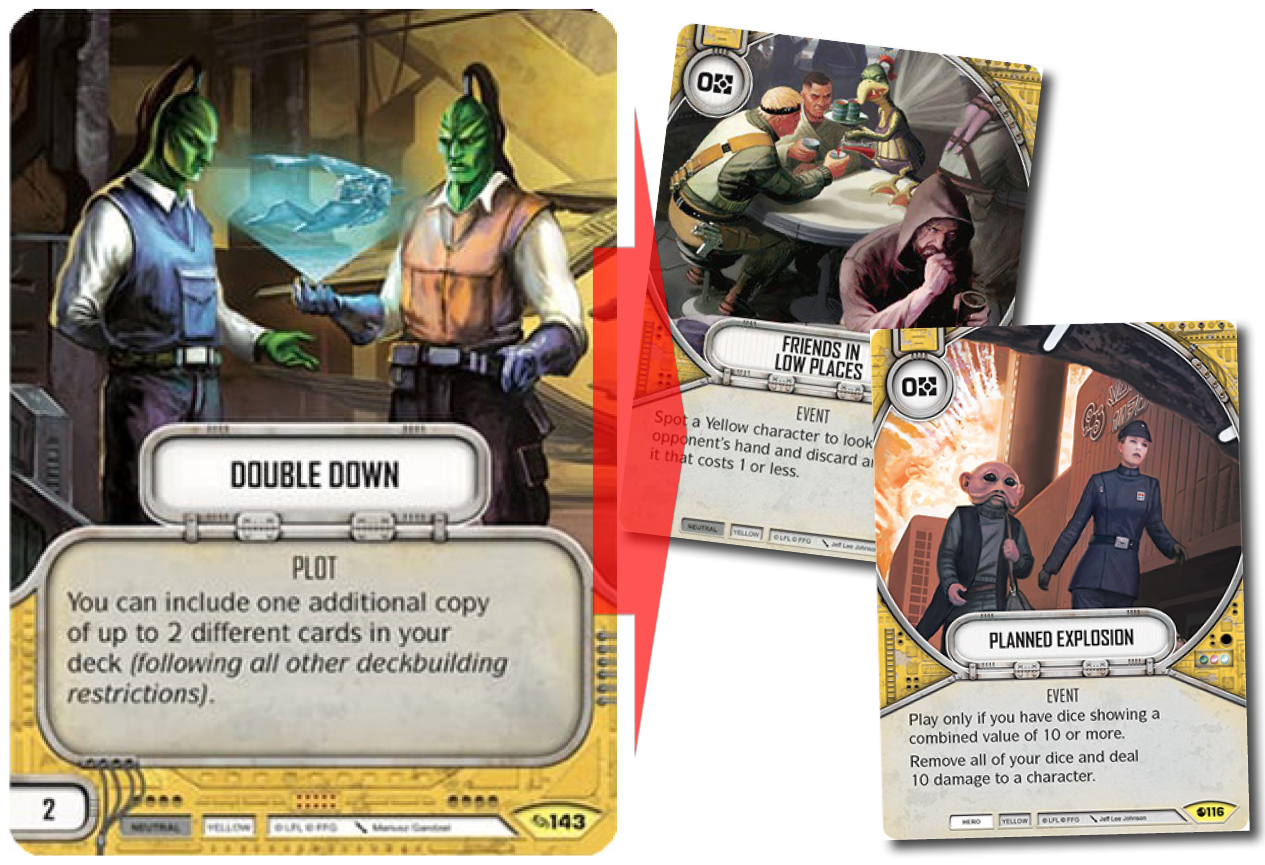 For the second card to Double (triple) Down on, I did a few tests but finally chose FRIENDS IN LOW PLACES. The concept of having 3 copies of a particular card in your deck makes it even more important that you can (and want) to play it at any time. This card is perfect for the slot: It is 0cost, you look at the opponent’s hand, discard a removal and then adapt your game plan. Now you are sure that you can do any focus without being controlled and plan those Explosions (or playing safer if your opponent still got some removal).
4. UPGRADES:FORCE SPEED
No need to present this broken card, 0-cost die has always been overpowered. Yoda with force speed is a well-know combo and no body loves to fight against it. It prevents your second character’s dice to be remove on a god-roll and with some other tricks in the deck list it becomes completly insane. You may consider to play this in 3 copies instead of Friends in low places but I prefer not to do it as knowing your opponent’s hand is far away better in my opinion.

FORCE ILLUSION
The classic big damage breaker is here, absorbing a direct 6 damages from a Shadow Caster is always nice. It prevents you from dying on an action cheat and is also the only protection for your little green man. I play only one copy in the deck because I hate to mill myself.

SECOND CHANCE
Playing Second Chance in a yellow hero deck is not a surprise. The card is strong, giving you a little more time for a good comeback and it is easy to overwrite an upgrade on Lando with it for a free extra 5 health points.

DL-44 HEAVY BLASTER PISTOL
As the deck is planning some explosions, it needs some high value sides like the ones brought by the DL-44. In addition this it offers pseudo removal and no loss of speed. Furthermore once it is on Lando you can easily overwrite it with a Second Chance as said previously.
5. SUPPORTS:Lando’s Power Action is effective only on yellow vehicles so your choices are slim for supports to play. In addition you have to choose which Millennium Falcon you want to play with him. 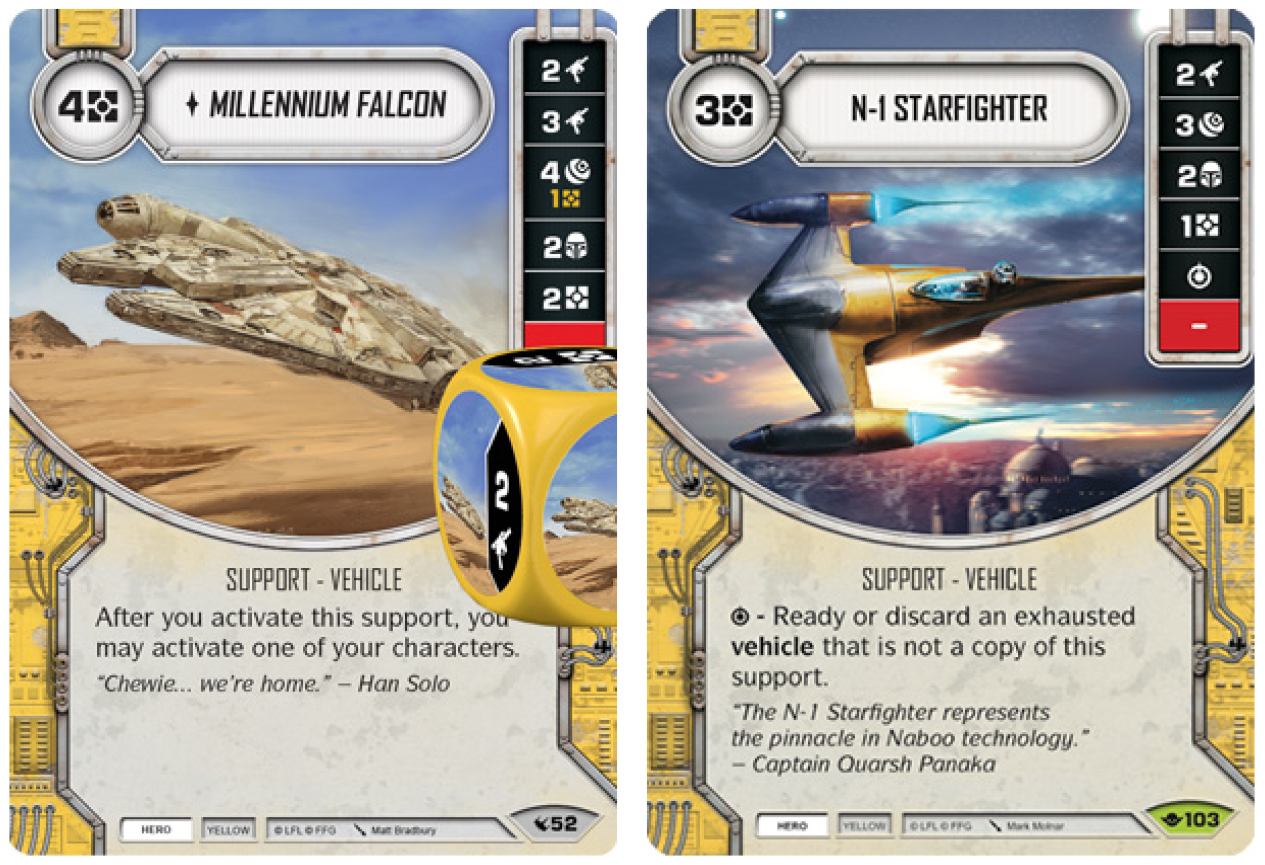 MILLENIUM FALCON
Three versions of it exist, each with different strengths, but definitely only one fits well with the idea of the deck: Speed. Millennium Falcon 2 is perfect with Lando as you can activate it after you played it and it has ambush. So, you activate the Falcon plus one of your character and still have an action left: amazing. The die feels really good for only 2 resources cost and has a 4 value side for these nasty explosions.

N-1 STARFIGHTER
This 3-cost support becomes a 1-cost with Lando’s PA (and the Weapon's Factory Alpha) and look at what it brings: 2 Ranged damages, 3 Indirect damages, 2 Shields, 1 Resource and a fantastic Special. Isn’t that the best 1 resource die you’ve ever seen? Furthermore, the Special is key in this meta with big vehicles everywhere. You can play and resolve it in the same turn without being controlled if you have a Force Speed, that’s almost an instant win versus a bunch of decks. Finally if your opponent is not playing vehicles then you can ready one of yours for a bigger die in the pool. 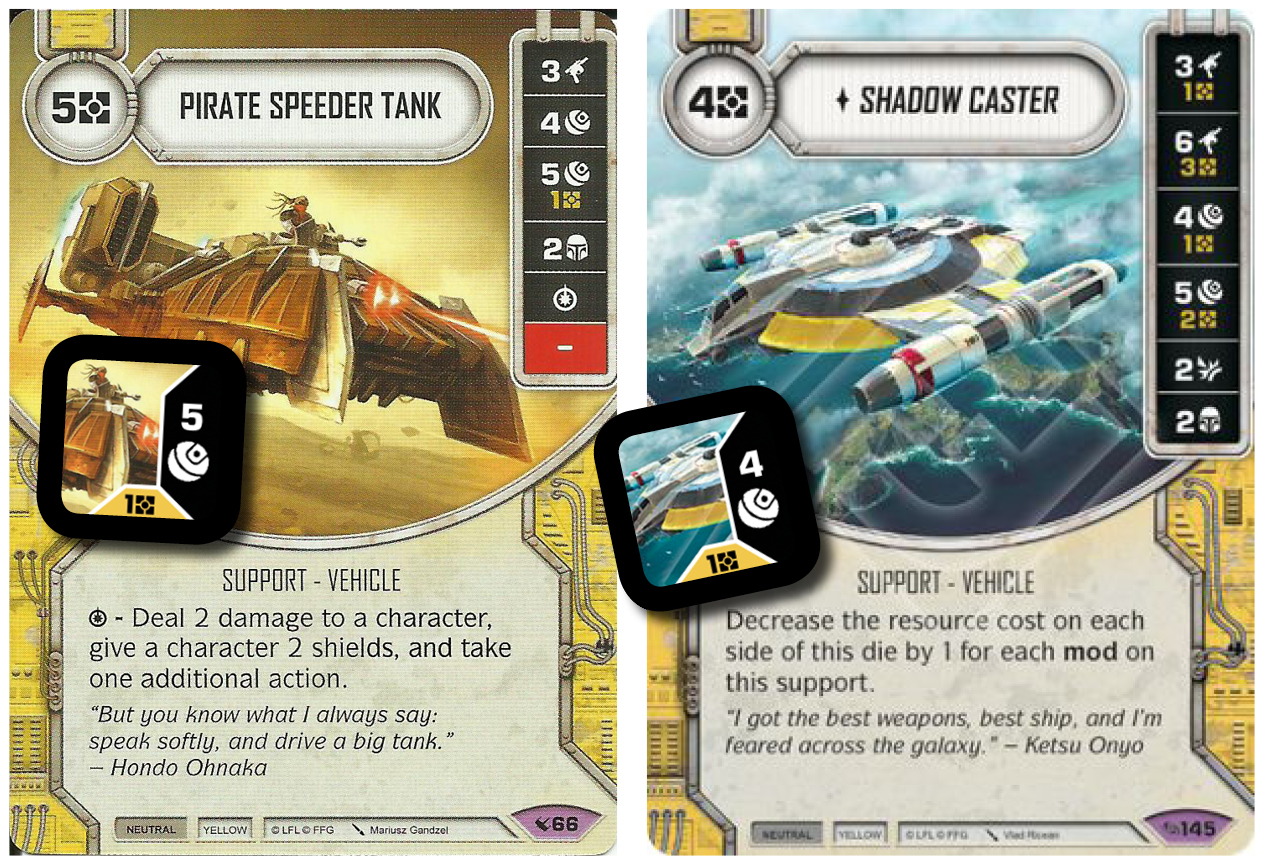 PIRATE SPEEDER TANK
This one was included and removed several times to finally come through big time. The only problem with it is that you are not sure to play it round 1, but generally you can manage to do it. The die sides are amazing for explosions and the Special can bring crazy plays to the table with the action cheat.

SHADOW CASTER
This is the vehicle of the moment. It has crazy sides for big damage and no blank. I’m not playing any mods so every side has to be paid for, but thanks to Planned Explosion none of them really is and in case you roll a lot of money then you could still resolve it.
6. EVENTS:The deck is a little low on pure removal cards, but as mentioned previously the DL-44 Heavy Blaster Pistol still offers you some die control (and you run Force Illusion).

BEGUILE is a great 2cost removal and without any spot requirements you can still play it once Yoda is dead.

EASY PICKINGS
Everyone knows and hates this card. Removing 2 dice for 1 resource can be a game breaker.

ENTANGLE is a good 2 dice removal in only 1 action and 1 card. The only issue is the spot condition which is why I run only one copy.

OVERCONFIDENCE
One of the best blue removal for 1 resource and if you are a little greedy you can Overconfidence battle with your Lando die (or use the Shadow Caster die). I run only one because of the spot condition as well. 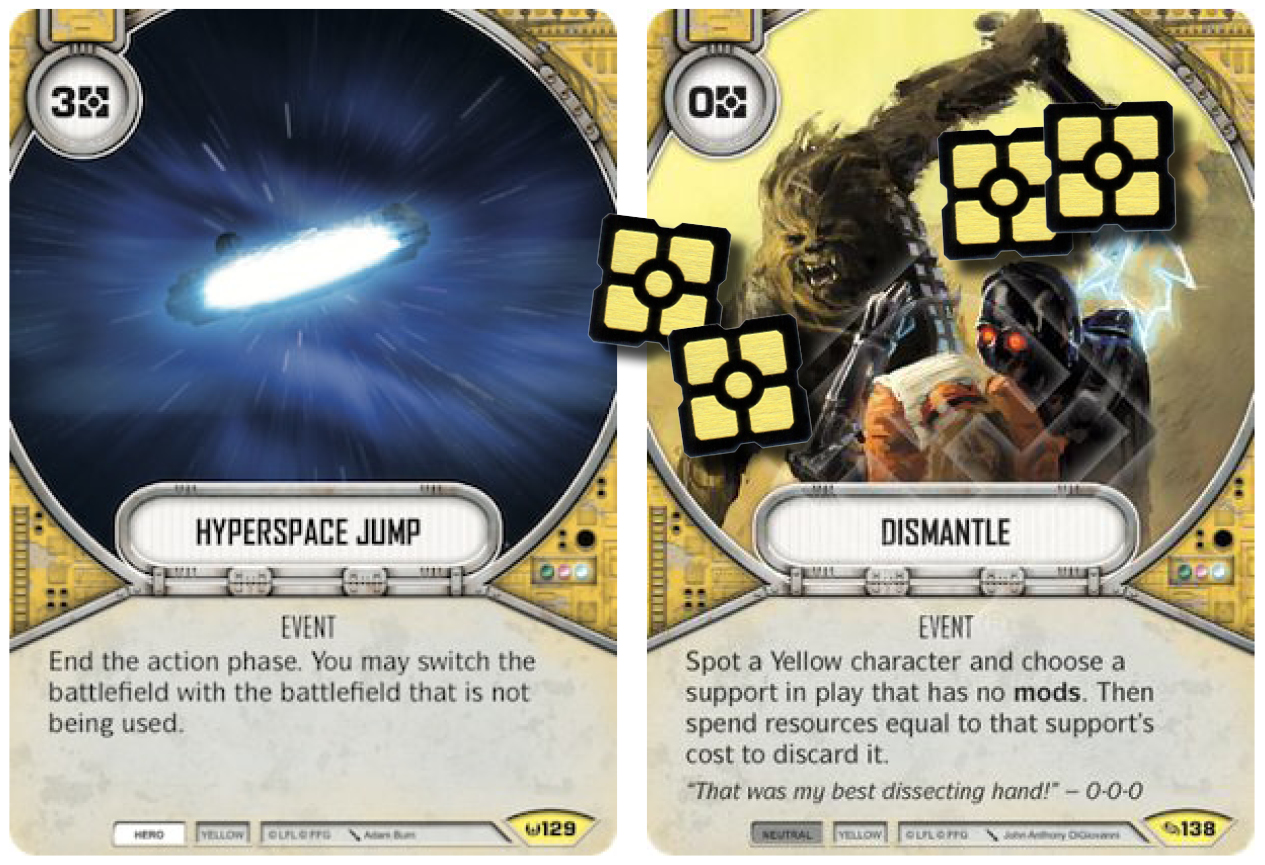 HYPERSPACE JUMP
Time walking is a great way to remove your opponent’s dice. With Yoda resource generation and all the speed you can get in this deck, you can setup some devastating jumps or gain a little more time to set up your winning combo.

DISMANTLE
One of the last card I added in the list just before the Regional I went to was Dismantle. I was afraid of Vader’s Fist and N-1 Starfighter could not get rid of it. After I tested out Dismantle I realized that it should be include in every deck with high money generation. It was game winning in 3 of my games.
7. SPEED, TRICKS & GAME PLAN:As you will probably have realised by now, this is a combo-deck. One thing you need to reconcile yourself with is the fact that sometimes you will annihilate you opponent round one, while at other times you won’t do anything else than gain resources, have nothing else to play and just get on with it. So game pace management is key, you need to think several turns ahead and be able to know when you will be able to stage your comeback.

This deck is great at playing from behind due to Planned Explosion and to facilitate those comebacks I opted for PARTNERSHIP. Partnership is crazy good in conjunction with the Millennium Falcon as it allows you to activate both your characters and your support. Then if you have any Force Speed Specials showing or if you have an IMPULSIVE in hand, you can run completely riot and steal a win in any game!

Your gameplan is as important in Destiny as resource management is (don’t forget that Lando’s die has a 2-cost side). In this deck you have to be the best at both, but if you succeed then you will be reward with one of the best decks I've ever tested! Play every card you draw, think ahead and do your tricks, your opponents will hate you for sure!
8. MULLIGAN STRATEGY:

Force speed OR Friends In Low Places + Planned Explosion + N1-Starfighter + Millenium Falcon + a control of your choice (preferably a 1cost).

Always keep Friends in Low Places and Planned Explosion as it is your main combo and if you manage to play it turn one it is almost win.

You will need one more die in the pool to be able to play those explosions so try to get a vehicle or a DL-44 Heavy Blaster Pistol round 1. Usually you don’t want to play the Millenium Falcon in round 1, but if you got it in your first hand then keep it, the action cheat effect is too strong to reduce your chance to draw it later.

For the removal just adapt to your opponent’s deck: Easy Pickings against characters with multiples of the same sides, Beguile against Vader, etc.

Mulligan is complex for every deck, but I'd advice you to NOT keep the following in your opening hand: Second Chance / Force Illusion / Hyperspace Jump / Partnership / Impulsive.

PATREON SUPPORT:As a Patron you support the YOUR Destiny website, podcast and YouTube Channel, and you help us to continue providing content for Star Wars Destiny. We are a dedicated Destiny website and release articles almost daily. As Patron you also get access to all of our Chat 'N' Play videos, participate in draws for official cards and merchandise, and can enter our Patron only Discord Channel. Advanced and Expert tier patrons get access to exclusive training and test videos. Thank you for your consideration!