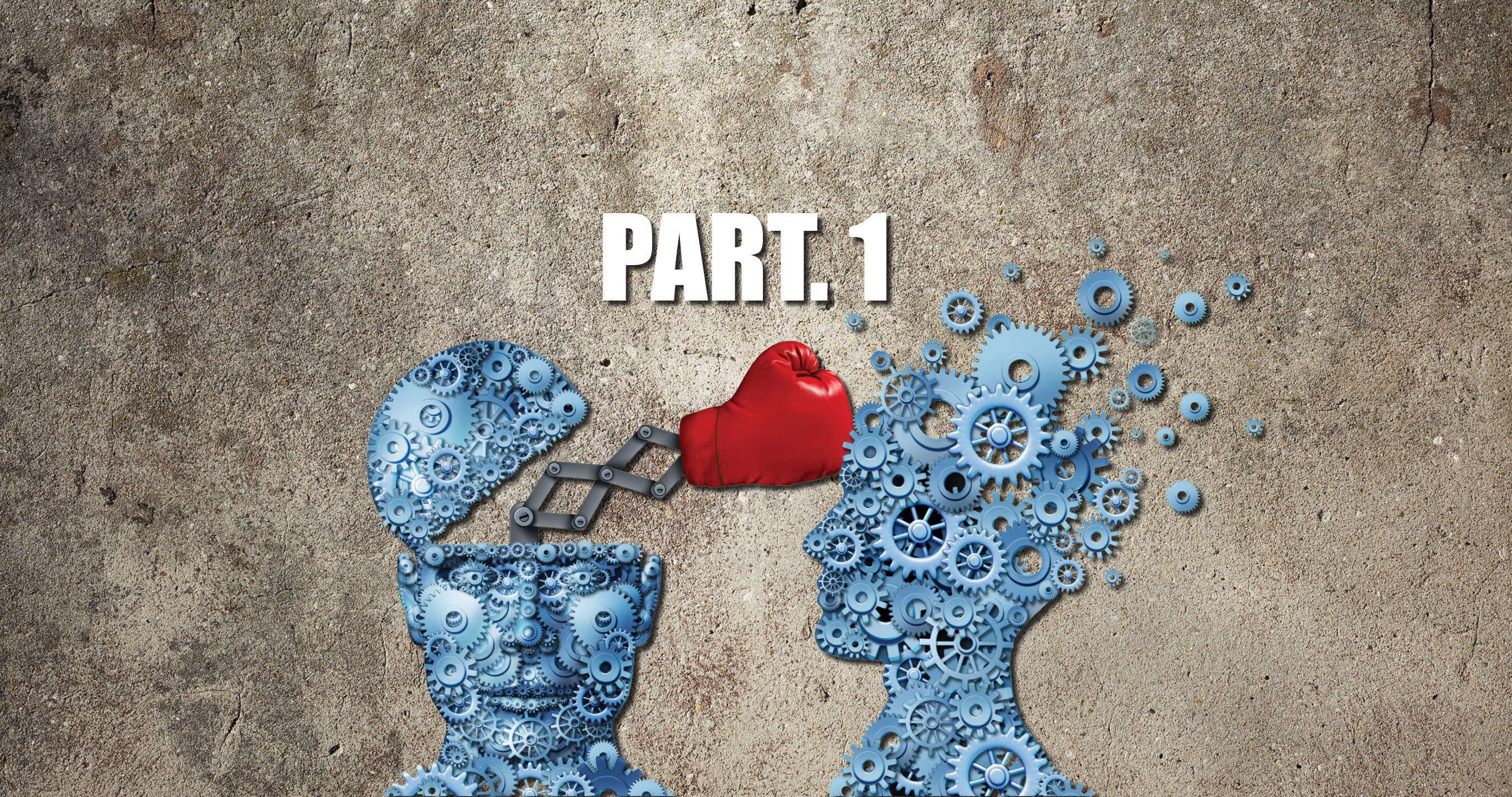 There will invariably be many definitions on "what a competitive gamer is", just like there will be many opinions on whether or not "one should first and foremost be a competitive gamer". In the context of this article I define a competitive player as "someone who is playing each game of Star Wars Destiny trying to maximize their own influence on the game in order to win".

As an addendum it should be noted that although I do not find the game inherently balanced, neither between characters (in terms of innate power level comparative to cost), factions or even colours, I will not be engaging in that design discussion in this article!
ALL THE VARIABLES:One of the hardest things as a competitive Star Wars Destiny player is to get accustomed to the variable aspect(s) involved in the game. Obviously, there are a lot of variables, but the two most dominant ones, and usually the ones that are the scapegoats for our losses and the opponent's "unfair" wins, are:

We've scratched the surface of the aspect of card draws in a previous article on mulligan strategies, and while that's definitely worth analyzing further, the focus of this article is really an extension of both aspects, and it does not deal with one or the other in detail, but is an attempt to go beyond them, by examining the state of mind or the attitude of the competitive Star Wars Destiny player.
"SABINE DOING SABINE THINGS":I've heard this expression numerous times. Commentators are using it in streams or recordings of games. Players are using it. Let's just cut to the chase: The expression is used as a derogatory term describing how a player (your opponent) without any kind of skill defeated an opponent's character. That expression in itself has become a catch phrase for players who don't understand how their excellent character team, superior game plan and perfect execution of it, was defeated by an inferior opponent and his incredible luck.

In game terms "Sabine doing Sabine things" can be translated as follows:
The player controlling Sabine activates that character, uses the before activation trigger to play a weapon upgrade from the discard pile on Sabine and rolls all the character and upgrade dice into the pool. IF the upgrade has the Ambush keyword, that player is allowed to take one additional action after playing the card.

Normally this is translated into the following by players: "So Sabine hit me for 7 Ranged damage and of course Ezra's dice were showing +2 Ranged damage, so he killed my Rose round 1, and that was sort of game. I mean, I tried to fight my way back into the game, but he just kept doing Sabine things".

There are other examples like the one above, but the Sabine argument is the most prevalent and the one that is used the most. That is why we will use it here as our case example. 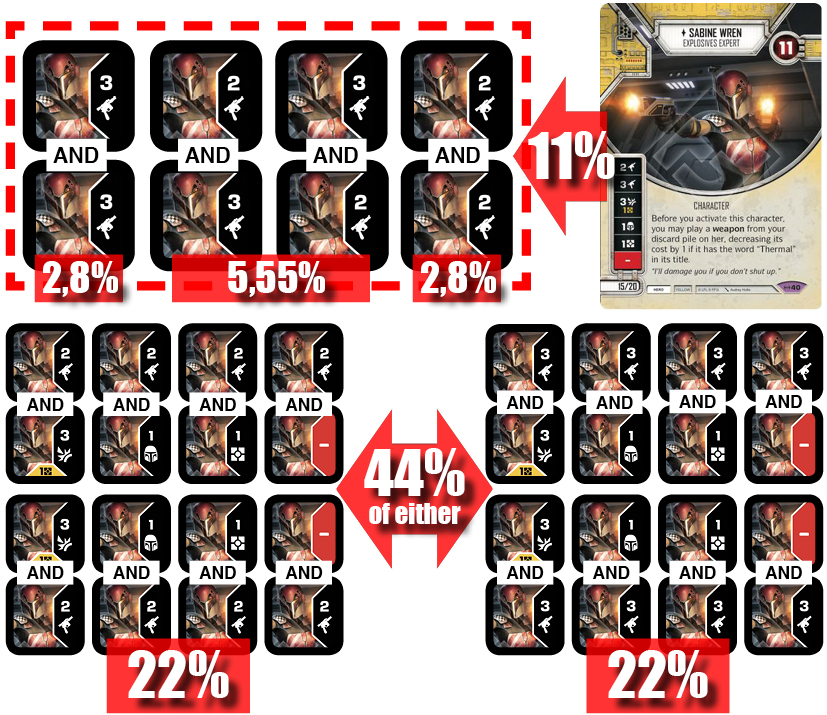 Breaking up the numbers further, you are looking at the following odds for Sabine Wren dealing:

Remember that we are looking at a Sabine without any upgrades on her, and the examples are merely here to underscore the following points: It's totally randomized whether or not you are dealt 6 damage or 4 damage (or any other double result). And one result, i.e. 6 damage, is not more lucky or unlucky (depending on which side of the table you are sitting) than the other result, i.e. 4 damage, and statistically there is 2/6 = 33,33% chance of hitting EITHER 4 or 6 damage compared to any other double symbol result! None of the players have any control of this. If you are banking on receiving NO DAMAGE (0 damage), the odds are against you (55,55% for Sabine to hit at LEAST 2 damage).

Let's see how it looks if we add a Hidden Blaster played from the Discard pile as part of Sabine Wren's before activation trigger: 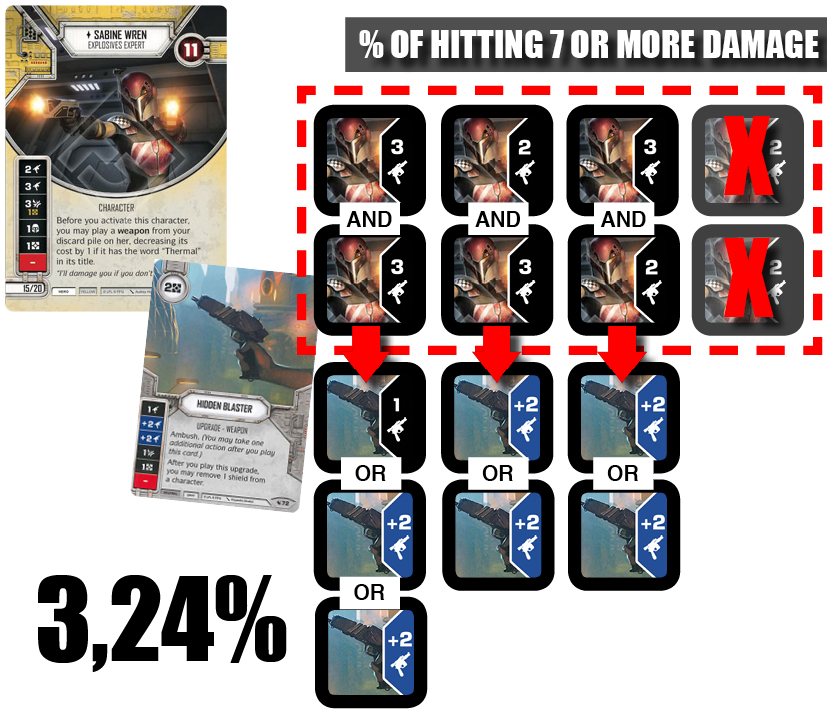 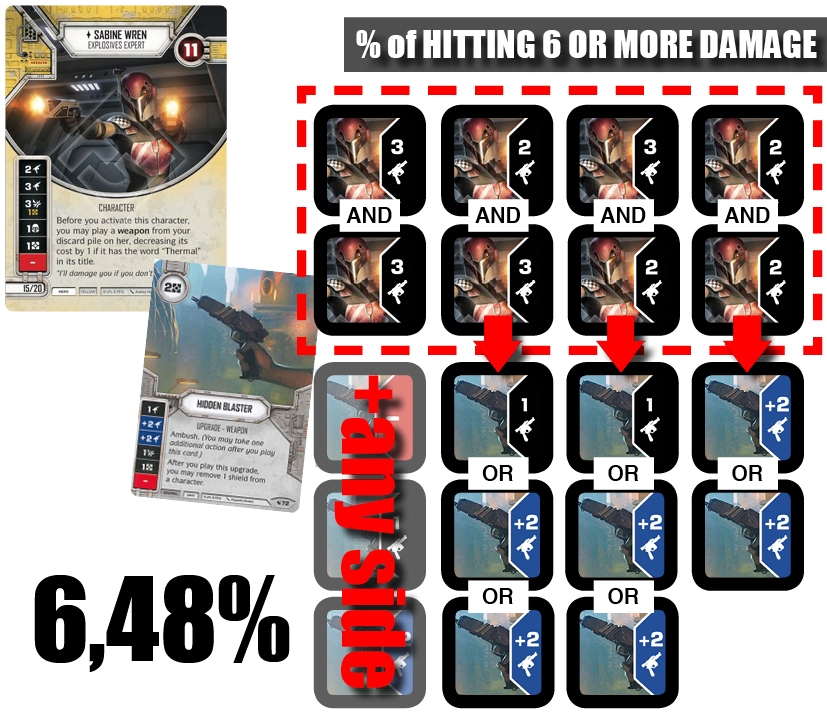 And then there's of course the illusive 8 damage. Maximum damage output that cannot be mitigated because of the Ambush keyword on the Hidden Blaster.
8 Damage: 0,93% (2/216)

It is in other words highly unlikely that you will get hammered for 8 damage, whereas the 6 damage might be unlikely, but don't roll your eyes if it does happen. This is all math though, and it's not really what this article is about. On top of that - this is rarely what happens (translated: 99,07% of the times you encounter Sabine Wren, you'll not be taking 8 damage to your face in the first Sabine activation). Yet it seems as if it happens much more often because you know "Sabine does Sabine things"?!

My contention is that there are a number of choices made in a significant amount of games, and not just against Sabine, that very often puts a player in a position where it seems as if the unlikely happens way too often.

Now, imagine the above example again (Sabine Wren is activating and uses the before activation trigger to play a Hidden Blaster from the Discard Pile), but this time there's already an Ezra die on +2 Ranged damage sitting in the pool. That dramatically changes the odds of Sabine Wren hitting 7 damage. 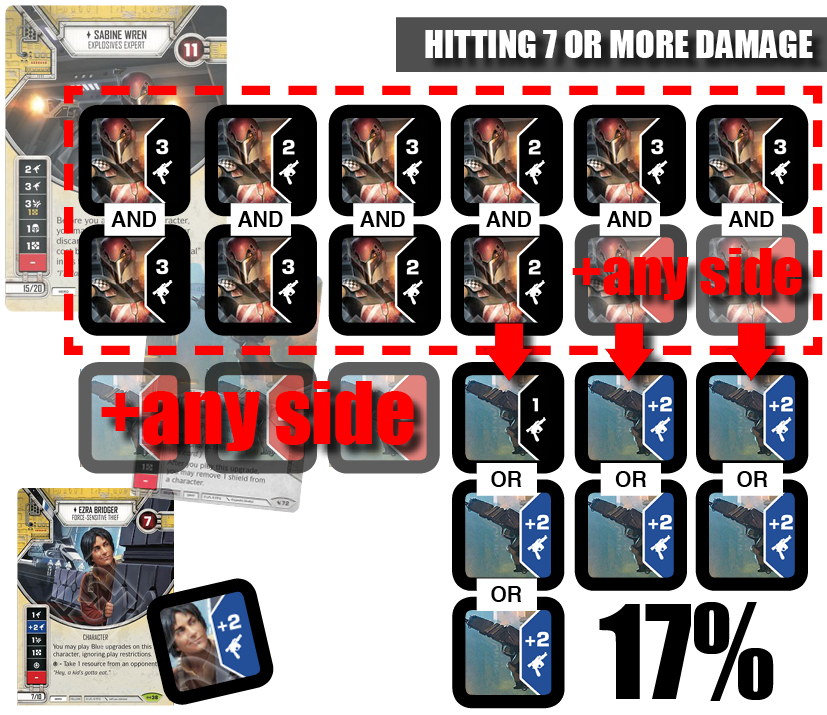 The odds in the above example is now at a whopping:

17% (37/216)
That is an extreme swing from 3,24%, but that swing came from the fact that the opposing player (maybe you) didn't remove the die from the pool! Ezra's dice had been sitting there for at least a turn, most likely two if your opponent was discarding to re-roll to get the Hidden Blaster from his hand into his Discard pile! You had 2 turns to make the odds drop from a doable 17% to a highly unlikely 3,24%, maybe in the process preventing lethal damage to one of your characters?
MAKE THE VARIABLES WORK TO YOUR ADVANTAGE:Have a look at the following situation. You have 2 Rey dice in the pool, and your opponent has 2 Ezra dice in the pool. It's your turn. You have an Overconfidence in your hand (and it's your only mitigation card), while your opponent has a Hidden Blaster in the Discard pile. Do you activate Aayla to try and get something out of her dice? Do you play your Overconfidence? If, yes, which dice are you overconfidencing? 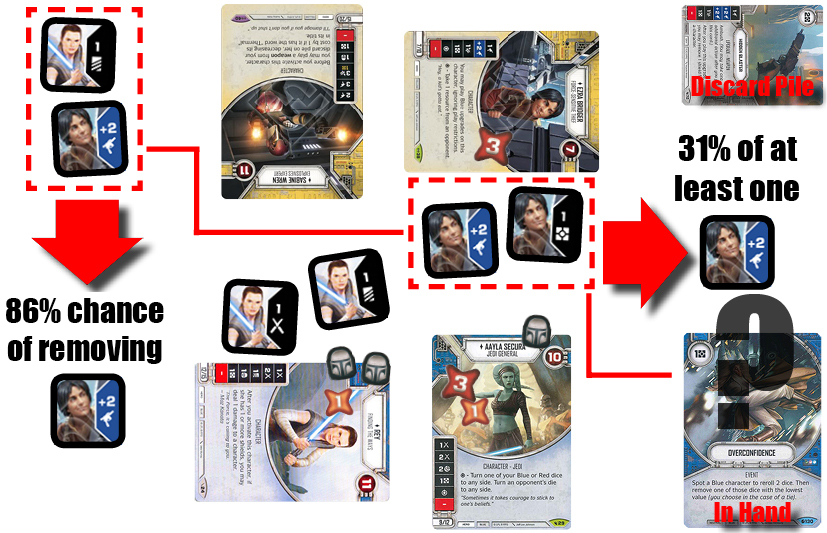 If you Overconfidence the two Ezra dice, there's a 30,56% chance of one of the two hitting another +2 Ranged damage, which means it is guaranteed to stay in the pool, but if you Overconfidence one Rey die (i.e. the Disrupt) and an Ezra die (the +2 Ranged Damage), you'll remove the Ezra die in 86% of the roll-offs.

As you can see, the damage output from Sabine starts much earlier in a round than merely looking at that isolated moment when Sabine activates and (maybe) deals damage.

Both you and your opponent made a number of choices prior to that.
Your opponent activated Ezra, knowing that:
You might say that all of this is self evident, and anyone playing Sabine/Ezra should know this, but playing the devil's advocate, isn't that then the sign of your opponent entering the game with the right attitude? Playing his deck to the highest skill cap and thereby improving his chances of winning the match-up? If your opponent has done everything right, reducing the misplays, improving the odds for the best possible out comes, but you failed to read his plays properly and act accordingly, who has proven to be the better player at the end of the day, regardless of what decks were piloted respectively?

Are you playing against Kylo/Anakin and is Kylo continuously hitting with his special ability? Are you optimizing your hand or are you making it too easy for Kylo to guess the composition of it? In this situation where you are playing Sabine/Ezra. You don't have any resources and it is your turn, what would the right play be? 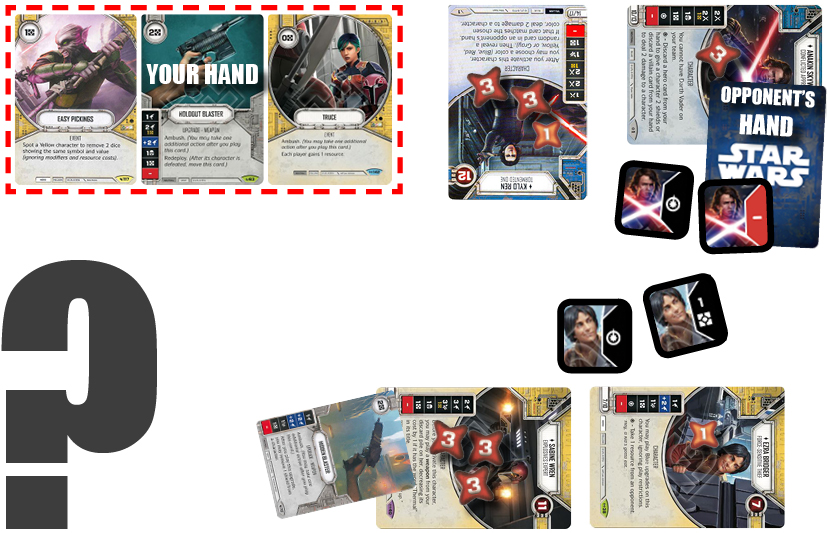 The strongest play (in my opinion) is given below ... take a bit of time to think about it before scrolling down! 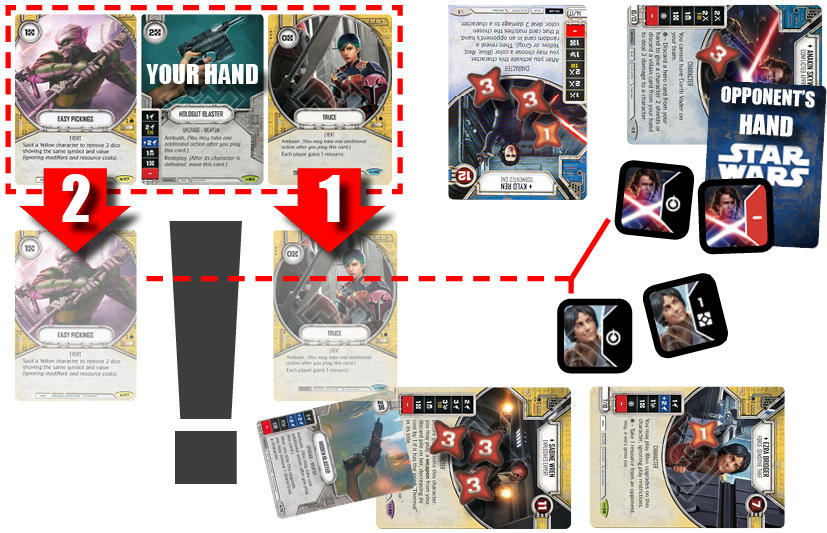 The right play in this situation would probably be to empty your hand of Yellow cards: Even though this play would mean removing one of your own dice in the process, it would ensure that you:
A monoyellow deck is obviously going to have a hard time against Kylo/Anakin, but on the other hand, there are so many things you can proactively do to improve your position against it. If your opponent ends up killing sabine, then it's not just "Kylo doing Kylo stuff!", but because he has 58,33% (21/36) chance of rolling two or more Melee damage. But you managed to reduce the risk of Sabine dying quite significantly from an almost certain kill (the activation trigger + the card in your opponent's hand) to "just" 58%.

Looking at what YOU can improve, where your potential blind spots are, is also changing your mentality. Rather than blaming poor luck or bad draws for potential losses, look for the outs. See the possibilities. "The overconfidence battle" is a great way to begin. Get your sequencing right. Take a step back and ask yourself: "Did you make your deck (with all its limitations and variables in mind) perform optimally under the given conditions? Yes! Congratulations. If, no, how can you optimize it then?
KILL YOUR DARLINGS:

Are you maximizing and playing to the strengths of your deck? Yes! Then maybe it's your deck you need to take a look at? If you are not drawing into mitigation, maybe you've added too little (we are talking a bit about basic deck building tips in the YOUR Destiny Podcast Episode 6 as well as the YOUR Destiny Podcast Episode 16). Didn't you draw into the cards you needed? Maybe your mulligan strategy was wrong (we deal with mulligan strategies in this article). Once you are clarified with all of these things, then you need to reconcile yourself with the fact that the variables can at times be unfavorable, but Sabine NEVER EVER just does Sabine stuff. It is facilitated, planned an executed by players.

William Faulkner used the phrase "In writing, you must kill all your darlings" indicating that it might just be your own affinities that hold you back. You are so used to doing things in a particular way, and it has sort of worked out "ok" - most of the time - that you are reluctant to change it. And while it can sometimes be the right strategy to hold on to what you know the best, whether it's a deck or certain style of play (there are many great examples of that), at other times the right approach is simply to alter it and adapt.

Have someone from your testing group take a look at your deck or supervise when you play a couple of games. Go through the plays afterwards or even while you play. Don't get annoyed at the corrections of your plays, even when "you know you're right": KILL YOUR DARLINGS!

There's also the option of joining our Patreon, where you'll get immediate access to our Discord Channel, which is also the hangout for our testing group: The European Gauntlet. Patrons has priority seats at the training sessions run by Mads Utzon and Claus Staal.

[EDITOR'S NOTE: The article has been edited. The percentages mentioned in the "Overconfidence Battle" with Rey/Ezra dice were off. It originally said 89% percentage of removing an Ezra die, whereas it is in fact 86%. Thank you to our reader Jordan McClure for making us aware of this!).