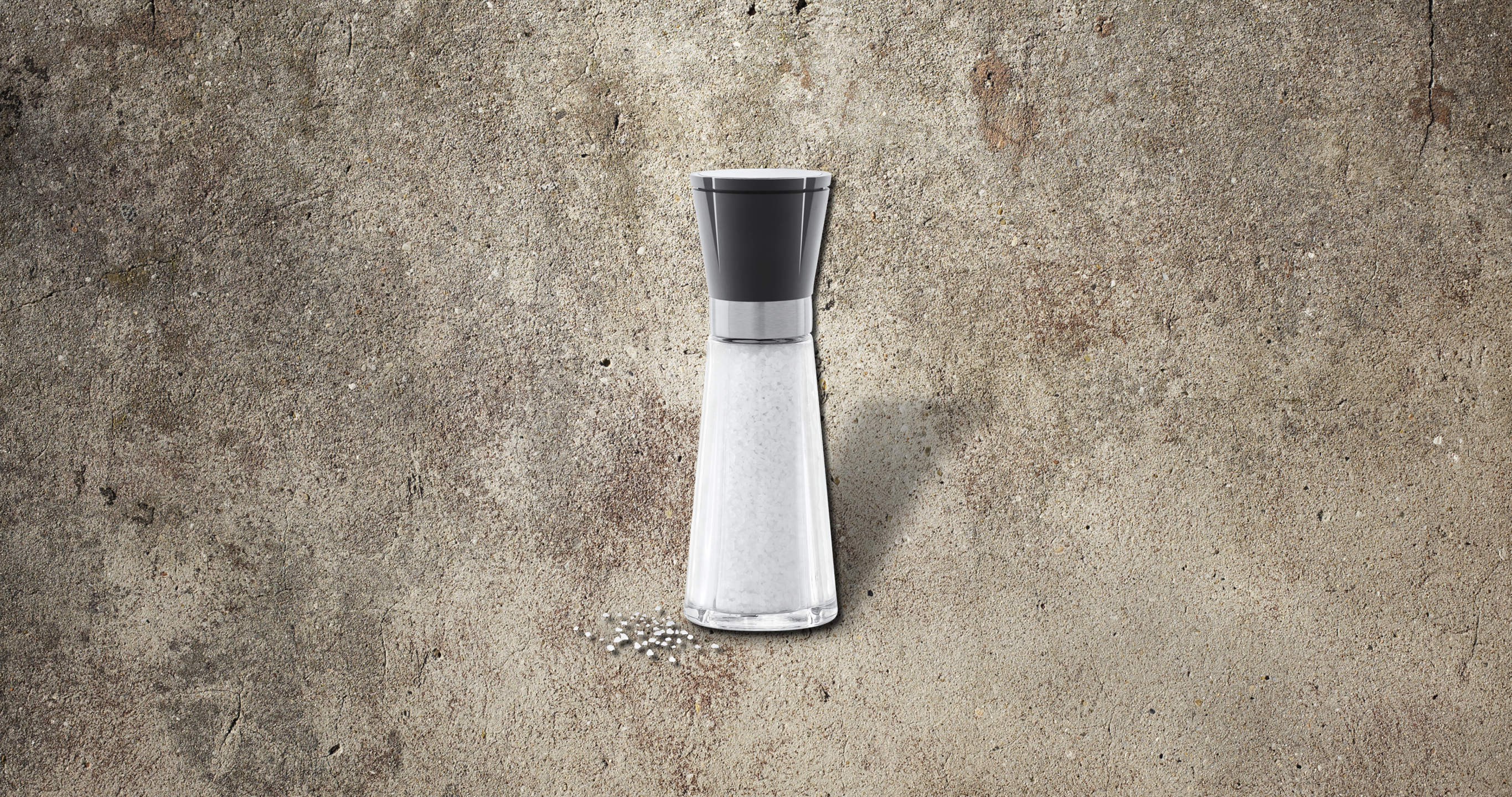 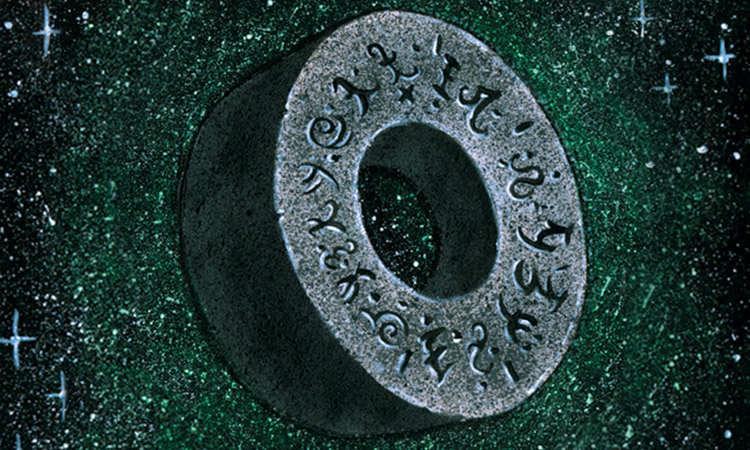 1. HOW TO APPROACH MILL DECKS IN DESTINY:To make sure everyone is on the same page, this article is NOT about how to play mill. It will very specifically be about how you, as a player, give yourself the best chances for defeating any given mill deck.
2. UNDERSTANDING THE MATCH UP:Just by the way the game is designed a mill deck faces some big challenges. If you play an aggressive damage based deck against an opponent playing a mill deck, you might start out "about even" (you having 20-something cards in deck and hand - I’m here assuming that you have to play out some of your 30 cards), your opponent having 20-something health points for me to chew through).  But as the game progresses the inherent weaknesses of mill decks starts showing.

When you are halfway through executing your game plan (deal 20-something damage), you will most likely have killed one of your opponents characters, leaving them with fewer dice and options going forward. When your opponent is halfway done milling your deck,  you will still be operating at full power. This is even more true for 3 wide mill.   Not only is the very game design itself rigged against mill decks. The tiebreakers that we use to determine the winner of games that could not finish within the time frame, is also inherently biased against mill (see the tournament regulations here). 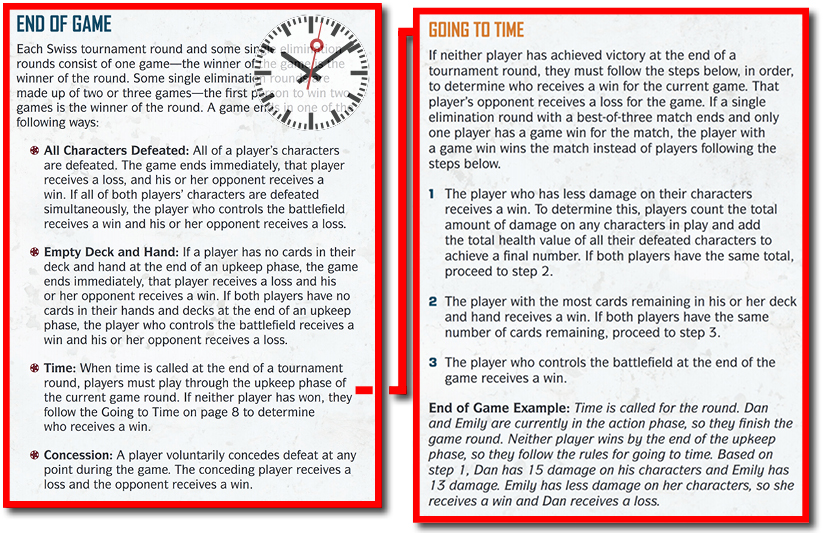 Yet, players have been playing mill for almost as long as the game has existed, and it have won everything from casual kitchen table games, to Regionals and recently the North American Championship at Gen Con 2018.

So what are the strengths of mill decks?  First off, mill is not trying to deal a specific amount of damage, instead it is trying to beat its opponents whole deck. This gives the mill player some very big advantages in a game of Destiny.  Every card you play against a mill deck is essentially furthering their game plan. Imagine playing against a damage based deck and every time you would play a card you had to deal yourself one indirect damage. You would be much more careful about playing that Flank, Tech Team or Holdout Blaster.
3. UNDERSTANDING THE DECK: There are a lot of different mill decks that all try to accomplish the same goal, but the way they play out and the cards they run to facilitate this goal varies from deck to deck. Knowing how your opponent is trying to accomplish his or her goal will give you a great advantage throughout a game.

If your opponent is trying to set up big Buy Outs, Strength Through Weakness or get out of trouble using Hyperspace Jumps, maybe some timely Discard or Disrupt might be very valuable.

If your opponent is trying to mill you by attacking your hand thereby limiting your options, maybe you could afford to discard to re-roll aggressively in order to maximize your dice since you are losing your hand eventually anyway.

If your opponent is attacking your deck while mitigating your dice, maybe you mulligan harder for cards that will allow you to action-cheat your damage through, negating your opponents defensive measures.

The best mill decks are of course not as black and white as I state, and they might functionally be a combination of all of the above. That means you have to be as fluid as possible in how you approach the match up as they are in executing their game plan. Some rounds you will have to discard to re-roll aggressively to maximize dice results, some rounds consider resolving sub optimal dice very early in the round to secure some value, against a fast Hyperspace Jump and in other rounds, activate your support characters first to try and hit Disrupts or Discards to help protect your better dice later in the round.

When it comes to understanding the different mill decks, there really is no friend like experience, but studying deck lists and theory crafting is a good substitute and will help you make much more informed decisions throughout your games against mill (we are currently releasing a number of TTS training videos for our patrons, where we look at how to defeat mill decks. Join us on Patreon to get full access to them!)
4. MILL STOCK LISTS:The following are stock lists exemplifying the various types of mill decks, and although they naturally differ a lot, functionally they gravitate around the same core of cards and mechanics. You should definitely know how to combat and approach each of these decks!

This first list by Big_Campy, which took down a Store Championship, is a good example of a mill deck that will mercilessly attack your deck: 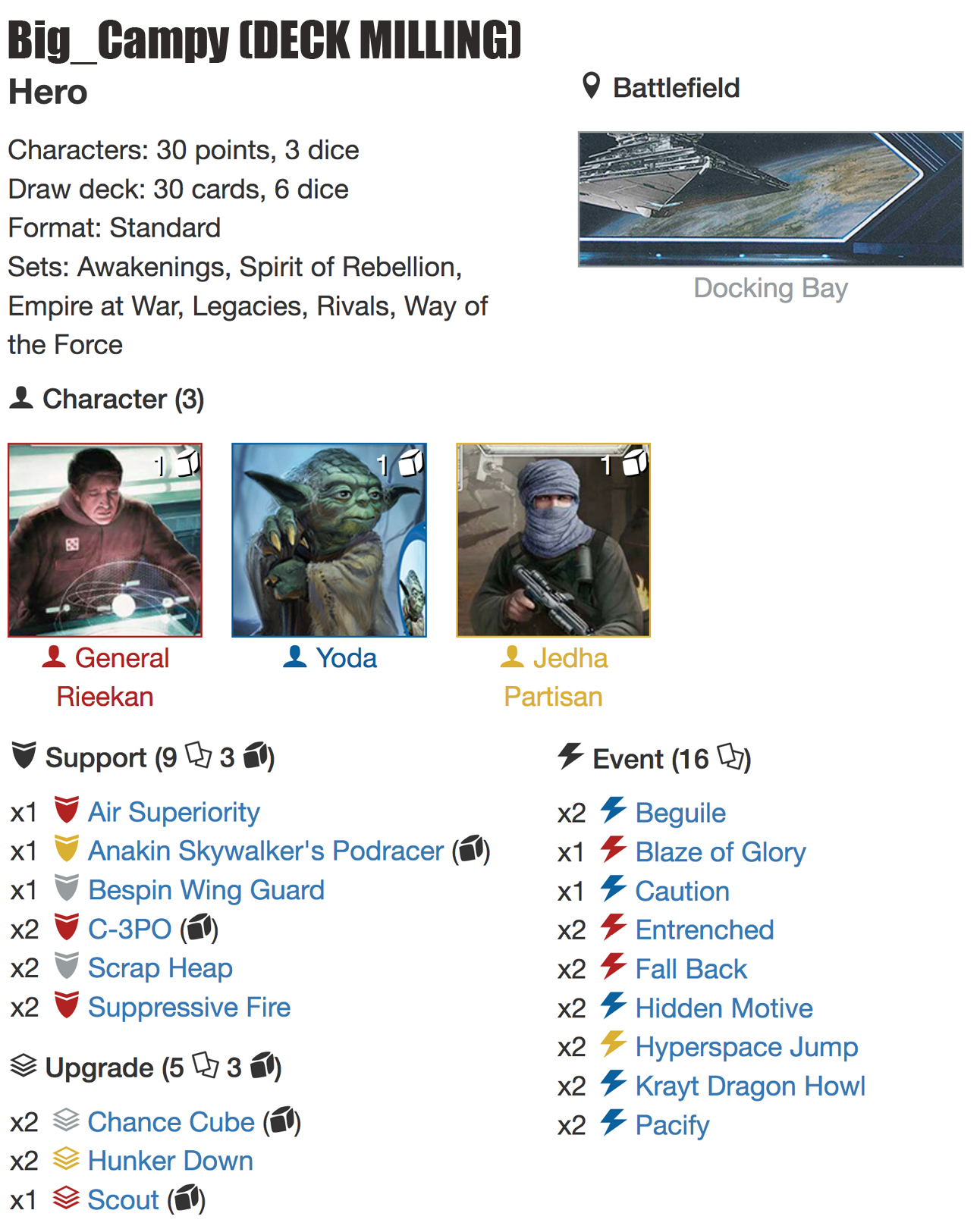 While this list by JimmyD is a prime example of a list that aggressively tries to annihilate an opponents hand aiming for the mill sides of Leia and Yoda in conjunction with Commando Raid, and at the same time maintaining pressure on the deck. 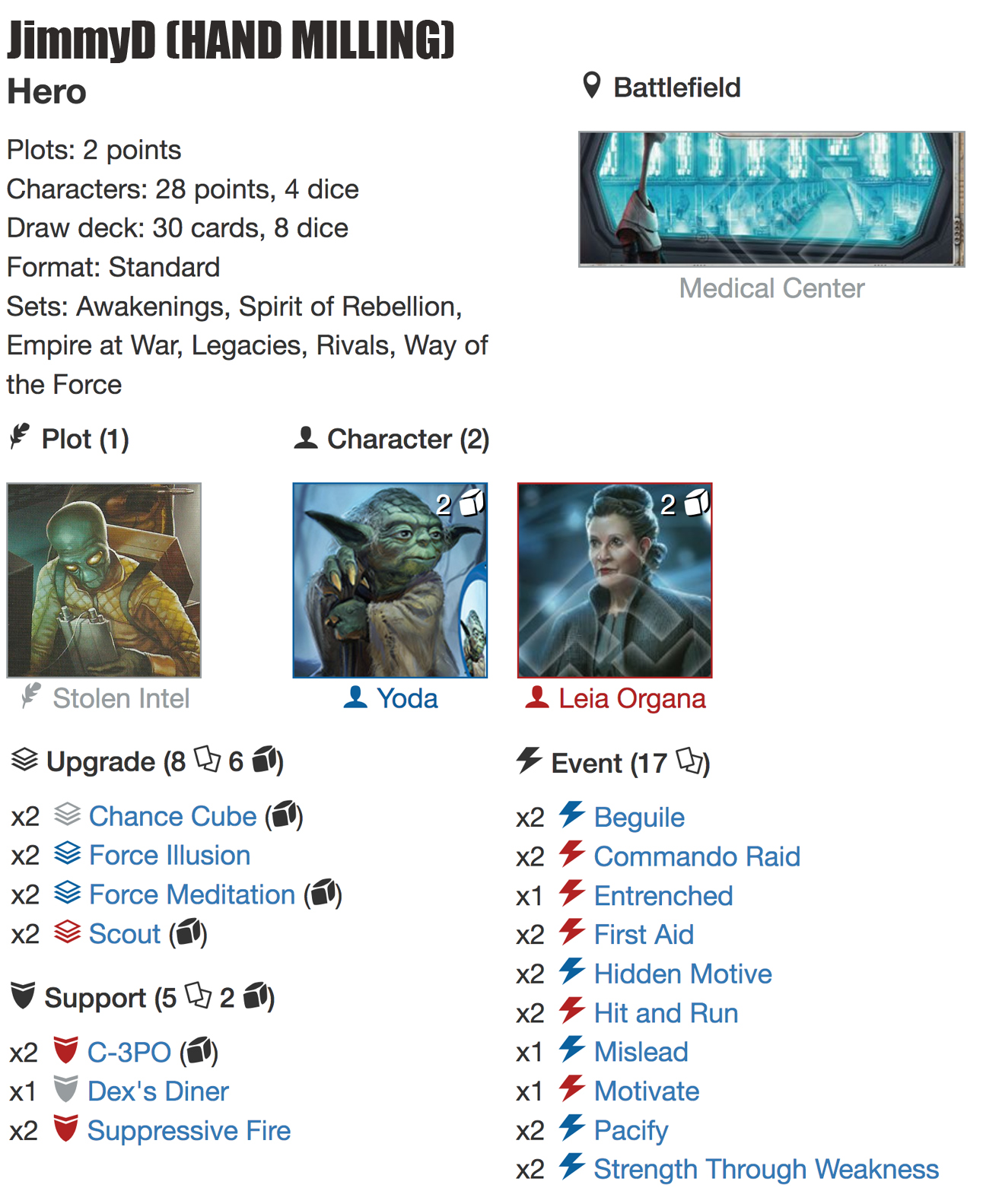 And finally the list that Andrew Cox used to devastating effect conquering the North American Championship at Gen Con 2018, which is indeed a list with very few inherent weaknesses and several strands to utilize in order to push through wins. 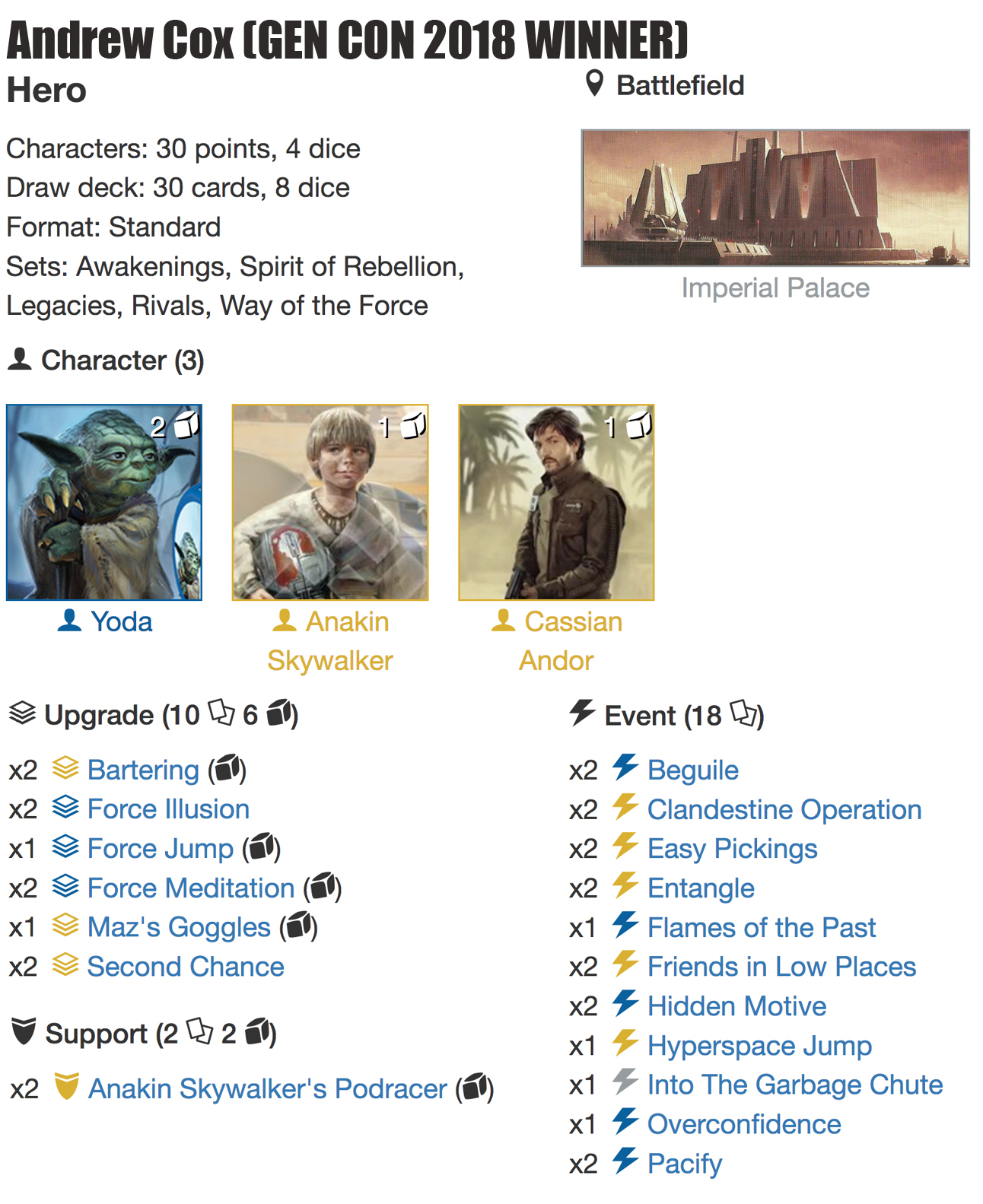 Interestingly, all the stock lists are hero lists and all of them are based on Yoda - Wizened Master. Coincidental? Well ...
5. UNDERSTANDING THE GAME PLAN OF MILL: Upgrades and supports are very good early on since they will progress your game plan. Do keep in mind that games against mill tend to last more rounds than games against aggro decks. This means that playing certain types of cards (cards that specifically advance your game plan) is correct for a larger portion of the game. Also, keep in mind that since playing cards like upgrades and supports is correct for a larger portion of the game, playing out events is more often incorrect. You need to make your mill opponent work for it, and if you play out every card in your deck, you will have done the job for them.

Discard to re-roll against a mill deck is a calculated risk. I’ve often heard players say things like “I NEVER discard to re-roll against mill decks”. This sort of mindset is dangerous. They are often right though, because IT IS OFTEN INCORRECT to discard to re-roll, but OFTEN does not mean ALWAYS, and amongst many other things, these two very big factors come into play:
Of course the above factors should be read as guidelines and not rules, there are A LOT more factors that should go into your decision-making.
6. CLOSING THOUGHTS:Rounding off I will share some pointers from my experience playing against mill decks:

Games last more rounds, which means that any early setup of your board state is often paid back aplenty.

Mill decks are hungry for resources, and Disrupt is often your best side against them, do not re-roll these without careful consideration. Disrupt one is often worth so much more than a point or two of damage.

Rarely play any events. Some events like The Best Defense on Yoda dice are of course amazing, so is a timely No Mercy for a character kill. But, not spending cards, resources and actions on events is often how you attack mill. Be proactive and force them into the defensive role.

Drawing cards against mill is often correct. More than once I’ve seen people declining to draw a card off their mill opponent's well-connected. This is often wrong. For most games it doesn’t change whether the cards is in hand or deck(if you draw the card, that is just one card less you draw during the next upkeep) but having it in hand gives you more options. Of course this isn’t always true and sometimes drawing extra cards will turn on your opponents discard resolving in more cards lost total. But more often than not, drawing cards against mill is correct. This doesn’t mean that all card draw is correct and you should not be playing draw events like ’Don’t Get Cocky’ your self against mill decks, since that will net lose you are card. Just don’t be afraid to play out that promotion, draw from well-connected or bartering special. Cards in hand are for most situations better than in deck.

Real time is on your side. This does not mean that you are allowed to play deliberately slow, in fact, THAT IS CHEATING and should be enforced by a disqualification from the tournament. But it is a complicated game, and there is A LOT of math involved, do not let your opponent stress you into making sub optimal plays. As long as you play at a reasonable pace, you are allowed to do the math, and think about the various lines and outcomes. Take your time. The mill player knows time is on your side, so taking your time will not only help you find the correct play, but also force your opponent into making faster decisions themselves, maybe forcing them to make incorrect or sub optimal plays of their own.

Do know that you should be able to finish a game of Destiny within 35mins. In my hundreds and hundreds of games of Star Wars Destiny, I’ve never had a single game be decided on tie breakers. So play reasonable, don’t cheat by wasting time deliberately, but do TAKE YOUR TIME! 35mins is plenty and both players should strive for finishing the game within this time frame.

Try making your deck more consistent by adding more supports or upgrades to it.  If possible include solid upgrades that make you hard to mill out like Mandalorian Vambraces, Ancient Lightsaber or even a Chance Cube can sometimes buy you a whole extra round.

And as Claus have taught me! If possible you can negate some of the inherent strength of a card like Flames of the Past by playing more singletons.

Thank you for your time!