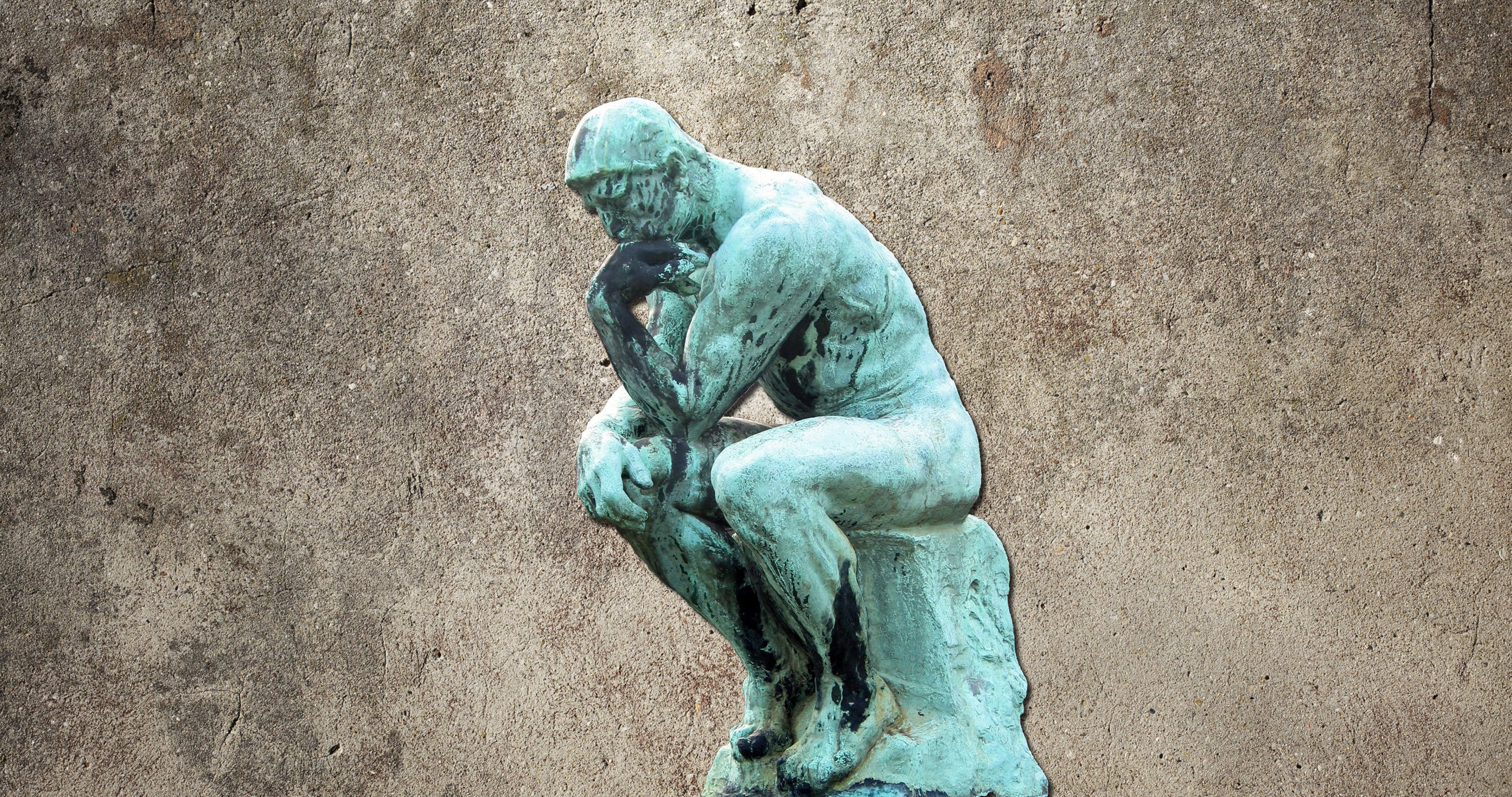 1. INTRODUCTION :With the release of the LEGACIES expansion set, Plots were introduced as a new element in Star Wars Destiny. By spending some of your 30 character points on a Plot card, you can benefit from building a cheaper team composition or 'fill up' the last pesky point missing, i.e. which was the case with ePalpatine.

At first, decks were not built around plots (maybe with the exception of Profitable Connections in eRey/eAayla, pre-nerf), but this will most definitely change with the release of Way of the Force (we talk about it in the YOUR Destiny Podcast Episode 18). With plots becoming an integral part of deck building, even becoming the trigger condition for various card effects, this article will not only provide you with an overview of the various plots, but a rating from our perspective and some ideas for your deck construction.

THE RATINGS:
0: You will rarely or never see this plot being played .
1: A decent choice, take it with you if you can .
2: A game changing plot which deserves a deck to be built around it  .
2. THE PLOTS: 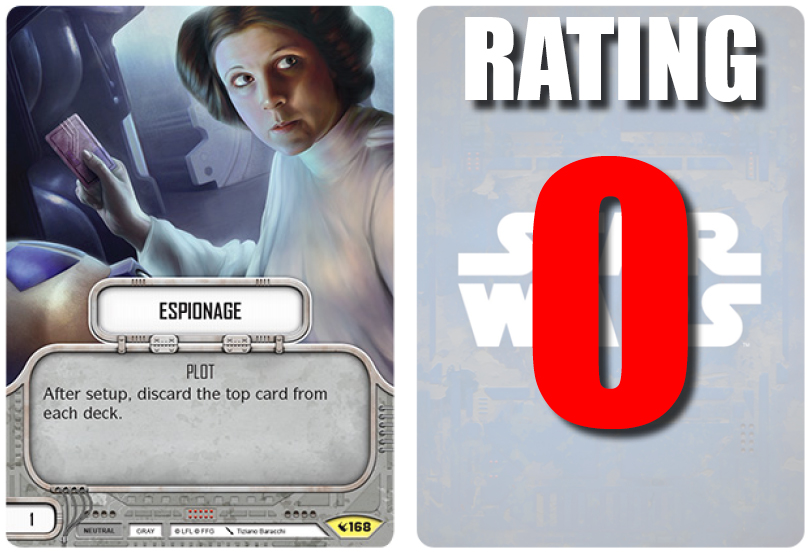 ESPIONAGE
"After setup, mill a card from both decks."
Cost: 1
Rating: 0
This plot will only be found in mill decks when that one point is left. But even for those decks it can be quite a gamble bringing to the table, because you could risk losing one of your key cards. 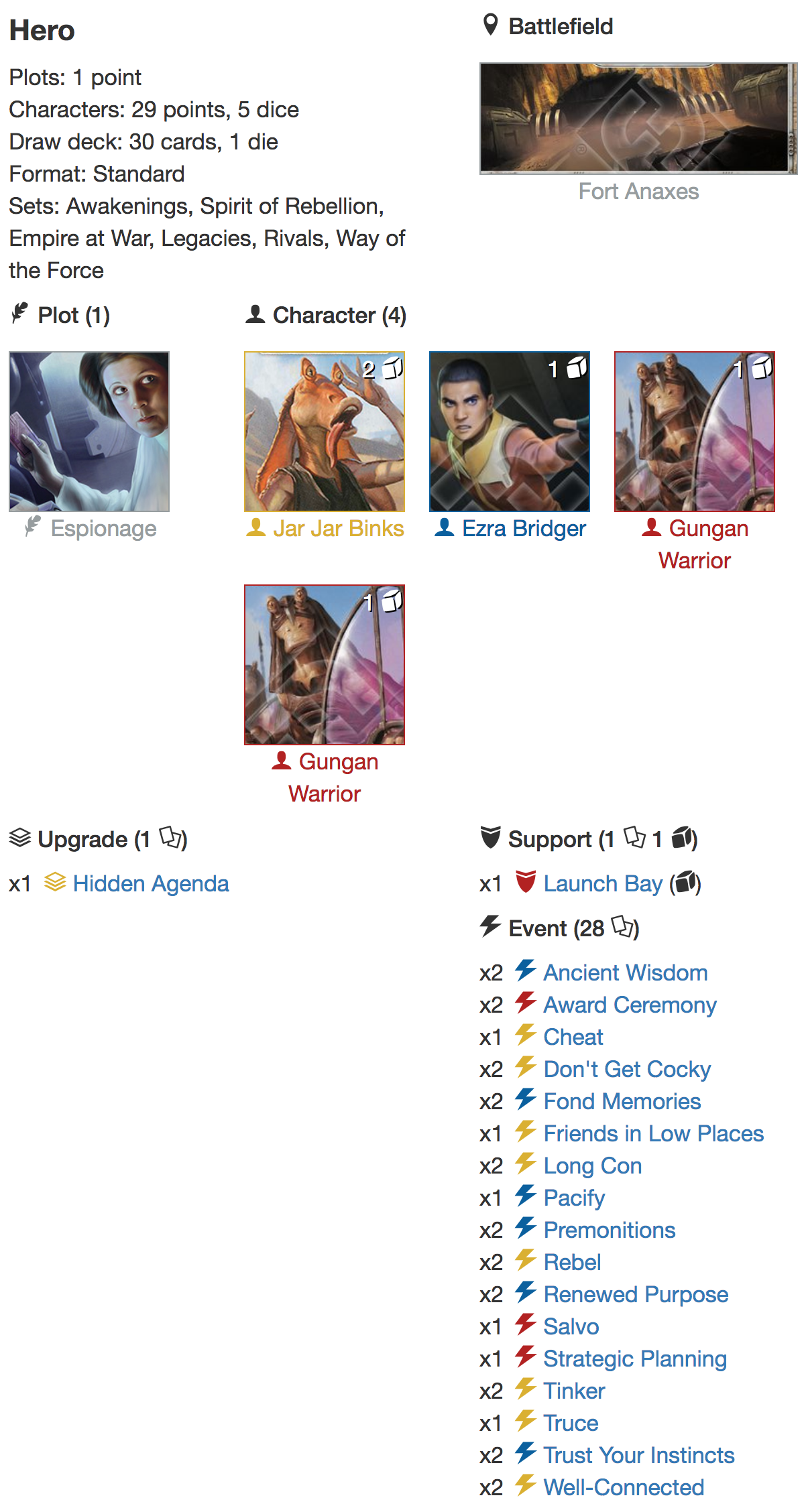 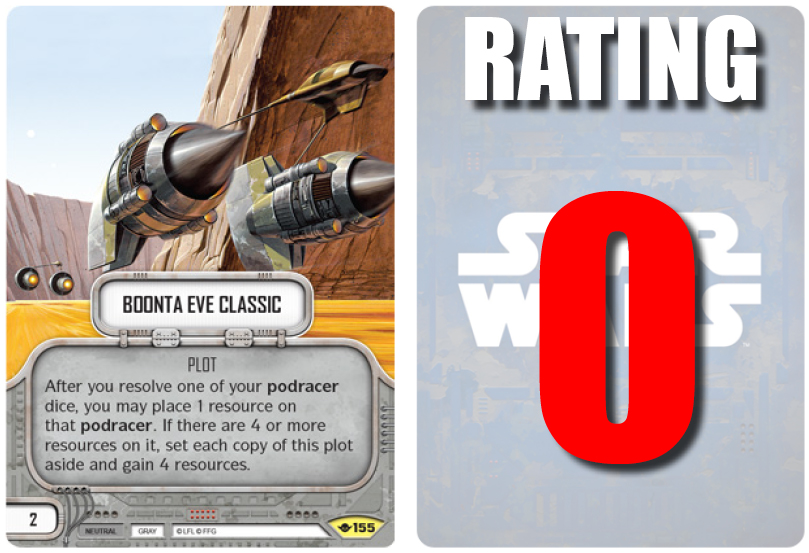 "After you resolve one of your podracer dice, you may place 1 resource on that podracer. If there are 4 or more resources on it, set each copy of this plot aside and gain 4 resources. "
Cost: 2
Rating: 0
Maybe this plot will find play in the future, but for now, there are simply not enough podracers out there to make it viable (currently just 3 different podracers and only 2 playable in a deck). Receiving 4 resources sounds great, but it is at the earliest ready in round 4 (you wouldn't waste your tactical planning on that), and only if you draw into an early podracer (Start Your Engines will help). Good thing is, that it is not limited to one podracer, so setting it up is not that easy to stop. 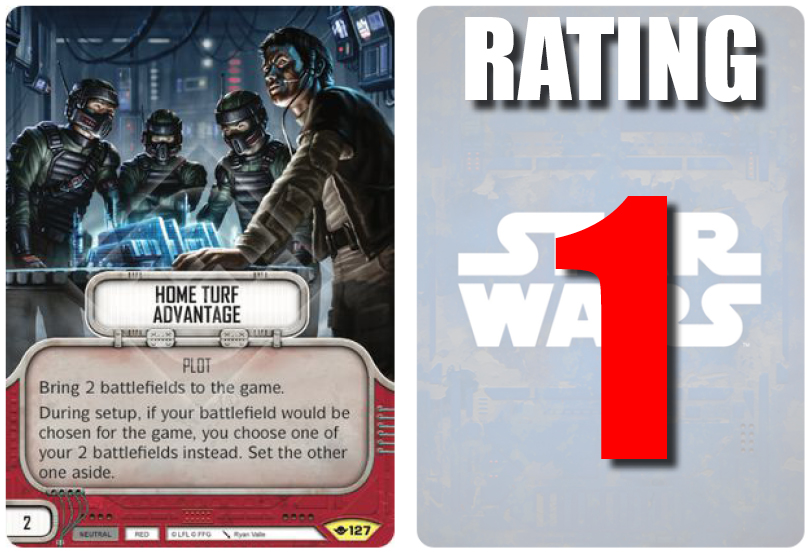 HOME TURF ADVANTAGE (red only)
"Bring 2 battlefields, choose 1 after your BF is chosen"
Cost: 2
Rating: 1
Now this is an interesting plot, with some real tactical depth to it, especially because you chose which one is used at the time your battlefield would be chosen. A skilled player can predict the speed of both decks and chose the one with the most benefit for him or least benefit for his opponent, if the enemy deck seems faster.

If you use this plot, I would recommend to bring two very different battlefields and try to adapt to or disrupt the game plan of your opponent. With Home Turf Advantage cards like New Orders could become interesting again. Furthermore, I think this plot gives you the possibility to bring super strong battlefields like Bendu's Lair or Emperor's Throne Room to your game without risking, that you are made to suffer from your choice. 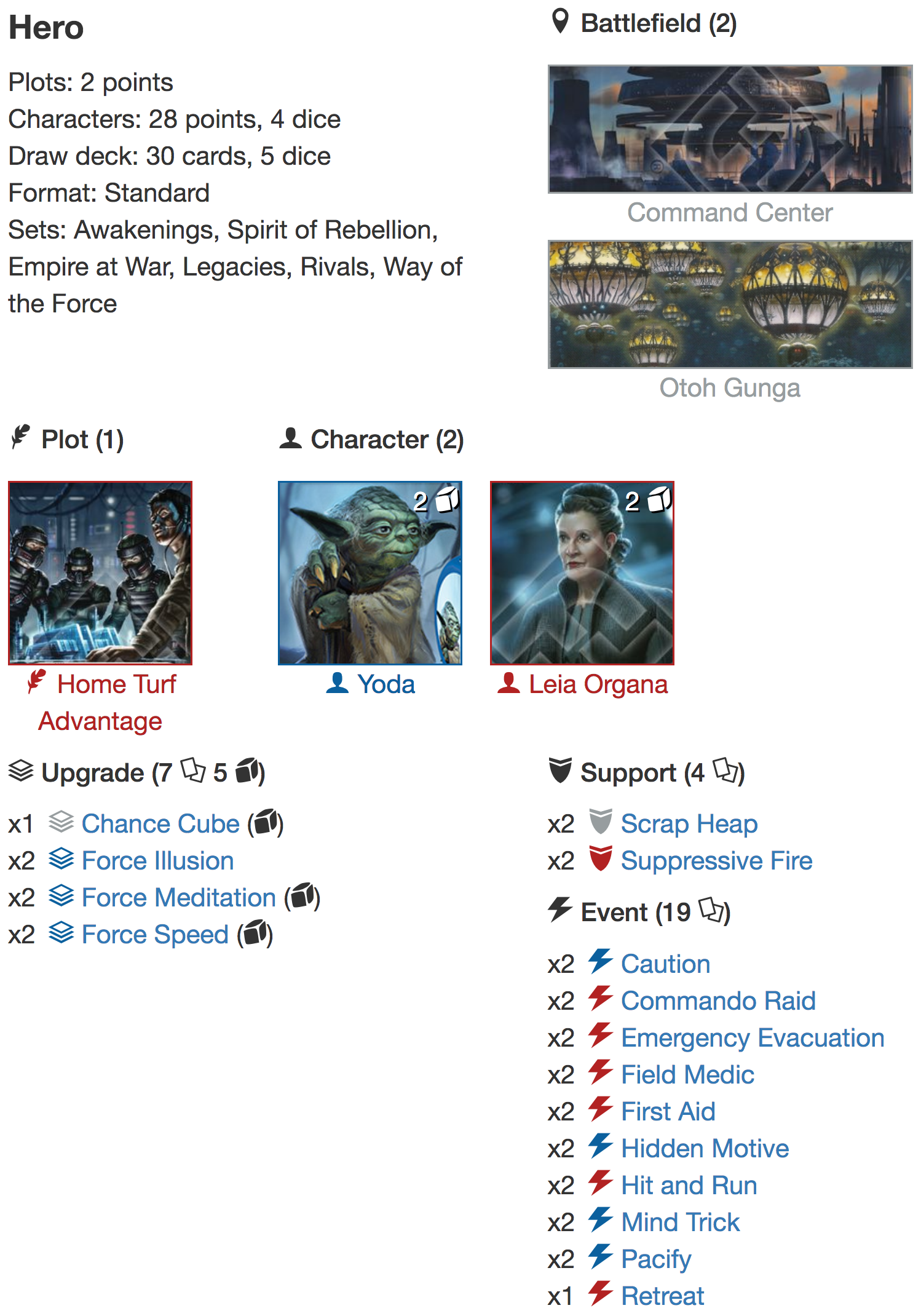 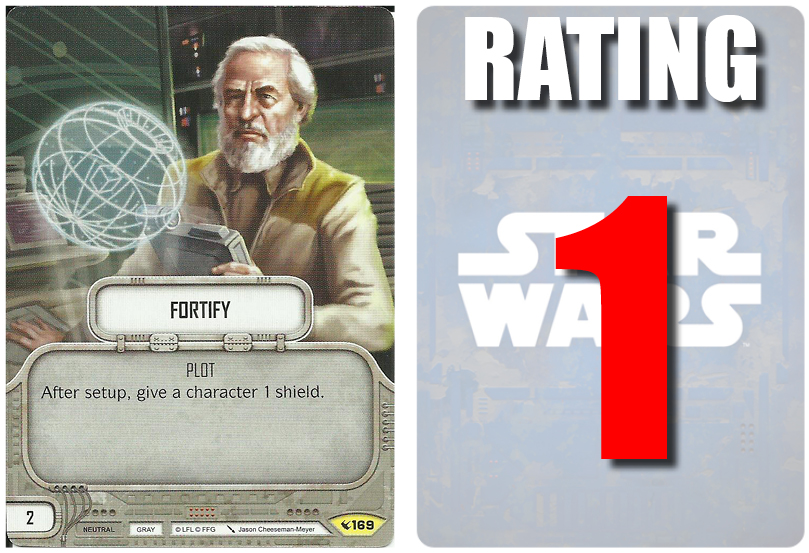 FORTIFY
"After setup gain 1 shield."
Cost: 2
Rating: 1
Like the other 2 cost plots from Legacies, this one is quite straight forward. You wouldn't build your deck around that, but that one extra health might come in handy.

Example decks:
The deck that was piloted by Andrew Eyles to top8 at EUROS 2018. 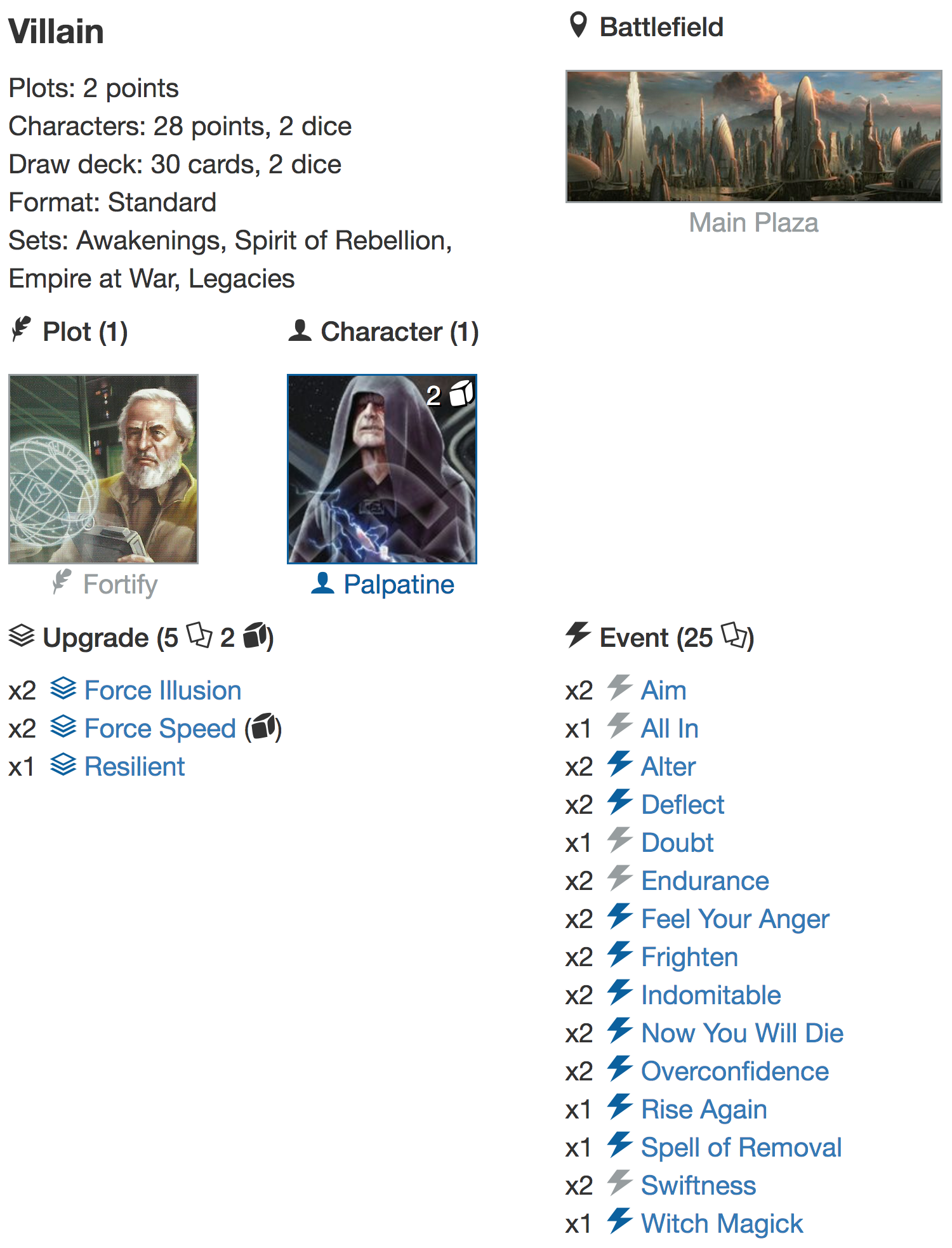 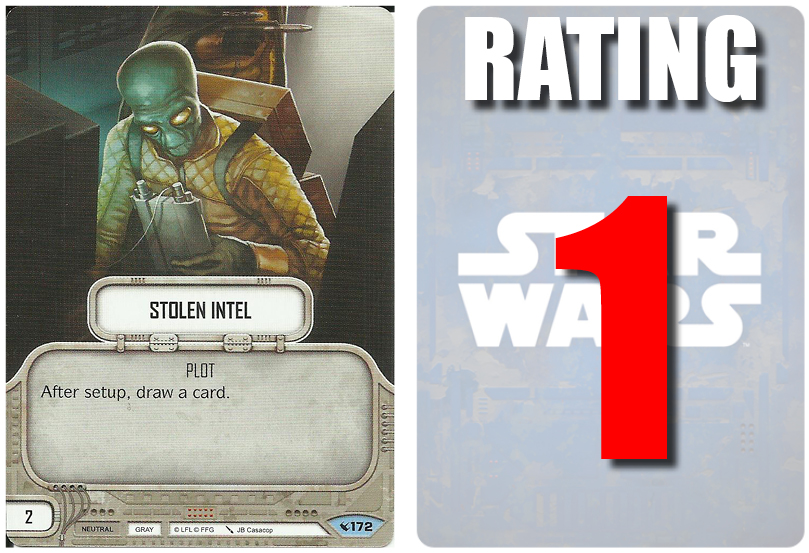 STOLEN INTEL
"After setup, draw a card ."
Cost: 2
Rating: 1
There is not a single deck that does not benefit from an additional card in your starting hand. Possibly having 2 mitigation cards when your opponent plays Friends in Low Places, or finding that crucial ramp card your vehicle deck needs so desperately and, oh, look, a Sith Holocron... Still, in my opinion it's not worth cutting a character die for this plot, but if you can afford it anyways, you should strongly consider it.

Example decks:
This deck was piloted to a double Store Championship win by JimmyD: 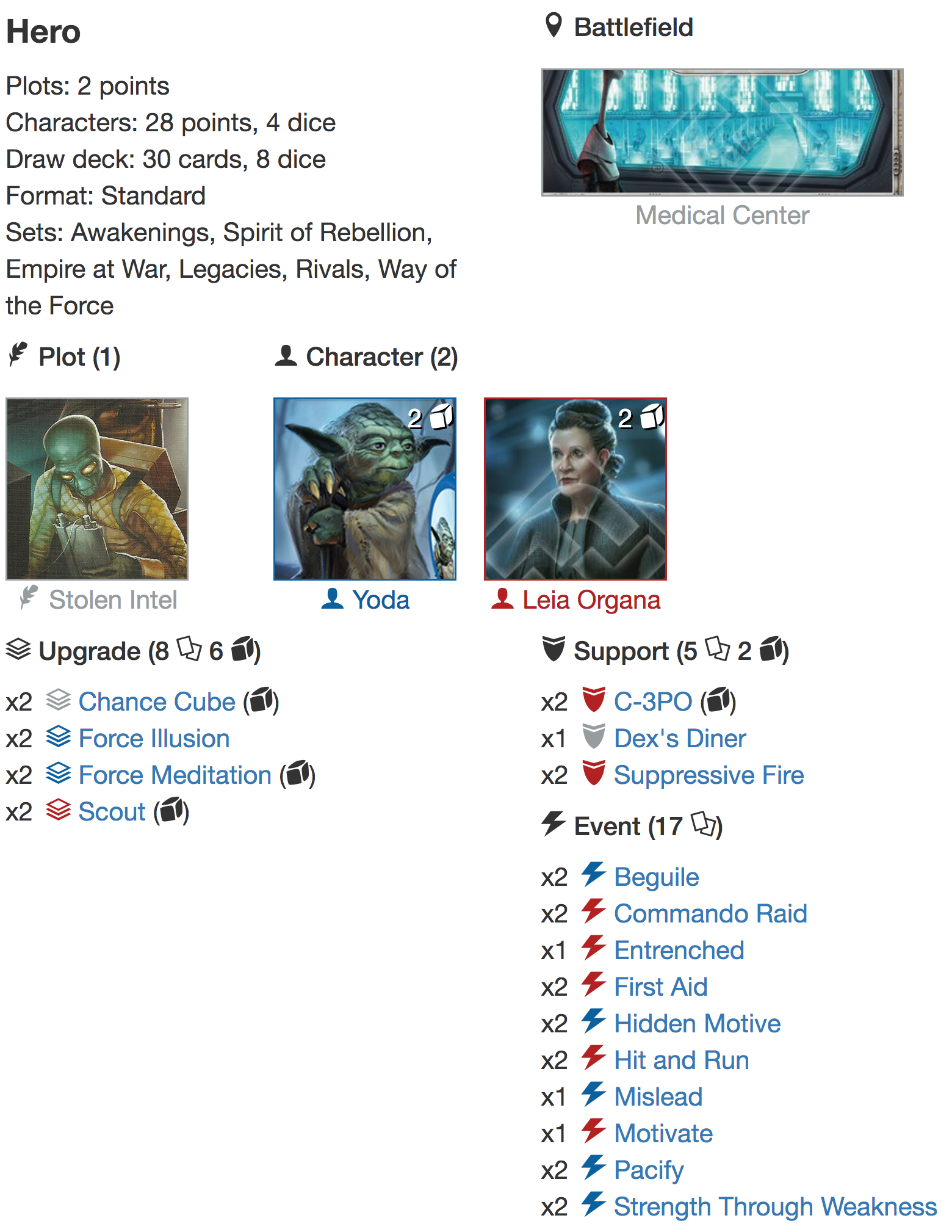 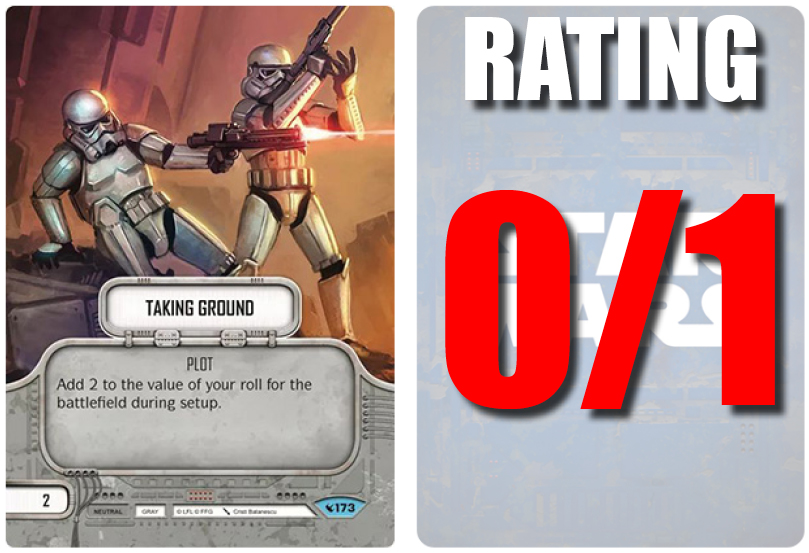 TAKING GROUND
"+2 to roll off  for initiative"
Cost: 2
Rating: 0/1
If you bring a deck that absolutely wants its battlefield, this would be a good choice (i.e. ePoe2/eYoda with Docking Bay and Honor Guard shenanigans or a deck that relies on Emperor's Throne Room). It off sets the fact that some very powerful characters who are quite reliant on controlling the battlefield, or controlling a certain battlefield, but has bad dice in the initiative roll-off can have the game plan augmented, i.e. Arihnda Pryce. 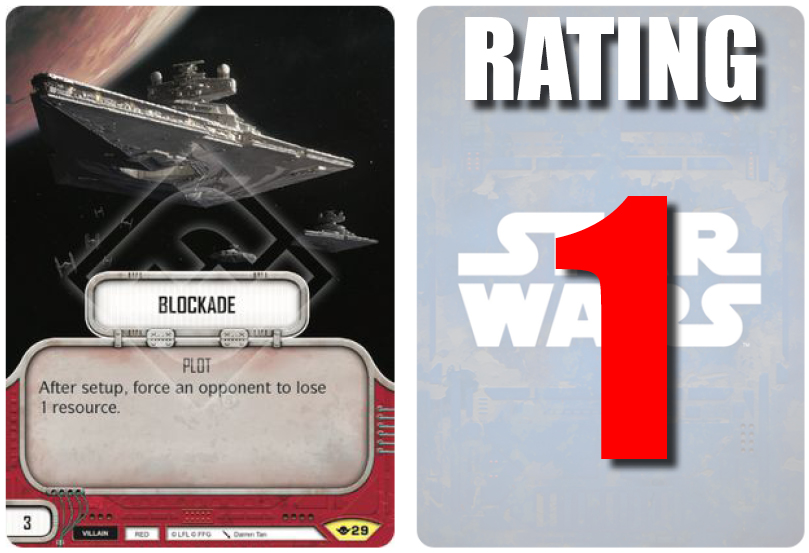 BLOCKADE (red only)
"After setup opponent loses 1 resource ."
Cost: 3
Rating: 1
Having the resource advantage in the first round can have a huge impact since you slow down your opponent from setting up his/her board state (read Mads Utzon's article on resource management). Stifling their options is always great, but people tend to prefer to have more resources themselves than to stop their opponents from having theirs. I know that I would always prefer Profitable Connections over this plot, except if I want a thematic deck with Nute Gunray and Local Garrison. Yet, if a deck that absolutely needs early resources becomes meta defining, this plot could see more play. 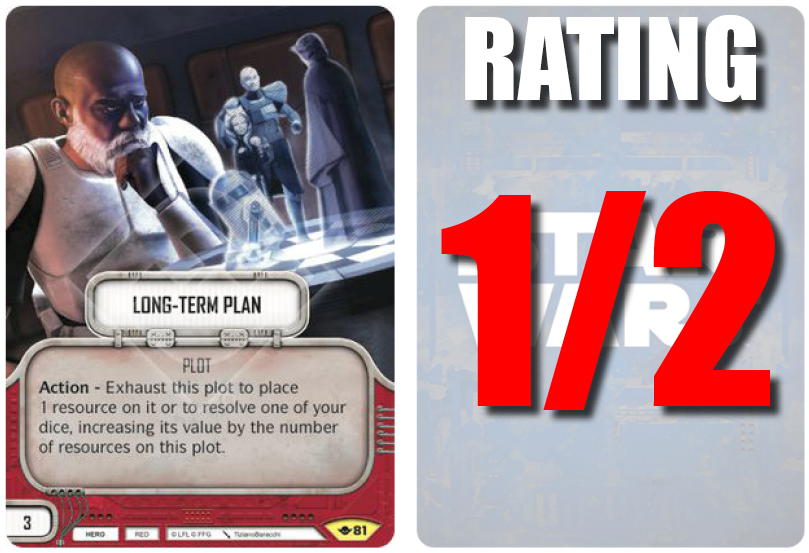 LONG-TERM PLAN (red only)
"Action - Exhaust this plot to place 1 resource on it or to resolve one of your dice, increasing its value by the number of resources on this plot."
Cost: 3
Rating: 1/2
If the statement of FFG lead designer Jeremy Zwirn becomes implemented in actual game design, and games will last for 4-5 rounds before a winner is determined, this will be a very powerful plot in almost any deck. Right now, where games are mostly decided in round 2 or 3, this plot is too slow, but we have to see how the meta settles in the upcoming months.

The sweet spot for this plot will be round 3, when you start resolving dice with +2 every single round. Placing three resources on it will be rarely beneficial, as you have to make sure the game goes to round 6 in order to profit off of it.

An exception might be that if you can defeat a character in round 2 with the +1 from the plot, you should probably take that chance.

In conclusion, if you are able to build a tough deck that makes it to round 5 or 6 in most of its games, this plot is extremely powerful. Additionally, I like the design behind it and hope for longer games in general. 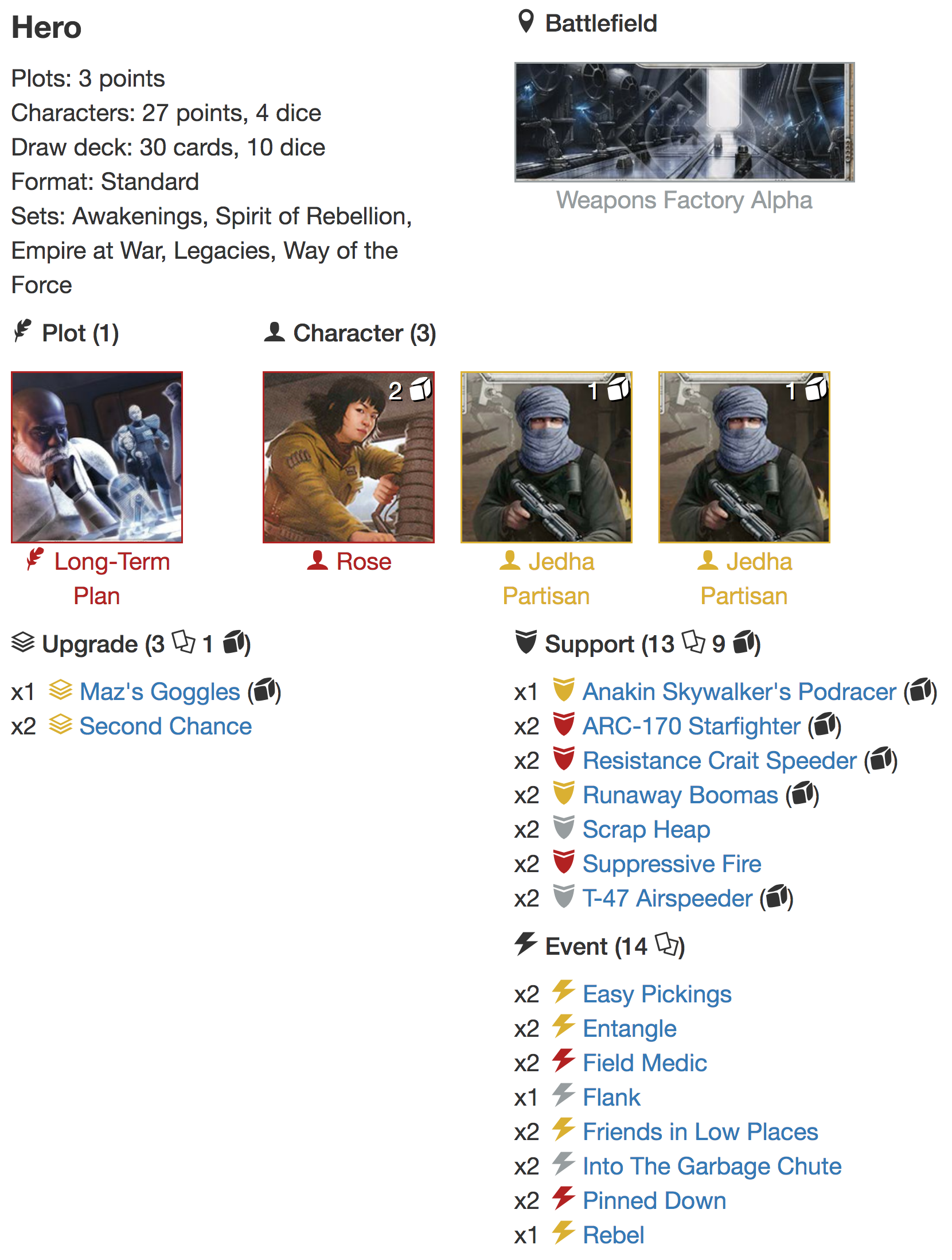 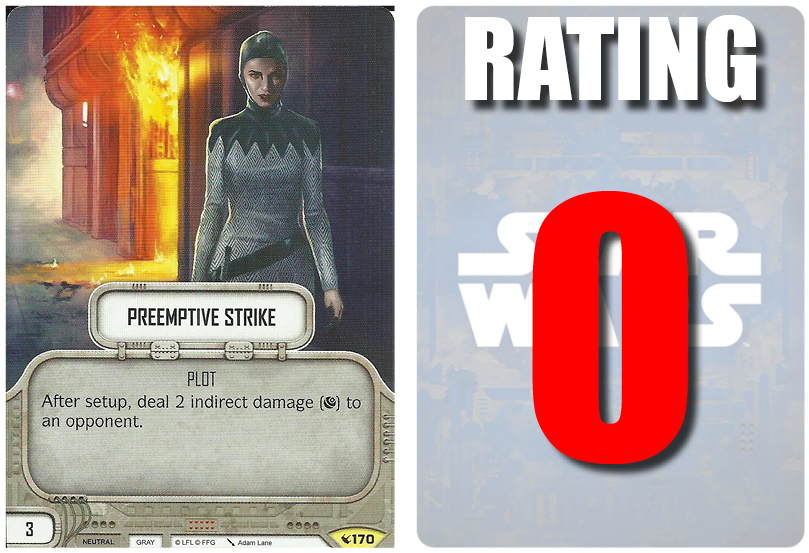 PREEMPTIVE STRIKE
"After setup deal 2 indirect damage"
Cost: 3
Rating: 0
Would you pay one resource for 2 indirect damage in round 1? Play Profitable Connection and read Mads Utzon's article on resource theory. 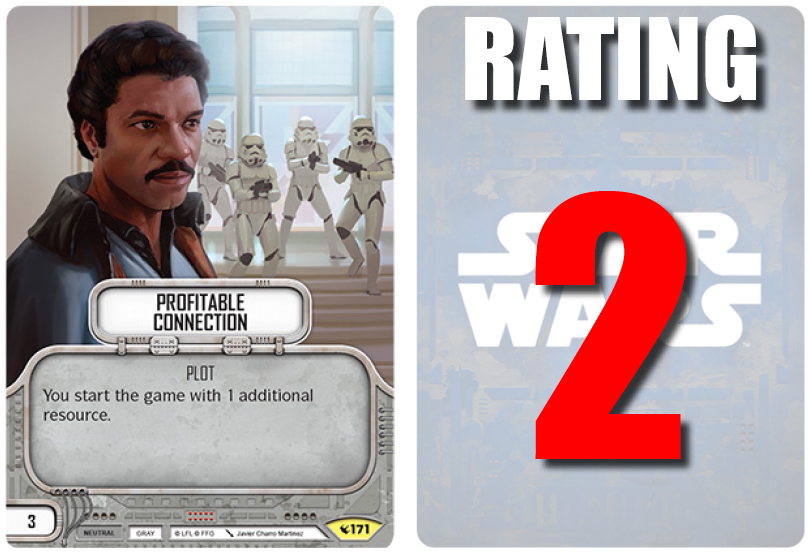 PROFITABLE CONNECTION
"After setup gain 1 resource"
Cost: 3
Rating: 2
I guess you already know how we think about resources, and you remember the power of Rey/Aayla pre-nerf. The options it gives you in round 1 are basically endless, from playing a powerful 3 cost upgrade right from the start or a 2 cost upgrade and a 1 cost removal without having to resolve a die can be huge. Getting an additional resource this early will have an impact on any game, period. 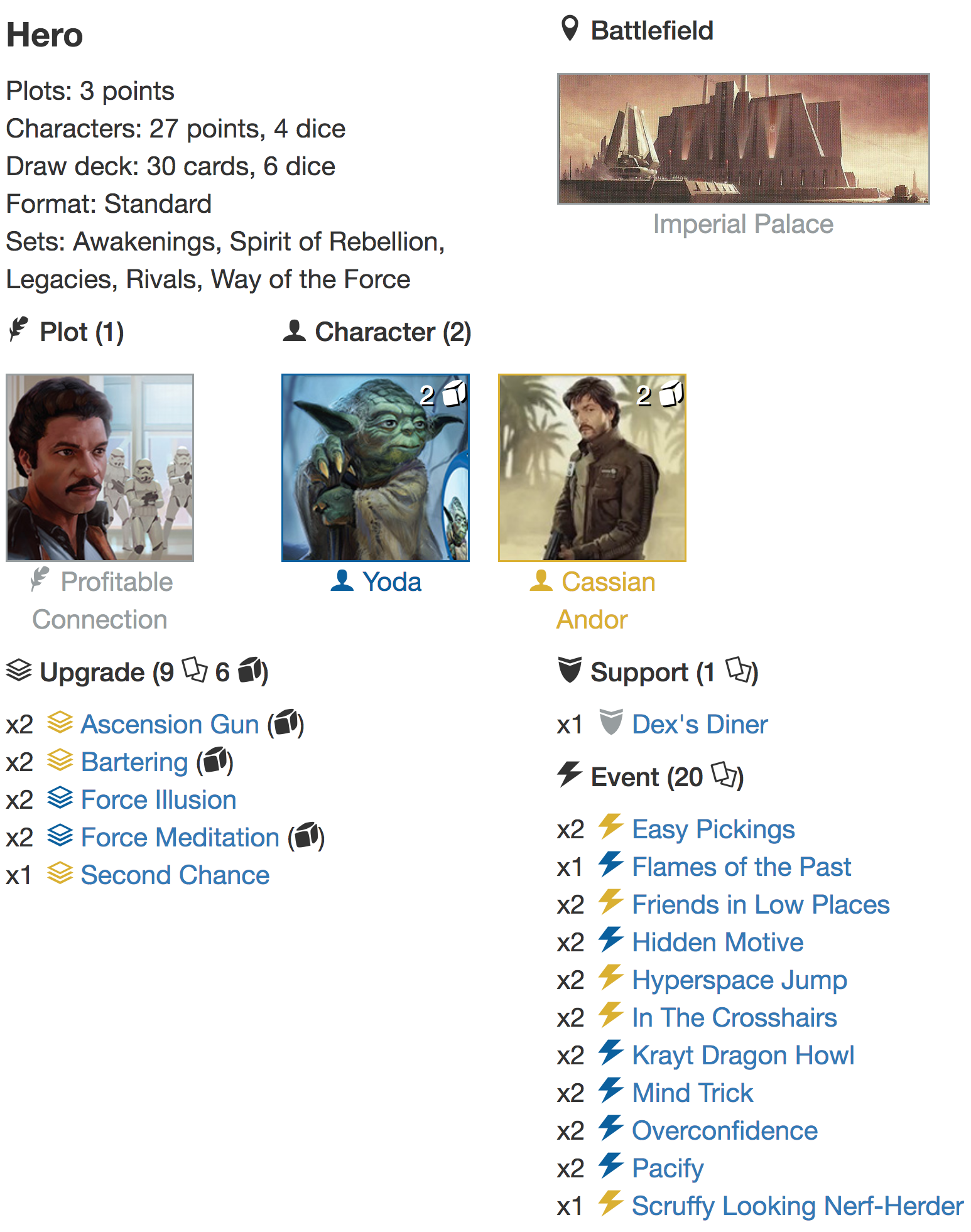 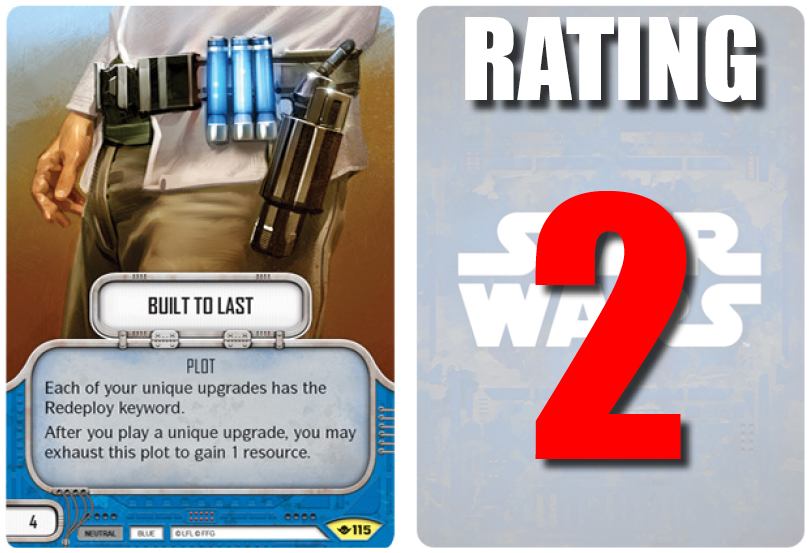 BUILT TO LAST (blue only)
"Every unique upgrade has redeploy. After you play a unique upgrade, exhaust and gain 1 resource."
Cost: 4
Rating: 2
Now this is the definition of a plot you want to build your deck around. Getting one resource back and having the (mostly) big upgrades up and running for the rest of the game is awesome! With 12 Hero, 7 Villain and 2 Neutral unique upgrades, there are now enough choices to get the most out of this plot. Also interesting: You have to have the resources to pay for the upgrade in the first place, it is not just a Profitable Connection 2.0. 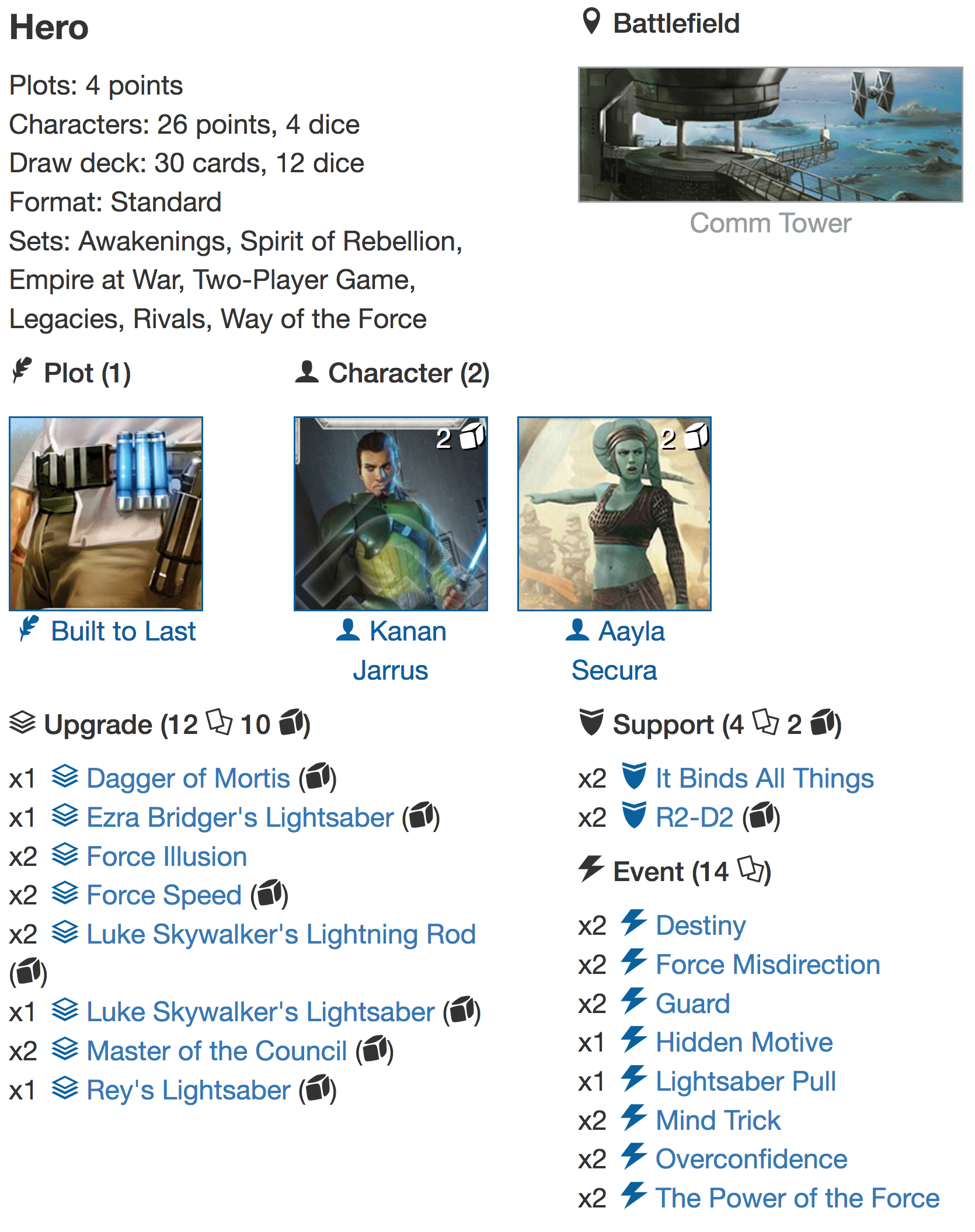 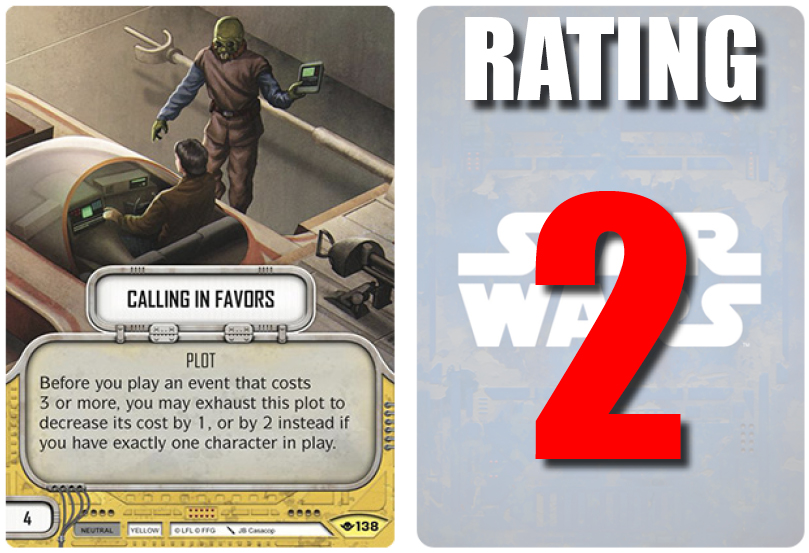 CALLING IN FAVORS (yellow only)
"Decrease a 3+ cost event by one. Or decrease by two if only one character is in play. "
Cost: 4
Rating: 2
With so many powerful yellow events, this one seems to me like one of the strongest plots in the game. Playing a Hyperspace Jump or a Never tell me the odds for 2 / 1 resources sounds just ridiculous and leads to very creative and crazy builds. Read Brendan Devitts article about SOLO SABINE if you are interested in this plot and watch Mike "The Rebel Spy" on YouTube (he also took down a Store Championship using Solo Sabine). But this, more than any other plot, needs you to build the deck around these highly costed, powerful yellow events. High risk, high reward. 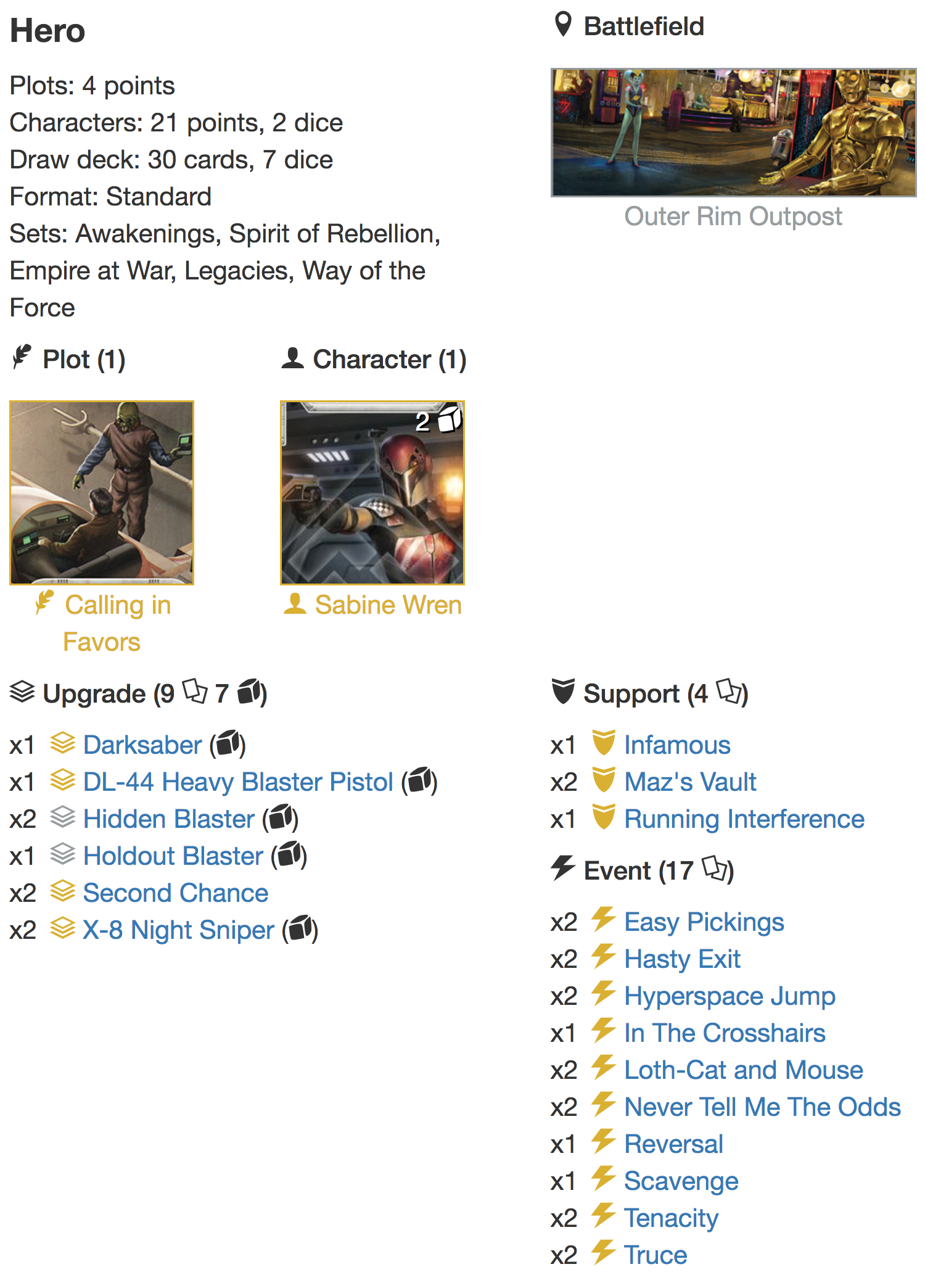 3. CLOSING THOUGHTS:With the addition of new high cost and more impactful plots, some „spot plot“ cards and colour specific plots the deck building process has been influenced a lot. I think plots will become even more important, if you consider the presumption that there will be character point increasing plots in future sets (read our run-through of the spoiled set: Across the Galaxy).

Do you agree/disagree with our assessment? Let us know and maybe send some interesting deck lists or experiences you made with the new plots to yourdestinypodcast@gmail.com.