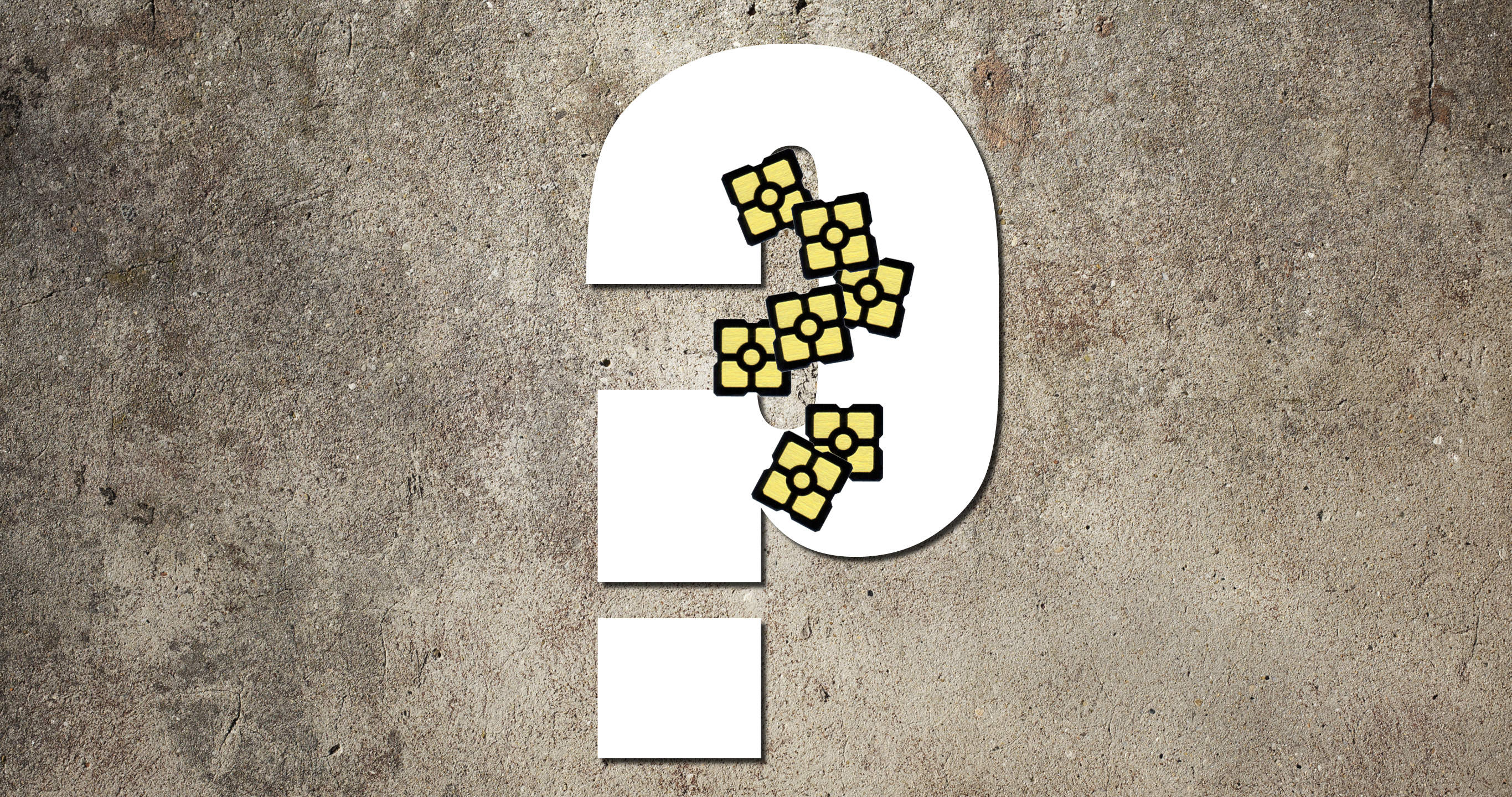 INTRO:This article is about the importance of RESOURCES in a game of Star Wars Destiny and how highly you SHOULD value them. It is important to note that the state of the game is ever changing, and that this is only a glimpse of how I see (one facet of) the game right now. However, hopefully things will not change too drastically and my estimations will stay more or less true despite changes in the meta game and the game itself.
RESOURCES:It is obvious though that the value of a RESOURCE changes throughout a single game of Destiny. Round 1, you only get two resources (unless you alter this by adding Profitable Connections or Lando Calrissian), while you draw five cards and normally have 4-5 character dice to work with. This naturally makes resources your most scarce (and valuable) commodity.  However, at the end of round 4 the situation might look very differently. 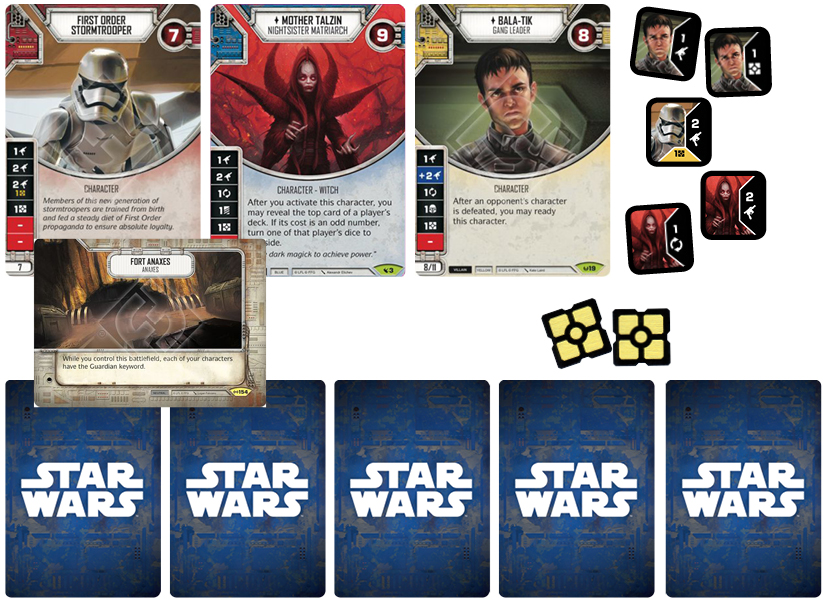 So how do you estimate the value of a RESOURCE throughout a game?
There is no straightforward answer and it changes from deck to deck, board state to board state and sometimes even hand to hand. The main goal of this article will be to try and give you a better understanding of when to resolve dice showing Resources, when to Disrupt your opponent’s resources, when to save resources for later and when to use them immediately.
ROUND 1 ESTIMATION OF RESOURCES:Resources round 1 is the most important thing in the game. A game of Destiny is won on the board, whether by controlling your opponent’s board state, while attacking his or her deck or by building a superior board state to outpace your opponent. Building or controlling the board state is key, and both require Resources.

When playing Rey/Aayla, you tend to pick your opponent’s Battlefield. Starting the game with shields is a 4 point damage swing in your favor, and add to that the one or two potential damage you get out from the Rey activation trigger (with shields on her), and it is easy to understand the amount of pressure you are applying by simply letting your opponent get the initiative.

Even though picking your opponent’s Battlefield is worth at least 5 damage, it would still be the correct choice to choose your own Battlefield against certain decks, i.e. a vehicles deck. Weapons Factory Alpha, which is the natural (and really only) Battlefield choice for a vehicles deck, allows your opponent to play their first vehicle at one resource cheaper and that is NOT in your interest. Even though you are likely to claim and keep them from deploying vehicles at a reduced cost from round two and forward, the one resource gained round one is worth more than the 5point damage swing. That is a testimony to how powerful Resources are.

DO NOT PAY FOR DAMAGE SIDES ROUND 1:
I am working from a theory that unless you play very specific decks with very unique or aggressive game plans you cannot resolve a die that shows 2dmg for a resource round 1, extending into early and sometimes all of round 2. If my Holdout Blaster hits the 2 for a resource I will be re-rolling it. Even if it is the last die side showing AND I have the resources to pay for it, I will be trying to construct a game-plan that doesn’t involve resolving it.

NOTE: Of course every game is different and if resolving the die means killing off a character or putting them within reach of a kill early round 2, things are obviously different, but for most games you are not looking to resolve 2dmg for a Resource in round one. You are better off going into round two with 3 resources.
"SPINNING OUT OF CONTROL": 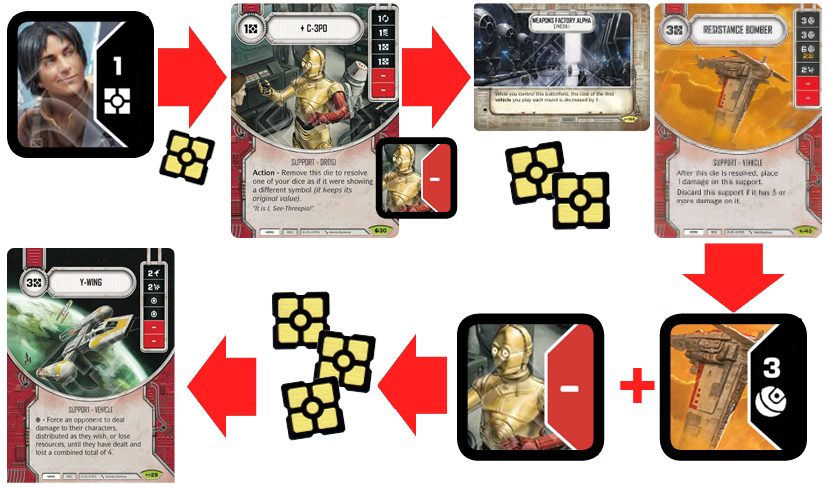 A single resource round 1 can “spin out of control”.  Imagine you play a vehicle deck, and you hit a Resource side on your Ezra die. You resolve the die and spend that resource playing a C-3PO. Controlling the battlefield (Weapons Factory Alpha) you are able to play a Resistance Bomber by spending your remaining 2 resources. You activate the Resistance Bomber and manage to hit the 3 Indirect Damage side allowing your C-3PO (no matter the die side on this die) to turn the 3 Indirect Damage into 3 Resources giving you enough resources to play a Y-Wing. You end round 1 with a vastly superior board state and are now in a commanding position to cruise through the game applying constant pressure on your opponent, which will eventually be too much to handle. 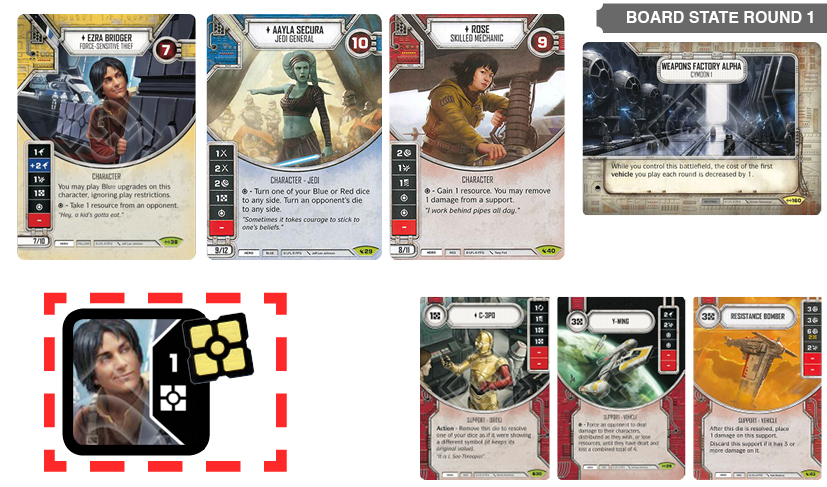 OR   Imagine you play 5dice Villain (OG version). You play a Promotion. Later, you discard to re-roll to hit more Damage sides on your dice and you hit the Resource side (on the Promotion). You resolve it. Now, Promotion didn’t “cost” you any cards (since you drew one when you played the upgrade), it gave you an extra die, and also repaid itself in Resources. You can overwrite it next round to save you an additional resource, deploy more weapons and improve your board state.

The round 1 Resource side on Promotion made it functionally similar to an Enrage, that didn’t damage your own characters (or a Well-connected where your opponent didn’t get to draw a card, or a Truce where your opponent did not get a resource), you didn’t lose any cards from it (in your hand) and it facilitated the discard to re-roll allowing you to optimize the other dice in you dice pool.

OR Imagine you play Boba/Seventh. You play an Ancient lightsaber, hit and resolve the Resource side. This will allow you to play the Force Illusion that was otherwise stuck in your hand. Now, because you got to play the Force Illusion, you get to draw one more card next round, greatly increasing your chance to draw the cards you need. Picking up a resource round one essentially gave you more staying power and options for the rest of the game.

CONCLUSION:
I tend to value a round 1 resource about the same power level as 5 indirect damage, or 2,5 direct damage. Making the 1 resource side the best side on almost any die round one.

ROUND 2 ESTIMATIONS OF RESOURCES:It is my experience that 9 out of 10 games of Destiny are won before or by the end of round 3. It might not be finished yet (and might end up going as long as 5-6 rounds), but I firmly believe that you can tell with a 90% certainty who will win the game going out of round 3.

To me, this makes round 2 the most difficult and highest impact round in the game. Are you still trying to protect yourself and setup? Or do you gain momentum with a quick character kill. Both strategies comes with pros and cons. In round 2 you are either under A LOT of pressure facing down an opponent looking to kill one of your characters OR you are starring down your opponent trying to kill one of his. OR both could be happening at the same time. This makes for an interesting and in many cases decisive round.

If you activate a character and hit Resource this will allow you to pick them up fast, thus allowing you to protect your characters while playing upgrades on characters not yet activated. Essentially providing both pressure on your opponent while relieving you from theirs. However by the end of the round when both players have rolled in and is looking to claim to get initiative for round 3. The Resources matter A LOT less and should be re-rolled into damage or even left unresolved in the pool in order to secure the claim, even though you were very happy picking them up earlier in the same round.

The reason I value them so low from action 9 and going forward, is because of the importance of claiming round two. As I said earlier I think that 9 out of 10 games are finished by the end of round 3. The start of round 3 is where both players have built up their characters and they are ready to finish the job. In a lot of games, neither player were able to kill off the opponents character round two, but have put in so much damage that one more roll out will almost certainly result in lethal damage. Having the initiative to roll out and threaten to kill round 3 is so important that you have to value any dice much lower than you normally would.
ROUND 3 ESTIMATION OF RESOURCES:In round 3 resources really aren’t too important. For the most part you will be looking to spend all your resources mitigating dice, and you only play more upgrades if the game allows it. That being said. Some games do drag on and picking up resources early round 3 allowing you to both apply more pressure or go defensively with mitigation can be useful. This is a round where you need to either keep your characters alive or kill off the opponents faster than he is killing yours. Resources in round 3 should primarily be used to do one or the other where it is playing mitigation or paying for pay sides on your dice.

CONCLUSION:
In round 3 It is generally better to discard to re-roll your dice into damage than to pick up resources to play more upgrades or supports. Resources go up in value if your hand is full of mitigation, down in value if you only have upgrades in hand.

If the mitigation in my hand cost 2 or less I tend to value Resource side in round 3 as 1 Indirect damage or 0,5 direct damage. If my mitigation exceeds 2 or I have paysides showing on my dice I tend to value resources at 2 Indirect or 1 direct damage.
ROUNDING UP:It is a dice game and nothing is set in stone. If you are playing against a 3wide deck it doesn’t make sense to rate Indirect or direct at a 2:1 ratio. The same is true if there is just one character left on your opponent’s side.

Also the rating should go up and down depending on individual decks, viewed differently from game to game, round to round, hand to hand and even sometimes from card to card. Here is an example:
You’re playing Boba/Seventh and this is your hand: (Hand 1)

The hand above doesn’t need any additional resources to be fully functional. In fact, between Friends in Low Places picking out your opponent's mitigation, and Bait and Switch applying pressure and fixing your rolls this hand is very happy not rolling resource sides (beside the one for Bait and Switch). With those 5 cards in your hand, the value of resources isn’t high and your priority should be to get in as much damage as possible. Even if that means you have to discard to re-roll. In the above example you are likely to discard He Doesn’t Like You in order to re-roll into more damage.

Change one card in the hand and it plays out very differently: (Hand 2  )

With these 5 cards you would very much like to roll (and resolve) a Resource side. You cannot set up that big chunk of damage by removing your opponent’s mitigation with FiLP, and in order to be 100% functional it needs to pick up a resource. This hand will likely play both of its mitigation cards and pitch the Bait and Switch to re-roll into resources in order to play a defensive Force Illusion. This will allow the deck to play a more defensive game where resources matters A LOT more. Hand 2 is looking to resolve as many Resource sides as it can, therefore not needing the Bait and Switch.