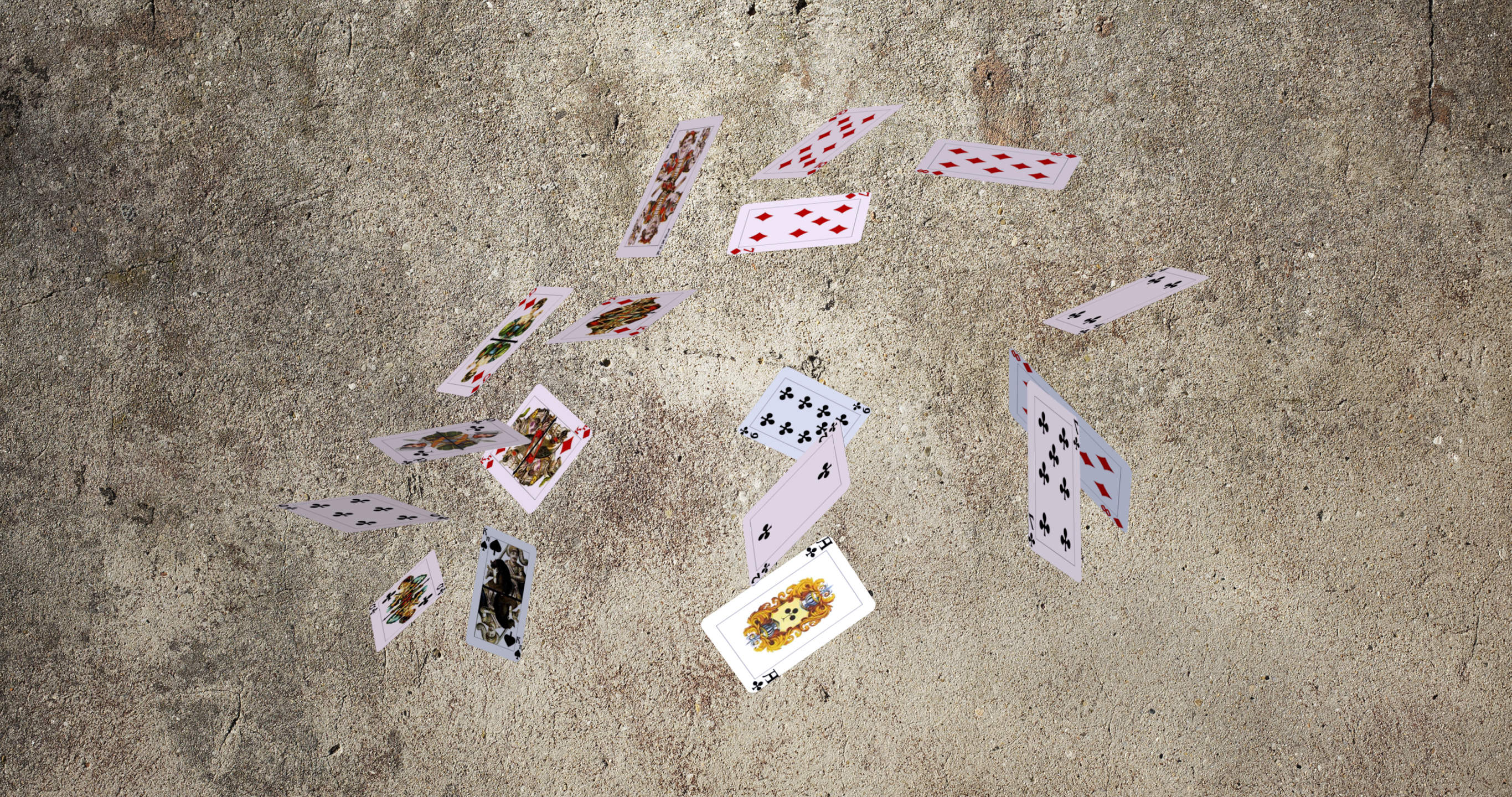 THE MULLIGAN:One of the hardest and most important disciplines to master in the game of Destiny is the initial draw! It is so darn important because it has the potential to straight up determine games. It is also the only draw during the entire game you have an actual impact on (well ... that's not entirely true, but we'll talk about that later).

So you get to draw 5 cards, then mulligan, that is to select which cards to keep (if any) and which cards to shuffle back into your deck before redrawing back to your starting hand size (5 cards). Any player worth his salt needs to have a mulligan strategy! Often mulligan strategies are determined by the deck being played, but sometimes qualitative factors such as play style, opponent's deck, etc. factors in as well.

Many games of Destiny have been won or lost on mulligan strategies. Just think about it: How often have you cursed your starting hand and blamed it for the loss you took? I think we've all been there.

Looking back at that game. Right there in the beginning when you shuffled your cards, had it cut by your opponent and drew your first 5 cards, did you choose the right cards to mulligan?

How about this situation? You are playing Boba/Seventh (the version which is featured in our gauntlet as of 14/06/2018). 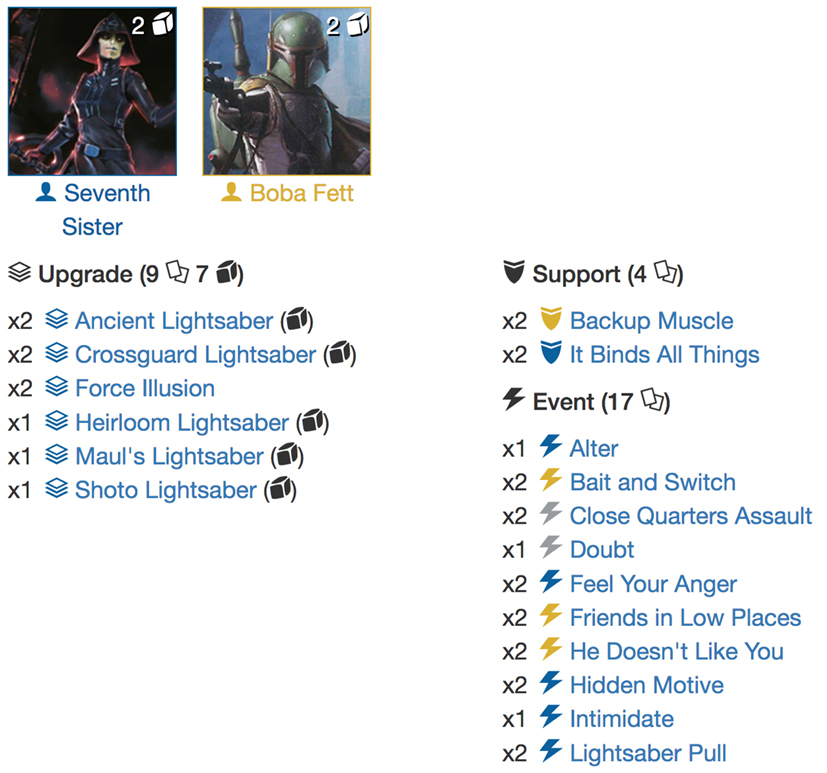 And you draw into the following hand (before mulligan):

The question is "how do you mulligan now"? You know that you probably need upgrades, and you didn't draw a single one. You have 7 weapon upgrades and 2 Lightsaber Pull in your deck, so that's 9 cards out of 25 remaining in your deck. More than 1/3 of the deck or equaling just shy of 35% chance that you put 1 card back into the deck, shuffle and draw 1 weapon upgrade (or Lightsaber Pull) from the deck.

So, how do you mulligan? Do you keep your mitigation (He Doesn't Like You), obviously dependent on your opponent's deck, but more often than not having a mitigation card is a good idea. It Binds All Things for that early ramp? But then again, there's no upgrade to be played. How about Intimidate? That could potentially be 2 damage out of hand if you lose the initial roll-off (and your opponent chooses your Battlefield and the shields). Bait and Switch is also nice to have for some early pressure on one of your opponent's characters, while the Close Quarters Assault can be such a devastating early game card. So, which card(s) do you keep?

What you basically have to ask yourself, if you think that upgrades are going to be an important part of facilitating your win condition, is how great a risk are you willing to take? Is the risk of 20% of not drawing into an upgrade too big, then you should mulligan all 5 cards out of your hand to reduce that risk to 14%. Are you willing to go at 30% risk because Close Quarters Assault and He Doesn't Like You are simply too good to let go off? Then mulligan 3 cards out of your hand and keep the two. Very often you are controlling (parts) of your own fate in Destiny. Your ability to mulligan correctly is often a vital part of that control.

A good piece of advice for decks relying on upgrades to win the game is always mulligan hard for upgrades if you don't get it in your starting hand. Upgrades are good round 1 and 2, and will gradually get "worse" round 3 and beyond (if we assume the game is going to last 4 rounds, then an upgrade played round 1 could potentially be resolved 4 times. An upgrade played Round 4 would only resolve once). Whereas mitigation will always be good (the impact might not be as great in the late stages of the game, but their effect is the same). You'd rather see 3 pieces of upgrade in your starting hand than none and it's conversely pretty bad to draw into 3 upgrades in round 3. That obviously changes if your win strategy is based on milling your opponent out, in which case you'd probably want to keep (or see) at least one mitigation card early on.
DIGGING FOR CARDS:Sometimes you just need specific cards. It can be cards that are paramount to a character's survival (i.e. a Second Chance, Force Illusion, Witch Magick or a Hyperspace Jump) ... The equation is basically the same as with you mulligan strategy. What kind of risk are you willing to accept? Look at this example where you are piloting Sabine/Ezra. 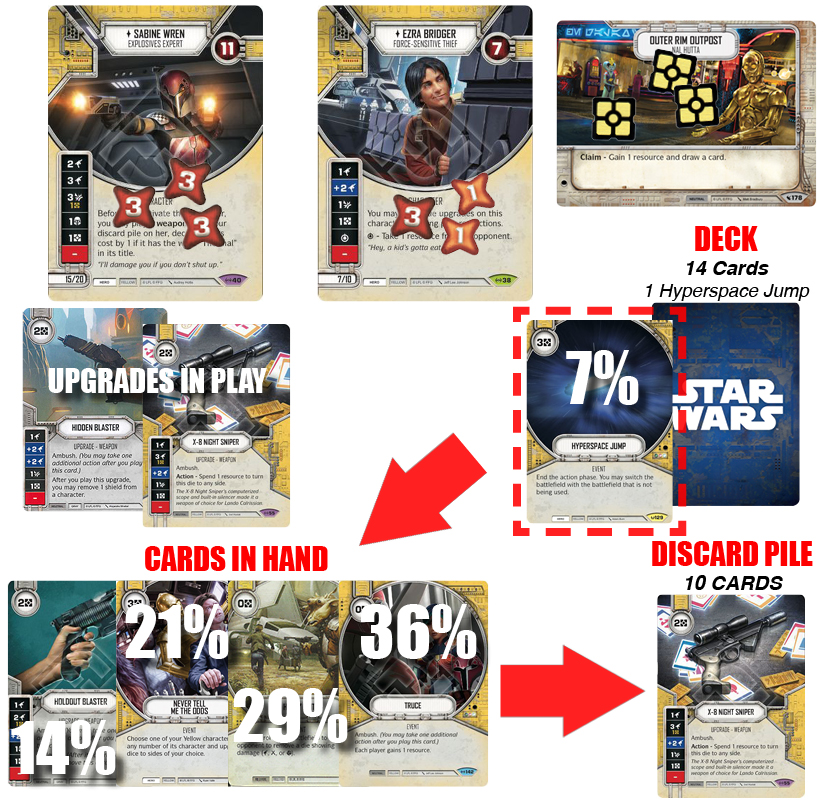 Not discarding any of your cards to draw more cards in upkeep, changes the odds significantly of drawing into the card(s) you need. In the example above, the odds swing from 36% chance of drawing into your last Hyperspace Jump IF you discard you entire hand and draw 5 new cards from your deck of 14 cards, and:

... and if you keep all your cards in your hand and just draw 1 card, you'll be down to a measly 7% chance of drawing that vital Hyperspace Jump. What odds are you willing to accept?

If you spice up the equation a bit, and imagine you are looking for either 1 Hyperspace Jump OR 1 Second Chance (of 2 remaining in the deck), so one of three cards in a deck of 14 cards remaining, your odds would be:

So, as a fun gimmick to end the article, I asked some of the members of our testing group "the European Gauntlet" to have a shot at creating the best starting hands for the following decks. It's obviously going to be a tough one, because decks differ a lot, but on the other hand, it's going to give any competitive player an edge in any match-up if he's able to reliably construct the composition of an opponents hand at any given moment.

We have a few guest appearances from Edwin Chen, the World Champion 2018, who is going to give us his preferred 5 cards in his starting hand using Kylo2/Anakin. Joe Colon aka HonestlySarcastc (of the Hyperloops) for the best starting hand to face all-comers piloting Drive-by-Shooting, and Jonathan Magnuson (from The Destiny Council) to advice us on his perfect starting five for 5dice villain.

(Try and make your own guess before seeing the results from some of our Gauntlet members): Space has been left in between the various decks and the suggested starting hands!eSabine/eEzra (one of the best and most feared Big/Little decks out there).

eRey2/eAayla (consistent, tanky and maybe the strongest deck in the Legacies meta).

eKylo2/eAnakin (the deck that Edwin Chen piloted to claim Worlds 2018. SUPER aggressive and maybe the best CQA deck in the format).

Drive-by-Shooting (This rainbow deck packs a punch and is deceptively good at focusing characters down round1, while also being good in defense).