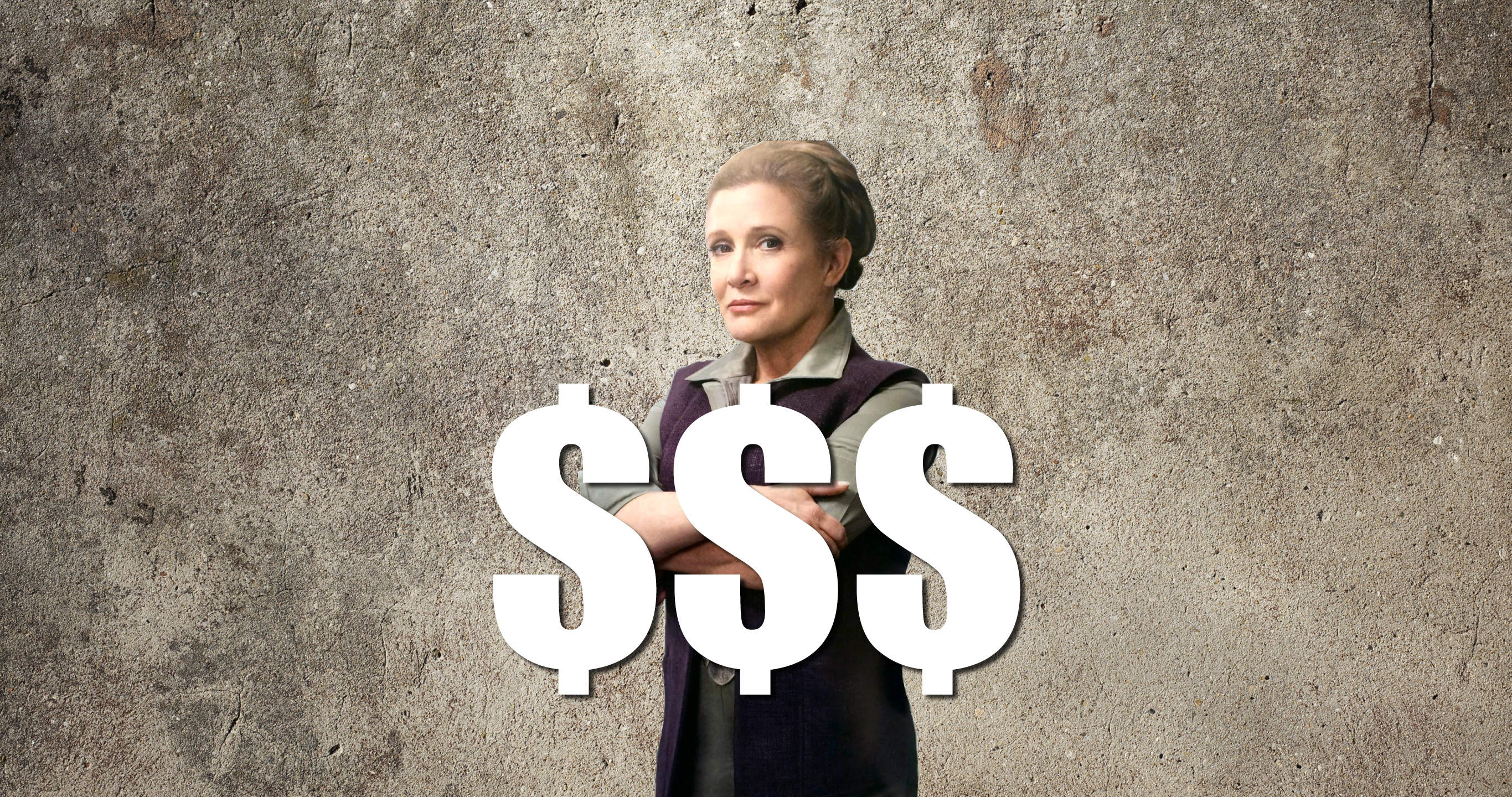 1. INTRODUCTION:The budget list is a new ongoing series at YOUR Destiny where we are taking a look at decks which we believe to be competitive, but limited to:
Max. value pr. single: 20$
Max. total value of deck: 50$

(Common and Uncommon card are generally evaluated as 0$ and we base our price estimate on the Chance Cube Price Watch Average Price. We also evaluate cards found in the current Starter Set(s) and Rivals Draft Set as relatively inexpensive, although they might have a fairly high price when purchased as singles, i.e. Hidden Motive. This is simply due to the fact that we consider all of those sets as MUST HAVES - no matter your level or commitment of investment).

As we are moving towards the first rotation of all the cards in the first cycle (the Awakenings Cycle) in Star Wars Destiny, a lot of players might be reluctant to commit too much money into buying cards that will cycle out of Standard and Trilogy Format come early 2019. For those players looking into an relatively inexpensive, yet competitive Standard Format deck might be a good starting point.

We do know that there are varying opinions on what is "inexpensive", "budget" or even "competitive", and while we acknowledge that the interest, possibility of purchase or ambition is different from player to player, we feel that the upper cap of 50$ is both adequate for being able to construct a competitive deck AND a relatively small investment.
2. OTHER DECKS IN THE SERIES:(CLICK the image to go to the other articles in our on-going BUDGET DECK series): 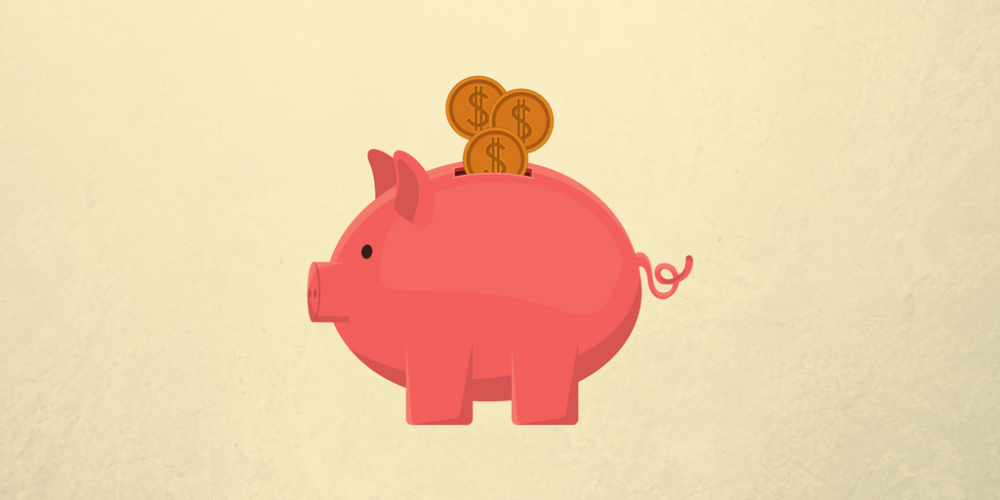 3. HERO MILL DECKS:
Most Mill decks tend to be very cheap because you do not need as many expensive upgrades and supports as most other decks, i.e. Ancient Lightsaber, Force Speed, etc. The king of mill decks is currently the infamous eYoda/Cassian/Anakin aka Millionaires, but as Yoda is one of the most expensive single cards in Star Wars Destiny, he is not a choice for a Budget Deck, so we are going to have to look elsewhere for our character pairing.

(If you are interested in the eYoda/Anakin/Cassian then we already have an extensive analysis on the website written by Tobias Winter, so do check that out as well).

My initial thought for an alternative to the 3wide hero mill deck that took the early Way of the Force meta with storm was Leia/Cassian, but that's two legendary characters, which can easily come in at 100$ in singles value, and they also have a very low health pool to boot. An alternative route could be trying to go for Leia/Padme aka Heartwarmers (which prior to the emergence of the 3wide mill was considered one of the fastest and best mill decks in the format), but I do believe that the following deck could be the closese you'll get to a low budget top tier deck for any budding mill player out there: 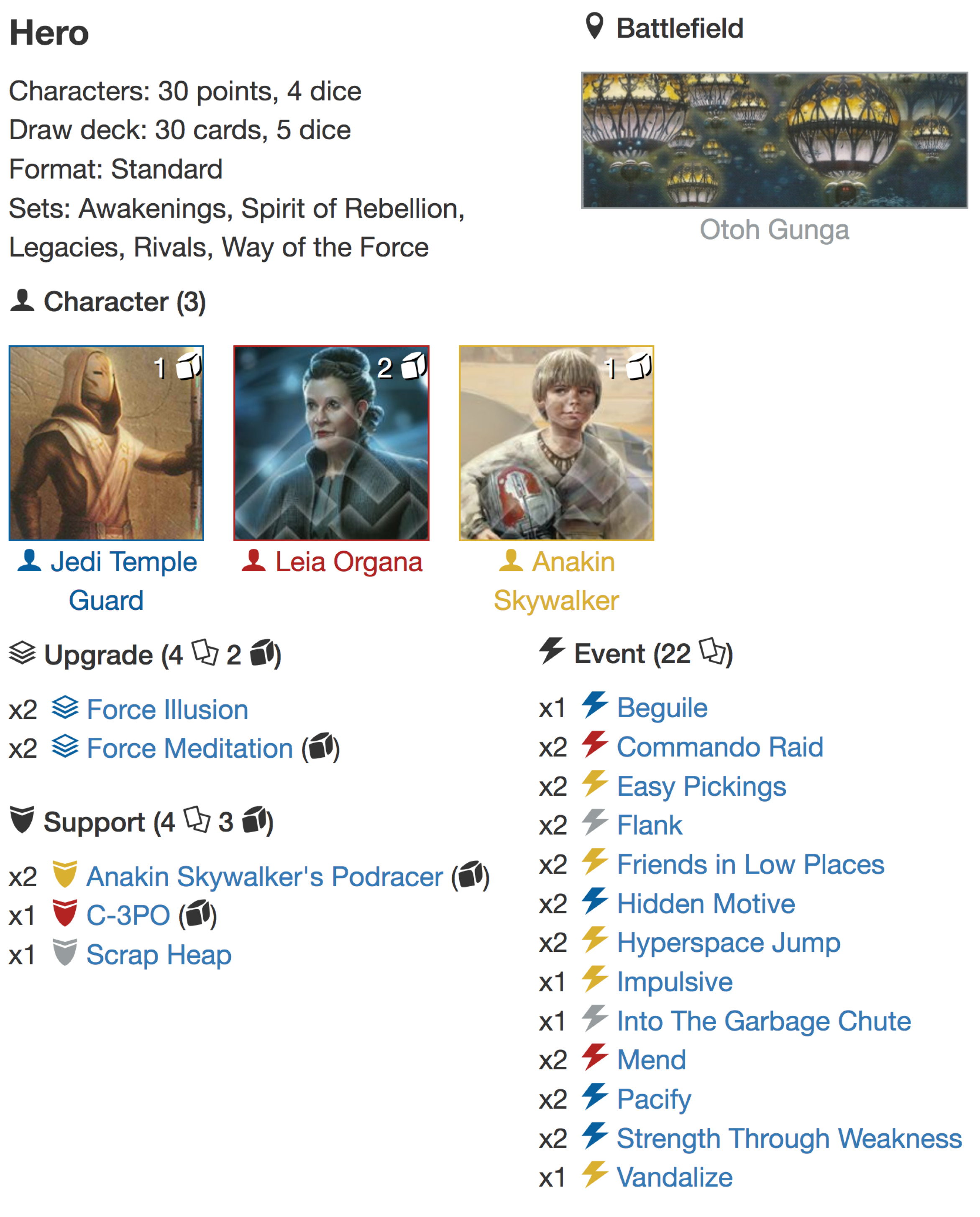 3. CHARACTERS:The deck boasts a relatively high health pool, 26hp, including a character with Guardian and fast/reliable hand and deck destruction, and the three characters gives access to the entire card pool, which is even more important when looking at a budget deck list.

The deck came to my attention after it was piloted by Thomas Roither from Austria at the German Nationals 2018 into top16. Thomas is a dedicated Mill player, but as he didn't own any Yoda OR Cassian, he decided to - out of necessity - to test out another, very similar and cheaper version of the well known Millionaires deck. Except Leia, who can be found for around 15$/card, this deck is really really cheap – so if you are interested in a budget mill deck, try this out first!

In the beginning I have to admit that I was quite sceptical reviewing this version, but after Thomas' great run into the top16, I decided to have a closer look at the deck and run a few test games with it. The tests went really well! So I asked Thomas Roither to share some of his thoughts behind the deck (which in the article is indicated with "quotation marks"). 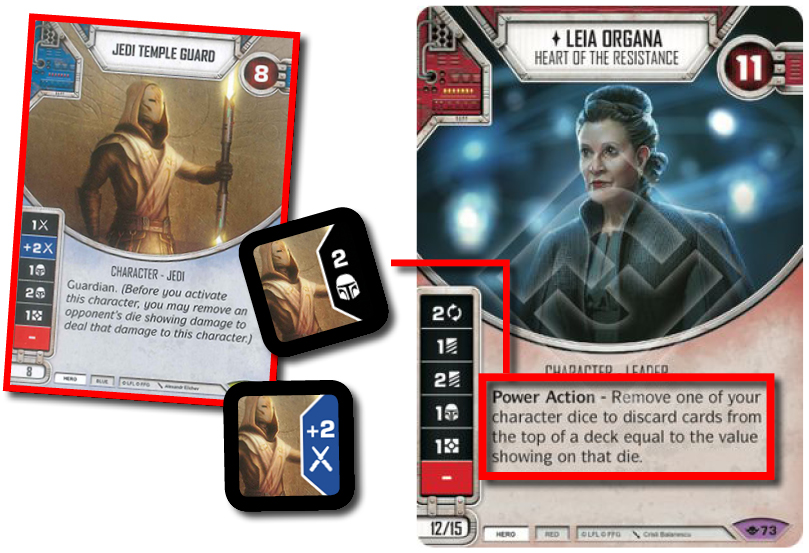 "Basicaly the deck works very smoothly. All three characters fit well together. Leia is a very potent mill character. She has strong die sides and the Power Action can be used quite effectively with the Temple Guard's 2 Shield or 2 Melee sides. Like in the standard Millionaires build, Anakin does a great job with his podracer and provides some resources."

Leia Organa, although powerful in her own right, does NOT add the over all consistency of the beloved Jedi Master, but can nonetheless be a consistent milling threat with her Power Action, two Discard sides and the 2 Focus side.
4. CARD CHOICES:

The downside of just having 1 Yellow character, and with just 7 health, is that you can not reliably use Second Chance, Entangle, EASY PICKINGS and FRIENDS IN LOW PLACES as effectively as you could if you were running with Anakin AND Cassian. You could decide to play just one copy of Easy Pickings, but the cards are just really strong, and some, if not all, should definitely find their way into this deck. And because resources are much more scarce in this deck than if you were running Yoda, Entangle seems to be the first card of the yellow mitigation cards that has to be trimmed from the deck.

On the other hand, getting access to Red cards opens up some interesting options like COMMANDO RAID, MEND and the inclusion of C-3PO (who used to be a staple in mill decks although in this particular version, Leia's Power Action almost fulfills the same role). Mend takes over some of the healing power that you would normally have gained from Second Chance, but is actually a bit more flexible as it works on all 3 characters.

"Commando Raid is one of the strongest possible plays in this deck and (if successfully played) will take away nearly all of your opponents options". My own playtesting just underscored Thomas' point and it's definitely a key card in the deck and you want to see them in your hand early on and should be one of your mulligan targets!

C-3PO is actually "a good backup plan if you lose Leia early, because Commando Raid works on his die too“. He provides many more possibilities like milling with Force Meditation or using the full potential of Anakin Skywalker's Podracer when Anakin himself gets defeated early in the game. Or simply using the C-3PO Focus side to focus Leia's die to the 2 Discard side once again opening up for Commando Raid plays.

Thomas Roither notes on the deck that the "Primary goal of this deck is to quickly attack your opponent's hand, either using Anakin Skywalker's Podracer or a fast Leia roll out into Commando Raid". 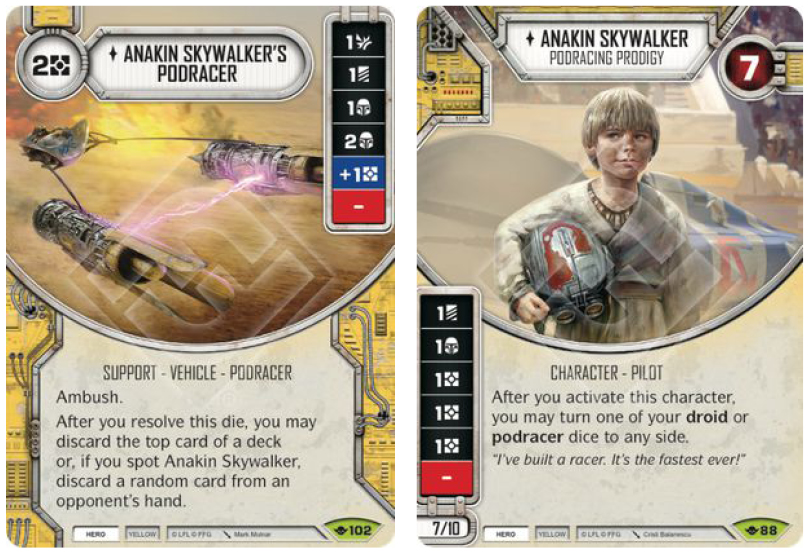 The synergy between Anakin Skywalker and his Podracer is obvious to everyone, and it's in itself a powerful mill engine that you'll be aiming to setting up as fast as possible! The consistent mill synergy here is just too good to miss out on!

You do not have the constant resource production of Yoda, and SCRAP HEAP can help you out with your resource management. As long as you have a Podracer or Force Meditation down it should be fairly easy to ensure.

"I found IMPULSIVE very helpful to Ambush setup Leia's 2 Discard side and boost it to 4 with Commando Raid"! It's a really powerful include because it does allow for a bit of flexibility as to how your rounds play out. Your milling options are a bit more limited than in the Millionares deck, which means you need to be able to spring more surprises.

"Many of my opponents were surprised by STRENGTH THROUGH WEAKNESS, which I can not comprehend/retrace, but ok“. It's not a cheap card, but milling 4 cards can be incredibly powerful and be just exactly what you need to steal the game away from an opponent.

"The rest of the deck is pretty standard for Hero Mill, and during my test games for the German Nationals, the deck worked fine against any kind of aggro decks. Unfortunately I am the only Mill player in my group, therefore I couldn't prep the mill match-up, which backfired on me during the tournament. It feels a little weak against Yoda/Cassian/Anakin and this match-up I had to face 3 times during the tournament“.

The advantage you have against other "slower" mill decks is the fact, that you can put very strong early pressure on your opponent's hand with Leia. So try to roll her out early and let them mitigate your dice or let them feel the pain of losing most of their hand.
5. BATTLEFIELD:

"Even if OTAH GUNGA only heals one character as opposed to Medical Center which heals two, Otah Gunga allows you to keep control of the battlefield. Having the first action can be very important concerning my game plan [attacking the opponents hand early in the round]. If I win the battlefield roll, I usually take my own".
6. MULLIGAN:

"4-2 in swiss, proceeding into the Top16 cut, where I had to play Millionaires again, this time losing 1-2 in the best of three. Nevertheless I am very satisfied with the deck and will play it again".
Top16: Yoda/Cassian/Anakin: Loss