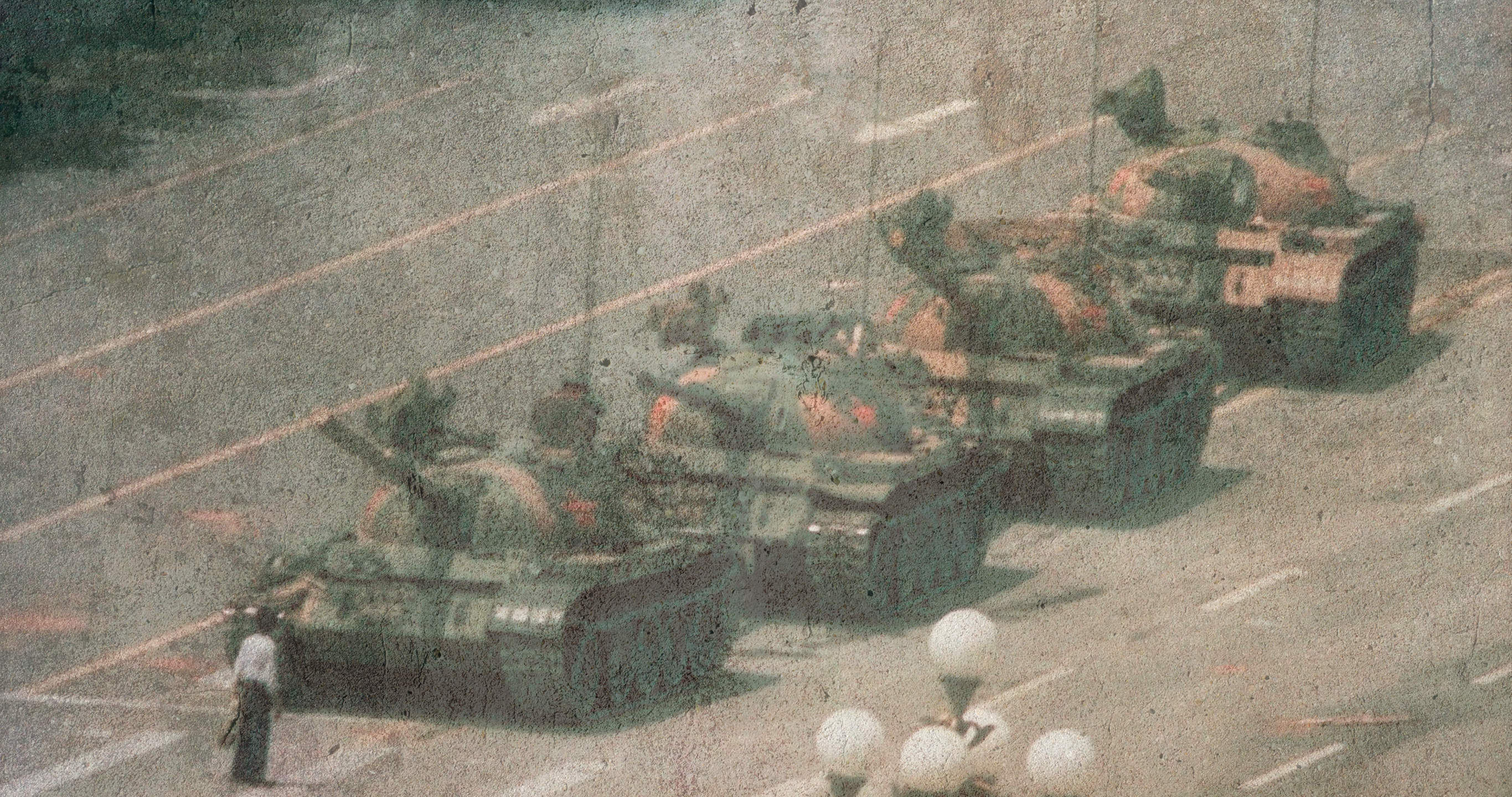 1. STRATEGY AND TACTICS:This is not going to be an article about tactics and strategy, that one is still in the works, but I am going to use the terms (the definitions are pretty standard though) in this article to describe some of the changes that has taken place in Star Wars Destiny over the course of the last 2 years since the game was first released.

By STRATEGY, I refer to your approach to the game all the way from your general deck construction to how you specifically approach each game. In the specific it can then include elements such as identifying which of your opponent's characters is the biggest threat, by which means do they intend to defeat you, how will they - your opponents - facilitate it (THEIR strategy) and how will you counter it. It also includes mulligan and resource strategies. Roughly speaking, Strategy is determined prior to and in the beginning of a game.

Whereas by TACTICS, I refer to how you change and adapt throughout a game. You might have envisioned and created the framework for a certain strategic approach to a game, but even the best laid plans needs re-adaption due to varying circumstances that are not fully in your hands: The variance of dice rolls, the tactical choices of your opponent, elements within the game (i.e. closing in on the time limit of a game), etc. Tactics can then be said, approximated, to be determined during a game.

None of this is set in stone, and while each game is different so are the definitions that can be used to describe the strategic and tactical choices of an individual player.
2. A WALK DOWN MEMORY LANE:There was a time when 2 character aggro decks was the bread and butter of Star Wars Destiny. It was the time of Jango/Veers, Vader/Raider, Han/Rey and Luke/Ackbar. Just imagine, Jango Fett and General Veers, a flimsy 19hp character team packing just 6 mitigation cards and still rocking it ... That's how much Destiny has changed. Remember that when you say that Destiny has become boring. Sure, Yoda and Snoke are not the nicest guys in the pack, but they do offer several strands of play and counter plays. Jango/Veers was, in lack of a better word, pretty BORING! 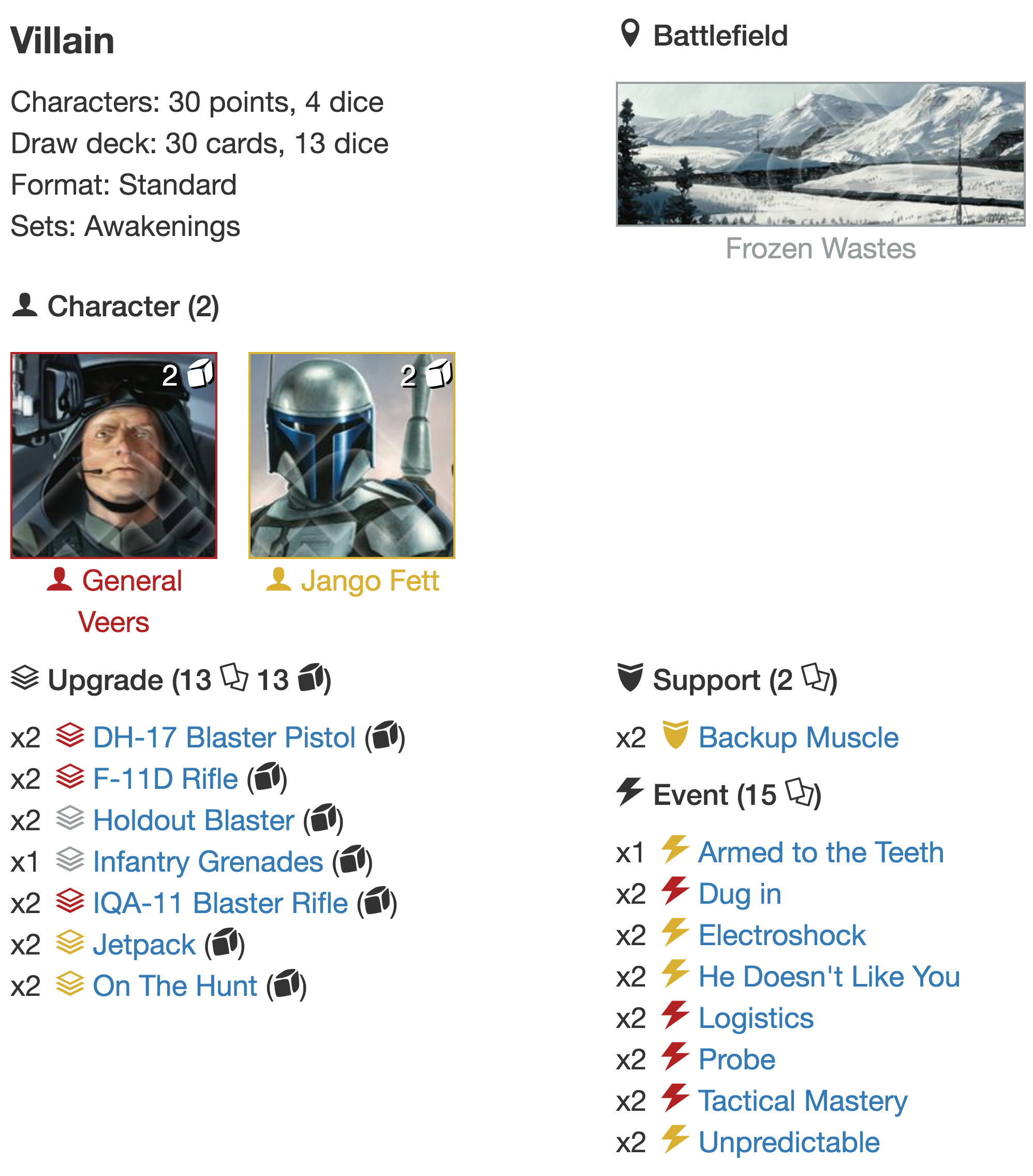 Then imagine the mirror match, which happened regularly because the pairing was as popular as a cold glass of beer on a hot summer day!

It was really the same story with both Vader/Raider and Luke/Ackbar, although in all honesty they did open the possibilities of the game, strategically and tactically, whereas aforementioned Jango/Veers were really void of any strategic complexity. Hey, I still played the deck ... I'm no saint.

And speaking of action cheating - this was also the era of Han1/Rey1, just in case you forgot.

Just for sake of the fun of it, try and take the character pairing for a spin today! Even if you were to try and adapt the deck to the current meta it will perform horribly! Why? Because Destiny is more complex, not just due to the size of the card pool, but because new abilities and new interactions constantly change the nature of our strategic and tactical possibilities.

The early Spirit of Rebellion meta didn't offer a lot of improvement as one of the first lists to dominate that meta was Poe1/Maz, and although it was the first list to finally field vehicles as an integral part of the game plan it's mostly laughable. Imagine the design team realising that this was the best shot at an actual support based list! It did include 6 vehicles after all. Well ... we all know that all of that was a scam.

SPOILER ALERT: This deck is really not about playing vehicles. At all. 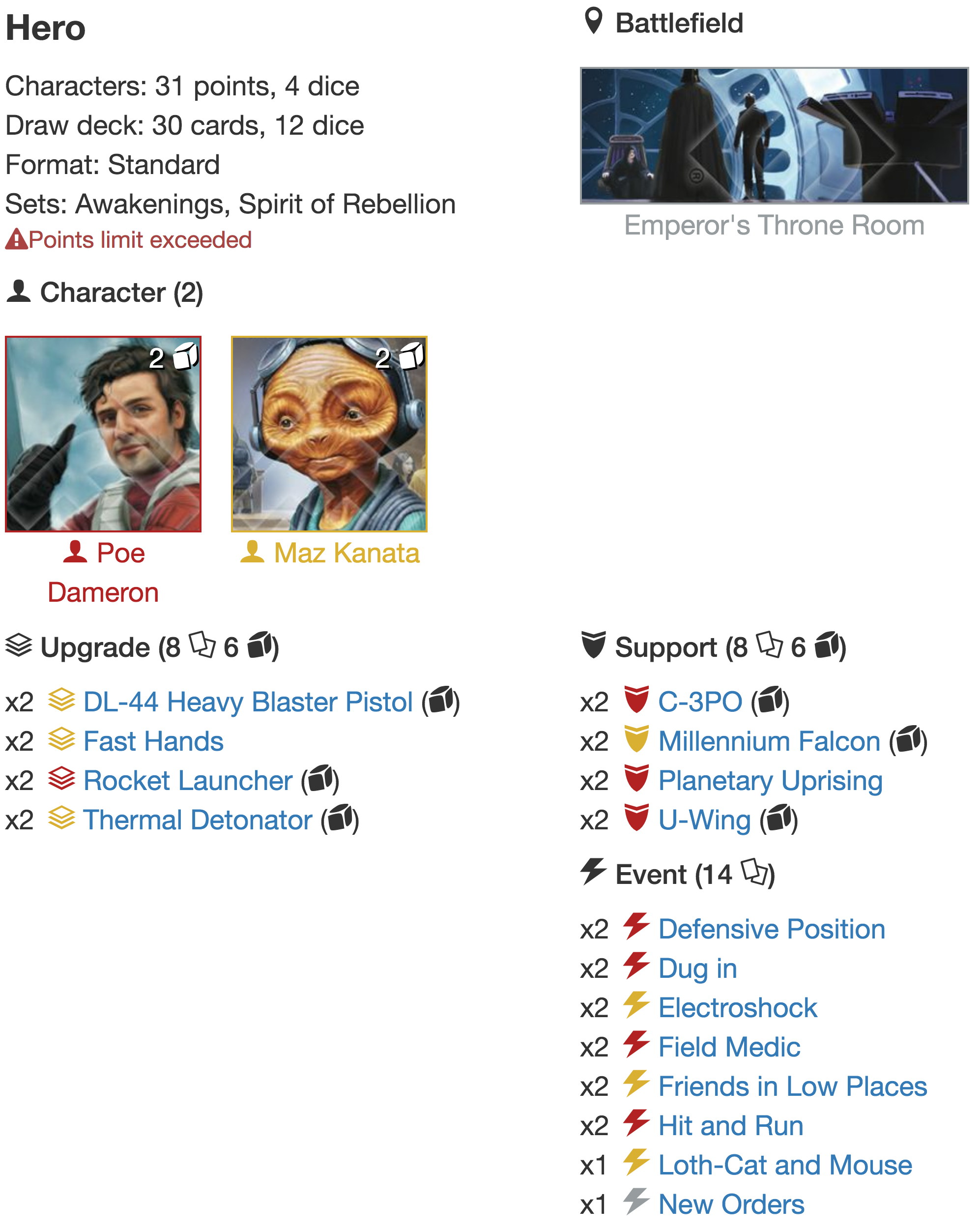 Poe1/Maz, similar to Jango/Veers, used very little mitigation although more than the latter deck, with 9 cards in total counting both Field Medic and Dug In as mitigation cards (5 without those). The strategy of the deck was as simple as the tactical choices involved. Kill off an opponent's character(s) as fast as possible. The kills were set up using either Hit and Run, Maz's Ability, The Battlefield claim or simply rolling Specials on Poe Dameron hoping that your opponent would have made the same strategic choice as you bringing little mitigation to interfere with your dice. 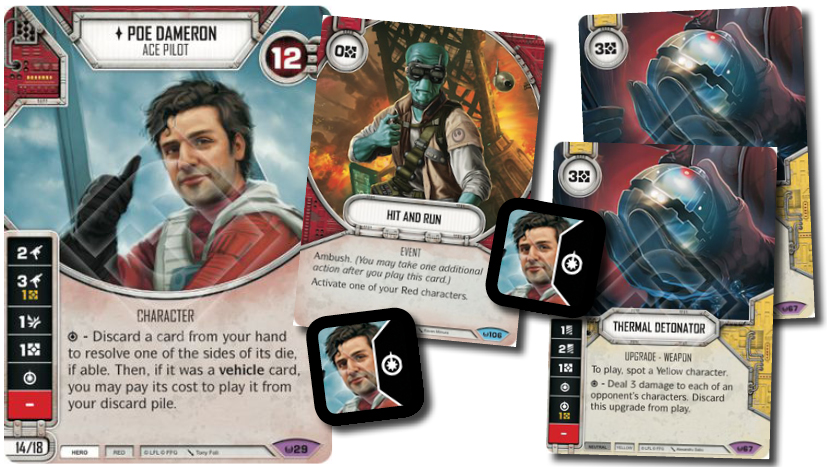 The FN/Unkar/FO deck was incredibly nasty, but it also wasn't particular interesting to play or play against. Although the strategic vision of the deck was more elaborate than its predecessors at the pinnacle at the meta, it was still limited and the tactical challenges of the deck similarly. Sure, math was involved, but when is it not in a game dealing with the probability of dice ... Btw. I also played this deck! 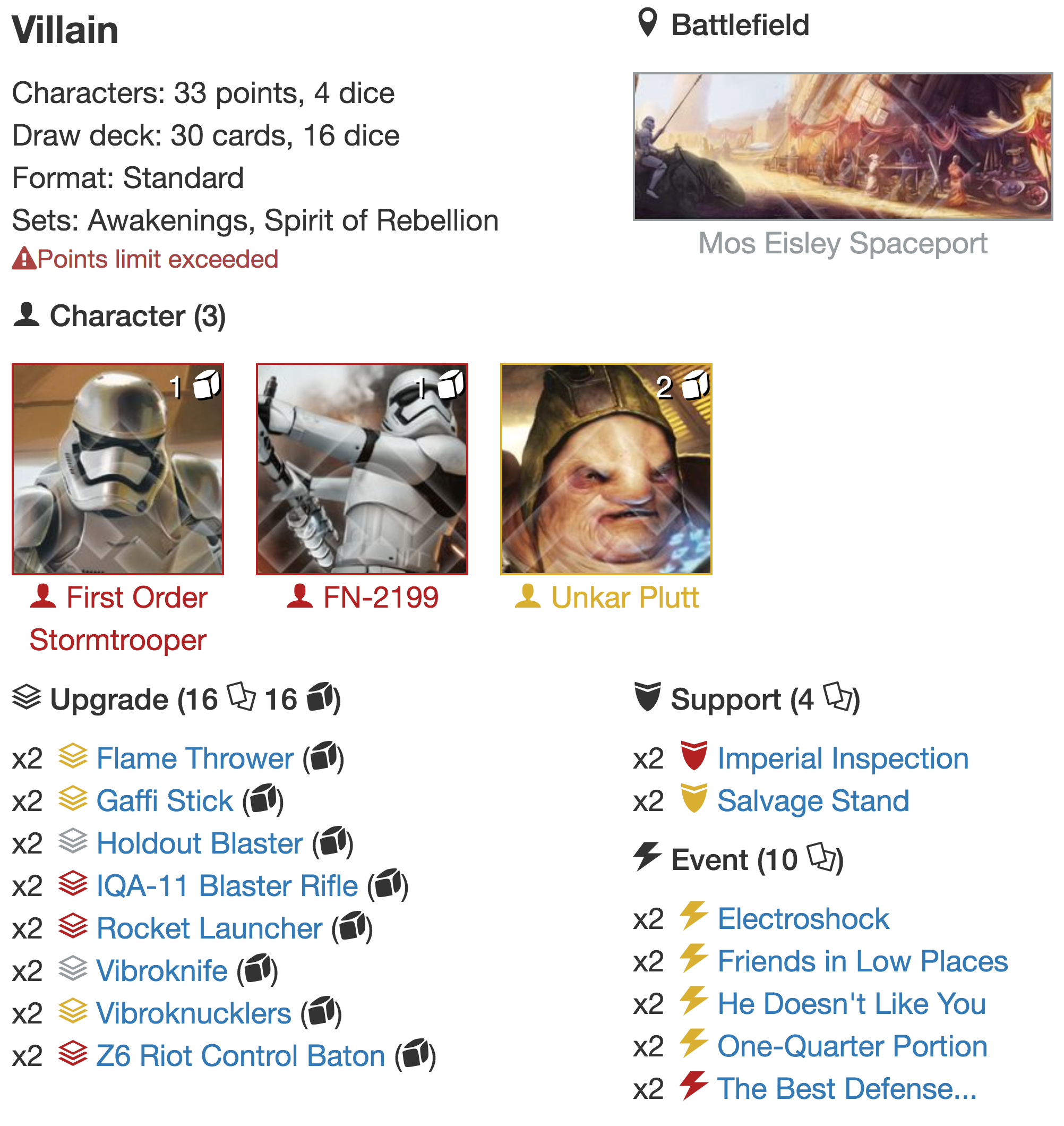 The power of FN-2199, who also ran wild in later metas partnering up with Kylo2, eventually lead to significant changes in the game design. Changing the "overwrite upgrade" (replace upgrade) stifled the power of FN (while Rey1 also played her small part in this change), but more importantly it led to changes that has not only improved the meta (I'll return to this claim), but also made the game much more competitive and attractive for those reveling in the depths of the strategic and tactical challenges of the game. 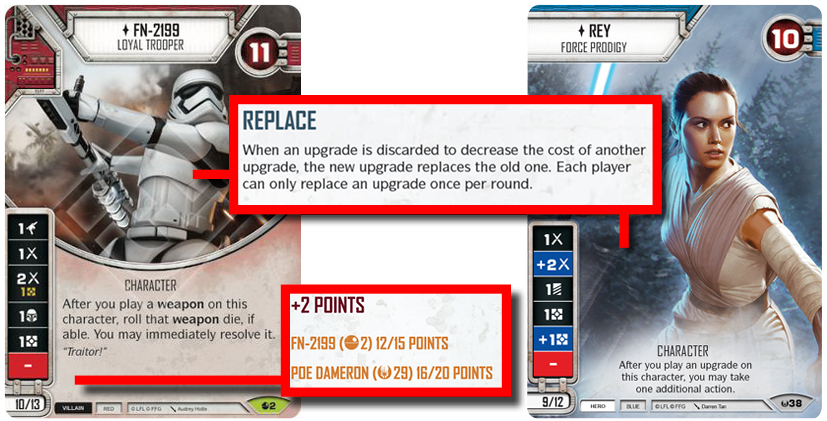 3. THE DEVIL'S ADVOCATE:
Let me make it absolutely clear that I don't think that Destiny WAS bad nor do I think the game is BAD. It's not even a better game, but Destiny anno late 2018 is definitely a game which requires more than than Destiny anno late 2016 did. I don't even think the meta was BAD in 2016, but I do think that the changes to the game throughout the course of its development has made it a more challenging and interesting game to play.

Let me for a second play the Devil's Advocate here, and say that there will always be characters that will be disliked by players - for many different reasons. Some because they are not in tune with our perception of the thematic focus of the game, i.e. Poe1, others because they are limiting to the game as they are either considered so strong and inherently powerful that they become MUST includes in a deck that wants to do well in a competitive setting, i.e. Yoda or Snoke, and some because they abuse or are threatening the basic mechanics of the game, i.e. FN-2199 or Rey1. And while I think that a balance within the game should always be maintained, either proactively through pure game design, preferably, or reactively through corrections (bans and erratas), I also think we should thread carefully before changing elements that (at least potentially) contributes to making the game more challenging. Sure, they might be "challenging" because they are outright broken and disruptive for the game design itself, but it might also be that they are "challenging" because they actually change how the game can be played. They simply offer new strategies and tactical choices.

One of the decks that became one of the most hated decks in the Legacies meta was the BrOTK (Blue Red One Turn Kill) and was popularised by none other than Joe Colon aka HonestlySarcastc of the Hyperloops. As any other OTK deck it abused draw mechanisms and the abilities of a few cards in the game: 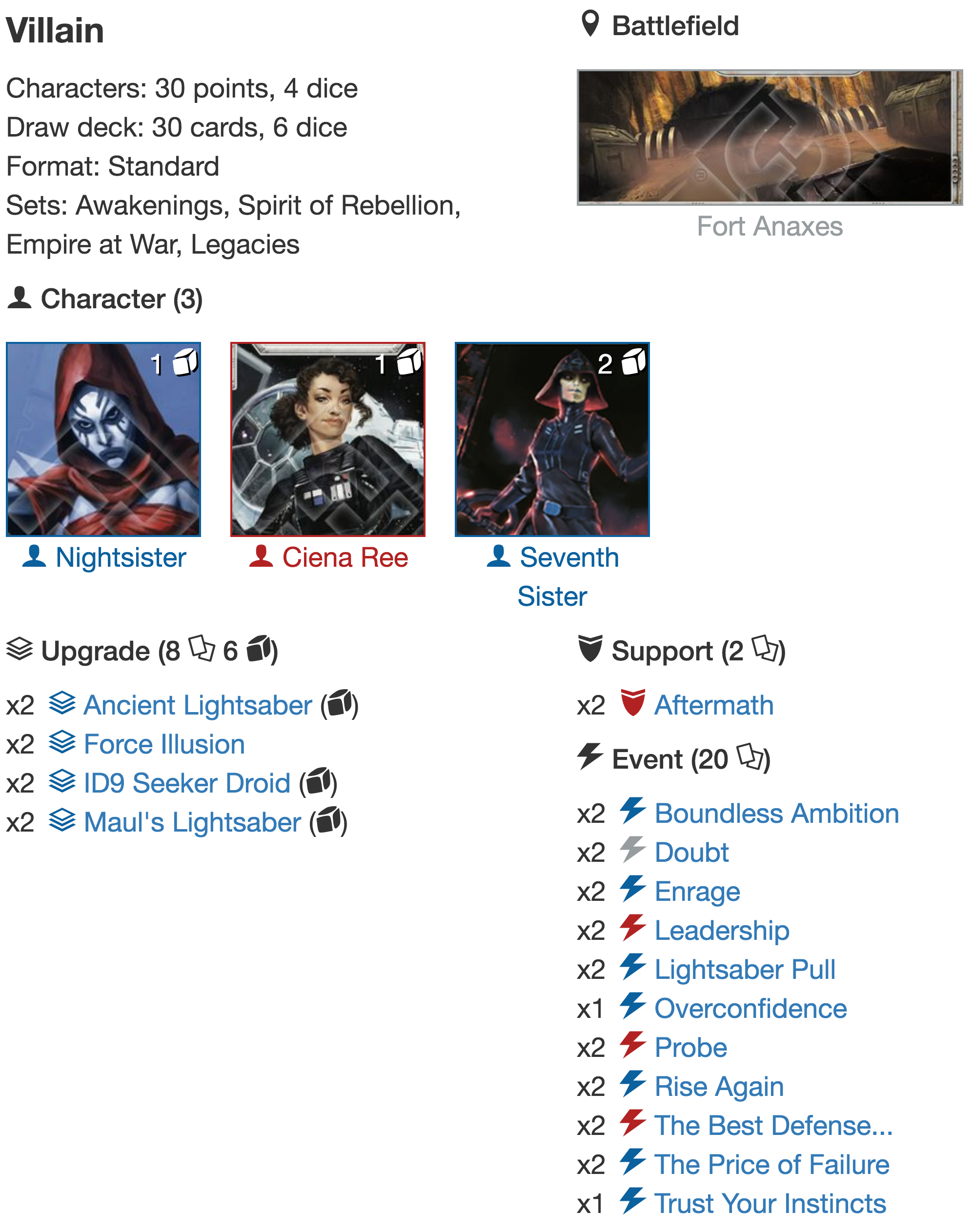 Lots of players damned the day that they ever laid eyes on the deck and even more threatened to leave the game due to its short lived dominance. It was eventually dumped out of the top flight because Maul's Lightsaber, which was integral to the strategy of the deck, was errata'ed and because the meta found a way: 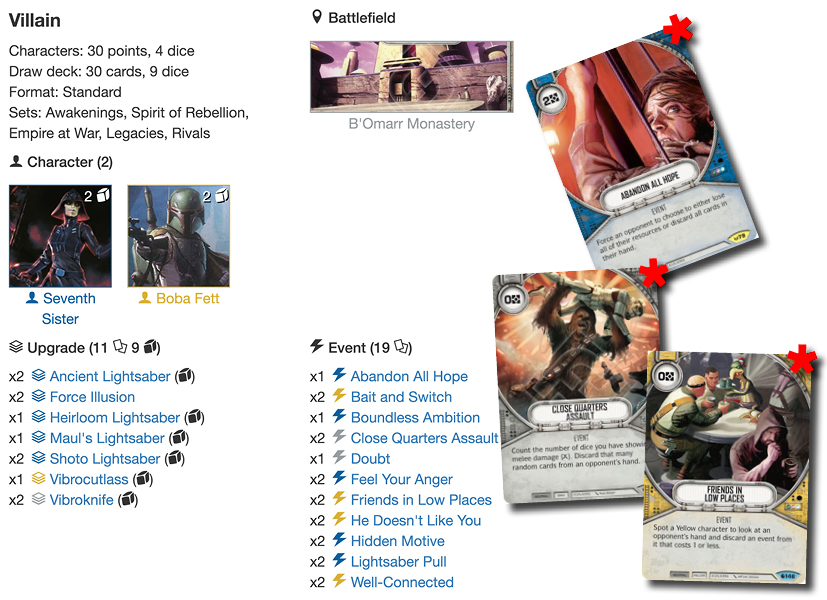 Boba/Seventh was a deck designed to take down the BrOTK, and while it might have been successful in large to the aforementioned Maul's Lightsaber errata, it was also aided by a number of strategic choices in the deck including hate cards like Abandon All Hope, Close Quarters Assault and Friends in Low Places, designed to draw out the cards that made the BrOTK so powerful, i.e. Boundless Ambition, Price of Failure and Leadership. Without consistently playing those cards the powerhouse BrOTK looked pretty darn ordinary!

That change in turn lead to the rise of other decks that could do well in a meta not terrorised by the threat of having all your relatively low health characters killed off in one or two swift turns. Thanks to Boba/Seventh the meta made space for Rey2/Aayla, Drive-by-Shooting and Kylo2/Anakin - all of which made quite a splash at Worlds 2018, squeezing into top4, just 2 months after players en masse had said that BrOTK had ruined the game forever and ever.

But that's of course ancient history ... at the beginning of the Way of the Force meta the game was finally broken and the best deck was discovered! It changed everything and ruined people's lives, while Destiny players everywhere realised that the HOLY GRAIL had finally been found, when Andrew Cox won the North American Championship 2018 at Gen Con with the Millionaires deck: 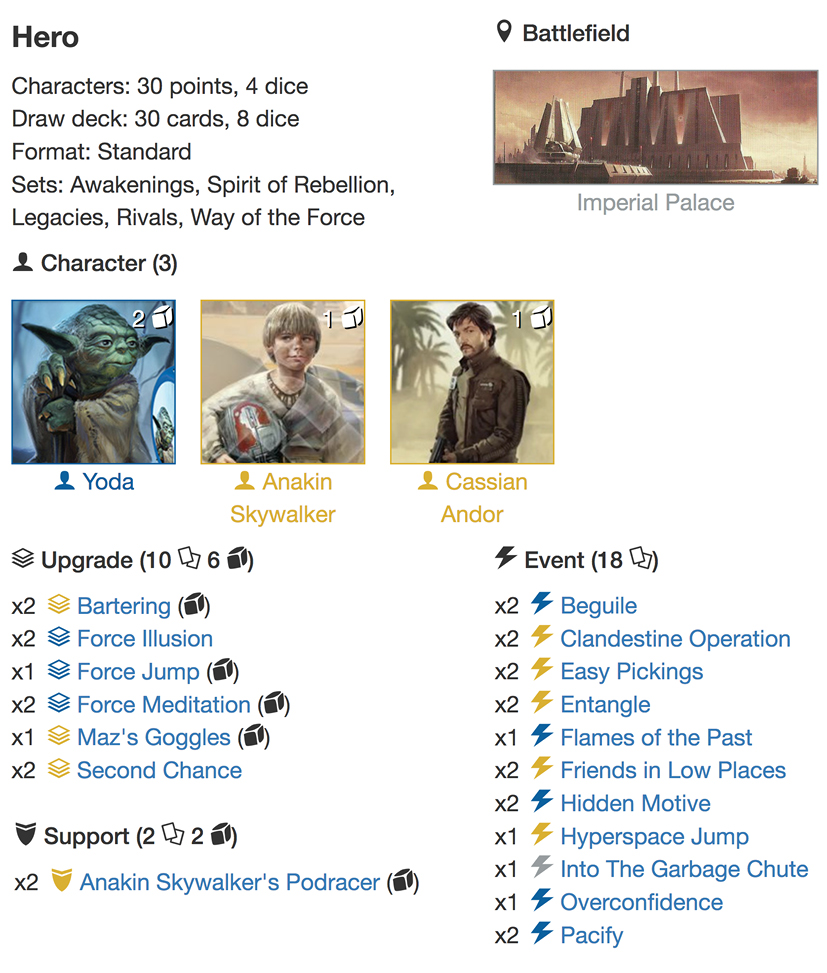 Well ... as it turned out, our search for the mathematically best deck hadn't ended ... YET! The cure to the bane that was the 3wide hero mill deck turned out to be Villain vehicles. Can you imagine!

MY POINT IS ...
When were these happy days in Star Wars Destiny where we all got what we deserved and everything was good and equal.

It seems to be me as if we have for the vast majority of the 2 years the game has been around dealt with what often seemed as an overwhelming dominance, but as we know, it takes just a few brave individuals ... 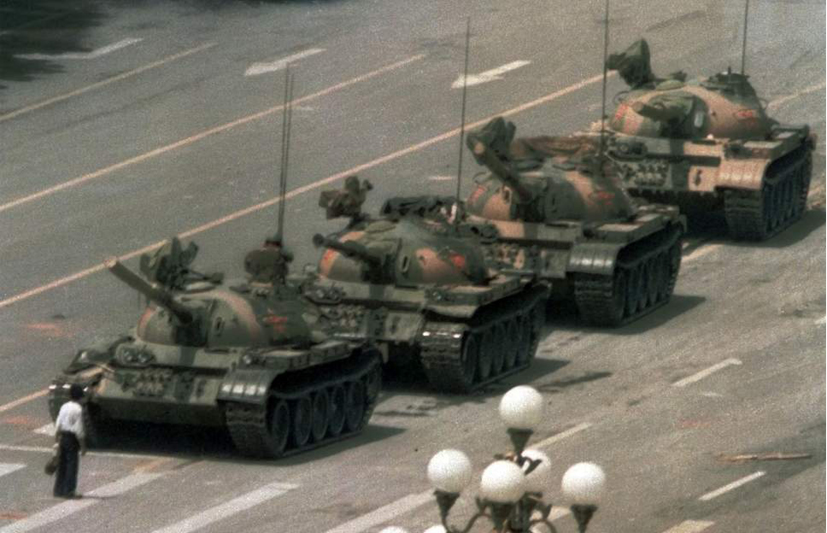 Things change ... albeit sometimes slowly!
4. TANK MAN! THINGS CHANGE ...
Most of the decks that do well in the current meta are decks that reward a high skill level and offers several strategic and tactical avenues. Take a look at the deck that was brought to US Nationals 2018 by Luke Magnuson of The Destiny Council: 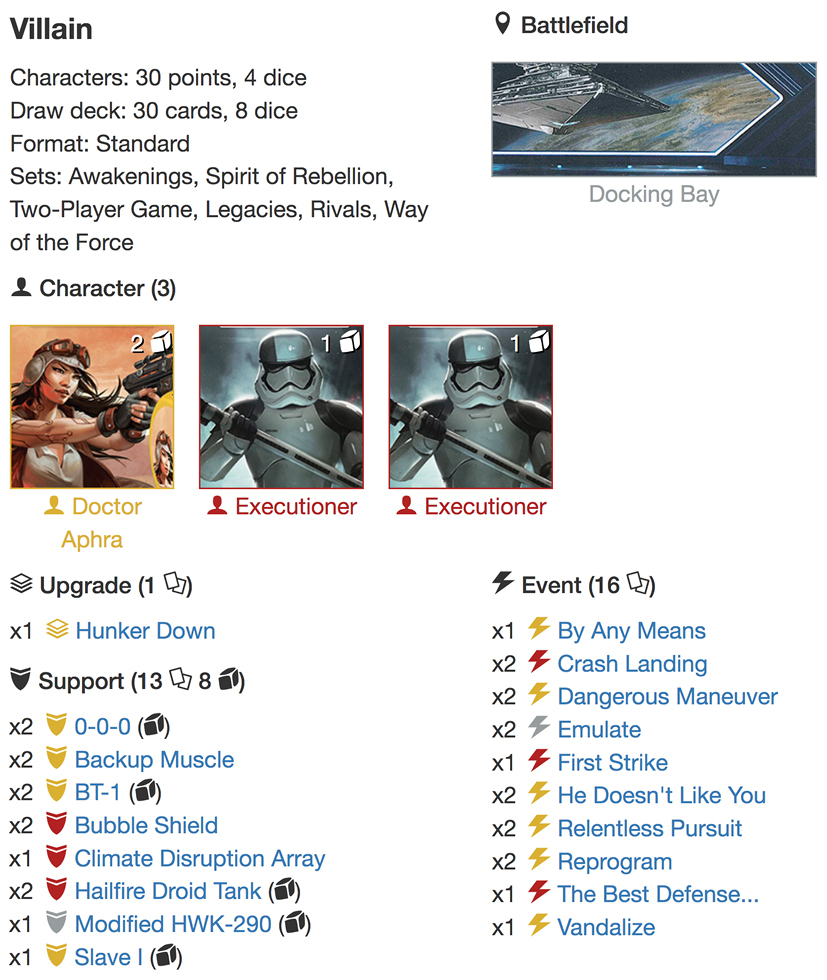 It is obvious that this is not your average "kamikaze" Indirect damage submarine deck, but it is full of choices to make. There are so many plays in the deck that can be synergised, and because the plays are manifold your opponent will have a difficult time figuring out how to counter them.

Doctor Aphra might win popularity contests nowadays, but just a couple of months ago people were struggling to make her work ... Things change!

People were complaining at the end of the Legacies meta on how incredibly oppressive Kylo Ren were for the game because he was so punishing for monocoloured decks, now players almost sigh of relief when realising they are sitting across from a Kylo/Pryce deck, which was not long ago hated on ... because things change!

I'm not saying that this game cannot improve, but sometimes improvement comes from us, the players, and not as communiques from the design team. 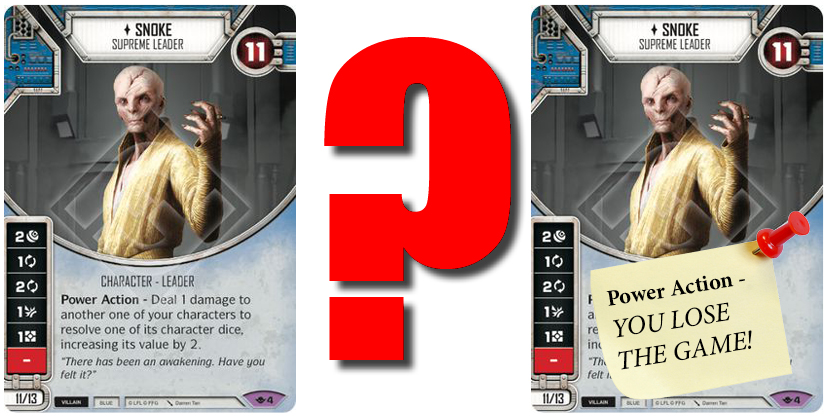 I believe the meta is quite healthy, and as we prepare to wrap up the Nationals season in Europe, I'm looking forward to the next Tank Man who will defiantly stand in front of the armored columns of Snokes saying: ENOUGH!
And sometimes our perception of reality is not exactly what reality is like (it actually rarely is). You might have taken some nasty loses against Snoke, Yoda or whoever slugs it out in your meta, but you could be on track to beat it!