A. IS IT CHEATING:
Written by CLAUS STAAL

Yesterday, I received a notification on potential infractions made in a Prime Championship game in the UK. The game was streamed and I was asked my opinion on it. I immediately reviewed the footage and felt absolutely terrible. It's also not easy to write this piece, but I don't want to sit on the information doing nothing.

The game in question involves a player (I know the name of the player in question, but have anonymised it in the article - in the documentation below named PLAYER), playing Chopper Droids, and his opponent playing ReyLo. All the video footage images links to the uploaded video with time stamps (just click the image). As I go through the infractions, I'll be evaluating them. I'm not passing moral judgements nor will I comment on that part of it.

NOTE: FFG is currently looking into this particular incident, although not at my behest.
1. ILLEGAL DECK:It's a bit difficult to judge (in the beginning) without piecing various parts together, but it would seem as if the player sets aside a SUDDEN IMPACT in the beginning of the game. The card, which is placed in front of him (see the picture below), is taken from the deck and then placed in the container. This could simply be a matter of two or more decks shuffled together, but ... 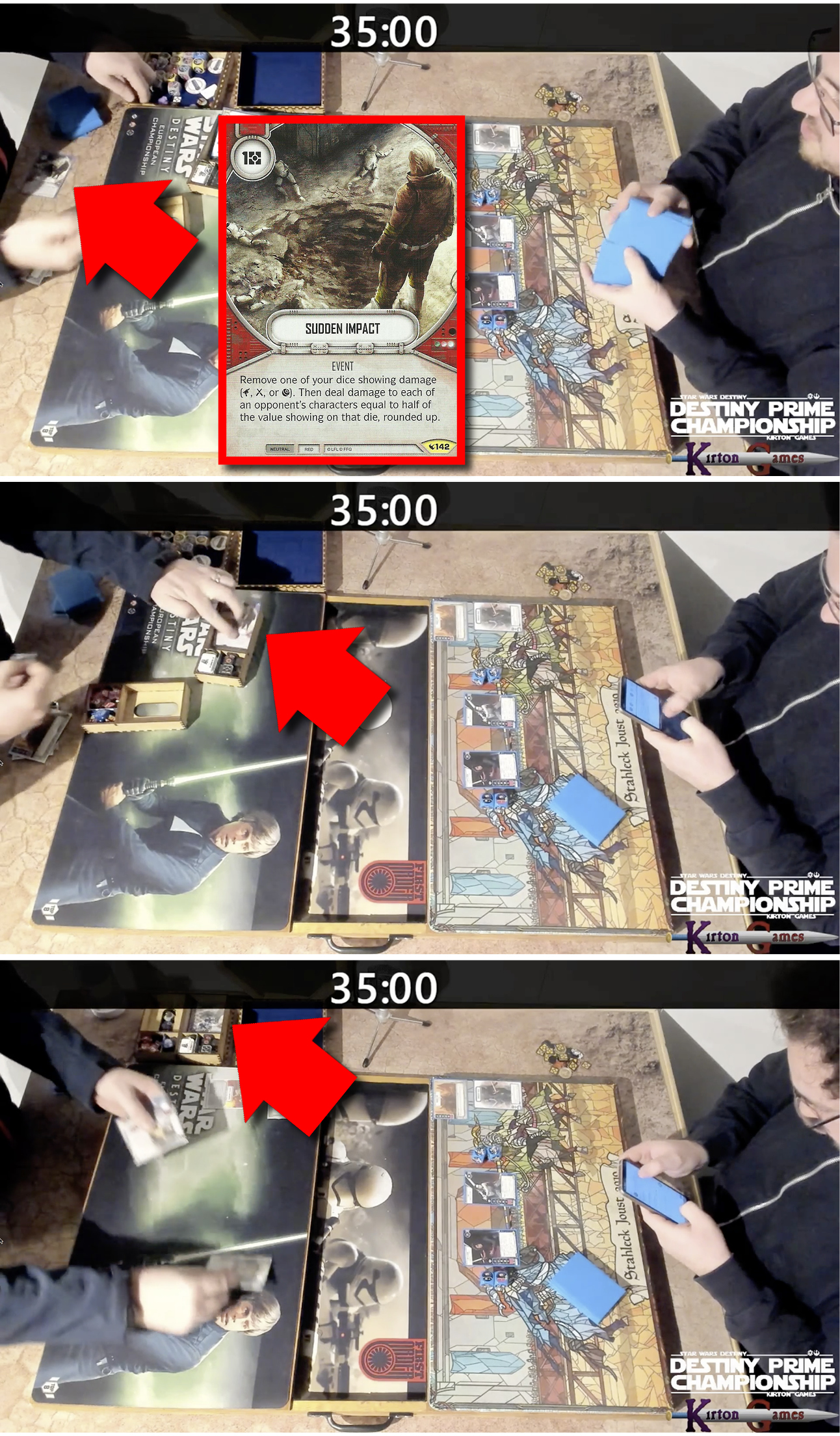 When looking through his separation of cards in the beginning of the video, you can count the remaining cards after the SUDDEN IMPACT is transferred from the table to the card/dice box. The stacks look like this: 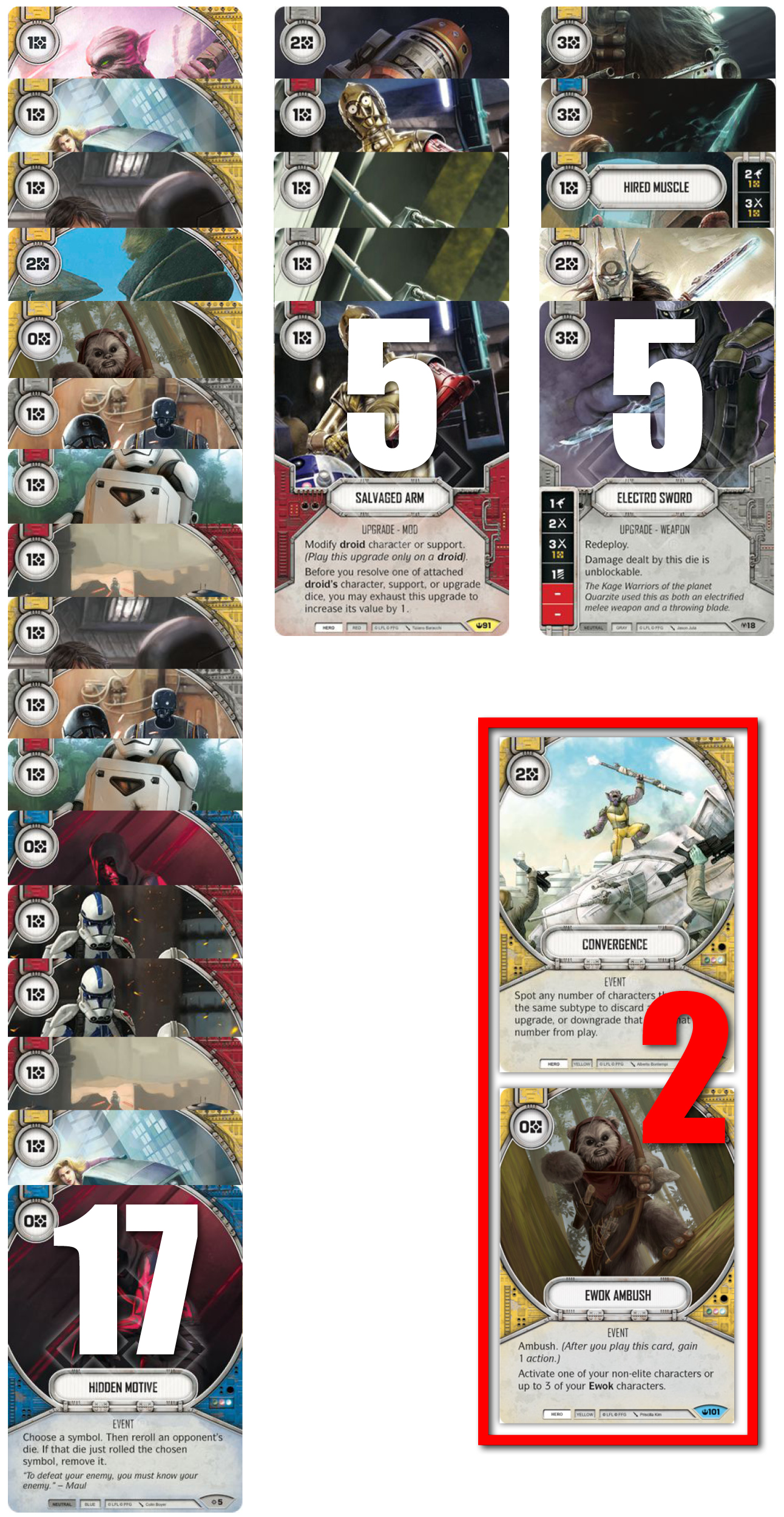 That stacks only tally a total of 27 cards (here transcribed):

That leaves 3 cards missing, but it would appear that 2 of those cards (Convergence and Ewok Ambush) are set aside in front of the player and later added to the deck for a total of 29 cards! 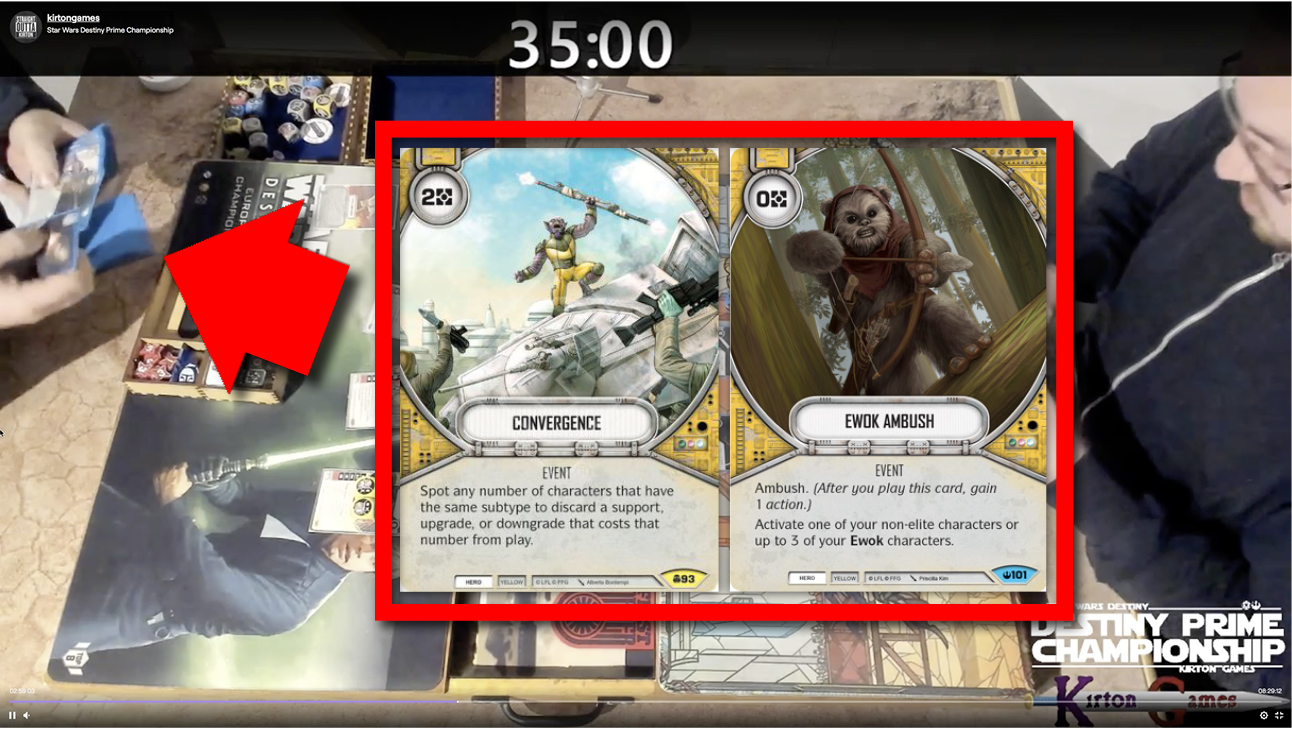 It's obvious at this point that the deck is currently an illegal deck, which can only be remedied by the (missing) card being added before the deck is being shuffled, cut and a hand dealt. There appears to be no evidence to support that it happened. This infraction, according to the FFG Floor Rules, should lead to one of the following penalties:

2. THE SHUFFLE:While the shuffle performed by the player is not against the rules per se, it is as a minimum pretty sloppy. The Tournament Regulations 2.2 state that "Each player shuffles their deck thoroughly and presents it to their opponent. The opponent may shuffle and cut the deck if desired. After the opponent has had a chance to shuffle the deck, each player places his or her deck within easy reach in their play area and draws five cards from it", and while it does not state which method must be used, it does indicate "shuffles their deck thoroughly". 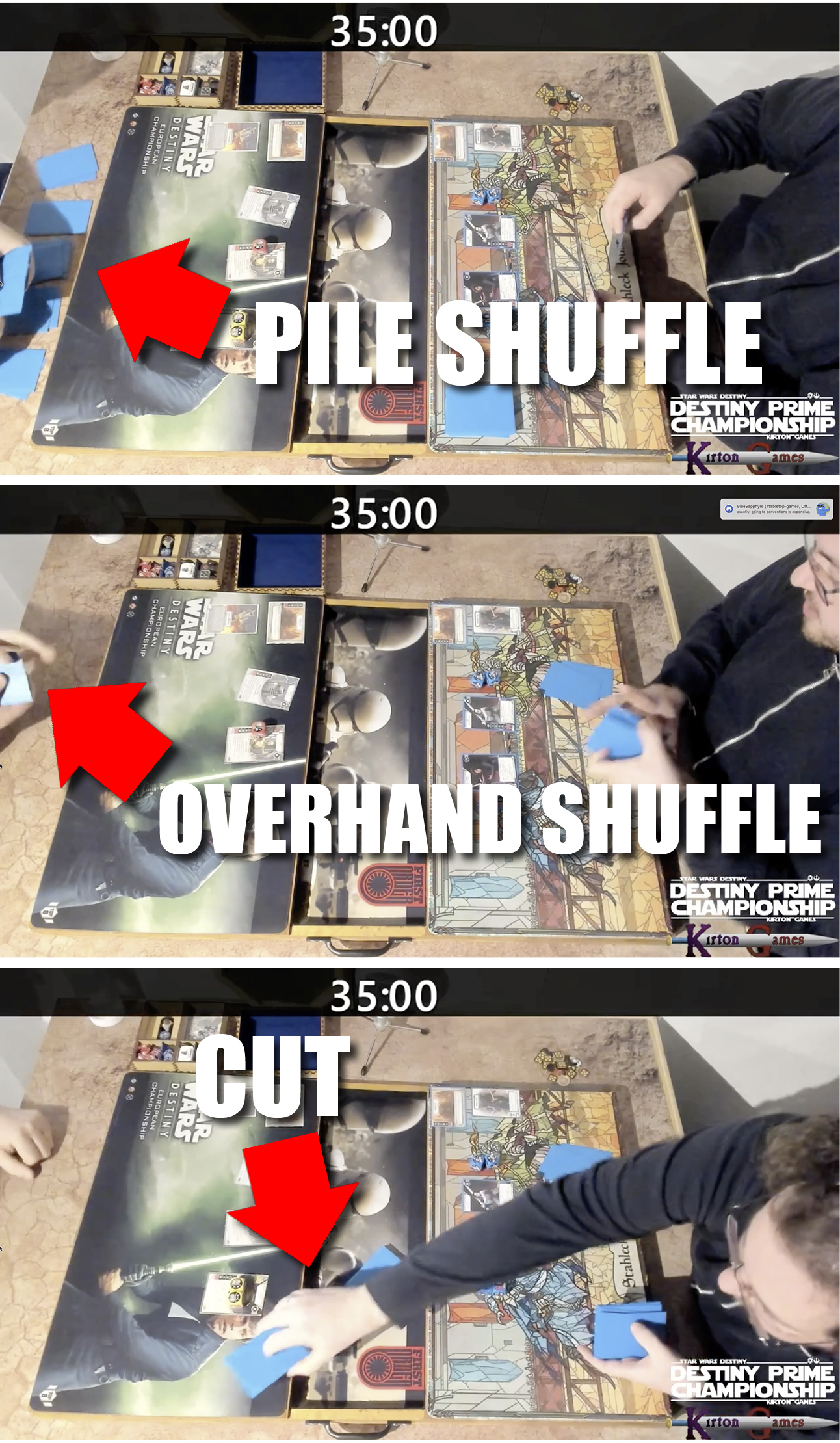 The player uses a (1) PILE SHUFFLE (separating cards into 5 different piles), followed by what appears to be a single (2) OVERHAND SHUFFLE. But as I've looked at the video footage again, the overhand shuffle doesn't actually seem to take place. I could be wrong on this, and will definitely offer the benefit of the doubt here. Finally, the deck is presented to the player's opponent, who (3) CUTS the deck approximately in half.

The main problem with the pile shuffle is that it doesn't randomise cards at all, it only ensures that the stacked cards are not next to the cards in the original pile (deck). It's generally used only to count that you have the right amount of cards, and if you look carefully you can see that in the second to last round of pile shuffle the fourth pile does not have a card placed on it. The piles are not of even size. There's just 29 cards in the deck. According to the FFG Floor Rules, there's not an infraction here, just sloppy play. His opponent, who could shuffle the cards - if he had wanted - and cut the deck, which he did, has plenty of possibility of interaction.
3. THE CARD SWAP?
This particular incident is the gravest of the instances I've seen in this particular game, and involves a card swap between hand and deck, that can be summarised as follows: 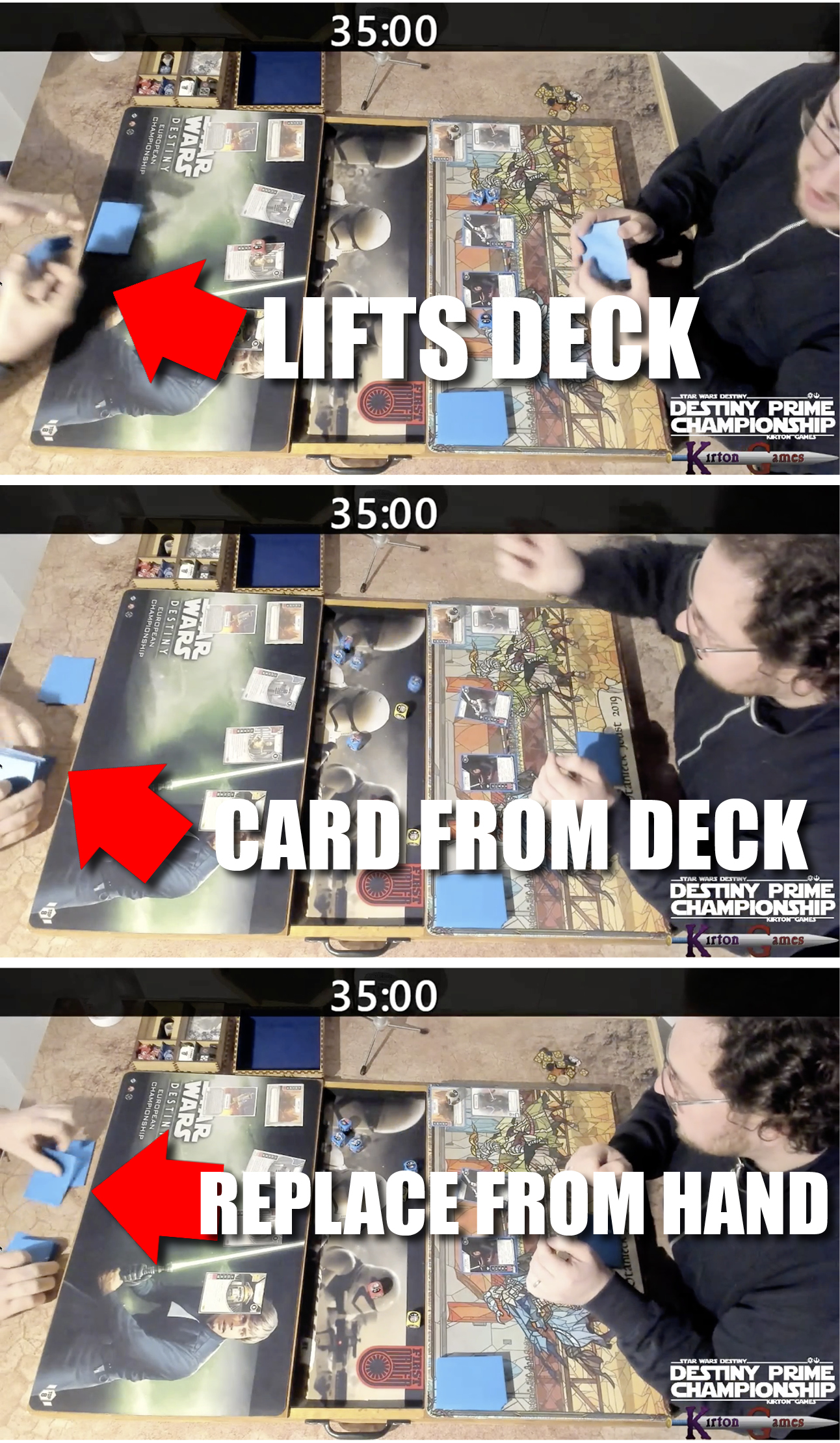 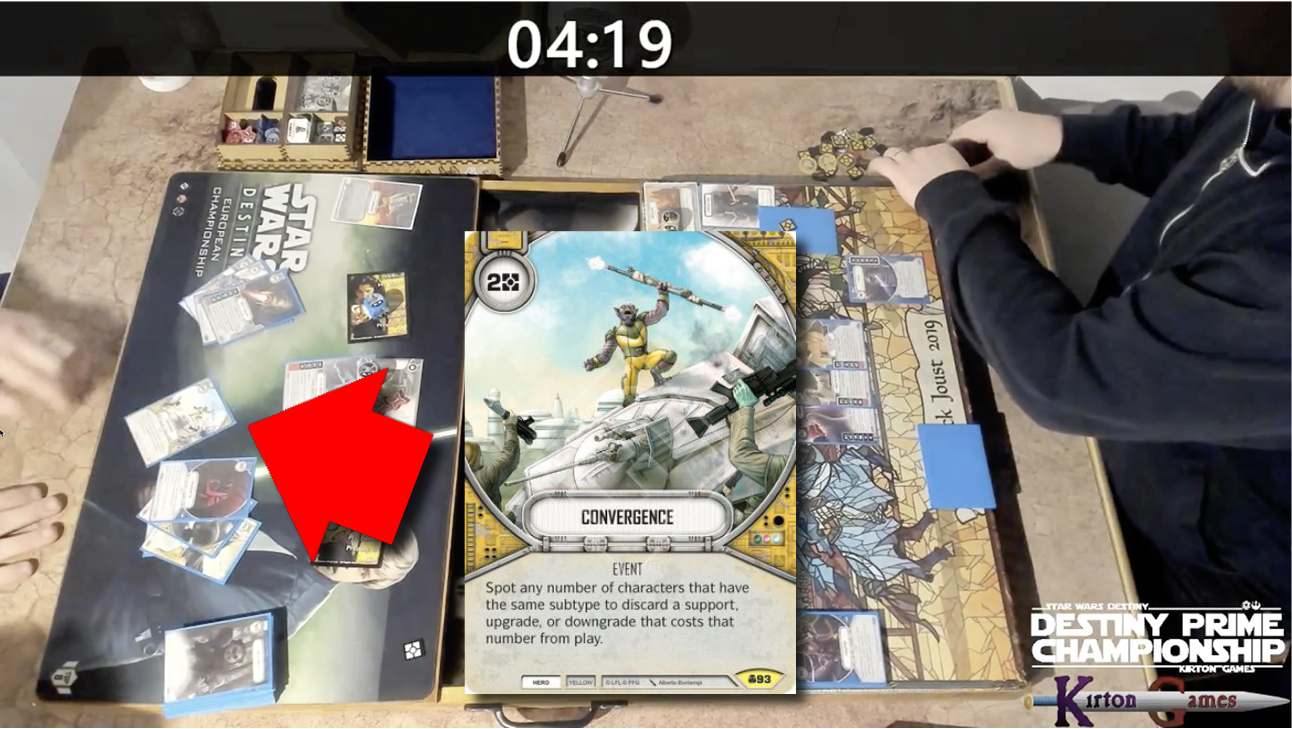 These infraction(s) are definitely the worst because it shows intent to deliberately change the boardstate, and once he plays the card (and there's no way of knowing which card it is) the boardstate cannot be reset.Is it cheating? And does it qualify for an immediate disqualification? According to the FFG Floor Rules it is ... swapping a known card for another known card between deck and hand, definitely counts as:

4. REVEALING CARDS:
The next sequence consists of two smaller (and similar) infractions, but because they appear to be deliberate and are repeated infractions, they could - and most likely would - be categorised as cheating. 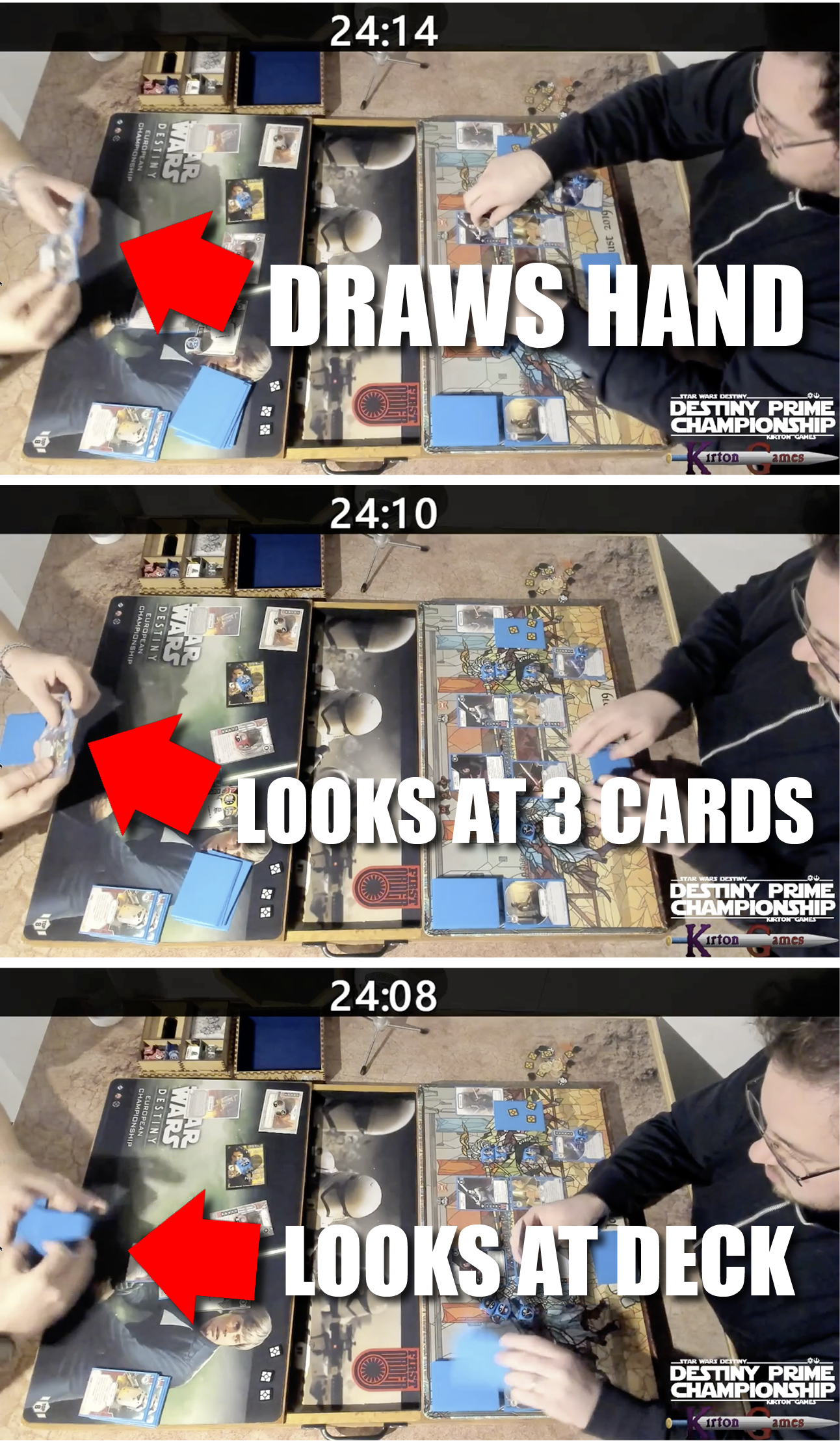 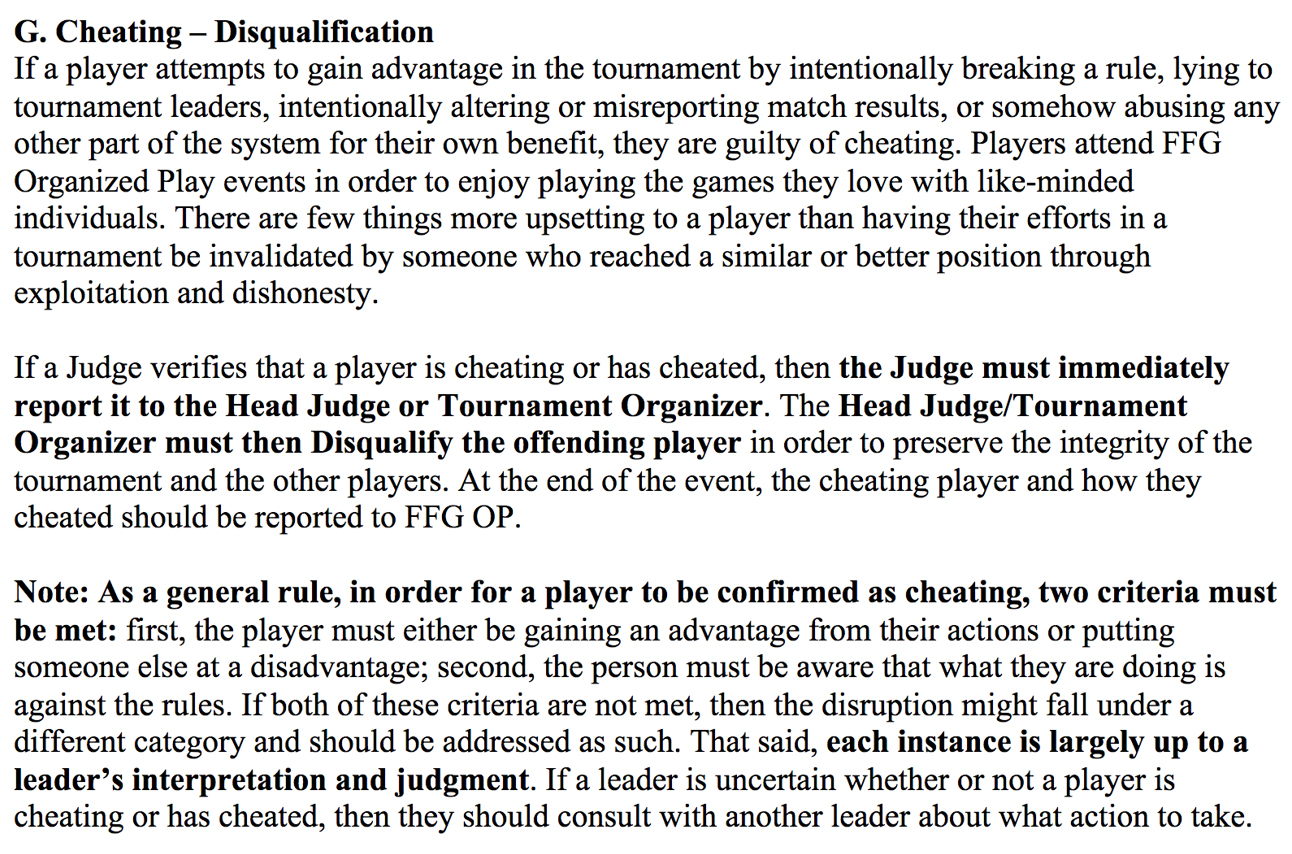 B. FINAL THOUGHTS:As I've been informed FFG is now looking into the case, and I don't feel like I need to add anything in regards to how FFG should treat this case. I have faith in that it will be treated fairly and in line with the letter and spirit of the rules. FFG has a number of punitive measures at their disposal, including temporary or permanent banning from various competitive events. I do not offer an opinion on what measures should be taken in this case.

HOWEVER, I do recommend that this does not turn into a witch-hunt! I've spoken to a number of players from the UK, who are all extremely saddened by the incident, and while cheating in any shape and form should NEVER be accepted, I also strongly believe that players who admit to their wrong-doings, and take responsibility, are deserving of a second chance. I hope you do too.

LINK TO THE FULL STREAM!