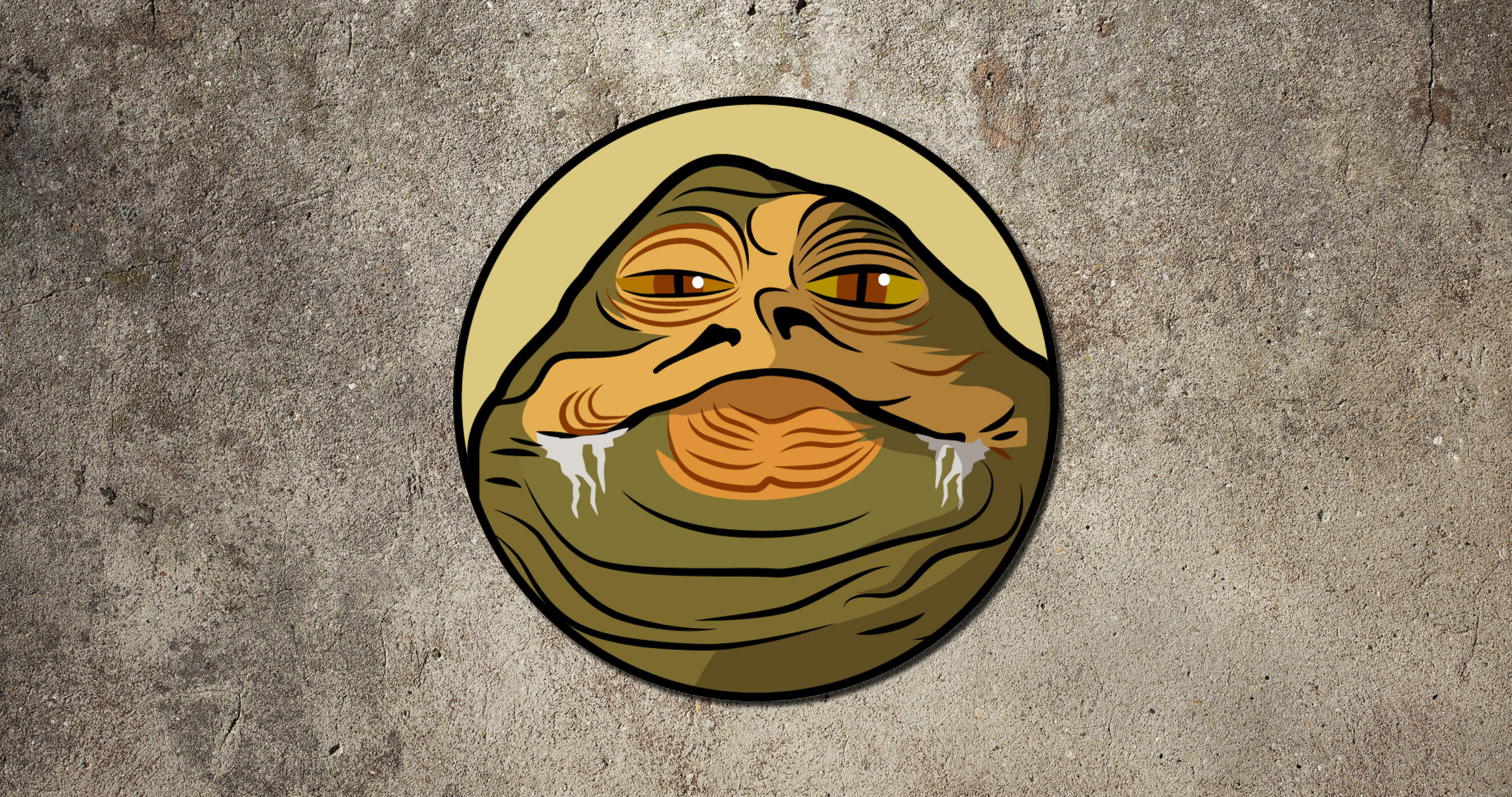 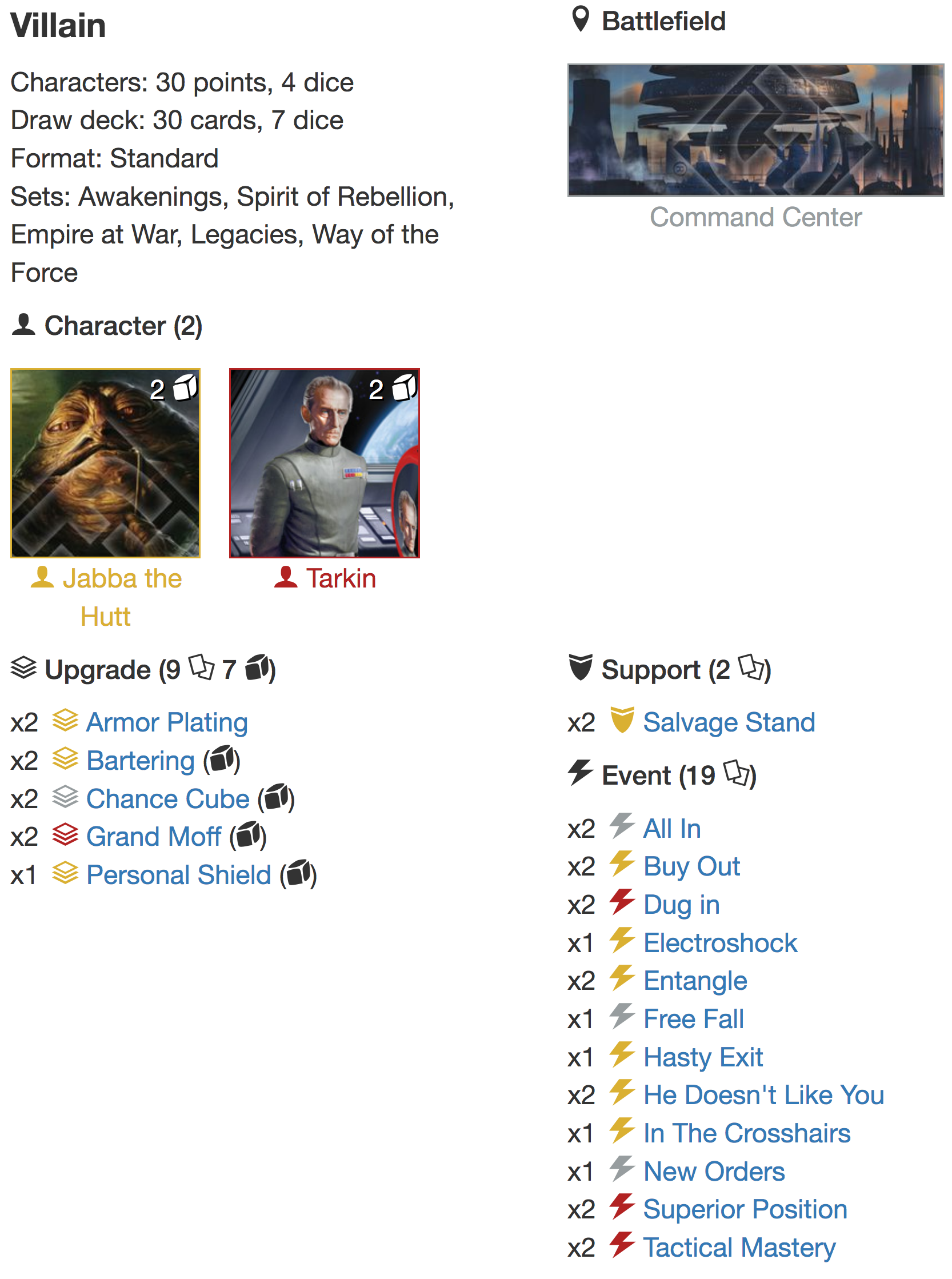 1. GENERAL COMMENTS:
If I was asked what deck is the most consistent and versatile deck in any given meta, Thrawn/Talzin would be my answer. But, the thing is I didn't have the time to learn all the new deck card lists, while I still wanted to play something with a similar feel to the consistency that Talzin brings to any deck.

The character team in this deck is not new to me having been playing slightly different versions since Governor Wilhuff Tarkin came in to my life. He was the perfect partner to that old faithful friend Jabba the Hutt (Awakenings). More Focus than we know what to do with plus both characters carrying that beautiful 2 Discard side.

As my friends like to point out, this deck is crap and back in the days where lightsaber battles were the rage they were right.  Life moves on and now it's a world of Planetary Bombardments and Podracer milling.  After the genius people at TheHyperloops created such a devastating deck in that 3 wide hero mill, I knew there would be a chance that Jabba could show there's life in the old dog yet.
2.CHARACTERS: 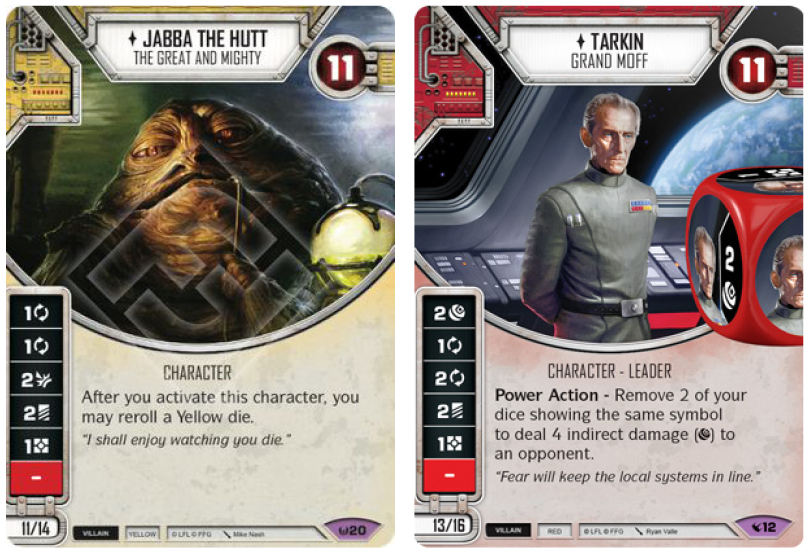 JABBA THE HUTT:
Apart from not causing your opponent damage, there's nothing else this vile gangster can't do. Focus, Focus, 2 Disrupt, 2 Discard and no one complains about a Resource. His ability is nothing to sneer at either, protecting yourself from the dreaded Easy Pickings and that extra chance of rolling the one side you need to wreck your opponent's turn.  If you're forced into playing on the defensive he can mess up those opponent's yellow 3 ranged sides also.

TARKIN:
Even with his Power Action not matching up with this style of deck, this Grand Moff is the perfect Mill machine. 3 sides all showing a value of 2 makes him amazing on the roll off which is the icing on the cake this deck needs. The 2 Focus allows for trick plays and his 2 Discard ensures he can finish out the game. Plus who else deserves the title of Grand Moff more so than Tarkin.

The 2 characters combined have such high probability of showing enough discard to wipe an opponents hand without a single upgrade playing into the aggro theme. I feel the need, the need for speed.
3. UPGRADES & SUPPORTS:

A very limited amount of upgrades, but as pointed out the characters themselves can achieve your primary goal.

CHANCE CUBE
Very simple, this upgrade is perfect for the deck with all that focus and is your primary mulligan target. You need it for a constant flow of resource generation to pay for mitigation and set up for some Buy Outs.

GRAND MOFF
The negative side of this upgrade is that it is Unique Red Character only. Positives, the dice sides fit perfectly but the real strength is the Power Action. It helps you get your Command Center if the initiative roll off went wrong, or you are Power Actioning for a massive 2 cards off the top of the deck ensuring that you cover one of the weaknesses of villain mill.

BARTERING
Cheap cost for a extra dice with all the right sides. Try to always get this upgrade down, you sometimes need that extra discard or resources.

PERSONAL SHIELD:
I Love the fact that when I play this upgrade most people have to pick it up to read it. The current meta is very ranged damage orientated, i.e. Vehicle decks and Talzin/Mandalorians, so the ability on this card can save the day. There are arguments for it being a 2 of, but as hero mill was expected to be prevalent, I opted for 1 only.

ARMOR PLATING:
It's like having a extra mitigation card but you can play it early and proactively which is important.

SALVAGE STAND:
It's great for limiting your opponent's ramp and make sure that he has to work harder to get his upgrades/supports down allowing you time to get you dice out and hopefully be able to discard the cards from his hand beforehand (Point of note : This triggers off rerolls not just character activations.). If you would lose out on claiming because of playing this card, it was a bad move to play it.

If Tarkin had a Disrupt side there might be a strong case for including Imperial Inspection, but it's too unreliable with just Disrupt sides showing on Jabba's dice.

HONOURABLE MENTIONS:
Blackmail and Fast Hands. I know you were questioning why they were missing as soon as you saw the upgrades, but I found that if I didn't get them both turn one they became useless. The game moves so fast currently, playing upgrades that rely on a combo seems wrong for a aggro deck. I am sure there could be very solid builds of this deck which include those upgrades, I just found they did not fit my game plan. 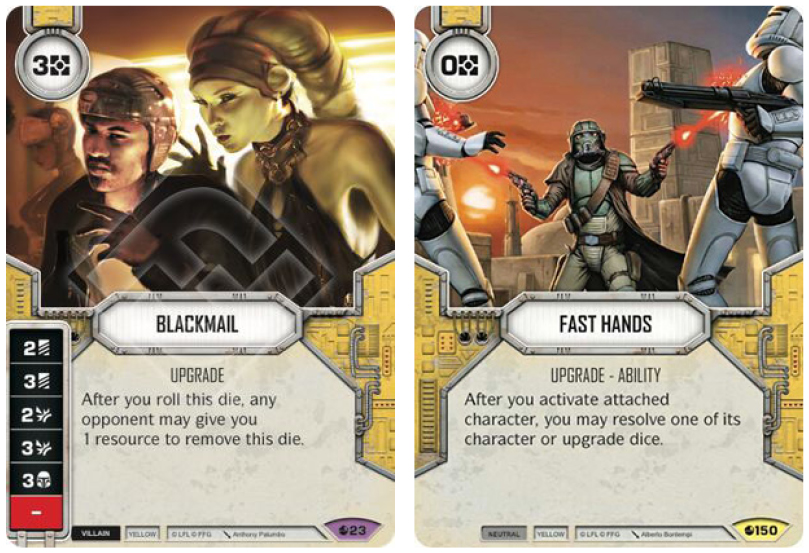 4. EVENTS: I feel that any competitive deck must have a minimum of 8 removal cards, and counting Dug In and Armour Plating, lets say this deck has 10. The only point of note is there is no The Best Defense. In my play testing this card has been in and out of the deck and can easily be traded out for Superior Position.

DUG IN, HASTY EXIT and SUPERIOR POSITION all requires control of the Battlefield, and it says something about how this deck play out. It's a fast mill deck, and you should ideally have control of the battlefield from the beginning of the game (your dice are good for the roll-off with Jabba having 7 on the dice and Tarkin 8). Half of your mitigation suite are based on battlefield control, keep this in mind when tactically planning out your turns. The other half: Electroshock, Entangle, Free Fall, He Doesn't Like You and In the Crosshairs are almost self-explanatory. There's room to change it up a bit though! 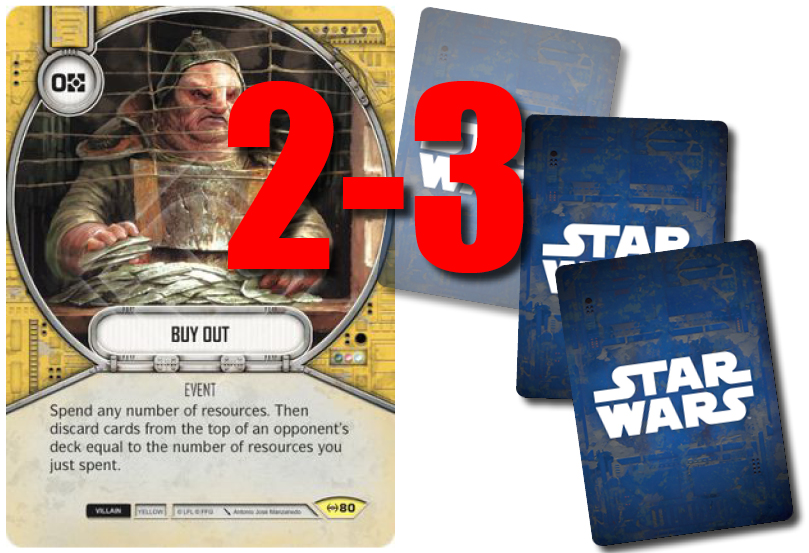 BUY OUT:
So we would love to be doing a Buy Out of 10 cards on turn 2, but I live in the real world where dice and cards don't play ball.  With the support of the Battlefield, Command Center, and Grand Moff a Buy Out of 2-3 acrds is normally all you need to be doing fine. If they start the game hitting on Tarkin you can give up the desire to play Grand Moff and go for that mouth watering Buy Out instead.  Keep counting their deck and hand, so you're never wasting resources on a large Buy Out that you don't need. 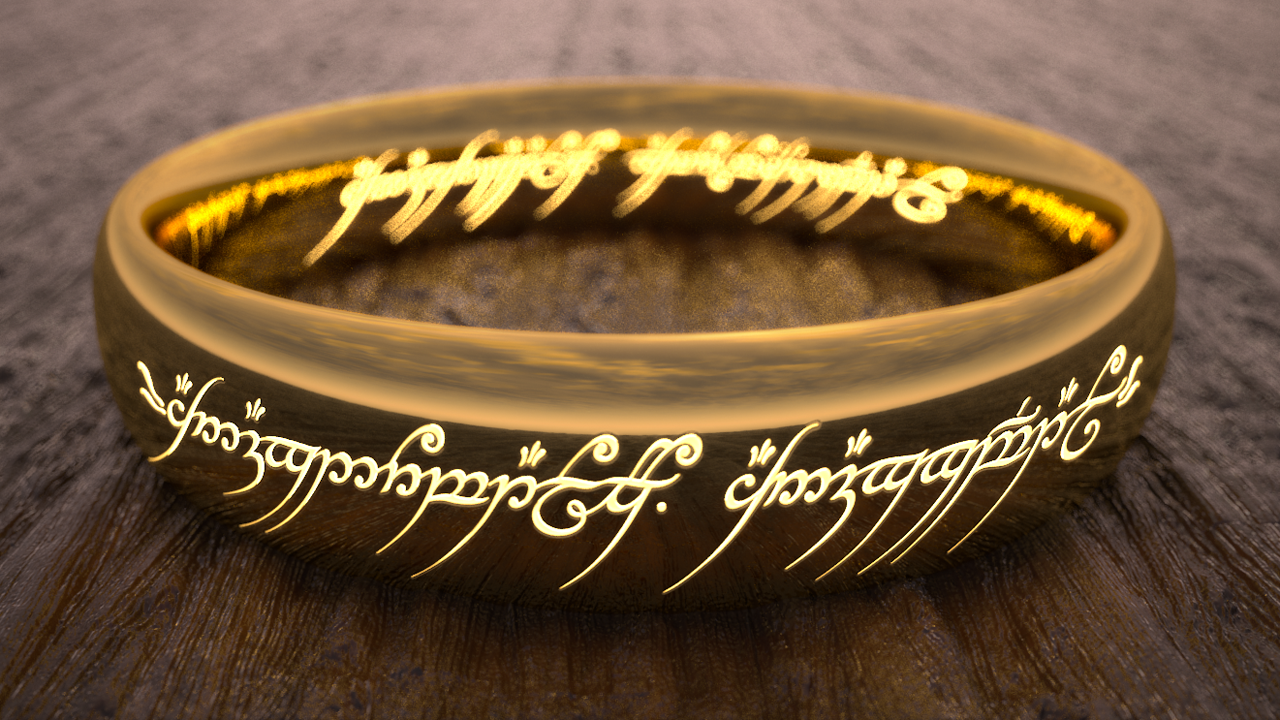 ALL IN / TACTICAL MASTERY:
These 2 cards are going to cause your opponent to sob into their blue milk. With two Focus sides on each of your characters and Jabba's ability, the chances of rolling at least 1 Focus side is 87.5%. All you need is one focus to rule them all.  Tactical Mastery can also be used for plays like 1) play removal and 2) claim and the emergency roll/re-roll and resolve. 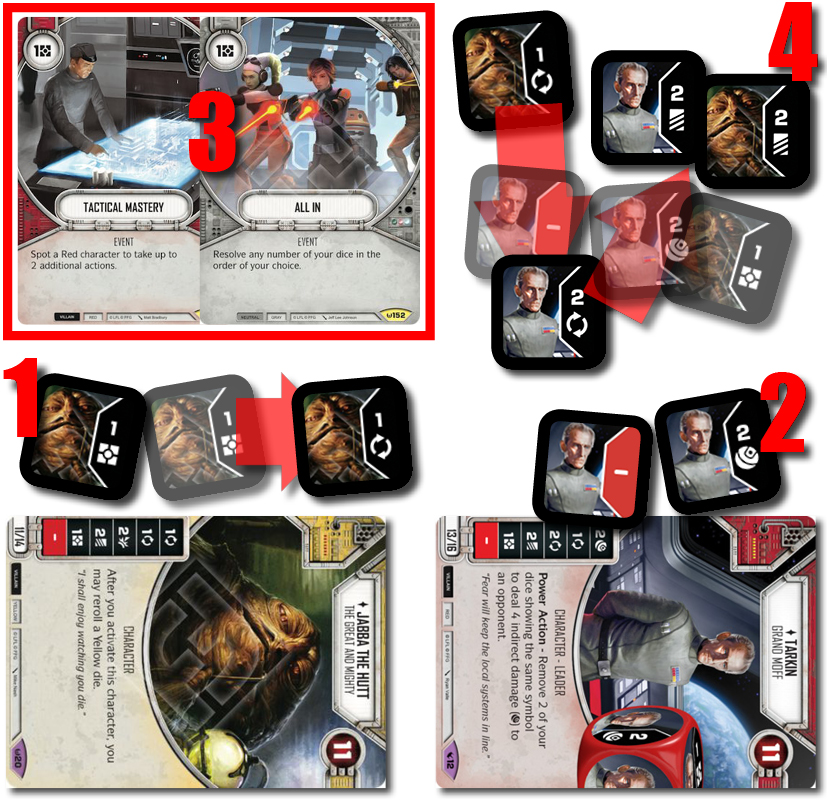 2. SECOND action: Activate Tarkin, dice showing: 2 Indirect and a Blank. The combo play is playing Tactical Mastery so all this can be done without uninterruption.

3. THIRD action: You can now use All In or Tactical Mastery to turn Jabba's 1 Focus into Tarkin's 2 Focus. Use the focuses to turn the other Tarkin and Jabba dice into 2 Discard on both, and then proceed to annihilating their hand, normally leaving them without any re-rolls (Point of note: Against certain decks, the 2 Disrupt on Jabba might be more worthwhile resolving.)

The trick is obviously to be able to facilitate these plays uninterrupted and unmitigable. In this respect Tactical Mastery and All In are to be treated exactly the same!

At this point your opponent will be thinking what a wretched scum and villain you are, embrace this feeling as they will now be stuck with the choice of doing something or letting you claim for another 2 cards off the top of their deck.

FRIENDS IN LOW PLACES:
Use them to protect your Buy Out, All in/Tactical Mastery and double Discard rolls. I didn't run the card in my UK National list BUT I WAS WRONG, this card is still fantastic.

NEW ORDERS:
It won me my top8 place in the UK nationals vs the former UK Champion Danny Adlem! Need I say more?  Don't keep this card in your first hand as you plan on winning that roll off: NEGATIVE THINKING AFFECTS YOUR ROLLS !!!
5. BATTLEFIELD: 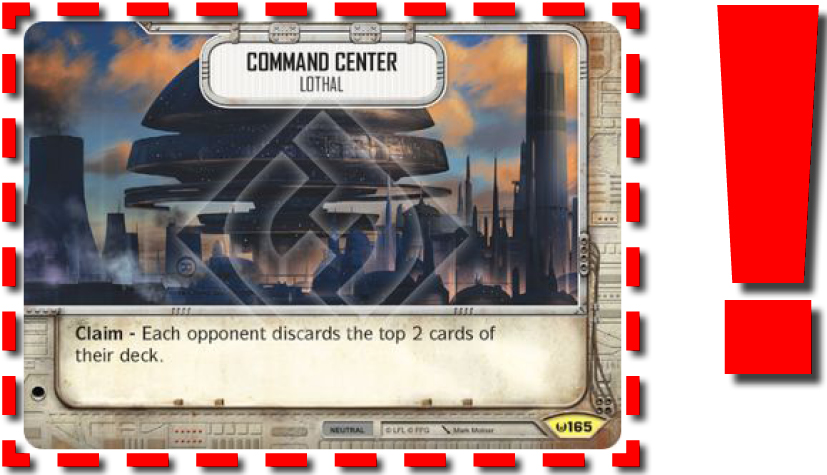 The importance of this battlefield can't be stressed enough. Your goal is claiming in the first 3 rounds. 6 off the top of the deck is a whole round of combat you wont have to face!!
6. MULLIGAN OPTIONS:Not to toot my own horn, but this deck is really difficult to master, and it requires constant tactical adaptation. You might look for other cards against certain decks, i.e. A Grand Moff instead of Bartering against mill decks or vehicle decks.

Charming to the last,
7. AMENDED DECK LIST:If I were to run the deck list today, it would look like this: 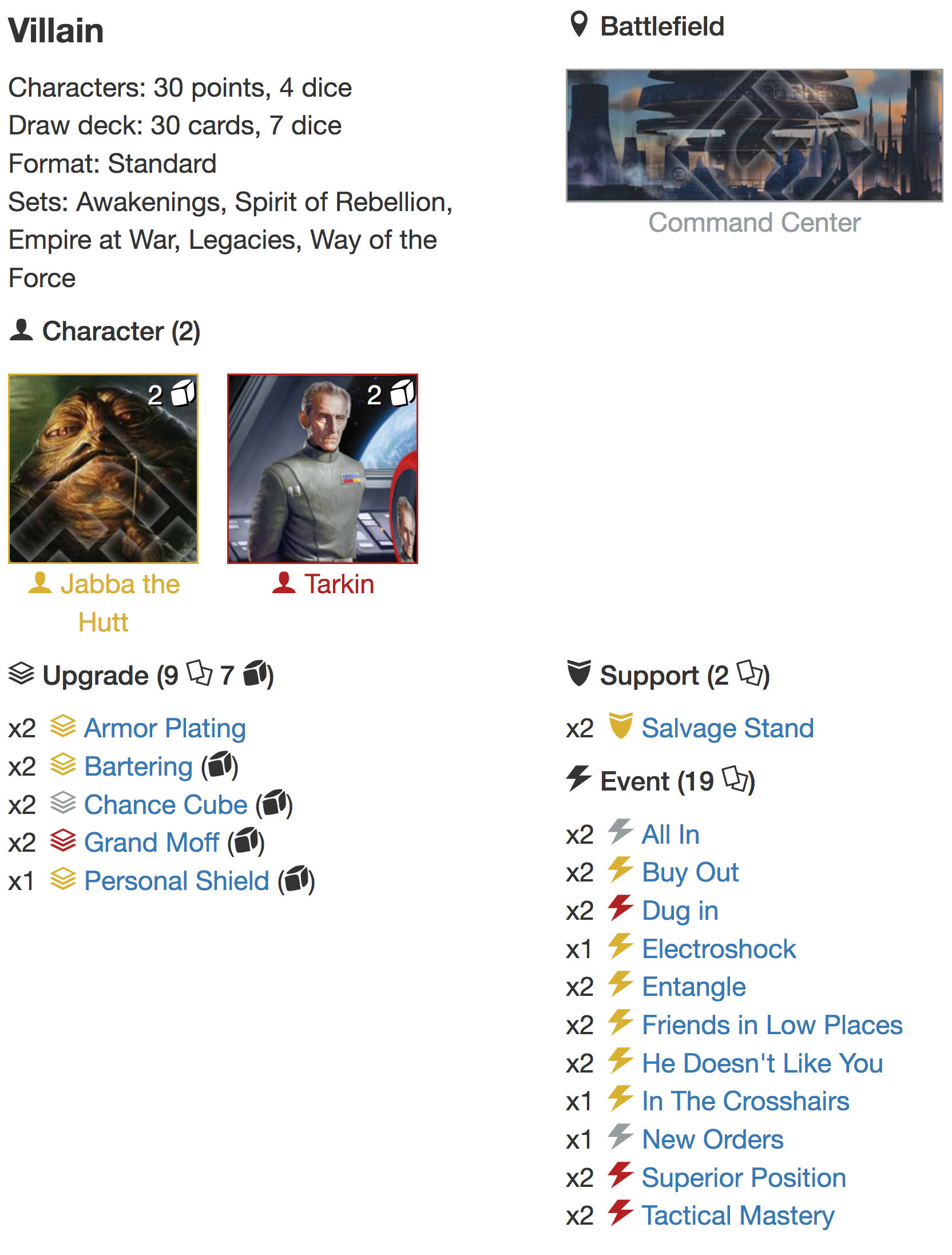