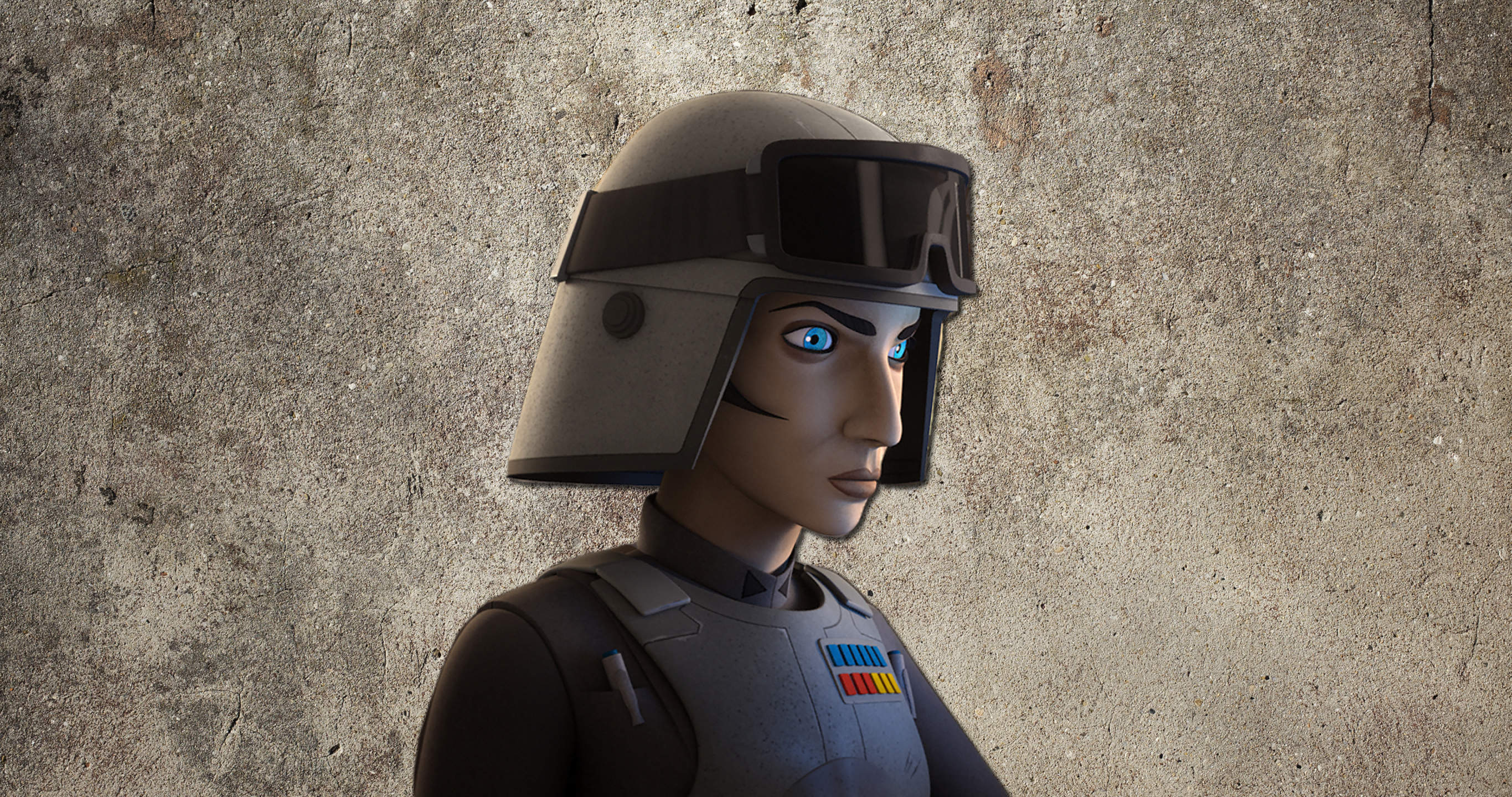 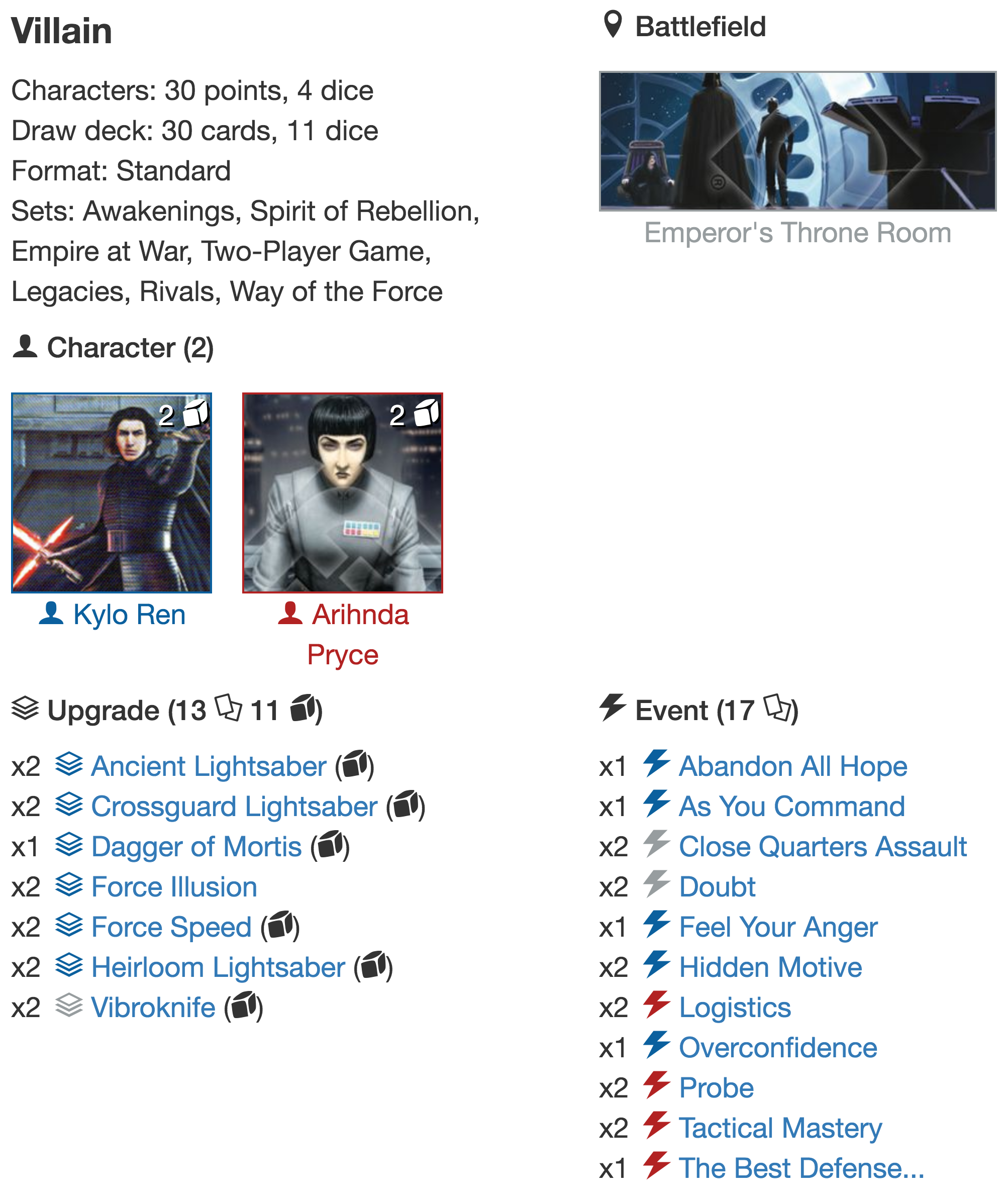 THE PRYCE OF SUCCESS? 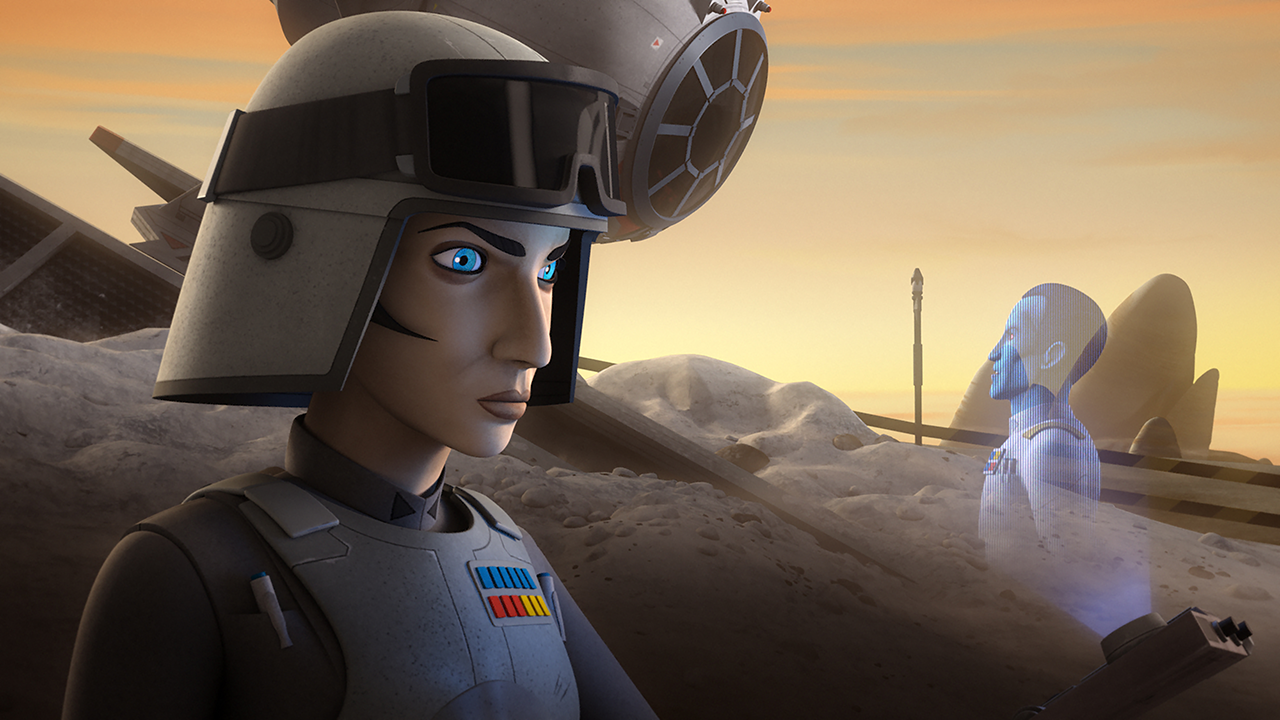 1. GENERAL COMMENTS:In the last few weeks before Way of the Force was officially launched into stores, I, like many others, gleefully took in the many spoiled cards that FFG kindly provided to the many amazing content creators for Star Wars Destiny. As a predominant villain player in all previous sets and games I have participated in, I was immediately drawn to the bad guys.

The internet was quick to proclaim Snoke and his inherently powerful Power Action (damage a character to resolve one of that characters dice increasing its value by 2) was the first one to intrigue me. But as I tested Snoke, a sinking feeling grew... why am I, in trying to win, helping my opponent hurt my character? That sensation grew so intense that I felt I could no longer test even with him making Cad Bane playable again (see the YOUR Destiny write up of that particular character team). No other card felt good until I saw a dark haired lady.
2. CHARACTERS: 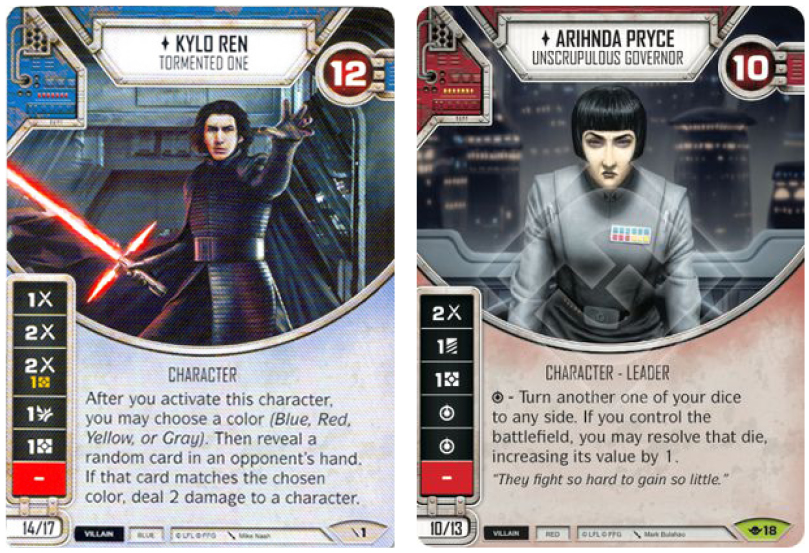 The Star Wars show Rebels really caught my attention and in the final two series Miss Arihnda Pryce (there's an in-depth character analysis here) epitomised not only the evil Empire, but all round villainy in general. So when she was spoiled I looked at her die. 2 Melee, 1 Discard, 1 Resource and 2 Specials. It was the special that made me decide she was partner in crime numero uno. Turn another one of your dice to any side (Ok I think, it’s a new Red Talzin) Then came the decisive blow. If you control the battlefield you can resolve that die increasing its cost by one. WHAT? Added free damage? No Snoke'esqe pain on one of my characters? I swiftly decided she was so good even at a single die that Pryce at elite would be crazy good. and seeing how she's only 13 points elite ... I mean that allows a hard hitting melee character to accompany her on a Galaxy crushing killing spree - so enter everyone’s favourite Emo Kid: Kylo Ren. 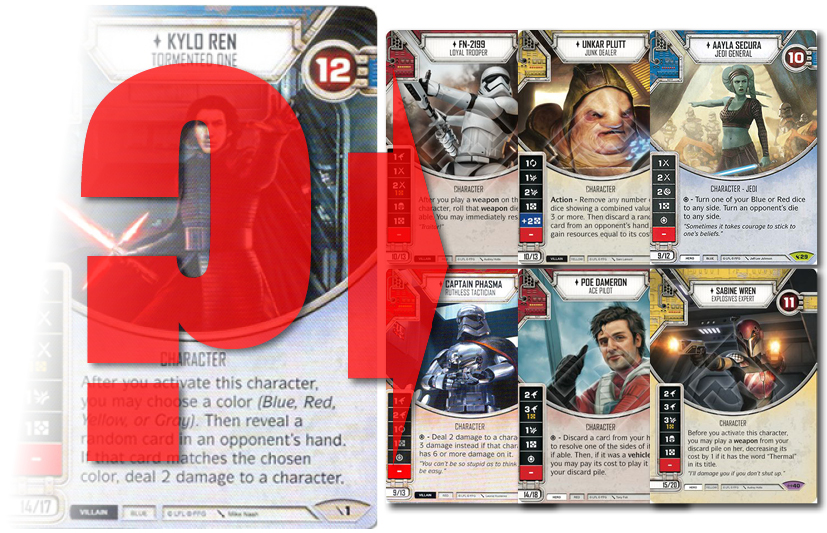 KYLO REN - RIPE FOR BALANCE OF THE FORCE?
If ever a character needed a Balance of the Force it is Kylo2. Under costed is a term used a lot in Destiny (Aayla, Sabine, Yoda to name a few) but at 17 points elite and his hugely annoying activation ability, has there been a more destructive character in the game? Sure FN-2199 was annoying. Unkar Plutt equally so, and Poe Dameron in his earliest form also. But Kylo2 is superbly effective. A decent player who knows the average Gauntlet decks, will know the main colour scheme that allows that deck to perform and play the average numbers game. Against a mono coloured deck however, and it can almost feel like an auto loss for them. That 2 free damage before he even resolves dice is a huge variant in damage swing that continues to put them on the back foot. So that left me no choice at all. Kylo and Pryce, or KRAP as it has been dubbed was a thing.
3. UPGRADES:I know my deck can cheat out damage through activation and claim fast, but I also know which cards make me sigh audibly when I see them played: yes Second Chance and Force Illusion I’m looking at you! So I wanted an upgrade suite that could be resolved at once, transfer across, heal, be cheap and have tricks that ruin your opponents whole hand, turn or even game.

Choosing the lightsabers seemed the obvious choice over the holocron package as both characters have Melee damage sides, although Arihnda Pryce have only one, but Kylo a plenty. 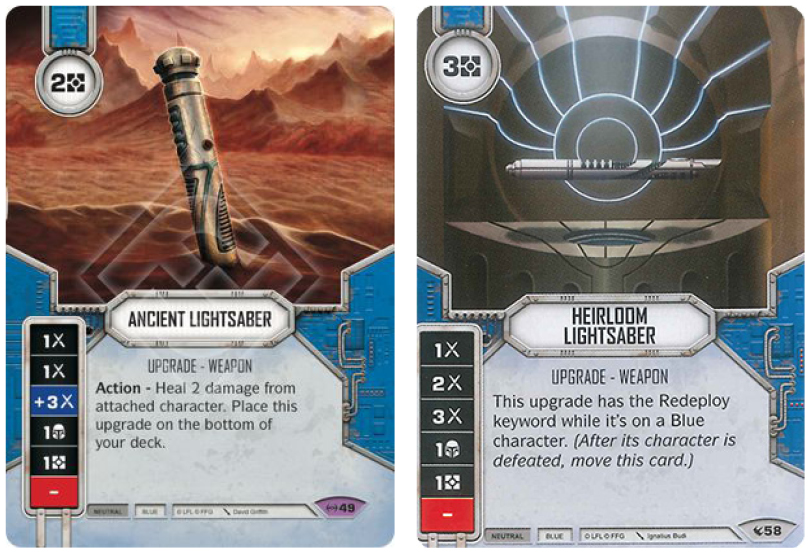 ANCIENT LIGHTSABER doesn't really need an introduction as it has already become a staple in blue saber decks, and is extremely efficient for its cost, same goes for the HEIRLOOM LIGHTSABER, which comes with Redeploy and plenty of base damage sides. 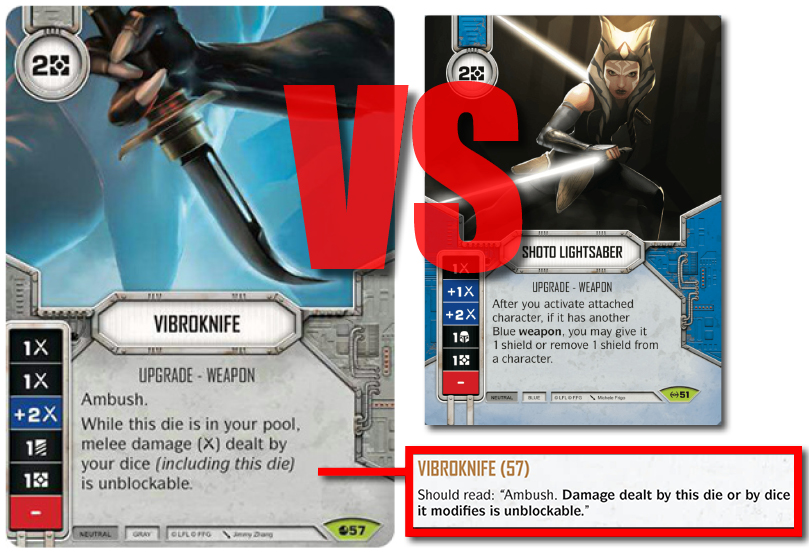 The original nerf to the previously invaluable Vibroknife hurt but, to be dealing UNBLOCKABLE damage to reduce a Force Illusion to a worthless piece of paper is still priceless!

Like wise the CROSSGUARD LIGHTSABER have, as in Edwin Chen’s Worlds winning deck (Kylo/Anakin) won me games just by playing it on Kylo. The final two upgrades just fulfill what this deck need to be to work well, be fast and cheat an extra action.

A FORCE SPEED on Kylo can almost win you the game turn 1 and the simply amazing new DAGGER OF MORTIS, with its ability to "strip a shield off to gain one in return" and superb die sides make it an auto include. The fact that it has Redeploy makes it a huge in my book. As this deck doesn’t want to spend a turn playing a support we simply didn’t add any (also the exclusion of Shoto Lightsaber makes It Binds All Things less desirable).
4. EVENTS:

The event suite has been the most challenging so far. A few of the cards have been in the deck since it’s first run out: CLOSE QUARTERS ASSAULT (even with just one Melee side on Pryce), DOUBT, and HIDDEN MOTIVE are must-haves of any decent melee deck. In most of my testing they have performed admirably game after game.

LOGISTICS is an easy zero cost to hit an early resource roll out from Pryce into 2 more resources which can be used to advance your board state (a second saber on Kylo) or to play 2 one cost events. Let’s take an example: 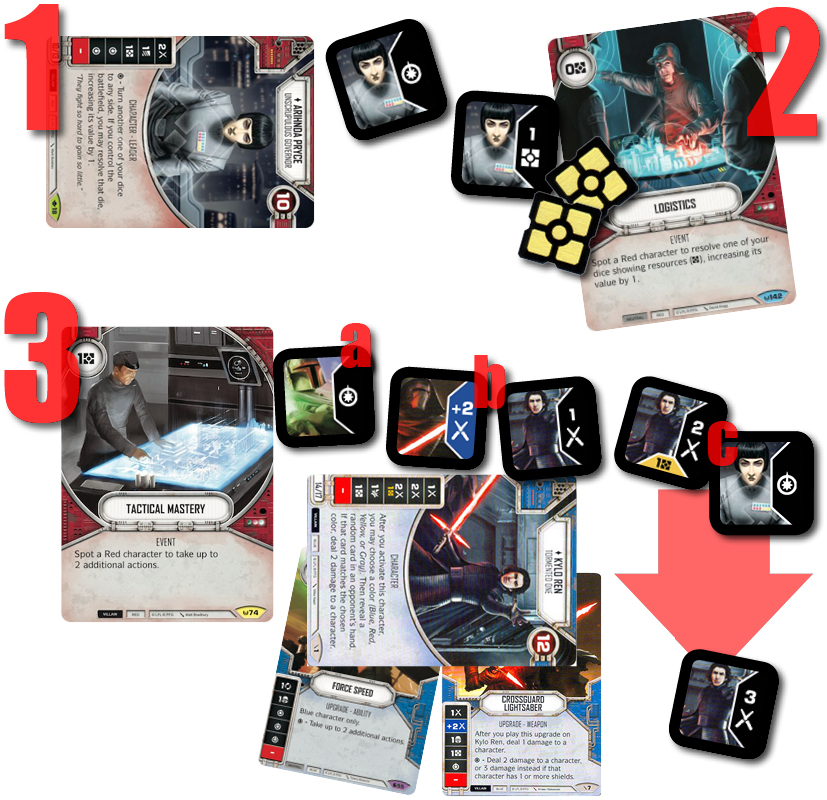 OVERCONFIDENCE has been reduced to 1 copy as Kylo is normally focused down fast and it is a Spot Blue requirement. Likewise a timely THE BEST DEFENSE, again a one off, can help steer lethal showing damage into Pryce. As she is our only Red character I can’t find the heart to include two copies as my tech suite needs a few tricks to hustle more hurt. Finally PROBE is there to totally ruin a hand, that inclusion came directly from Discord. The way people normally map out a round is to play their upgrades first, then get dice in the pool, keeping any mitigation back in their hand to try and control their opponent. That's when you hit their hand to make sure their event suite is gone so you can hit for damage without mitigation.
5. TECH CARDS: 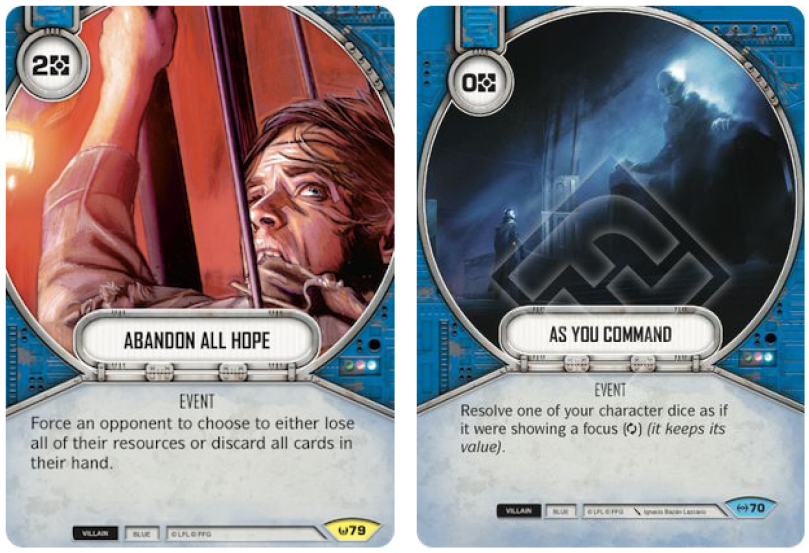 Tech wise I have 3 solid cards that have proven to work well against most of the new Way of the Force meta. As suggested by Claus Staal, ABANDON ALL HOPE is a terrific card that forces your opponent to lose either all their cards or all their resources. It can totally ruin an entire turn. Done early enough it can almost single handedly have put you so far ahead that you rarely lose, especially against a vehicle deck. Seeing Planetary Bombardments, Crait Speeders and other nasty ships hit the discard pile is extremely satisfying. In addition, versus aggro them losing great weapons they can’t return is equally great. The 2 cost is steep but often worth it.

AS YOU COMMAND is an older card and as such doesn’t see much competitive play, but it still checks out! Resolving one of your die as if it has a focus symbol here is a game winner.

I'm still considering GRAND ENTRANCE as a possible tech card as it really looks bonkers in this deck.
6. BATTLEFIELD:I’m not for one moment saying I designed this deck, but from day one I felt that with the right thirty cards it could be a tier 1 deck. That led me to the first card I choose and spend so much time thinking about: THE BATTLEFIELD. As I have written and talked about on various podcasts before, I consider my battlefield to be the 31st card in my deck, and as such, needs careful consideration, before finally choosing which one I go for.

At the time my thoughts were final and clear - it had to be EMPEROR'S THRONE ROOM to make full use of the 2 specials on Pryce’s die. However, this ended up becoming a huge can of worms online over how and when the claim ability happened and could Pryce use it to an almost manipulative effect?

In the interim I decided that as Kylo has the resource cost on his second 2 Melee side, that Outer Rim Outpost, for the draw a card and gain a resource, seemed not only fair but viable. As you may be aware, the most recent Official Destiny Rulings clarifies that Pryce can indeed claim and do her full special ability so Throne Room instantly was reinstalled. In a game of dice and card fixing I feel that any and all advantages should be used to maximise your decks chances of success. Playing relatively fair these days does not equate to a huge tick in the Big W column. Which leads me to my deck choices that have been finely tuned, not only in real life, but through online play and fantastic conversations on Discord, a resource that if you haven’t joined into yet can easily make you a better Destiny player (find out how to join the YOUR Destiny Discord channel).
7. HOW TO BEAT THE DECK:Essentially, like beating most decks, whatever type of deck you are piloting will determine your strategy in defeating it. A pure aggro deck or indeed a mono coloured deck, should aim to eliminate Kylo’s very consistent activation damage early, making him the prime target for most people.

In addition as most of the weapons will be placed onto him in early rounds, if he has a Vibroknife and a Force Speed that can’t redeploy across to Pryce, then the better board state for your plan to win becomes. As a mid range or control player try to use your mitigation hard and early, Easy Pickings, Feel Your Anger, Mind Tricks and other great cards can ruin their plans. Be thoughtful of any chance to mitigate dice as it is the decks real strength.

To mill win constantly try to get cards out of hand early, Cassian, Leia and Yoda are fast great characters at this play style. Kylo can’t heal two damage if his Ancient is in the discard pile! Vehicles need to stay true to their form book. 3 & 4 wide decks push this deck hard and by round 4 you should have enough ships and supports to ensure the breakthrough. As with all decks try to minimise Kylos easy 2 damage by keeping as much colour diversity in your hands as much as possible, which as mono deck, although hard to do, can be done through Hidden or Holdout Blasters, Doubts, CQA or even a Flank or Garbage Chute.

Personally on my YouTube channel against Kylo I never pitch a variant colour at the end of the round to reduce his chances of hitting the colour chosen. Finally Pryce is what makes the deck work by claiming early. Do not be afraid to leave one, two or four dice out to stop that increase by 1 on a Pryce special. Battlefield control is essential so claiming early shuts down this pairings oppressive damage output.
8. TTS GAMEWatch a commentated TTS Game between Miguel Villaroya (Kylo/Pryce) vs. Sam Miles (Aphra/Ciena/Snoke). 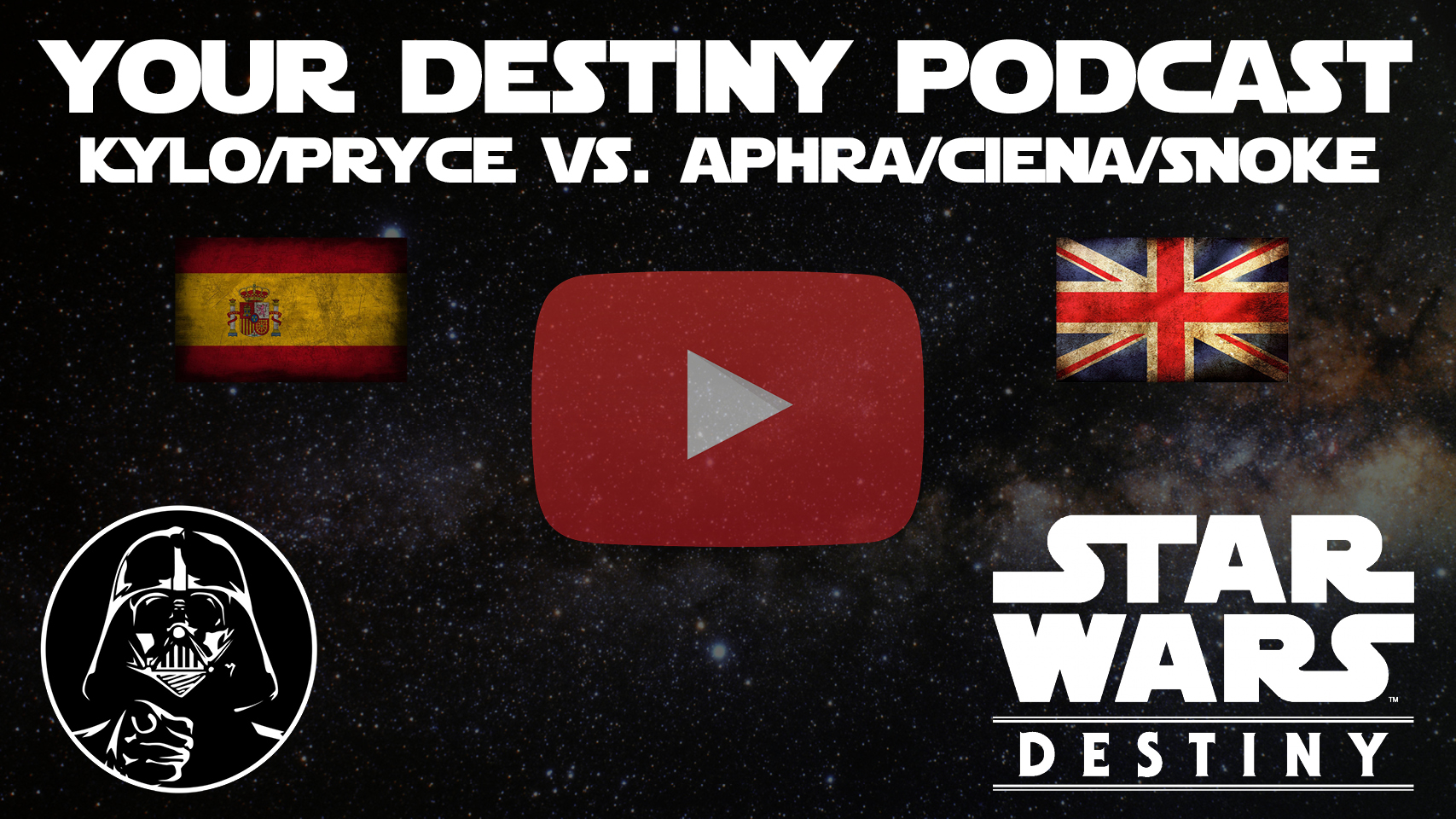 9. CLOSING THOUGHTS:Having tested this deck out almost exclusively over the past few weeks, I feel it is time to show it off. It has won a few Store Champs in the US and although it hasn’t really taken off in Europe, yet, like all good decks one big Regional or National win will launch this deck to essential play against, as you will start to see it everywhere.

Is Kylo really Pryce’s best partner? It’s too early to say but as of the first month of the meta, it’s a solid pairing that is consistent, fast and aggressive, yet has good mitigation and trickery. Try it for yourselves and see if playing with Arihnda makes not paying a Pryce with Snoke a far better option for your villain choices.
Written by
SIMON WILLIS
aka Sith Holocron