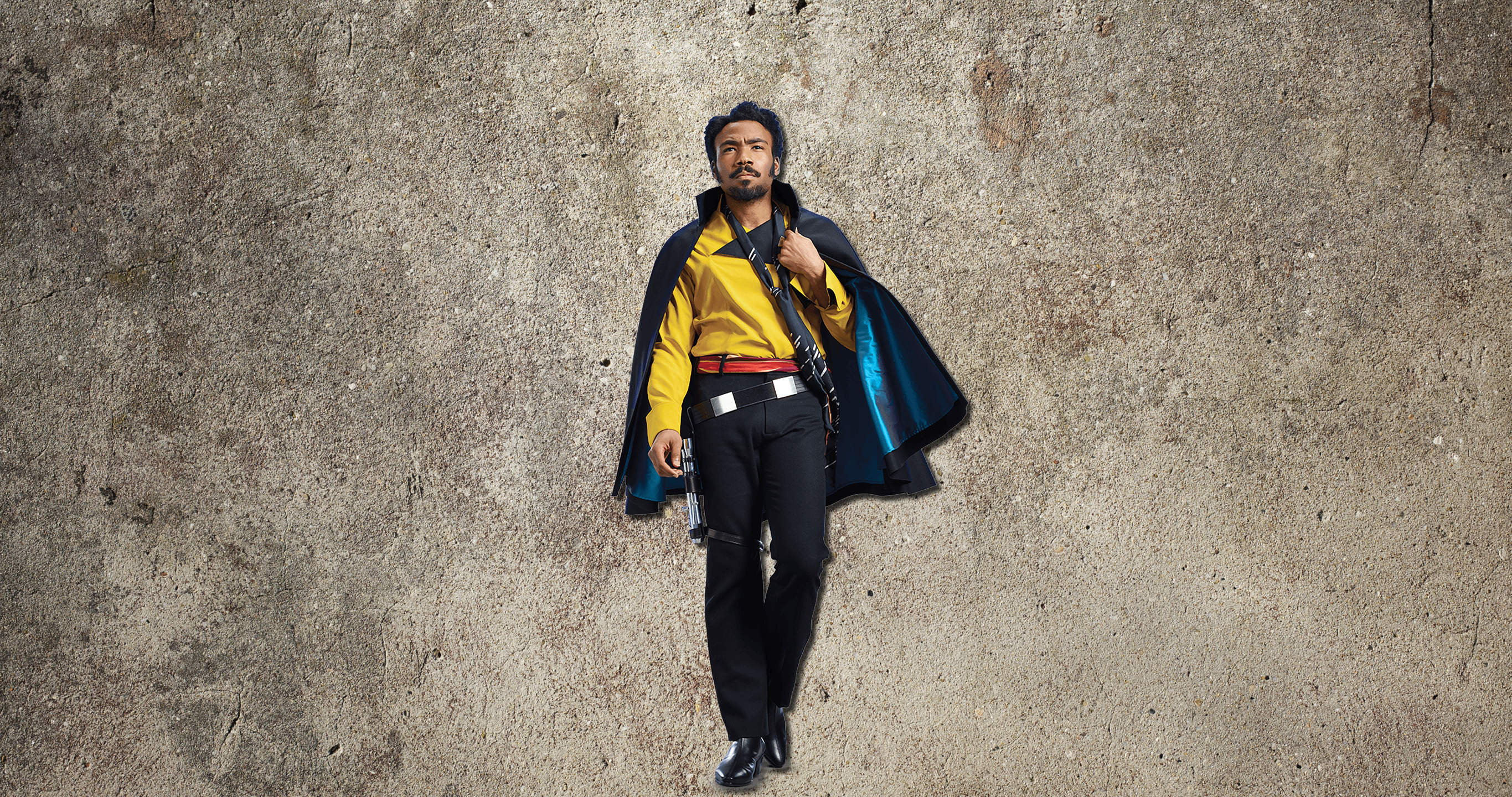 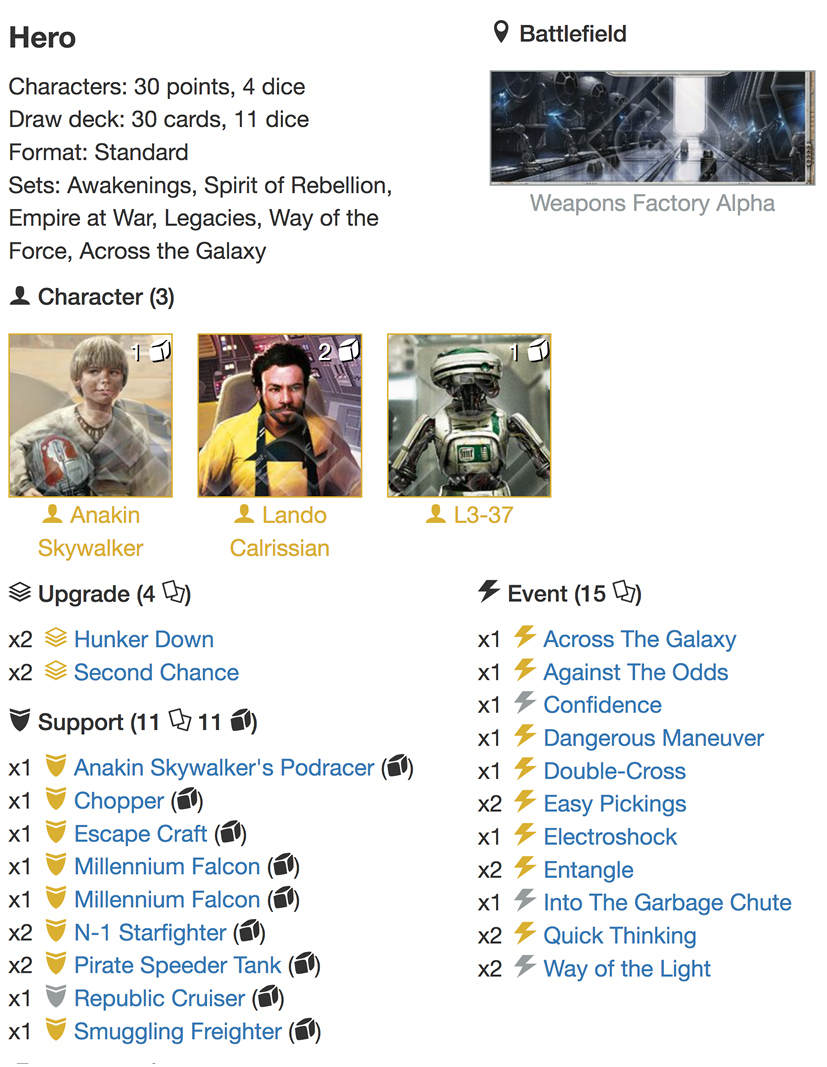 1. GENERAL COMMENTS:
This deck is still VERY much a test-deck, which then explains the many one-offs in the deck. Although some of the cards should probably remain one-offs.

The deck generates an obscene amount of resources, almost rivaling that of Thrawn. You are aiming to ramp HARD round 1 and although your board state is vulnerable due to just a few dice putting in a huge amount of work, you do run a few tricks that might help you out.

Don't worry too much if you don't get the Falcon in your opening hand, you still have other vehicles that can do the trick, although the lack of quality vehicles for mono yellow could be a concern. Adding a T-47 Airspeeder is awfully tempting, but it doesn't work with Lando's Power Action and just doesn't feel like the right fit in the deck.

This deck has a lot of staying power with 26health across 3 characters access to loads of shield generation as well as Second Chance that can be played on any of your characters!
2. CHARACTERS:

LANDO CALRISSIAN is an absolute monster at making money. Sure, you might only net 4 resources if resolving both his sides, but that along with his Power Action goes a long way to put a BIG yellow vehicle in play round 1. If you are able to put down a Millenium Falcon or a Pirate Speeder Tank, you are putting some serious pressure on your opponent! Lando also adds some punch in the mid- to late game where you need to push through the last damage.

The real combo-piece in the deck though is the interaction between ANAKIN SKYWALKER and the Droid Revolutionary L3-37. Being able to autofocus her sides into a 2 Focus, which is probably what you'll be doing most of the time or a Resource if needed gives your deck a rock solid gravitation point. So the order of activation is ALWAYS: L3-37 followed by Anakin!

It has also been clarified what happens when L3-37, which then means that Anakin Skywalker's ability does not work on her when she's changed into a mod upgrade.

HUNKER DOWN put in some real work in the DJ/Aphra/BD deck that we analysed a while back. The meta might, and probably will, change significantly with Across the Galaxy and the arrival of one Mr. Terror to Behold (although I'm still very much in doubt that he'll make into the competitive scene). The emergence of new Melee based decks could dissuade me from including Hunker Down or at least do a 1/1 split between that and Diplomatic Protection. 4 Shields from Diplomatic Protection is nothing to scoff at!

SECOND CHANCE
In a deck with 3 yellow characters this can go a loooong way to keep either of them alive for another round allowing all your amassed fleet of vehicles to secure the win! It's essentially 5 shields on any character you play it on and can even serve as a strong deterrent for your opponent who might chose to pursue softer targets.
4. SUPPORTS: 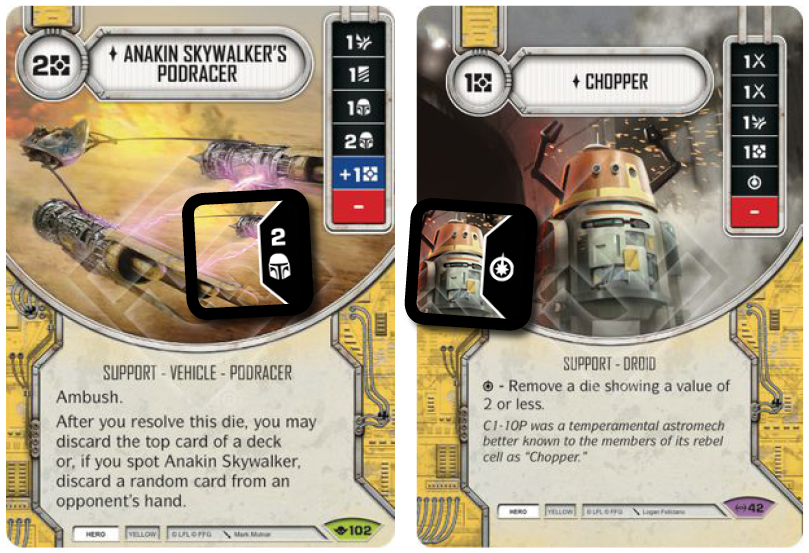 ANAKIN SKYWALKER'S PODRACER and CHOPPER are both defensive cards and synergise well with Anakin Skywalker. You are most likely looking for the 2 Shield side on the Podracer, while the "Electroshock" Special of Chopper can potentially give you free mitigation every round.

Both cards might be gimmicky pieces and at least 1 of them could be cut in the final version of the deck. Anakin's Podracer can be played for free using Lando Calrissians Power Action and controlling Weapon's Factory Alpha, so that might only be relevant in round! I'm pretty convinced though, that you need to piece together a pretty strong defense in this deck. Your sidekicks are 7 and 8 health respectively which is not a lot in a world where decks easily push through 10+ damage per round!

There are currently 3 different versions of the MILLENIUM FALCON printed for Star Wars Destiny. For the purpose of this deck, I'd only consider the Awakenings and Across the Galaxy version. The one from the Luke Starter Set simply doesn't feel strong enough whereas both other versions have incredibly strong die sides, no Blanks and also the potential to help your ramp if needed with a 3 Resource side and a 2 Resource side respectively.

You can either run a 1/1 split or go all in on either version. My preference right now is to do a 1/1 split, with the negative side effect of not maximising on the ESCAPE CRAFT effect on the Across the Galaxy Falcon. IF I were to go all in on one version, I'd stick to the AtG version! 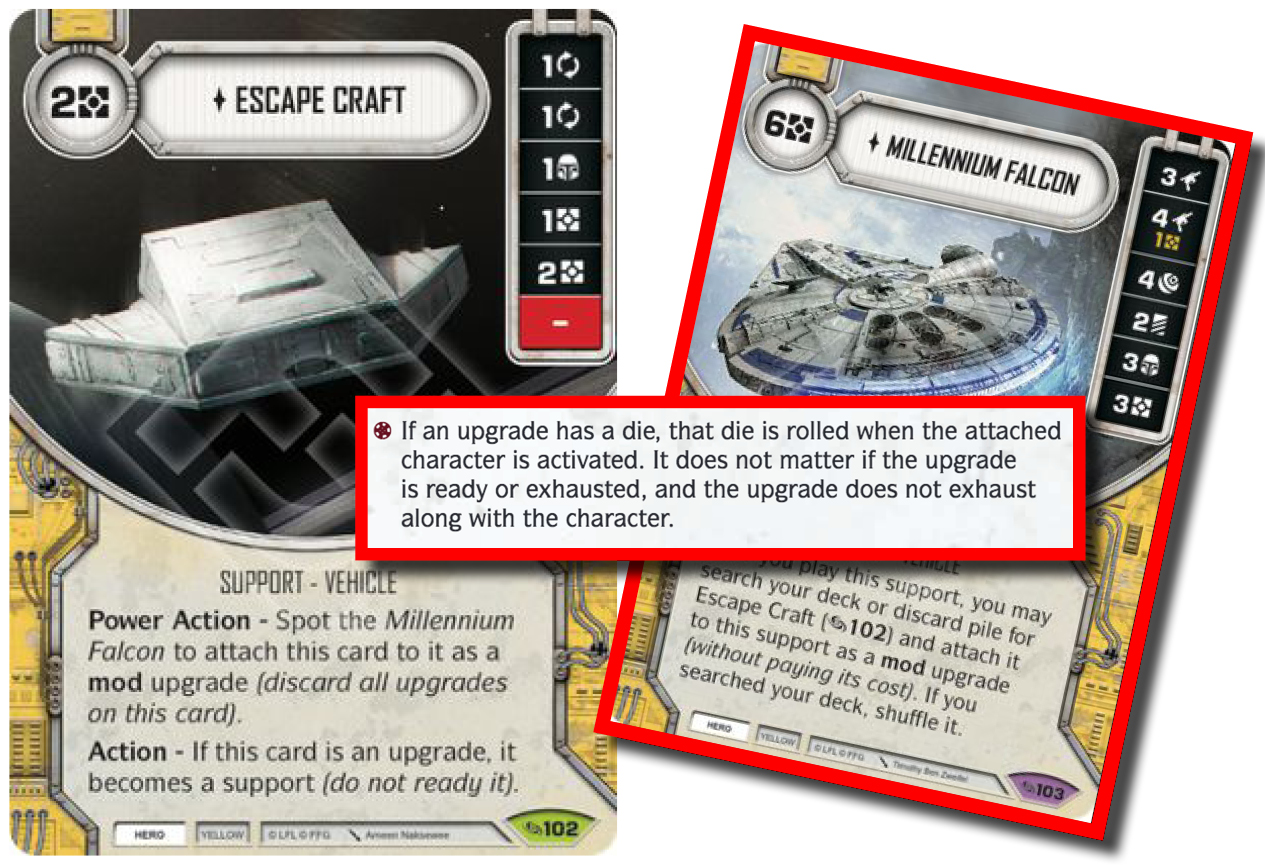 The synergy between the AtG Falcon and the Escape Craft is for dummies. The only real question is whether the "may" on the Millenium Falcon refers to both parts of the sentence, i.e. may search and may attach it as a mod upgrade or whether it has to be read in conjunction as in "may search and (then) attach as a mod upgrade". I believe it's the latter.

If we also assume that mod upgrades, in other respects, work in a similar way to upgrades on characters, then you'd probably be able to roll the Escape Craft die into the pool when attached to the Millenium Falcon even if it has previously been exhausted as a support and later used the Power Action to attach itself as a mod upgrade. So there's going to be 2 resolutions possible with the Escape Craft, which is pretty nuts for a support with a 2 Resource side!
[NOTE]: You cannot run more than two copies of the Millenium Falcon in your deck no matter which version(s) you choose. The "same card" (cf. Building a Deck) refers to the TITLE of the card, not the card itself. 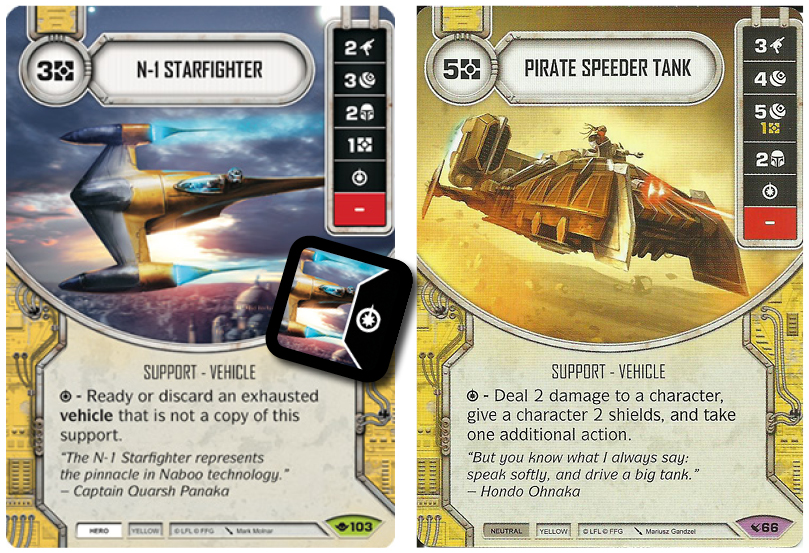 The N-1 STARFIGHTER might end up being a real hit in this meta as it finally looks like Yellow Heroes have what it takes to go toe-to-toe with villains in the vehicles race! It's sides are decent, but the Special is pretty crazy, particularly if it is used to ready a Pirate Speeder Tank or a Millenium Falcon! Like most of your mainstay vehicles the N-1 Starfighter also boasts some real defensive measures in having a 2 Shield side (so does the Pirate Speeder Tank, Anakin Skywalker's Podracer and the AtG Millenium Falcon a 3 Shield side).

PIRATE SPEEDER TANK
I've really warmed up to it. 3 BIG damage sides and a Special which is pretty awesome. Resolving both a Pirate Speeder Tank Special and an N-1 Starfighter Special in the same action and then rolling the Pirate die right back into the pool is pretty awesome! 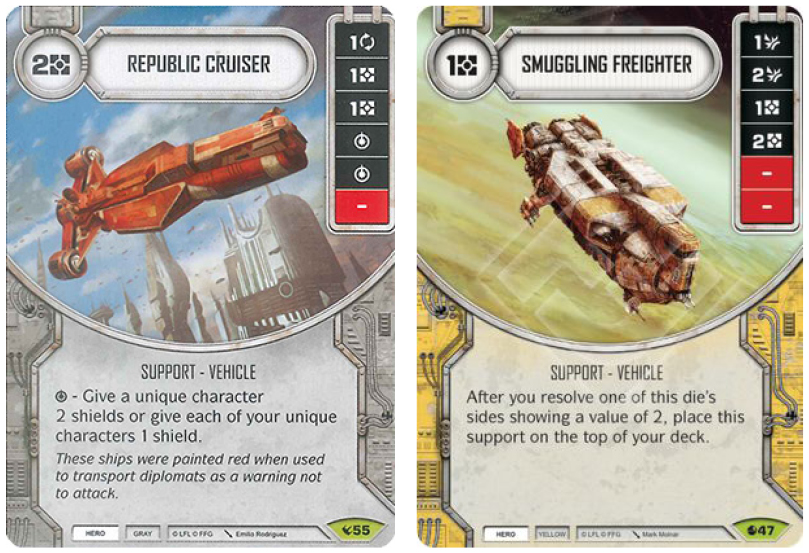 The REPUBLIC CRUISER can either generate money or give Shields while its Focus not too shabby either. I'd imagine in a more streamlined deck that this will be cut from the deck entirely.

I like the SMUGGLING FREIGHTER as it can be played for 0 resources using either Lando's Power Action or the Battlefield, be focused into a 2 Resource and put right back on top of the deck when resolving the 2 side. It's not a MUST in the deck, but is awesome for resource generation.
5. REMOVAL:Your primary removal suite consists of ten cards while your deck includes a few other cards that are functionally removal cards (i.e. Second Chance). As with the rest of the deck the removal suite requires reworking and might have to be adapted to your specific meta, but generally I'll reserve final calls for when the meta has settled somewhat. 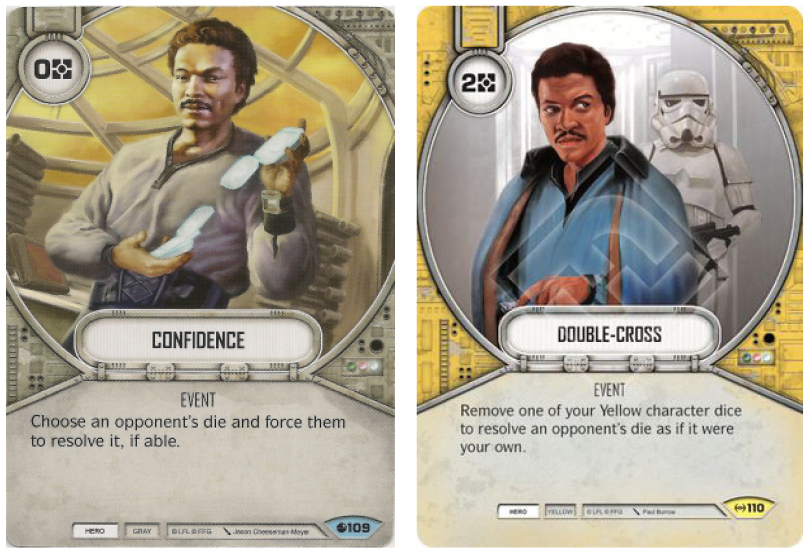 There are some interesting reoccurring themes in these cards apart from the fact that Lando Calrissian is used in the artwork for both (!!) ... They are both cards that have seen very little love in previous metas, while I do believe they could actually force their way into some decks due to the possible changes in the meta.

CONFIDENCE is in a weird spot, because it's free mitigation which is good, but you allow your opponent to resolve a die in your turn. I do think though that the prevalence of Snoke in competitive decks as well as the anticipated coming of Darth Vader will raise the stock for any mitigation that can control, but not remove dice, whether it's to bypass Vader's Power Action or get rid of the character dice of Snoke sidekicks. Just remember the annoyed look on your opponent's face when you force him to resolve that 4 Disrupt on his Planetary Bombardment with you having no resources left or a Yoda 2 Focus with no other dice in the pool.

DOUBLE-CROSS is in all respects the advanced version of Confidence. You remove one of your yellow character dice to resolve one of your opponent's dice. It's superior to Reversal because it lets you resolve ANY die. It's incredibly powerful and can really turn a game!

EASY PICKINGS, ELECTROSHOCK and ENTANGLE are all Spot Yellow cards, which is normally prohibitive for them, but not here! They are some of the best mitigation available and are must includes. Electroshock is a one-off though as it is best suited to target character dice and falters against big support dice. 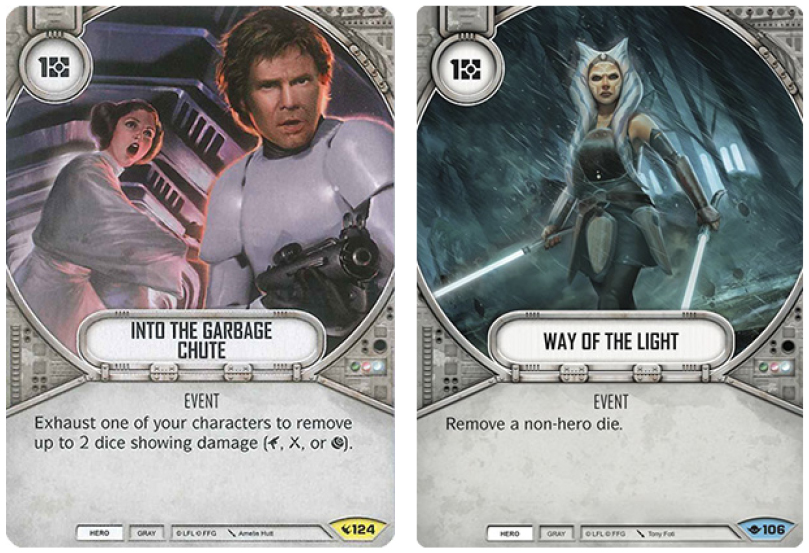 INTO THE GARBAGE CHUTE can be a massive blowout card removing any dice showing damage. Once burned by an Into the Garbage Chute your opponent will be wary not to fall into that trap again, which is why it's a one-off.

WAY OF THE LIGHT can really go both ways. Against villain decks it's amazing! Remove any die! Against hero decks it will still be able to remove approx. 40% of the dice - although no character dice - but quite a few powerful upgrade dice as well as supports. IF against all odds that heroes will dominate the meta, you'll probably need to look for alternatives.
6. TECH CARDS:I wanted to try out several "funky" tech cards. Some of them are going to be cut, but I'll just go through them for a bit of insight into my sick mind ... 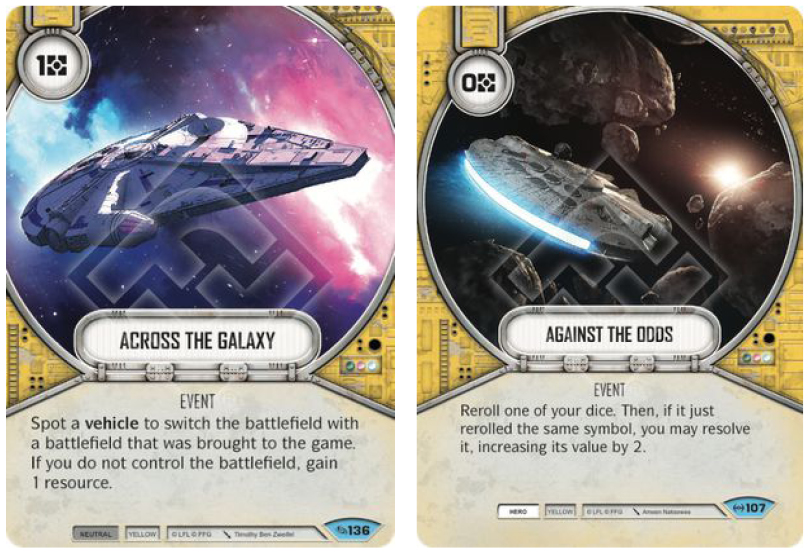 There are a few very disruptive battlefields out there, and while you are probably rarely going to claim, ACROSS THE GALAXY will allow you to get rid of those battlefields and replace them with Weapons Factory Alpha - and usually for free. Battlefields like Jedi Temple, Frozen Wastes, Rift Valley, etc. are so annoying that offering yourself a way out of them could be useful.

AGAINST THE ODDS is a risky addition to supplement Anakin's die. It has 50% Resource sides and with Against the Odds 50% chance of netting you 3 resources. Worth it? Not sure ... 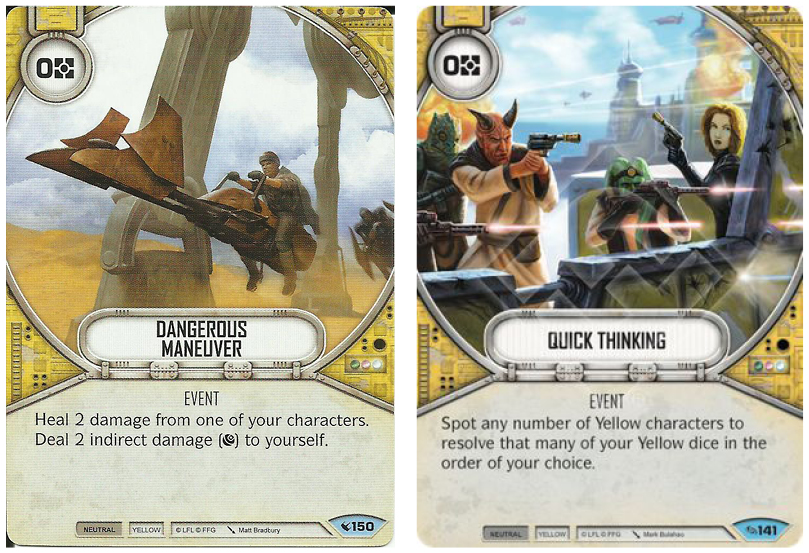 DANGEROUS MANEUVER is your safeguard against Backup Muscle and Relentless Pursuit, both cards that have been in a number of powerful decks in the Way of the Force meta. Being able to essentially move damage around your characters or absorbed by Shields can be exactly what you need to keep a character alive for another round.

QUICK THINKING
In most decks it would be regarded as the poor man's version of All In, but in this deck it is ALMOST as effective and it costs 0 resources. You get to resolve up to 3 dice, which could be a 2 Focus into resources and/or damage. Great way of bypassing mitigation or present lethal damage to an opponent's character.
7. BATTLEFIELD:

Yeah, you guessed it: WEAPONS FACTORY ALPHA ... what else! Control of the Battlefield in conjunction with Lando's Power Action means you can play a Millenium Falcon for 4 resources round 1. Can't beat that!
8. MULLIGAN OPTIONS:Getting an early Millenium Falcon can be key to your game, but a Pirate Speeder Tank is also pretty dope. Start shaking your money maker and get into the fray!

The Smuggling Freighter will help you produce more cash while an early Hunker Down can pay off big time! Use Anakin for Into the Garbage Chute if needed. If you play against another vehicle deck I might consider keeping Double Down in my opening hand to grab those resources off their Chance Cube.
9. DECK LIST (VER.2): 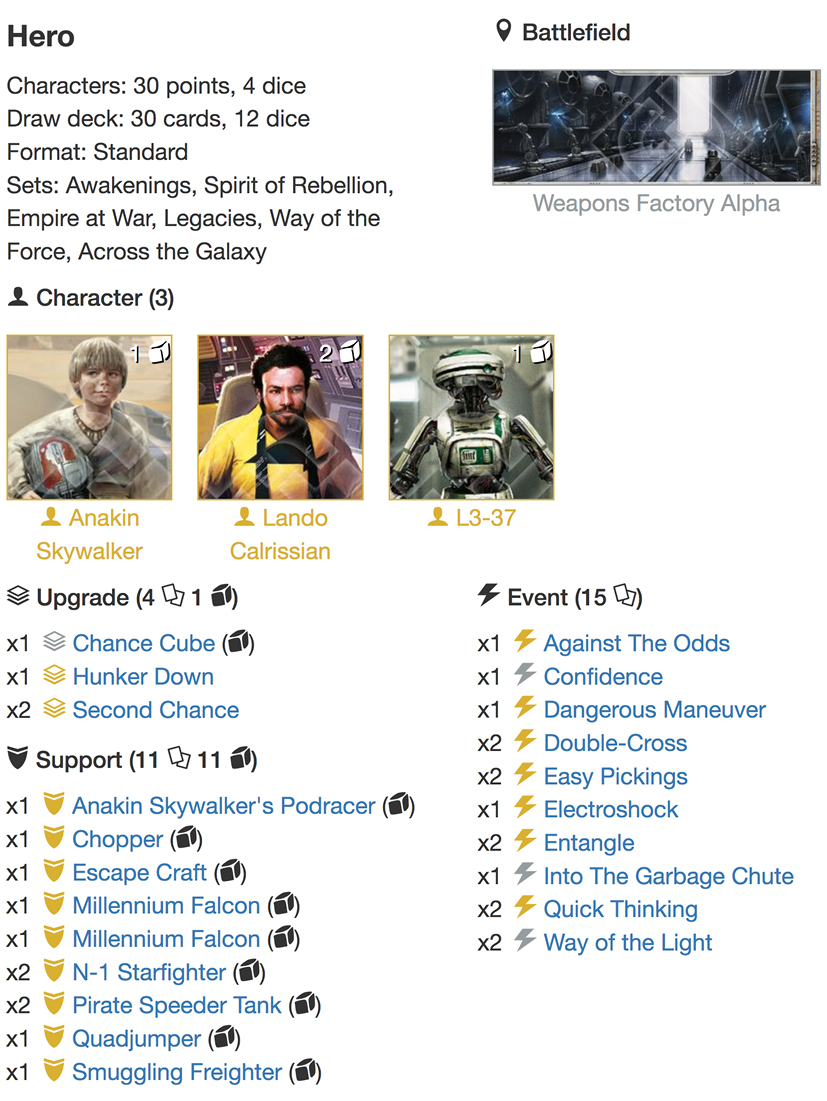