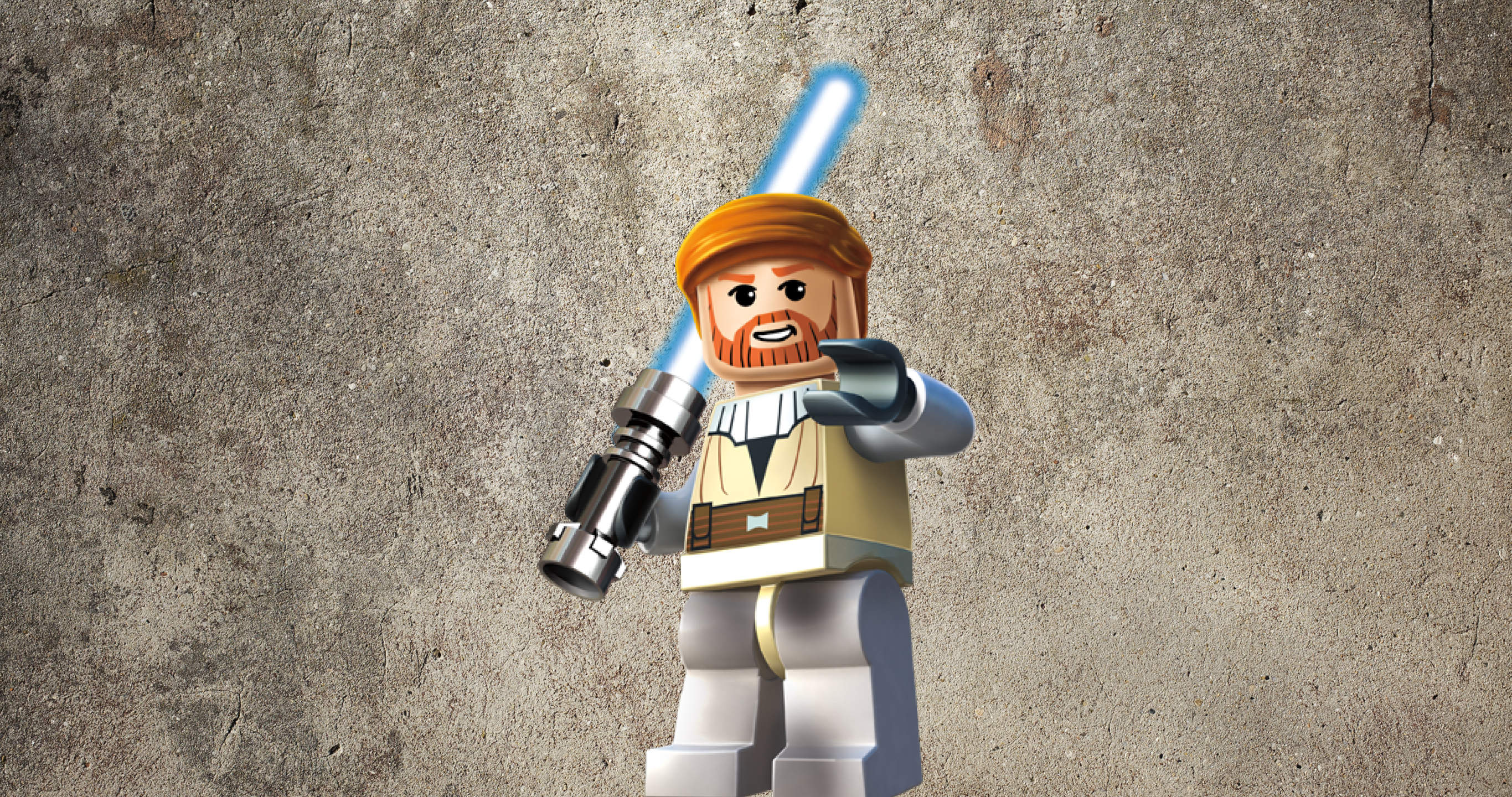 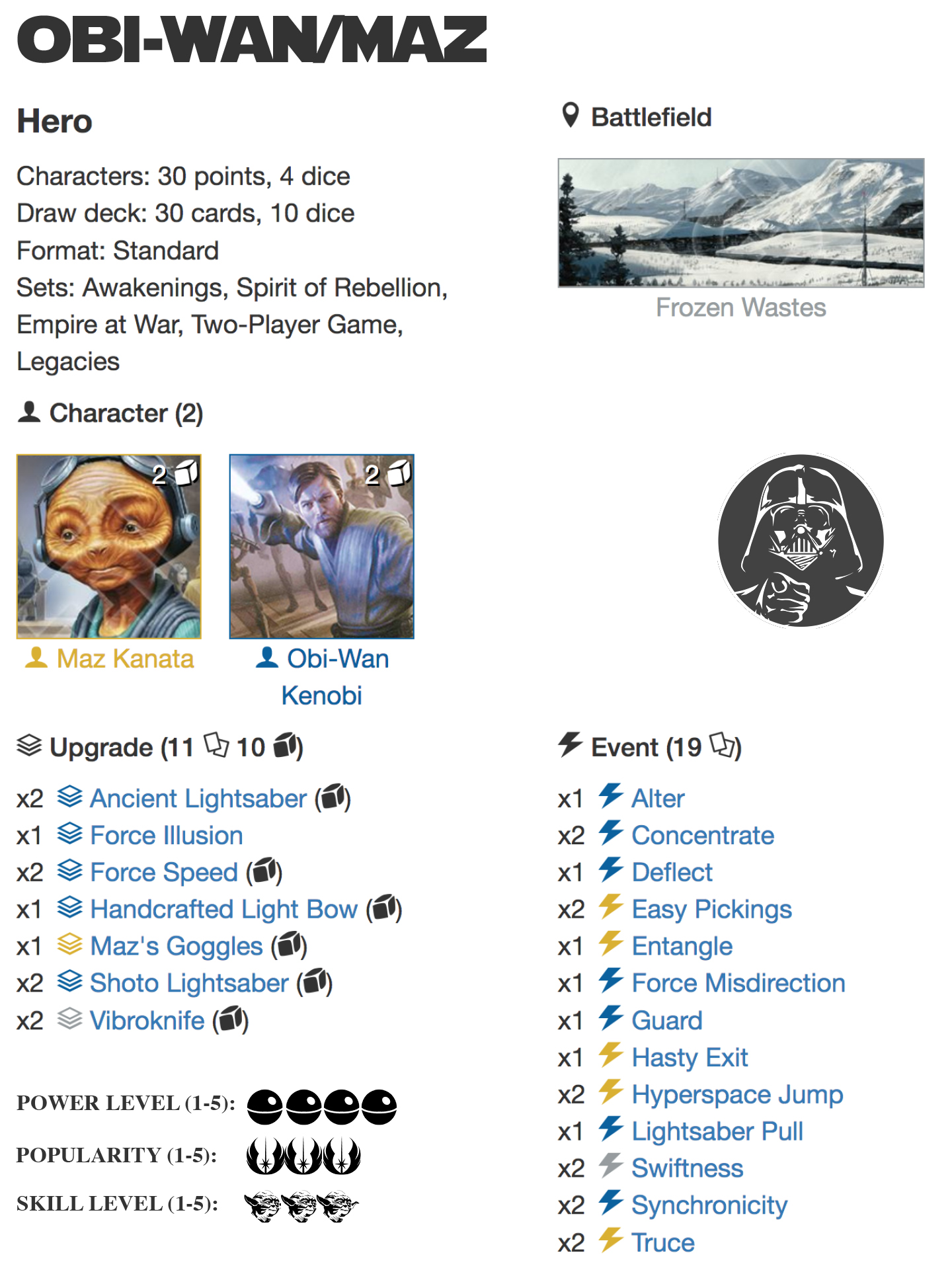 1. CREDITS:This is the deck that was piloted to 2nd place at EUROS 2018 by Dimitris Papadogeorgopopoulos (you get a prize if you can pronounce his name). There are a plethora of fantastic Obi/Maz decks out there, one of the better versions was played at Worlds by Luke Magnusson from the Destiny Council, but Dimitris’ version really caught our attention.

We have asked Dimitris to review the article, and his comments, where applicable, are added in [brackets] in the article itself.
2. GENERAL COMMENTS:Alongside Sabine/Ezra, arguably the best Big/Little deck out there, you find Obi/Maz. This version of the deck is even more archetypical as it pours all the tricks into Obi-Wan Kenobi. Big/Little decks can be tricky because they rely so heavily on one character to perform as opposed to middle/middle decks (i.e. Rey/Aayla or Boba/Seventh), which in turn means that the deck has to not only find ways to improve the performance capabilities of the main character (the big), but at the same time be able to protect that character.

[Dimitris: The deck was built in order to have virtually no bad (counter) match-ups. It is vital for your game plan to kill your opponent's main character by round 2-3.]

Obi/Maz does have a lot of tools at its disposal to bolster its winning strategy as the blue/yellow combo opens up for great protection cards and utility cards to boot.
3. CHARACTERS 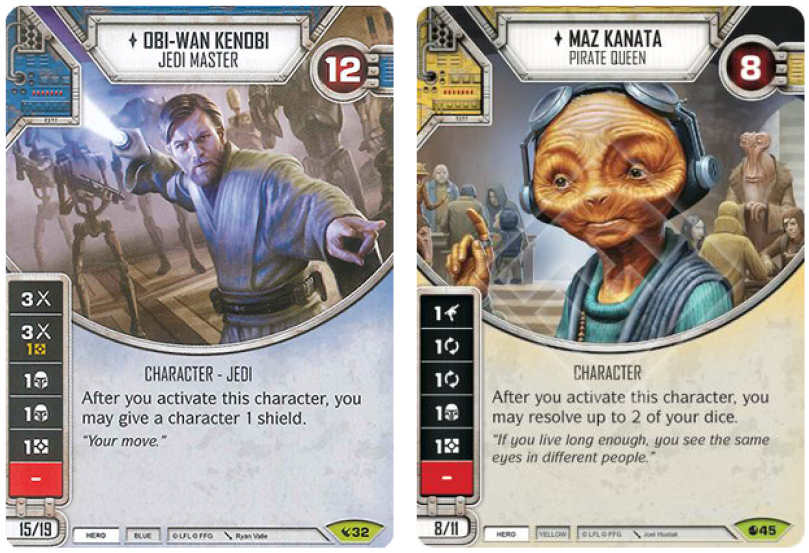 Obi-Wan Kenobi is the character in the game with some of the best inherit melee damage sides right off the bat. Sure, the 3 melee for 1 resource can be troublesome, but yellow has several ways to solve that problem. With Maz Tanaka as the sidekick, the deck firmly positions itself to be the fastest deck in the format (as of the Legacies expansion), which also explains the choice of Frozen Wastes as the battlefield.

Obi can deal incredible amounts of damage with very few upgrades. Obi with a Vibroknife is scarily efficient and can kill off characters in a heartbeat, while two Shoto Lightsabers to go with Obi’s activation trigger is one of the tankiest combos in the game, and will outlast all but the most offensive decks in the game.

Because of the division of labor between Obi-Wan and Maz, especially if your opponent targets Maz first, Obi is effectively a 20 health character and add into the mix whatever number of shields that Obi can manage to generate. The great weakness of this build, and even more so than its mono-colored counterpart: Sabine/Ezra, is that whenever Obi is defeated so are you! Despite this Obi/Maz is arguably emerging as the strongest deck of its type out there.
4. UPGRADES & SUPPORTS:This deck is hard hitting and efficient - and it is built for speed. You are playing the action-cheating game BIG TIME!

[Dimitris: The number of upgrades is kept at a minimum because the deck doesn’t really need upgrades to deal damage, Obi’s dice alone are sufficient to kill a character.]

You have 7 weapons upgrade + 1 Lightsaber Pull. 8 weapon upgrades feels a bit short stocked, but Dimitris' results speak their own language. You most likely need to hard mulligan for an upgrade, and I saw how much it hurt Dimitris not drawing into upgrades in some of his games at EUROS 2018.

VIBROKNIFE:
LOOOOOVE IT! This is, offensively, the best upgrade card in the weapons arsenal of Obi. Nothing is as scary as Obi-Wan Kenobi running at you with a Vibroknife! The ability to easily inflict 5 unblockable damage is a character killing setup. AMBUSH ... right, that works well with your game plan.

SHOTO LIGHTSABER:
If the Vibroknife is the strongest offensive upgrade, the Shoto package is easily the strongest defensive upgrade (alongside Force Illusion). The ability to tank 3 shields pr. activation (2 from Shotos and 1from Obis trigger) is one of the strongest in the game. There are not a lot of decks that can, consistently, deal more than 7 damage/round, which means that you could effectively reduce your damage taken to a ridiculous 4 damage/turn.

ANCIENT LIGHTSABER:
Only weakness of the Ancient Lightsaber is that its best side, +3 melee, makes your dice a bit easier to Easy Pickings, but other than that it’ll work wonders with Obi. Because of the nature of the Big/Little build, the healing ability is going to boost Obi’s already considerable staying power.

[Dimitris: Ancient Lightsaber is definitely not a preferred weapon against yellow hero decks (damn Easy Pickings), and it is usually played (whether overwriting or paying its full cost) for the heal action.]

HANDCRAFTED LIGHT BOW:
A single copy of one of the strongest cards in the game. There are good arguments for including other 3 resource upgrades, but Handcrafted Light Bow is an immensely powerful weapon - in particular in the current shield heavy meta - but you are not too reliant on your melee sides (you are only playing 1 Guard and 1 Force Misdirection, while Maz’s ability makes the bow super-consistent).

FORCE ILLUSION:
As in all our deck analyses, Force Illusion is not to be regarded as an upgrade, but rather as a mitigation card that can unfortunately be vandalized, but other than that it is pretty damn reliant. Do NOT let yourself get trapped in playing the Force Illusion out of sequence. Obi is waaaay to important in this deck not to protect properly. Play it when you have the chance!

FORCE SPEED:
What is there really to be said about one of the best cards in the game, if you ask Mads Utzon it is “the Black Lotus of Destiny”, and while it is also one of the most expensive cards in the game ($$$), it is invaluable in a deck that relies so heavily on speed, and can resolve its dice at a crazy pace.

MAZ’S GOGGLES:
There are so many uses for Maz’s Goggles. It allows you to remove events (special), it gives consistency (2 focus sides), and enables your board state (2 resource sides). Even if its “spot yellow” requirement is a prohibitive element, it is still really powerful. Remember that it does not have to be played on a yellow character.

5. EVENTS:The event suite is a fascinating mix of mitigation (7 true mitigation cards, and 1 piece of pseudo mitigation: Alter), tech-cards (11 cards). This selection really reveals the deck as a trick-deck. It gravitates around Obi and he, and him alone, is what makes this deck tick.

The battlefield Frozen Wastes is essentially also another free piece of mitigation every single round. The deck has 2 free mitigation cards, both dependent on sequencing (Guard and Hasty Exit), 4 cards that cost 1 resource (Easy Pickings, Force Misdirection and Deflect) and 1 card at a two resource cost (Entangle). It relies heavily on “Spot” cards, which might expose it, but it really falls back on the good ‘ol saying: “The best mitigation is to kill a character”.

[Dimitris: DEFLECT was included mainly to protect against vehicle decks as these can be a difficult match-up for Obi. It can act as both mitigation and a surprise damage dealing card. It did not see much play in decks at EUROS 2018, and it often took my opponents by surprise.]

[Dimitris: ENTANGLE. Main reason for including it was to effectively stop Yoda/Hondo and Boba’s early rolls. Both Yoda and Boba Fett can have rolls early game that you really need to stop. Another benefit of Entangle is that it cannot be removed with Friends in Low Places.]

[Dimitris: GUARD is a one-off, simply because you don't have too many melee dice and I often found that using them for mitigation would hurt your own game plan too much.]

[Dimitris: FORCE MISDIRECTION is another one-off, and while it can be a lifesaver against melee decks it is almost useless in quite a lot of other match-ups. I actually rarely played it].

[Dimitris: ALTER/CONCENTRATE are your damage out of hand events, they combo with Force Speed and Swiftness. While Concentrate is cheaper, Alter is much more versatile, and the latter can be used as a pseudo mitigation card and is not affected by Friends in Low Places. SWIFTNESS is the second most important card in the deck. It can be used to play the main combos with Alter/Concentrate but in general it adds loads of tactical options, i.e. Using it to play double Synchronicity on a character protected with Shields and Force Illusion is a lethal play.]

SYNCHRONICITY:
In between Obi’s dice and your upgrade dice you should reliably be able to set up a Synchronicity whenever you draw it. The ability to carve straight through shields and Force Illusion is just majestic. Even Maz has a Shield side.

HYPERSPACE JUMP:
This card is a killer against vehicle and midrange decks. Both of these deck types take time to setup their kills, but hits HARD when they finally do. You on the other hand are an in-and-out deck. You resolve fast and kill fast. Hyperspace Jump is also the reason why you can consistently choose your opponent's battlefield, start with the 2 shields, and still get benefit out of your own battlefield after the first jump!

TRUCE:
Truce enables so many cards in your deck: Swiftness, Concentrate, Alter, Hyperspace Jump and the list just goes on ... It’s the Ambush that makes the card shine, and you have all the means at your disposal to make the best of it.
6. MULLIGANS:You want to see a weapon upgrade (preferably Vibroknife), a Force Speed, mitigation and preferably a tech-card in your starting hand. The 5th card is a flex spot.

[Dimitris: Your ideal opening hand consists of Force Speed, one of the yellow mitigations (Easy Pickings, Entangle) and one upgrade which is to be played at the end of the round if possible. Alternatively you want Maz's Goggles].
7. ROUNDING OFF:There are so many possible builds for this deck, and while this one is not as flexible and open-ended (and maybe not as suited to take on all-comers) as some of the other variants out there, it seems to build on the strengths of the deck, which we believe to be a wining-strategy.

There are some card omissions in the deck that might surprise a lot of players: Running Interference, Maz’s Vault and Friends in Low Places amongst others, and maybe even a vandalize, but this deck is all about speed and tricks and you simply don't have time for all those shenanigans - even if you’d love to see some of those fan favorites in there!