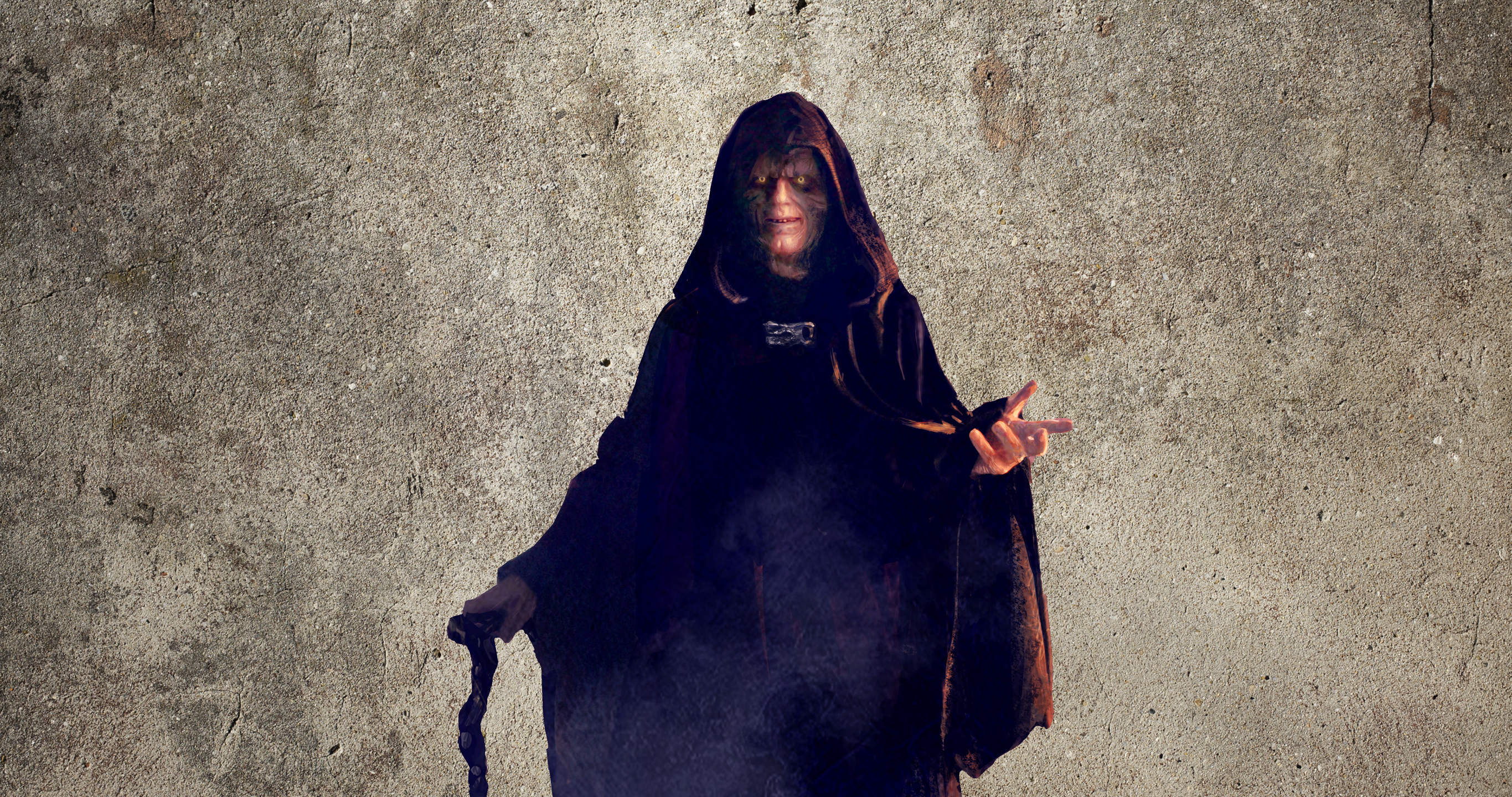 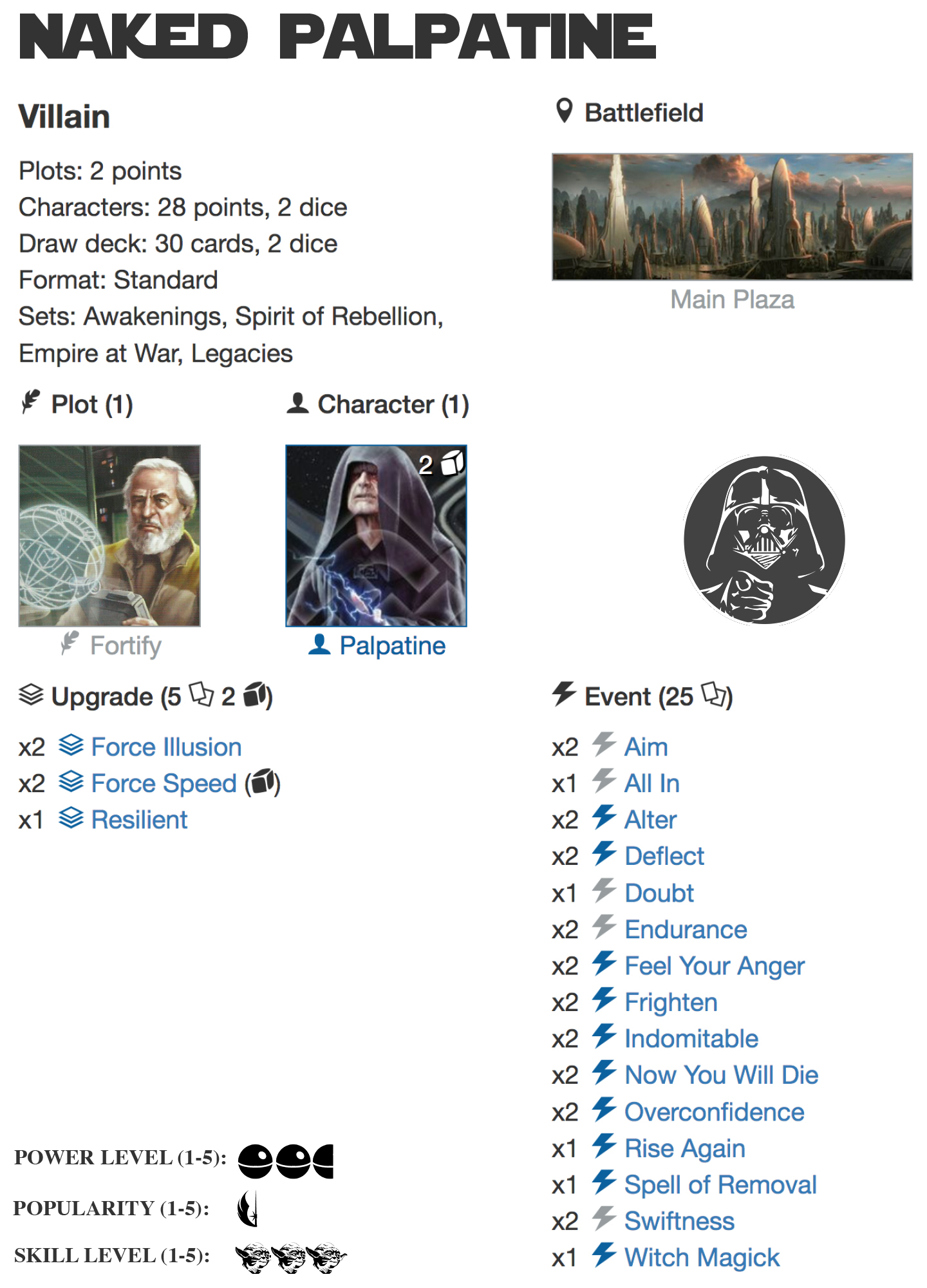 1. CREDITS:This deck analysis has been written by Andrew Eyles for the YOUR Destiny website. Andrew took the deck to top16 at EUROS 2018.

This is my take on the “Naked Palpatine” deck made popular by Monks Gaming Battlefield.

Another version of the Naked Palpatine, piloted by Jeff Jeakins, took top8 at Canadian Nationals 2018. (the Quarterfinals was recorded and published by VTTV Live). 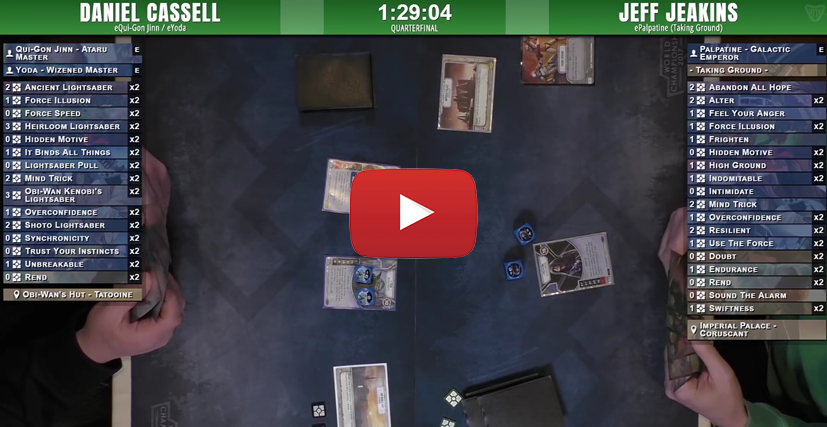 2. GENERAL COMMENTS:The deck focuses on a full mitigation package along with Force Speed plays and Resilient to get the most out of Palpatine’s 2 dice.

You will more than likely be starting with 3 Shields (1 from Fortify and 2 from choosing your opponent's Battlefield). If you do win the roll off for initiative you will find a lot of battlefields that are just as good for you as they are for your opponent (i.e. Obi-wan’s Hut or Moisture Farm). You will be claiming before 95% of decks, so most opponents will not give you access to your own Battlefield as it can be quite destructive, both capable of healing and "dealing" (moving) damage.

The way I run the deck is to get in early and out as quickly as possible. You need to have your dice in the pool before most decks to stop any mitigation that requires the opponent to have dice in the pool, i.e. Guard or other mitigation that can hit multiple dice (a killer for Palpatine).
3. CHARACTERS:Palpatine is the Daddy of them all. Since he appeared in Spirit of Rebellion I have played him in all of
his guises: Holocron suite, with Holdout Blasters, Witch Magick Palp and now "Naked"
Palpatine. Because of the new plots, you are essentially starting with a 16hp Palpatine. 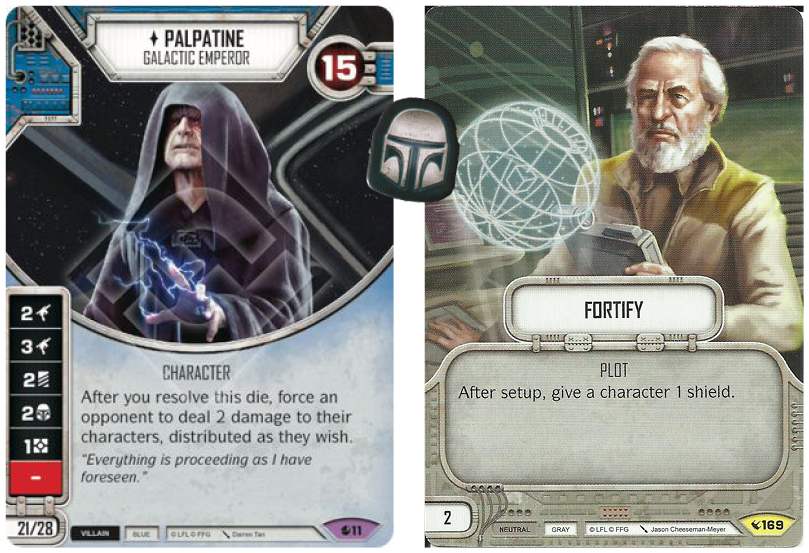 He is an aggro monster and in this version has a control package to match, boasting 25 events, 10 of which are mitigation of your opponents dice and 4 are heals (Witch Magick, Rise Again and 2 Indomitable) which between them could potentially be 8 hit points and 6 shields which raises the damage your opponent needs to inflict to a whopping 32!!

Games with Palpatine are quick, at EUROS, I don’t think I had a game last much over 15 minutes. If they do go past that you are probably in trouble!
4. UPGRADES & SUPPORTS

Well this should be short and sweet. Force Speeds are amazing on Palpatine so mulligan hard for 1 so you can get those Alter/Aim shots off for 10 damage without having to constantly rely on the Swiftness combo.

Resilient is nicer the earlier you get it. Being able to re-roll your big die back into the pool for potentially 5 damage is massive and soul breaking for an opponent. I have had multiple times where my opponent would Overconfidence my Palpatine dice only to roll one die into a 3 Ranged and Resilient the other die back into the pool for another 2/3 ranged. Endurance really goes in the same category as Resilient. Another way of protecting those invaluable Palpatine dice.

Finally, Force Illusions to mitigate up to 7 damage each but you are looking for the sweet spot of 3 or 4, so you don’t burn through your deck too much. Another card to break an opponent down. Late game these can be key, the end looks in sight before you pull this out and they know another round probably beckons.
3. EVENTS:The mitigation suite in this deck comes in 2 flavours – dice removal and shields/healing. Dice removal is key in Destiny and with this Palpatine build you have a lot of options.

Overconfidence is great for those massive damage rolls where you know you are going to remove at least half the incoming damage (I very rarely use it offensively as Palpatine's dice are too precious (MY PRECIOUS!!). Listen to Mads Utzon's talk about the "Overconfidence Battle" in the YOUR Destiny Podcast Episode 13.

Deflect is essential against most gun decks and that extra 1 or 2 damage can make the difference in getting a round 1 kill.

Doubt is free removal with a risk attached. I am more likely to use it as a last resort but it can come in clutch when needed.

Feel Your Anger is an essential card in most Blue villain decks but can be the most annoying card if your opponent refuses to roll blanks. My top16 games at EUROS was a case in point, Obi-wan refused to roll blanks both games. One blank die here or there could have turned the tide.

Alter is an under used card defensively. Sometimes you just roll fire and a well played Swiftness into “Alter” into “Feel your anger” can be massive.

HEALING AND SHIELDS
Indomitable is a great card for Palpatine, obviously – seeing an opponent crash damage upon your shields only to regenerate them immediately is another soul destroying play. Especially if you do it twice in a row!! Witch Magick in this deck is a 2 or 3 hit point heal every time and is just that little boost you need sometimes. So important, I would definitely add a second copy to the deck. I think I used Rise Again once in the whole tournament. Rise Again works well if you are using Moisture Farm as your Battlefield as you are generating plenty of resources, but in this version the 5 resources are a bit harder to come by.

TECH-CARDS
Swiftness is KING in this deck. When Force Speed fails you or just doesn't show up at all, Swiftness secures those lethal plays. Swiftness obviously makes Alter and Aim even better and the damage output is just crazy. I had 2 games where 2 rounds back to back Swiftness into Alter made what looked to be close games into a one-sided affair. 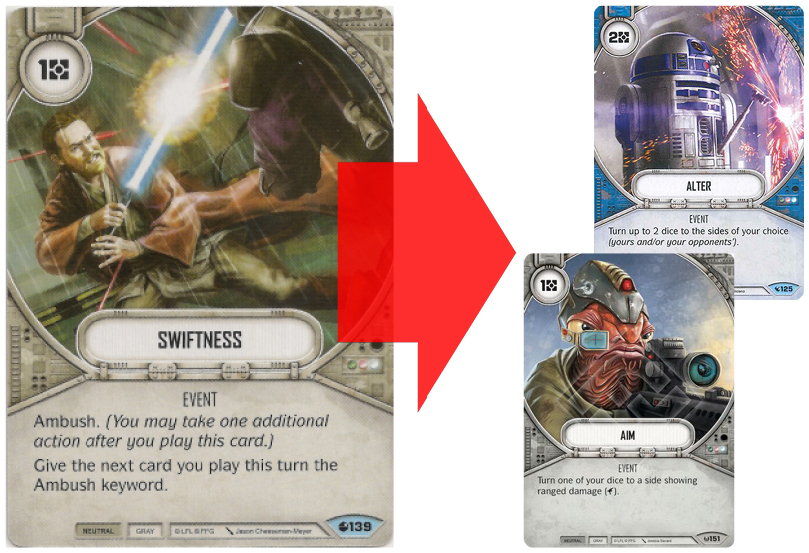 All In is great for the non-damage sides on Palpatine´s dice – the 2 Discard side on Palpatine’s dice is one of the scariest in the game. Rolling this and the 3 gun and being able to deal 7 damage and remove potentially 2 important cards is B I G. Frighten is just scary!! Ambush shield stripping with Palpatine's Indirect damage ability is bonkers. Frighten into Swiftness\Alter Mwhahahahahaha!!! 13 unanswerable damage.

Now You Will Die is another under-valued card but really works well with Palpatine. I had multiple times where I would hit the 2 Shield side with a fully shielded Palpatine. My opponent just assumes I will sit on this and wait for some damage to come through or re-roll it. Surprise out of hand damage is great: 4 damage (2 from the die side and 2 from Palpatine's ability) from nowhere can win you games.

5. CLOSING THOUGHTS:As said previously, this Palpatine build is ultra-aggro and needs to be played that way. Put your opponent on the back foot. Don’t be too worried about losing some early damage to get the discard play in. Remember first round they mulligan for the hand they have. 2 dice showing double discard is a scary prospect and it is still 4 damage!!

This deck definitely has its weaknesses. It does not like the ultra-quick “Hyperspace Jump” decks like Sabine\Ezra or the new hotness Obi\Maz. Most of the changes I would make to my deck would center around combating this type of deck.

Considerations would then be:

1) More single dice removal (Isolation, Hidden Motive).
2) Add more cheap healing (another Witch Magick to replace Rise Again).
3) Change a few manipulation cards (Use the Force for a Now You Will Die).
4) The addition of an Abandon all Hope against the “Hyperspace jump decks”.

Piloting this deck is like car racing with tires that have seen better days. You are always on the edge of destruction but most of the time you get round the corner and go straight for the win!!